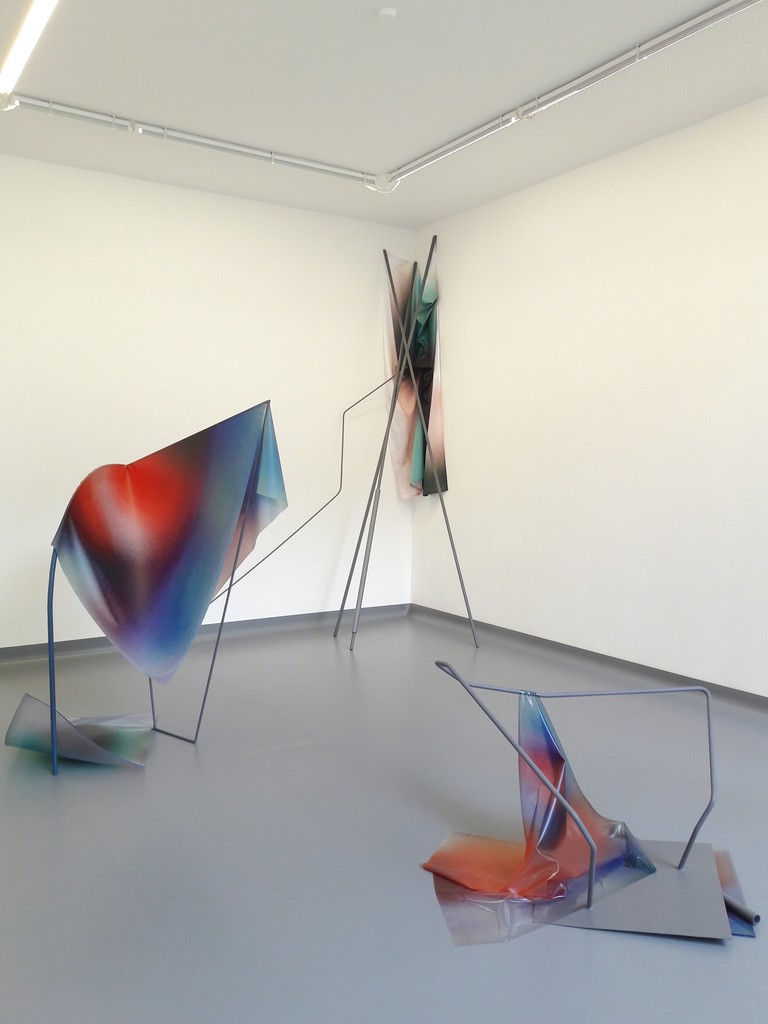 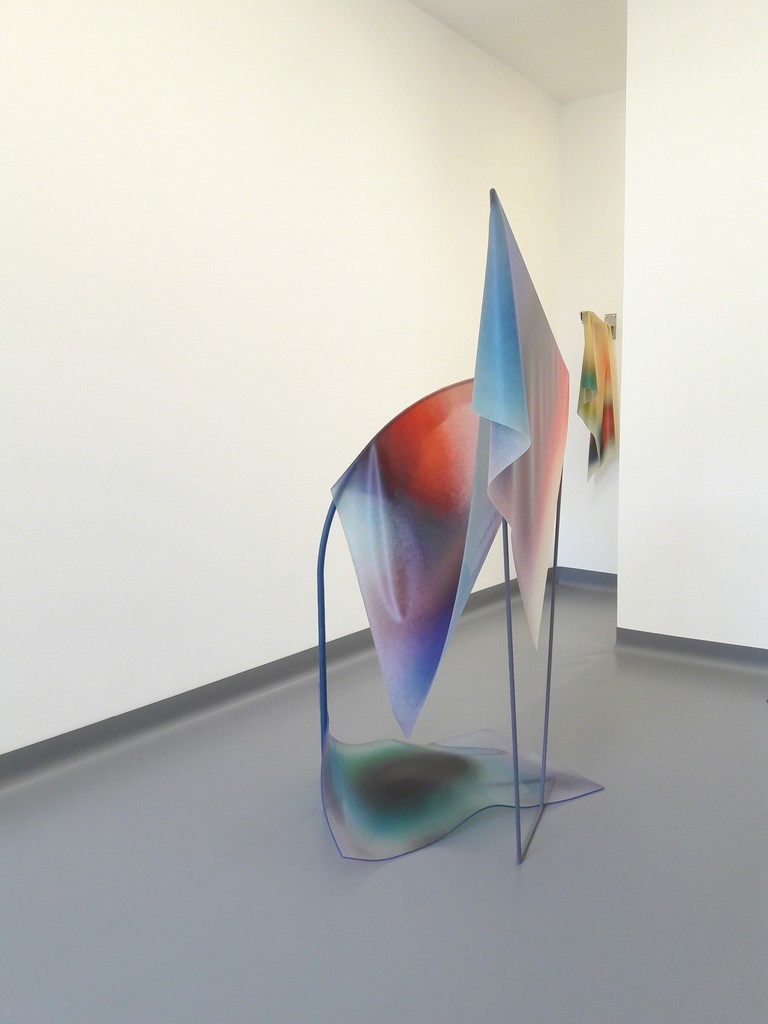 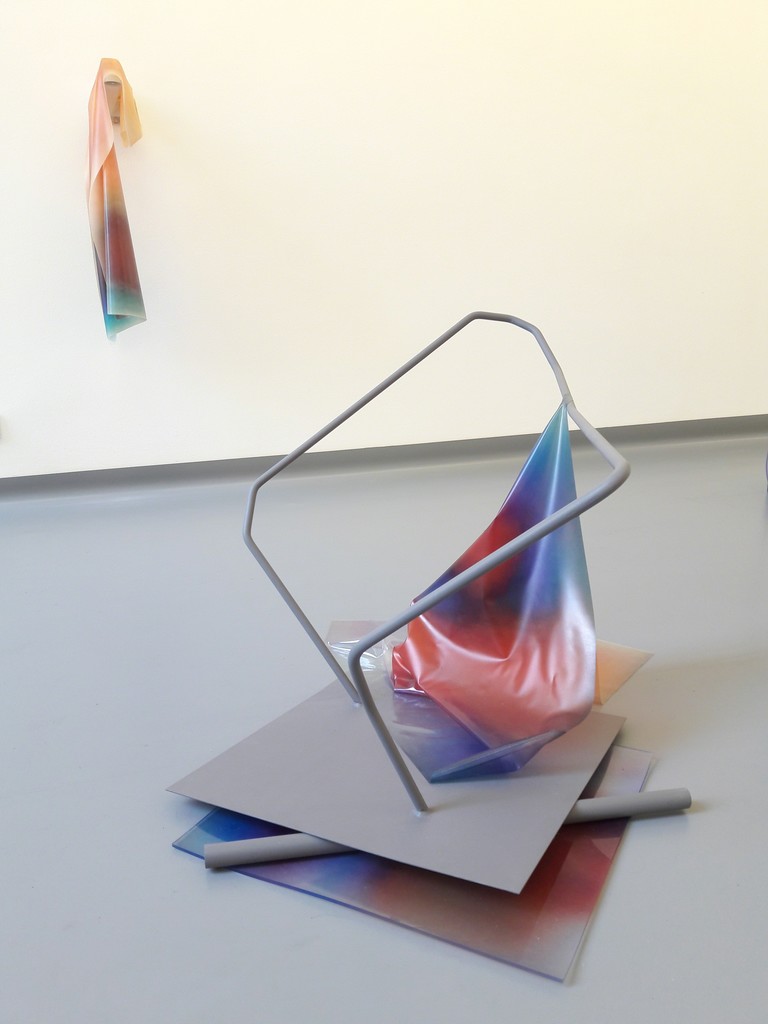 Kruithof’s most recent project #EVIDENCE, inspired by Larry Sultan and Mike Mandel’s book Evidence from 1977. Back then and way ahead of their time, Sultan and Mandel examined the authenticity of photography by manipulating its context. Nearly 40 years later, digital photography and its endless application on social media push this approach Kruithof started to research the Instagram accounts of 27 corporations, 15 government agencies and 11 institutions, all based in the US. For example, the Instagram feed of TSA (Transportation Security Agency) is one of the government agencies examined by the artist. There, she found neatly rendered sets of confiscated objects, mainly weapons, together with blurred identity cards of their holders. The images of these cards were later printed on material such as latex, PVC and vinyl and put together to form a series of sculptures titled Neutrals and Concealed Matter(s).
Carry on... is a screenshot montage showing firearms confiscated at airport security checkpoints all over America. The collage is the work of a TSA employee who posted it online; Kruithof manipulated the images in the collage by cutting out the firearms, thus removing all the evidence along with the violent aura of weaponry in
With the photo series, Screenshot-Montages she questions the value and meaning of images in promotional contexts that can hardly be understood as objective and reliable.
Born 1981 in the Netherlands, Anouk Kruithof is currently based in New York, Mexico City and Amsterdam.
Her work has been exhibited internationally at institutions such as:
Museum of Modern Art, New York; The Stedelijk Museum, Amsterdam; MBAL Switzerland; The Xiangning
Art Museum, Shenzhen China; The Center for Photography at Woodstock; Multimedia Art Museum in Moscow,
Erarta Museum, St. Petersburg; Culture and Arts Center, Daegu Korea; Capitain-Petzel Gallery, Berlin: KIT
(Kunst Im Tunnel) Düsseldorf; Temporare Kunsthalle, Berlin, Autocenter Berlin; ICP, New York; Capricious
Gallery, New York, Higher Pictures Gallery, New York, Museum het Domein Sittard, the Netherlands;
Boetzelaer|Nispen Amsterdam, FOAM Amsterdam; The Netherlands Photo Museum, Rotterdam; MARCA
Museum Catanzaro, Italy; MAMAC (Museum for Modern and Contemporary Art) Liege, Belgium, among others.

Anouk Kruithof is one of the five nominees of the Volkskrant Beeldende Kunstprijs 2016. She received the Meijburg Art Commission in 2015 and won the Charlotte Köhler Prize in the Netherlands in 2014. She has also received the Infinity Award of the International Center for Photography in New York in 2012 and the Jury Grand Prize of Festival International de Mode et de Photographie in Hyères in 2011.

Kruithof’s tenth artist’s book AUTOMAGIC will appear soon in print. It is a publishing collaboration between Anouk Kruithof’s publishing platform: stresspress.biz and the Spanish art book publisher Editorial RM. This artist’s book will be available at the gallery.