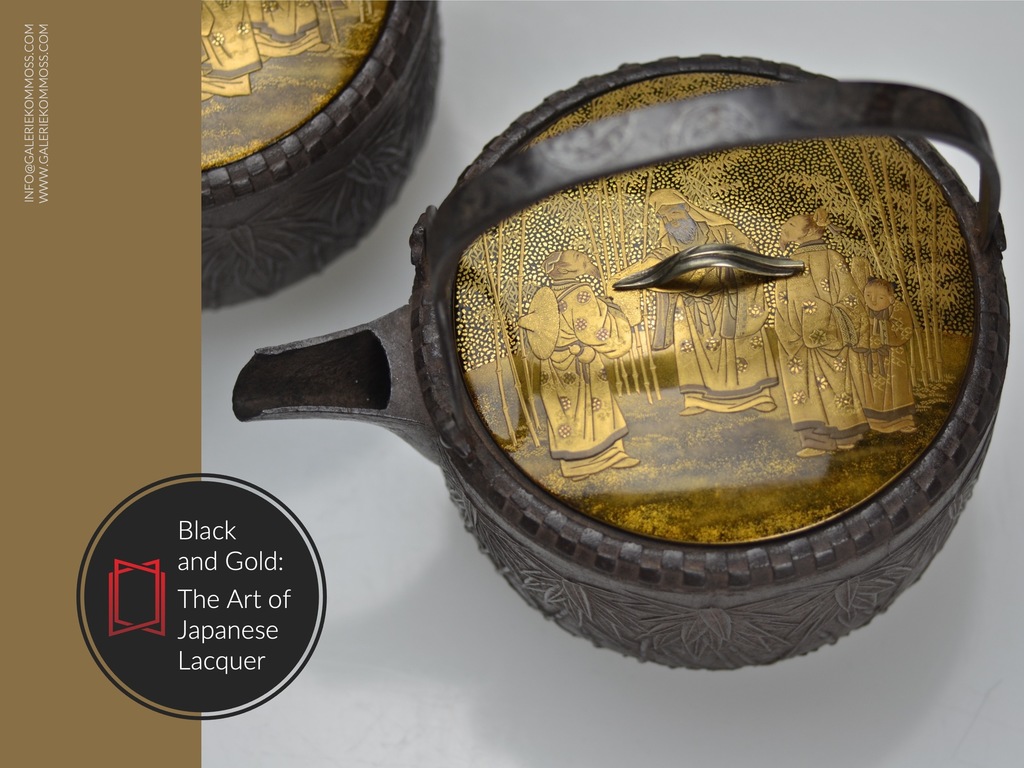 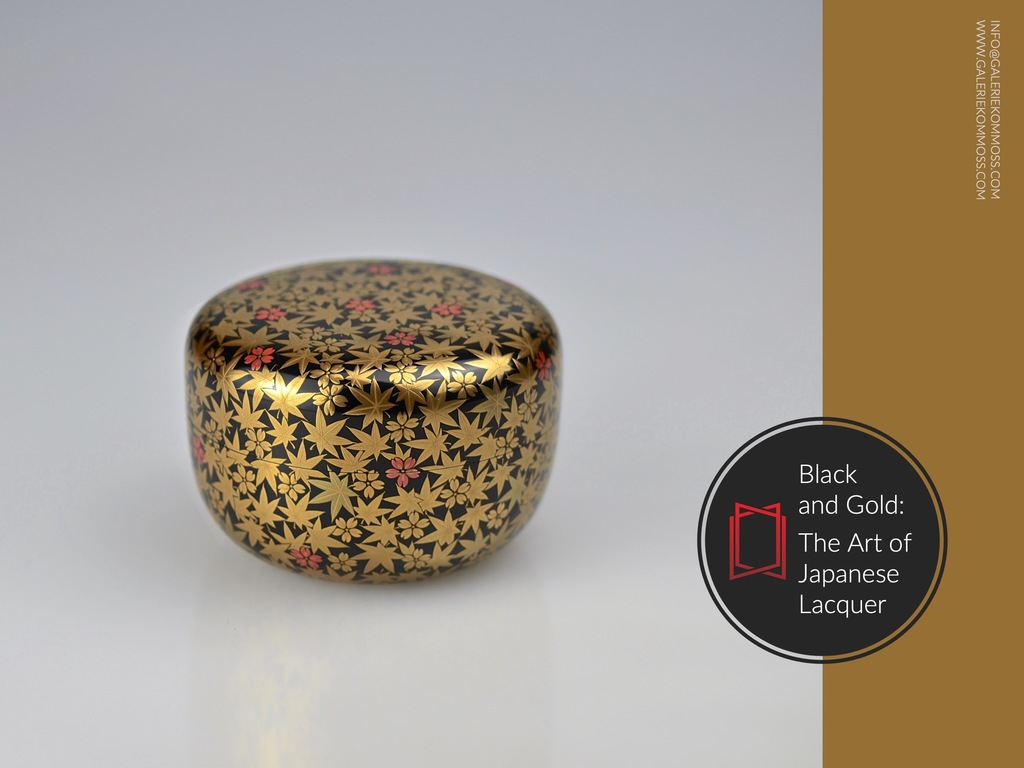 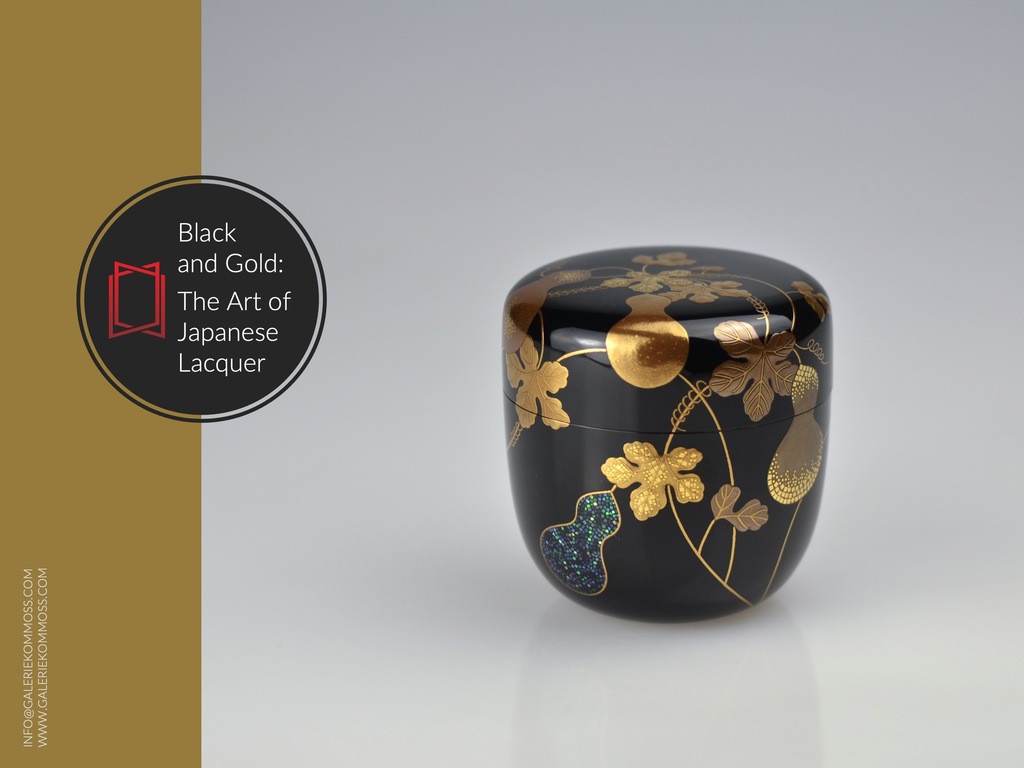 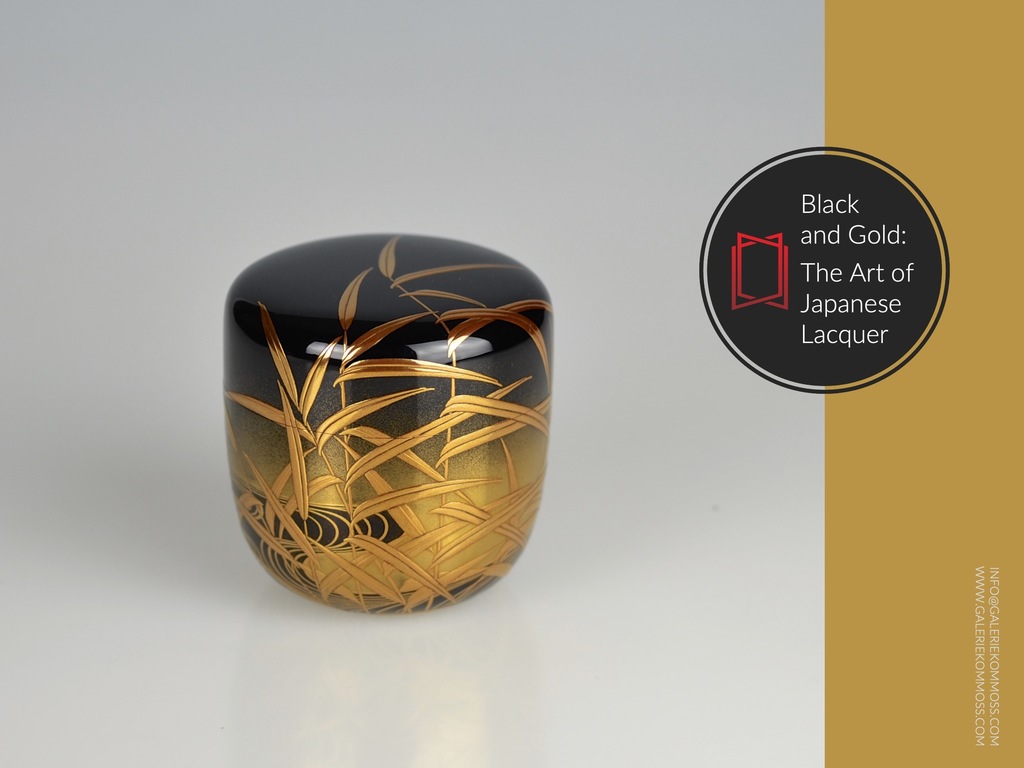 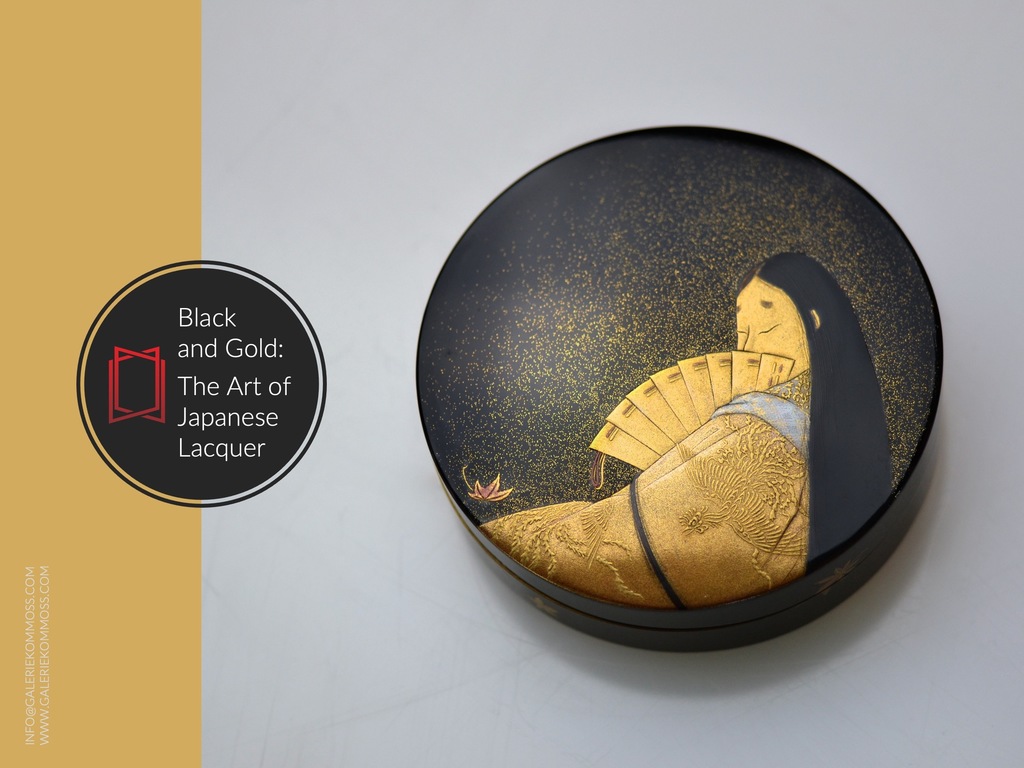 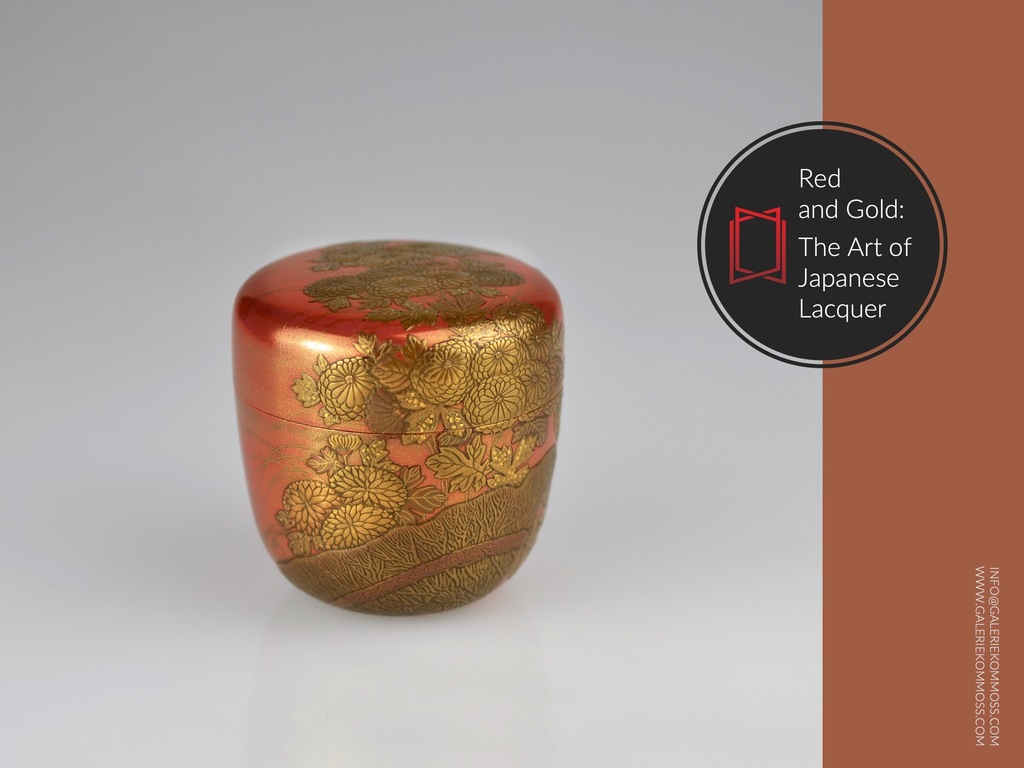 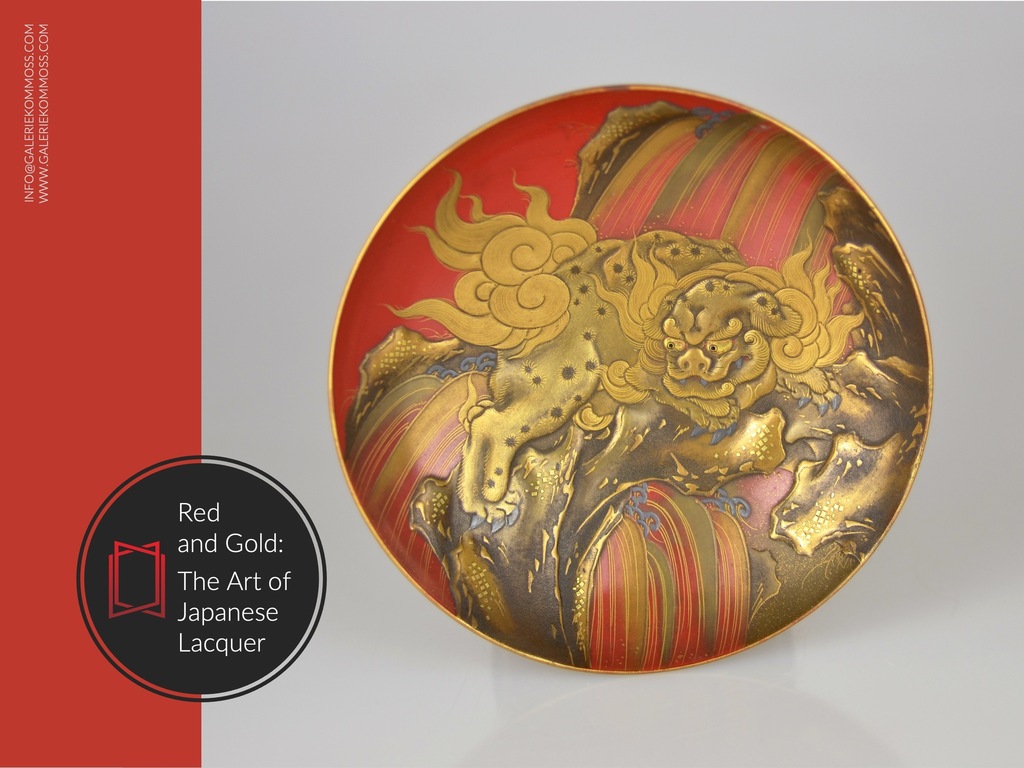 To enlighten the slowly fading winter, we decided to create this special exhibition focusing on unique Japanese golden lacquer works. The reason is easy to explain: The extraordinary precise details of the works bring so much joy to look closely at them while their vivid yet elegant colors are creating a splendid and impressive atmosphere in your home.

Most of the objects Galerie Kommoss are offering are tea caddies (natsume). They are easy to collect and due to their fluid, three-dimensional rounded shape one of the most complex forms for lacquer artist to design. Unquestionable, one of the greatest lacquer masters of the last century in designing tea caddies was Kawabata Kinsa V (1915-1999). His large tea caddy with river scene is one his finest examples of this genre. Reference works for Kinsa V can also be found in Alistor Seton's book Collecting Japanese Antiques, p. 260.

Other important masters here to name are Okada Hyōkan I (1904-1969) with his fantastic Taishō period golden-red lacquer tea caddy with chrysanthemums growing at a bamboo fence. While the Kinsa tradition is based in Ōsaka, Hyōkan was a Kyōto artist following the tradition of Kimura Hyōsai (1818-1885), founder of the Hyō-school (Hyō-ha), which is regarded as one the main schools of Kyōto lacquer (the so called Kyōnuri). Also Kyōto based is the workshop of Ippyōsai. Having some works of Ippyō Eizō (*1942) - Ippyōsai VII - in our current exhibition, his studio is already led by his daughter Ippyō Ryō, who has become the official 8th Ippyōsai. The recurring motif in their designs are gourds with vine, which is a symbol of prosperity and wealth as well as referring to their workshop's name "One Gourd Studio."

Despite the many tea caddies, there are also some different types of items in the exhibition, like a stunning sake cup with a design of a lion dog climbing a waterfall made by mid-Edo period lacquer artist Fusensai Shūshō. Shūshō is especially known for his lacquer designs on pillboxes (inrō), but some of his finest sake cups are also in the collection of the Edo-Tokyo Museum for instance. Another item to be mentioned here is a small lidded box for incense (kōgō) with a depiction of the famous Heian period court lady and novelist Murasaki Shikibu. The box was created and signed by Imaizumi Seishi, who was a Taishō and early Shōwa period artist from Tōkyō and has been board member of the Tōkyō Maki-e Lacquer Association in pre-war Japan. Some of his works are preserved in the Kiyomizu Sannenzaka Museum in Kyōto, that has one of the finest maki-e collections in the world.