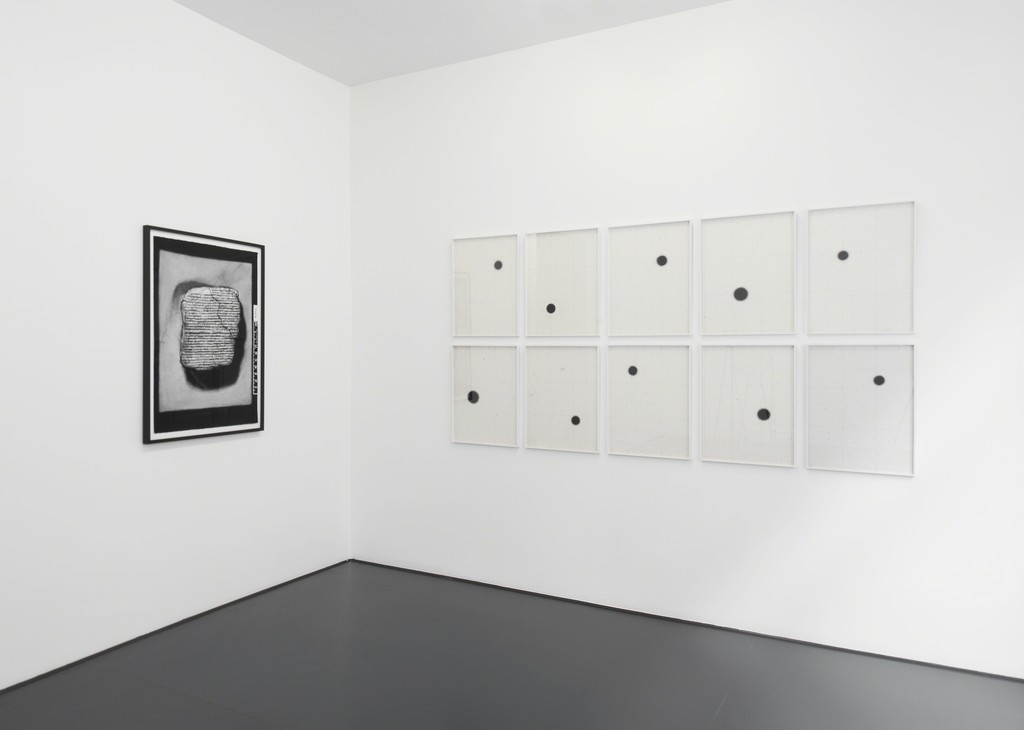 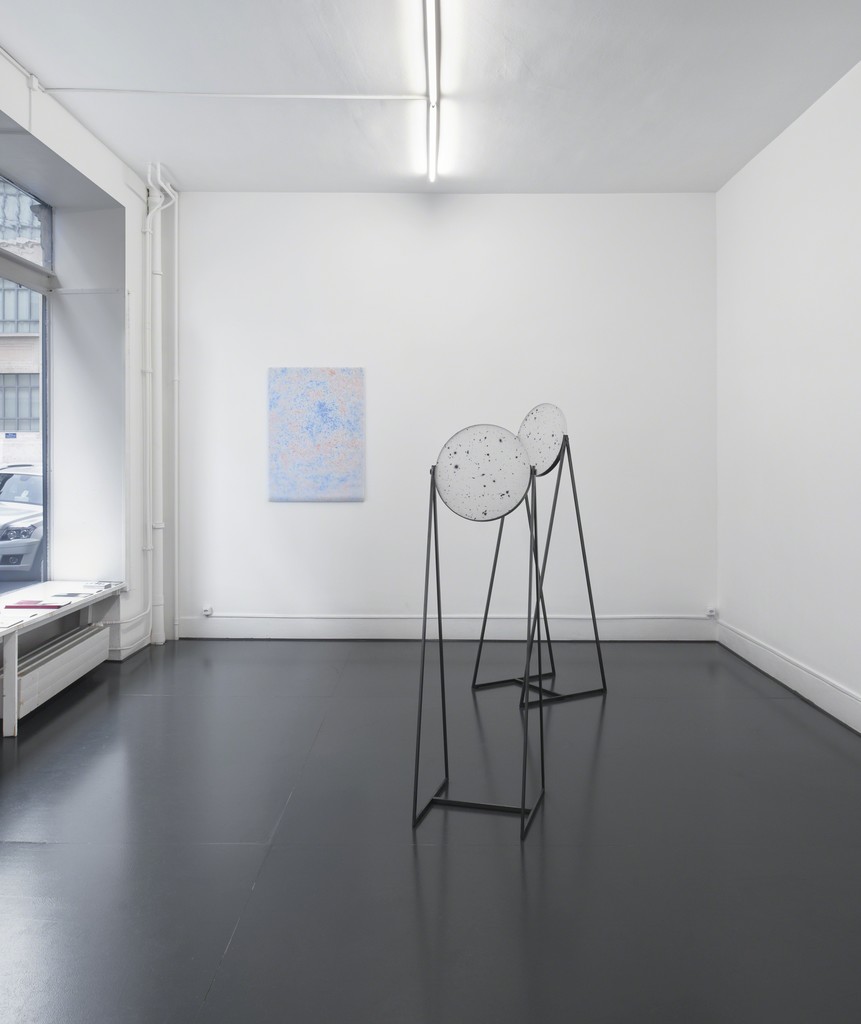 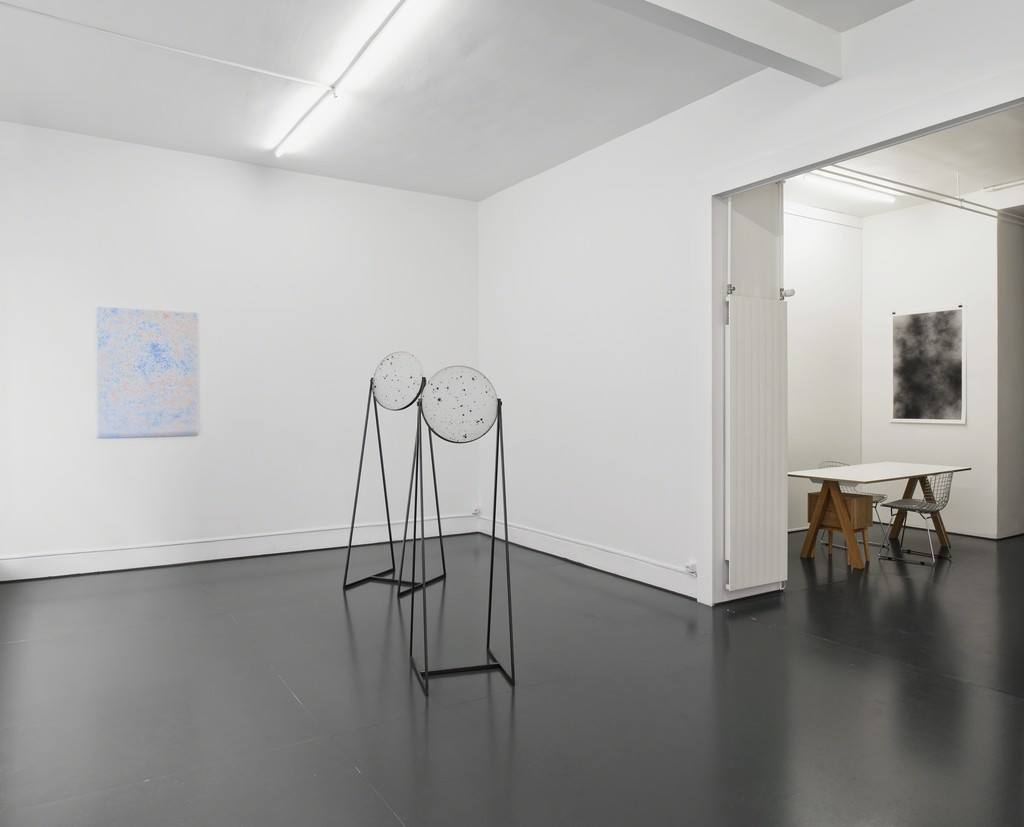 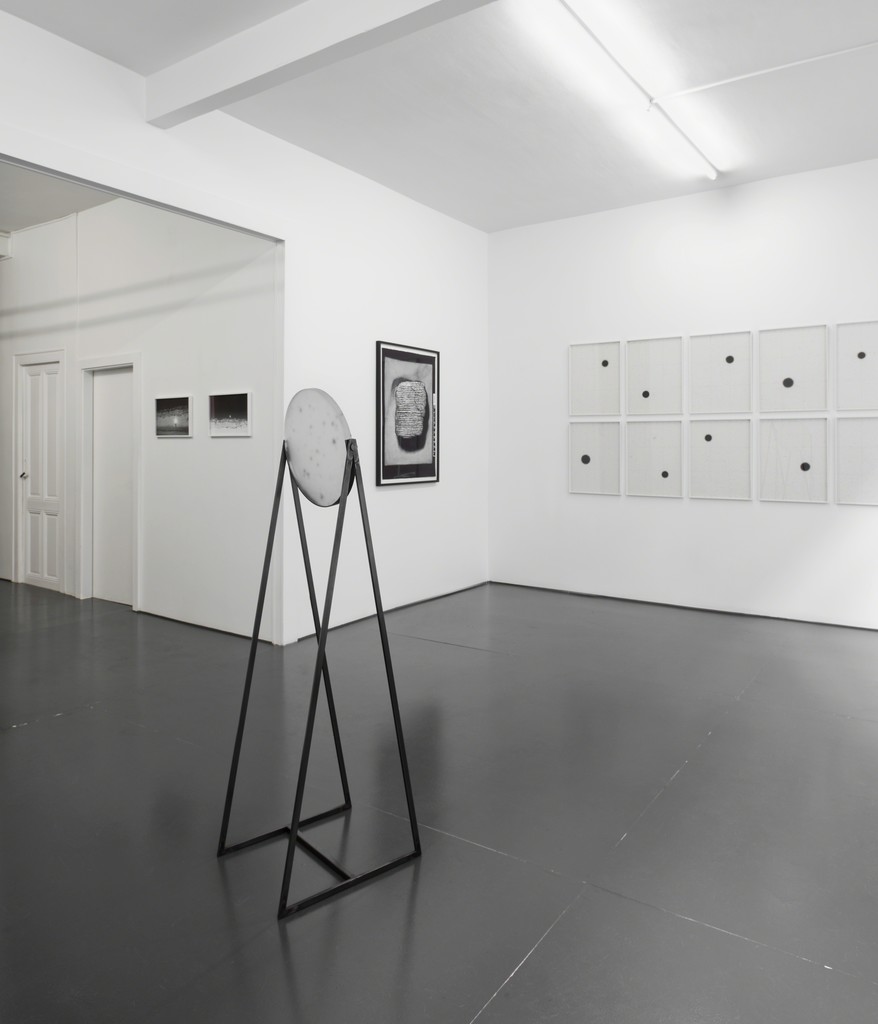 Cosmic impressions
“If I insert myself into the tube, if I let myself fall into the hole whereas I don’t know how deep it is, because the hole is as black as darkness or wax, and nothing assures me that there is an end, still less that it is the path to a destination.” 1
If we consider Caroline Corbasson’s work from a panoramic view, a constellation of shadow zones, black holes and rocky cavities emerges from a graphic and orderly universe as points of anchoring in re ection and doubt. Querying the real and its consistency with processes such as wear, alteration or effacement, the artists proposes new territories to explore.
These black beaches that, initially, alter the vision and use of objects, especially call up mental images to be formed. Drawn with coal, a group of black dots added by the artist on sky maps, in an asynchronous gesture, could suggest possible past or future cosmodramas (Anomalia, 2013). Eclipse (2014), a globe deprived of light from its star, entirely covered by mineral material, invites us to reconsider the familiar object in its structure and materiality. The subtle crossings between the drawing (two dimensions, lightness) and the sculpture (three dimensions, materiality), the document and ction, crisscross all the artist’s work. Between a protective envelope and a sign of thermal disaster, this gray graphite surface also evokes underground fossil resources and volcanic materials. In this sense, the images of craters, mines or a water hole produced by the artist display a dual determination: vertically exploring the world – its different strata – and experimenting with the attraction of the void.
When vision is opened up, as in a drawing of steep and enigmatic cliffs that is part of the Apart series (2014), the distant space offers nothing to see except for the horizon, which indicates a distance and a void that represents an elsewhere. The mechanism of vision, implying that when the eyes are concentrated on an object, it excludes a large part of the environment surrounding it, is regularly called on in the artist’s work. The video Plage (2013)
GALERIE LAURENCE BERNARD
accentuates this tendency by taking us along to a luminous convergence point located in a hollow. Here, the re ecting black matter encourages us to leave the surface and to literally plunge ourselves into the image. Inversely, in the work Blackout book (2013), the opacity of the illustrations contained in the work — that are spread out at — makes us attentive to everything that circles them and indexes them.
Measurement is everywhere in Caroline Corbasson’s work. The tools, old or contemporary, of the representation of the world that she seizes, show man’s irrepressible need to explore and know the world as a whole. Identifying and recording the whole of the universe and, hav- ing it “within arm’s reach,” is an undertaking that aims at making the world transparent and representing it from an omniscient viewpoint. Nevertheless, many faces of reality retain their opacity, either because they go beyond our knowledge or because they resist the sensorial experience of the world. Through gestures such as af xing monochromatic forms on images, the artist places, at the heart of her subject, this relativism, this gap between the abstract and intellectual perception of the world and its physical perception. These gestures create tension in the elements between guration and abstraction. In the same movement, the artist makes the global vision of the object impossible and opens a breach in the memory, charged with rebuilding the missing part and, in the imagination, which still remains the best tool for going beyond thought. (...)
The changes in scale and viewpoint in these exhibitions, from the detail of a landscape to the representation of an elusive space, unable to be located, extended or deep, invite us to both look at the world with distance while intensifying the experience of what connects us to it. The absence of represented bodies in Caroline Corbasson’s works favors participation in the participation in the spectacle of the cosmos while the viewer is asked to occupy the space in which everything is organized. In other words, to experiment with the feeling of the sublime.