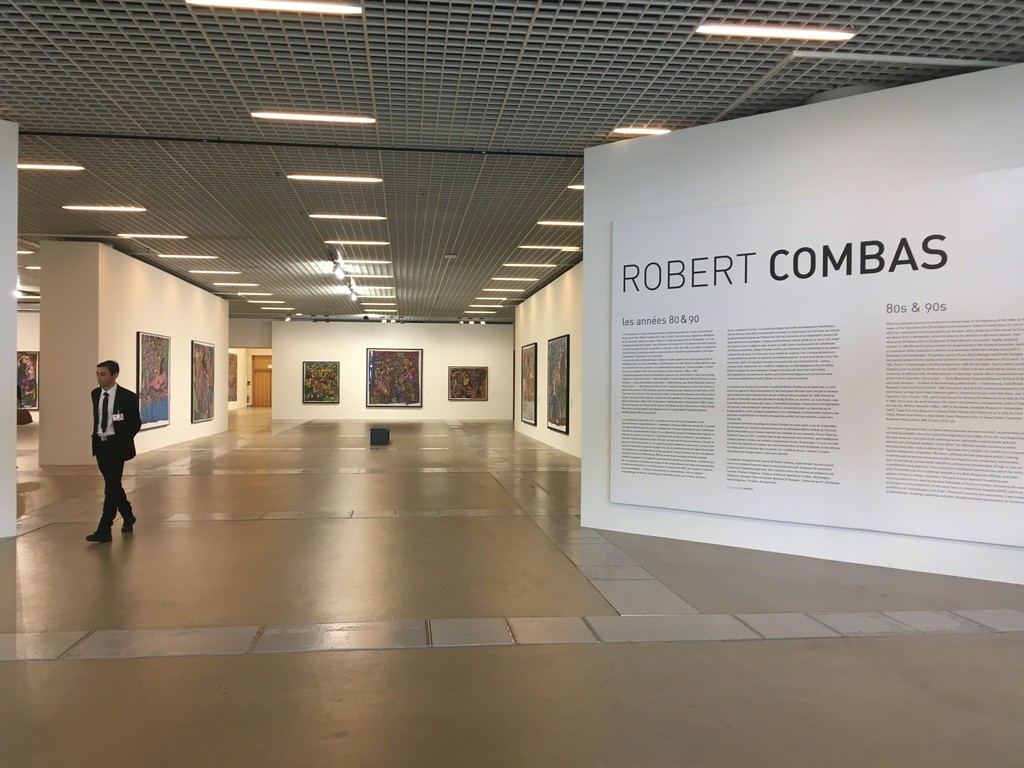 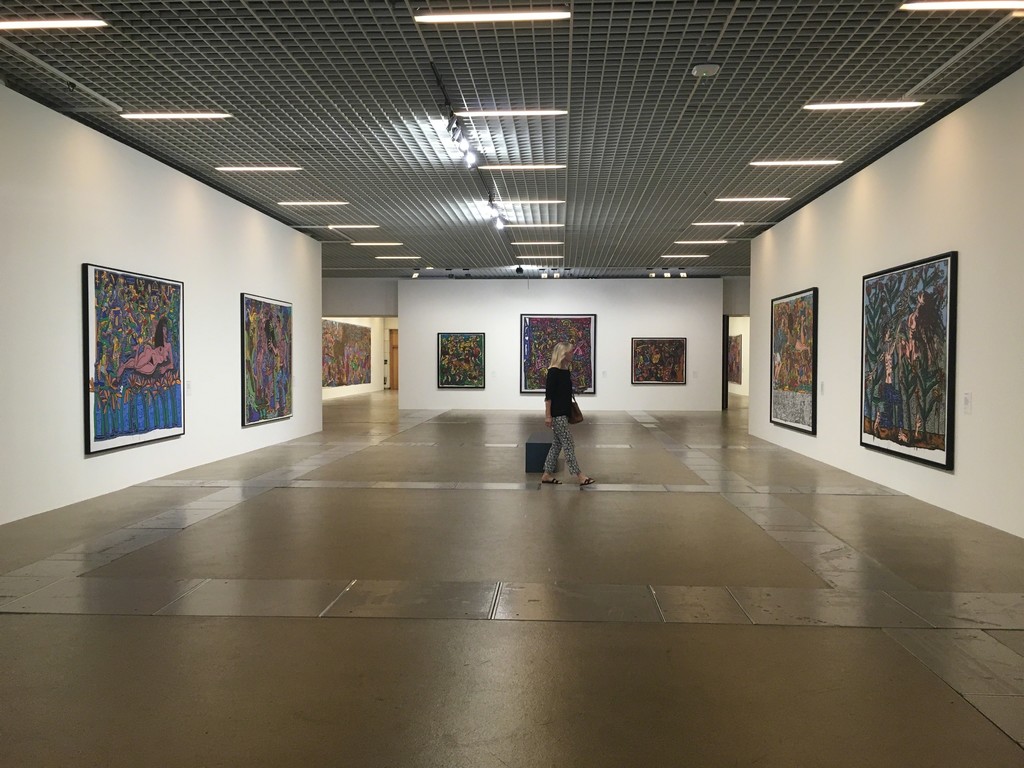 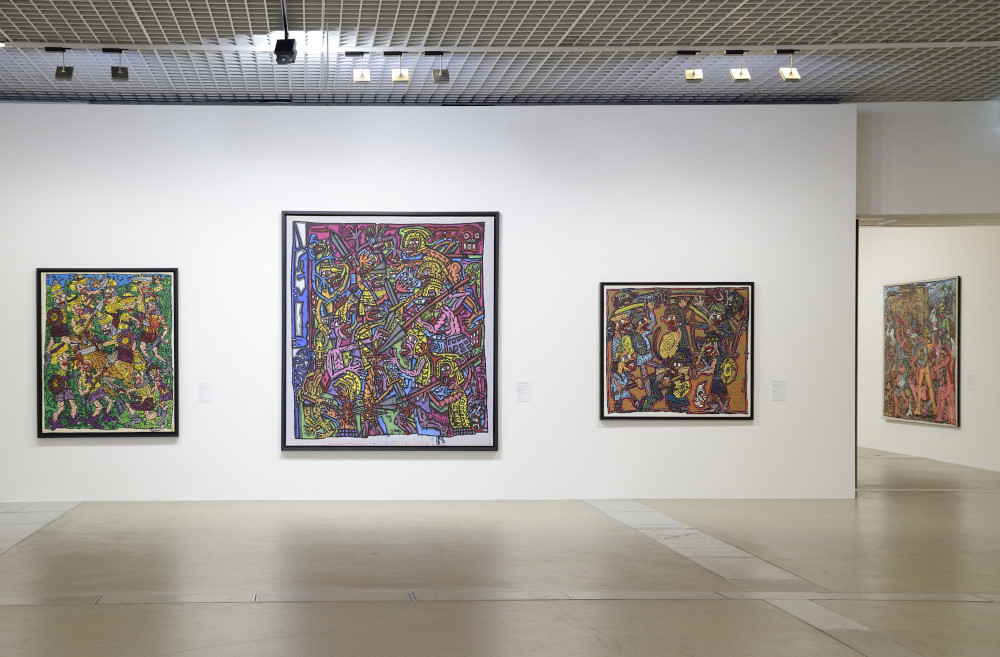 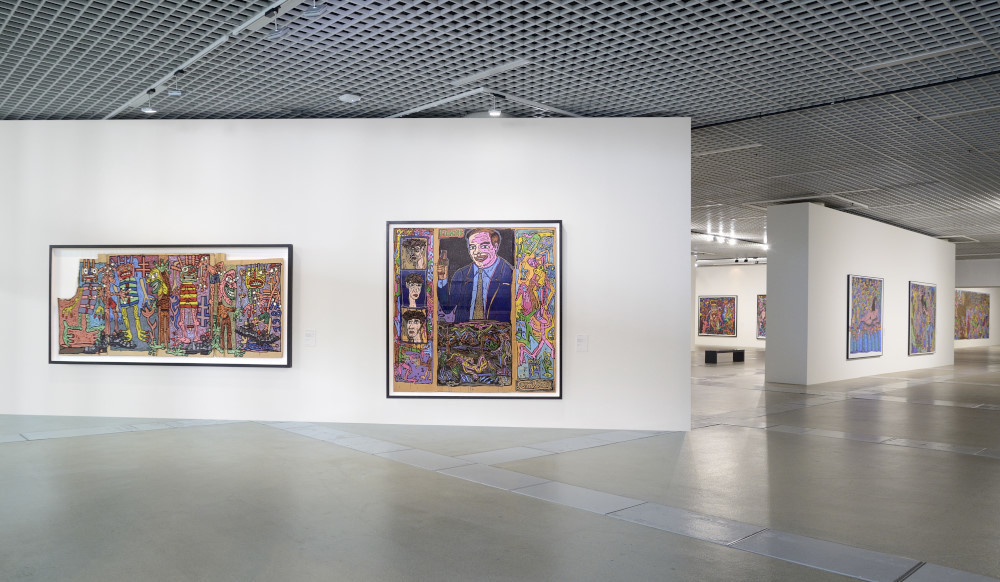 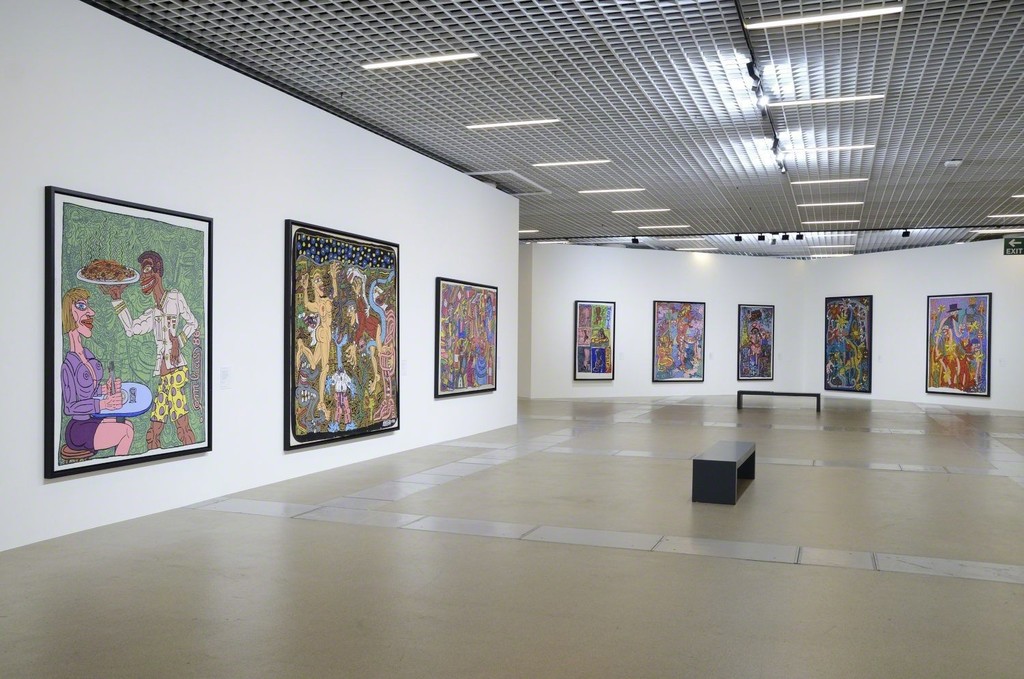 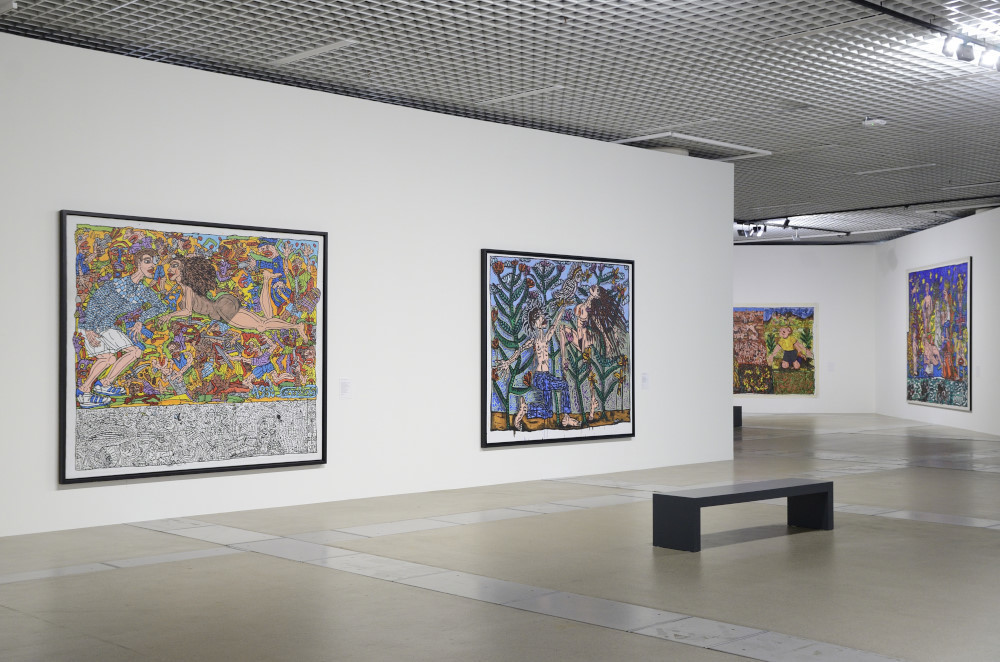 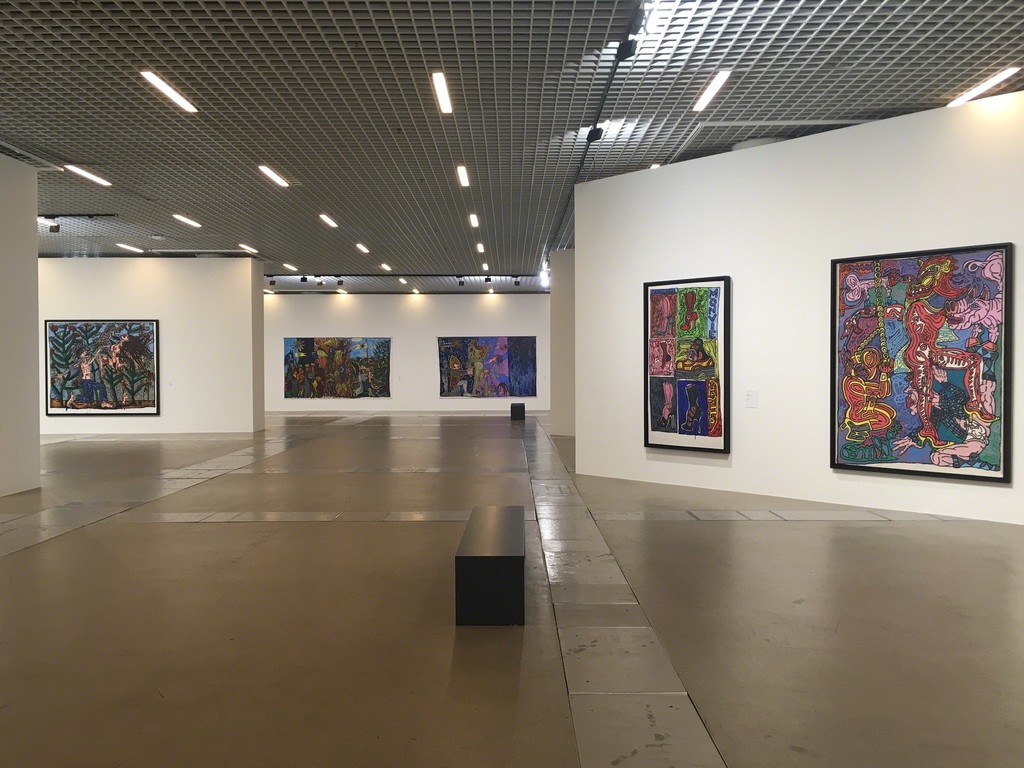 While he achieved prominence on the international stage at the beginning of the 1980s as the leader of the Figuration Libre [Free Figuration] movement, Robert Combas (born in Lyon in 1957) has reinvented himself ceaselessly for decades. After studying in Sète and at the Ecole des Beaux-Arts in Montpellier, where he came to the attention of Bernard Ceysson, then director of the Musée d’Art et d’Industrie of Saint-Etienne, the painter rapidly acquired renown: in 1980 Bernard Ceysson invited him to participate in the museum exhibition ‘Après le classicisme’ [After Classicism] while his first personal exhibitions abroad were held in Düsseldorf and Amsterdam. The gallery owners Bruno Bischofberger and Daniel Templon very quickly pinpointed the young artist and were to become loyal collectors of his work. In 1982, Robert Combas began a fruitful collaboration with the art dealer Yvon Lambert and the following year he joined the stable of Léo Castelli in New York who exhibited his works on two occasions, in 1983 and 1986. He also took part in two major events which compared the work of the French Figuration Libre artists — Rémi Blanchard, François Boisrond, Richard Di Rosa and Louis Jammes — to those of the American graffiti artists — Keith Haring, Jean Michel Basquiat, Crash and Kenny Scharf: ‘1982 Statements New York 82: Leading contemporary artists from France’ at New York’s Holly Solomon gallery, curated by the art critic Otto Hahn, and ‘5/5 Figuration Libre, France / USA’, which was held at the Musée d’Art Moderne de la Ville de Paris in 1984. Since then, his work has been the subject of numerous retrospectives, both in France and abroad: ARCA in Marseille (1984), CAPC in Bordeaux, Stedelijk Museum in Amsterdam (1987), Taipei Fine Arts Museum in Taiwan (1990), Musée d’art moderne de la Ville de Paris (1993), Musée Paul-Valéry in Sète (2000), Seoul Museum of Art, in Seoul (2006), Fondation Mudima in Milan (2009), MAC in Lyon (2012), etc.

‘The rules of Figuration Libre: it’s about doing whatever you want as much, as personally and as freely as possible’, the artist said at the beginning of the 1980s. From the very beginning his style stood out from that of his contemporaries, and made a radical break with the abstract and conceptual aesthetic of the 1970s. The different artistic currents in which attempts were later made to define him: Figuration Libre, Outsider Art, Graffiti Art, in the end merely revealed his uniqueness. Moreover, although he had undergone artistic training, it was through an very personal journey that he forged his own vocabulary, without bias, open to everything, curious about everything, without any consideration of high or low, nor a conditioned visual approach. This eclecticism manifested itself from the end of the 1970s, when he started a series of paintings devoted to the Walt Disney hero Mickey, and other popular children’s cartoon characters. His spontaneous approach to painting was characterised from the start by extreme stylisation of faces and bodies, disrupting the rules of perspective and proportions. At the same time, he created the magazine BATO, which he qualified as an ‘assemblagist work of art’. Produced manually and collectively, it was made up of assemblages, drawings, paintings and texts, thereby laying the groundwork for his formal vocabulary. While he seemed to prioritise immediately identifiable, widely-known motifs, relating to everyday consumption, he didn’t hesitate to tackle emblematic genre scenes from the history of art, which he updated and reappropriated, often flippantly and ironically. The pictorial space became saturated, while a black outline, filled with vivid colours, modelled the subject. From 1987 onwards, following his discovery of Byzantine cathedrals and icons, Robert Combas conferred a more esoteric dimension on his work: the space on his canvases was gradually invaded by streaks. These ‘curtains of paint’ allowed him to pursue his quest for pictorial syncretism, with style and content fusing in their turn. Eventually, while he succeeded in merging the most contradictory elements: comics, rock music, art history, religious and mythological traditions and daily news, Robert Combas also brought together image and words in a totally original dialogue. The captions of his works are particularly voluble and written in deliberately inaccurate French, here again challenging the conventions.

Robert Combas’ passion for work and visual curiosity never faltered. In this respect rock played a fundamental role and it is interesting to note that it was through music that the artist first got his creations spoken about in the press. In 1978, he formed the group Les Démodés with Ketty Brindel and Buddy Di Rosa, and in 2010, Les Sans Pattes, with Lucas Mancione. Through this duo, he intensified his practice of exploration and hybridisation of genres, underpinned by the raw energy of the punk movement, its freedom of tone and appropriation, between popular music and contemporary plastic arts, as demonstrated by his recent retrospective at the MAC in Lyon, rightly entitled ‘Greatest Hits’.
Robert Combas’ literary and poetic inclination has intensified constantly, as attested by his recent collaborations with the philosopher Michel Onfray and writer Michel Houellebecq who invited him to join the ranks of his exhibition ‘Rester Vivant’ [Staying Alive] at the Palais de Tokyo in 2016. Poetry sweeps along sensations, emotions, which transfigure the image, leading the artist to call himself constantly into question. Moreover, there is a very strong link between the rhythms of space, which can be found in the plastic arts, and the rhythms of time, which are found in poetry. This ‘conflict of forces’ endows Combas’ work with a vital energy, equal to none.