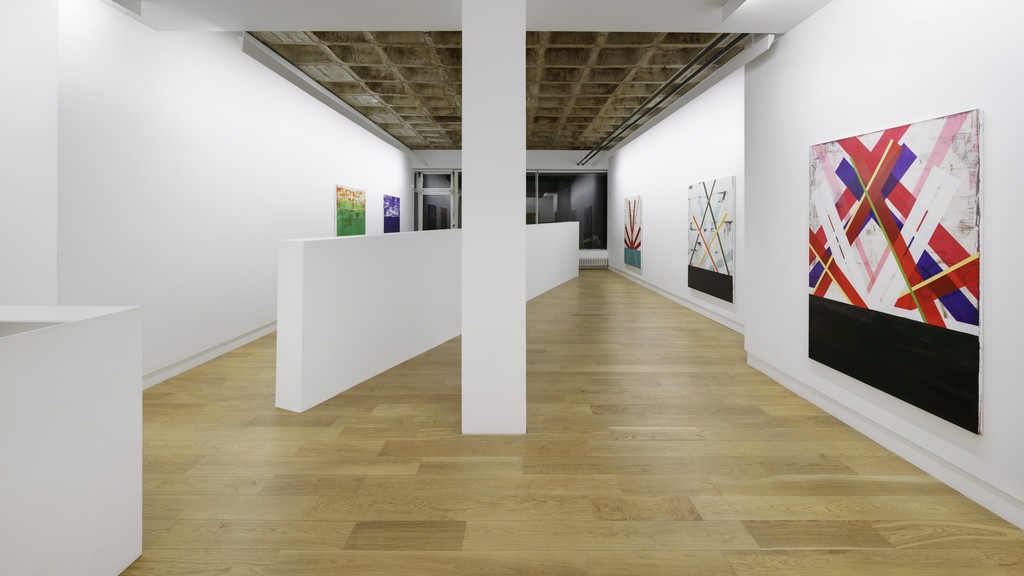 Reminiscent of the constructivist idealism of Rodchenko and Malevich, Syed’s paintings attract through bright transparencies and crisp colours, while their flatness proposes a surface to push against and to uncover. Employing a compositional device of a band of black or solid colour positioned at the bottom of the canvas, the paintings simultaneously obscure and reveal an unseen spectacle. This compositional strategy divides the canvas and proposes oppositional pictorial readings of infinite depth and two-dimensional flatness.

The stage, at once a hierarchical system that presents entertainment for a mass, also acts as a disciplinary structure against the crowd. In a similar way, Syed’s compositions present a pictorial authority, halting the viewer from entering any further into the picture.

Also on view are two monochrome paintings that were produced at the same time as the Stage Paintings. These appear to collapse and expose themselves, bearing none of the attention to a fixed geometry as their counterparts.

Analogous to the block of colour intersecting the Stage Paintings, Syed has staged a physical intervention in the gallery space. A gradually declining wall runs diagonally through the room on top of which visitors are invited to leave their empty beer bottles during the opening and through the run of the exhibition. Playing with the perspectival field of vision interrupted in the paintings, the wall calls to mind a graphic illustration of the economic and often speculative terms “appreciation” and “depreciation”; “loss” and “gain”. Syed conceives this structure of support and separation as a mode of resistance, and proposes a similar intention in his paintings. “The collapsed monochromes were an act of opposition in the studio against all the taping, planning and construction I was involved with while making the Stage Paintings. It became necessary to uncover an absence in response to setting up a proposition for one”, says Syed.