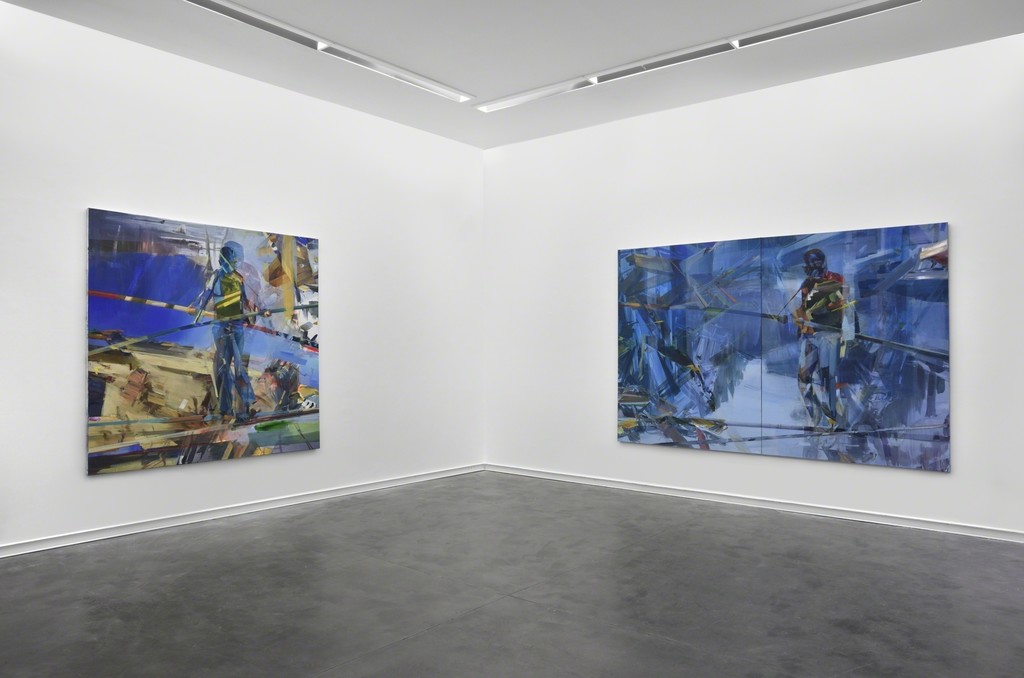 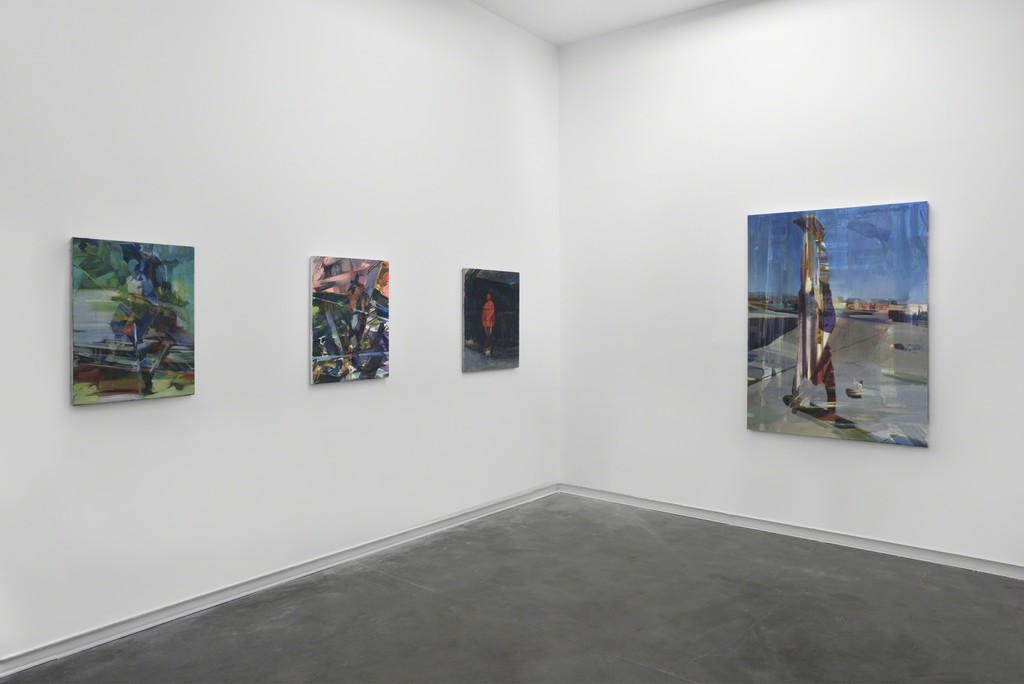 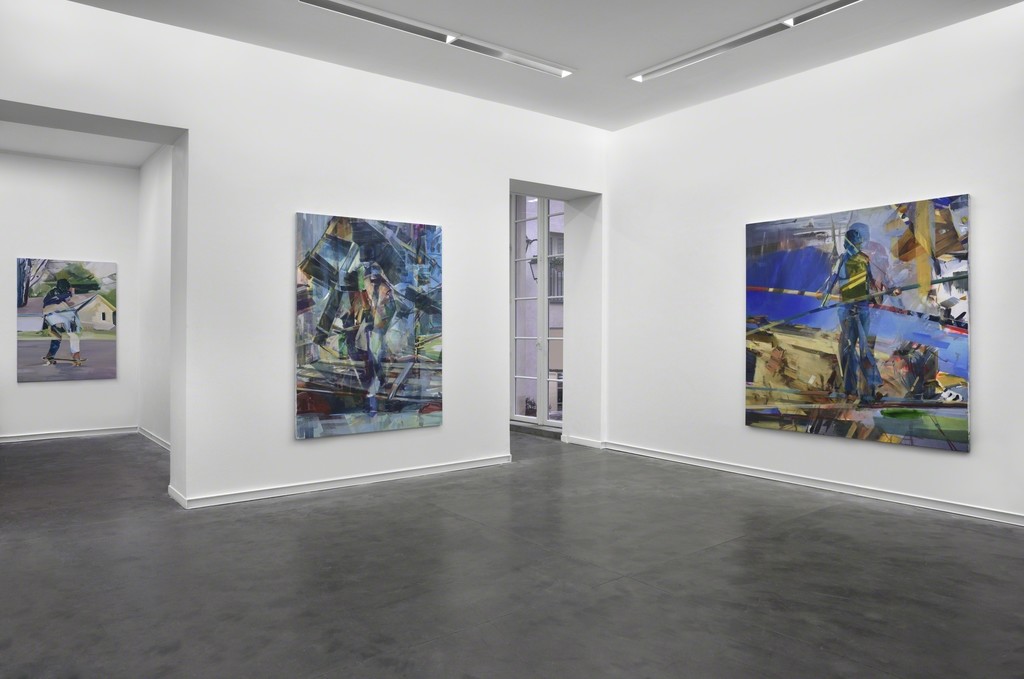 Since his last Parisian exhibition in 2012 (From Chaos at the Galerie Mitterand), Duncan Wylie has travelled extensively, an experience that has made itself felt in his painting. During this period of intense exploration and experimentation in his work, the artist travelled firstly to South Africa, where he stayed for a year as part of a residency programme at the Nirox Foundation in Johannesburg. This return to familiar territory - Duncan Wylie was born in Zimbabwe - allowed his palette to evolve with the introduction of warmer, earthier tones. His practice is now marked by more relaxed gestural strokes and a rawer composition. His motifs have also undergone a change: the human figure is now at the centre of his painting. Since 2012, enigmatic and discreet silhouettes had furtively appeared on certain canvases, heavily dominated by the ruins of architectural constructions. In such works, these figures represent a precarious humanity, which the artist has sought to bring out as emerging from chaos.

On his return from Southern Africa, Duncan Wylie decided to settle in London in order to immerse himself in a new cultural and artistic context, and to develop his approach into the representation of the human form. His practice is known to be informed by the collecting, archiving, and selecting of images from a wide variety of sources. These are then freely reproduced, an accumulation of strata superimposed on the canvas. Wylie’s recent work may be said to explore a specifically pictorial problematic: his visual vocabulary now incorporates a highly identifiable form of historical resonance, breaking away from the iconography of his previous work. Human forms now appear on the surface of his complex constructions. Although it is impossible not to notice them, these forms do not impose themselves on their environment, but instead seem to blend into their surroundings in a chameleon-like fashion. The painted figures literally fuse with the successive and overlapping strata. The use of glaze, a recurring characteristic of Duncan Wylie’s work, allows human forms to be marked out in the negative, like windows opening onto the background of the painting.

The works presented in this new exhibition are striking in their typology of the figures represented, primarily tightrope walkers and skaters, in a state of precarious equilibrium. These figures are referred to by the artist as ‘slashers.’ This term, coined by Marci Alboher of the NYTimes, is a derivative of ‘slash,’ the typographical symbol (/), omnipresent on the Internet. Duncan Wylie’s ‘slashers’ correspond to a recent sociological classification applied to thirty­somethings who juggle multiple jobs out of economic necessity, but also out of a desire to diversify their professional experience. Between precariousness and the construction of a plural identity, slashers find a particular resonance in Wylie’s work: they are repeated, blended together, and decontextualized from painting to painting. At once universal and immediately identifiable, they remain hermetic and elusive. As Duncan Wylie explains: ‘These figures were not decided upon in advance, they are more the result of events taking place in the paintings; they emerge from, and adapt to what is happening in the layers of the painting.’

Duncan Wylie was born in Harare, Zimbabwe in 1975 and obtained French citizenship in 2005. He graduated with honours from the Ecole National Supérieure des Beaux­ Arts de Paris, and lives and works between Paris and London. In 2009, the Musée de Grenoble devoted a solo exhibition to the artist, entitled ‘Duncan Wylie ­ Open House’ (curated by Guy Tosatto). Duncan Wylie has participated in numerous group exhibitions: ‘Poétique du Chantier’ (Musée ­Château d'Annecy, 2010); DYNASTY (MAMVP and Palais de Tokyo, 2010); ‘Beyond the Crisis’ (6th Curitiba Biennale, Brazil, 2011); ‘De Leur Temps 4’ (Centre d'art Le Hangar à Bananes, Collections de L'ADIAF, Nantes, 2013); and ‘Facing Nature’ (Museum Belvédère, Heerenveen, The Netherlands, 2014). His works are also featured in the collections of the Musée de Grenoble, the MUDAM in Luxembourg, and the CNAP in France. His work is currently presented at the exhibition “La Forza delle Rovine” in Rome, at the Museo Nazionale Romano Palazzo Altemps until January 15th 2016.