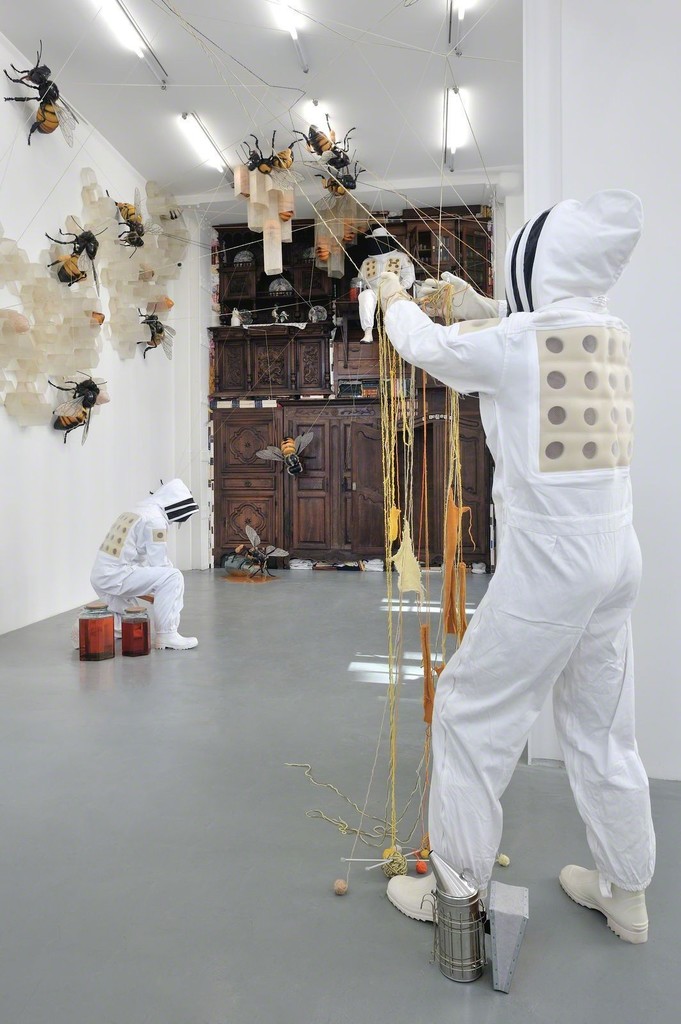 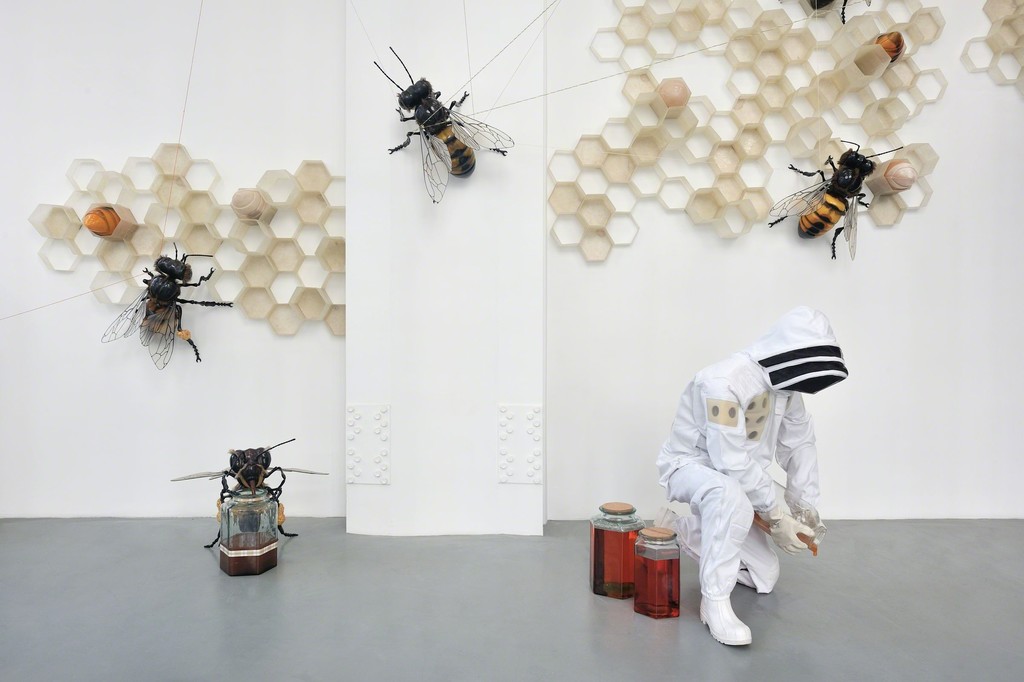 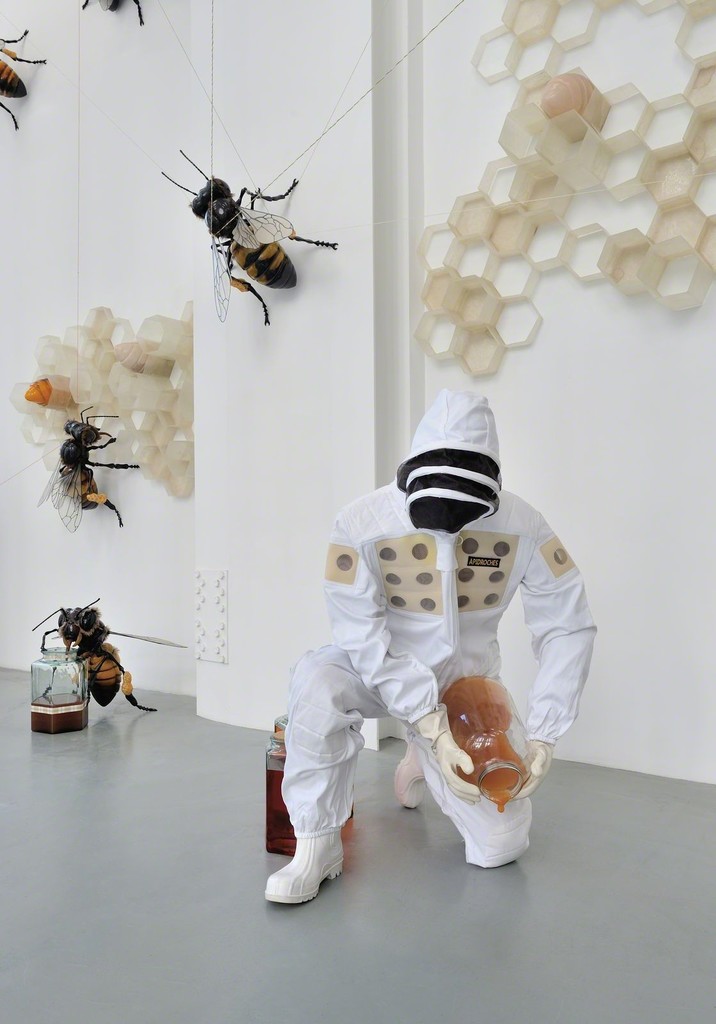 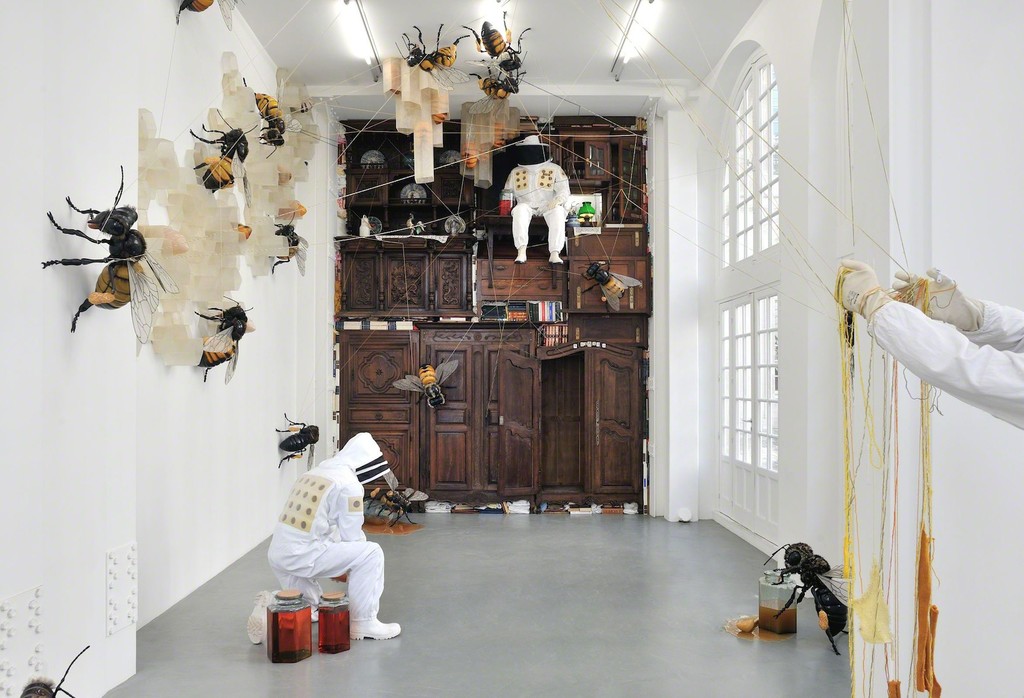 Since in the 1990s, Jean-François Fourtou has been building up a body of work on the theme of infancy. His art always closely reflects his own life. For his project on houses, he created almost exact replicas of places that are familiar to him: for Mes Maisons (2007) he recreated the house of his great grandmother, adjusting only the scale; Tombée du ciel (2010) is a reconstruction of his grandparents' house in Charente, life-size but upside-down, as if sent from the heavens by his late grandfather.

For his exhibition at the Galerie Mitterrand, Fourtou presents Merci Louisette, an installation constructed from a motley collection of family furniture, held in a seemingly precarious balance and riddled with giant bees, pots of honey, honeycomb, stalactites, hives and bee keepers. The furniture, bequeathed to the artist by his Aunt Louisette, is arranged so as to create a maze of passages and secret corners brimming with memories and assorted objects, depicting at once a single human destiny, and the artist's desire to capture the past, in order that it might be given new life.

This monumental work is a labyrinth of memory, an accumulation of experiences lived and lost, a search for feeling, and a testimony to a bygone era. Through this installation, Fourtou allows us to share in the experience of his own personal disarray, when faced with the irrevocable loss of his loved ones. Merci Louisette results from looking back at a moment of « enchantment », similar to that experienced by the character Professor Isak Bourg in Ingmar Bergman's film Wild Strawberries, who is able to rediscover the joys of his childhood through dreams.

How do we re-inject life and substance into objects from the past? How else can this collection of furniture-souvenirs, modest in monetary worth but rich in emotion, pay tribute to Aunt Louisette, other than by becoming a work of art? The transformation of everyday objects into symbols, through the will of the artist, is the most beautiful example of the triumph of life over absence, and is reminiscent of Mallarmé's poem « Le vierge, le vivace et le bel aujourd'hui » [The virginal, living, and lovely day] triumphing over dark forces.

Jean-François Fourtou graduated from the Ecole des Beaux-Arts de Paris in 1992. Since then, he has had numerous solo exhibitions in both private and public institutions including MAMO (Marseille) in 2014, the Galerie Iconoscope (Montpellier) in 2005, and the Verrière in Brussels in 2003. His work was also exhibited as part of group exhibitions at the Museum Fesch of Ajaccio in 2011, the Museum of Modern Art in Sao Paulo in 2009, and the Grande Halle de la Villette (Paris) in 2007 to name but a few. He took part in Lille 3000's « Fantastic » festival in 2012, the Marrakech Biennale in 2010, and Nuits Blanches [White Nights] events in Paris in 2004, and in Rome in 2005.