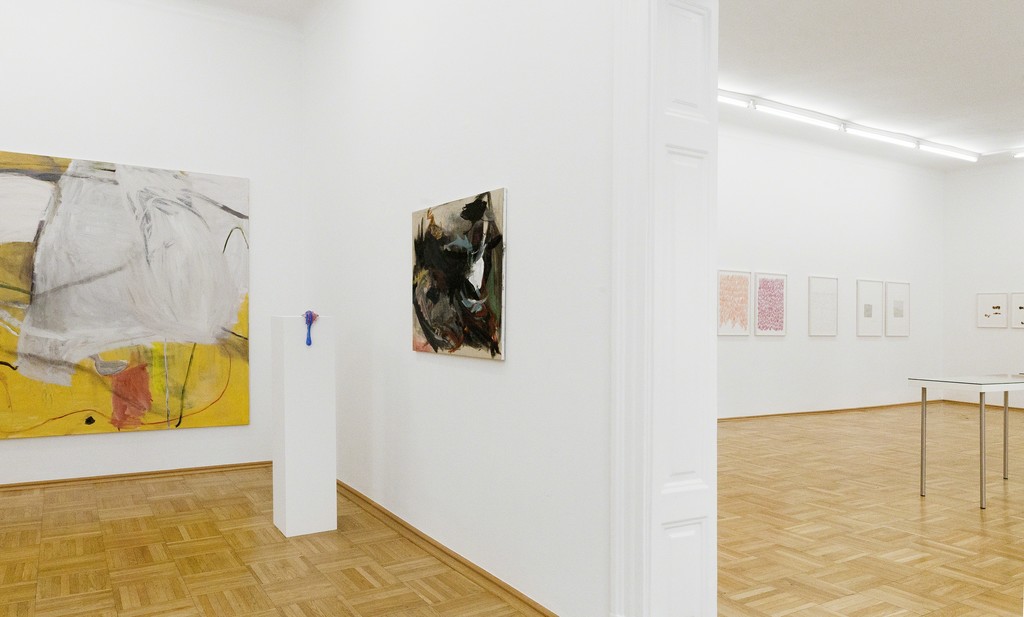 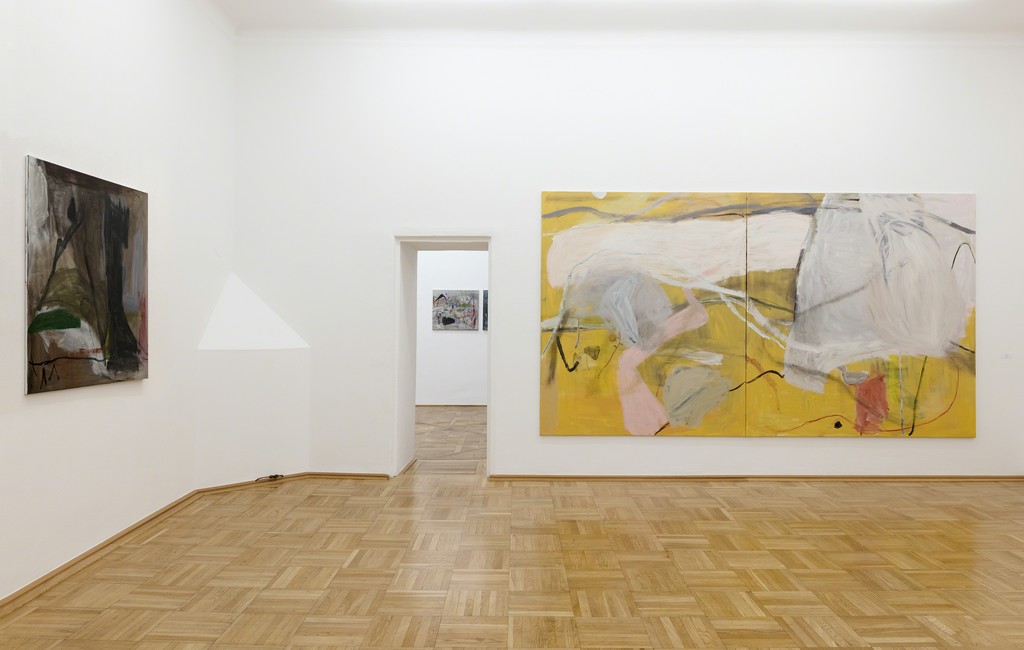 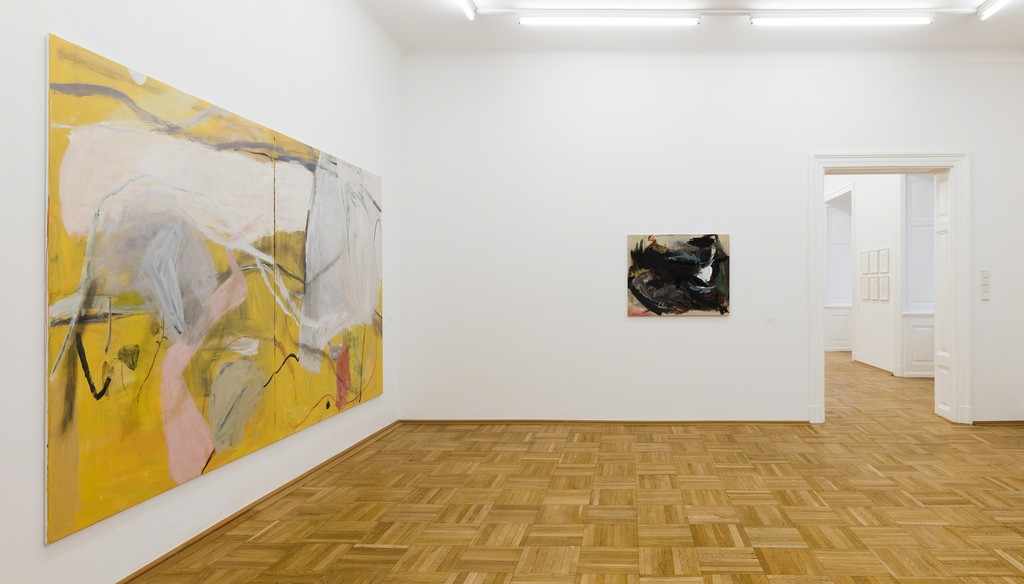 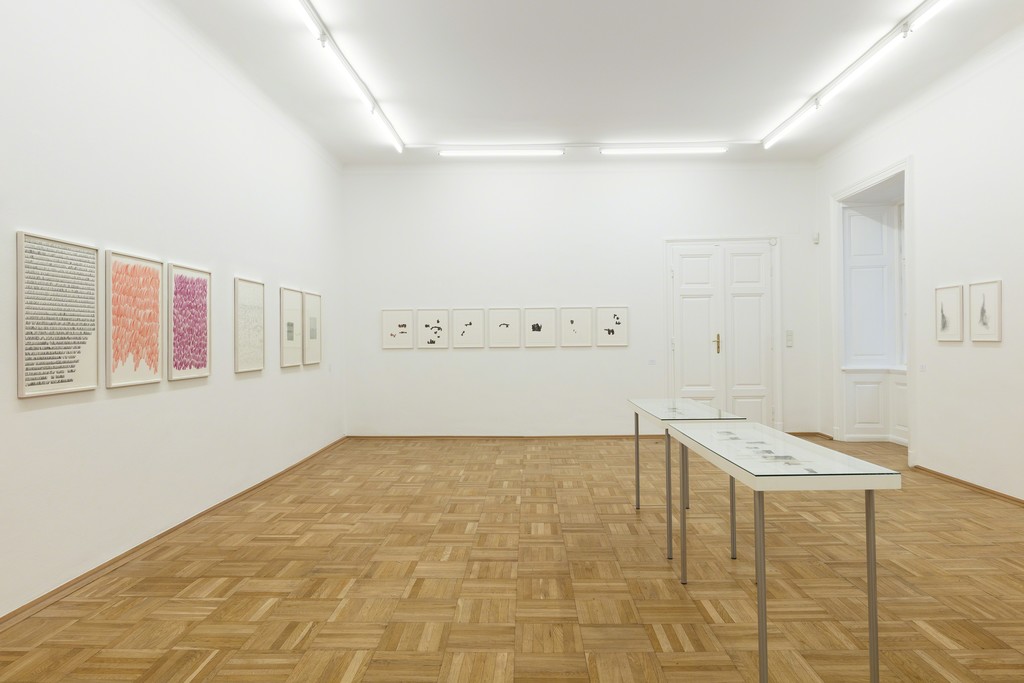 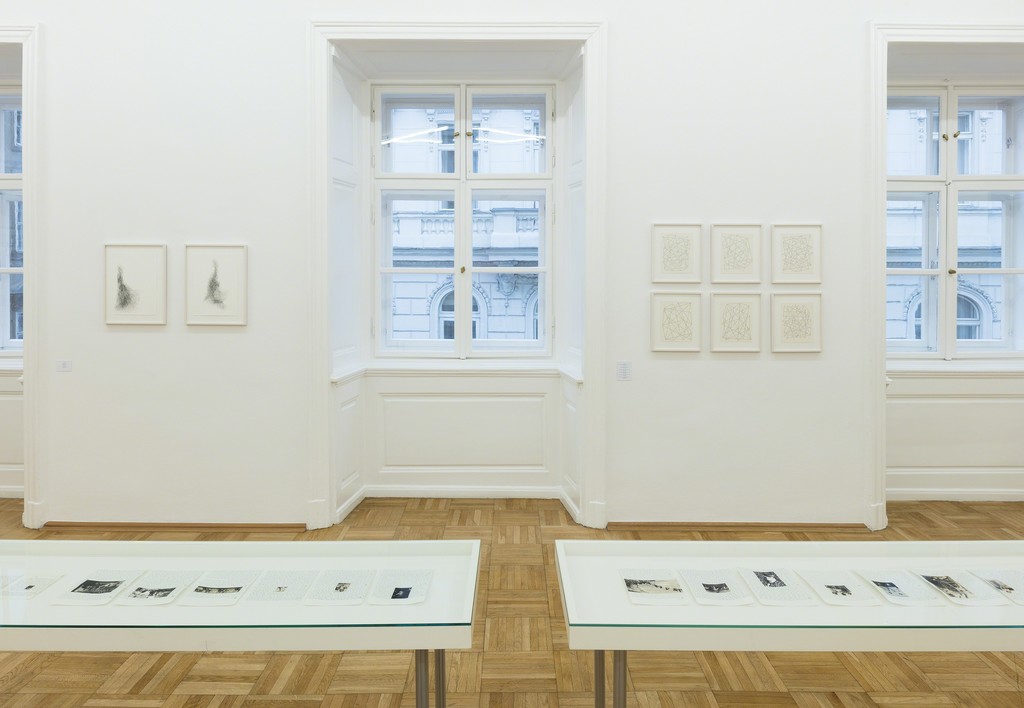 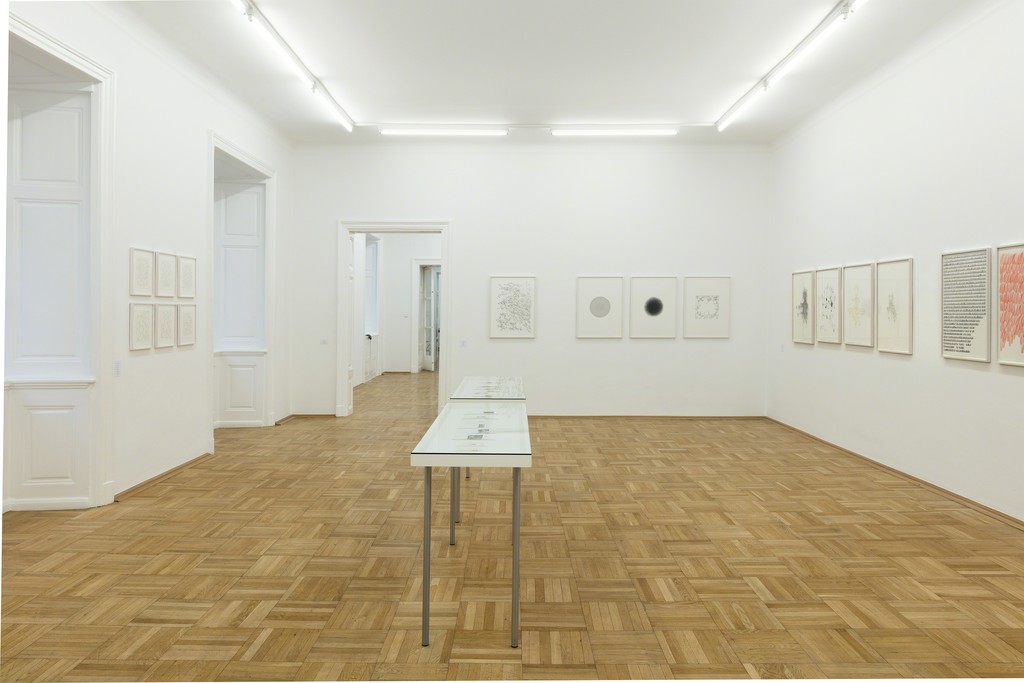 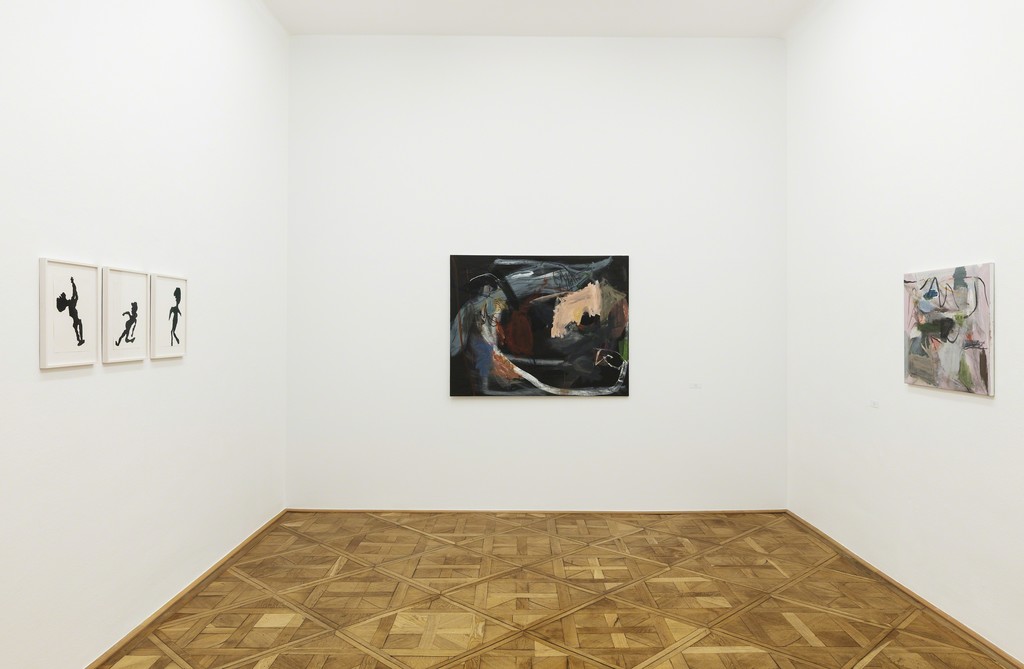 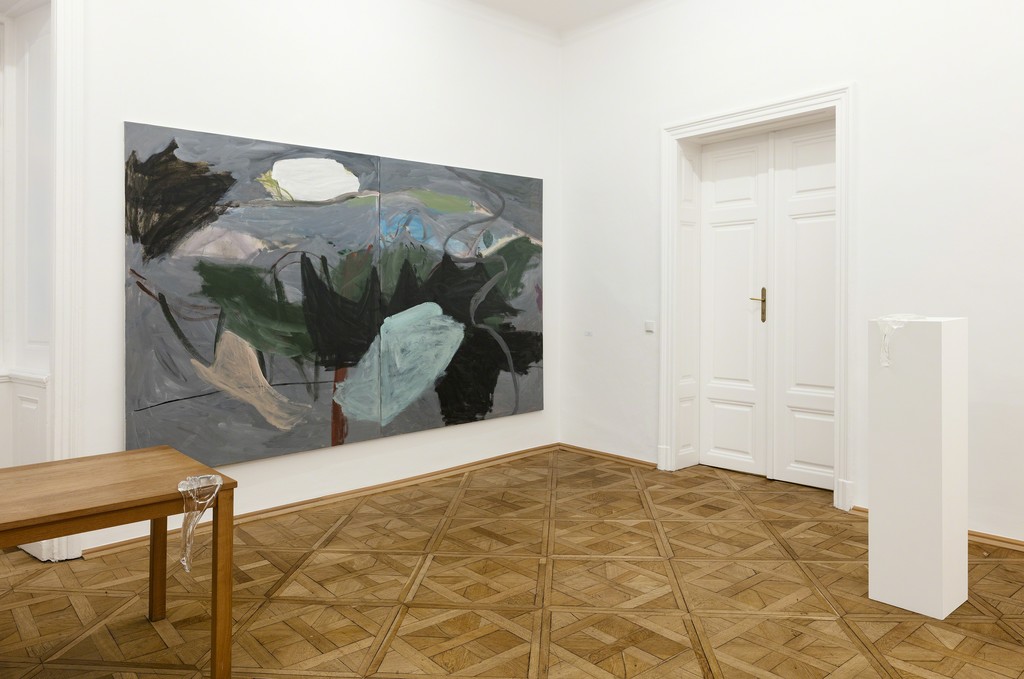 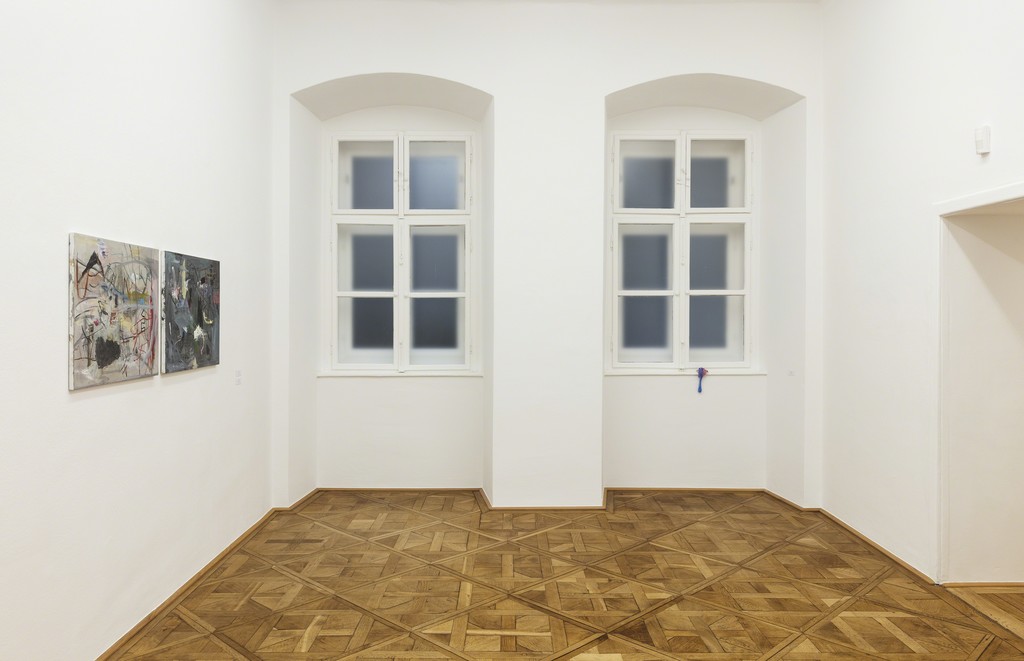 The ink drawings by ALICE ATTIE (born in 1950, in New York City, where she lives and works) involve the minuscule. They often explore the territory between writing and drawing, where the two overlap. Her drawings are meditations in ink that allow tiny marks to accumulate over long sustained periods of time. Engaging repetWe are pleased to present an exhibition of drawings, sculptures, and paintings by the three women artists ALICE ATTIE, KARIN SANDER, and JONGSUK YOON. While Karin Sander has been part of our program for more ition, rhythm and gradual change, she allows these minuscule words, figures, numbers and marks to accrue and grow on the paper. When presenting a landscape of numbers or letters or of a language that is not real, she is inspired to push and suspend meaning, allowing it to slip into visual abstraction. In the series entitled Class Notes, Attie takes notes while attending philosophy and physics lectures at Columbia University. She re-inscribes and re-imagines the lectures in the form of drawings. These too are visual analogues to the intellectual adventures that Attie finds herself drawn to.
Her most recent series of works Take Care of Yourself is based on Michel Foucault’s last lectures at the Collège de France in Paris from 1982 to 1984, shortly before his death. These lectures focused on the idea of the “The Care of the Self,” also the title of his book (Le souci de soi). This idea, which can be traced back to Socrates, consists of caring for one’s body and mind, caring for others, and caring for personal freedom and freedom of speech. Attie’s drawings, which continually repeat the sentence “take care of yourself,” are contemplative sites of linguistic ambiguity and transgression. Attie’s series Wandering: Drawings and Collages continues her Requiem series, part of which was acquired by The Museum of Modern Art, New York. For this series, Attie works on unused pages from her father’s 1930-40’s notebooks, which she has filled with repetitive sentences or fictitious letters. The images are culled from many places including newspaper images, her own photos, found vernacular photos from her collection (originating in flea-markets).

KARIN SANDER (born in 1957 in Bensberg, lives and works in Berlin and Zurich) is known for her pointedly conceptual works, like drawings with applied office materials, polished chicken’s eggs (Hühnereier), polished wall pieces, Patina Paintings, Mailed Paintings, figurative sculptures of Living Persons on a Scale of 1:5, 1:7,7 or 1:10, Kitchen Pieces and others. She alters the state of things that are already there, be they objects or rooms or surfaces. In small interventions into the situation, she exposes its material conditions.
For Karin Sander’s glass project, she was invited by Berlin Glas e.V. to use their studio to work on a collaborative project using this traditional material. She began by approaching glass analytically in an attempt to understand its consistency and qualities. She then used this as a basis to develop objects that would reveal these experiences. Glass’s viscosity and its reaction to heat and cold define its processing and design more than any other characteristic. Karin Sander thus took the fundamental steps of glass casting and dripping as her starting point. “Liquid glass spreads out on a surface, slowly welling over its edges, until it solidifies into drop-shaped offshoots. Multiple layers are cast on top of each other, and, according to their specific consistency and viscosity, each of them will obtain its unique shape. These cooled-down glass sculptures, slowly solidified flowages, are reminiscent both of lava and ice.” (Karin Sander)

At first glance, the paintings by JONGSUK YOON (born 1965 in Onyang, South Korea, lives and works in Düsseldorf) seem to belong to the tradition of Abstract Expressionism. While Jongsuk Yoon is indeed familiar with the paradigms of European and American modernism, thanks to her studies at the academies of art in Münster and Düsseldorf, she is also influenced by the traditions of her home country and by an Asian sense of form, especially regarding Asian landscape painting and its specific two-dimensionality. Yoon’s paintings evolve in a process guided by meditation and concentration. Her subdued colors and frequent changes in perspective, with their suggested landscape elements and gestures reminiscent of calligraphy, create a balance between Western and East Asian painting traditions without one outweighing the other. Despite her animated painting style, we sense a great slowness, something quiet and trans-personal that avoids all drama and remains open to the unexpected. Yoon describes her painting process as a kind of “communication between the painting and me… My ideas take shape on the canvas while I am painting. I do not yet have the finished image in my head. In a way, it’s the painting telling me what to do.” This “web of relationships” creates paintings that are “Mind Landscapes” (the title of her solo exhibition at the Museum Kurhaus Kleve) oscillating between disparate worlds full of poetry. They become pictorial metaphors fluctuating between dream and reality.

ALICE ATTIE was born in 1950, in New York City, where she continues to live and work. She holds a PhD in Comparative Literature and an MFA in Poetry and has taught literature throughout the New York area before turning to photography and drawing.
Her photographs and works on paper are in the collections of the Whitney Museum of American Art, Museum of Modern Art, Studio Museum in Harlem, Jewish Museum, all in New York; the Getty Museum, Los Angeles, and the Museum of Fine Arts, Houston. Her work is also in many major collections including the Margulies Collection; the JoAnn Hickey Collection, and the Werner Kramasky Collection.
Attie’s first book of poems, These Figures Lining the Hills, was published in 2015 by Seagull Books/University of Chicago.
A second book of poetry, entitled Under the Aleppo Sun, will appear in the spring of 2018, also published by Seagull Books/University of Chicago. Her book of photographs documenting the changing face of Harlem, Harlem on The Verge, was published in 2001 by Quantluck Lane/W.W.Norton Press.

KARIN SANDER was born in 1957 in Bensberg, Germany. She lives and works in Berlin and Zurich. She studied at the Freie Kunstschule and the Staatliche Akademie der Bildenden Künste in Stuttgart from 1979 to 1987. Karin Sander has been a guest professor at several schools, including the Akademie der bildenden Künste in Karlsruhe, the Staatliche Akademie der Bildenden Künste in Stuttgart, and CalArts (California Institute of the Arts) in Los Angeles. In 1999, she became a professor at the Kunsthochschule in Berlin-Weissensee, and she has been the Chair of Architecture and Art at the ETH Zurich since 2007. In October 2017, Karin Sander’s Transzendenzaufzug (Transcendence Elevator) was realized as part of BIG ART Kunst & Bau (an art in architecture project) at the Kunstuniversität (University of the Arts) Linz. In 2018, she will have a major solo exhibition at the Kunstmuseum Winterthur.
Selected solo exhibitions: Villa Zanders, Bergisch-Gladbach (2017), Atelier Amden (2014–2016); Lehmbruck Museum, Duisburg (2013); Staatliche Kunsthalle Karlsruhe (2012); n.b.k., Neuer Berliner Kunstverein, Berlin (2011); K20 Kunstsammlung NRW, Düsseldorf (2010); Kunstmuseum St. Gallen (2010); Centro Galego de Arte Contemporánea, Santiago de Compostela (2003); Staatsgalerie Stuttgart (2002), and Städtisches Museum Abteiberg, Mönchengladbach. (1992).
Her works can be found in renowned museums, including the Museum of Modern Art, New York City; Metropolitain Museum, New York City; Hirshhorn Museum, Washington D.C; Museum of Modern Art, San Francisco; National Museum, Osaka; Wilhelm Lehmbruck Museum, Duisburg; Sprengel Museum Hannover; Staatsgalerie Stuttgart; Museum Abteiberg, Mönchen-gladbach; and Kunstmuseum St. Gallen.