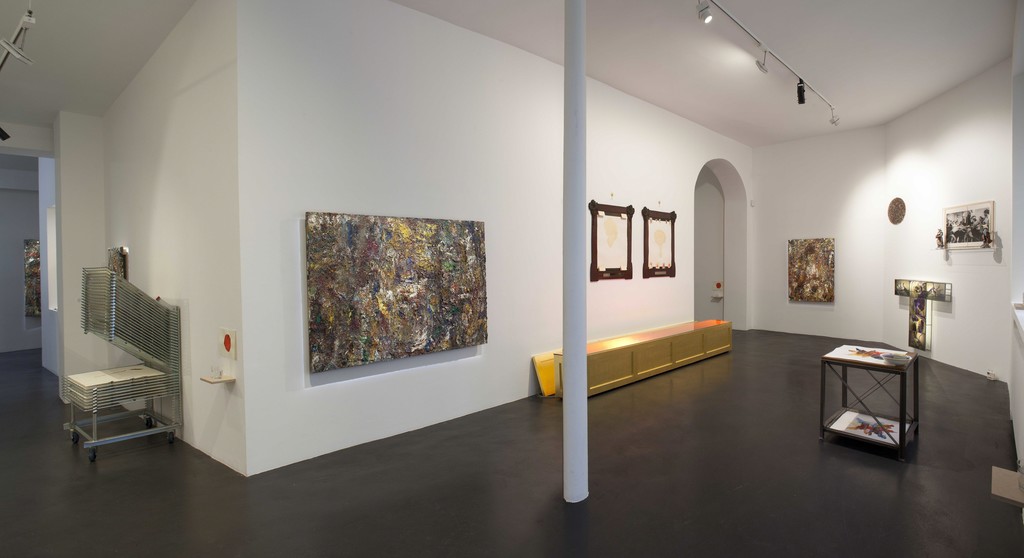 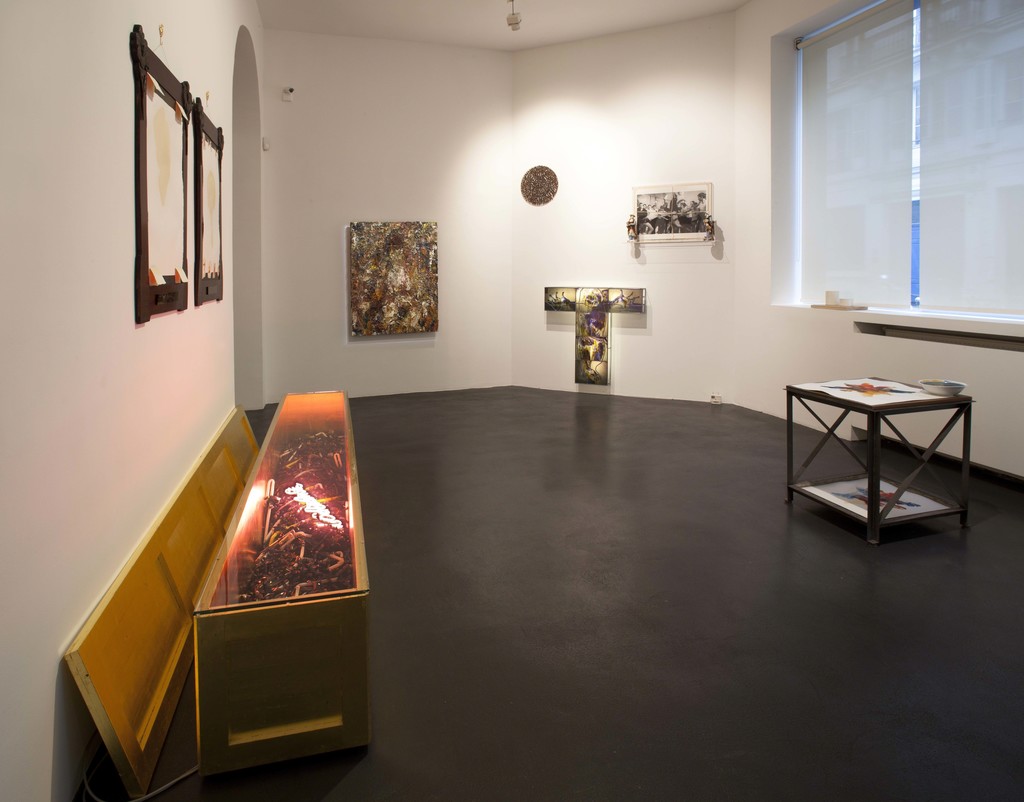 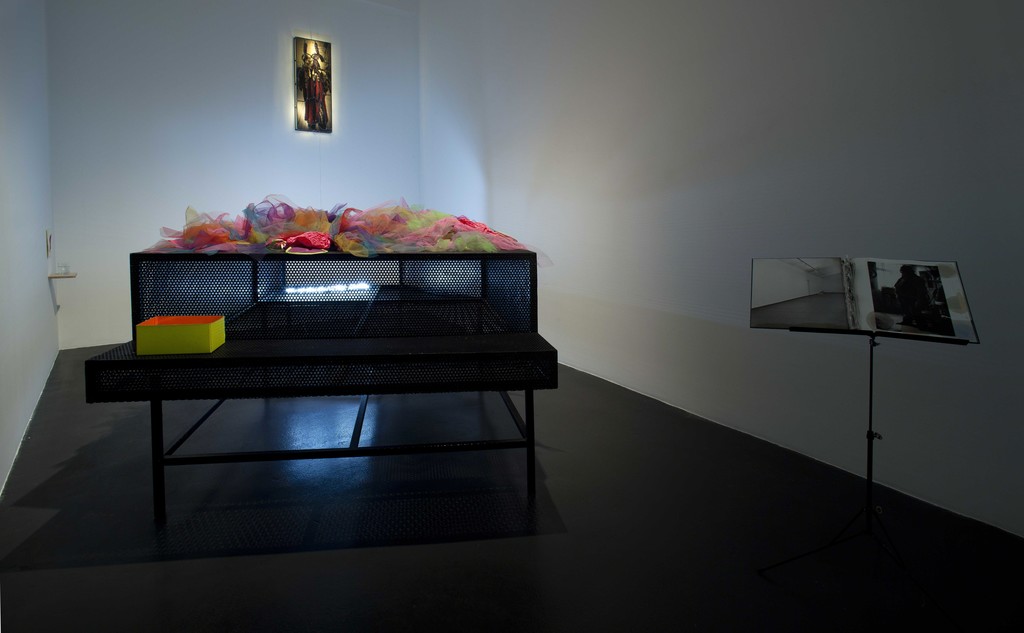 Galerie Nathalie Obadia is very pleased to present Intérieurs, Sarkis’s third solo show in Paris following Il Grido held in our Brussels gallery in 2016. This time, Sarkis invites Eugène Leroy (1910- 2000) in an exhibition he entirely curated to confront his own creations with the master’s work he considers absolutely essential. Even though Eugene Leroy has enjoyed a growing recognition on the international contemporary scene over the last 20 years, Sarkis regrets that this genius painter has not yet been claimed as one of the most impacting artistic figures of the 20th century.

In 2012, on the occasion of the retrospective exhibition Hôtel Sarkis held at the MAMCO of Geneva, the artist already paid a tribute to nearly 70 artists (architects, writers, moviemakers, painters and composers) among which were John Cage, Andreï Tarkovski, Joseph Beuys, Edvard Munch, Sergueï Paradjanov, Arnold Schönberg and Matthias Grünewald. These “collaborations” ignored the distance between each work anchored in a definite time and space in order to open present time conversations seen as “claimed inspirations and glorified friendships”. As complex as a painting by Eugene Leroy, this exhibition gathers a selection of about forty pieces and was conceived as a real “interior” – with a bench, some shelves and glasses of water displayed in every gallery room.

The exhibition starts by tackling the notion of accumulation, which takes up different forms in the work of the two artists. In Eugene Leroy’s, it emerges from the stratums of matter added-up on the canvas, alluding to the body of the painter who sculpts figures out of oil paint density. This very same matter, raw and bare, stripped of intrusive foreign bodies, is to be fully seen as a meaningful agglomerate. Real treasures, big Ikones that require every bit of the elemental matter of which they are made, these paintings punctuate the space like the milestones and sensorial anchors of Sarkis scenography. Combining the most diverse heritages, from Rembrandt to Malevitch, Giorgione through Jean Fautrier and Vincent Van Gogh, Eugene Leroy explores the many potentialities of the matter while developing a science of the impasto that gives his pieces a unique sculptural dimension.

No rambling either in the accumulation of Sarkis’s works from various techniques. Film N°171 «pour Eugène Leroy» was produced without editing. In his oil paintings on paper, oil stains spread under our eyes and soak in, progressively altering the surface and color of the work, sculpting it without any notion of a definite timeframe. No artifice or systematism either: everything is benignly and calmly laid down in the diversity of media the artist used for Intérieurs. Fingerprinted stained glass, gilded wood, magnetic tapes, neon lights, Kintsugis ceramics, prints on paper, an image from Volker Schlöndorff’s movie The Confusions of Young Törless, a video painting, Anton Webern’s music, copper, dried watercolor, a roll of wrapping paper, wood palettes, lipstick, black tar and pink tulle, a 150 million years-old fossilized stone, a witness of the artist’s heart rate, a metallic drawing rack, a writing desk, two Art Nouveau frames with mirrors, a tunic by Japanese stylist Tsumori Chisato, a chain mail, scented oils, china, an African mask, rice, plans of Armenian monasteries and churches from the 8th to the 12th century, watercolor and small Ikones.

Like alchemists in their cave-like studios – a place of solitude, peace and concentration (Sarkis even reproduced that of Eugene Leroy in the exhibition), the two artists pay a crucial attention to light as the cornerstone of their representations. Eugene Leroy’s painting seems to blur outlines to better drive the attention of he who tries to look and see. As for Sarkis, he builds bridges between various temporalities, cultures and sensibilities: protean installations filled with references that draw connections between the works of the past and today’s world. In its own way, both work express a profound humanism, which seems absolutely indispensable in our troubled era.