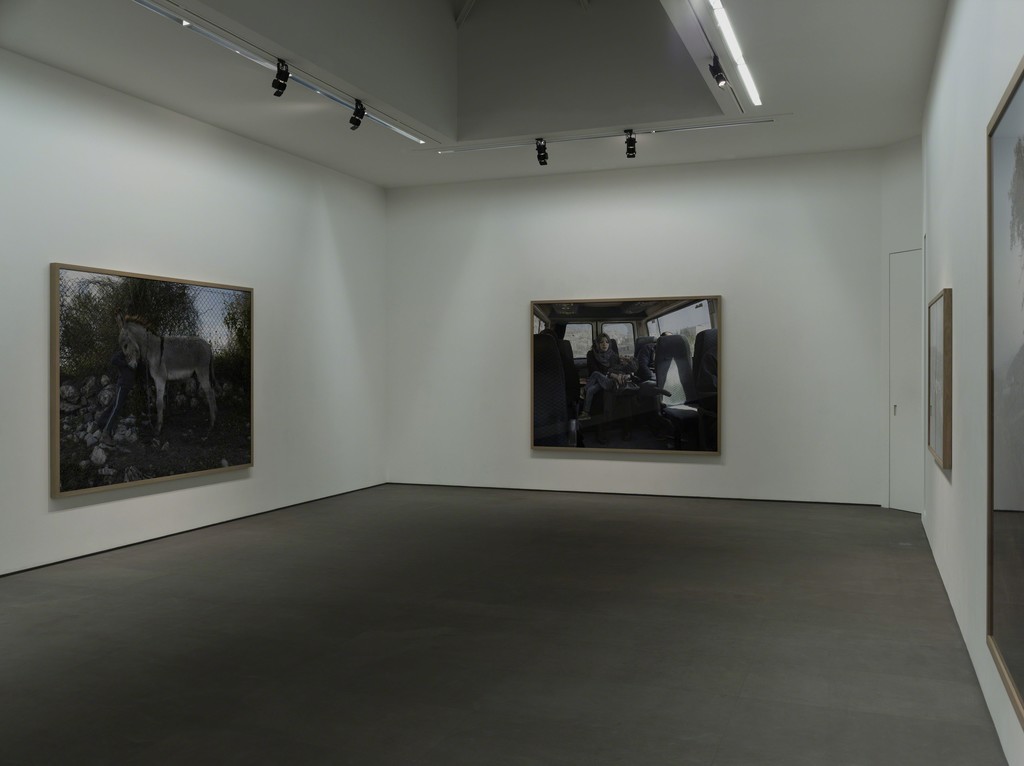 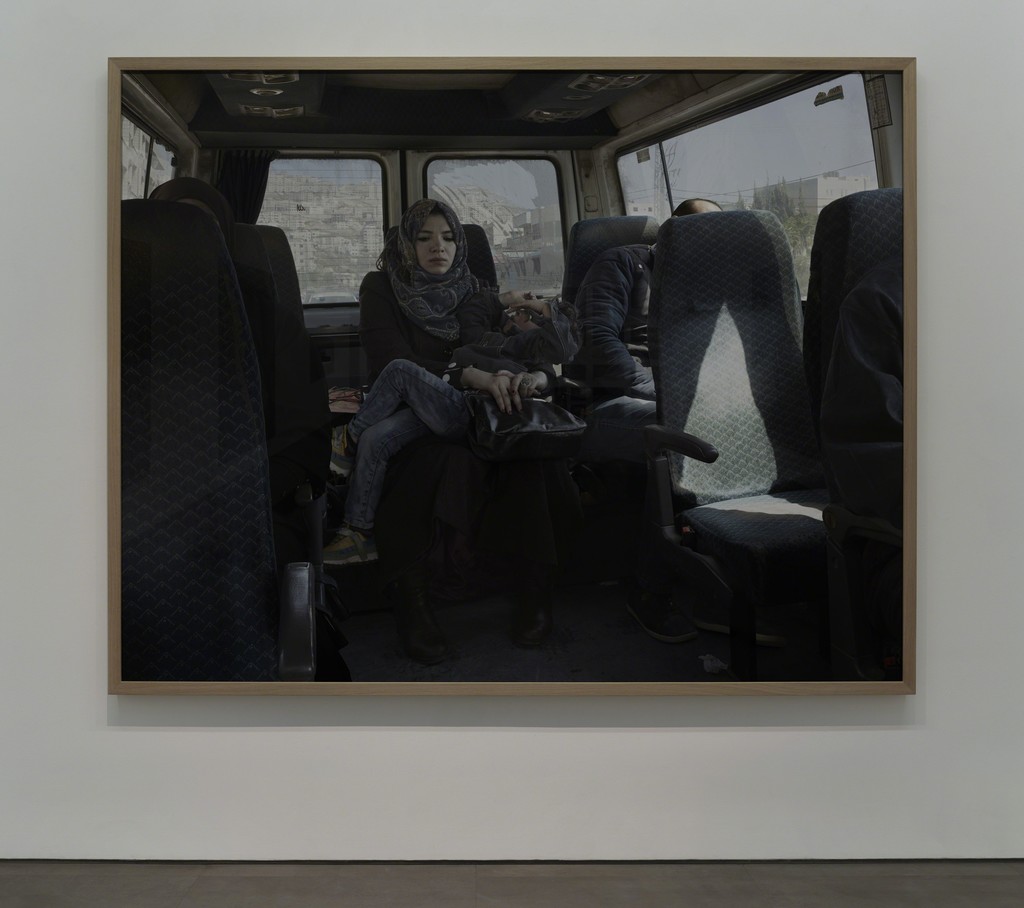 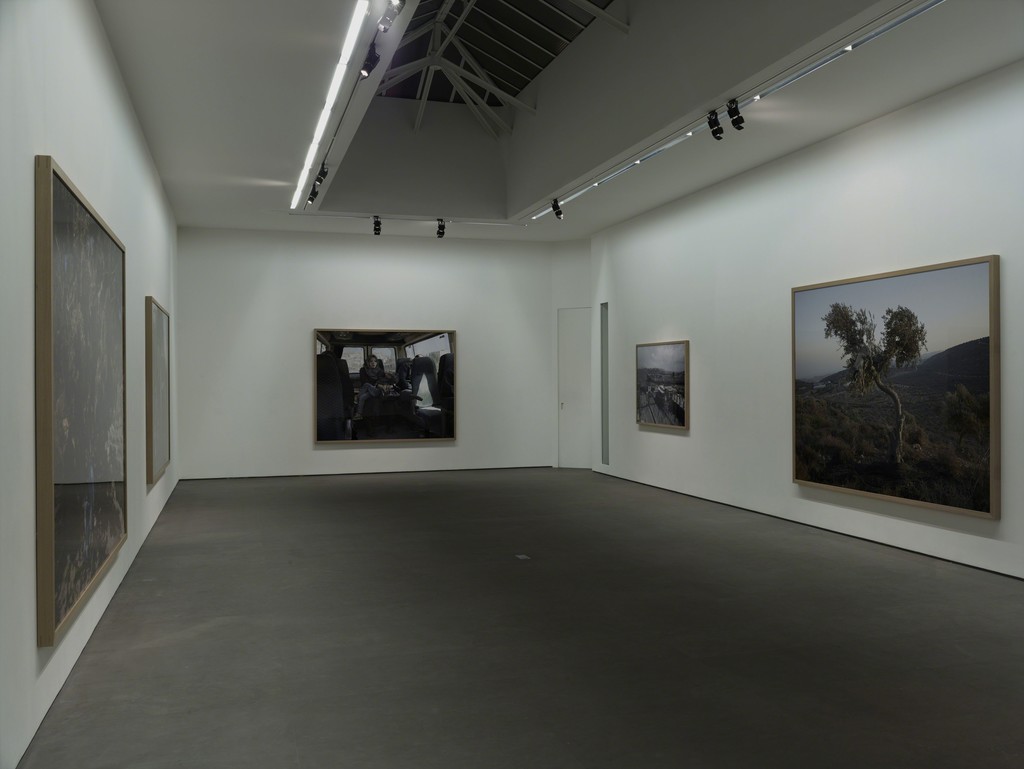 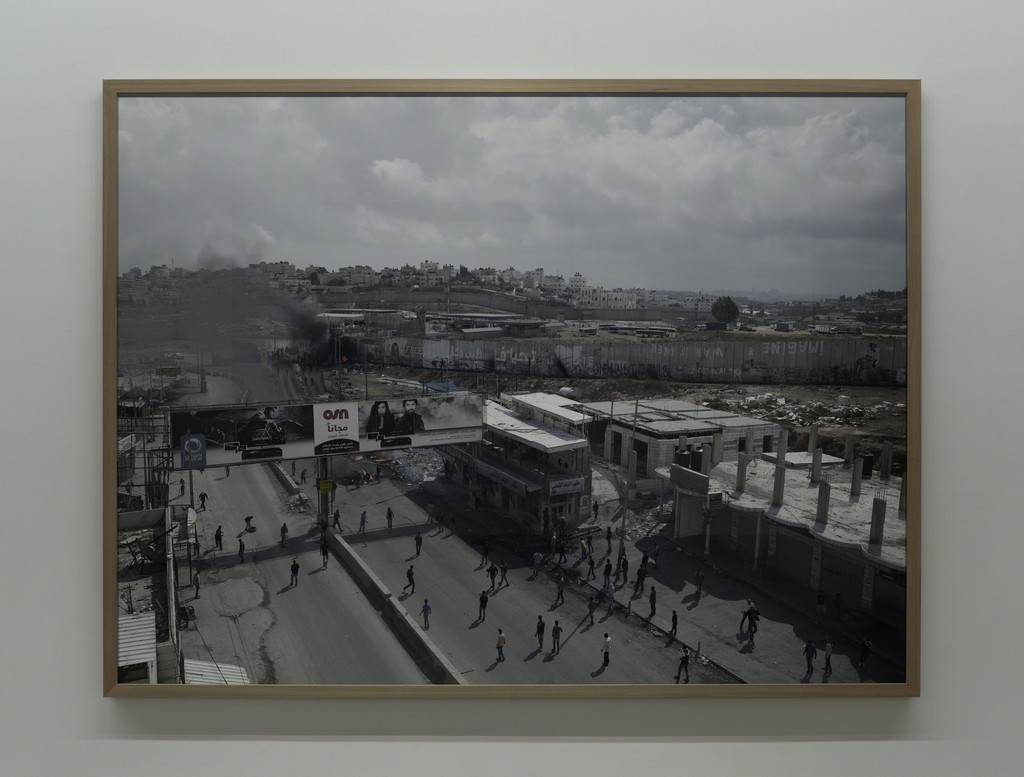 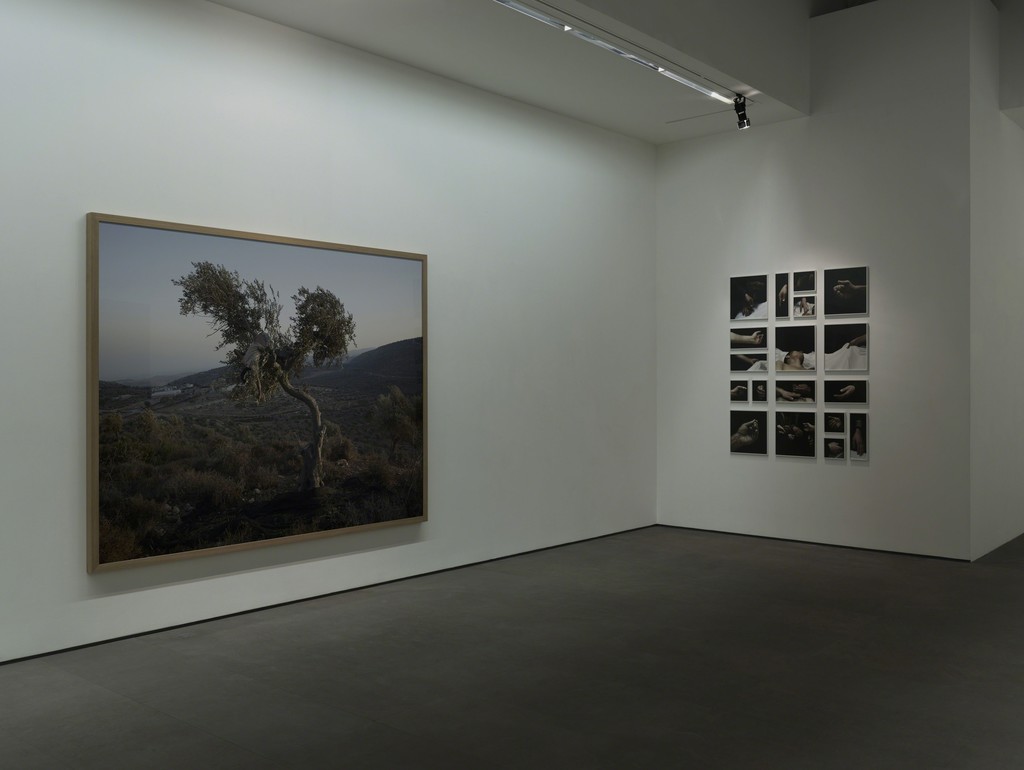 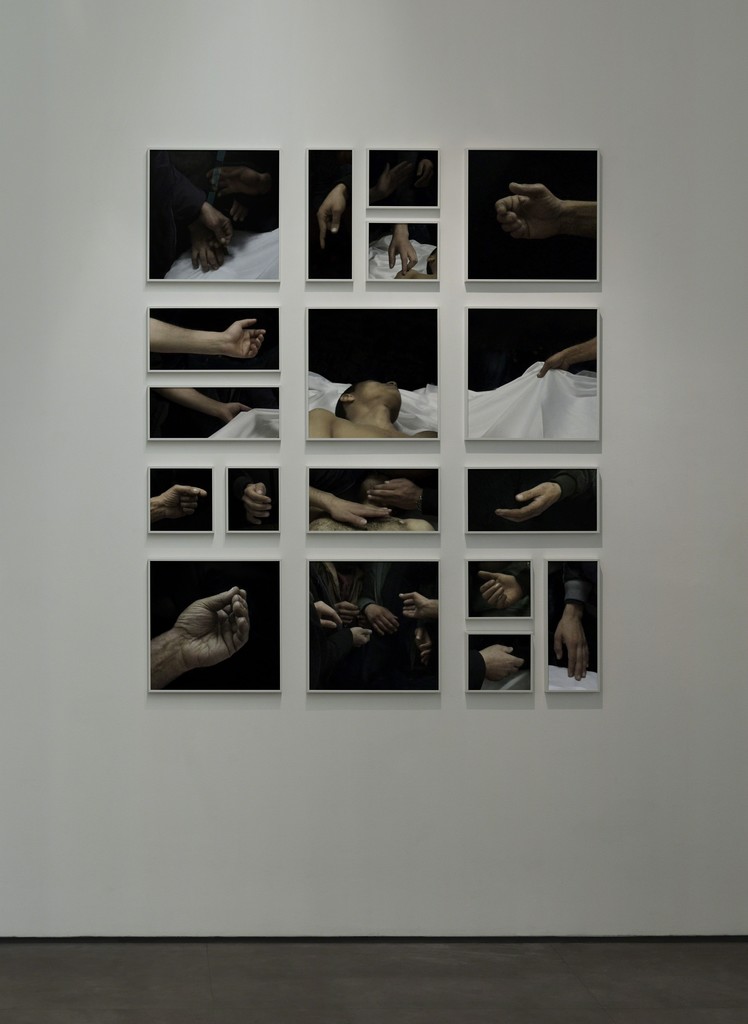 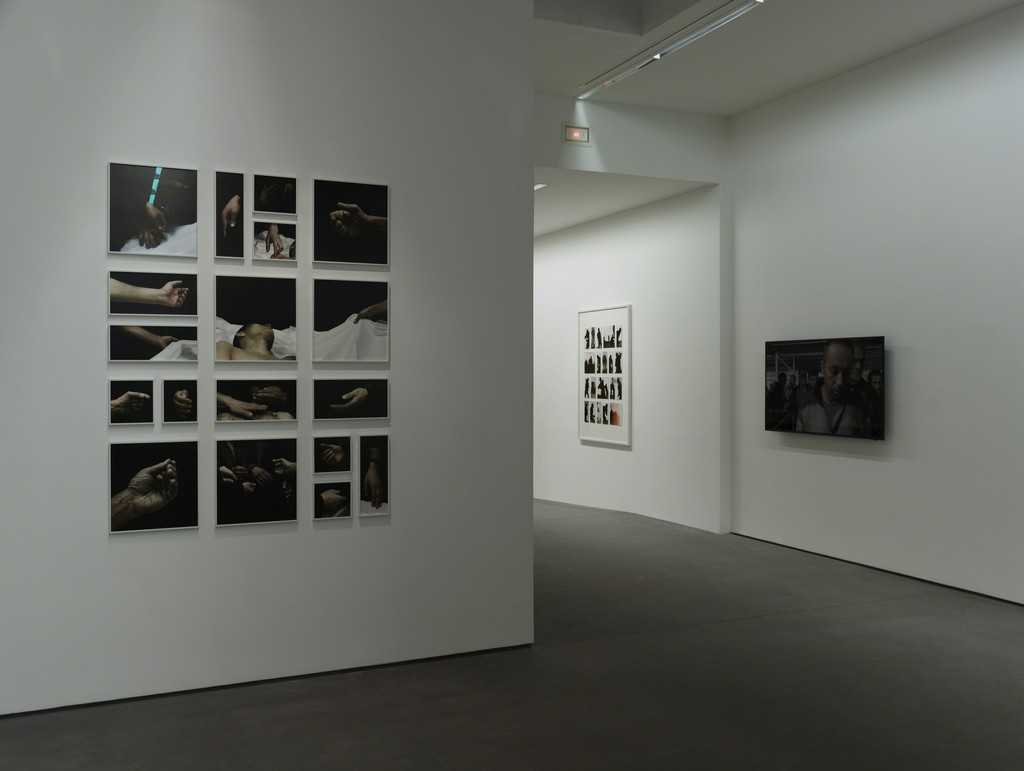 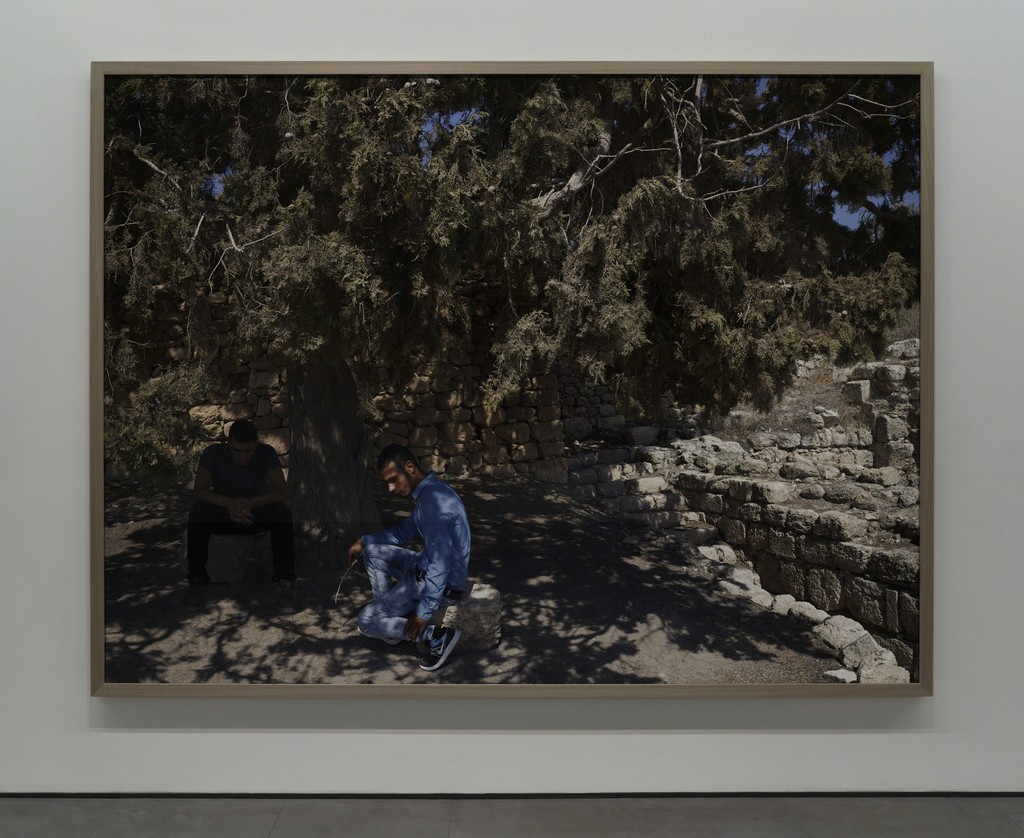 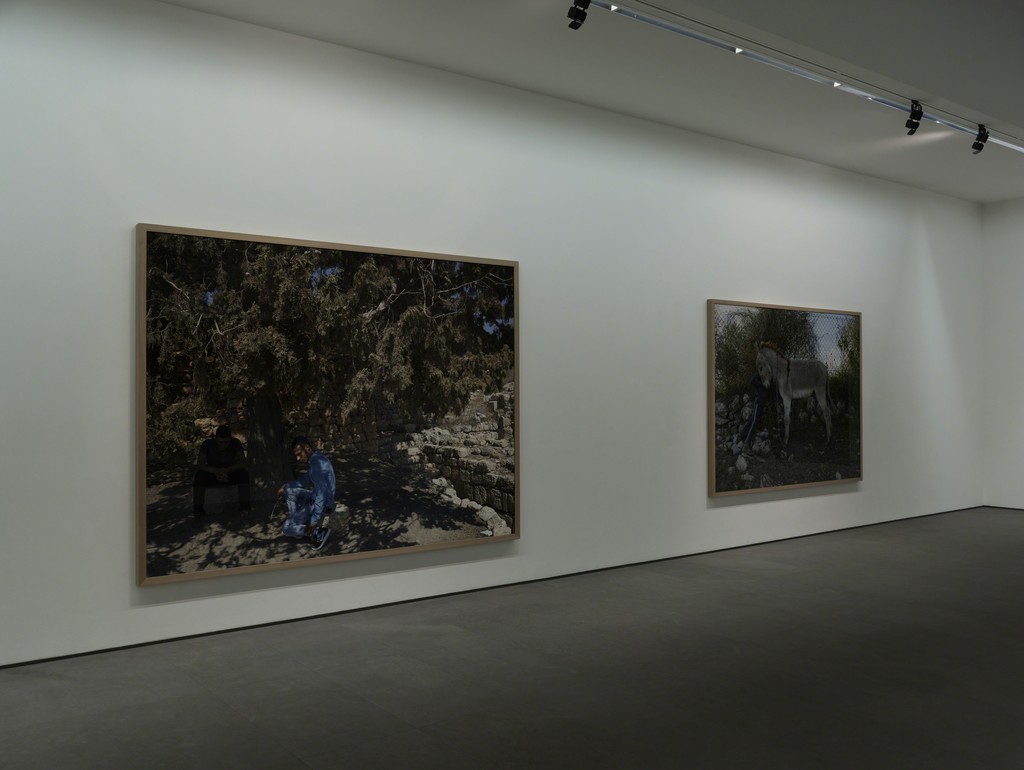 Galerie Nathalie Obadia is very pleased to announce Luc Delahaye’s third solo show entitled Sūmud et autres histoires (Sūmud and other tales). On this occasion, the artist presents seven photographs and one video made in Palestine between October 2015 and March 2017.

“Two young men seat in silence under a tree. In a shared taxi, a woman holds her child on her knees. Five thousands workers go through a checkpoint and start their day. A set of hands during a shahid funeral ritual. A child tries to make his donkey step back. Shadows and silhouettes reenact the primitive fight. Two kids are perched on an olive tree. Minuscule figurines evolve in a landscape stratified by history.

These are scenes from Palestine. They were shot with a cellphone or a view camera made for the occasion. They were taken on the spot or patiently reconstructed with models.

In these large format photographs the outside reality of Palestinian life only appears indirectly. It is the framework that gives the images their severity but it doesn’t constitute their subject matter. What they capture is, rather, a feeling.
How is it to be young in Palestine today? How to find one’s place in a country that only exists through memory and in the common consciousness of a duty? The responsibility to carry on with the resistance is a shared heritage and goes against the desire to make a life for oneself. It is not easy to live according to the sūmud.

Sūmud: steadfast perseverance. It means: being there, to hold up in those dire circumstances and daily humiliations, to assert one’s identity and presence. The sūmud is, at the core of the Palestinian national consciousness, a resistance strategy to the occupation as well as a concrete philosophy. It is an attitude. It relates to suffering, but not as an end: freedom and justice are its horizon. And it is a discipline: the sāmid fuels the fire of his inner rage without showing any sign of it. He controls himself.

So, two young men are seating under a tree, away from the group. They take a break from the role one has to play with others. It is the time for friendship, the time for words softly pronounced in trust. However, they seem absent to one another, as if separately shut up in silence and agitated by the return of bitter thoughts of loss, absence and impossibility, a Palestinian version of the blues.”

The Eyal Checkpoint video will also be presented in Paris during the exhbition En suspens at Le Bal from February 9th to May 13th, 2018.