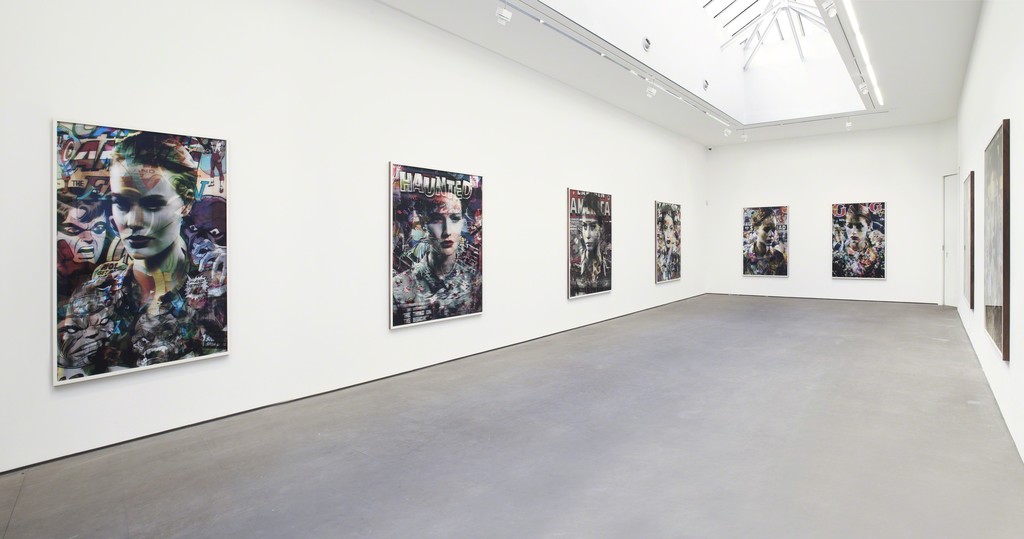 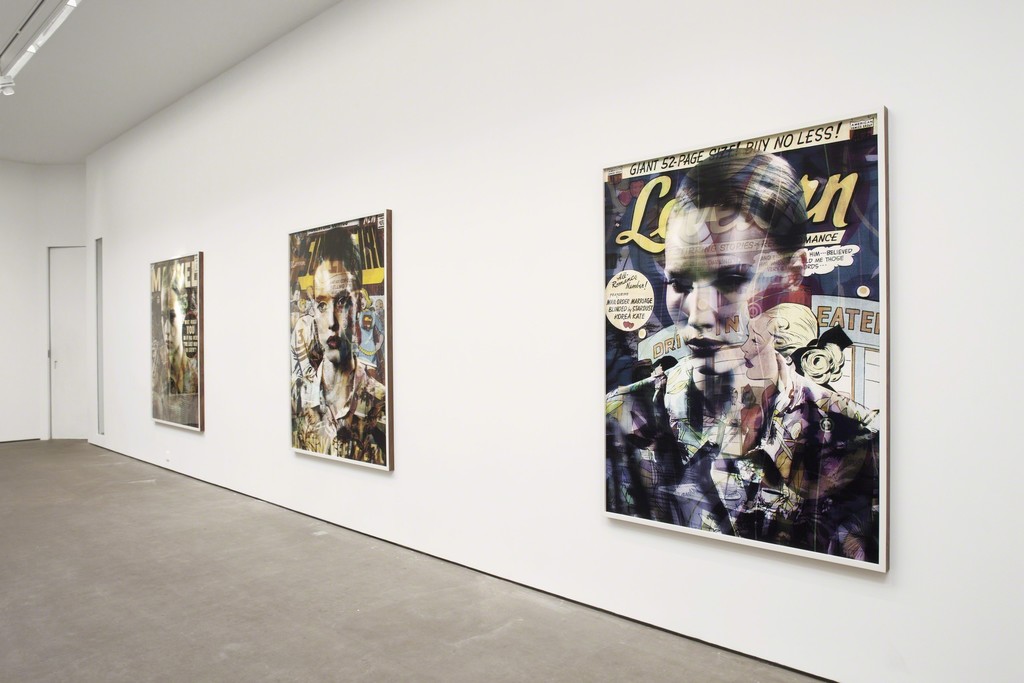 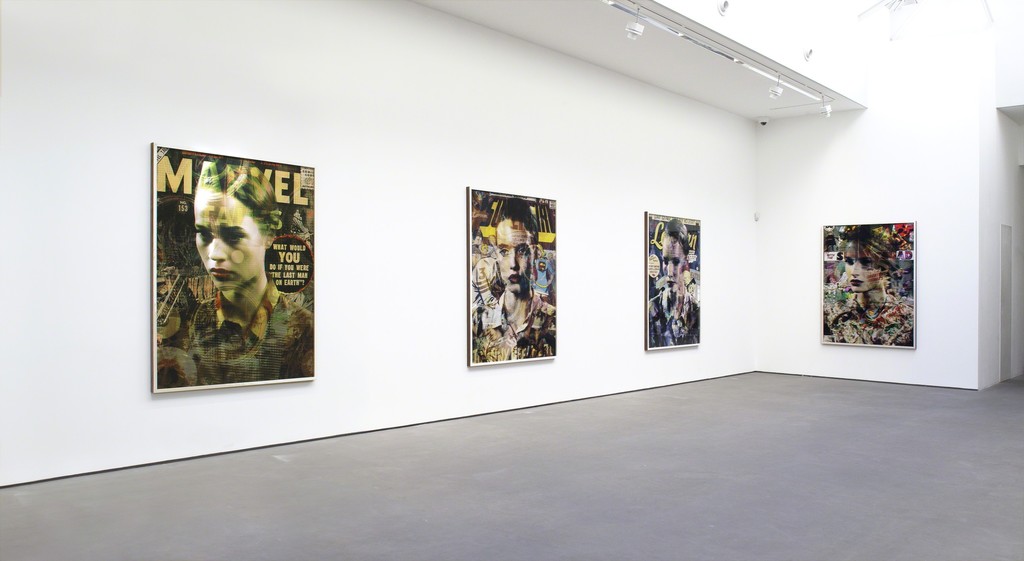 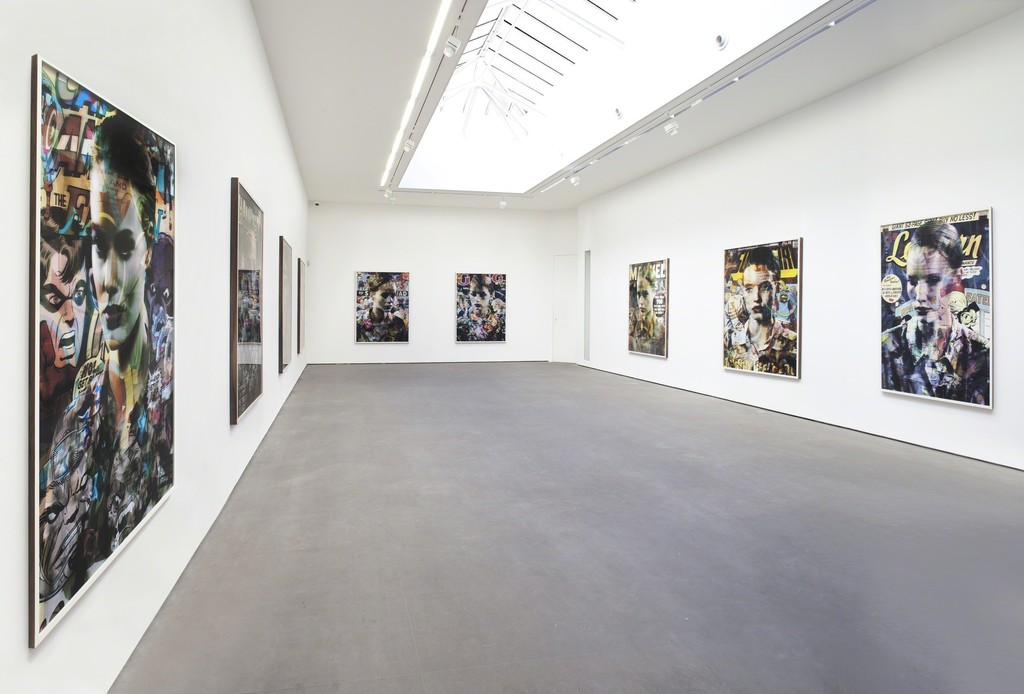 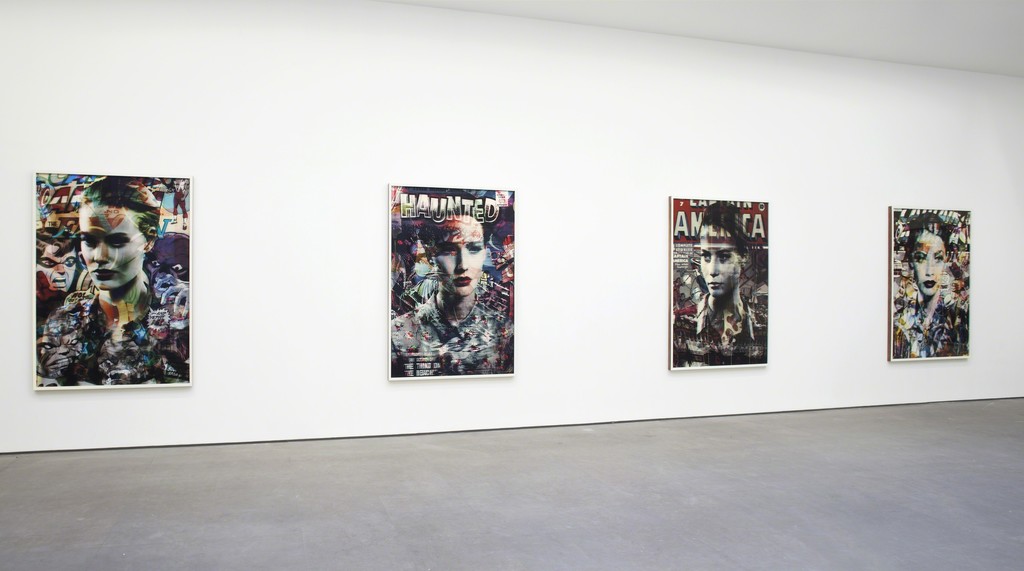 Galerie Nathalie Obadia is delighted to present All Star, the first exhibition by Valérie Belin in our Paris gallery, following on from her Still Life show at our Brussels gallery in 2014.

In this series, the artist uses the world of comics as a graphic, expressive material for setting up an “encounter” with figures that she has herself created. The encounter occurs through the medium of a sophisticated composition in which movement, line, motifs and relations of scale help created visual jolts (for example, we see drawn characters the size of a mouth or a neck, or oversize titles badged across particular parts of the heroine, such as the forehead or throat). The ensemble is peppered with vectorial decorative motifs found on the Internet, as in the previous series, Super Models (2015).

As the digital background to these photos, comics offer a narrative ground that is optimistic, high-spirited, naïve, fantastical and rather exuberant. Theirs is an expressive universe in which relations between individuals, actions and their goals are unambiguous. It is the world of the present moment, lived with all the dramatic intensity and sense of suspense that are its ingredients. This smooth-running and easy-to-understand microcosm interlocks with characters who seem absolutely alien to all its eddying, spontaneous and childlike energy.

These characters are women with a contemporary form of beauty. Their hair and make-up are natural and they wear elegant blouses in fresh, summery patterns chosen by the artist, and yet in contrast the style of their pose is depressive and the light is the raw light of a Parisian studio. Denatured by the addition of black and an almost metallic iridescence, the colours deliberately diverge from the naturalist palette and show us these characters’ mental or psychic reality more than their physical one.
Bursting in from the background, the world of comics interweaves with the texture of the portraits, traversing and penetrating and merging with them. This particular form of inlay presents an aesthetic and emotional contrast with the characters depicted, thereby highlighting their gloomy, anxious and tormented character.

From a fictional viewpoint, these young women, who seem to live in a closed world, find light only through the imaginary, drawn glow of comics: the brightness of a gaze, various reflections, the effect of an Ultra Brite smile, the angelic whiteness of characters or winged animals, the glint of a dagger, the smoke from explosives. The spiralling composition of the comics objectively translates the circular, obsessive character of the mental world in which these young women exist.

It thus seems as if contact with these “superheroines” possessed by their inner life is transmuting the world of comics and its joyous dynamic into a mental substance. Thus, the profusion of drawn elements (freefalling heroes, punches being landed, bubbles, block capitals, etc.) is condensed into a disorder or even a chaos that saturates the mental space of the characters. By their dark, almost apocalyptic tone, these portraits are close to the spirit of dark fantasy, a sub-genre of fantasy literature in which distinctions between good and evil disappear, giving way to moral ambiguity and egotistical actions. In this regard, these heroines can be considered as Hitchcockian victims whose vengeance will soon make itself felt. Each reveals the invisible mechanisms at work at both the individual and collective levels.

This new series explores a set of themes that run through all this artist’s work. It is the expression of a chaos already explored in the series Still Life (2014), which showed the disorder of consumer society. In this latest series, All Star, Valérie Belin explores the toxicity of a mental world that is chaotic, agitated, saturated and obsessive.

In support of All Star, Éditions Damiani will dedicate the second large monograph on Valérie Belin, featuring her work from 2007 to 2016. The first was published by Éditions Steidl and focused on her work between 1993 and 2006. This new publication will present essays by Quentin Bajac, Dork Zabunyan and Étienne Hatt.

Born in Boulogne-Billancourt (France) in 1964, Valérie Belin lives and works in Paris (France).

She graduated from the École Nationale des Beaux Arts de Bourges (1983–88) and gained a DEA (the equivalent of a Master of Advanced Studies) in Philosophy of Art at the Université Panthéon-Sorbonne in Paris (1989). Today she is one of the best-known artists on the French contemporary art scene and has a high international profile.

Valérie Belin’s work has been given a number of important solo exhibitions, in particular Les Images intranquilles at the Centre Pompidou in Paris (France, 2015), Surface Tension at the DHC/ART in Montréal (Canada, 2014), Illusions of Life at the Multimedia Art Museum in Moscow (Russia, 2014), O ser e o aparecer at the Casa Franca-Brasil in Rio de Janeiro (Brazil, 2011), Hungry Eyes at the FotoMuseum Provincie in Antwerp (Belgium, 2011), Valérie Belin: Made-up at the Peabody Essex Museum in Essex (USA, 2009), and Correspondances at the Musée d’Orsay in Paris (France, 2008), the Musée de l’Élysée in Lausanne (Switzerland, 2008), the Maison Européenne de Photographie in Paris (France, 2008), and the Huis Marseille – Museeum voor fotografie in Amsterdam (Netherlands, 2007).

Valérie Belin won the Prix Pictet in 2015 for her project Disorder. The travelling exhibition of which it is a part is being presented between 2015 and 2017 at Somerset House (UK), the MAXXI in Rome (Italy), the CAB Art Center in Brussels (Belgium), the International Red Cross and Red Crescent Museum in Geneva (Switzerland) and the Westbau in Zurich (Switzerland). Valérie Belin is currently participating in Barbie at the Musée des Arts Décoratifs and her work will also be shown in Golems. Avatars Contemporains at the Musée d’Art et d’Histoire du Judaïsme (France) in spring 2017.

Valérie Belin is represented by Galerie Nathalie Obadia since 2013.