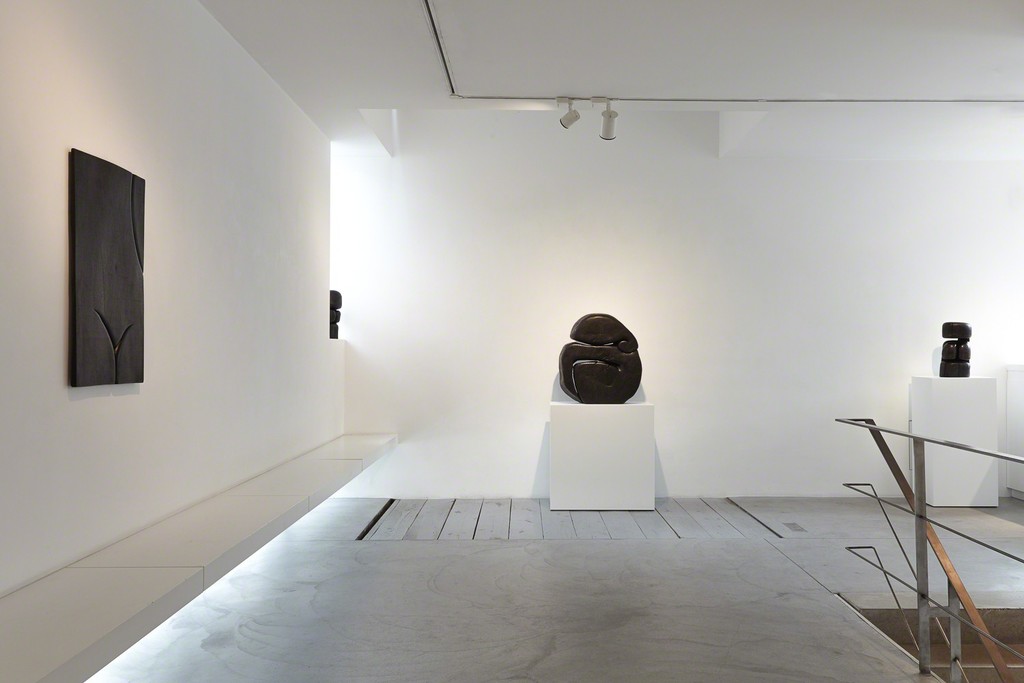 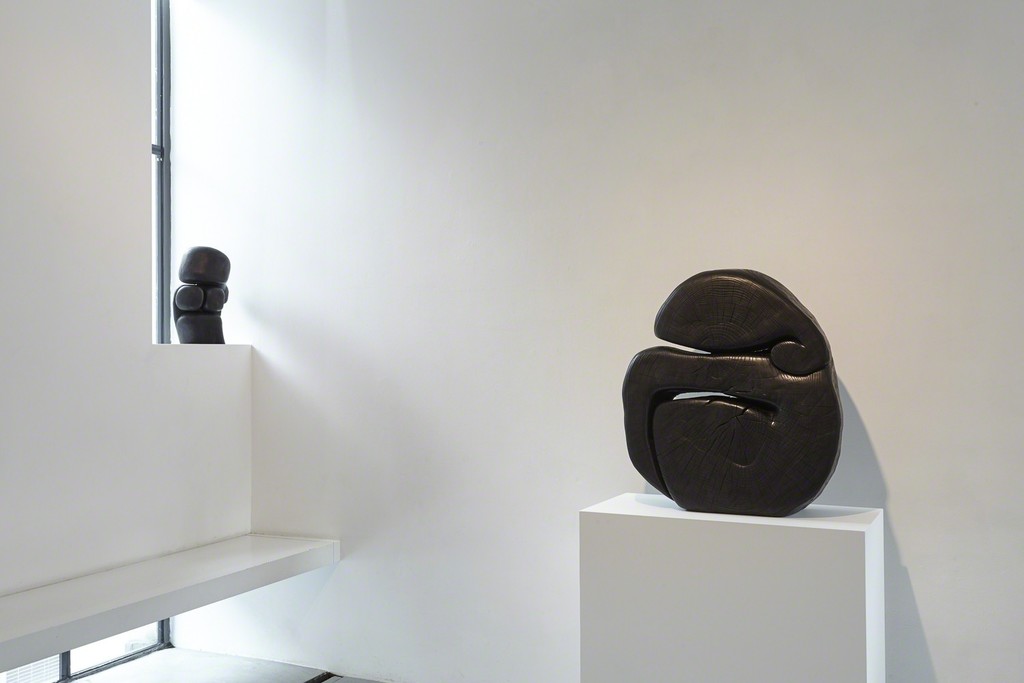 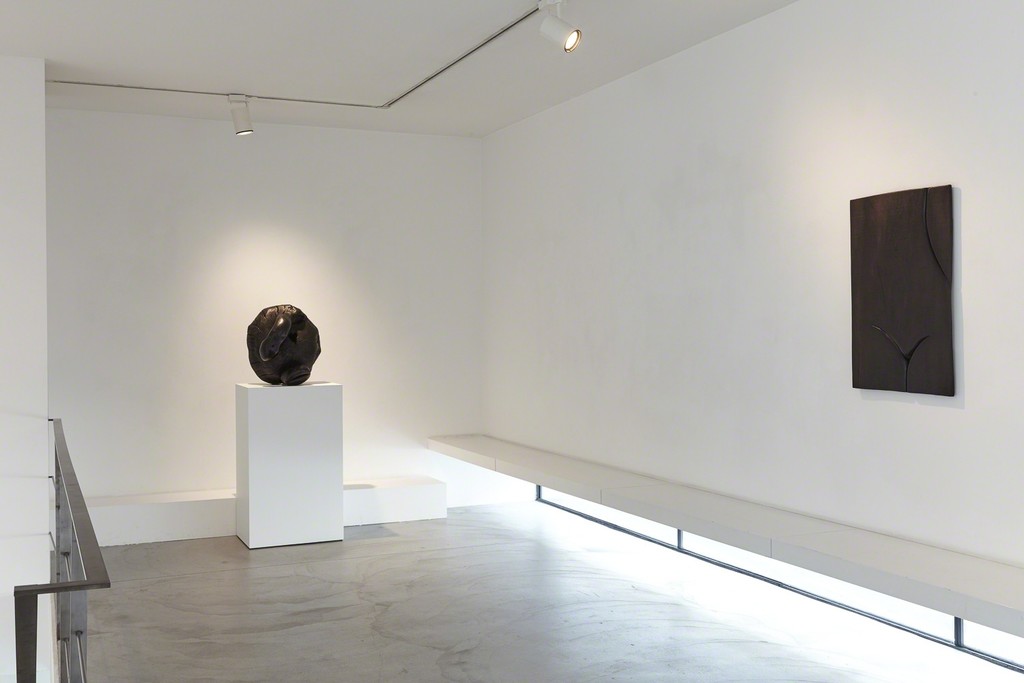 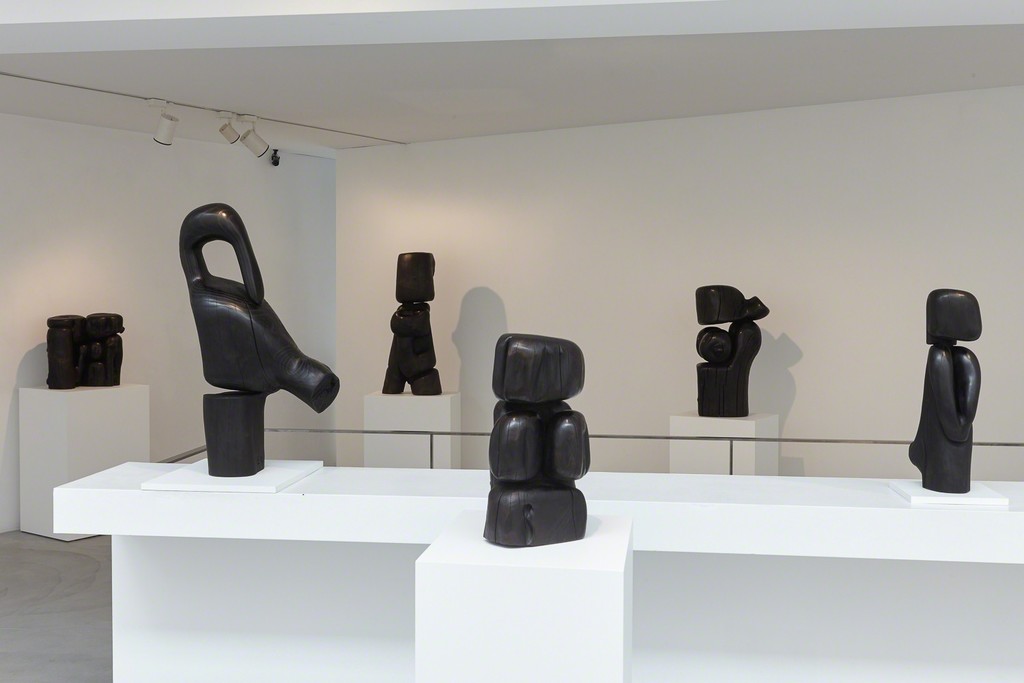 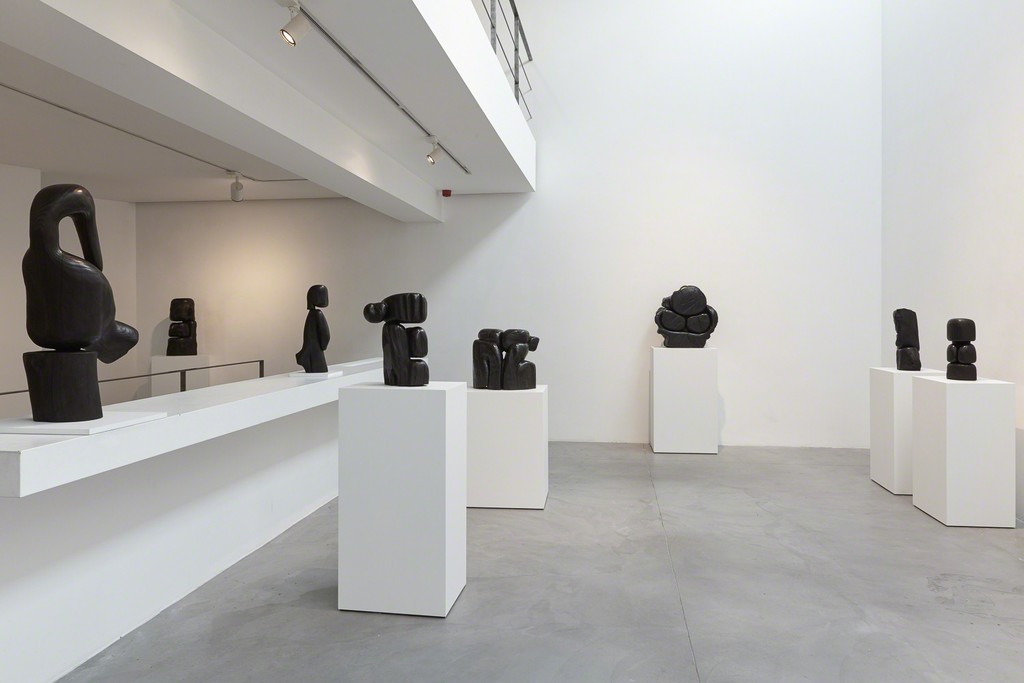 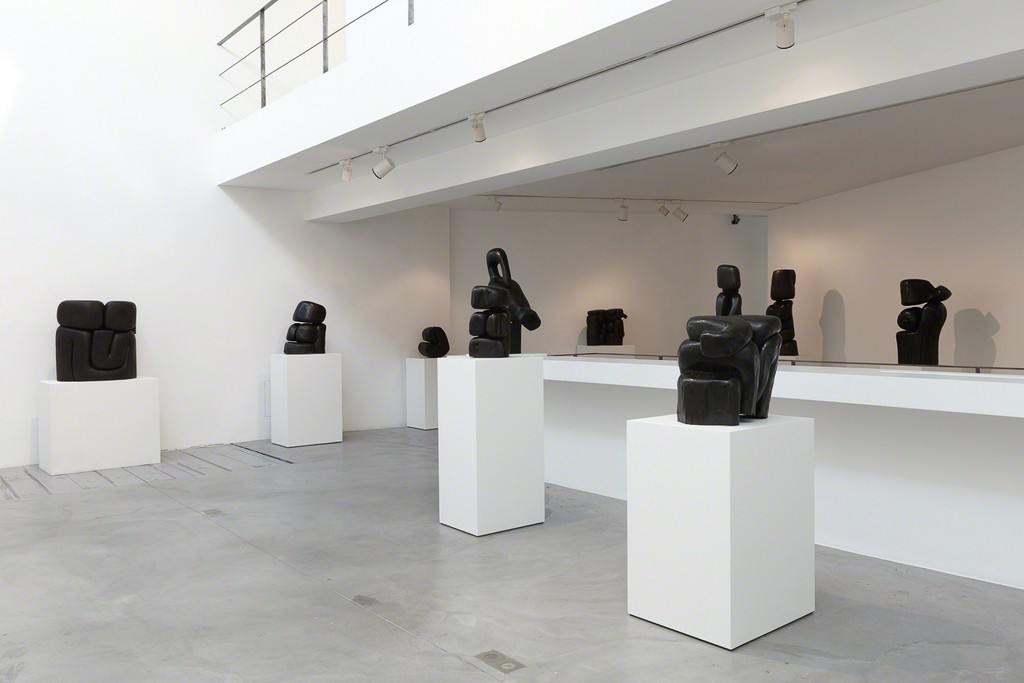 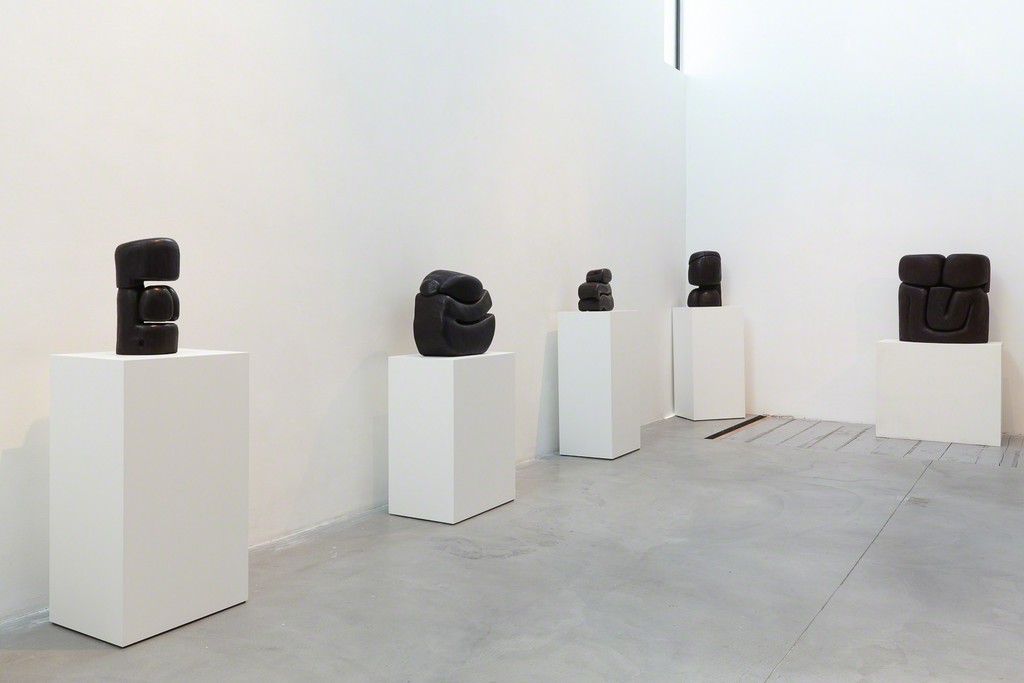 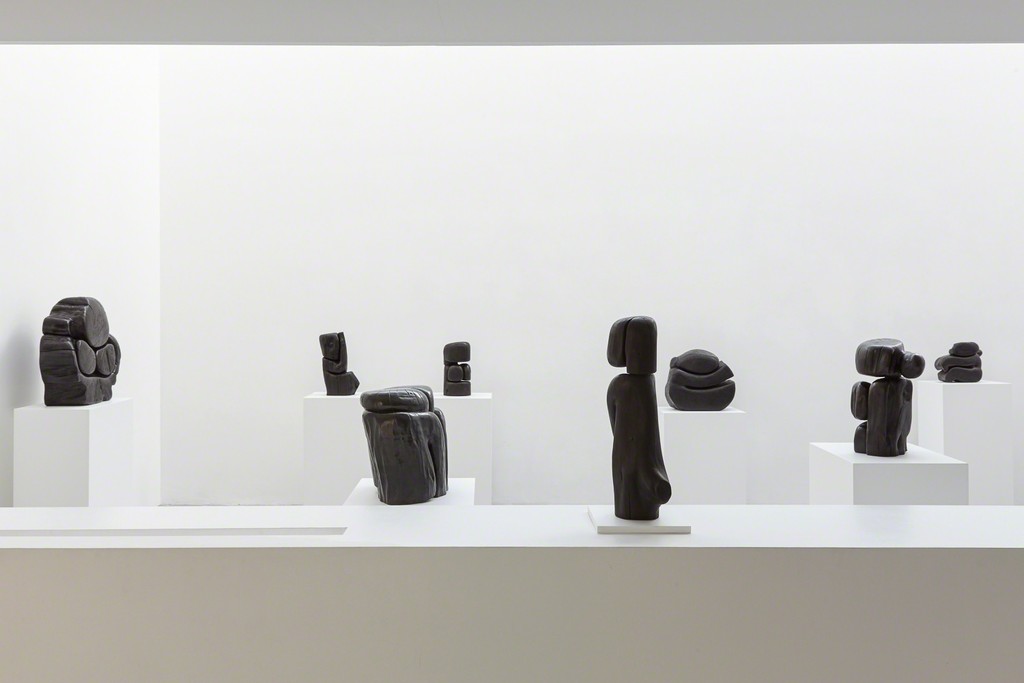 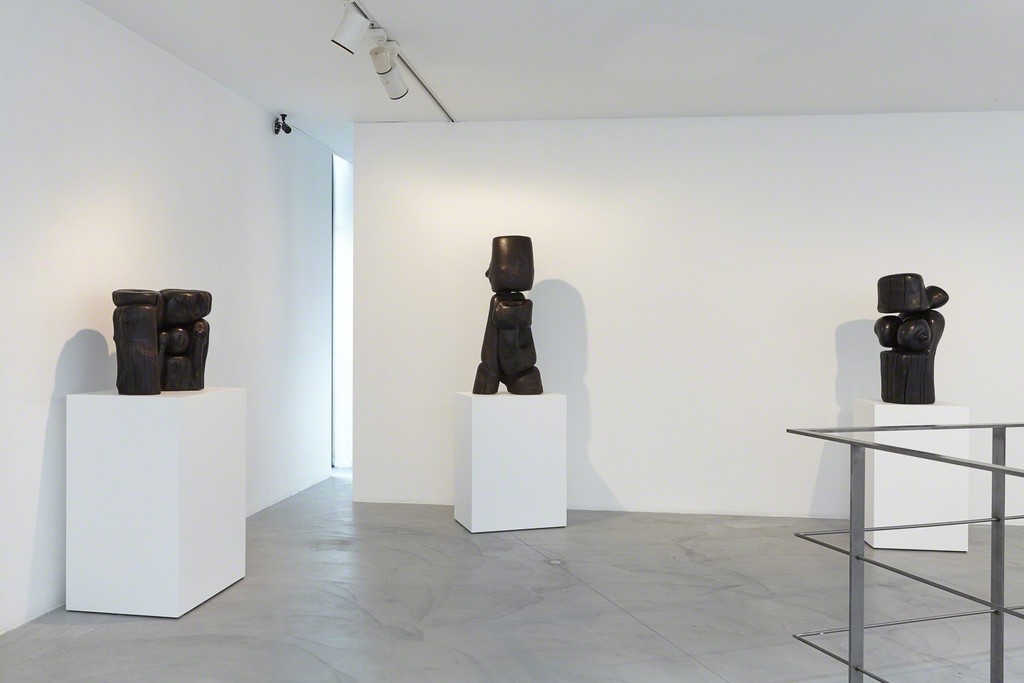 Galerie Nathalie Obadia is very pleased to present Simplicité-Nature-Sensualité, Wang Keping’s first solo in Belgium. An exclusive event since the artist, born in Beijing in 1949, is one of the founding fathers of Chinese contemporary art and recognized as such in his own homeland despite his political exile in 1984. In France, his adoptive land, he has since then built a work internationally considered among the most impacting and original contributions to contemporary sculpture.

While still a student, Wang Keping was enrolled as a Red Guard in 1966 at the beginning of the Proletarian Cultural Revolution, before being deported in the countryside in order to be “reeducated” under very rough circumstances. Back from the North-East of China, Wang Keping tried to find his place as an intellectual within the Chinese society, first as a comedian, then as a scriptwriter for China Central Television in Beijing. But seeing his writing ambitions quickly impeded by the regime censorship, he briefly turned to painting before dedicating himself to sculpture as a self-taught artist. Wood being a rare material in China, his very first piece was made out of a chair stretcher. An arm stretched toward the sky coming out a screaming face and holding Mao’s Little Red Book, as a reference to the agitated context of the Cultural Revolution. Stunned by this first sculpture, Bai Jinghzou, a painter and friend, encouraged him to continue.

Wang Keping had found his signature medium and his small studio-house quickly filled up with a wide range of sculptures inspired by drama and politics. Artists Huang Rui, Ma Desheng, Acheng, Qu Leilei and Li Yongcun, who were the firsts to see them, immediately invited the young prodigy to participate in their art exhibition project against official art. A group of non- conformist artists was born. They called themselves “Xing Xing” (The Stars). “We were the only glimmers in the middle of an endless night”, remembers Wang Keping.

Their infamous deed was an illegal exhibition on the metal gates of the National Art Museum of China in Beijing on September 27th, 1979. Prohibited the following day, the exhibition was immediately dismantled. On October 1st, the Stars gathered to denounce the censorship of which they were victims and loudly protested to ask for the “freedom of Art” on the symbolic day of the 30th anniversary of the People’s Republic of China.

Because it was the first of its kind in China, the event received international media coverage, especially in the New York Times that chose Wang Keping’s sculpture entitled Silence for its issue cover of October 19th, 1979. This media exposure immediately turned the work into a symbol of artistic dissidence in the world. This icon of the first Chinese contemporary art represents a head distorted by pain and obstructed in its vital functions: one-eyed, deprived of nostrils with a mouth sealed by a cylinder. For Wang Keping, this face was and still is the “symbol of our lack of freedom”, “the impossibility to express what we hold deep inside”.

A year later, the Stars were back at the National Art Museum of China in Beijing thanks to the support of the president of the official artists association. On this occasion, Wang Keping presented a second manifesto entitled Idole, a portrait of Mao Zedong as Buddha, which, for the artist, refers to the “deification of the communist party and the cult of idols during the Cultural Revolution”. During sixteen days, over a thousand people came to visit, a lot more than for any other art exhibitions ever organized in China. This unexpected success spread panic among the upper reaches of power. A wave of repression followed, which marked the end of the Beijing Spring and with it, that of the Stars, which founding members mostly went into exile; to the United States for Ai Weiwei, Acheng and Yan Li; Switzerland for Ma Desheng; Japan for Huang Rui and the United Kingdom for Qu Leilei. As for Wang Keping, he followed his wife Cathering Dezaly (a French teacher at the University of Beijing) to France in 1984.

Two things struck Wang Keping when he arrived in France: the amount of goods in shops and the vastness of forests. He also rushed to museums where he discovered primitive arts and Western modern art he knew nothing about. The only sculptor he then knew was Auguste Rodin. Henri Moore, Alberto Giacometti and especially Constantin Brancusi, to whom he is most often compared for his art of simplifying shapes, had not entered his artistic pantheon yet. What was most remarkable in this sudden exposure to Western art is that it confirmed the exiled artist in the search of his own path. “Visiting museums gave me a better knowledge of myself”, he explained. ”I understood that I was completely different and continued to follow my own path”.

This belief takes root deep down in his Chinese culture imbued with Chan philosophy (became Zen when imported from Japan), which praises meditation, withdrawal and detachment. Bertrand Lorquin, curator at the Musée Maillol in Paris, explains that “this personal philosophy of life, leaving the mind its freedom and independence”, allowed Wang Keping “to develop the barest, most direct and essential sensitivity”. His constant search for simplicity translates into the simplifying of shapes. Even tough symbolic, his works flirt with abstraction but keep a figurative dimension which reveals itself only when taking the time to interpret the depth of the organic matters from which the works originate.

To reach purity, Wang Keping mostly listens to nature, his great source of inspiration. “Wood whispers secrets in my ears”, he says. “Trees are like human bodies, with rough and soft parts like bones and flesh, sometime strong sometime fragile. I cannot go against nature. I can only follow it for it agrees to work with me.”

In the quietness of his new French studio, the dissident artist was able to put his political fight on hold and entirely dedicated himself to formal experiments. “In the female body –which, for the artist, is the origin of representation and of the desire to create- (he found) the simple, full and primal shapes he wanted to sculpt: life, energy, germination and growth” as explained by Sylvain Lecombre, curator of the Wang Keping retrospective exhibition held the Zadkine Museum in 2010.

Wildlife is another of Wang Keping’s favorite themes. “I represented a lot of animals but it was not with realistic intentions. I was looking to capture wildness, like these birds with big mouths always open. Besides, there is a link between the branch and the bird, like there is one between figuration and abstraction, primitive and modern art.”

Choosing pre-existing wood shapes and “revealing” them is a great challenge for a sculptor looking to reinvent representation. In order to succeed, he paradoxically choses to evoke the past: that of his spiritual and artistic ancestral heritage. Taoism, one of the three pillars of Chinese thinking infuses his vision of nature, while ancient statuary from the Han dynasty (206 B.C.- 220 A.C.) as well as folk art from Chinese countryside remain the matrix of his work.

“In my sculptures, I am looking for what might be universal in the primitive Chinese form, and the farthest back I go in the origin of this art, the closest I get to my vision of contemporary art”, explains Wang Keping. Bertrand Lorquin well understood the conversion of this heritage into a singular creative approach, which, according to him, goes beyond “any notion of style”, except that of nature itself. It is the reason why Wang Keping’s works always keep something of the shape or look of the wood piece they came from. ”Part of it was already sculpted by nature.”

The other part –which cannot go unnoticed- is the extreme attention and care Wang Keping gives when shaping the surface of his sculptures. First, his polishing process erases all tool marks. This step enhances the grain, cracks and knots of the wood the artist so skillfully works with. The wood is then carefully burned to reach a unique hue. “I use blowtorch like a paintbrush: applying light strokes” he explains. The texture thus obtained is an invitation to feel the material become as smooth and soft as skin. It is precisely his ability to enhance the carnal dimension of wood that inspired Wang Keping the title of his exhibition “La Chair des forêts” (the flesh of the woods) held at the Zadkine Museum.

The present exhibition held at the Galerie Nathalie Obadia of Brussels gathers about twenty exclusive artworks by Wang Keping and captures the essence of a work admired for nearly four decades. Witness of its quiet birth, British historian of modern and contemporary Chinese art Michael Sullivan (1916-2013) has warned us against too much explanation and theoretic analyses to describe Wang Keping’s sculpture. It “can stands on its own”, he wrote, since “its meaning lays in its form. And what a form!” Wang Keping’s sculptures exude a sort of primitive aura that inspires viewers a feeling of fulfillment.