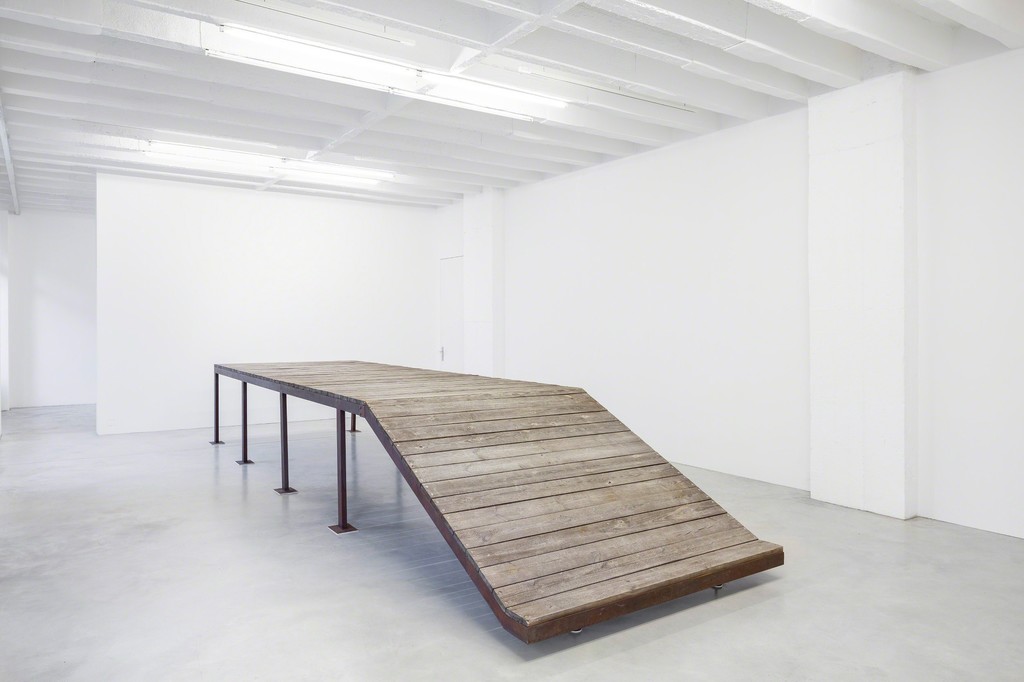 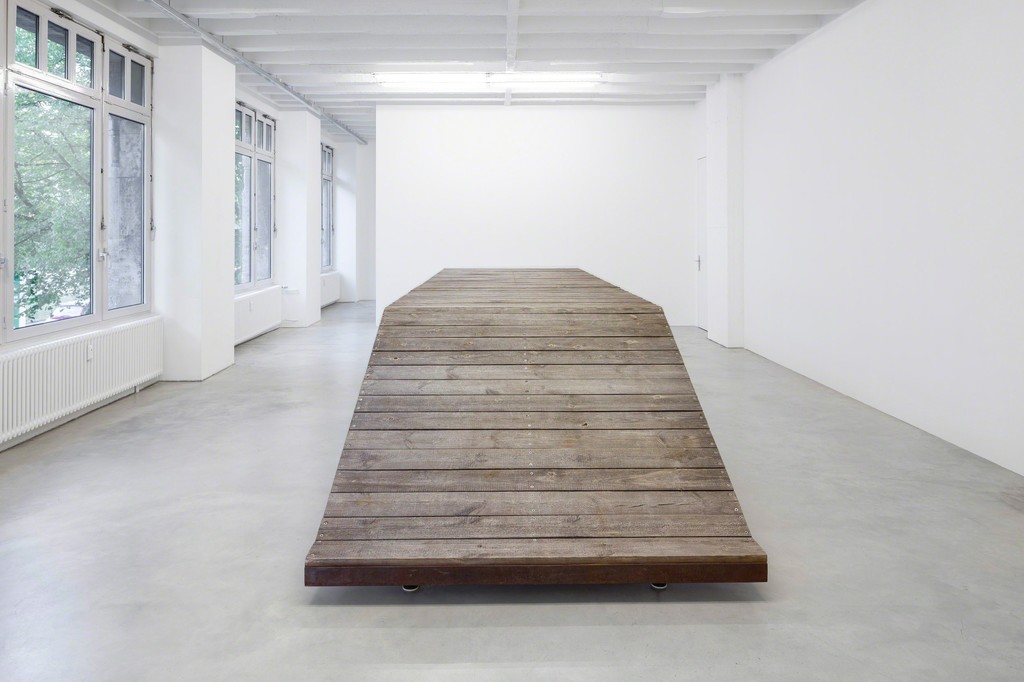 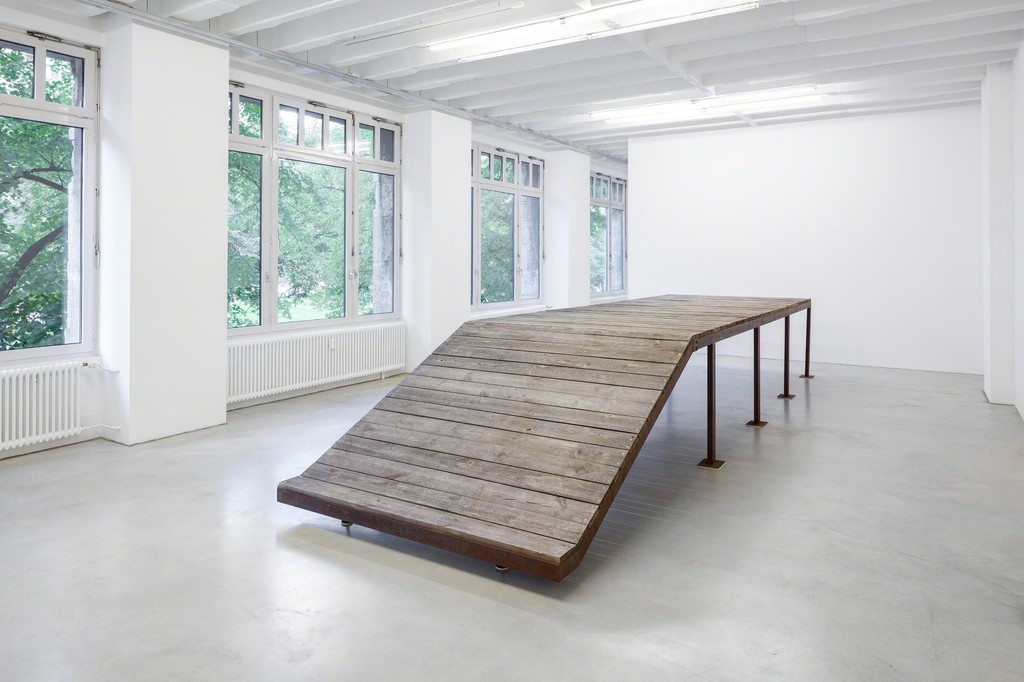 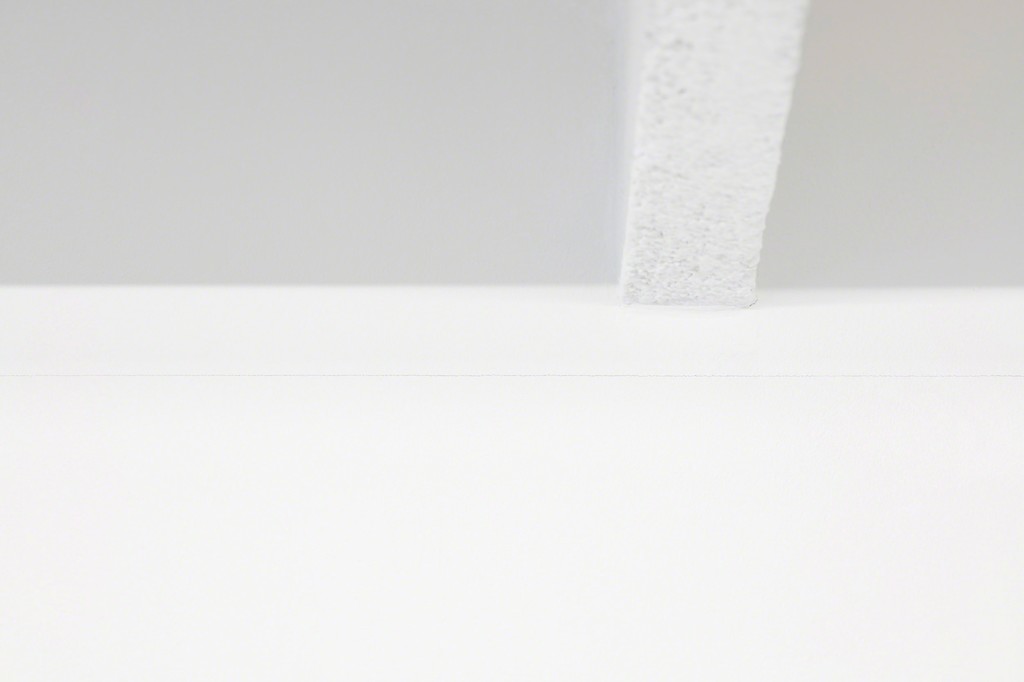 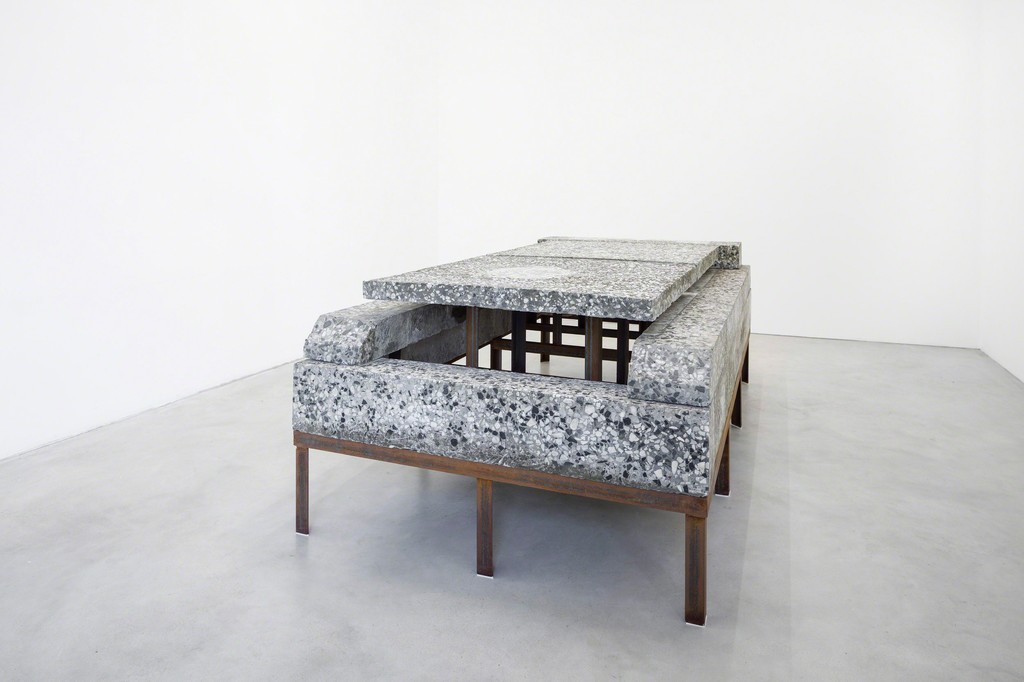 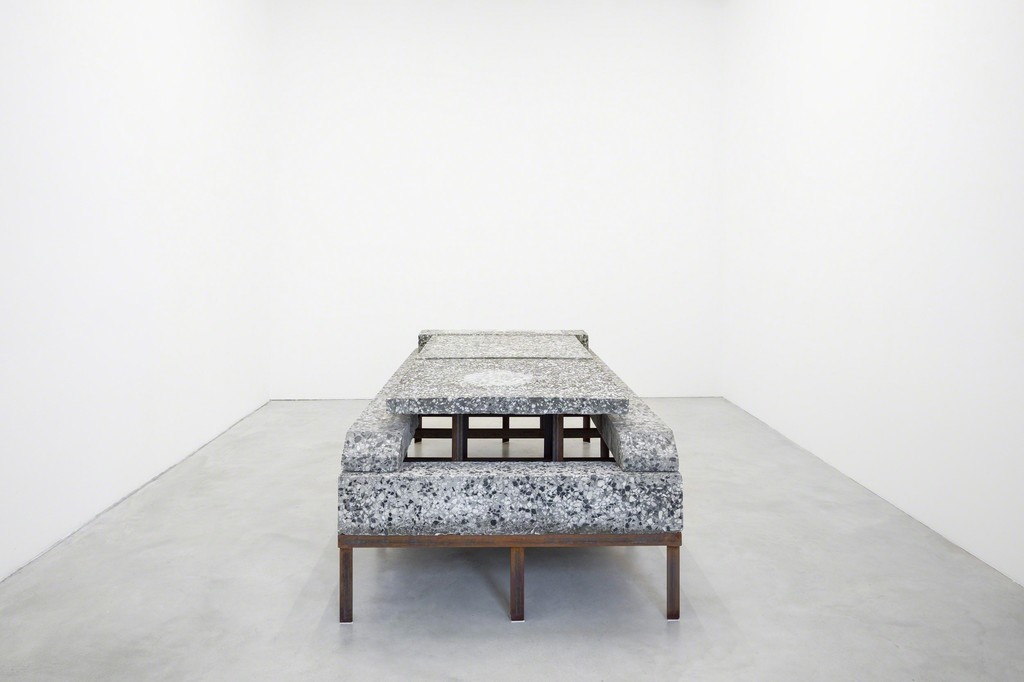 In his eighth solo exhibition at the gallery, Mirosław Bałka presents among others two sculptures that bring together two major subjects of his artistic work: individual memory and collective memory. A central concern of the artist’s work in general is identifying personal memory within the context of historical memory.
For the first time, Bałka’s large sculpture titled “690 x 190 x 102,” from 2006, will be on view indoors. The artist has placed it in the first room of the gallery with its sloped side facing the viewer like a ramp, so the sculpture can be walked on as a platform. Planked with used wood, the sculpture is sized to hold several bodies at the same time. Unlike his installation for the Turbine Hall of Tate Modern, “How It Is,” where the ramp leads into a space of unfathomable darkness, this ramp ends in a horizontal plane facing the empty wall of the gallery, thus functioning like a walkway that leads virtually into nothing. The ramp elevates the viewer’s position to 102 cm above the floor, and the artist emphasises this change of perspective with a drawn line running across all walls of the space. This alternative horizon is positioned exactly at the very height Bałka (who is 190cm tall) can reach when he is standing on the ramp with his arms outstretched. Small pieces of felt placed under the steel legs of the massive sculpture create a distance from the ground we are walking on and in addition represent a warm and soft counterpoint to the hard, industrial material.
“690 x 190 x 102” is part of a group of large sculptures and installations Bałka has been producing since the mid 1990s, which focus on his reflections on collective experiences. In some of these, especially his film works, the artist explicitly references the Holocaust for the first time. For the opening of “Ein Auge, offen,” Mirosław Bałka will hold an artist talk during which “690 x 190 x 102” will function as a seating platform for visitors: an agora. In fact there is a relation to the artist’s “active openings” of the 1980s where he involved the visitors in his performances.
“229 x 118 x 75,” the new sculpture on view in the smaller, more intimate space of the gallery, seems to continue Bałka’s work from the 1990s relating to the individuum. Developed after the artist’s break with figuration, these radically austere, geometric sculptures evoke the human body by metonymy: that is, through the forms, measures, and materials bound to it. They articulate the absent body by suggesting objects that house, support, or surround it. “229 x 118 x 75” consists of loosely stacked terrazzo slabs, based on the measurements of the artist’s body, elevated from the floor by a steel frame and small pieces of felt. The aged terrazzo originates, like many of his materials, from the artist’s family home in Otwock, Poland, and had been used by his grandfather, a stonemason, for gravestones. In this work the simple, inexpensive artificial stone achieves a dignified status. The inside of the sculpture is hollow and faintly lit by a naked lightbulb. Consequently, a dialectic between bed and stretcher, grave and shelter, light and dark, absence and presence unfolds. As in the work “690 x 190 x 102,” an undefined state of in-betweenness and transition becomes intelligible.
The title of the exhibition, “Ein Auge, offen” (An eye, open), references a poem by Paul Celan, and indeed, Bałka’s work seems to share many aspects of Celan’s condensed poetry. As with reading Celan, Anda Rottenberg pointed out, one can view these sculptures time and time again and ponder their constituent parts—the shape and dimension of their forms, the manifold ways of carefully constructing narratives, as well as the visible and invisible stimuli and their reciprocal relations. Ultimately, it is the viewer’s diverse experiences and emotions that complement seemingly Bałka’s abstract works.

Mirosław Bałka was born in 1958 in Warsaw, Poland, and lives and works in Warsaw and Otwock. Since 2010 Bałka has been a member of the Akademie der Künste, Berlin. He was awarded the Mies van der Rohe Award of the Kunstmuseen Krefeld. He participated in the Venice Biennial in 2013, 2005, 2003, and 1990, representing Poland in 1993, as well as the Biennial of Sydney (1992 and 2006), SITE Santa Fe Biennial (2006), São Paulo Biennial (1998) and documenta IX (1992). In 2009 the artist undertook the tenth commission in the Unilever Series for the Turbine Hall at the Tate Modern, presenting “How It Is.”
His exhibition “Die Spuren” will be on view at Museum Morsbroich, Leverkusen (Sept 24, 2017–Jan 7, 2018). It is the final instalment in a trilogy of retrospective exhibitions, starting in 2015 with “Nerve.Construction” at the Museum of Arts Łodz, and continued in 2017 with “CROSSOVER/S” at Pirelli HangarBicocca, Milan. Selected solo exhibitions include furthermore: Freud Museum, London (2014); Centre for Contemporary Art, Vinzavod, Moscow (2013); Akademie der Künste, Berlin (2011); Museo Reina Sofia, Madrid,and Staatliche Kunsthalle Karlsruhe (both 2010); Museu de Arte de São Paulo and Museu de Arte Moderna Rio de Janeiro (both 2007); K21, Düsseldorf (2006); Museum of Contemporary Art, Strasbourg (2004); Zacheta National Gallery of Art, Warsaw, and SMAK, Ghent (both 2001); National Museum of Art, Osaka (2000); Museu Serralves, Porto (1998); Tate Gallery, London (1995); Van Abbemuseum, Eindhoven (1994); and Renaissance Society at the University of Chicago (1992).

Please contact the gallery for further information and press images.