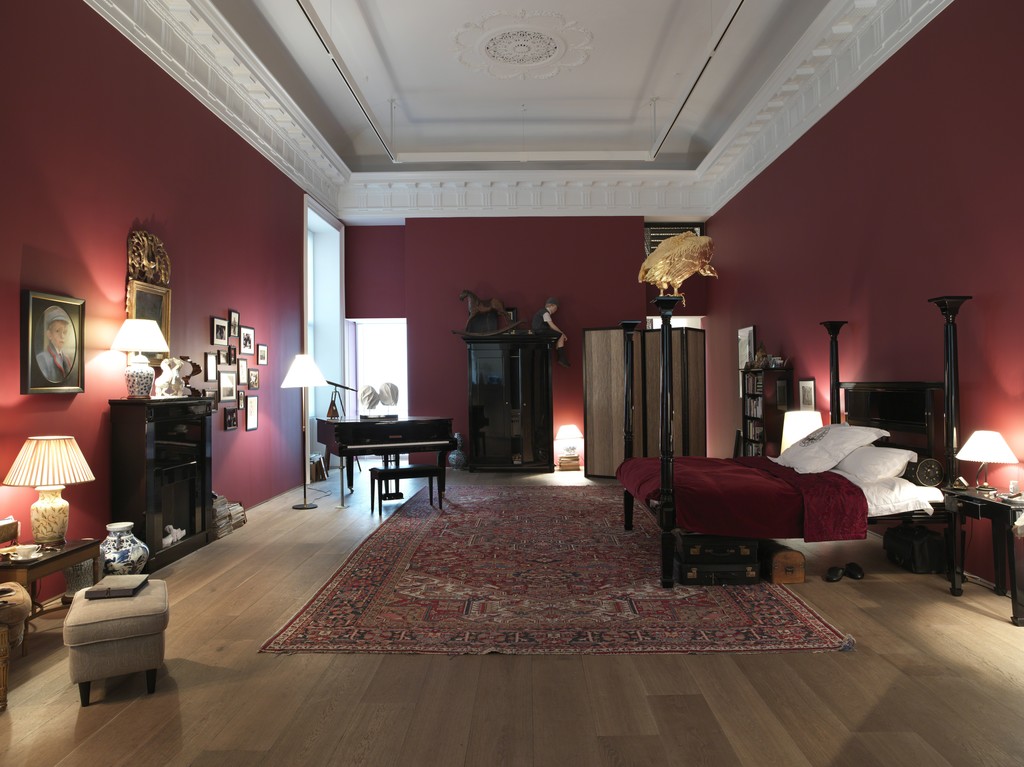 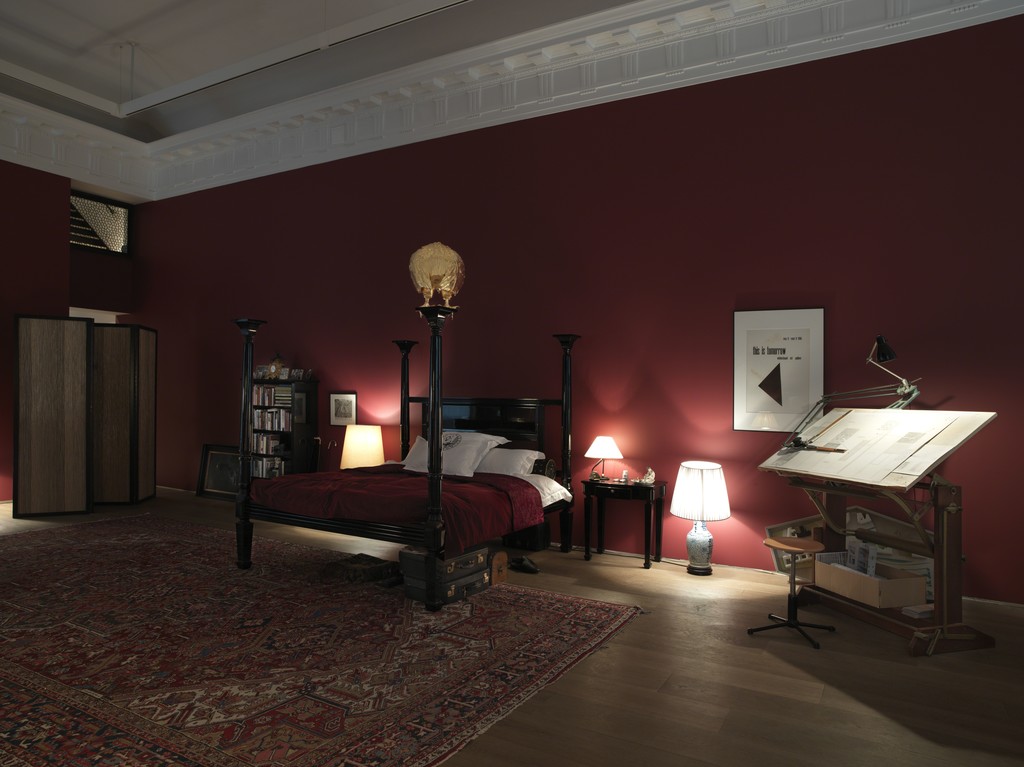 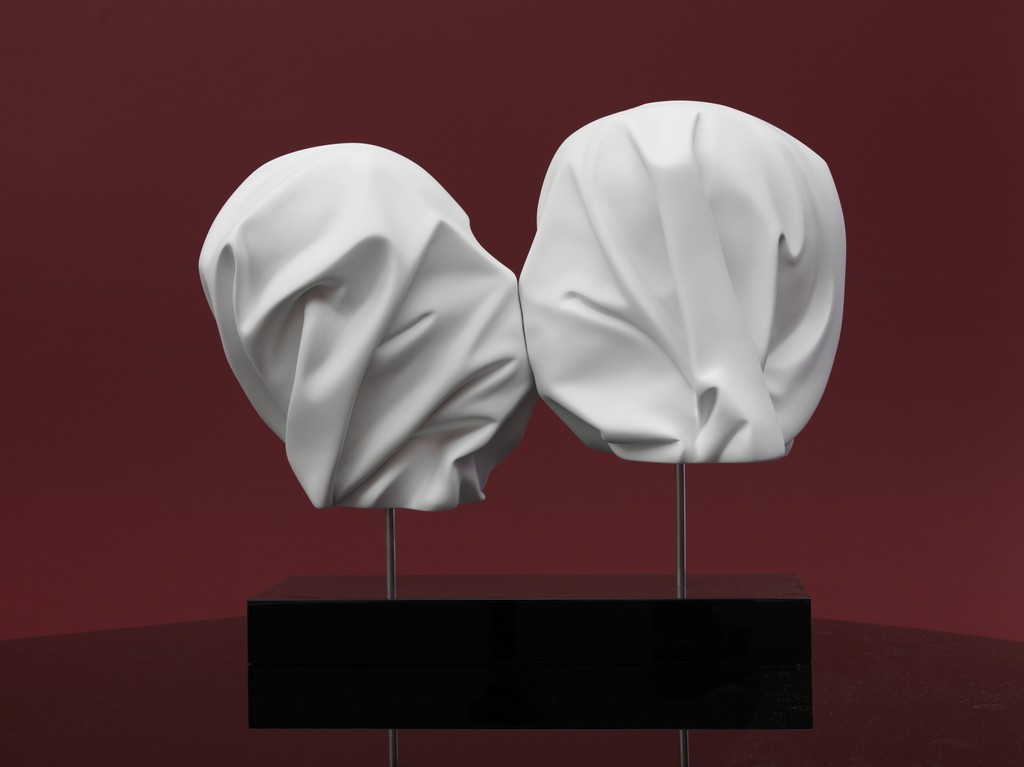 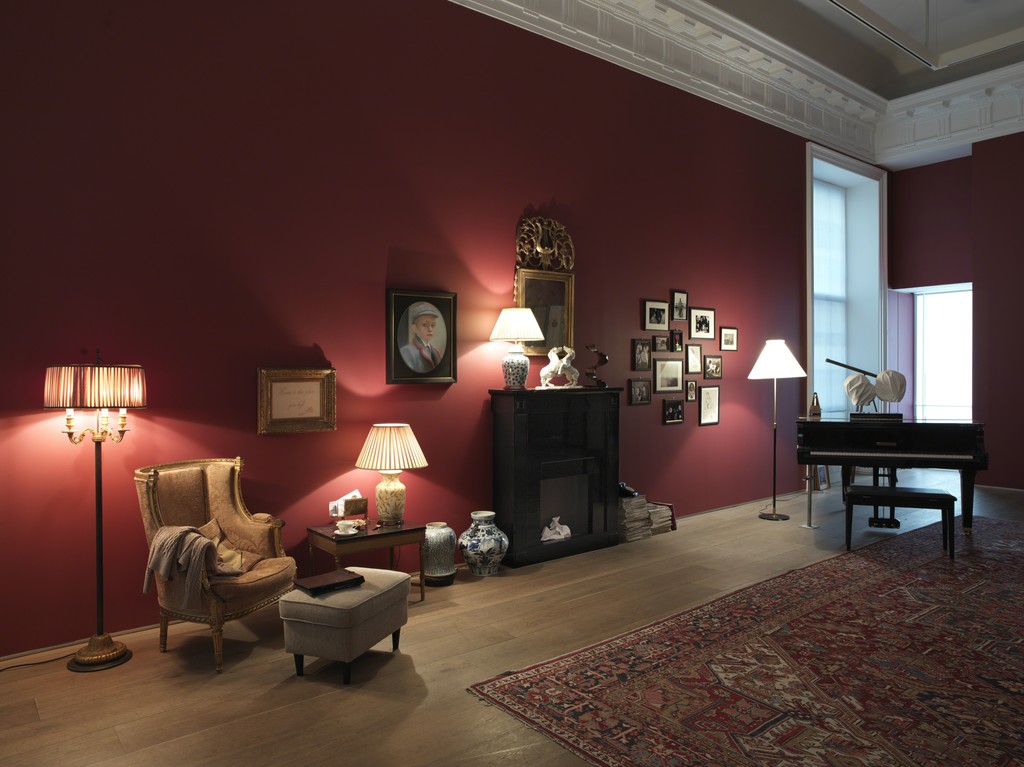 Galerie Perrotin New York is pleased to present “Past Tomorrow”, a solo exhibition by Elmgreen & Dragset. Continuing the artist duo’s interest in creating new narratives by staging psychologically charged domestic interiors, this installation transforms the gallery space into a densely furnished bedroom. Norman Swann – the bedroom’s fictional, absent inhabitant – first appeared as the protagonist in Elmgreen & Dragset’s 2013 exhibition “Tomorrow” at the Victoria and Albert Museum in London, where the artists turned a section of the museum into Mr. Swann’s grand family home. “Past Tomorrow” at Galerie Perrotin New York follows the life of Mr. Swann, an elderly, disillusioned and failed architect, after his inheritance runs out and he is forced to leave his home in London’s South Kensington neighborhood, resettling in a smaller apartment in New York’s Upper East Side. The exhibition now focuses solely on his bedroom, which is lled with elements related to his turbulent biography and the nostalgia, sorrows and regrets of his personal life. The story of Norman Swann is the story of growing older, of values shifting over time. An old man whose lifestyle and beliefs are grounded in the past and no longer align with contemporary culture, Swann’s character can be regarded as a metaphor for “old Europe”, stubbornly
refusing to face its changed position within the world.

The detailed environment draws inspiration from late 19th-century interior paintings, as did lms directed by Ingmar Bergman or Luchino Visconti. Like a lm set for a movie that was never made, the installation’s artifacts, books, personal items and everyday props are all used to describe a long, sometimes disappointing, life. Dark, red walls surround an imposing, black lacquered bed in the center of the room – a work entitled “Omnes Una Manet Nox”, which translates to “One Night Awaits Us All.” Perched on top of one of the bedposts is a gold-plated vulture. Titled “The Critic”, the vulture gure has recurred in all of Elmgreen & Dragset’s recent solo exhibitions in varying formats, materials and sizes. The room is furnished with a selection of custom and ready-made, classic European-style furniture positioned together with altered or specially made decorative items. On the walls hang photographs and sketches depicting scenes from Mr. Swann’s life in London and New York.

A half-open nightstand drawer reveals small boxes and bottles of prescription medications with labels like “Truvada” and “Prezista”, medicines used to treat HIV. Due to the development of drugs like these, HIV no longer inevitably leads to a premature death. But lower mortality rates have unfortunately led to a decrease in media attention and public information about the illness. Swann’s personal tragedy is shown here in contrast to a never-ending hunger for sensational news headlines. Elmgreen & Dragset’s character Mr. Swann is a symbol of a generation for whom the AIDS crisis came as a life-altering shock in the early 1980s. However, having survived the epidemic, he now faces a retirement age that for him was neither expected nor planned. “Past Tomorrow” addresses the issue of aging: What place does the complexity of a mature individual’s winding past hold in a society obsessed with youth?

Norman Swann’s biographical story as it is told by Elmgreen & Dragset is not a linear one. Mr. Swann’s persona is portrayed by mixing together dif- ferent time periods and locations, cutting and pasting details and scenes from this ctional character’s life, as in a novel by Robbe-Grillet or Le Clézio.

A booklet containing further clues about Norman Swann’s history will accompany the exhibition.