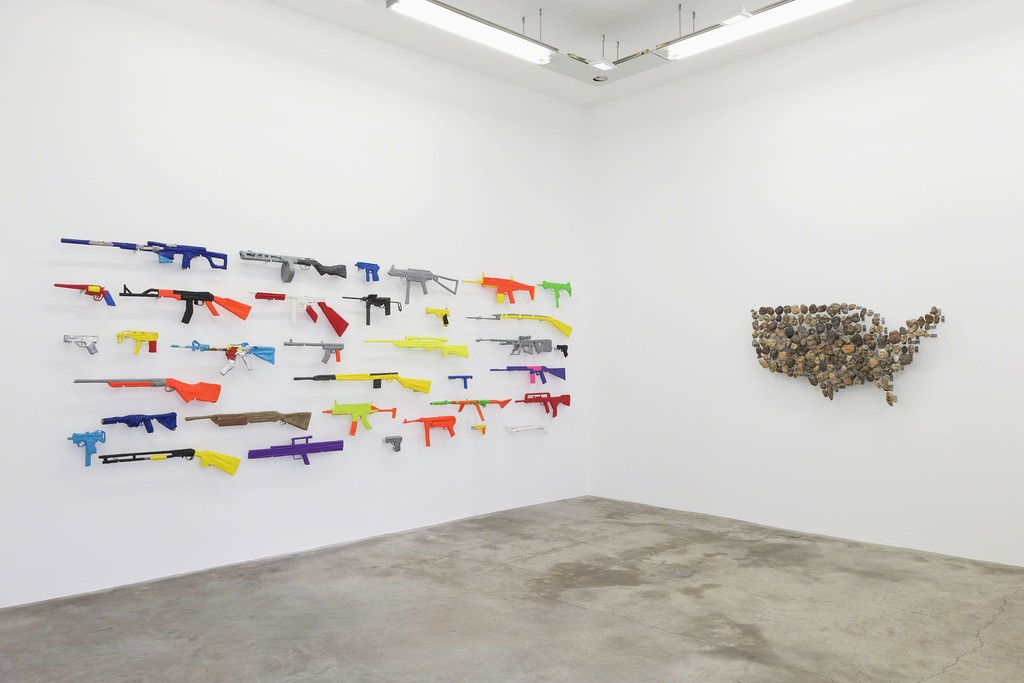 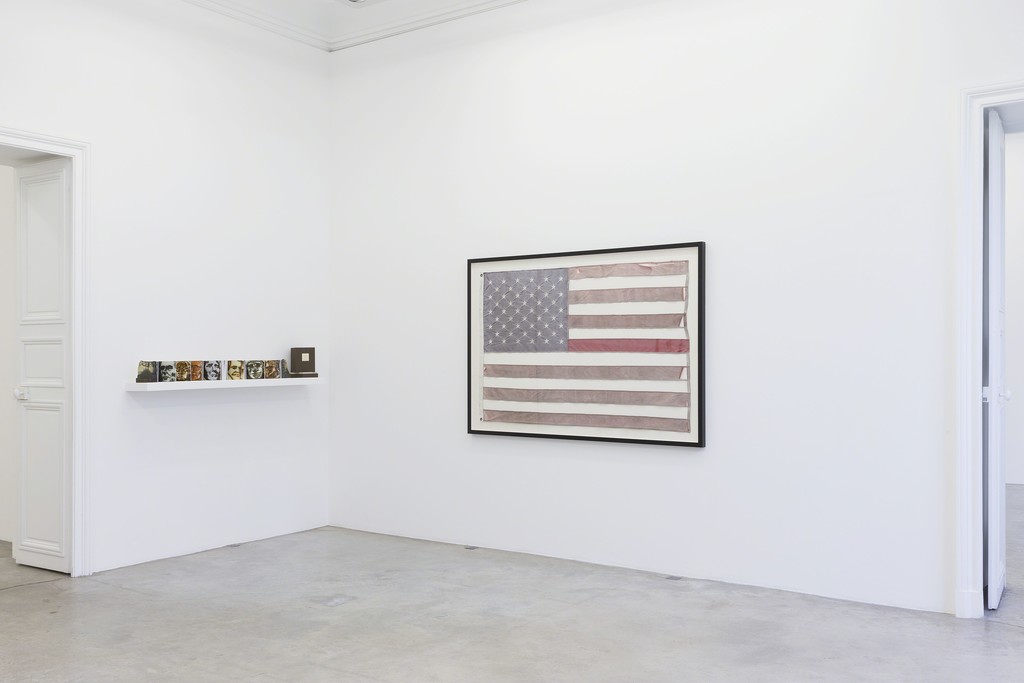 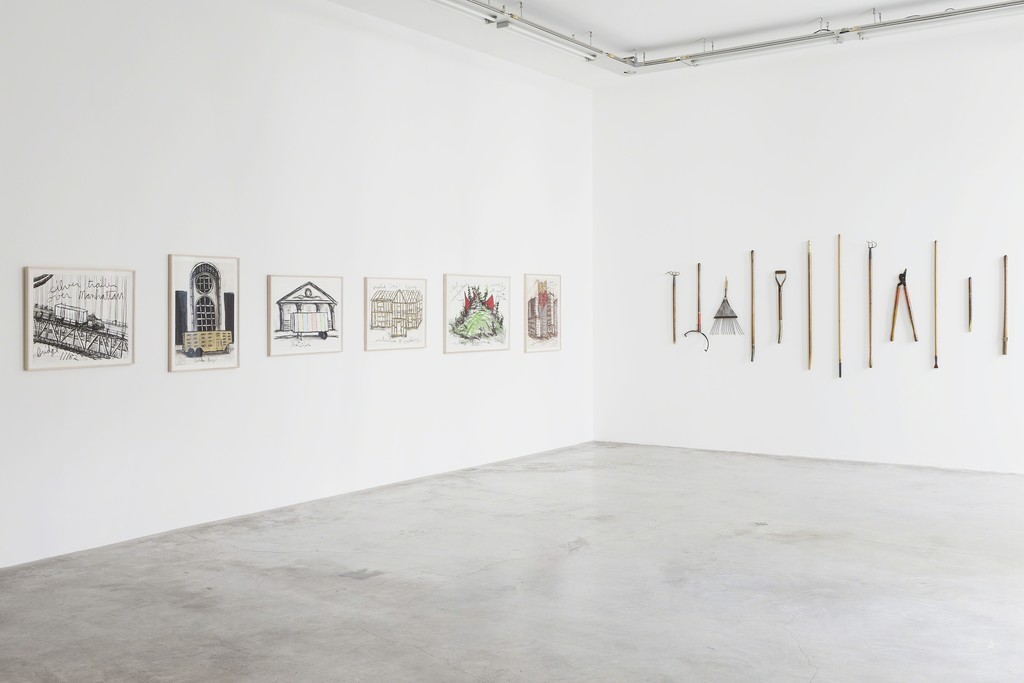 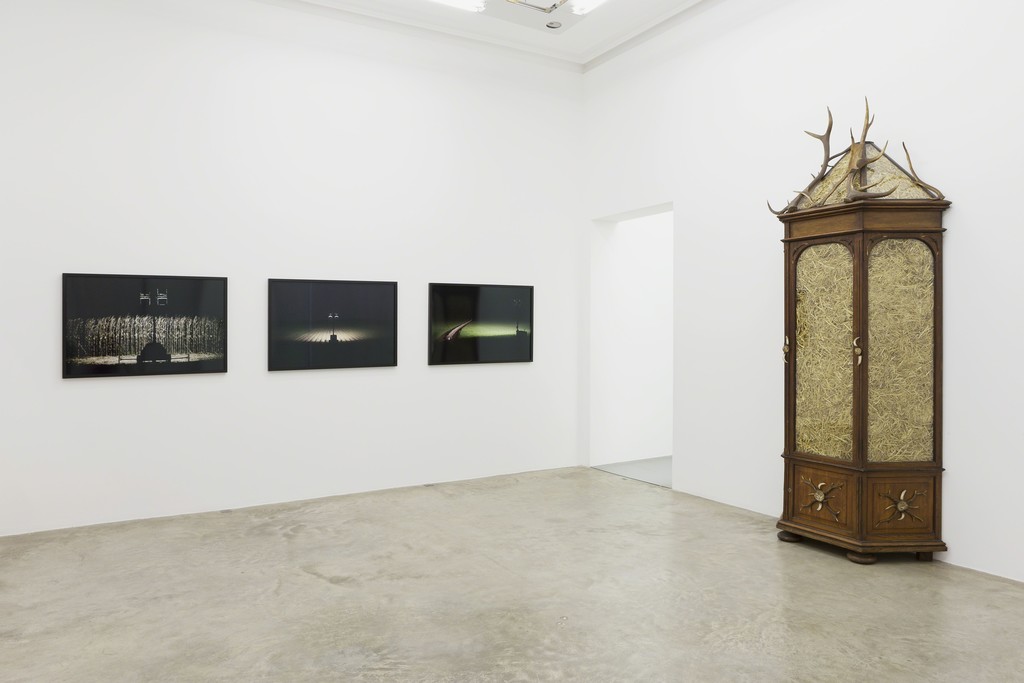 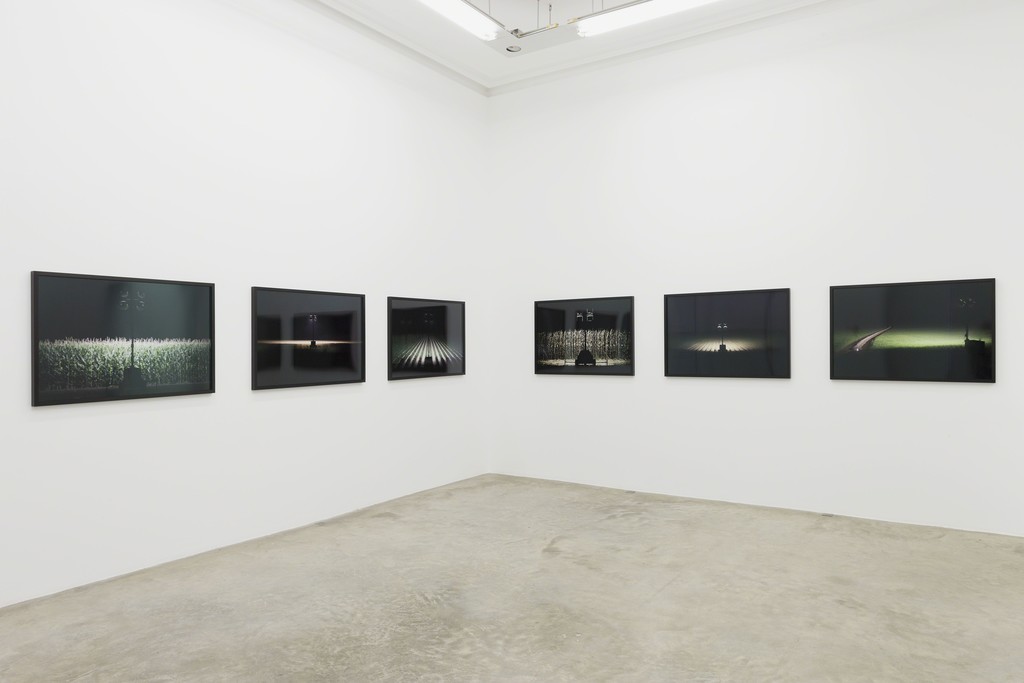 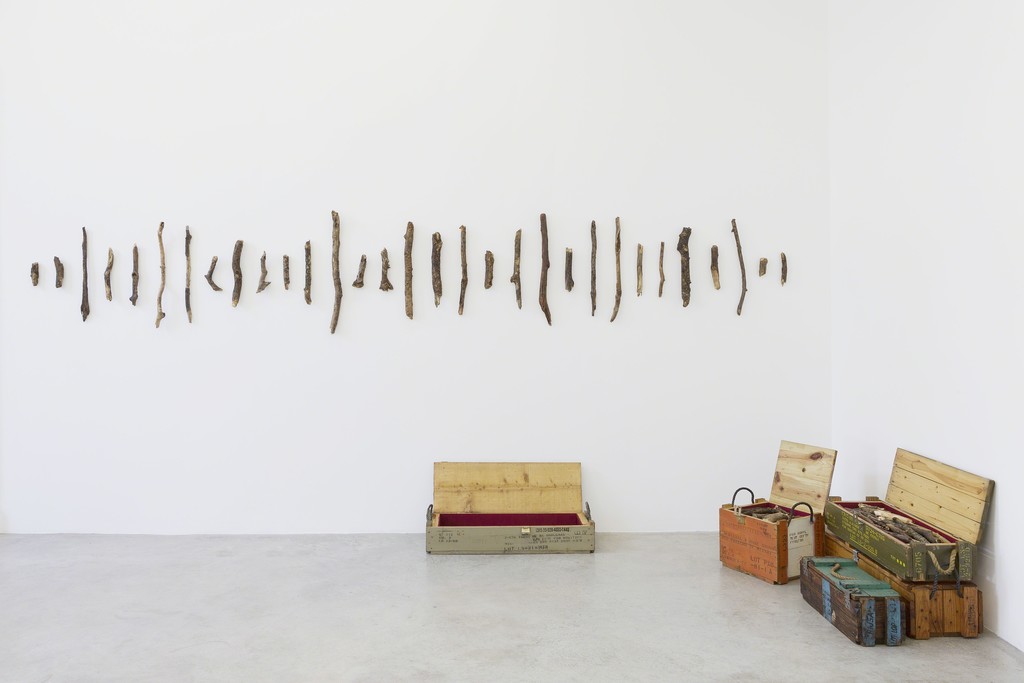 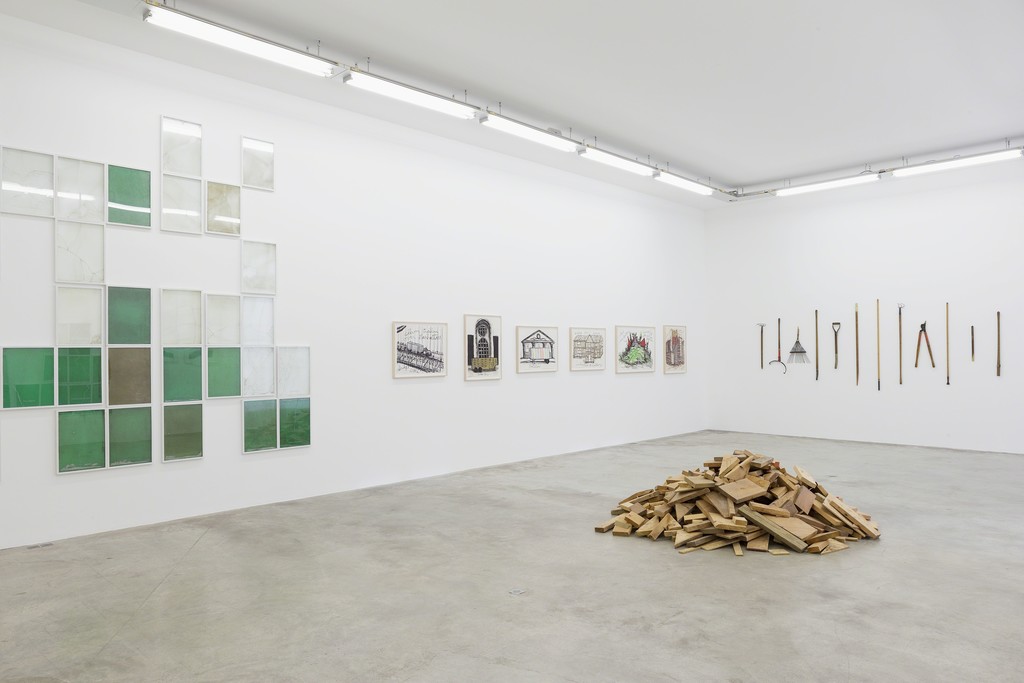 Galerie Perrotin, Paris is pleased to present “Sticks and Stones May Break My Bones,” the first solo exhibition of Mel Ziegler in France, pre- senting a selection of new and recent works by the American artist. The show will also include works from his influential collaboration with Kate Ericson, beginning in the late 70s and continuing until Ericson’s premature death in 1995.

Synthesizing conceptual, Land art, and interventionist strategies, Ericson and Ziegler developed a distinctly American community-based art outside the orbit of New York. Working directly with local iconography, sites, and communities across America, the pair staged interventions with and for these communities, and produced works, largely sculptural, from these interventions. Throughout their collaboration, the couples’ work was exhibited by numerous galleries and museums, and was the subject of the traveling retrospective "America Starts Here" in 2005 (organized by Bill Arning and Ian Berry), as well as a comprehensive exhibition at Galerie Perrotin New York in 2014. In 1992, Emmanuel Perrotin dedicated a solo show to the artists in his rst gallery, from which two pieces, “Vinegar of the 48 Weeds” and “Rock Jar” (1992), are presently on view.

Following the passing of Kate Ericson, Mel Ziegler has continued an artistic practice founded on the central concerns and strategies he and his partner established in their collaboration, but which has, over time, loosened formally and methodologically, allowing for a new degree of humor, serendipity, and a certain craftiness to enter his work. In the rst room of the gallery, both the roots of his practice with Ericson as well as a more relaxed sensibility are evident with “Rock Hard Individualism” (2010). At rst glance the work appears as a map of the United States composed of a variety of found stones. A second look reveals that each stone might be seen as a face. Ziegler, who has a thing for collecting these rock faces as he nds them, offers up a little bit of playful irony in his maturity: individually, each stone might not read as face to anyone except Ziegler, but organized together, we can no longer help but see each rock as having a countenance of its own.

On a nearby wall is an arrangement of some two-dozen brightly colored toy guns handmade by the children of the artist. Production was undertaken out of necessity—the artist was unwilling to purchase toy guns for his children on moral grounds—and so, fashioning the toys out of cardboard, duct tape, foil and paper with reference images from the internet, Ziegler’s children made their own. Like “Rock Hard Individualism”, this untitled work plays both with and against much of Ericson & Ziegler's earlier iconic participatory work, wryly replacing the distinct local communities who engaged in projects like "Give and Take" (1986), “Loaded Text”(1988), or “Camou aged History”(1991), with the community of his own nuclear family.

The family and its relationship to community, nation and politics—though again with an injection of levity—is a theme which carries through into “Carry a Big Stick” (2015), a title which makes partial reference to President Teddy Roosevelt’s foreign policy of “Speak Softly and Carry a Big Stick.” Antique ammunition boxes, each lined with red velvet, have been lled with “fetch sticks.” “Fetch sticks,” as Ziegler calls them, are the sticks which he has collected and used over the last ve years to play fetch with his dog. This American pit-bull named Sister, with whom Ziegler sometimes plays in front of the Capitol Building in Washington, is a sweet, affectionate animal, and no more inherently vicious than the sticks in the disarmed, luxuriously-lined ammo boxes on display in the present exhibition.

The exhibition also features two new iterations of “Stuffed” (2003), a site- speci c project installed throughout Vienna for Ziegler’s solo show at the Wiener Secession. “Stuffed” arose in part out of the observation that museum showcases, especially in a city like Vienna, form an integral part of the grammar of presentation for not just the Arts, but also for the display of salable luxury goods in the city’s famous shopping district. Taking about fty museum vitrines, Ziegler relocated them around the city and stuffed them full of plain straw, drawing a viewer away from the object behind the glass, and redirecting him to attend the case itself and its role in creating an “aura of display.” A viewer is further encouraged, by this inversion of display and what is displayed, to consider the relationship between luxury goods and art objects, public presentation and private consumption, as well as the social, commercial, and institutional frames and behaviors that contribute to establishing these distinctions.

Lastly, the exhibition will present a series of photos titled, "An American Conversation" (2013). Following a historic drought in the rural Midwest of the United States in 2012, Ziegler travelled around the region, bringing a mobile lighting rig along with him to capture the changing, often starkly beautiful elds at night. Shooting in the dark with arti cial light illuminates a focal point for our attention, centering the rhythm of the rows of cotton or stalks of corn, in what would normally be an overwhelming, undifferentiated view of a vast agricultural landscape.

Mel Ziegler was born in 1956 in Pennsylvania, he resides in Nashville, Tennessee. His signi cant collaboration with Kate Ericson (from 1978 to 1995) was the subject of over a hundred exhibitions, group and solo shows as well as museum retrospectives. Several solo exhibitions were dedicated to his recent practice since Ericson death, including at the Secession, Vienna (2003), at The National Museum of Art, Osaka (2001) and at Paula Cooper Gallery, New York (2000). In 2015, The Utah Museum of Contemporary Art will dedicate a extensive show to Mel Ziegler, as well as a selection of works from the duo's earlier collaboration.

His personal and collaborative work can be found in the permanent collections of the Whitney Museum Of American Art, New York ; the San Francisco MOMA ; the MOCA Los Angeles ; the MOCA San Diego ; the Albright-Knox Art Gallery, Buffalo ; the Bronx Museum, New York ; the Des Moines Art Center, Iowa ; and The National Museum of Art, Osaka, among others.