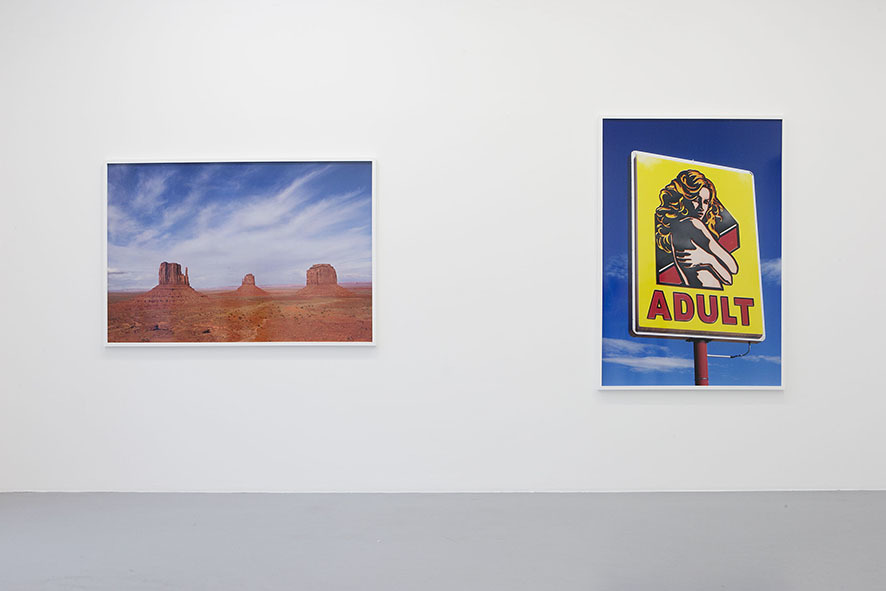 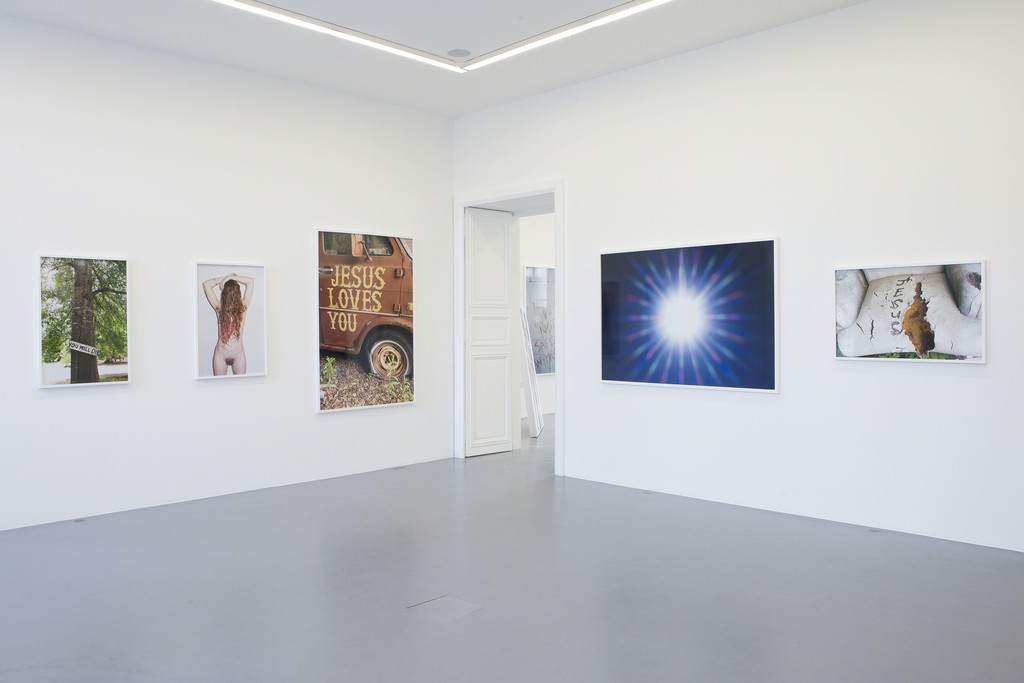 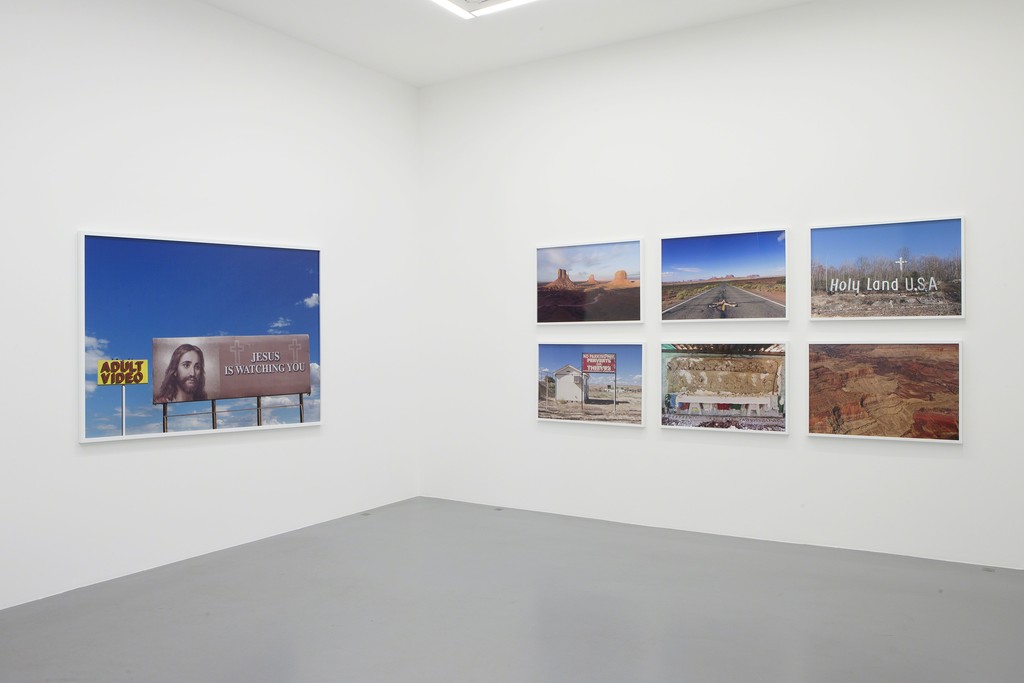 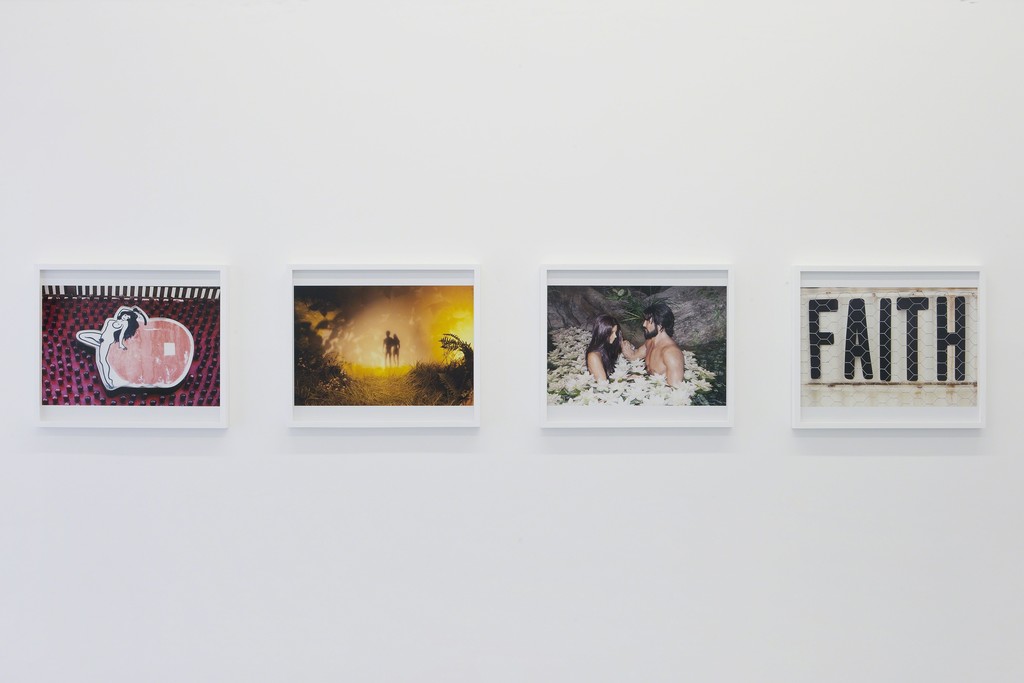 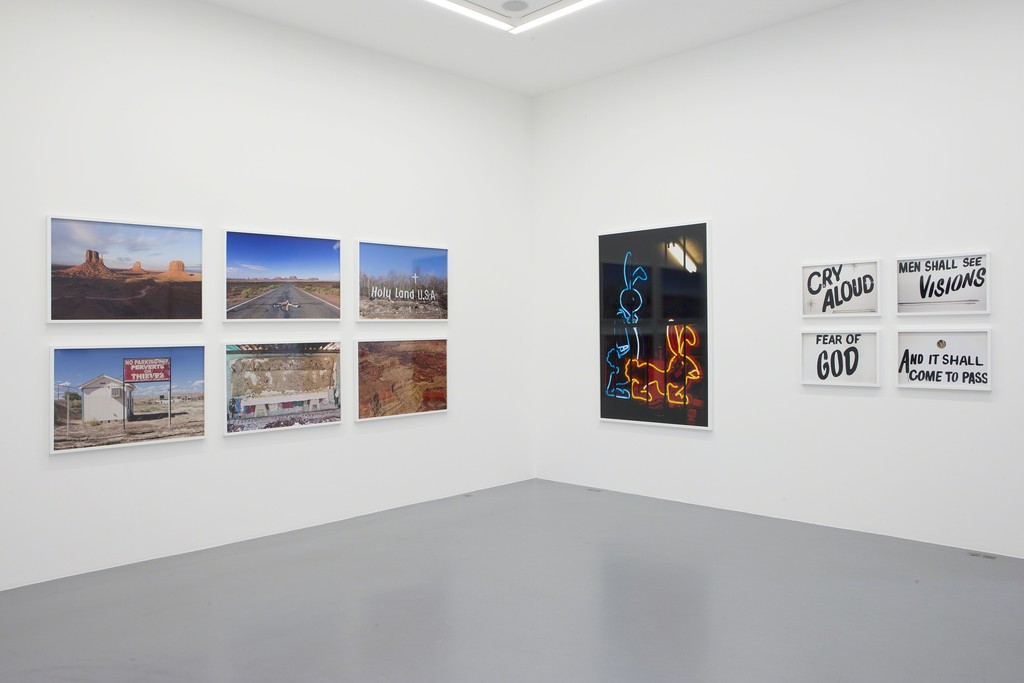 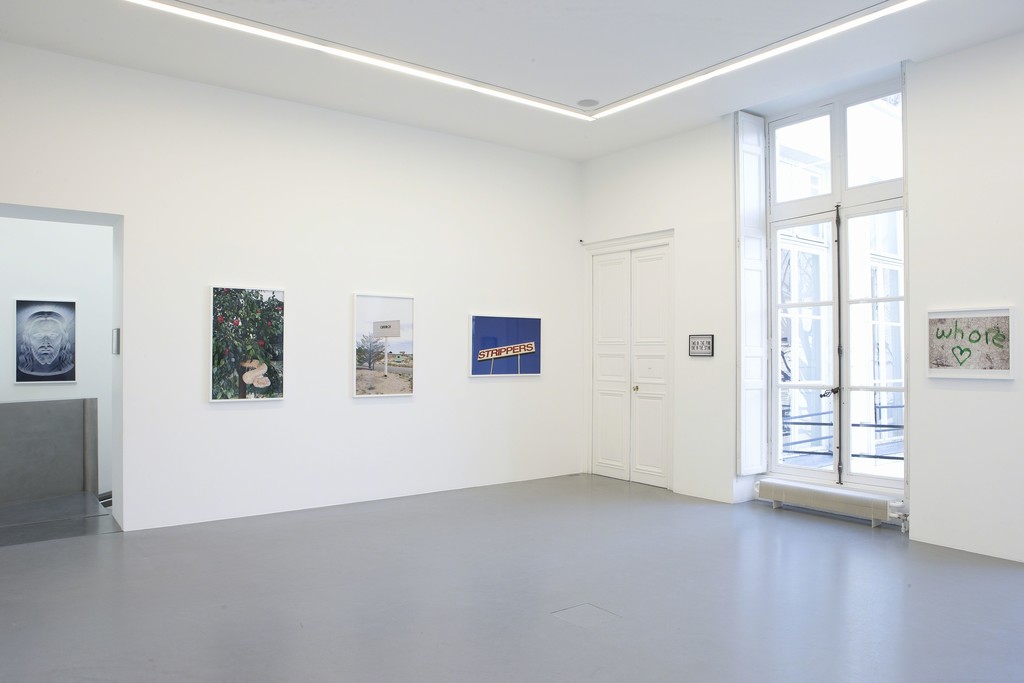 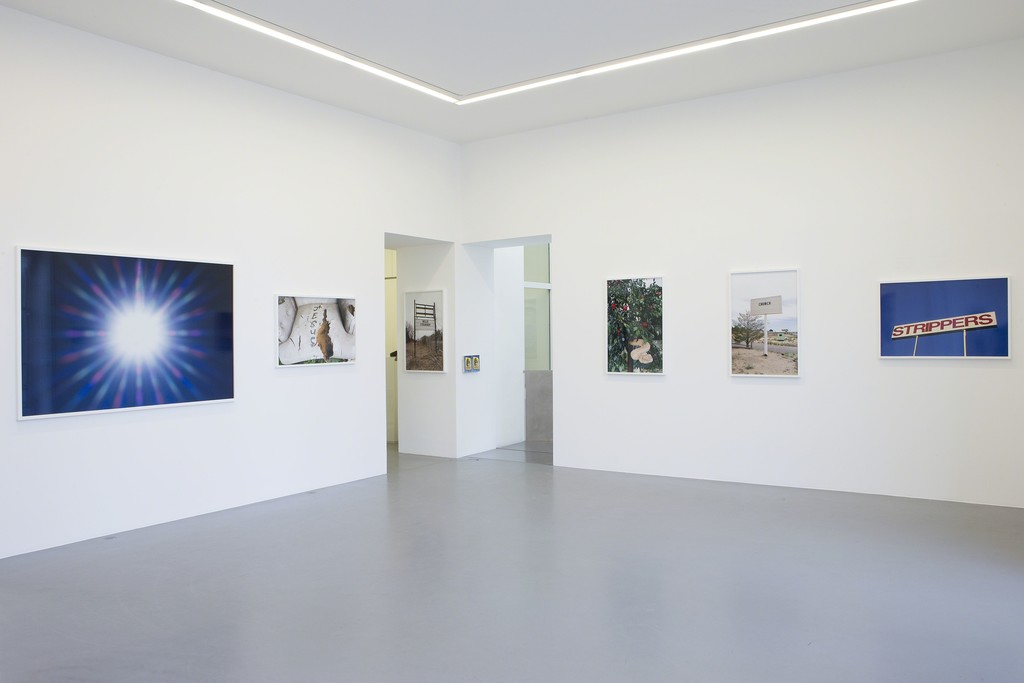 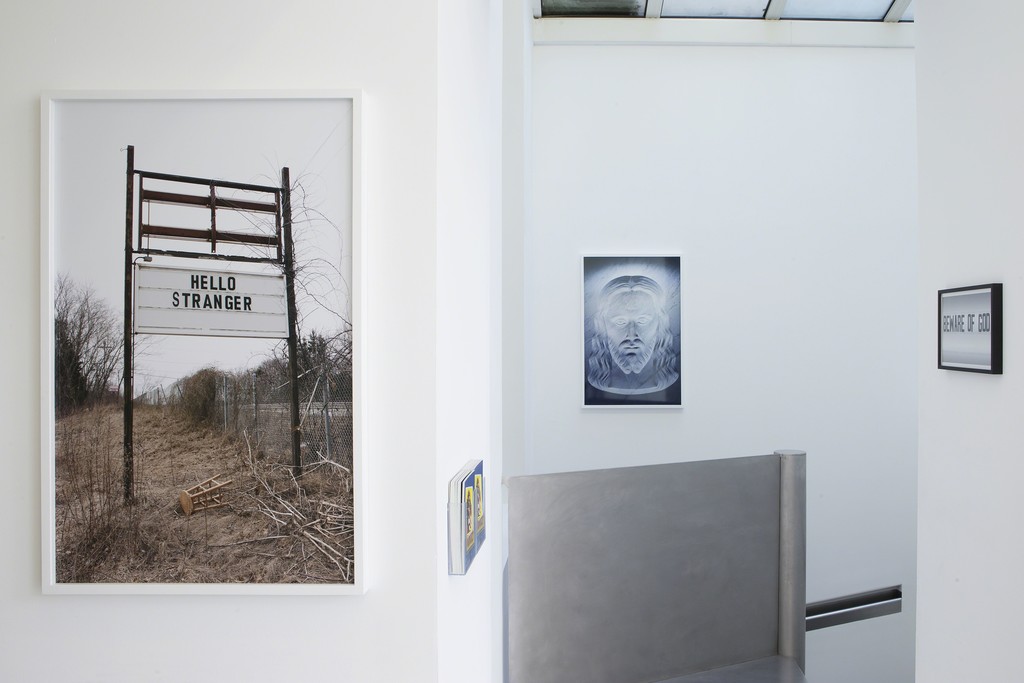 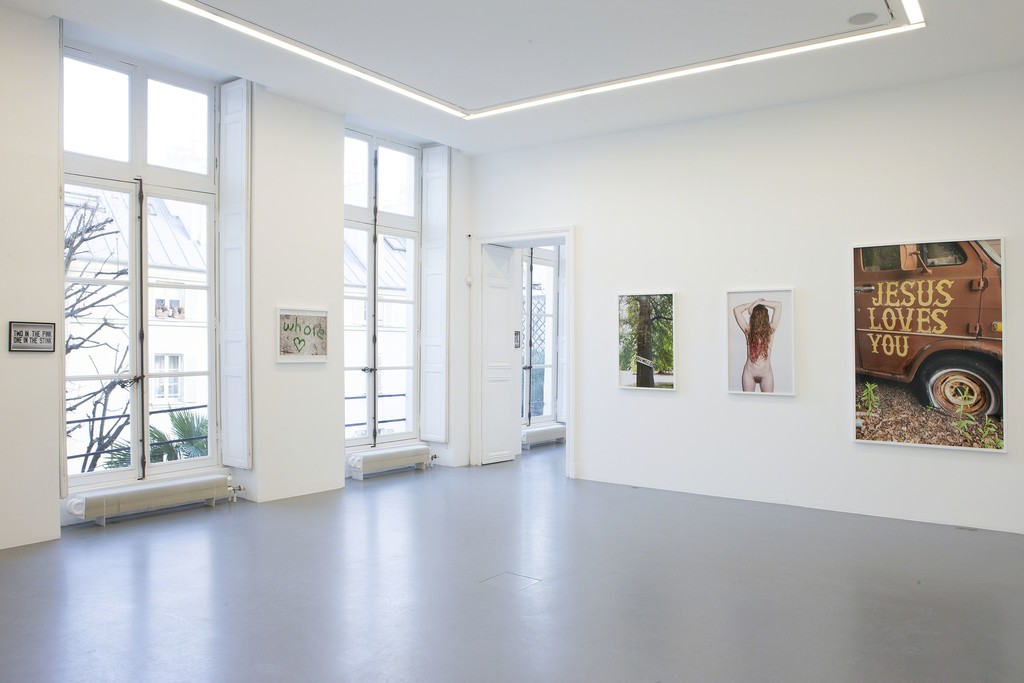 Galerie Perrotin, Paris is pleased to present the rst solo exhibition of Terry Richardson at the gallery since 1999. "The Sacred and The Profane" presents a series of new photographs taken in the Western states of America over the past two years. This project was initially meant as a form of documentation of American summer rituals, including fairs, festivals and parades. Throughout his travels, Richardson soon became aware of a pervasive tension that simmered throughout the country between a mystical and religious omnipresence and the sex industry, becoming the focus of the series.

"On the one hand, violence, loneliness, and especially sex seemed to be everywhere, but never far away was the promise of salvation, the love of Jesus, and the fear of turning your back on God. I soon became much more interested in the complicated relationship between desires and fears, beauty and vulgarity, the beauty of nature and also its ugliness, the hope that religion can offer and also the shame.

Ever since John Winthrop led a group of Puritan separatists away from the Church of England and into the New World, America’s relationship with purity and transgression has been fraught with anxiety. The Puritans believed that the sin of an individual was symptomatic of a blight within the entire society- they preached about living in a ‘city upon a hill’- one which would be a model of Christian charity and righteousness, but whose sins would be seen by the world and by God. Winthrop borrowed the phrase from Jesus’ Sermon on the Mount, in which Jesus cautioned his followers that “a city that is set on a hill cannot be hidden.” Transgressions in the early colonies were public affairs, with the guilty parties paraded in front of the town for all to see. Shame was a public experience- think of the ctional Hester Prynne, the famous adulteress, condemned to a life as a marked woman. Her sins, like those of so many others, are shoved in nose of society as both a warning and a teaching tool- church sermons and crime blotters alike laid out these transgressions to dramatic effect, titillating their audiences with glimpses of sin as a tool to enforce the social and religious order.

Hundreds of years later, American society maintains many of the deep-rooted vestiges of our Puritan ancestors. From the hysterical fear of sexuality that led to the Salem Witch Trials, to Prohibition, to Blue Laws, to the Westboro Baptist Church, America, more than anywhere else, seems in many ways obsessed with sin. Even today, hardline religious groups use a similar strategy to their Puritan ancestors of exploiting impropriety to assert and fortify their own doctrines, for example, placing billboards near the sites of transgression- you can buy your pornography or pay for your lap dance, but not without the admonishment of a larger than life, silent Jesus watching over you.

Sin and sanctity have always depended upon one another for survival. It is easier to think that there are two sides- that things are either good or they are bad, that people are either saints or sinners. It is often said that one can see God by looking at the beauty of nature, and when standing in front of the humbling abyss of the Grand Canyon or watching the theatrics of a pink and indigo sunset, it can seem easy to attribute to His hand, to give Him credit for the majestic lion or the noble horse. But do we still see God when the lion has his bloody snout in the carcass of his weaker prey? A zebra might take issue with the idea that the meek shall inherit the earth.

Although this body of work was not something I had set out to explore, I found the repetition of these themes impossible to ignore. Everywhere that I went, zealots were reminding me that Jesus is watching, that those who don’t attend church are destined for a ery eternity, and that the ten commandments are very real and very serious. At the same time, sex shops, strip clubs, and pornography are everywhere, guns are available easily in most places, and poverty, bigotry, ignorance, and hatred are pervasive in society, more-so in places that seem to be the most evangelical. Not only can sin and sanctity not exist without the other, but more often than not, there are elements of both in each. Very often we think of a spectrum of opposites as being linear- with the far left as far away as possible from the far right. But to truly understand these differences, we must reimagine the spectrum as being U-shaped, so that each drastic end has more in common with each other than it does with the center." - Terry Richardson