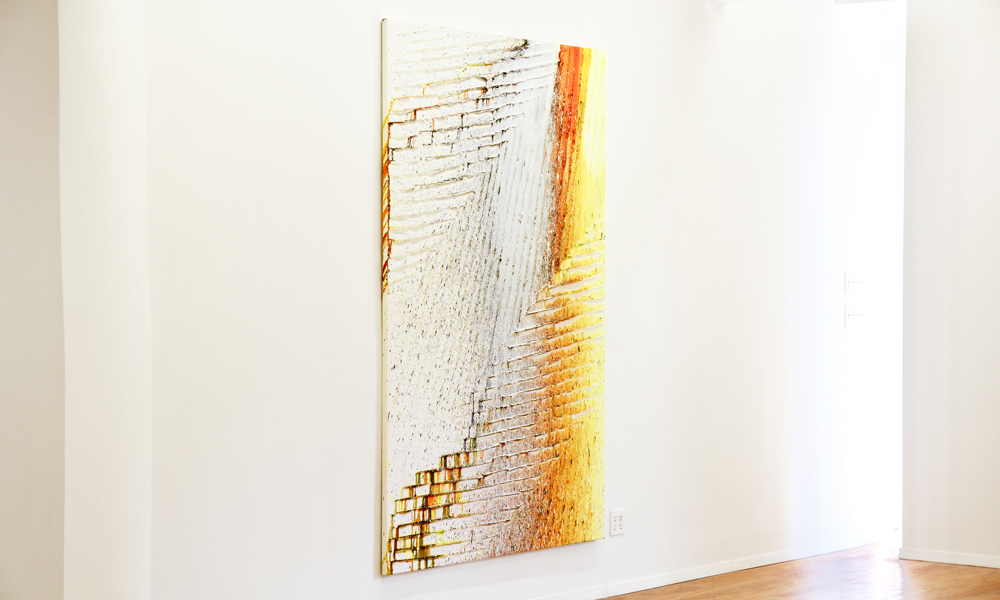 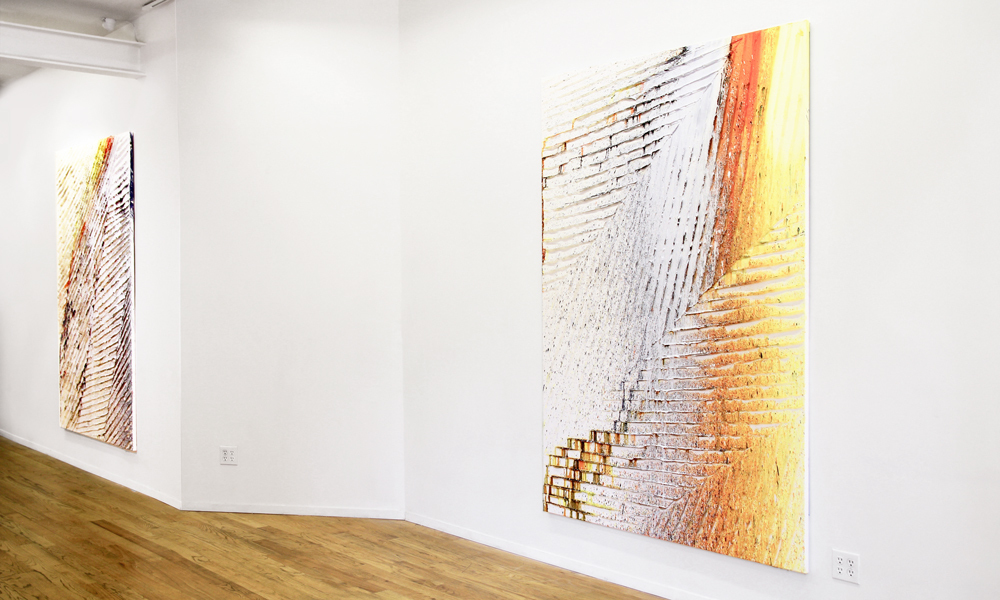 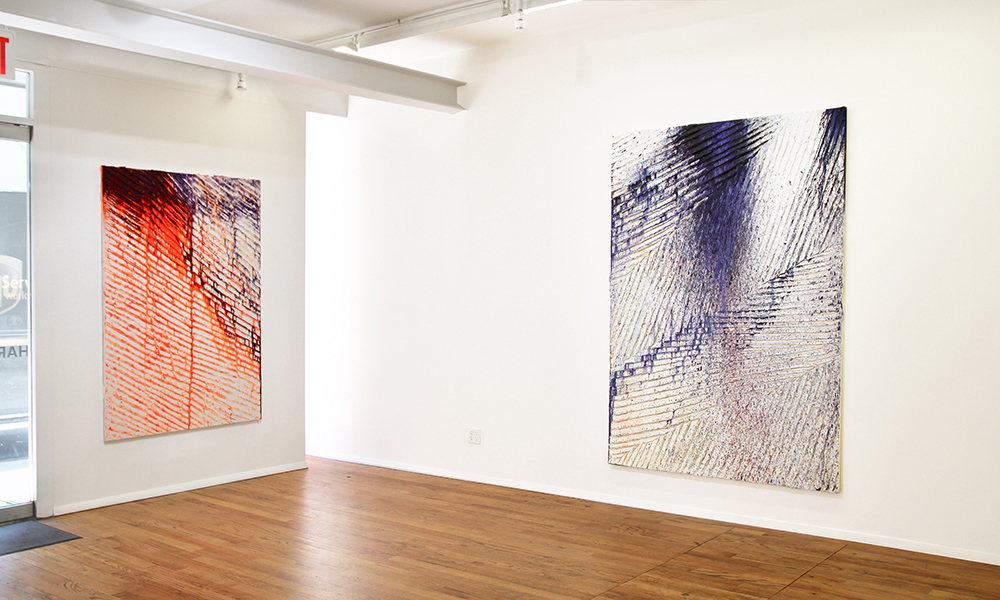 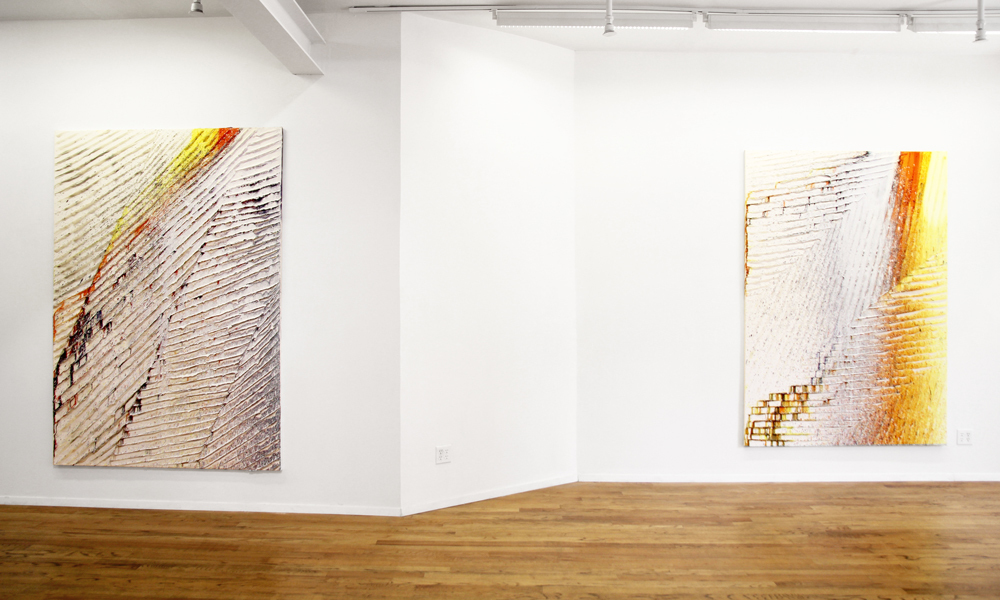 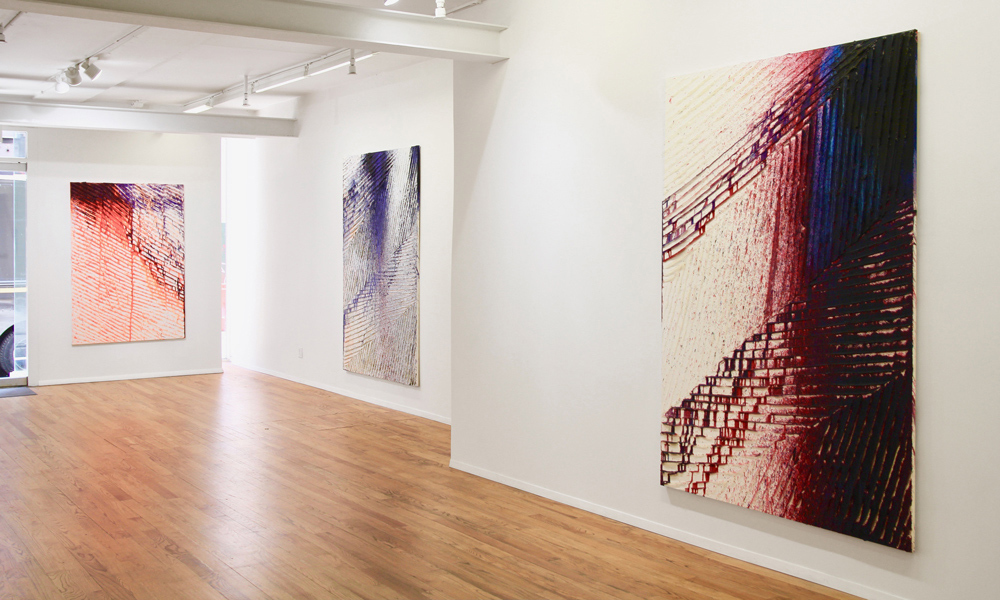 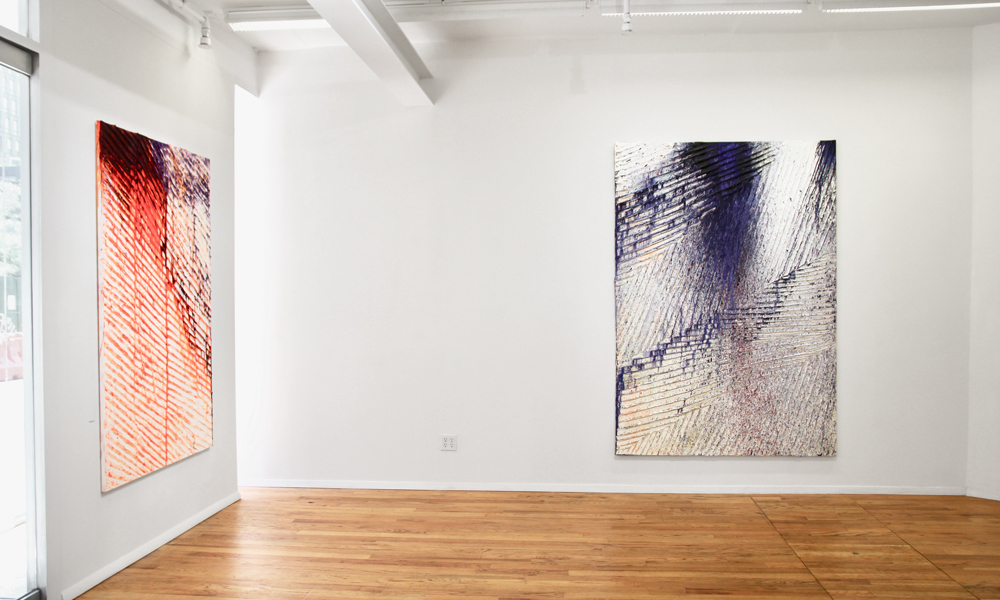 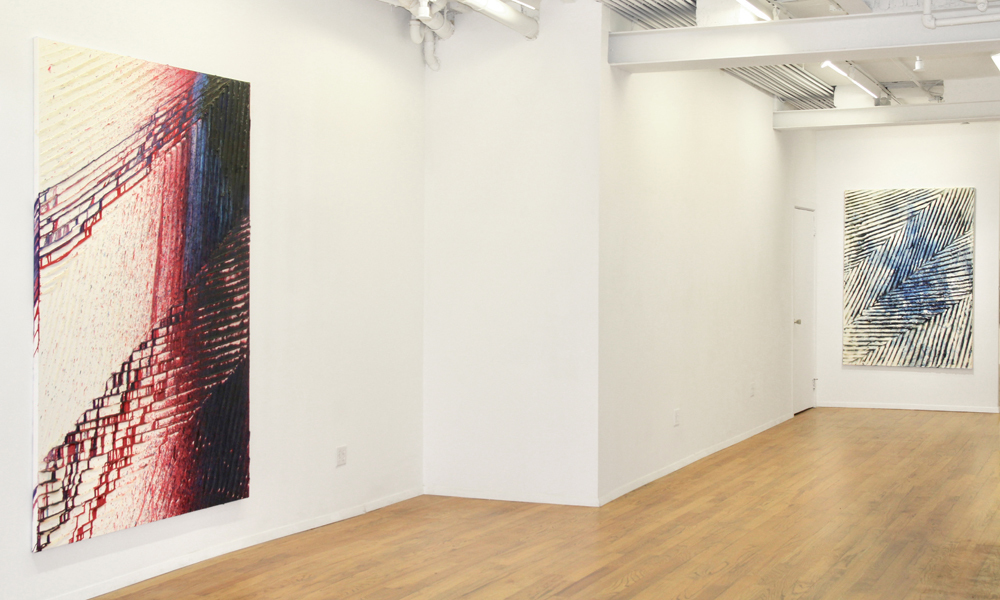 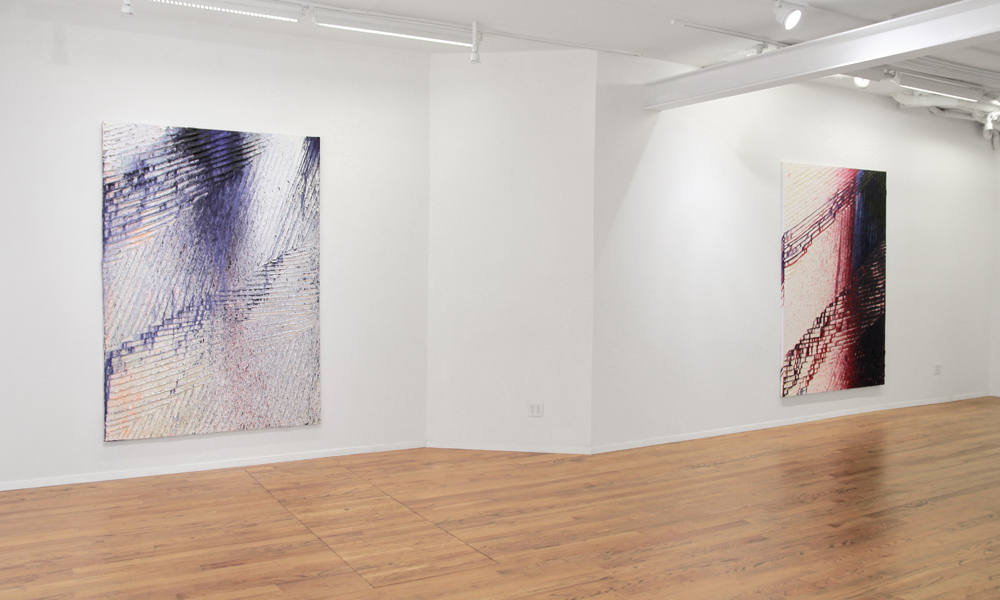 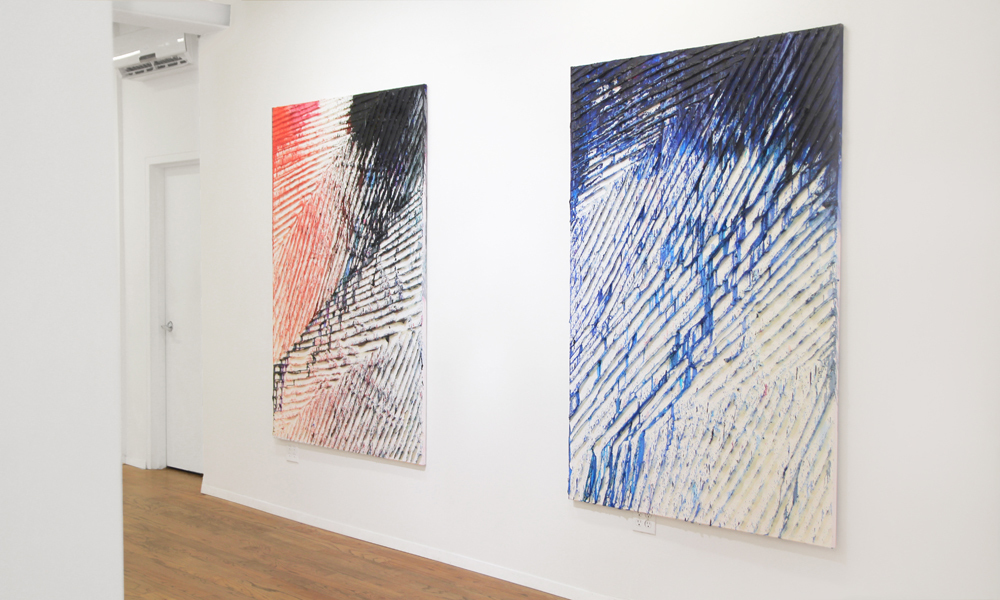 From May 23 until June 24, 2018, Galerie Richard presents a solo exhibition by Koen Delaere titled Ants on Shrimp. In each of his eight vertical paintings made in 2018, Koen Delaere has created three-dimensional geometrical lines, mostly diagonal lines, which catch drops of paint, creating a spontaneous disorder into ordered patterns and a colorful vigorous energy into peaceful white stripped canvases.

Delaere's paintings are the result of a physical and energetic interaction with the material: canvas, thick layers of paint, colors and textures. The artist first made the geometrical deep layer of translucent paint lines on the white canvas. Then he lays down diagonally the painting on the floor and against the wall. Finally, he pours paint on the top and the paint spontaneously falls down from one line to another following the diagonal lines. All artists know that opposed to horizontal and vertical lines, diagonal lines bring more dynamism, complexity, uncertainty. Piet Mondrian forbade the use of diagonal lines for artists. Effectively these new works by Koen confirm in a way Mondrian's comments on diagonal patterns. The flow of paint seems much more unpredictable, like a bowl in a Pachinko machine. Koen Delaere's procedure of work, combining a kind of grid and a spontaneous development, can be compared to Jeremy Thomas's process with sculptures, which transforms geometrical patterns into organic shapes.

For Delaere, painting is not only meant to arrive at aesthetic perfection, but also to involve the viewer into the layered and dynamic work process that was necessary to come to a finalized painting. The pattern of the layers of thick paint and the gestural way in which it is applied are the subject matter of Delaere's compelling paintings. The performative character of Delaere's works can be compared to actively listening to a live music performance.

Dutch collector Eric van't Hoff inserts Koen Delaere's paintings in the history of American Art: "To me, Koen is a contemporary version of influential painters like Brice Marden, Frank Stella, Robert Mangold, Agnes Martin, or Robert Ryman. Painters who are driven by the aim to show the basic principles of light, form and color. Koen is doing so by showing us the interaction between colors by painting them on wave-formed ripples. The work itself is less sober and softer than most works in our collection, but I decided to add it anyway because I wanted to try something totally different to awaken to other works and bring out their stories in new ways" (1).

Koen Delaere was born in Bruges, Belgium in 1970 and currently lives and works in Tilburg, the Netherlands. He graduated at the Academy for Visual Education where he studied art and philosophy. He was a De Pont Foundation grant awardee. Recent exhibitions have been with Mike Weiss Gallery, New York, Rod Barton Gallery, in Brussels. Gerhard Hofland Gallery regularly exhibits the artist in his gallery and in art fairs. His works are included in the permanent collections of Centraal Museum Utrecht, SMBK De Vleeshal Middelburg, Dordrechts Museum, CCA Andratx, Mallorca, Bouwfonds Investment Management Netherlands.