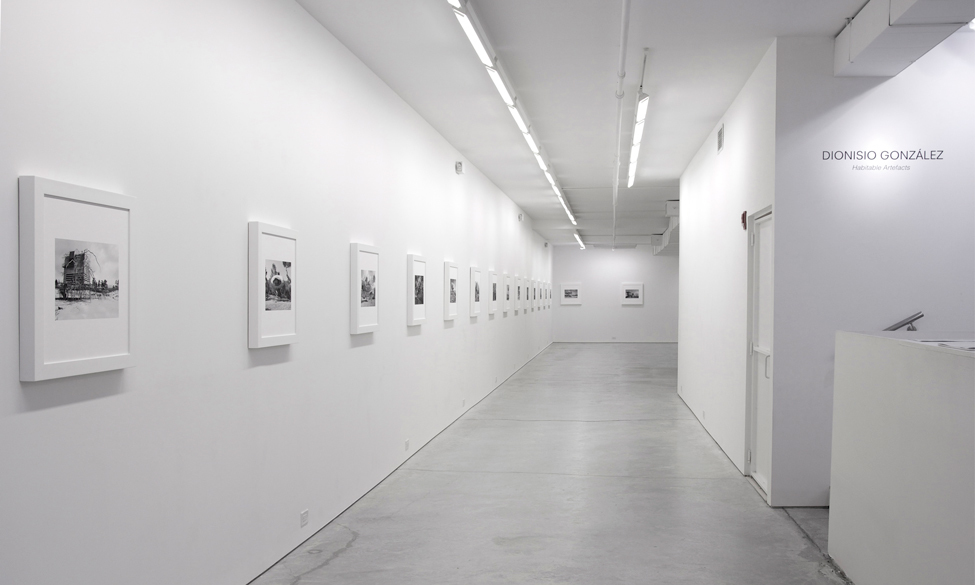 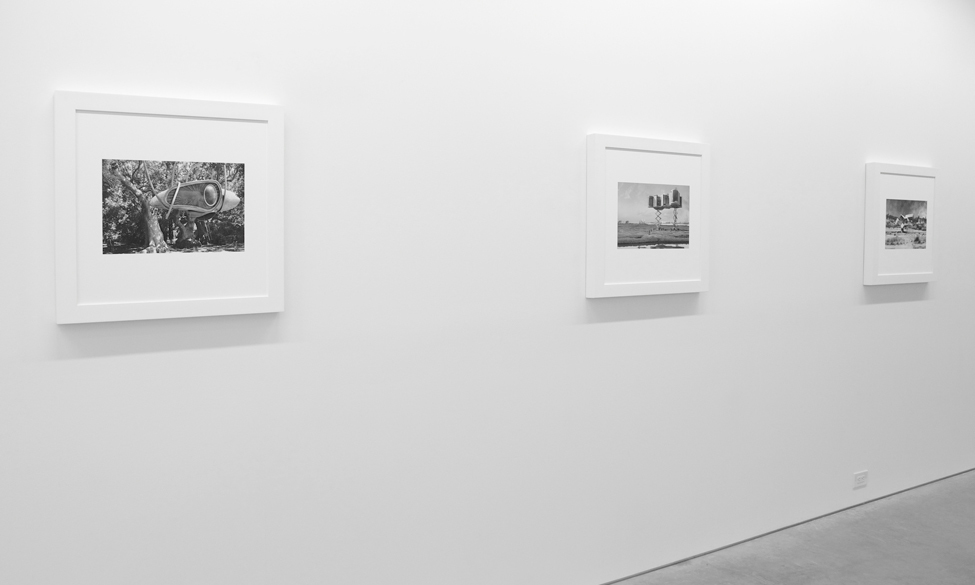 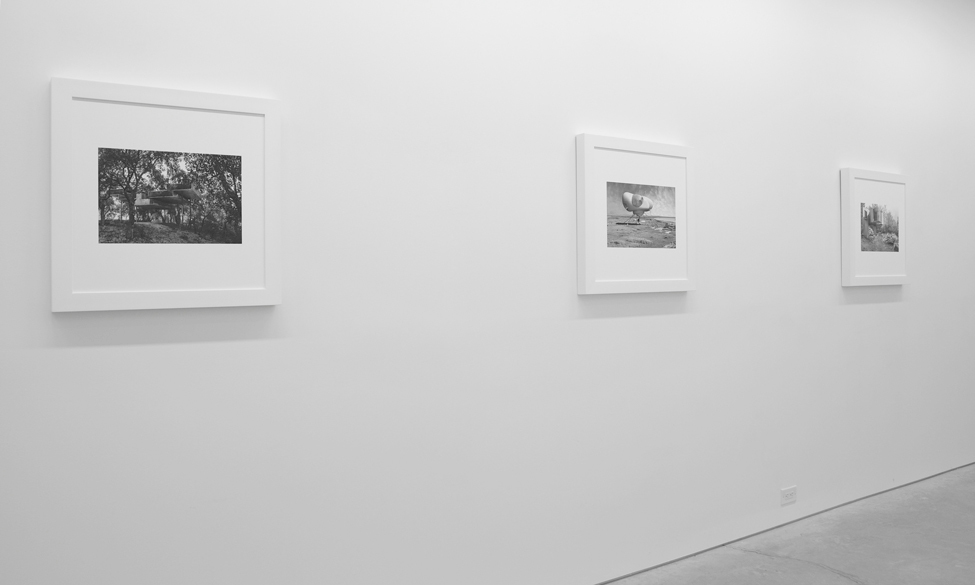 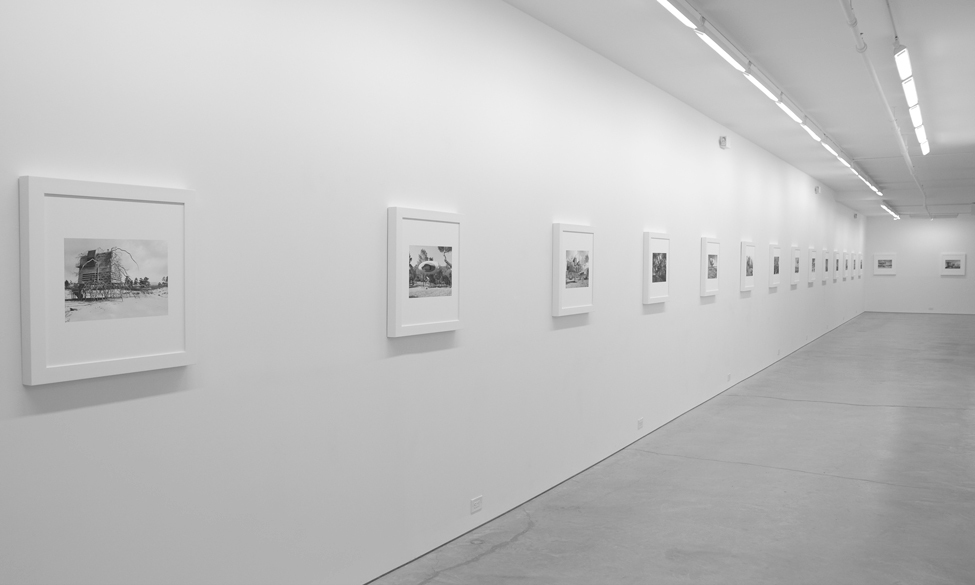 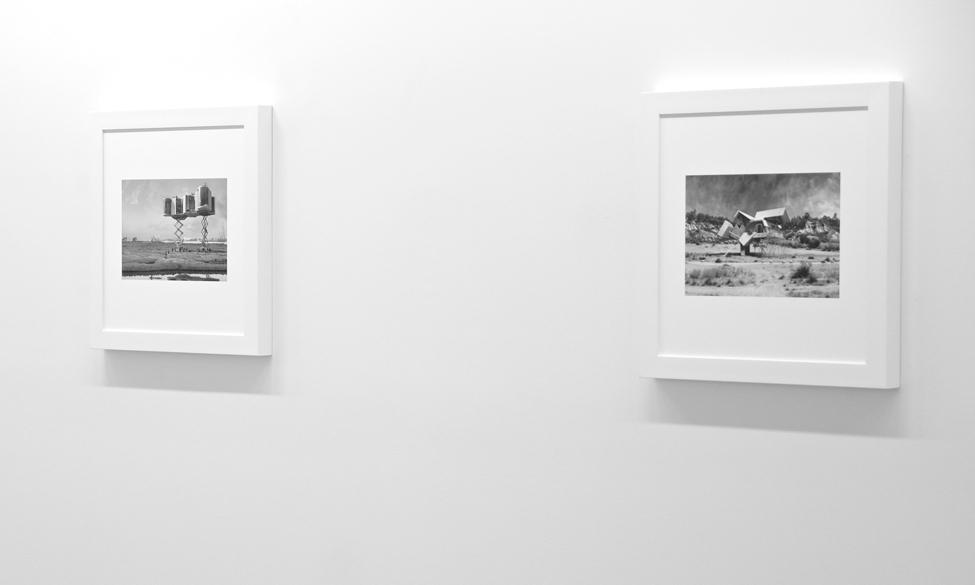 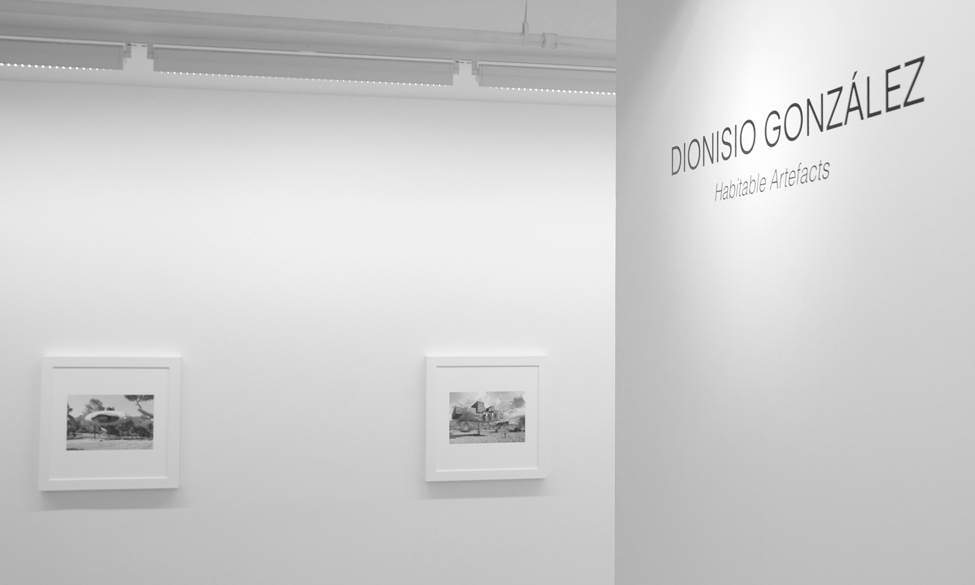 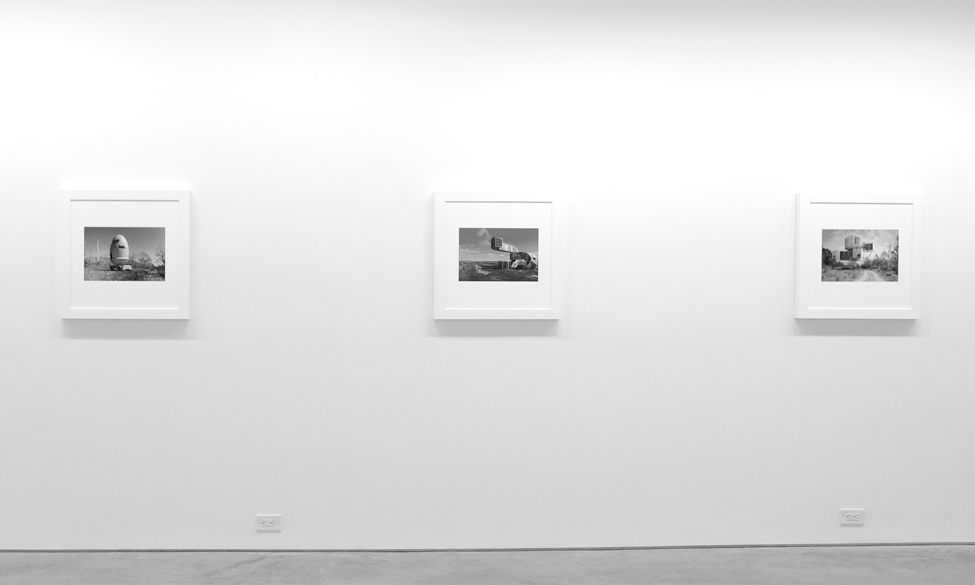 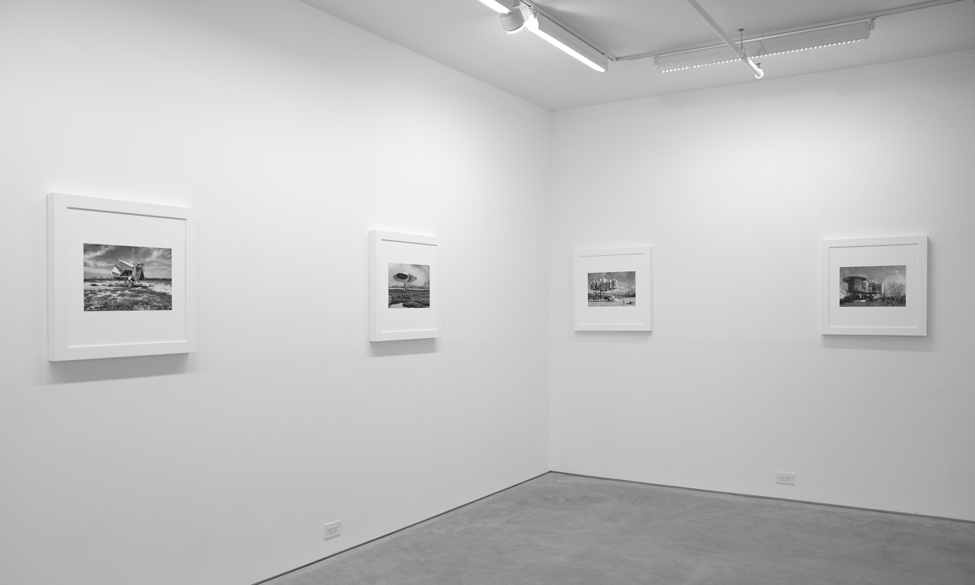 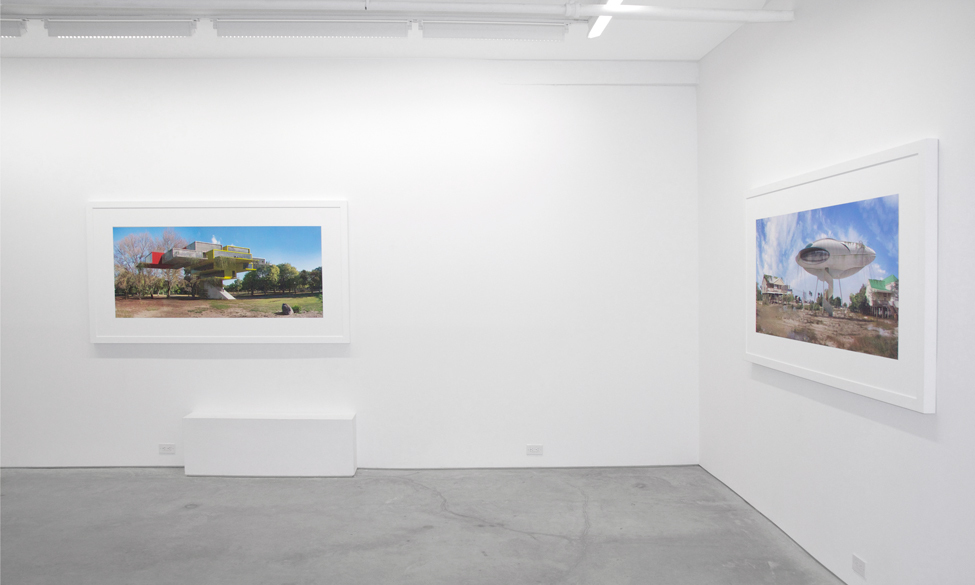 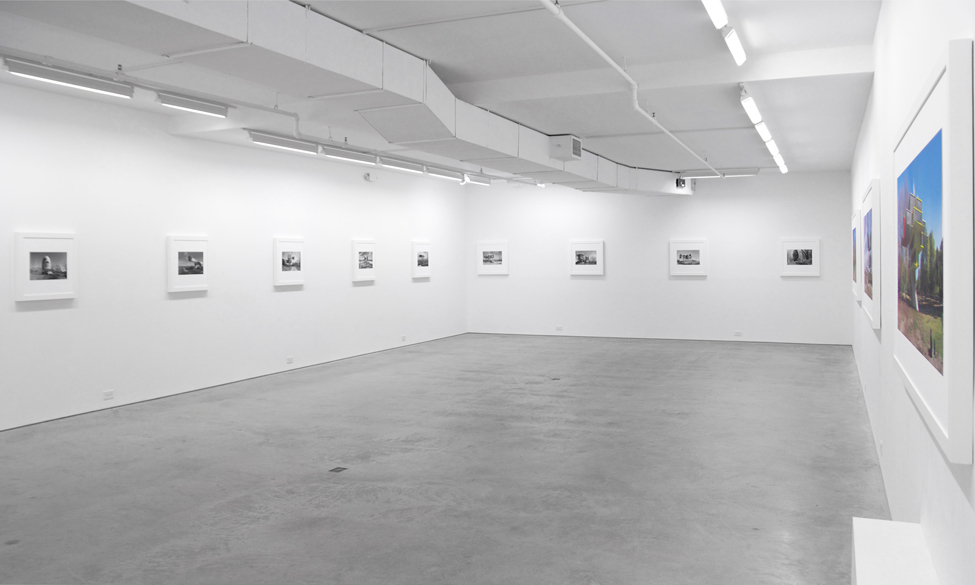 Galerie Richard, New York, is pleased to present the third solo exhibition by Dionisio González from October 23 to December 20, 2014. Fo­­r the first time, the artist’s most recent works, composed from his two series Inter-Acciones and Trans-Acciones, are displayed in the new show entitled Habitable Artefacts. Contrary to the previous works exhibited in the gallery that related to urban issues, this new series relates more to the relationship between nature, time, and architecture. Each piece of art represents a single building in a landscape in either Spain or Alabama. Both Inter-Acciones and Trans-Acciones share the same concept of an old futuristic building in nature. The Trans-Acciones photographs are much more like González’s signature works of being large panoramic views in color. But in contrast, the pieces from the Inter-Acciones series are much smaller and in black and white. This different presentation paves the way to a new sense of intimacy in the work, although we can recognize some similarities between the constructions of the two series. In Habitable Artefacts, Dionisio González continues to place his virtual architectures in an in-between space between fantasy and reality, where they succeed to be considered as plausible. At the same time, by mixing the past, present and future, he condenses our sense of time in a confusing way, which might be a way to express the speediness of change nowadays.

“In 2001 Dionisio González produced Inter-Acciones, a series of small photo-engravings where for the first time the black and white images proposed an impossible meeting, full of inconsistencies, between precarious architectures and Nature…The unfinished structures from over a decade ago have now become mysterious isolated houses in settings as heterogeneous as a field, a forest, a salt marsh, a beach, and even a reservoir. Each of these buildings has a personality of its own, and a strange relationship with its setting, silently expanding without any apparent human intervention. From the look of them, it would appear we are facing an uncertain future filled with abandoned homes, as if a silent catastrophe had occurred and all that remained was an imprint of what had been constructed…This set of architectures – are they habitable artefacts or ruinations? Or surprises the walker is met with in the face of abandonments which lead us to a state of deterioration and the imperfect? Given to decline or damage, due to the return of the forest that intervenes and wears them down with disuse and sabotage, they are interpolated, symbolic architectures. Because like any area removed from social control, they incite exploration and fantasy, transferring us to a vital past or an eccentric present...

Certainly the series of images and art-e-facts that make up Inter-actions are focused on the concept of architects like F. LL. Wright, classified as prairie houses at the time, because of the large number of summer residences he built in the woods or beside Lake Wisconsin and Lake Michigan and in the wooded suburbs to the north of Chicago… That immateriality, that transparency, this early gesture towards integrating the atmosphere into architecture (Marcel Breuer), towards recruiting nature as shared and therefore absorbent space, which impresses deeply and occupies all: is reflected in the series of inter-actions. Where weight is subordinate to a fastening of stilts (Le Corbusier) and the air flows freely into the building. There are some magnificent examples of this abstraction, this visibility, this desire to communicate rooms where matter has to be superimposed on impression in the modern architecture of the mid-20th century in California, such as Rudolph Schindler, Richard Neutra, the aforementioned John Lautner, Albert Frey, Craig Elwood, Pierre Koenig, Rafael Soriano, William F. Cody, Quincy Jones; with structures built in Palm Springs, Beverly Hills, Montecito, Palos Verdes, Los Angeles or Desert Hot Springs that lead us to reflect, in the words of Andreas Huyssen,“that this obsession with ruins hides a nostalgia for an early era of modernity, when the possibility of imagining other futures had yet to fade away...” (Dionisio González).

Dionisio González (Gijón, 1965) is senior lecturer at the Faculty of Fine Arts of the Universidad de Sevilla. His works are represented in prominent collections such as the Centre National d'Art et de Culture Georges-Pompidou in Paris, the ING Art Collection in Amsterdam, and the Margulies Collection in Miami. His work has been exhibited in multiple institutions and museums such as the Museum of Contemporary Photography in Chicago, the Museo Nacional Centro de Arte Reina Sofía de Madrid, the Museu de Arte de São Paulo or the Toronto Museum of Contemporary Canadian Art. The Inter-Acciones Series has been exhibited in the Comunidad de Madrid en 2013.