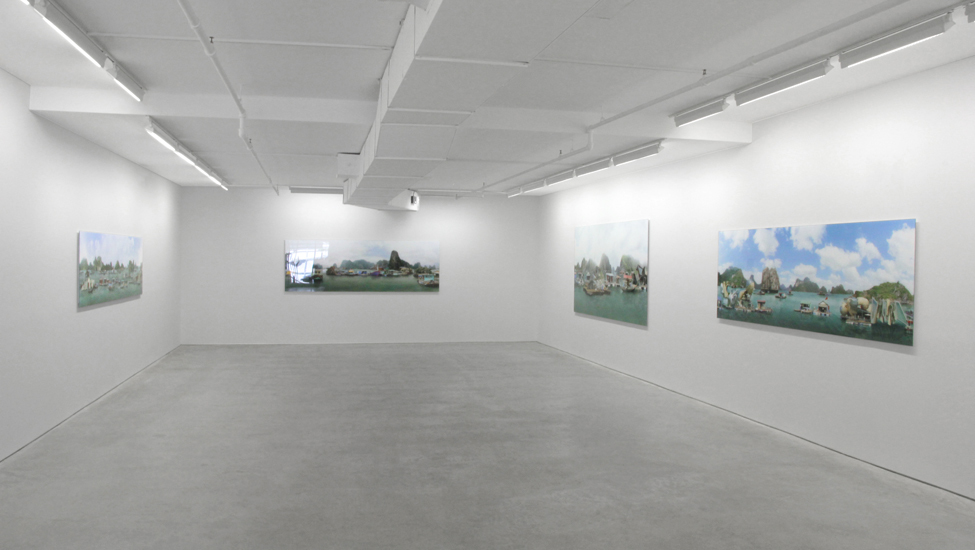 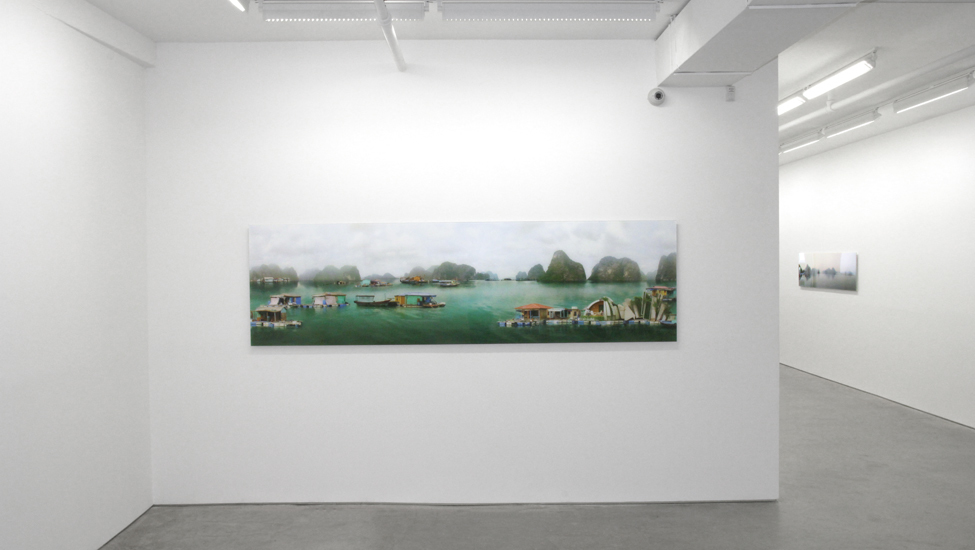 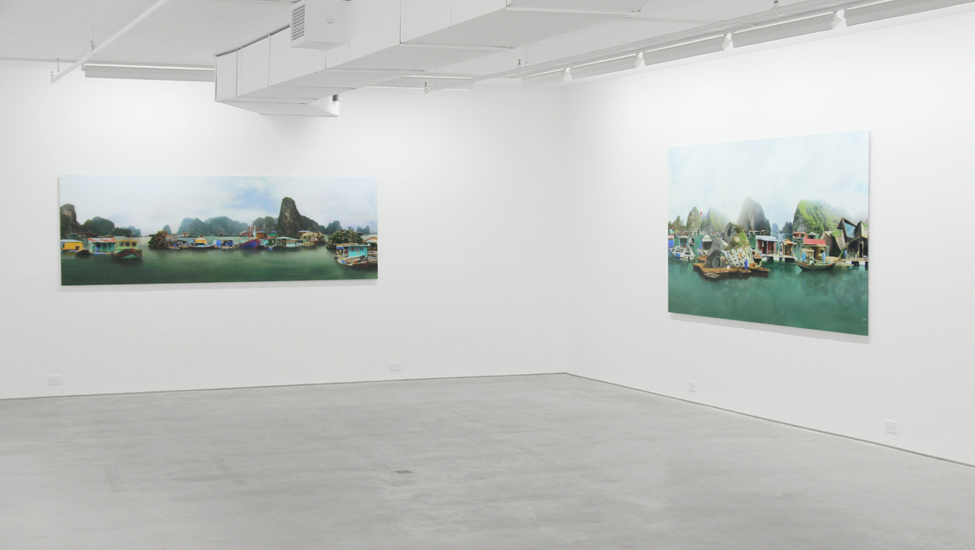 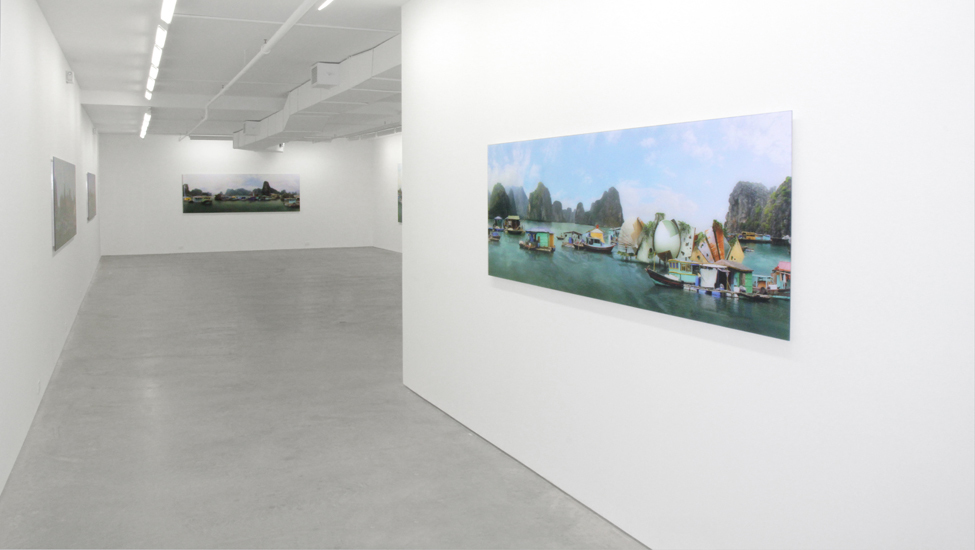 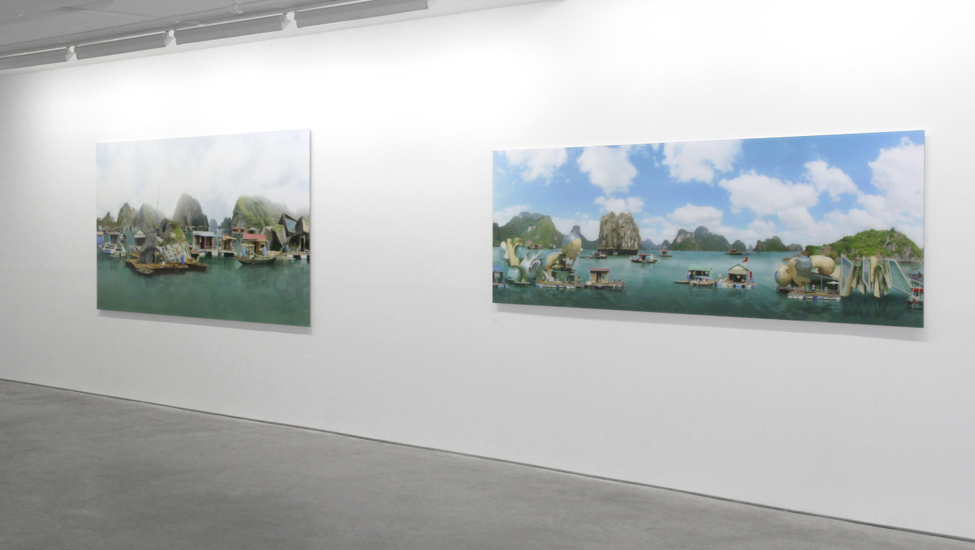 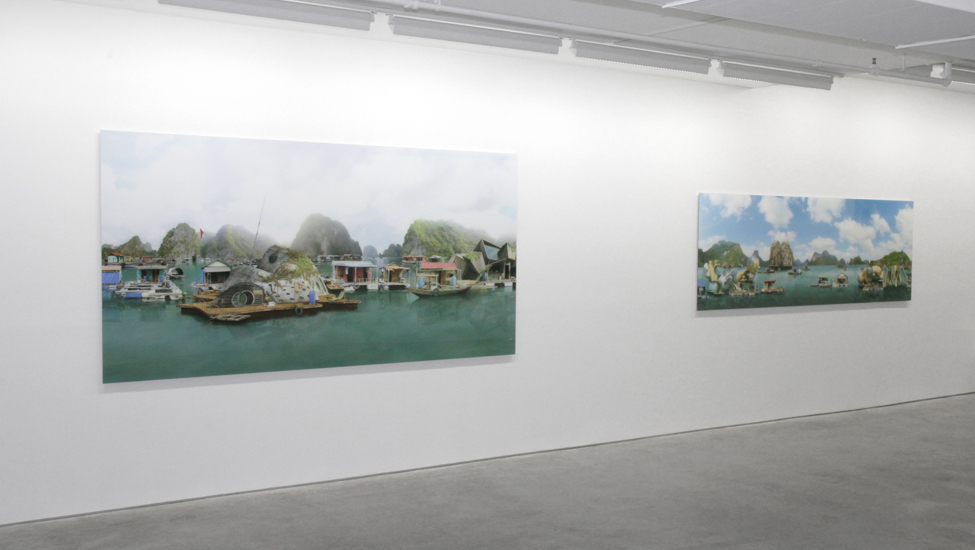 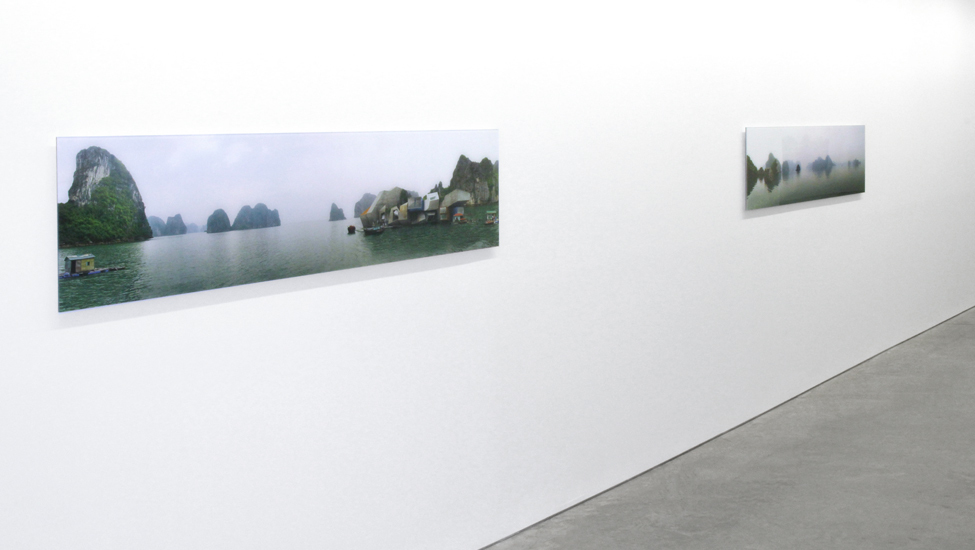 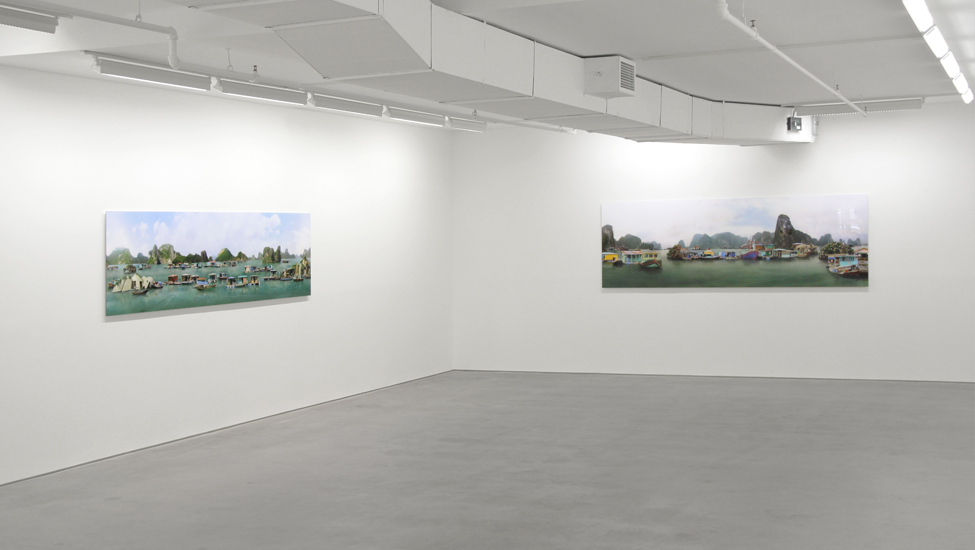 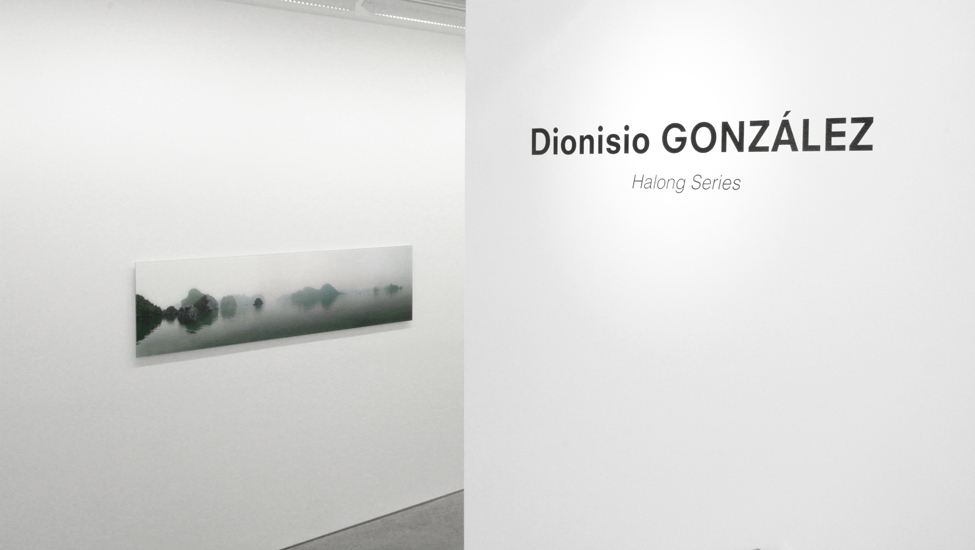 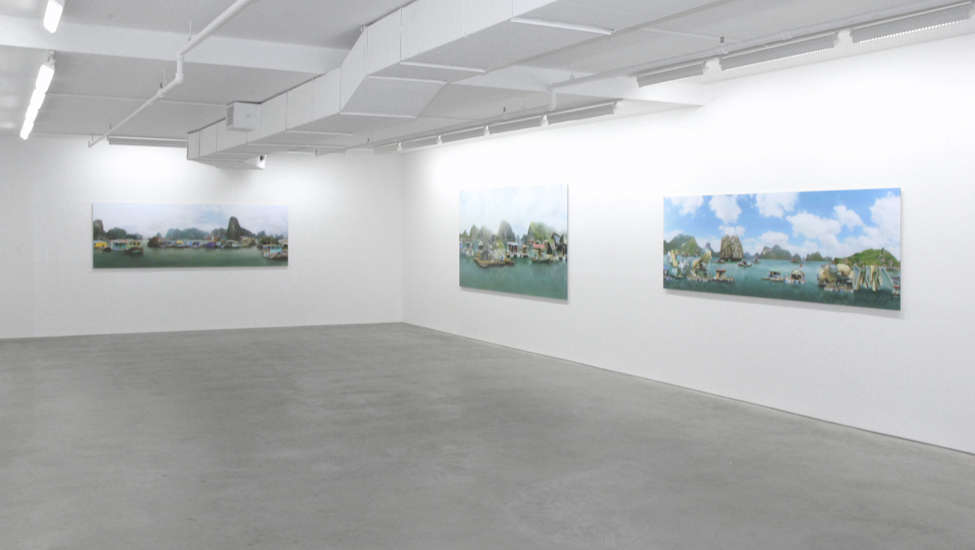 Galerie Richard is pleased to present the second solo show of Spanish artist Dionisio González entitled Halong Series from September 5 to October 12, 2013. The artist takes on the role of both photographer and architect by digitally urbanizing the free waters surrounding the Vietnamese islands in Halong Bay. The result is a marine city featuring a mix of ordinary boathouses with modernist architecture.

The series emphasizes the possible transformations because of mass tourism on the picturesque Vietnamese locale. Halong Bay has become a major tourist destination since it has been classified as a world heritage site by UNESCO and the Vietnamese government now aims to destroy all houseboats to allow tourists to better enjoy the landscape. González decided to support the 3000 people living on water by expanding the city with new virtual constructions. González wishes the inhabitants to enjoy their own landscape. The new modernist constructions suggest a foreign influence without completely disrupting the original cultural identity unique to Vietnam. The manipulations offer a renewed image to Halong, not one marked by isolation as a protected untouched destination but rather as an active place connected with the rest of the world. Each house is attributed with a distinctive personnality reflective of the occupants. This particularity along with the diverse architectures defies the usual idea of urban development. This works reveals a sense of wonder through the process of discovery.

Michel Foucault considered a boat to be the prime example of a Heterotopia. Defined as a physical localization of the Utopia, a Heterotopia is a concrete space that inhabits the imaginary. Dionisio González, like Le Corbusier with his unrealized drawings projects, proposes a visualization of this concept. The particular response to overpopulation, by proposing a socially diverse marine city complete with beautiful views shared by all, derives from a utopian perspective. Each house is a private paradise island with the ability to move freely within the society as well as beyond. The inhabitants of these slum houses and foreign modernistic architectures can be considered as whole populations outside of society. The desire to evolve and stay current with technological advances remains and is evident in the inhabitants’ homes that feature rendered architectural outbursts. Manifested through the organic forms of the structural interpolations are the residents’ aspirations for change and continuous growth. In these images, the juxtaposition of the two architectures suggests a rupture in time. A heterotopia can open or close itself, which makes it both accessible and isolated. This new urban structure can also close it spread out and open itself is sepqrqte even more from the coast. The Heterotopias fill a function in relation with other spaces of societies as spaces of illusion or of perfection. González respectfully crafts and integrates alternative survival strategies into the modest amphibian living conditions. The solutions envisioned in the digital virtual manipulations expose an anarchic potential that is equally imposing and enticing.

Dionisio González (Gijón, 1965) is senior lecturer at the Faculty of Fine Arts of the Universidad de Sevilla. His works are represented in prominent collections such as the Centre National d'Art et de Culture Georges-Pompidou in Paris, the ING Art Collection in Amsterdam, and the Margulies Collection at The Warehouse in Miami. His work has been exhibited in multiple institutions and museums such as the Museum of Contemporary Photography in Chicago, the Museo Nacional Centro de Arte Reina Sofía de Madrid (MNCARS), the Museu de Arte de São Paulo or the Toronto Museum of Contemporary Canadian Art. He has received numerous awards such as the Premio Pilar Juncosa and Sotheby’s from the Fundació Pilar y Joan Miró and the European Photography Arendt Award in 2013.