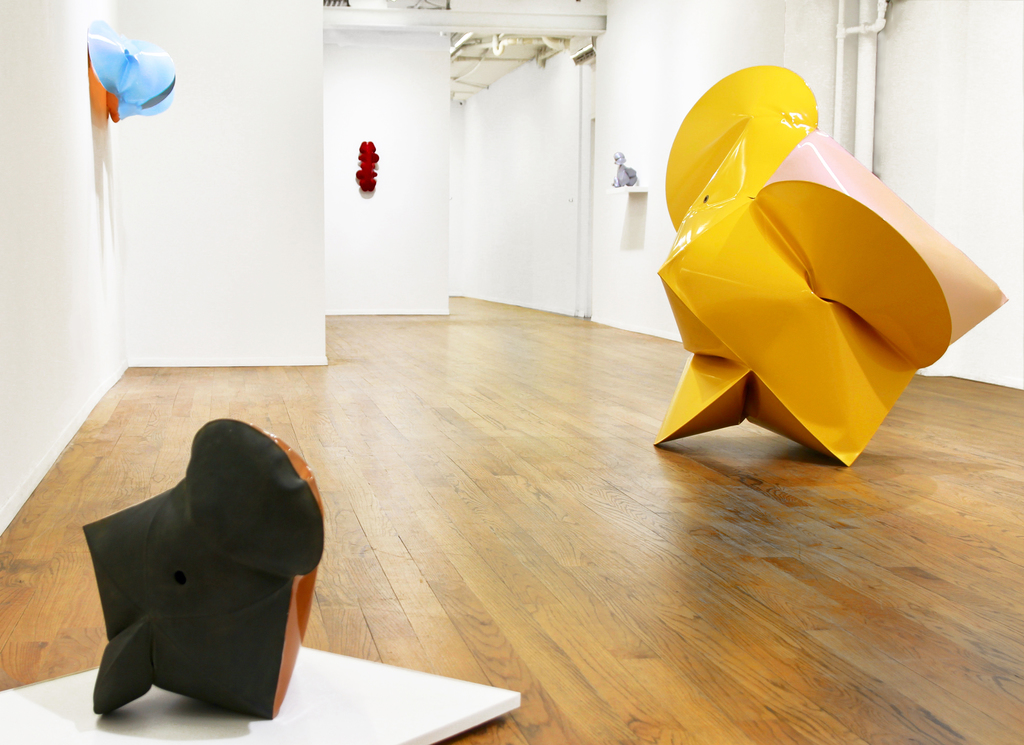 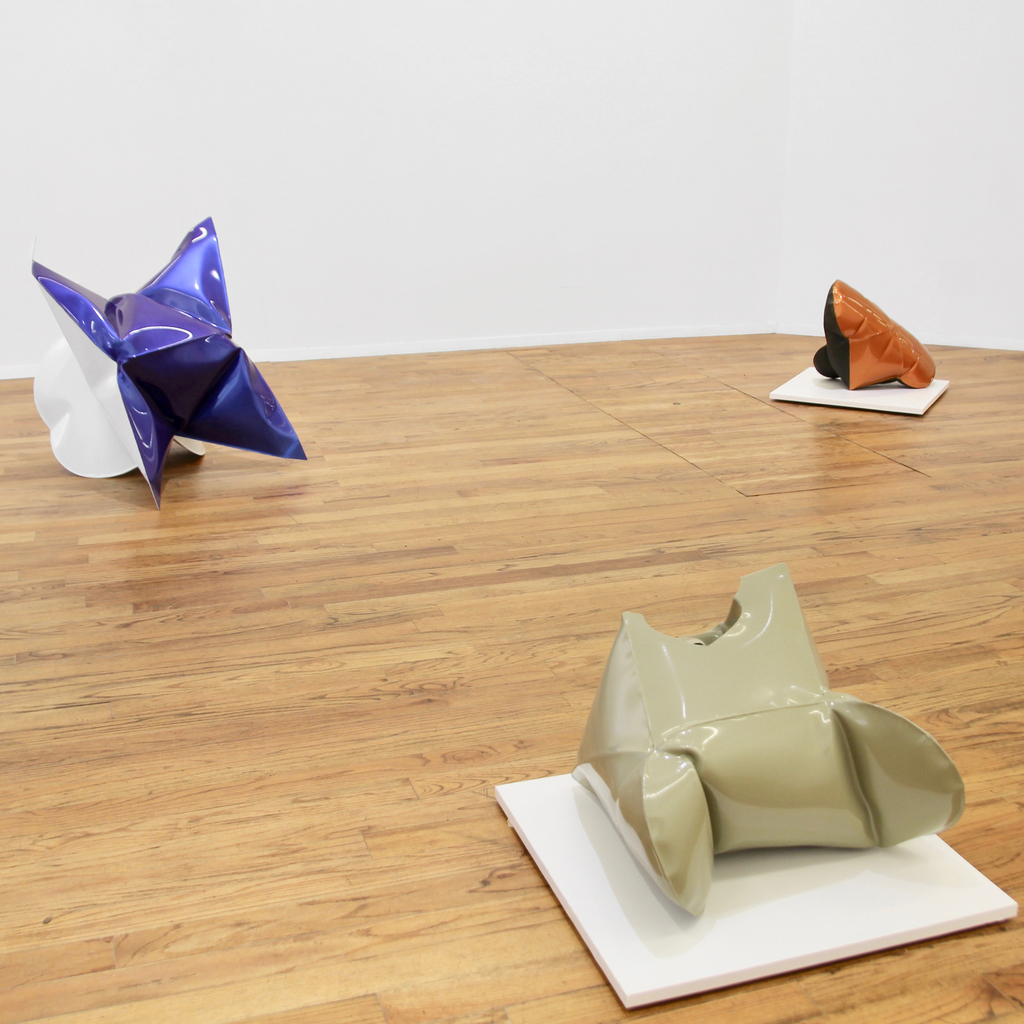 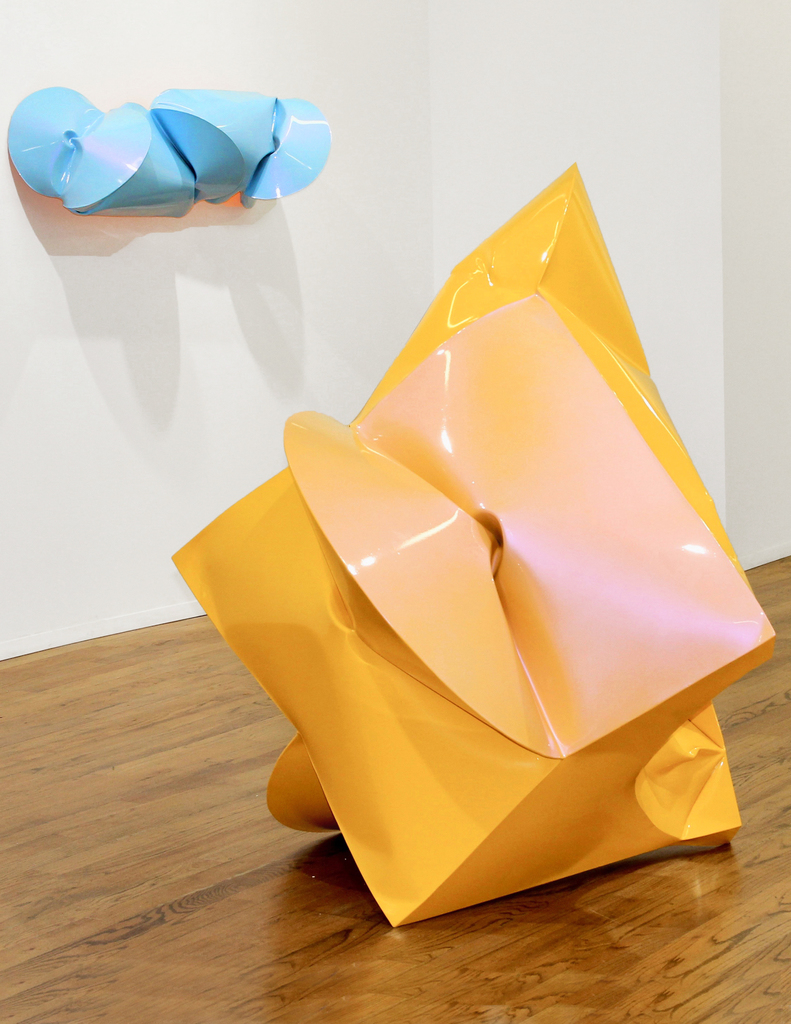 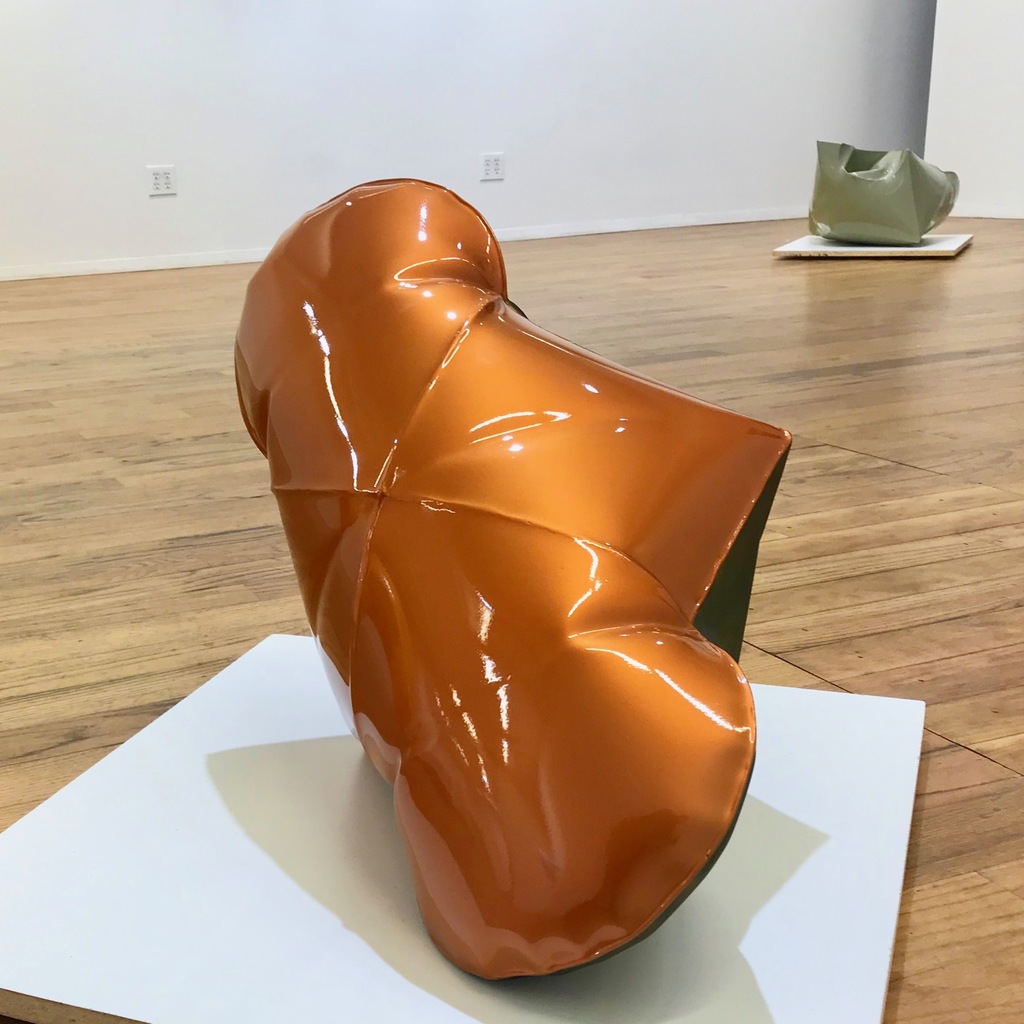 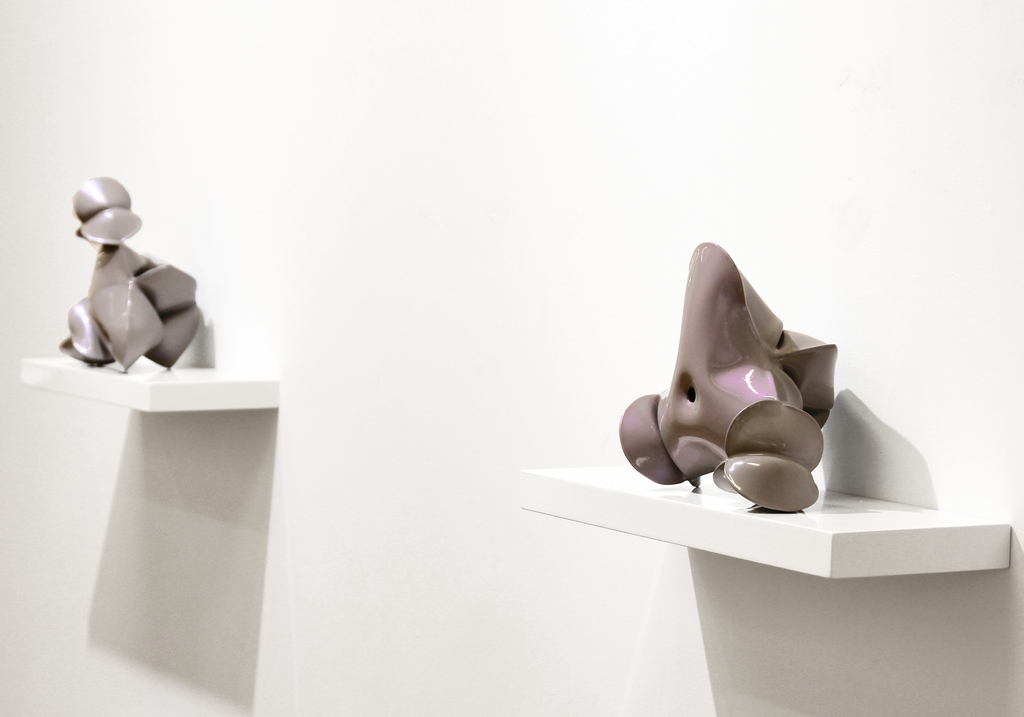 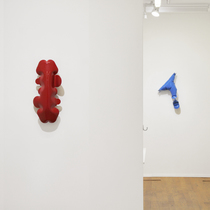 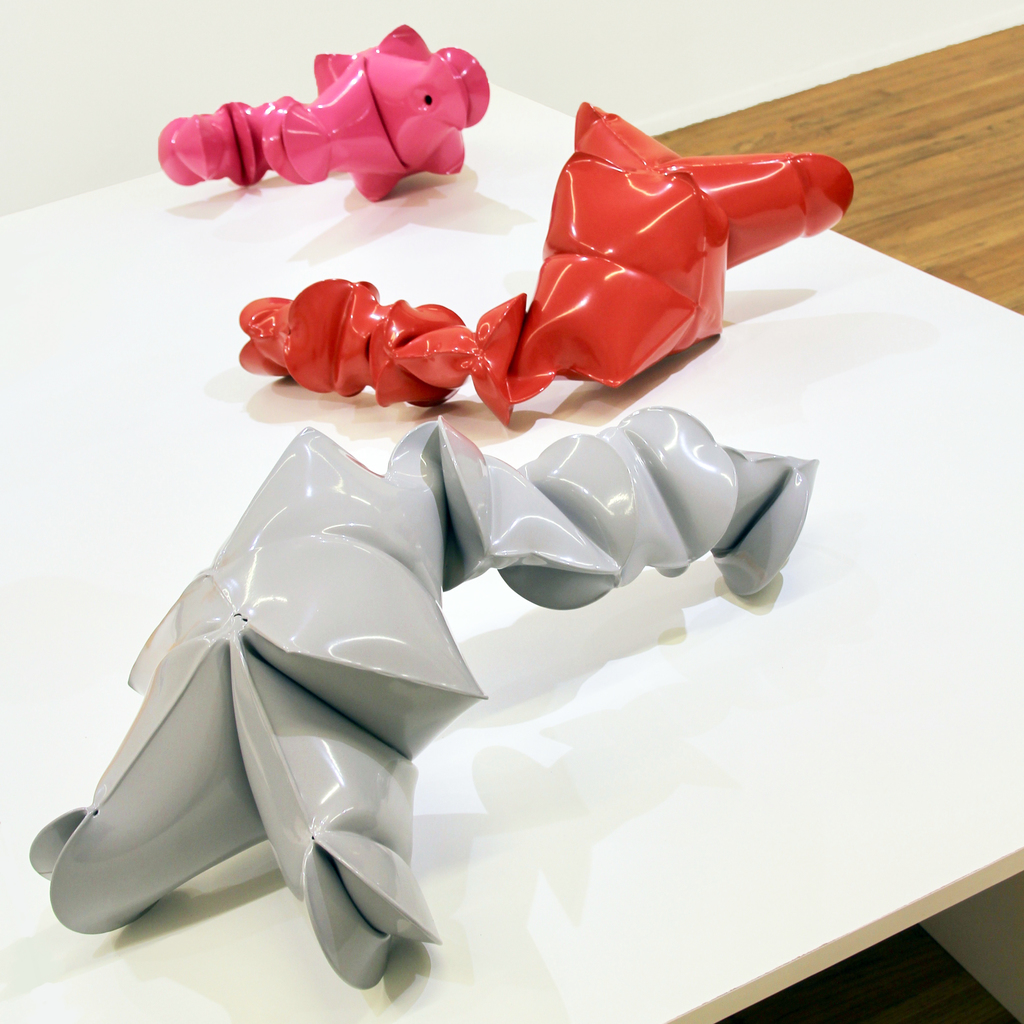 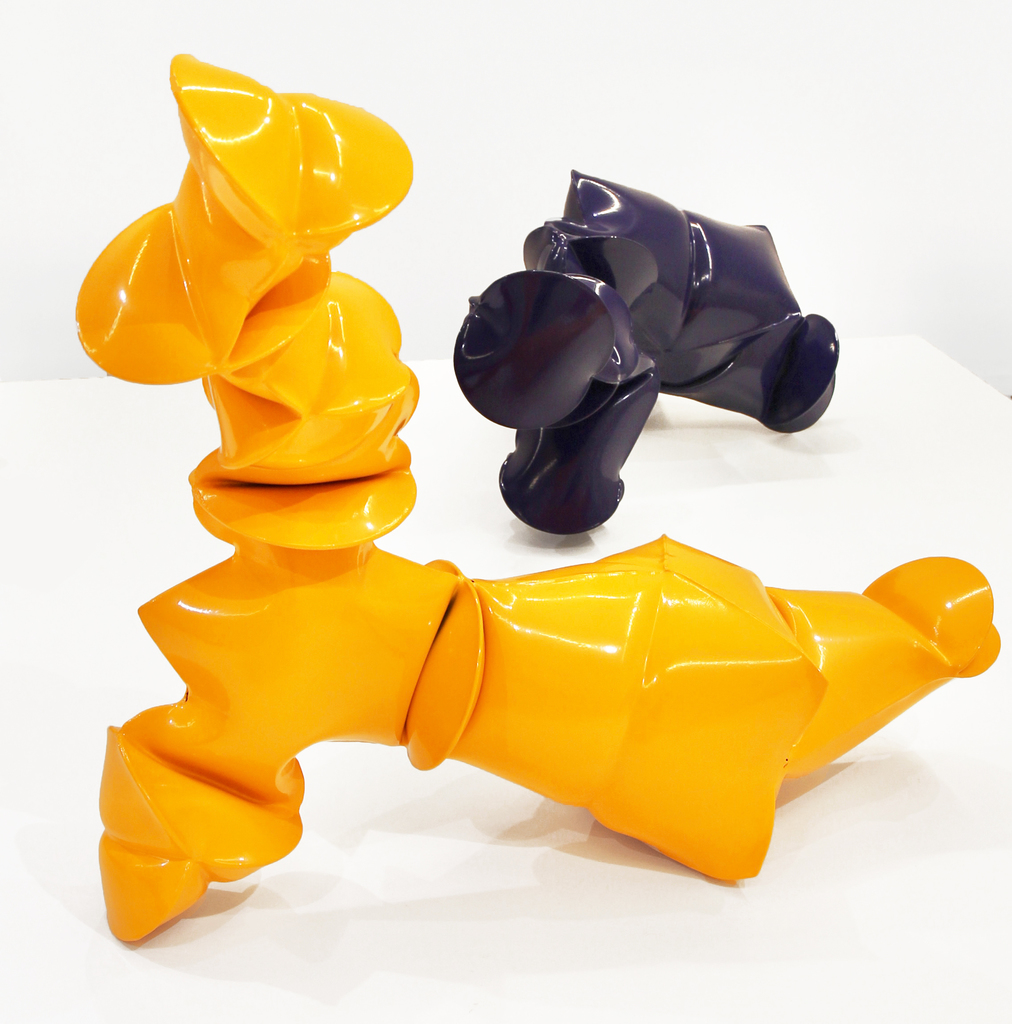 From November 6 to February 22, Galerie Richard is pleased to present “Vital Expansion,” Jeremy Thomas’ third solo show in the New York gallery. Opening soon after his major one-man-show at The Center for Contemporary Arts, Santa Fe from February to April, the exhibition’s title calls attention to the expansive processes and subjects matters critical to the artist’s oeuvre. It is the central element in his fabrication process, in which compressed air is used to inflate stainless heated to the point of malleability at around 2000 degrees Fahrenheit. The objects exhibited also draw attention to the concept of expansion in their employment of assemblage, a recent discovery for Thomas that has endowed him with far greater agency in his creative process.

A number of Thomas’ most compelling recent works can be found on a square platform and the wall adjacent to it in the back gallery. These idiosyncratic objects take their inspiration from visual models of neurotransmitters such as serotonin, norepinephrine, dopamine, and glutamate. The elemental circles and hexagons of benzene rings and the varied matrices of carbon atoms are discrete pieces of the bio-chemical puzzle from which consciousness emerges, and in Thomas’ studio became powerful sites of aesthetic possibility. The structures they yielded are highly arthropodic, suggesting scorpions or lobsters from another—perhaps more modernist—universe. The correspondence between Jeremy Thomas’ sculptures and animals, plants, and so on are diverse and infinite as the natural expansion of the steel creates organic shapes that you can find in all-natural processes, with several exemplary cases present in the front gallery.

Jeremy Thomas (b. 1973, Oklahoma) is an American sculptor who lives and works in Santa Fe, New Mexico. His work will be the subject of another solo exhibition at Galerie Richard, Paris in 2020. Thomas’ art has representation in the public and corporate collections of the Albright–Knox Gallery, Buffalo, NY; the Scottsdale Museum of Contemporary Art, AZ; the New Mexico Museum of Fine Arts in Santa Fe, NM; the Kunstsammlung F. Hoffman-La Roche AG, Basel; the Frederick R. Weisman Art Foundation, Malibu, CA; and Fidelity Investments of Albuquerque, NM.