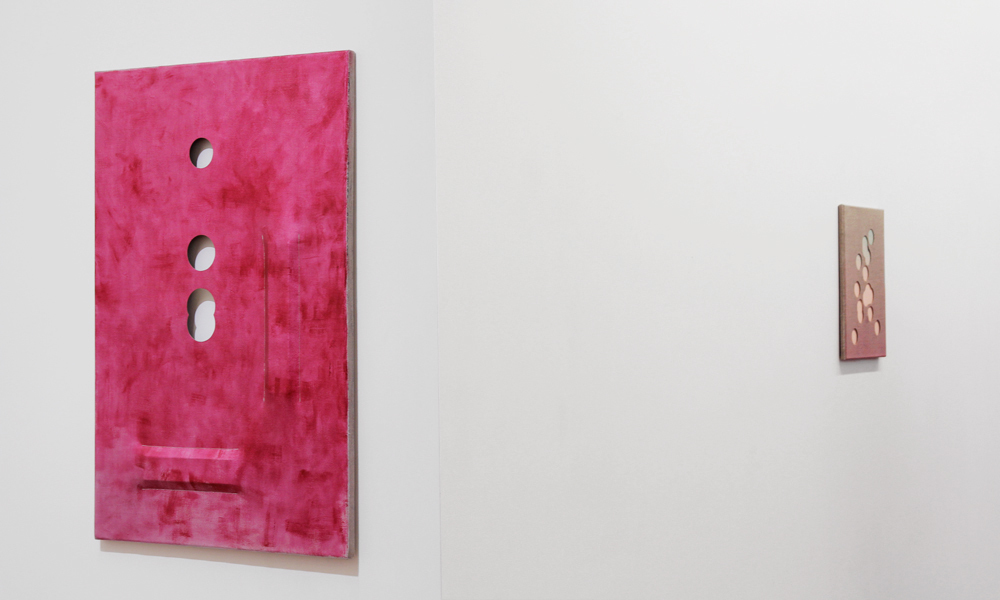 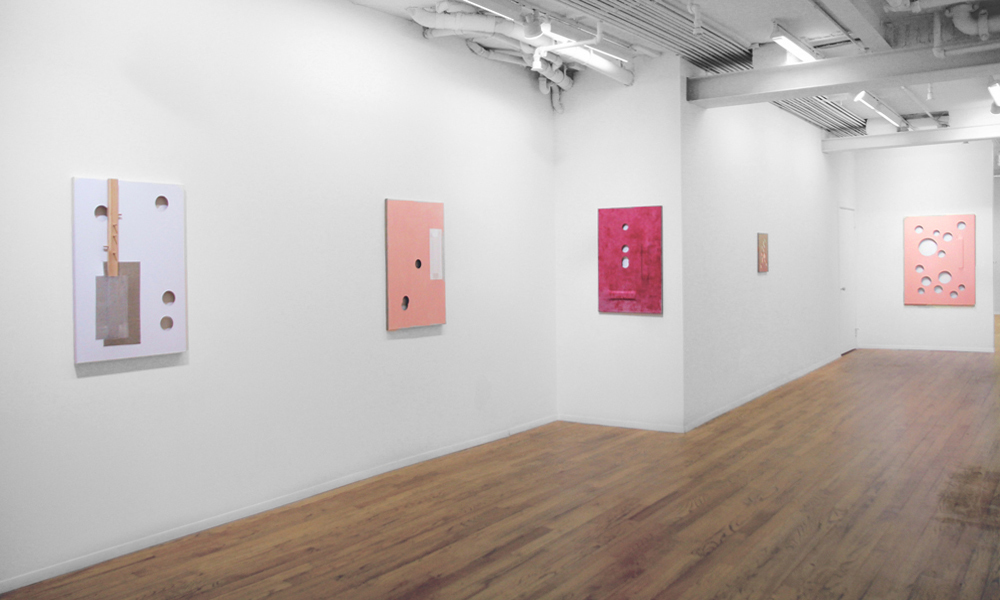 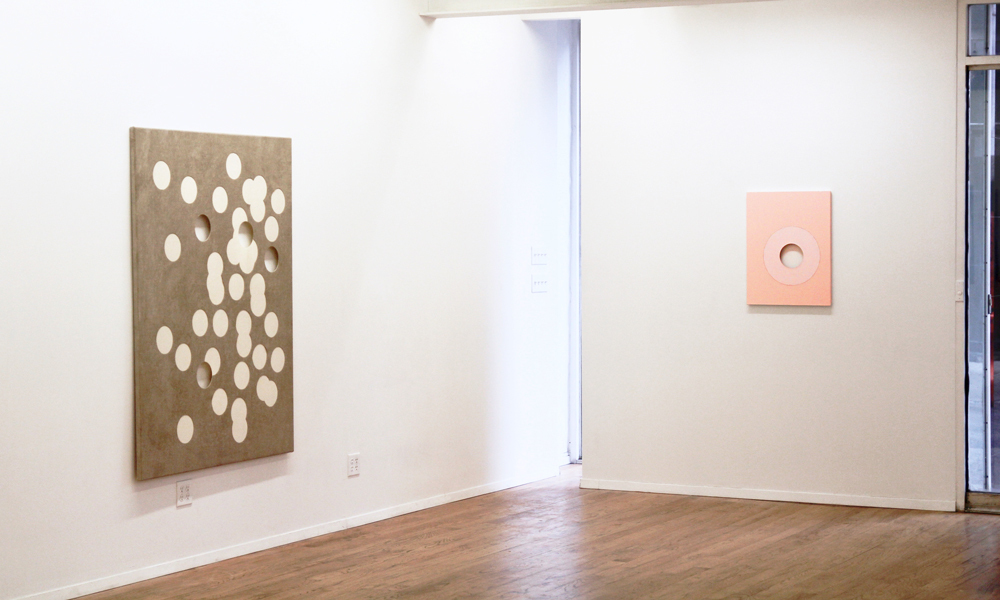 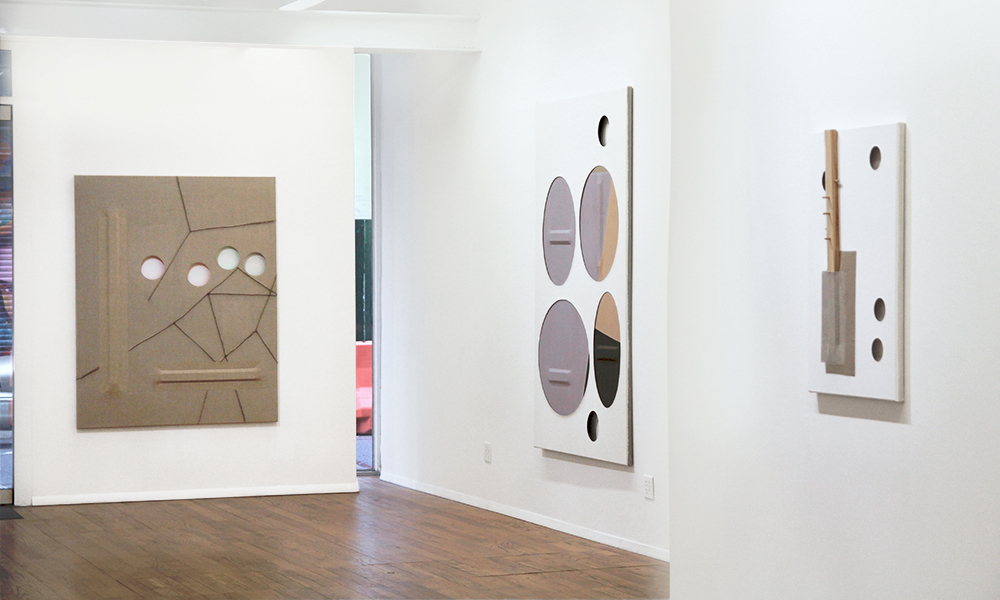 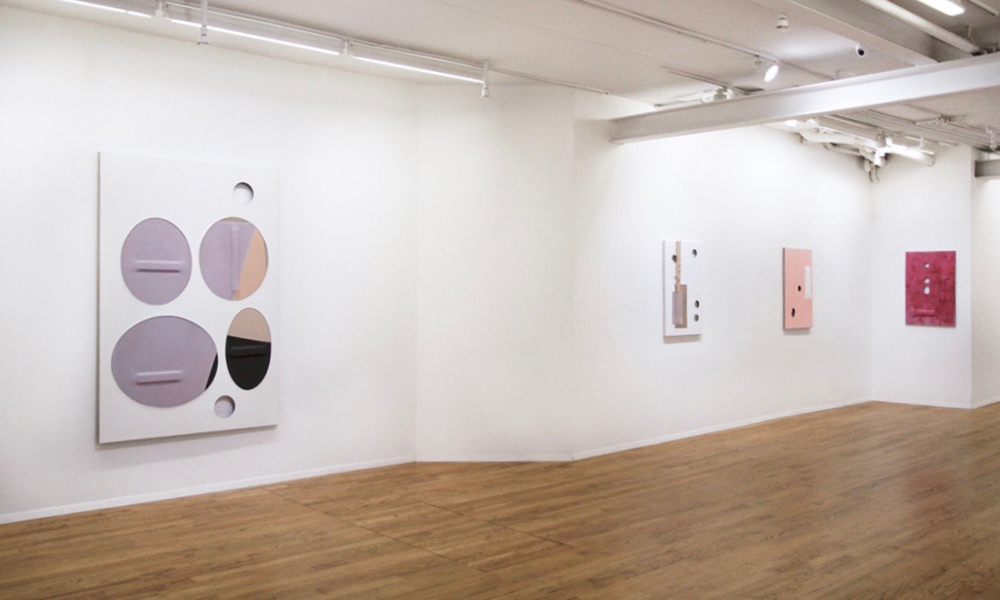 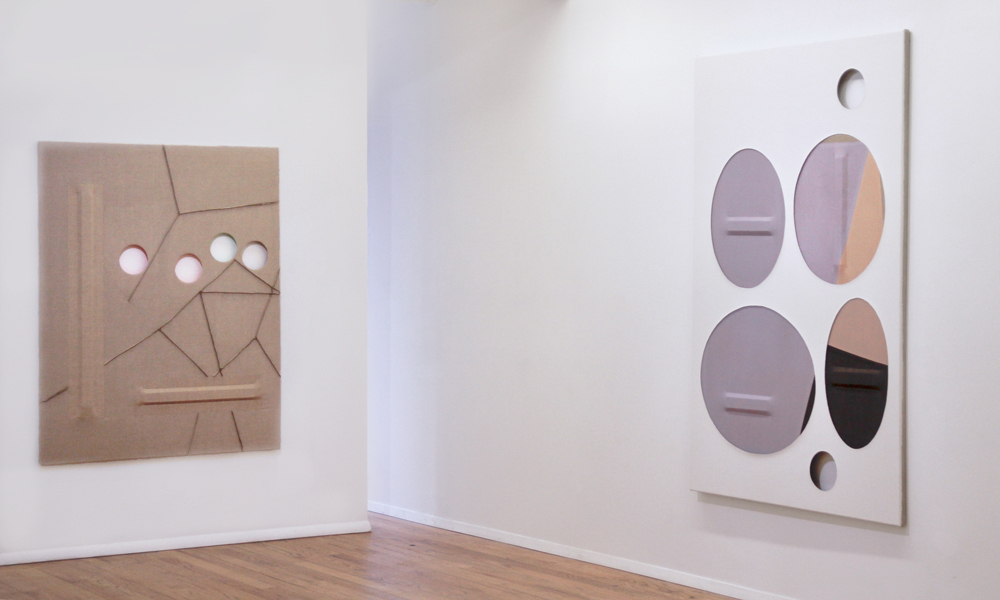 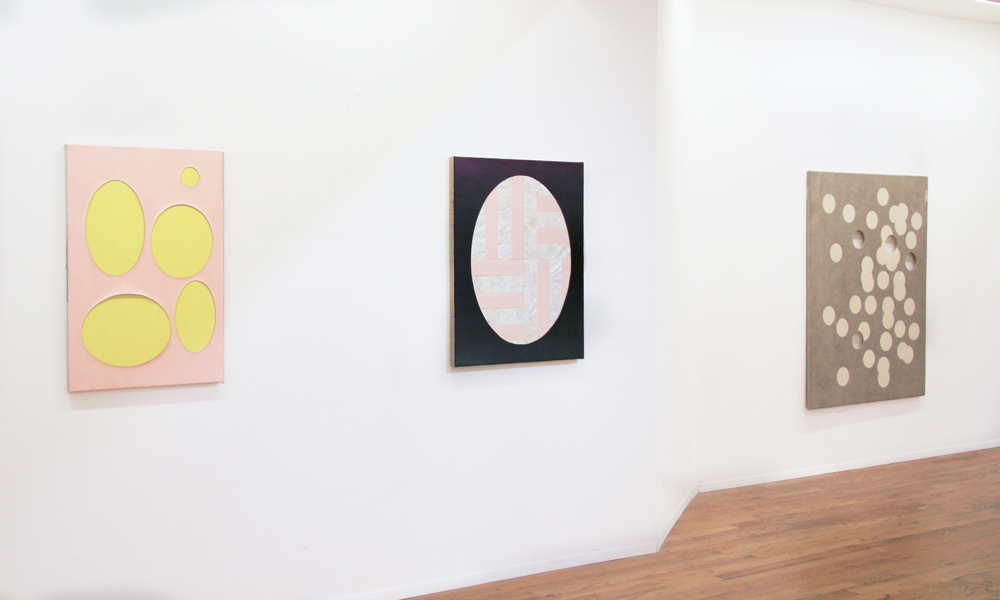 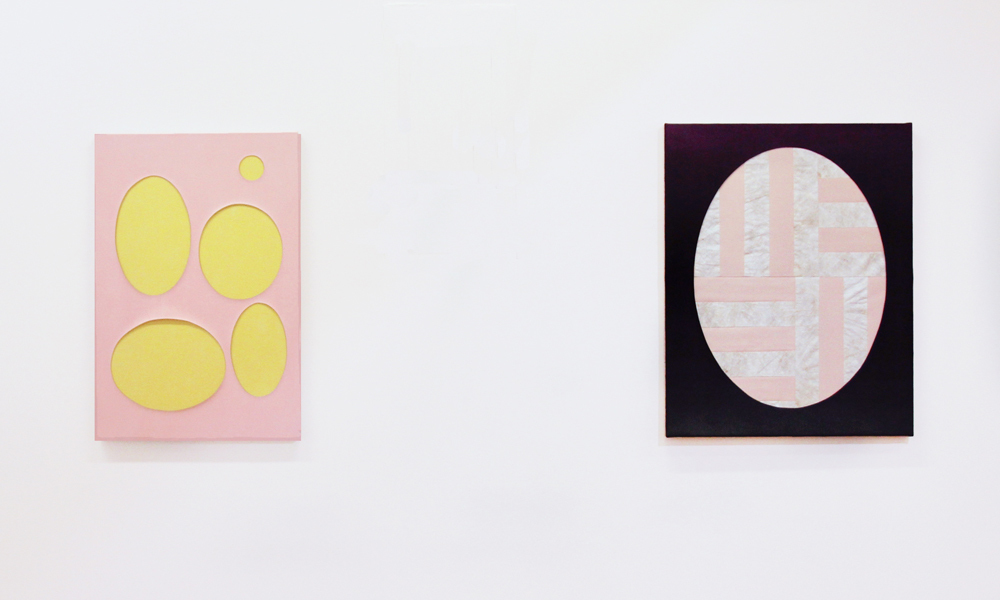 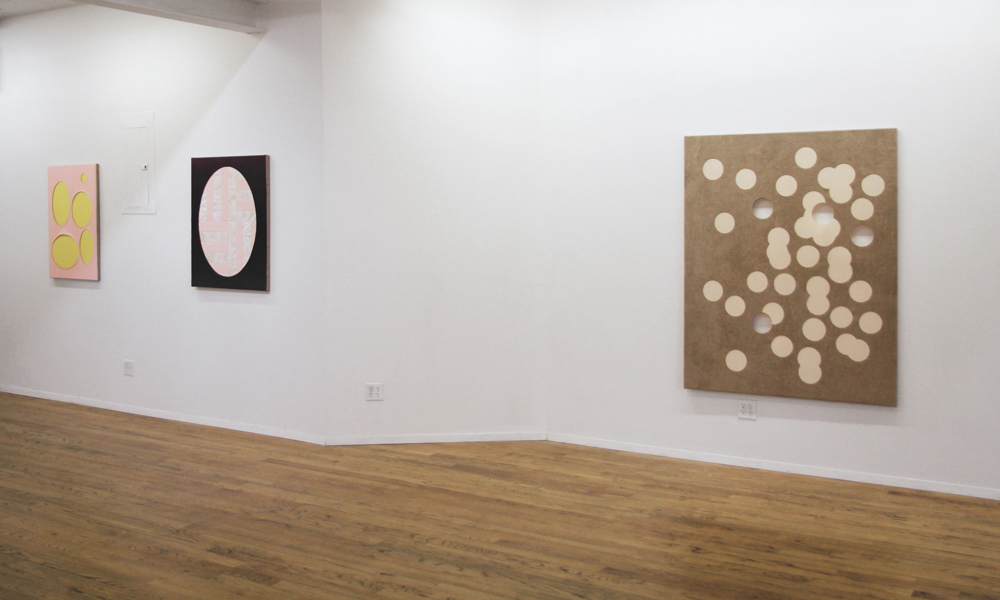 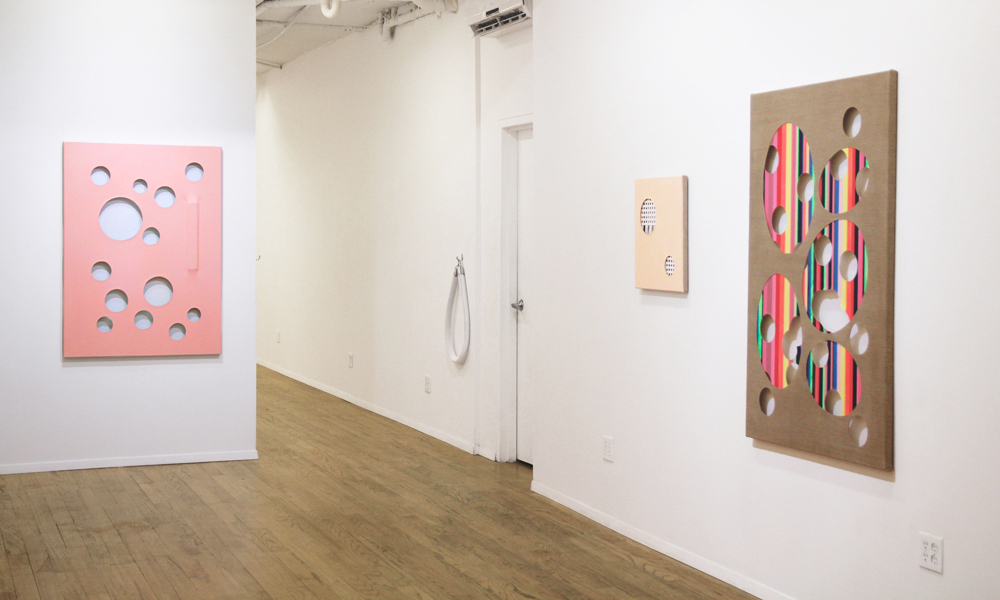 Galerie Richard, New York, presents The Fabric of Reality by Sven-Ole Frahm from April 18 to May 20, 2018. This is the seventh solo show of Sven-Ole Frahm with Galerie Richard and the third solo show in New York City. The title could suggest that the artist emphasizes the physicality aspect of his creations with textures, light and space, at the opposite of virtual images. Frahm began his career by pouring paint on a canvas on the floor, cutting it in geometrical shapes and sewing them together. He continues to develop geometrical compositions mixed with three-dimensional interventions on the canvas. In these newest works, he makes rounded or oval holes in the canvases. In this exhibition the viewer can enjoy a painting with one wall and different variations up to a painting including a large amount of small holes dispersed in the canvas. These holes can let the wall appear or reveal another painted canvas underneath. The wall can get colored reflections from the paint on the back of the canvas.

The painting titled #218 Glamping Deluxe gathers three processes from three different periods of his works: the sewing process with a view of the reversed side of geometrical lines with the two linen, two wood panels which look like inside the canvas such as implants, and circled holes on the canvas with colored reflections. In the painting titled Debaser, two rounded holes in the canvas are filled with a grid of horizontal and vertical white strips of canvas. His aesthetics varies from #209, a suprematist or minimalist rounded hole inside a rounded sewed shape on a rectangle canvas to the colorful exuberant Soda Pop with holes into holes through two canvases, the first natural linen canvas magnifying the second canvas underneath painted with colorful vertical stripes. The dominant color in this exhibition is pink with subtle shades. These thirteen paintings are all different with a specific focus for each of them.

Sven-Ole Frahm continues to surprise and challenge the limitations of the painting and its canvas. There is always a sense of playfulness in his creations as well as a sense of perfect balance in the compositions and arrangement of colors. He invites the viewer to enlarge the field of investigation of paint on canvas as well as the post-modernist revisit of Art History, in particular in Central Europe in the XX century.

Sven-Ole Frahm (b.1972) lives and works in Berlin, Germany. He graduated from the Art Academy in Dusseldorf in 2001. Frahm has won the prestigious Villa Romana Prize in Firenze in 2003, the ‘Bergischer Kunstpreis’ for painting at Solingen Art Museum in 2006. His work is in the Collection of Société Générale, Paris. His work has been exhibited in galleries throughout Europe including Paris, Berlin, Düsseldorf, Cologne, London, Amsterdam.