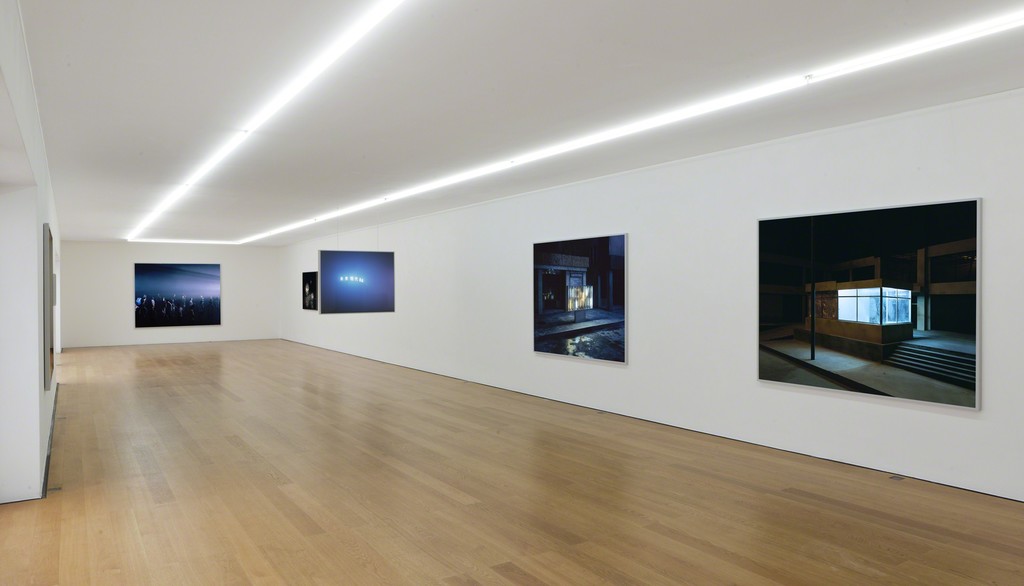 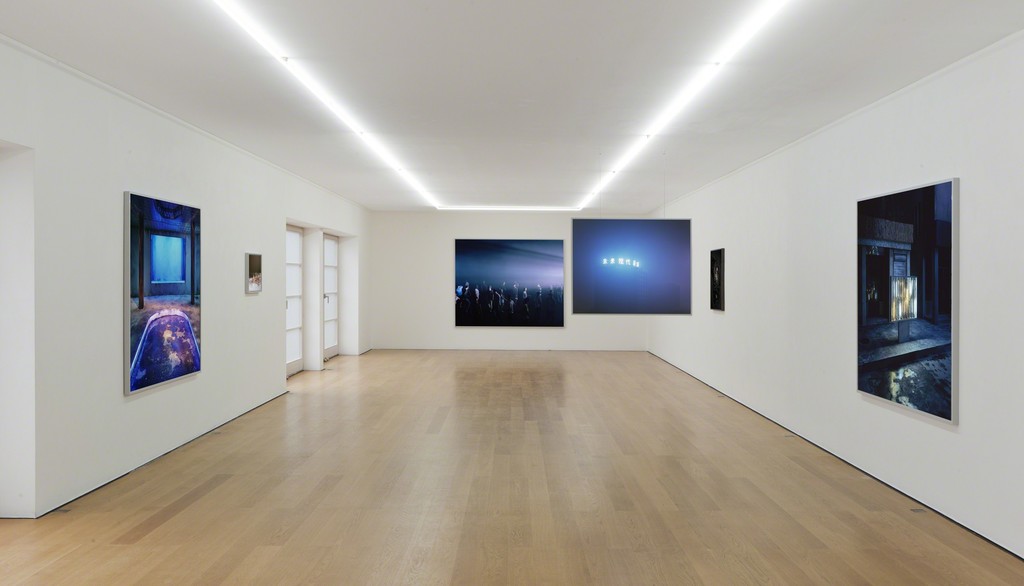 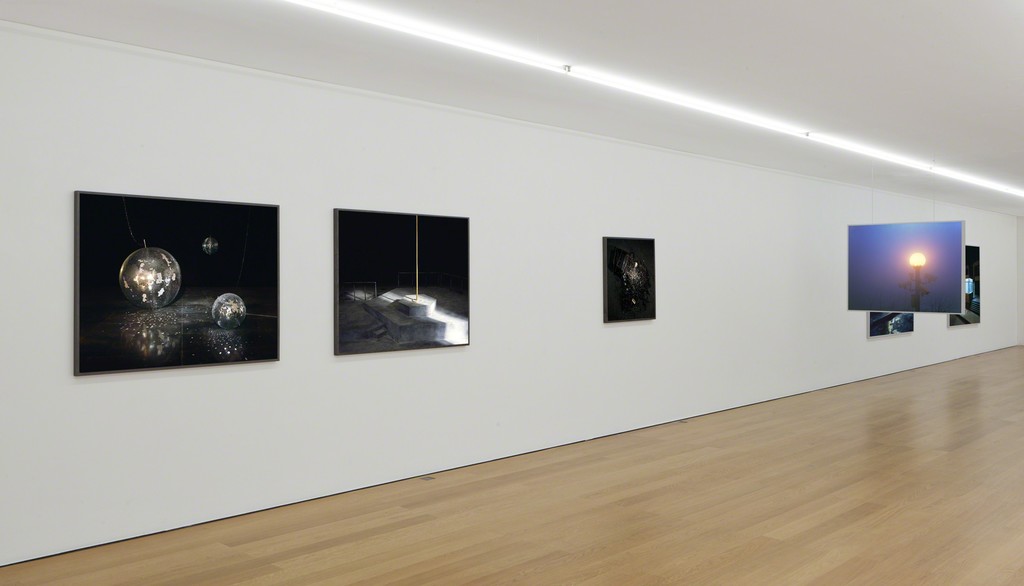 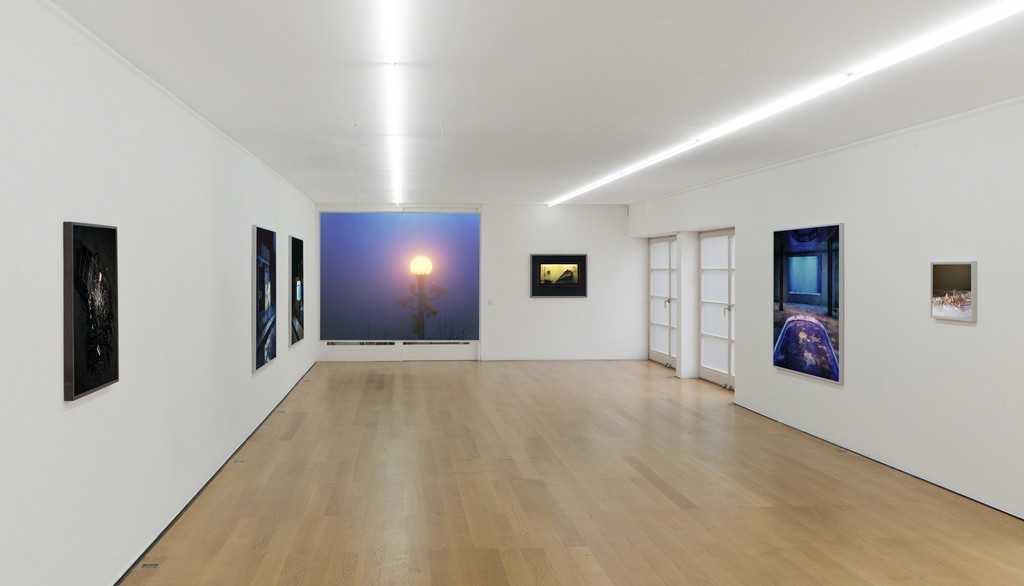 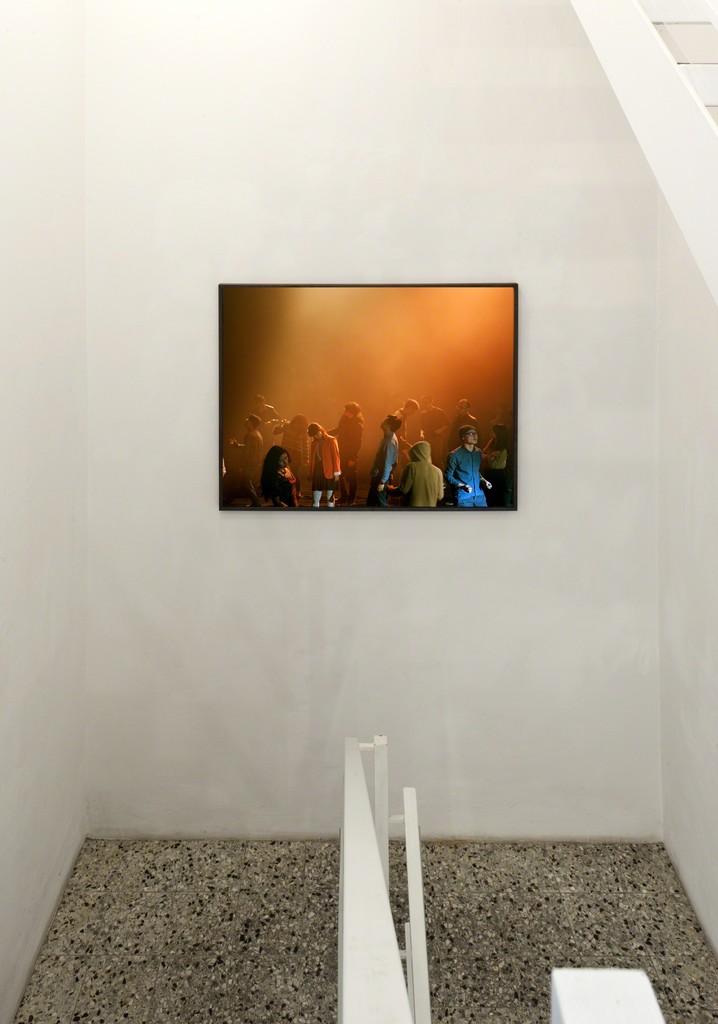 Yesterday Shop is the second solo exhibition of Chinese photo artist Chen Wei, presented by Galerie Rüdiger Schöttle.
Several staged color photographs of various formats are on view. Painting, photography and film serve Chen Wei as sources of inspiration and echo in his choice of motifs, compositions, and the coloring and lighting of his works.

As one enters the exhibition space on the first floor of the gallery, one encounters a group of people dancing, suffused with blue light, absorbed in the moment. The location itself is not discernible; merely a few light cones traverse the space and suggest a dance club. Chen Wei commented on this work, titled “In the Waves #6,” in an interview with the British newspaper The Guardian: “In China, nightclubs are the only places where large numbers of people are allowed to get together. Gatherings of people all doing the same thing would never be permitted anywhere else – certainly not on the street. It would make the government nervous. This was taken in Beijing, where I live, last year. It’s about dreams and reality: people in China go out clubbing to chase their dreams, but they can’t escape from what’s happening outside …” (The Guardian, April 30, 2014, interview by Karin Andreasson).

Chen Wei’s works examine current social issues. With brutal honesty, he brings our living conditions, dreams, desires, and fears into sharper focus. After careful preparations, and with the help of a select group of assistants, he produces his works on film stages or in his studio. He stages still lifes, empty interiors, or entire deserted strip malls reminiscent, in composition and choice of motifs, of Edward Hopper’s works.
“In the Waves #6” is a special exception to the other works in the exhibition, as there are protagonists who inhabit his often deserted backdrops. Panning the exhibition, however, one cannot help but notice that the other works always bear witness to human presence as well, while the people in “In the Waves #6” almost seem like accessories.

Chen Wei was born in 1980 in the Zhejiang Province in China. He lives and works in Beijing. From March 27th through May 14th, 2016 Chen Wei will exhibit at the JNBY Foundation in Hangzhou, a show curated by Francesco Bonami. In 2015, his photographs were on view in a solo exhibition at the K11 Art Space in Shanghai as well as part of a group exhibition of contemporary Chinese photography at the Museum Folkwang in Essen, Germany. In 2014, he exhibited his works at the Australia China Art Foundation in Sidney and participated in the following group exhibitions: Chinese Photography 1911–2014 at the Stravanger Art Museum, Stravanger, Norway; My Generation: Young Chinese Artists at the Tampa Museum of Art, Tampa, Florida, and at the Museum of Fine Arts, St. Petersburg. His works are represented in numerous international collections. (S. Gilder)