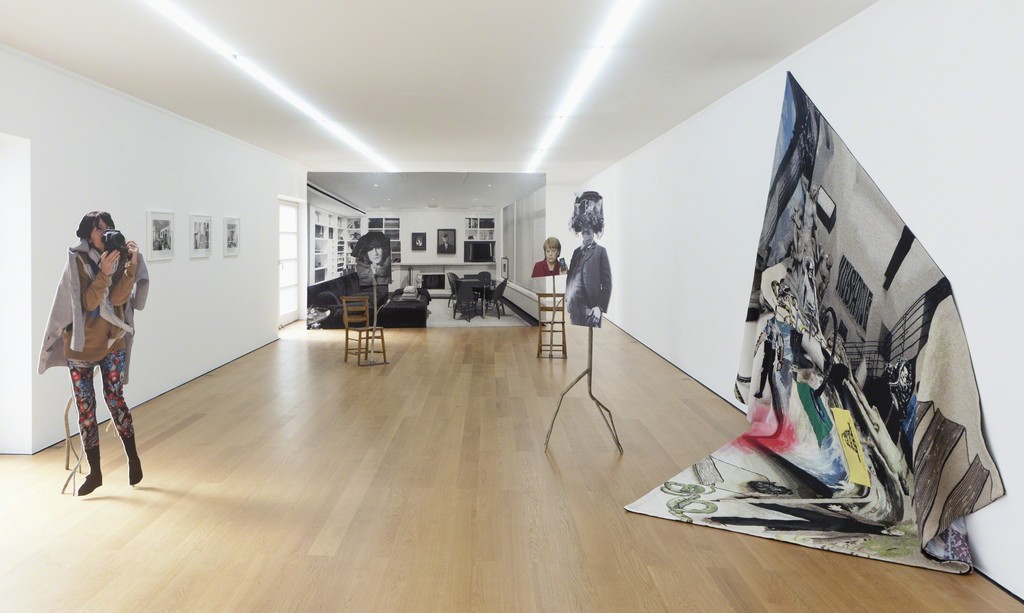 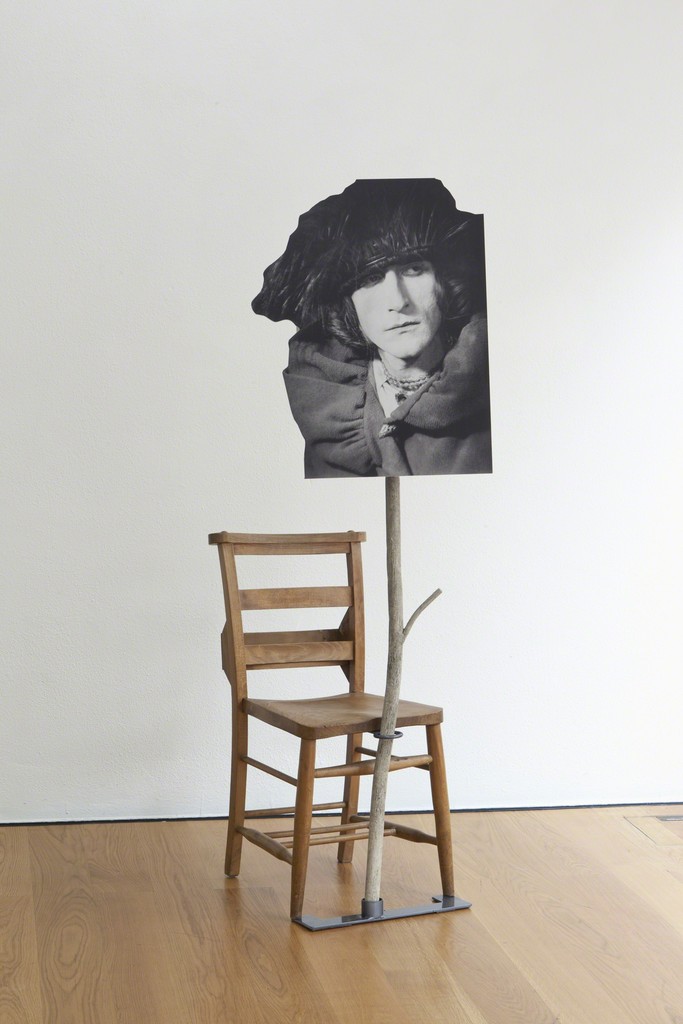 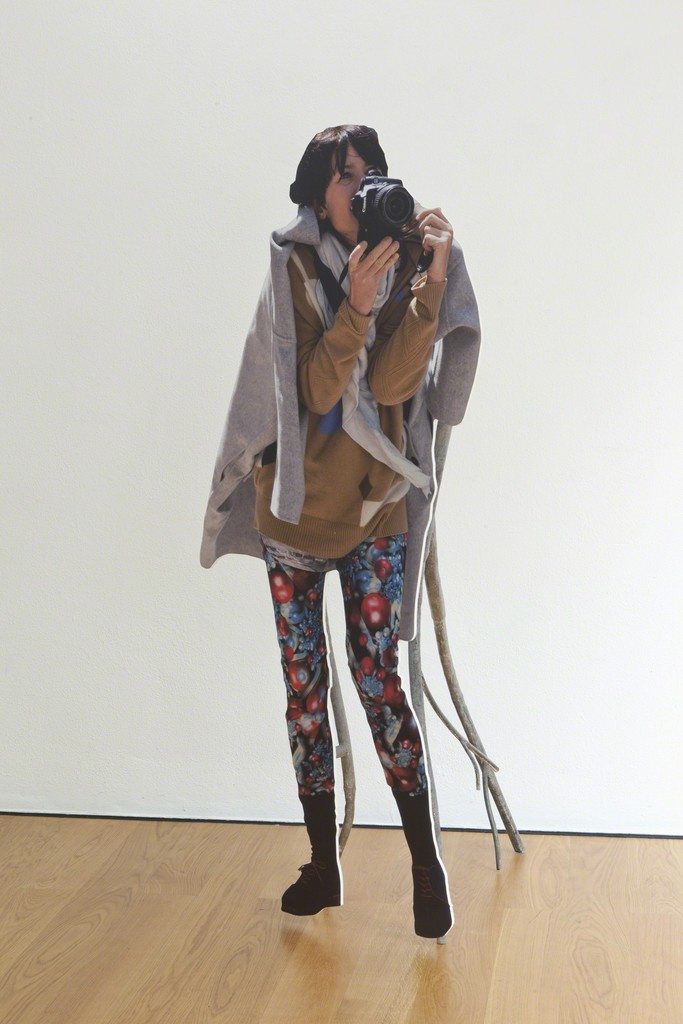 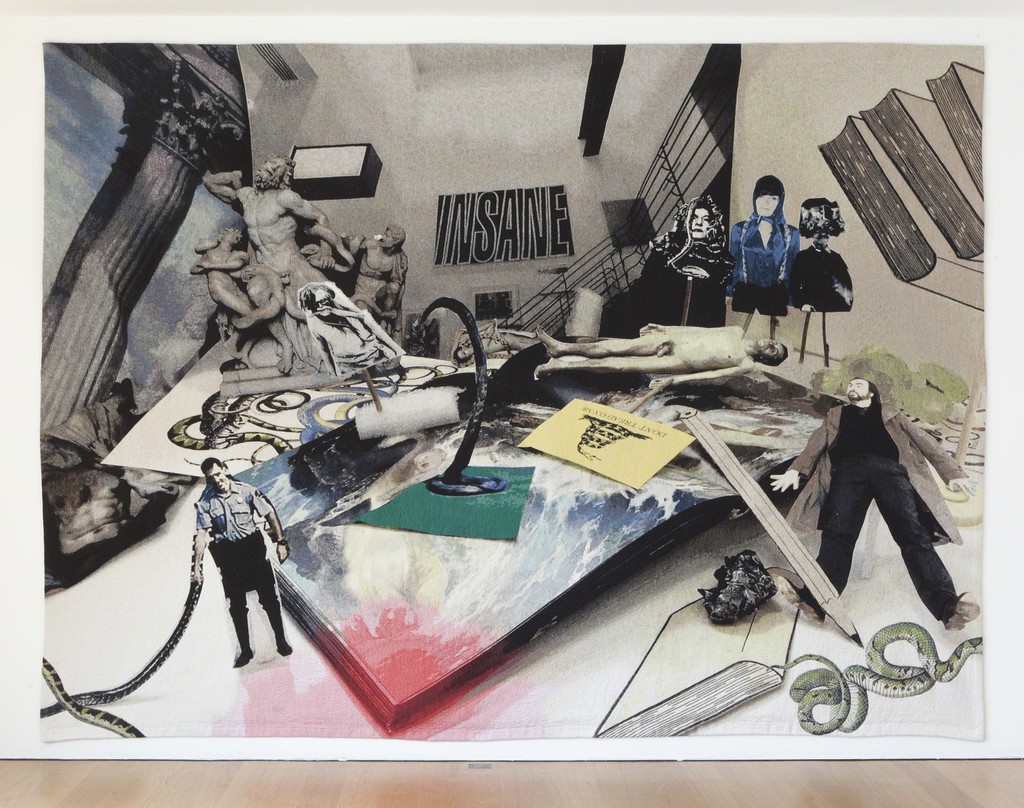 “Madness and Ritual” is the title of Goshka Macuga's fourth exhibition at Galerie Rüdiger Schöttle. This
exhibition seeks to put the mental state of the art world to the test and subjects the gray area between madness
and mental health to close examination.

On the occasion of the 8th Berlin Biennale, Goshka Macuga has taken on a new genre by staging a play for
theater. Another play sparked Macuga's project: "Hamburg Conversations on Art and Culture," penned by the
renowned art historian Aby Warburg (1866–1929) for a family reunion, is a comedy exploring a dispute between
the conservative and the radical wing of the art scene at the time.

Warburg’s material prompted Goshka Macuga to write an amusing analysis of today's art world. Her play,
performed in Berlin – consisting in equal parts of choreography, lecture, and performance – is the inspirational
basis for the exhibition at Galerie Rüdiger Schöttle. Many of the works on view are closely connected to the
performed play; the exhibition emphasizes the medium of collage, which takes on two- and three-dimensional
forms and culminates in a multicolored tapestry. The exhibition shows sculptures of the protagonists and a new
video work which emerged from recordings of the play. Goshka Macuga's works cannot be pinned down to a
single medium, but rather a method which is connected to thorough research and which, therefore, frequently
corresponds to historical and curatorial approaches. Goshka Macuga already dealt with Aby Warburg before, in
her exhibition "I Am Become Death" (2008), specifically with his “Mnemosyne Atlas” and his writings. Macuga
detects parallels to her own work in his way of working, his very unconventional approach, and his examination
of the function of the predetermined contents of images.

Goshka Macuga, born in 1967 in Warsaw, lives and works in London. She is one of the preeminent figures of
the artist generation who has generated strong signals in contemporary art by working retrospectively and by
analyzing current events. Her tapestries, sculptures, installations, photography, collages, and films often
question not only the presentation and production of art, but also curatorial practice, which she has adopted for
her own work.

Macuga has been the subject of many international solo exhibitions: at the Tate Britain in 2007, the Whitechapel
Gallery in London in 2008, the Kunsthalle Basel in 2009, the Walker Art Center in Minneapolis in 2012, the
Museum of Contemporary Art Chicago in 2014, and the Kunsthalle Lund in 2014. In 2006, she participated in
the São Paulo Biennial, followed by the Liverpool Biennial in 2006, the Berlin Biennale in 2008, the Venice
Biennale, and the Berlin Biennale again in 2014. Her spectacular contribution to the Documenta 13 – a diptych
consisting of monumental photorealistic tapestries – will long be remembered.