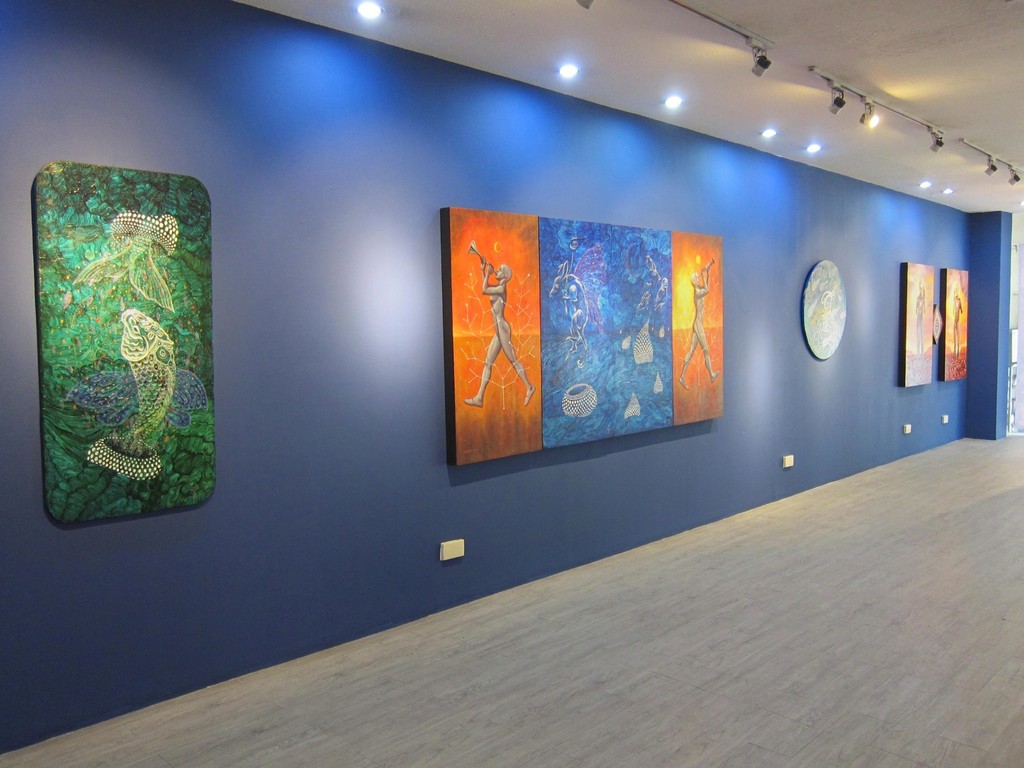 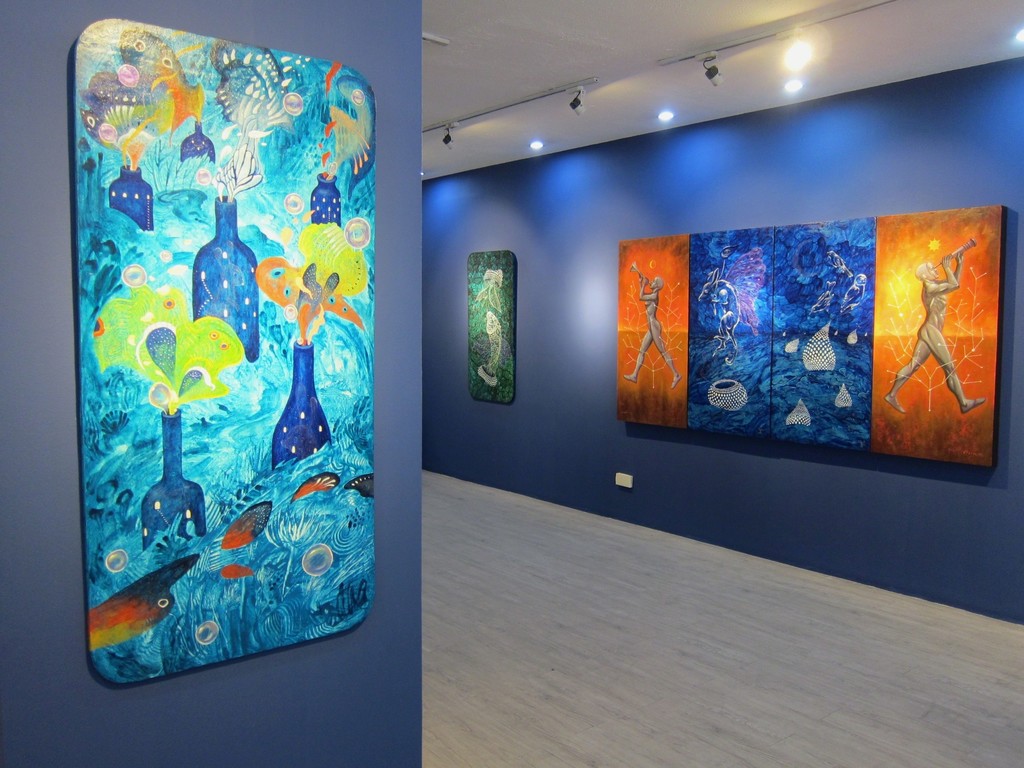 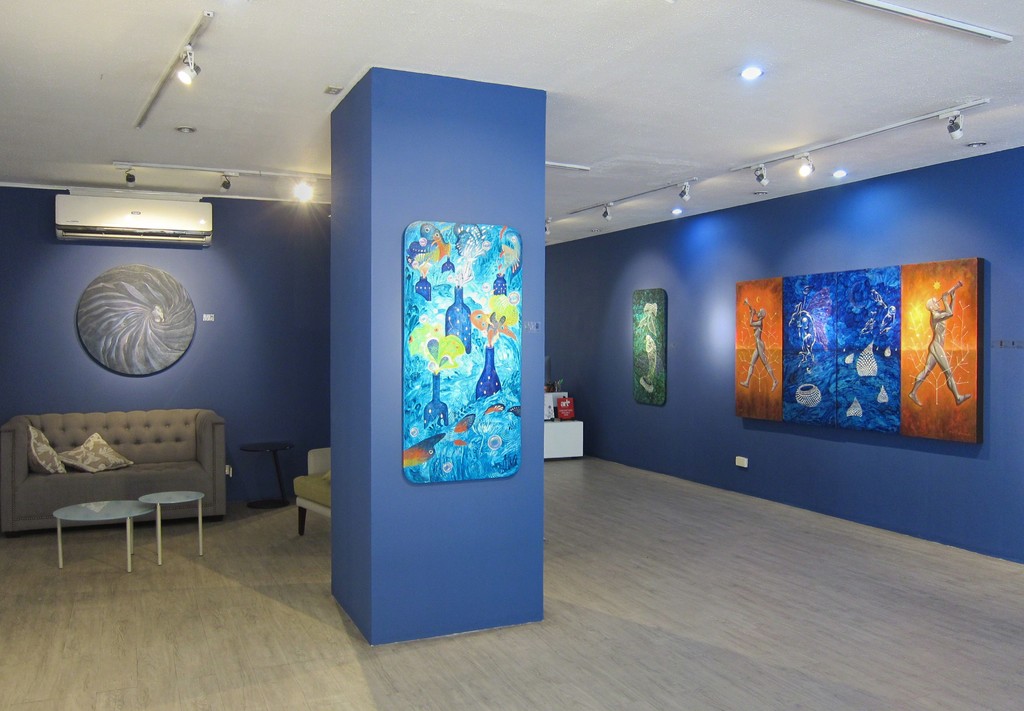 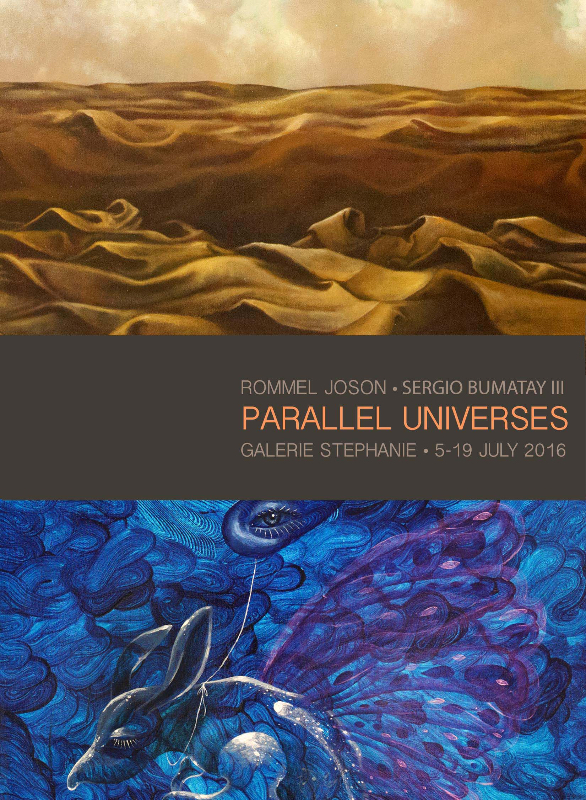 Galerie Stephanie proudly presents Parallel Universes, a two-man exhibition of the multi-awarded artist-illustrators Sergio Bumatay III and Rommel Joson from July 5 to 19, 2016. In this exhibition, both artists explore the idea of parallel universes: self-contained realities co-existing with ours, which may or may not have any relationship with ours, opening viewers to fantastical worlds that embody the limits of possibility.
In his 12-painting body of work for this exhibition, Metrobank Art and Design Excellence (MADE) Grandprize winner Sergio Bumatay III contemplates and continues from his winning piece entitled The Extraordinary Manifestation of Something Undeniably Possible, which is in essence a meditation on the afterlife. Focusing on transcending the limits of our existence, Bumatay, posits mortality as the doorway to enter the other world. Building on the award-winning piece, Bumatay creates glimpses of this world through diaphanous beings blending with ethereal blue environment, seeming to imply the essence of existence, or the soul. In the piece, After I Chose You, a deer-like creature prances about, carrying in its womb an embryonic winged child. Passage and movement are a predominant theme in his works, where winged creatures appear to either float or fly in dreamy abandon.
In contrast, Rommel Joson, a magna cum laude graduate from the College of Fine Arts in the University of the Philippines, Diliman, presents pairs of human-like beings entangled in ripples of luxurious cloth. In these pairs, notions of connection and disconnection are apparent. While the ripples of cloth physically bind them, all but the paintings Blackhole and Our Strange Gravities show them gazing into each other’s eyes, implying the nature of relationships – where sometimes, there is communion between two distinct individuals, but more often, there is the insufferable distance that gets in between them, making individuals run parallel lives, lived beside each other, but never to intersect.
Parallel Universes presents paradoxical aspects of both limits and unbounded potential. To view the exhibit, one may visit Galerie Stephanie from Monday to Saturday, from 10am to 7pm. For inquiries please call (+63 2) 709 1488 or email [email protected]. For more information visit www.galeriestephanie.com