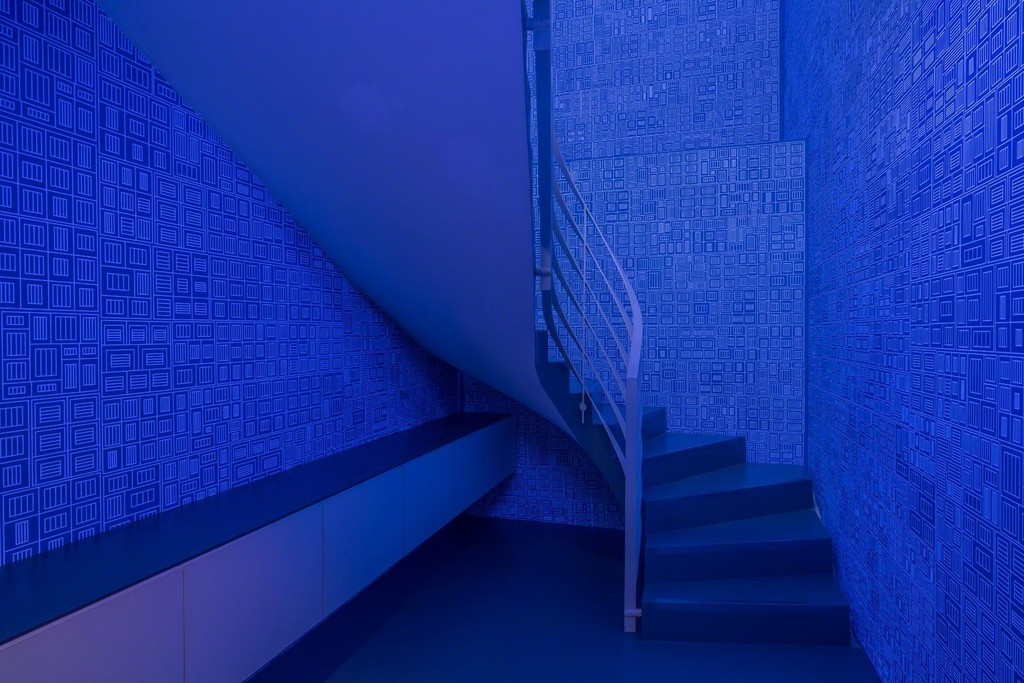 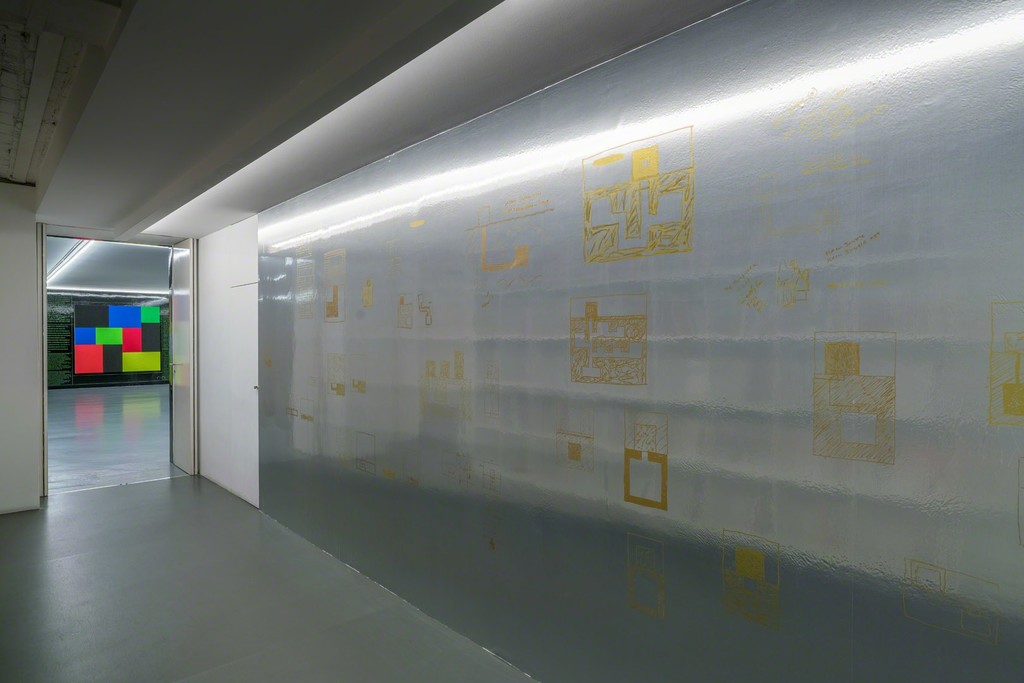 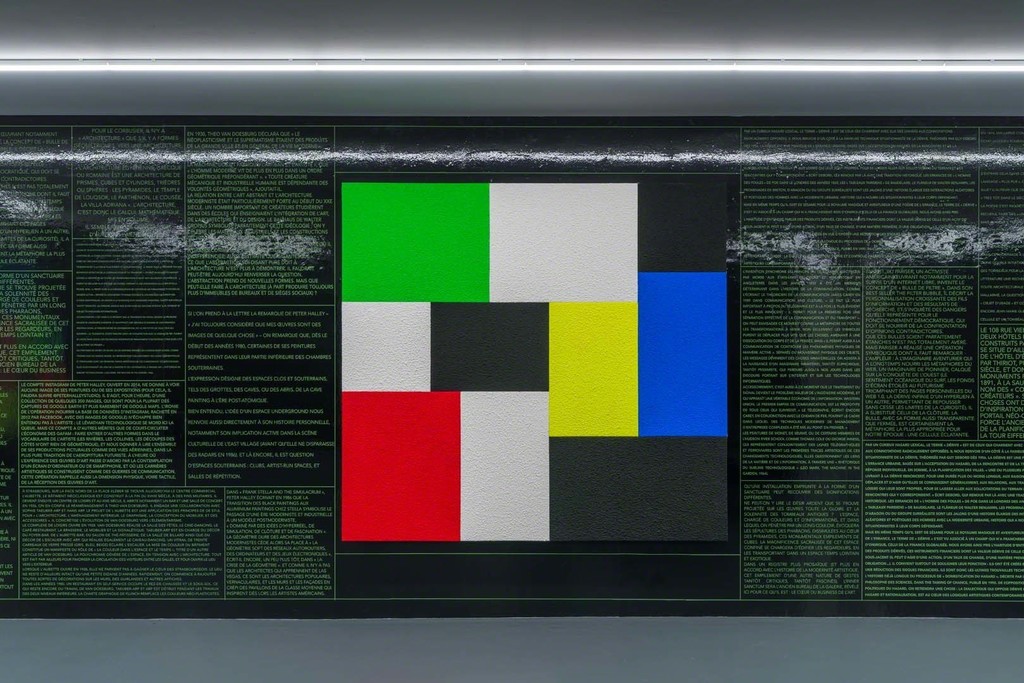 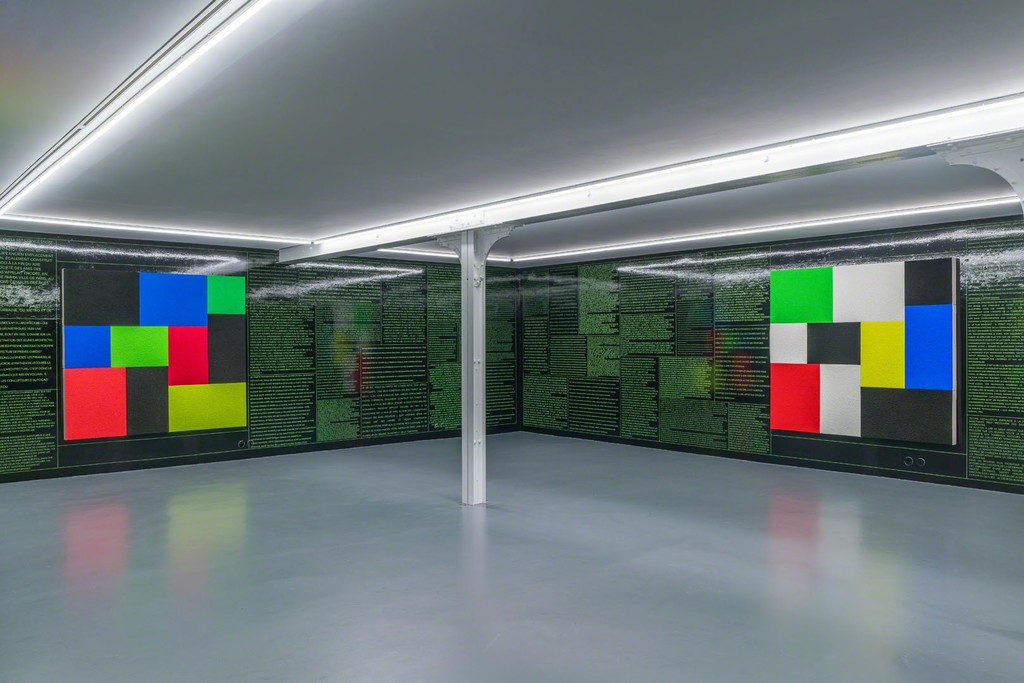 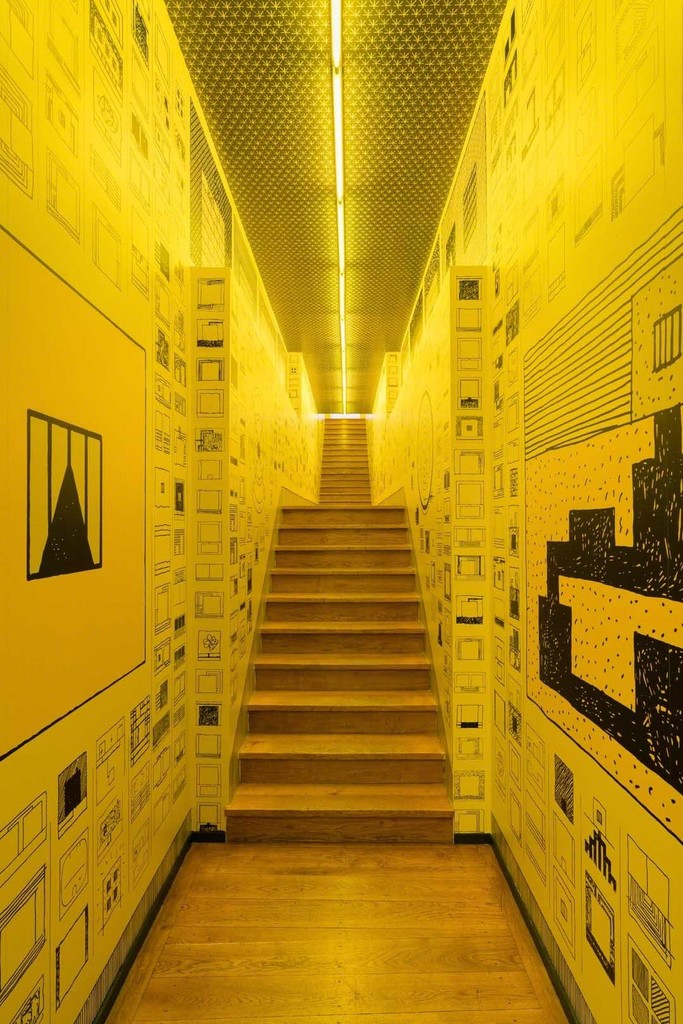 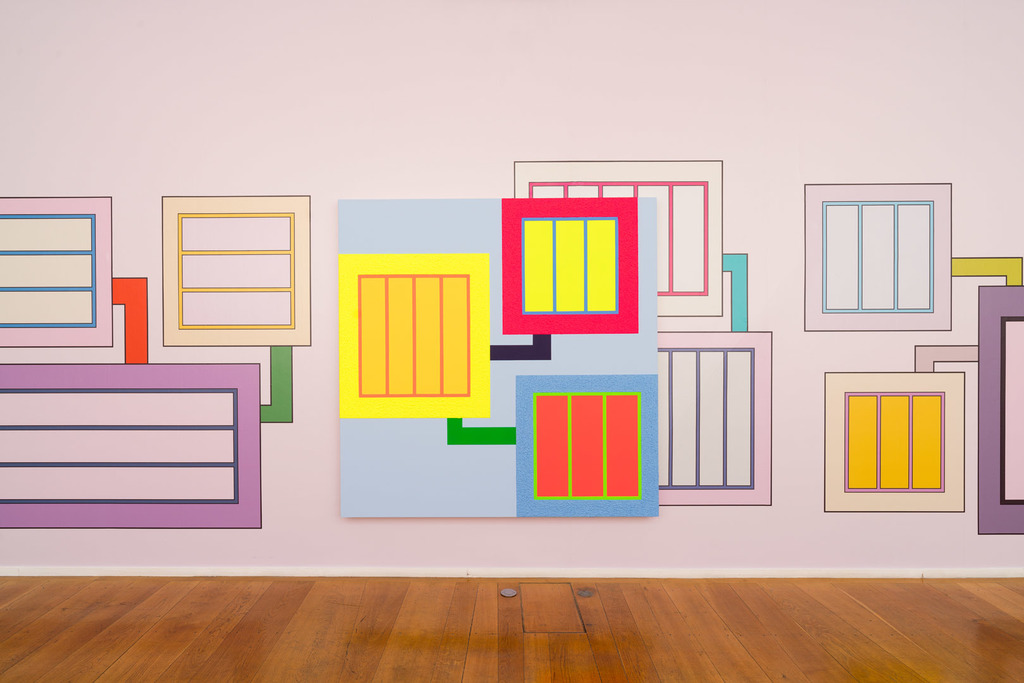 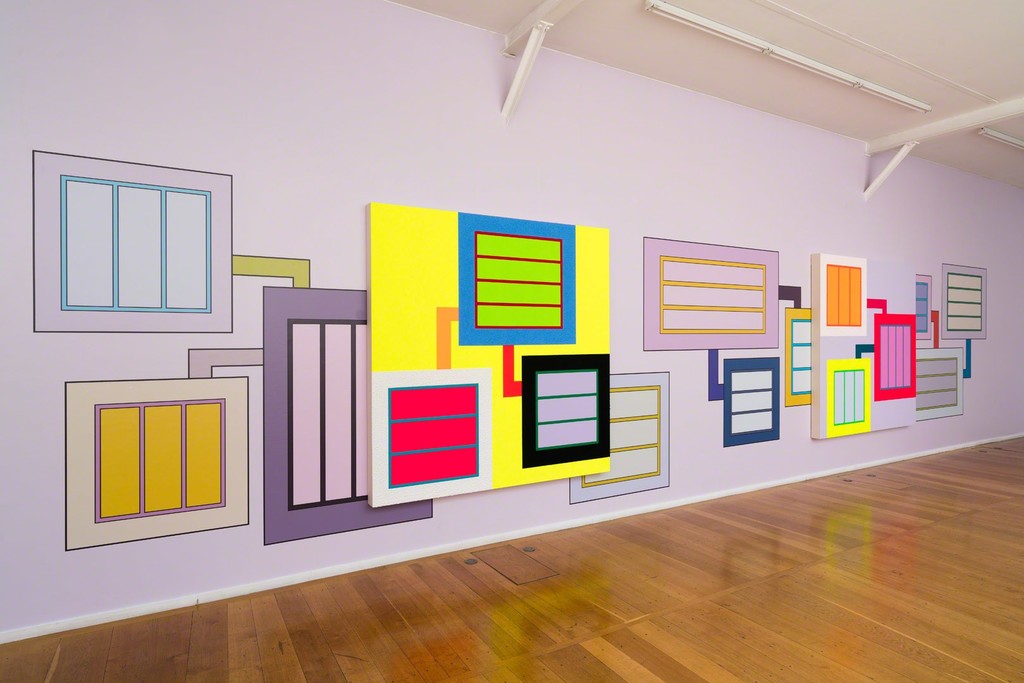 Peter Halley says of his paintings that they are images of something. He has found his role models in pop and minimalism, with Barnett Newman, Frank Stella and Andy Warhol, instead of the canonical – and European – history of abstraction, which he has been a fierce critic of ever since his first writings at the beginning of the 1980s. In this tension between abstract and figurative work, architecture occupies an important place. His practice of geometric abstraction is, indeed, inseparable from his take on the city of New York, where he grew up. In 1991, he described it as a “huge, very abstract, very overscale undifferentiated grid”[1], thereby casting the city as a matrix upon which to base his work.

Since the 1980s, the painter has integrated materials and motifs drawn from architecture into his pictorial lexicon. “Cells”, “prisons”, and “conduits”, found in his work from 1981 onwards, are therefore the product of a reflection on the geometricisation of the social space, inspired by the work of Michel Foucault, and especially Discipline and Punish. As he explained recently, Halley works at “ transforming the language of geometric abstraction into a vocabulary of prisons and isolated cells”[2]. As for Roll-A-Tex, a thickening texturising agent which he systematically uses, it is used in interior design for rendering. Incidentally, Peter Halley’s paintings often have an object dimension, akin to bas-reliefs.

This relationship to architecture is not limited to the format of the canvas. In the 1990s, Peter Halley broadened his painting practice by making installations. The paintings were hung on backgrounds (usually digital prints), whose motifs are drawings and diagrams drawn from his archives or sketchbooks. He also collaborated with designers such as Alessandro Mendini and Matali Crasset. In each case, it was a question of investing the entire exhibition space, in order to consider painting as an architecture, and together with architecture.

This new exhibition at the gallery is firmly in line with this thinking. The artist has created a complex installation which takes up the entire gallery space, from the first floor to the basement, and including the stairs, entrances and corridors. It is made up of paintings, wall-sized digital prints, and texts.

On the first floor, four paintings created specifically for the exhibition are hung on a printed background, producing a trompe-l’oeil effect where the paintings and the prints are in literal dialogue.

In the stairwell, the entrance, and the corridors, a set of printed drawings highlights the specific architectural features of the gallery, creating effects of thresholds and passages.

by neo-plasticism take up compositions already used by the artist, in a version stripped of its usual motifs. The text written by Jill Gasparina, and itself composed of self-contained blocks freely arranged on the wall, goes back over questions which the artist has been developing since the 1980s, in his paintings and his writings: urban planning, the growth of digital technology, the synthetic spaces of video-games and architectural renderings, the links between European and American traditions of abstraction, and between modernism and postmodernism. The space is thereby transformed into an immersive installation.

Whilst he has strongly criticised the formalist impasse of modernism, Peter Halley’s work continues to paint a picture of modern life, in its architectural and technological forms.

Peter Halley was born in 1953 in New York where he lives and works.

Since the mid-1990s, he has also produced installations, in situ artworks or public commissions: at the State University of New York, Buffalo (1998), at the Bibliothèque Municipale d’Usera, Spain (2002), in the collection of the Banco Suisso d’Italia, Turin (2003), at the international airport of Dallas/ Fort Worth in Texas (2005), at Palazzo Bembo, Venise (2011), to name few. In 2008, he has created a permanent installation at the Gallatin School of the New York University.