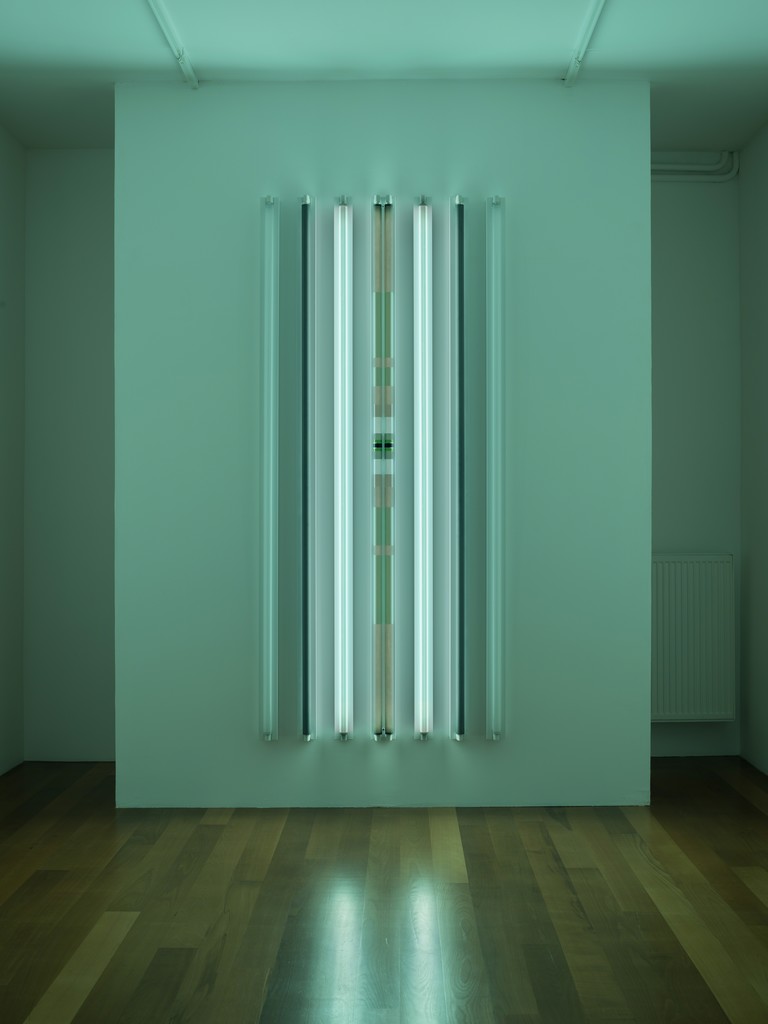 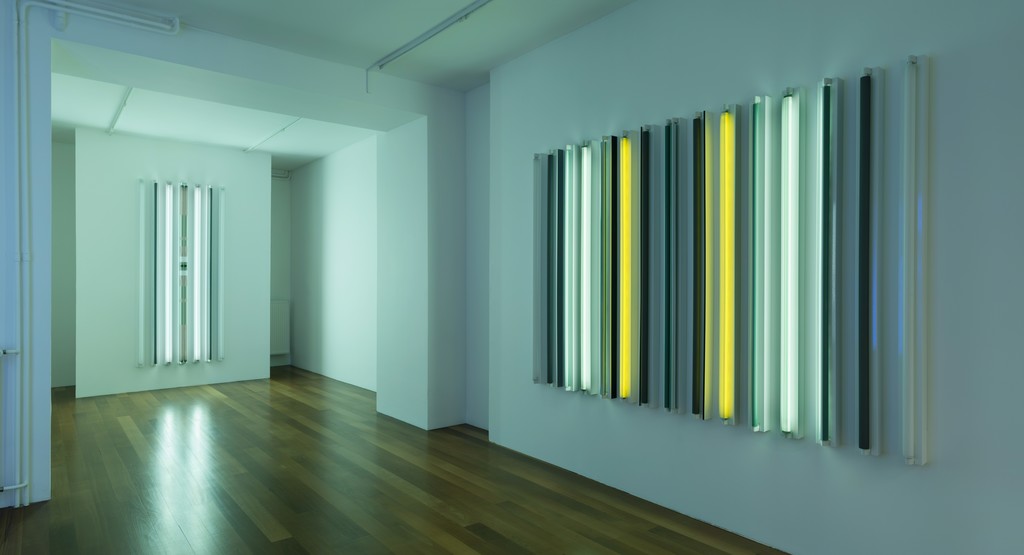 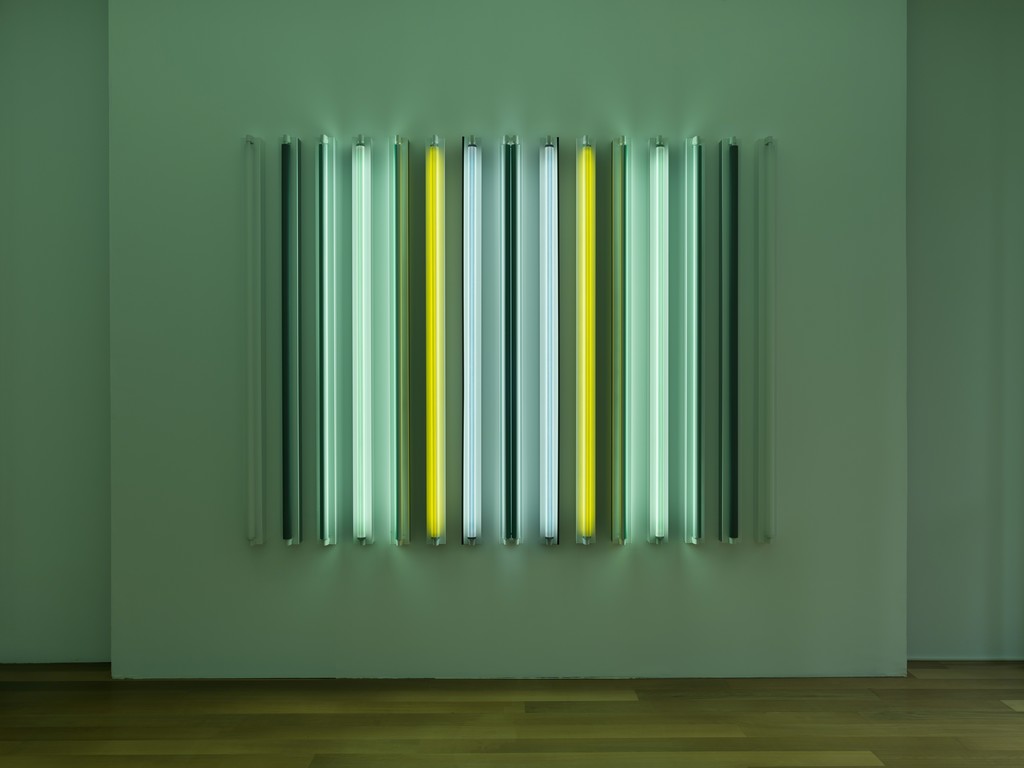 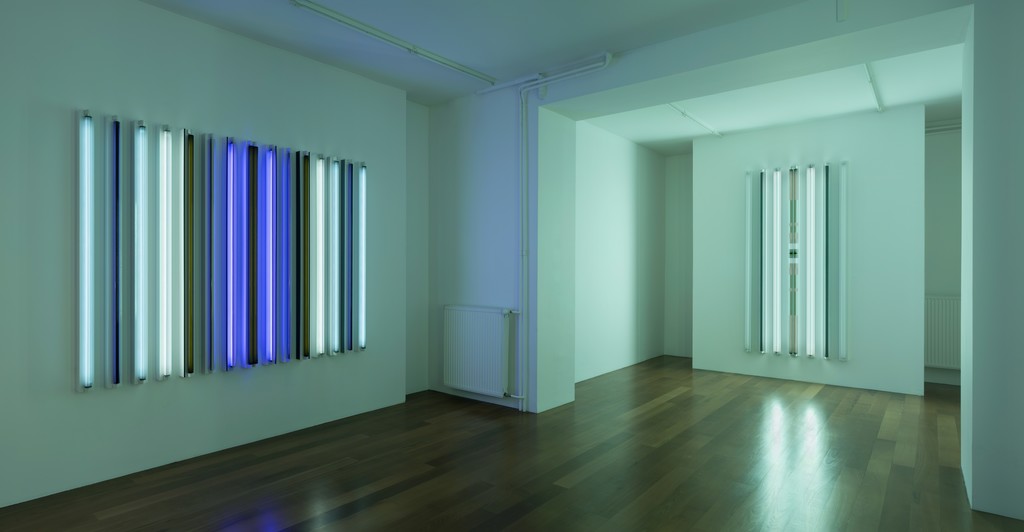 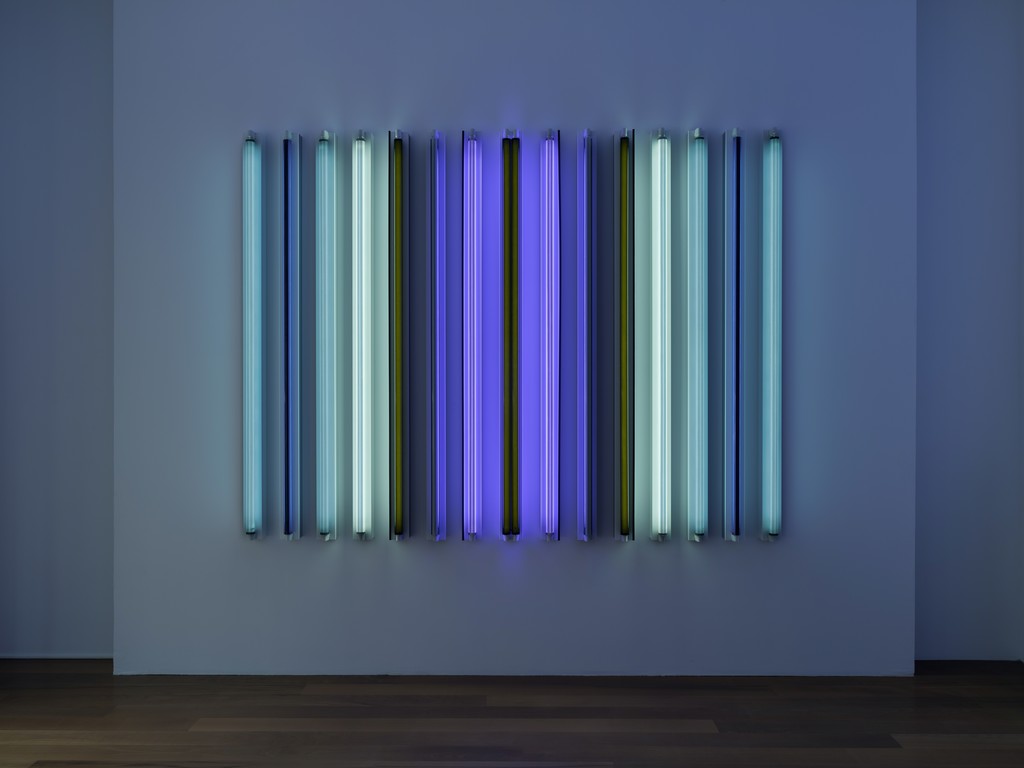 The Xippas Gallery is very pleased to present the first gallery solo show in Switzerland of Robert Irwin’s work. Irwin, who is a pivotal figure in the Los Angeles art scene for the last five decades and founding member of the “Light and Space” movement, is also one of the most influential artists of the 20th century.

Three light works will be presented, all imagined with the gallery in mind. This recent work of a fascinating beauty explores the interplay between light and color, and reminds us of the painter he was in the beginning of his career. More to the point, Irwin manipulates the way that color emitted from fluorescent tube lights shines and disseminates through space by playing with the chromatic rhythms as well as the syncopated oscillation of color hues, of temperatures and light densities. The intense presence of the Robert Irwin’s works cannot be grasped through the observation of their light devices alone, but instead through an awareness of the space that his color phenomena inhabit and the harmony they establish with time and natural light.

These light installations are unique in that they don’t dazzle the spectator by exploiting elements of the spectacle, but instead they open his eyes to a certain sensibility and perception. In doing so, the installations allow for as many readings of a work as there are ways of looking at it. Robert Irwin’s art is constantly in dialogue with the mind of the spectator – a consciousness of the world, free from all prejudices, which has been broadened by life experiences and a sense of perception that gives equal status to feelings and intellect, to beauty and truth.

The works by Roberts Irwin are in the permanent collections of the most important museums. Numerous institutions have shown his work: the Dia:Beacon, New York this year, the Whitney Museum of America Art, New York in 1977 and 2013, the San Diego Contemporary Art Museum in 2008, the Dia:Chelsea, New York in 1999, the MoCA of Los Angeles in 1993, the San Francisco MoMA in 1985, the MoMA, New York in 1970, ... He produced the installation for the United States Pavilion at the Venice Biennale in 1976.

Robert Irwin will be present for the exhibition’s opening, which will take place September 17, 2015, starting at 6 p.m. This same day, the Xippas Gallery of Geneva will celebrate its grand opening in Switzerland, 4 years to the day. “Seeing is Forgetting the Name of the Thing One Sees” is the title of the fascinating interview with Lawrence Weschler in 1982, (reedited by Expended Editions in 2008), which is a virtual cross-section of Robert Irwin’s entire career and a book that heavily influenced an entire generation of young artists.

Robert Irwin’s life work, spanning fifty year of creation, can be seen as a progressive dismantling, starting with art dogmas and moving to the material form itself. He accomplishes this dismantling through a diligent interrogation – unforgiving and uncompromising – of any conception regarding the spectacle. Between 1954 and 1968, Irwin is given his start by the infamous Ferrus Gallery and is one of the most important painters of the young West Coast art scene. His work continuously evolves from a language of gestures and colored born out of abstract expressionism, towards the meticulous painting style seen in the 1964-66 series dots paintings. Here, the minute green and red dots on the entire surface impregnate the white canvas with a hypnotic aura, pulling the spectator’s perception in the realm of the experimental. The artwork Untitled (disc), 1967-69, marks a turning point in his work: the acrylic plastic discs and the shadows they cast on the wall are the exact same shade, blurring shadows with the forms themselves. Through this fleeting optical illusion, Irwin manages not only to abolish the limits of a canvas, but also to push the public’s understanding of the art object and its appearance, and above all the notion that the appearance itself can be considered as an art object. In 1970, he produces the Column, a vertical sculpture in transparent acrylic, invisible except in its reflection of the things around it.

In the framework of the 1968-1971 research program in art and technology conducted by the LACMA (Los Angeles County Museum of Arts), Irwin works with Dr. Edward Wortz, head of the laboratory of a space program, and invites a young artist named James Turell to join their research team. It was at this time that Irwin decides to stop working in a studio. He abandons all his works, his entire collection, and all his artistic materials, for an extended stay in the Mojave Desert where he can feel space without limits. His experiences lead him to conceive of a project in situ, that he calls “conditional art,” where the work is determined by the particular circumstances of their precise location. With One wall removed, 1980, Irwin replaces the outside wall of the Malinda Wyatt Gallery with an extensible, sheer screen in a delicate white canvas to reveal the infinite light variations cast two skylights in empty space.

During the last two decades, the works of Robert Irwin have been expanding into projects of considerable scale. In a broad sense, these works grapple with the artist’s role in society. Irwin imagines and produces gardens, such as the famous ones at Getty Museum, in Los Angeles, and the “Palm Garden” at LACMA. In addition, he converts architectural spaces, like that of the DIA Beacon in New York, and he has made plans to harness public spaces, such as the Miami International Airport.
A great theoretician, his work is inseparable from his brilliant reading of art history and modernity: according to him, we haven’t yet dealt with the fundamental questions raised by modernity. His theses are imbued with philosophy, and with a strain of phenomenology in particular that, from Husserl to Merleau-Ponty, doesn’t disassociate thought from perception and easily frees itself from presumptions and foregone conclusions in order to reexamine questions of art, science and history. The Musée d’art contemporain in Lyon published a book of his writings on aesthetics (éditions Skira). Also, Irwin has remained much involved in teaching at such school as Chouinard, UCLA, and UC Irvin. Amongst his past students are such prestigious figures as Chris Burden, Maria Nordman, Vija Celmins, and Ed Ruscha, just to name a few. Robert Irwin’s well-articulated lectures bespeak his breathtaking clarity and his listeners, led by this language without artifice, open their eyes and are allowed to see into the very core of artistic expression.