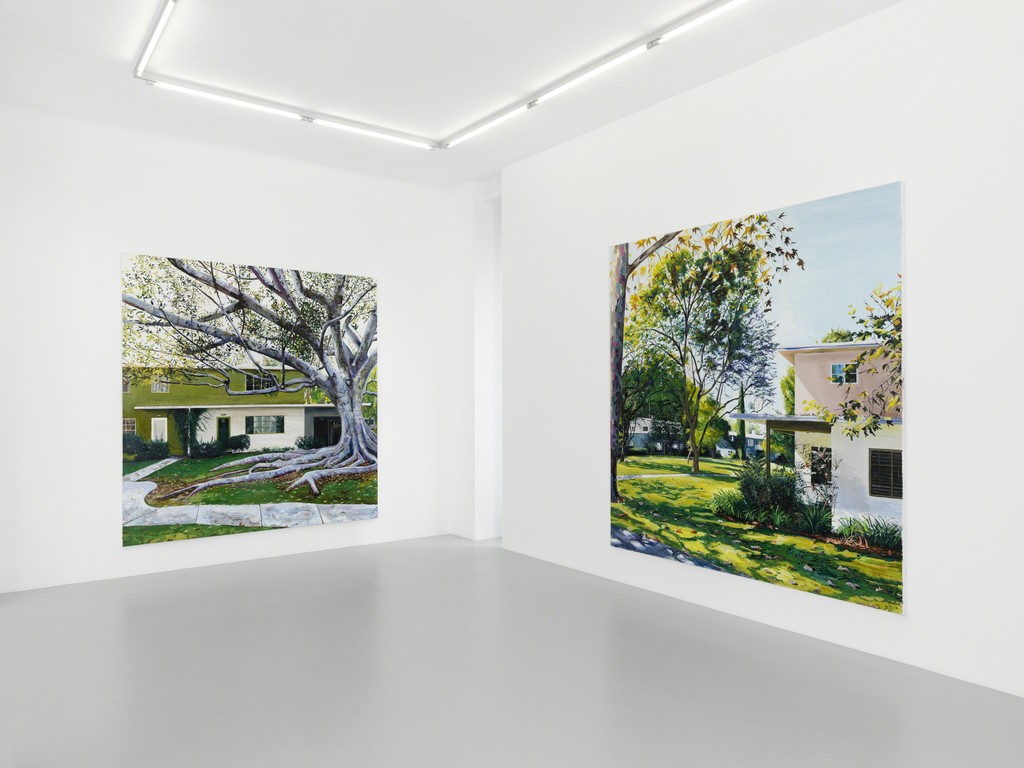 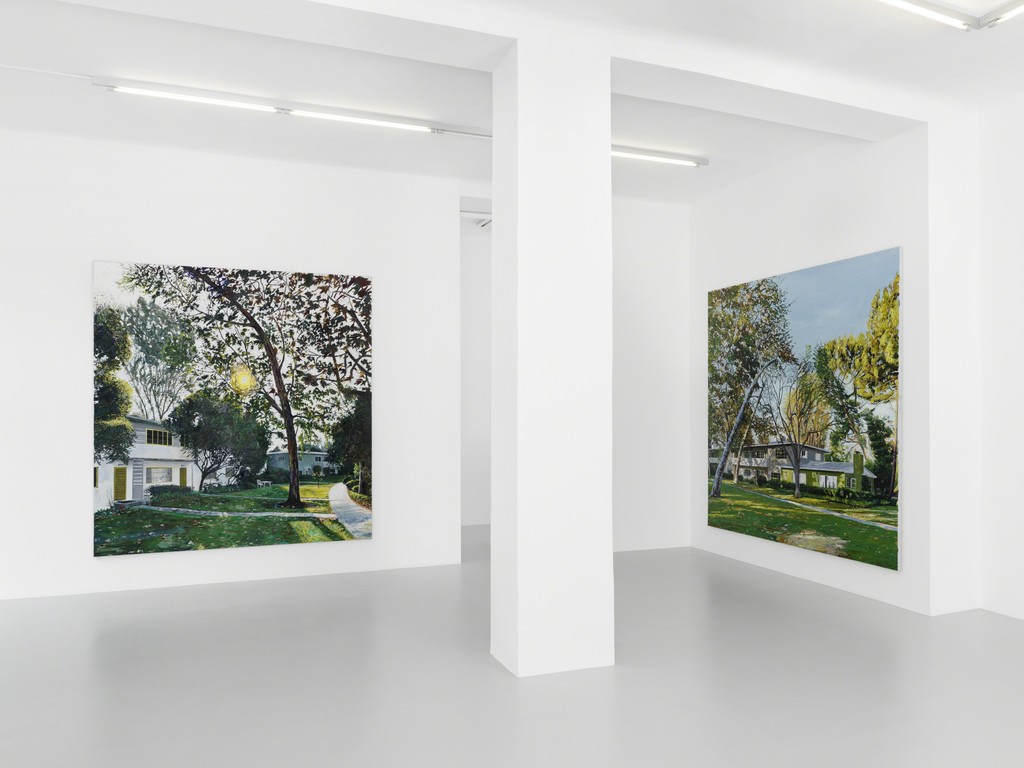 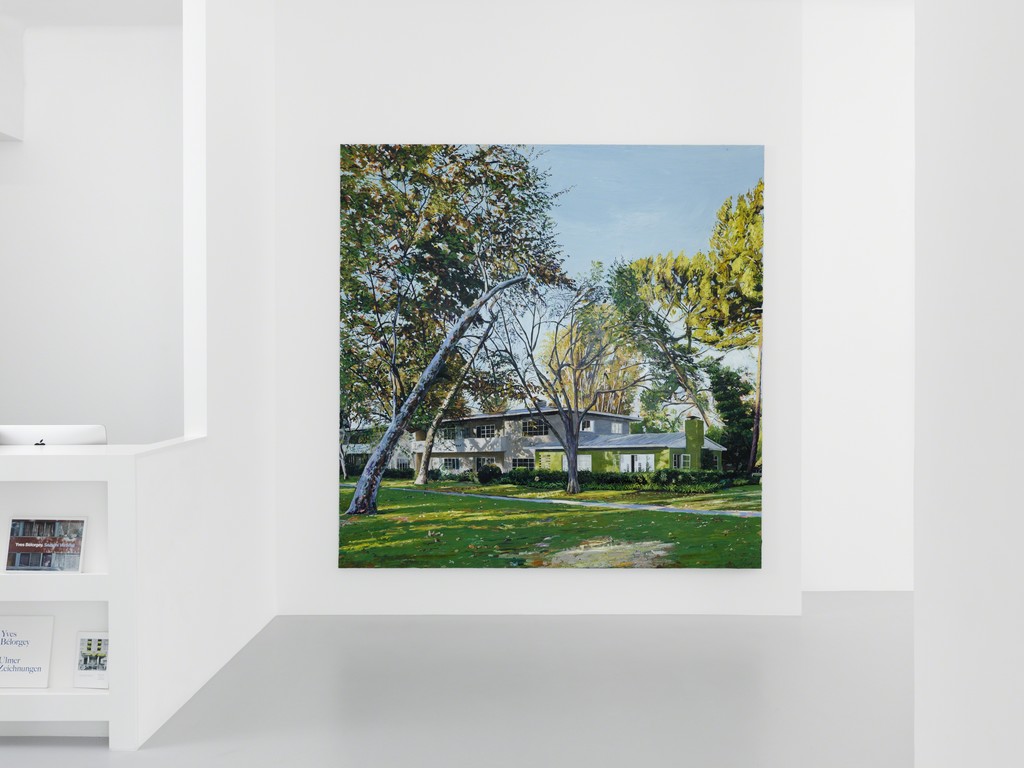 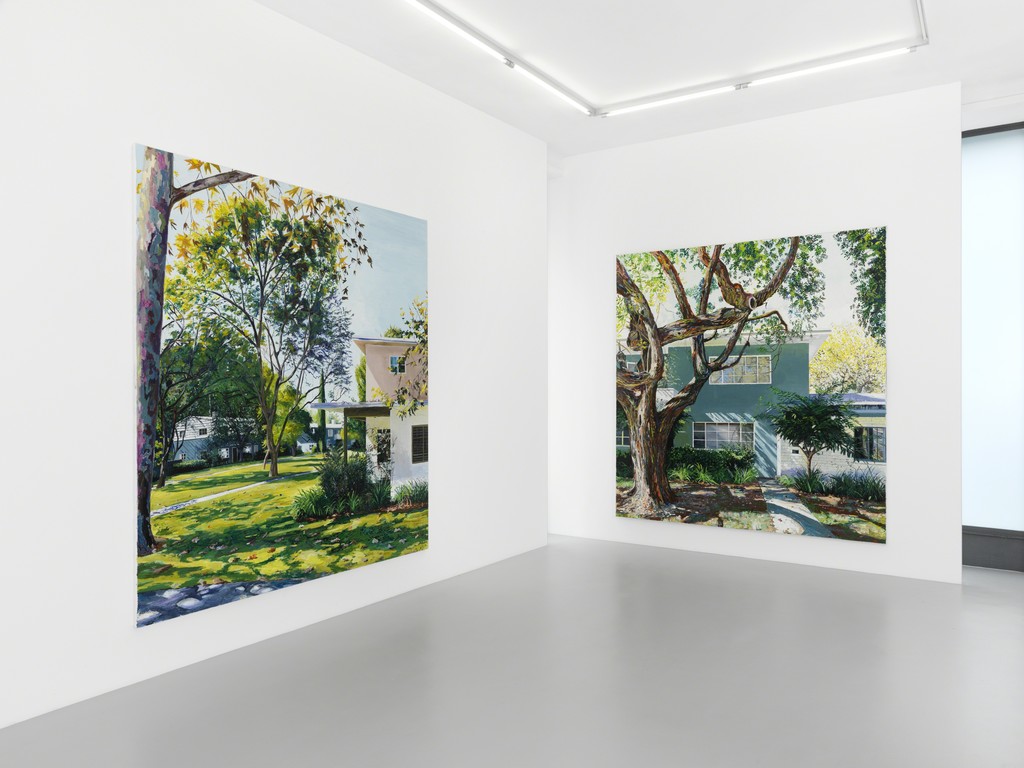 The Xippas Gallery is delighted to present an exhibition by the French painter Yves Bélorgey. At this occasion, the artist reveals for the first time a new series of paintings dedicated to architectural private co-properties, the Baldwin Hills Village, in the United States.
Since the 1990s, Yves Bélorgey has focused on modern architecture by mapping urban and outer-urban landscapes. His paintings and drawings create a rich and multifaceted work that, subjectively, form a set of archives of our modern architectural heritage. With this new series, Yves Bélorgey moves away from his comfort zone, cities and building façades, and towards a garden city in the suburbs of Los Angeles.
Under the blazing sun of the American west coast, under the shade of the huge trees, an ensemble of colored villas emerges. Located at the foot of Baldwin Hills, southwest of Los Angeles, the Baldwin Hills Village, now called the Green Village, was considered as a successful exemplary residential unit when built in 1942. Little houses are arranged around a opened landscpaed area (The Green Village). Each home has its own garden courtyard that separates it from the common green space. The parking and the garages are situated behind the homes, towards the site’s perimeter. The clubhouse and offices are in the center. This project was conceived by a team of architects, town planners and designers including ; Reginald D. Johnson, Lewis E. Wilson, Edwin E. Merrill, Robert E. Alexander, Clarence S. Stein, and town planner Fred Barlow, Jr.
With this new series, Yves Bélorgey expands his field of study. The usual subject of his work changes, the buildings are no longer in the first plane, as he chooses to bring light to the importance of the environment that surrounds them. By doing so, nature reveals itself: the trees, the alleys and the gardens find themselves in the foreground of painting. And if, as usual, Yves Bélorgey doesn't paint the human figure, he explains that the figure in his paintings is the viewer. Therefore, the painting functions as a fiction where the viewer is the main character. A visit to the exhibition takes the shape of a walk through the alleys of Green Village.

Yves Bélorgey was born in 1960. He lives and works in Montreuil, France. It was in 1993, during an art residency in Marseille, that he began his first architectural paintings. His artworks are represented today in numerous institutional collections. In 2012, the Musée Régional d'Art Contemporain Languedoc-Roussillon in France and the Kunstlerhaus d'Ulm in Germany dedicated a personnal exhibition to him. The same year, the Mamco in Geneva, organized his first retrospective exhibition including nearly a hundred artworks. In 2013, he dedicated a set of works to the Quartier des Avanchets where he painted interiors. These works were exposed at the Maison du Quartier des Avanchets (Geneva) for an exhibition titled Intérieurs aux Avanchets. In 2015, he also presented his work at the Cité de l'architecture et du Patrimoine on the occasion of the exhibition Tout est paysage, une architecture habitée by Simon and Lucien Kroll.