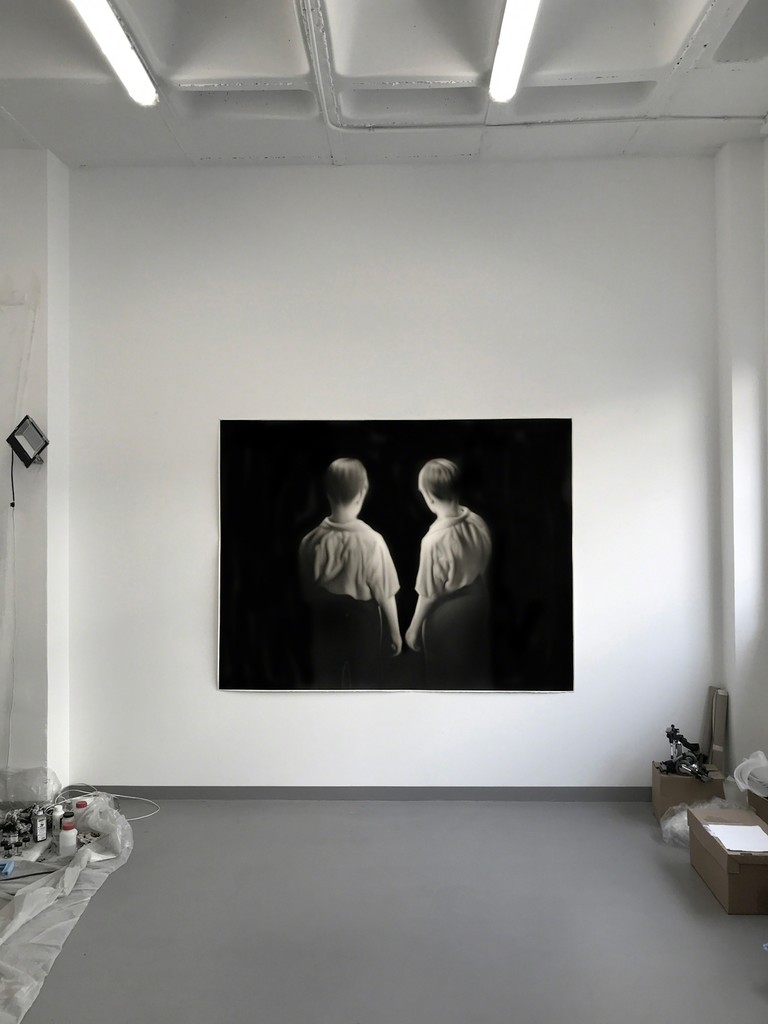 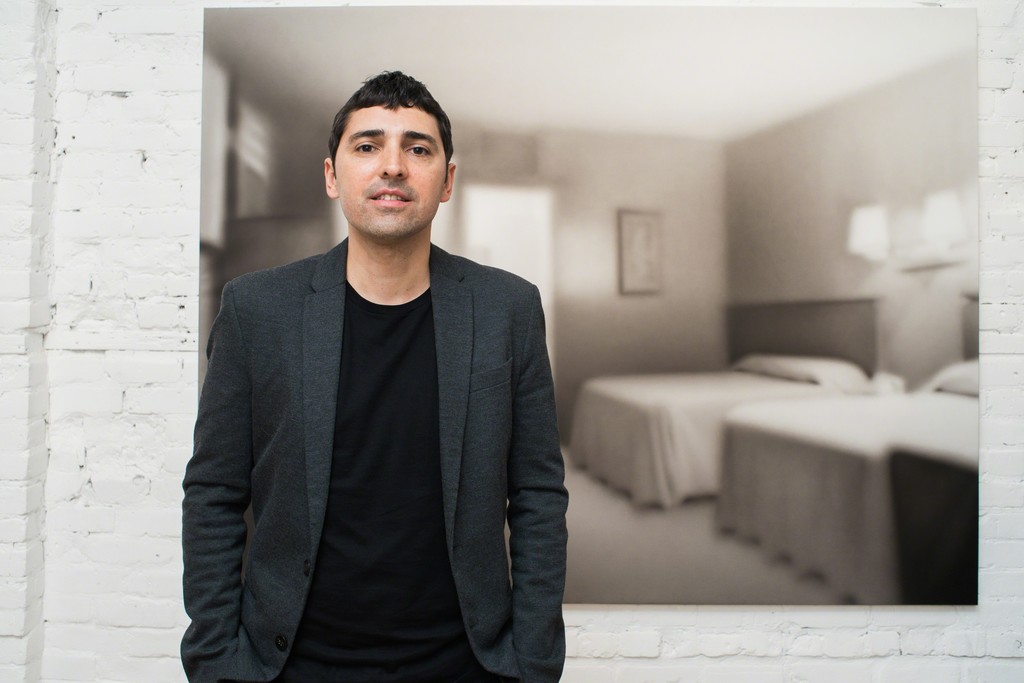 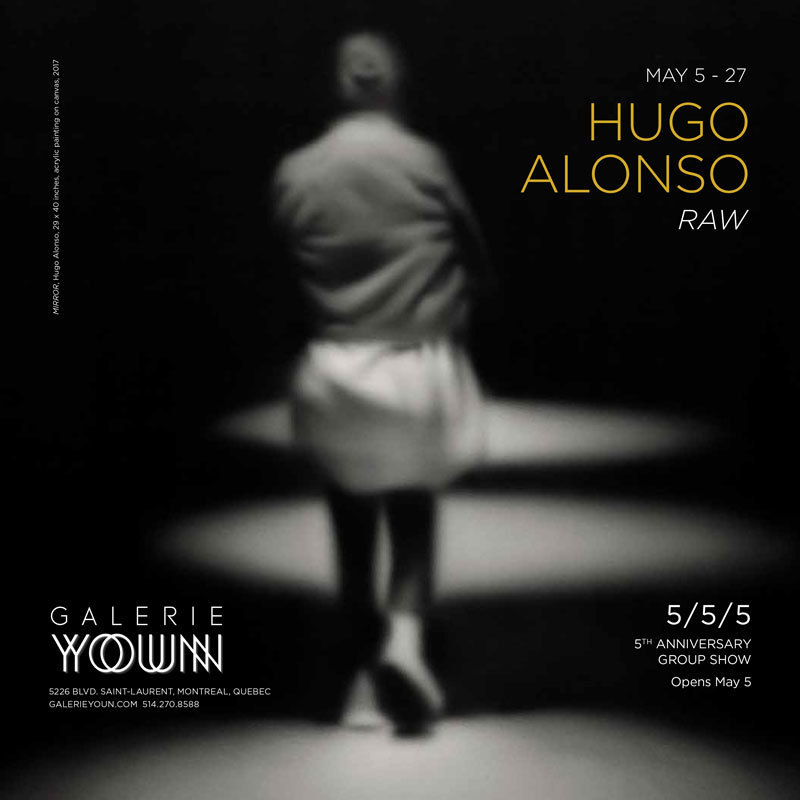 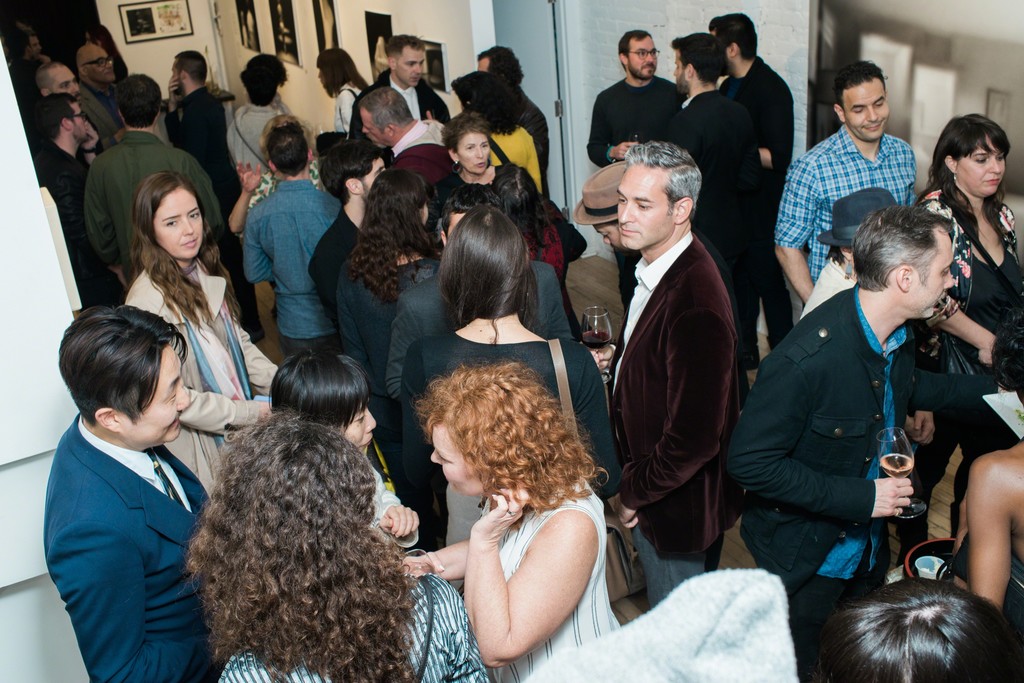 During reception of Hugo Alonso past May 2017 at Galerie Youn 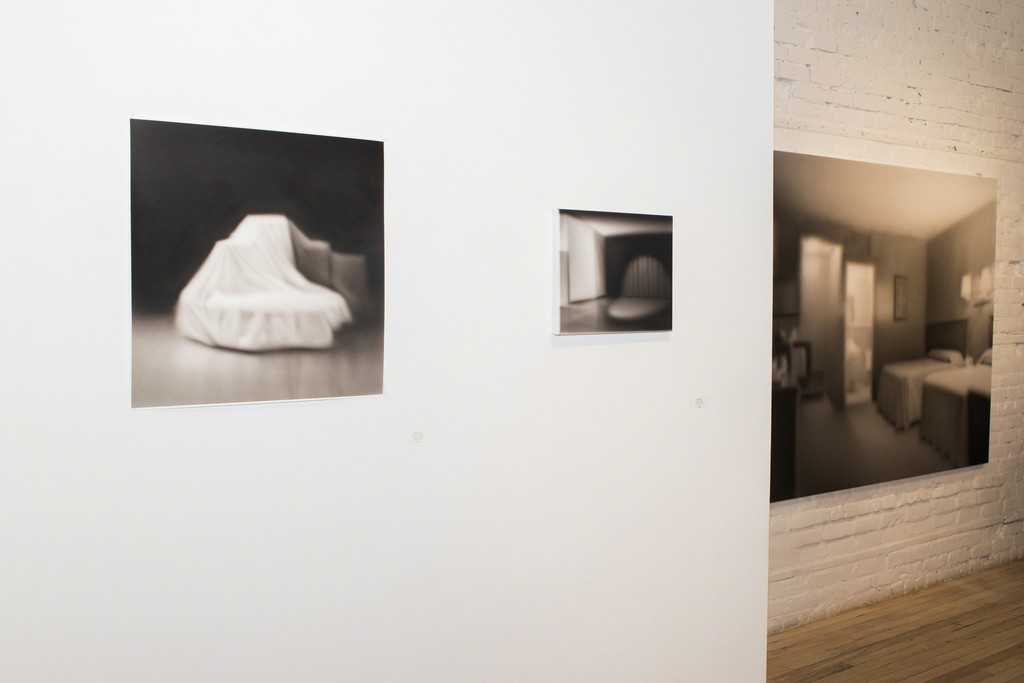 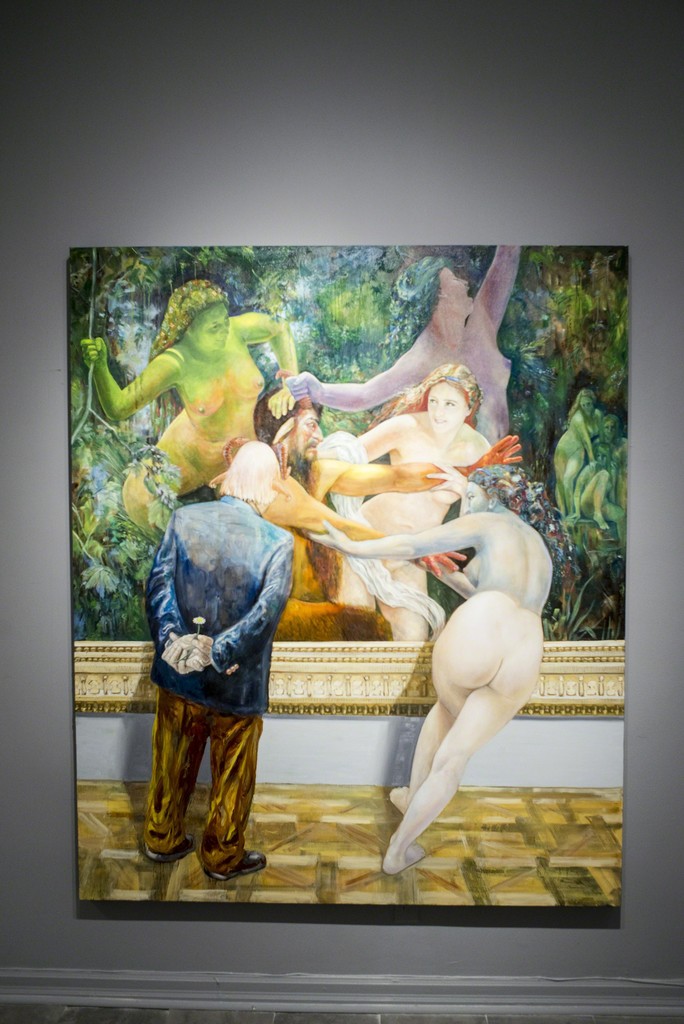 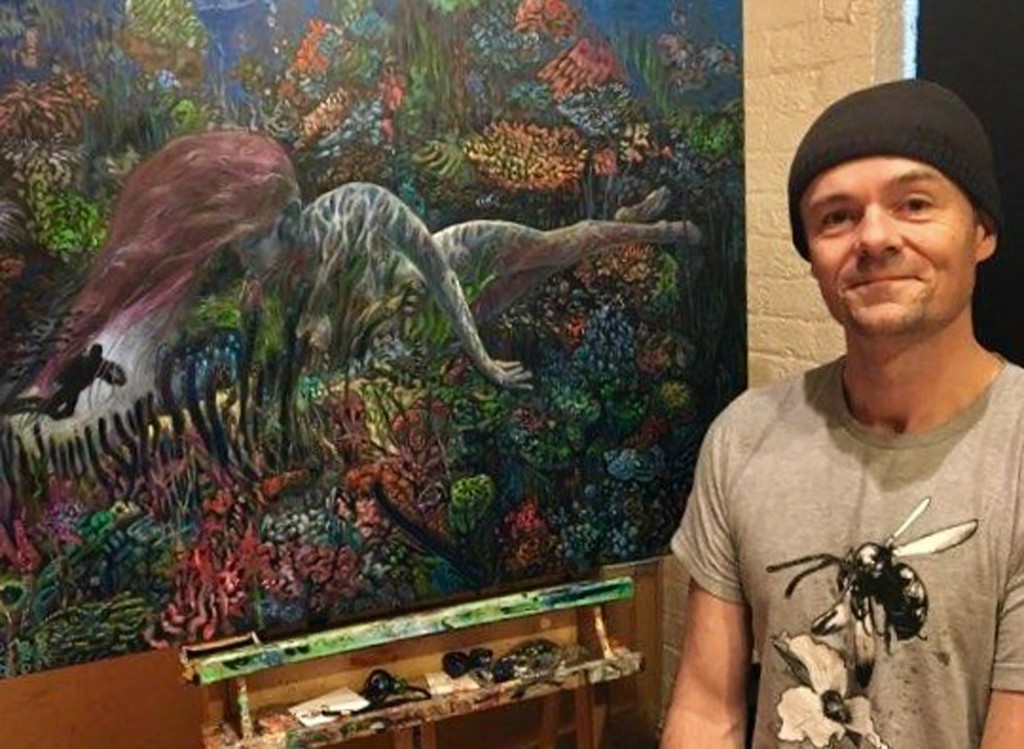 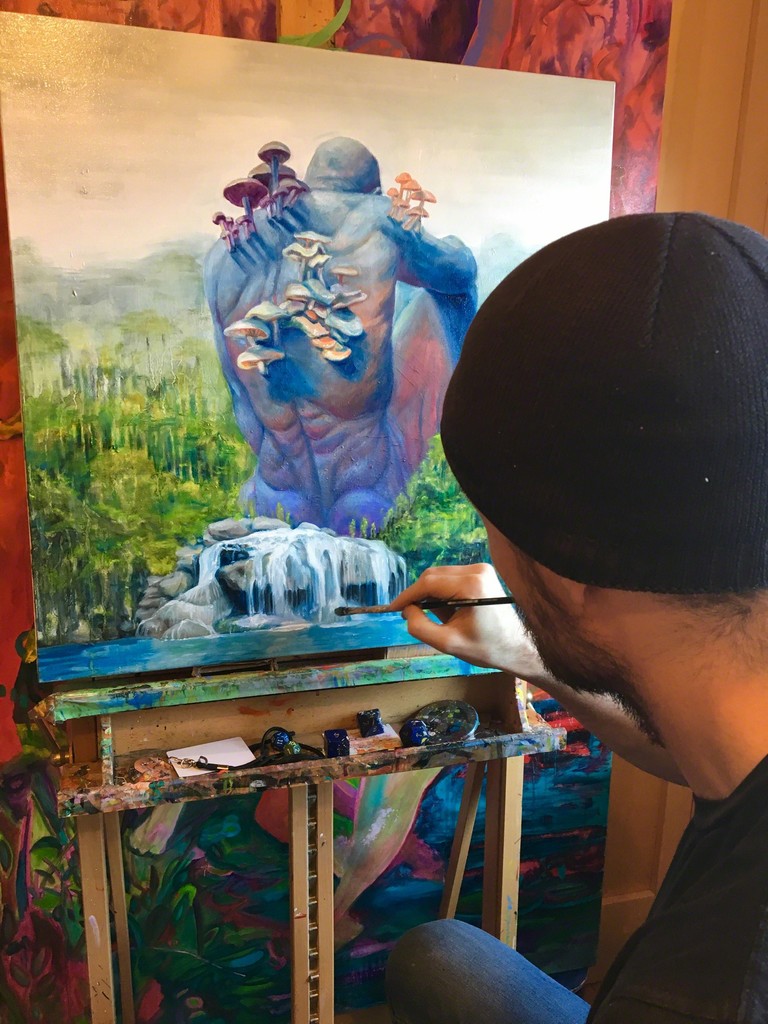 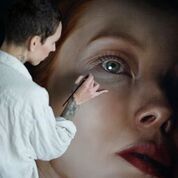 Artist Kit King at her studio 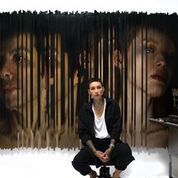 Artist Kit King at her studio

From very early on Hugo Alonso has been interested in how to approach the pictorical image, sounding out its possibilities through the digital path. He has used sound and moving image, particularly the sensations close to horror movies and science fiction in order to act with the coldness of a surgeon in order to generate images that have a dialogue among mediums from a pictorical base that is independent of the support and of the tool or discipline called up to work at each moment. In this he generates an intermediate reality, between everyday reality and film reality, between the lived and that which we can still recall.
In his latest work he presents a series of delicate acrylic drawings on paper that might become paradigmatic; veiled images that come from movies and owe their names to female leads from suspense films, in this case, Laura, Sally, Regan, Norma, Kristen and Laurie. They formally fit into the interest that many contemporary artists have for the vague, and which journey towards the destruction of the image, blurring our view as spectators through a series of fuzzy framings. Memory and its difficulty of apprehension justify this reduction of the range, and time seems to remain suspended, as if we hushed the scene and stopped the development of the action. It is a matter of working on the uncertain, on the disturbing. As if the strangeness functioned as a misty curtain capable of erasing the outlines in order to turn the image into a whisper.
Hugo Alonso works on the decoding of images using fragments ‘also of sound’ from classic horror movies in order to in a certain manner expand the painting into a resonance. Like in many contemporary artists, in Hugo Alonso the canvas is not empty to start out with, and painting is not used to produce the image, but rather it is the image that is used to produce the painting. In this sense we could extrapolate the words of Gerhard Richter about photography in order to set the relationship that Hugo Alonso has in relation to the cinema: “when I paint from a photograph conscious thought is suppressed. I don’t know what I am doing. My work is closer to the informal than to any type of realism. Photography has an abstraction of its own that is not easy to penetrate”. This semantic ambiguity projects a problem for the gaze, between the desire to see and the difficulty of discerning what is told to us and the outcome.
Alonso lets us be seduced by the uncertain, in his own words, by a “hole behind a painting that one can approach so as to peer at that which seems far off to us in a strange manner, with a disturbing familiarity”. Hugo Alonso does not just work on deconstructing the processes of accessing painting but also the logic of the cinema and its elements ‘setting, plan, set dressing’ which he reorganizes in order to show new links to fiction, to a certain extent calling up the phantasmagorical.

Kit King (Canadian) King creates intimate hyperrealistic contemporary portraits that undress the cultural layers determining worth and shaping identity within the social stratum. The subjects in King's work serve to shift the status quo and challenge norms, while deconstructing the preconceptions of the many roles within cultural levels.
Often working in large scale, King’s works envelop the viewer, begging them to confront the subject as they become part of the narrative.
Her innovative use of traditional materials pushes boundaries—often with a destructive nature that emulates the destructive nature of man. With the need to create, beckons the need to destroy, as we see in King's most recent works of fully rendered paintings that have been cut up into pieces, deconstructed, and reassembled.

Jonathan Savoie (Tokyo, Japan based) who use sense of humour and ironies. In his recent series focuses on route 66 of U.S finding twisted humour and sexual jokes. West-East, East-West -
In 2013, Savoie decided to leave Tokyo for a while and return to Los Angeles. From there, he decided to take a journey he wanted to take, but had never had the chance. Savoie took the car and left L.A with a plan to drive to the Atlantic Ocean and back, while he worked on a photo record of America at that time.

Below the surface and the veneer of freedom and wealth and the American dream is the reality of environmental pollution, loss of resources, genocide, the influence of the military-industrial complex, waste, poverty, the un-sustainability of mass tourism, despair, and the ever-present threat of nuclear annihilation.

The project was made using a medium-format digital camera for all composed photographs and a 35-mm rangefinder camera for all snapshots using existing light. Both formats were then transferred to 4 X 5 sheet film, and then the final images were hand-printed following the traditional method, so that each print is one-of-a-kind.

Mark Liam-Smith (Toronto, Canadian) One Giant Leap, features a race of giants who personify elements, physical forces, and ecosystems in nature (such as fire, frost, jungle, smoke, desert, water, and air) and who interact with humans and human civilization. The elemental giants serve as metaphors for the natural world. Smith have anthropomorphized these elements, physical forces, and ecosystems and made them emotive in posture so that they are more relatable conceptually than inanimate notions about climate. Each painting displays a narrative not unlike a parable; they are meant to provoke thought about how humanity deals with the impending implications of a threatened environmental equilibrium.

This series serves a dual purpose: on one hand, the work fulfils the familiar function of much two-dimensional artwork in that it is an object for aesthetic consumption; on the other hand, the work provokes contemplation and discussion regarding environmental concerns in the broader cultural context of our everyday lives. There can be no greater cultural concern than the persistent degradation of the environment and its subsequent inevitable and emergent adverse effects on the quality of human life. Bringing these concerns to the fore epitomizes the crux of art, nature, and politics.