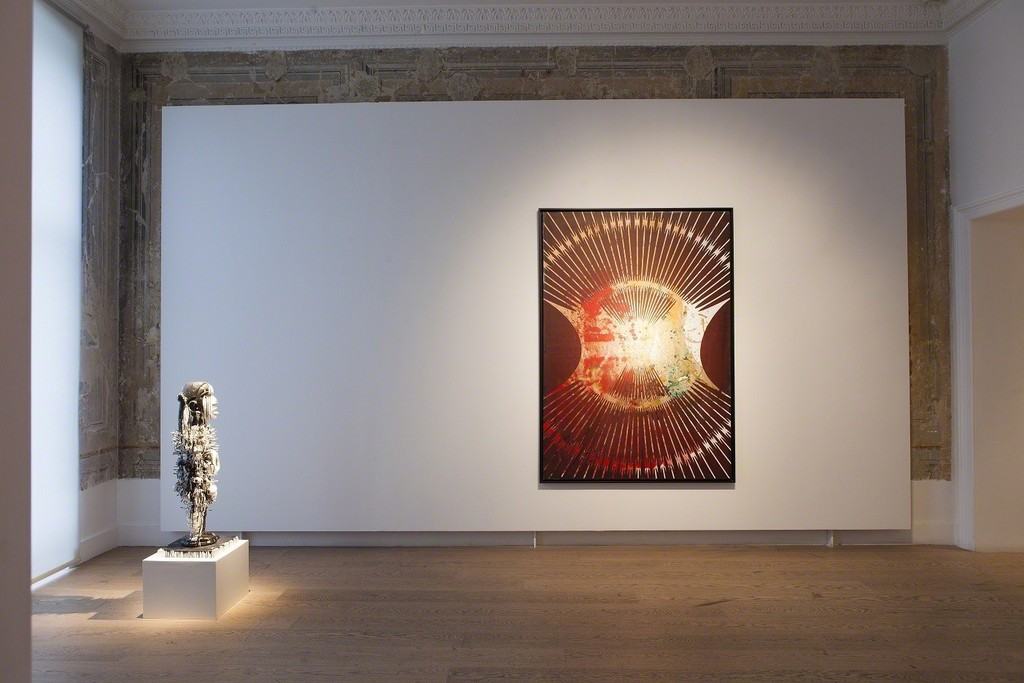 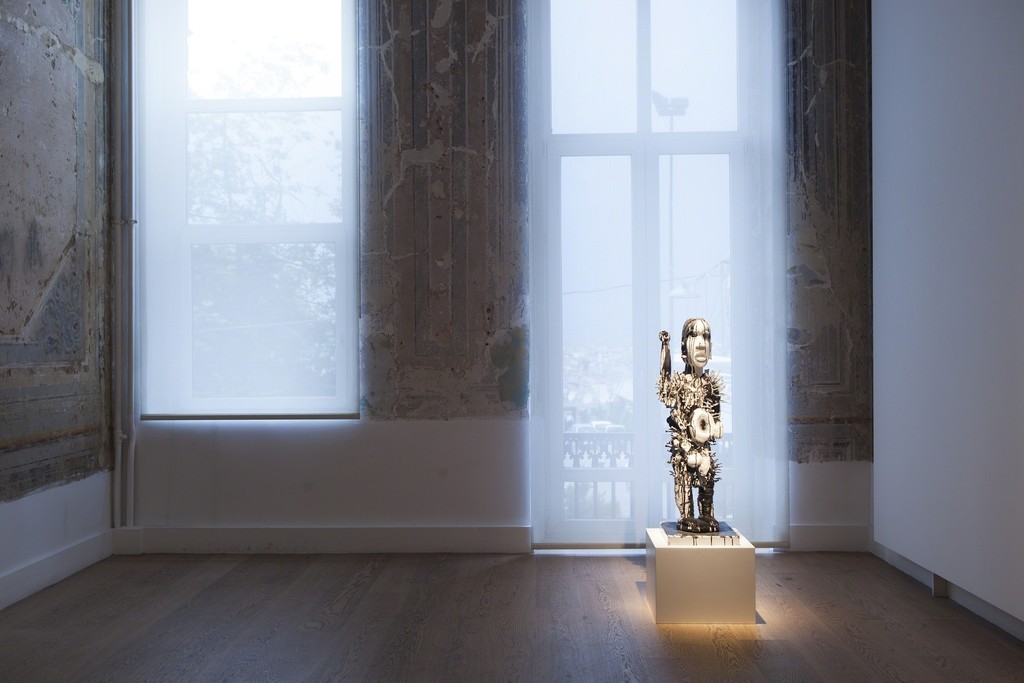 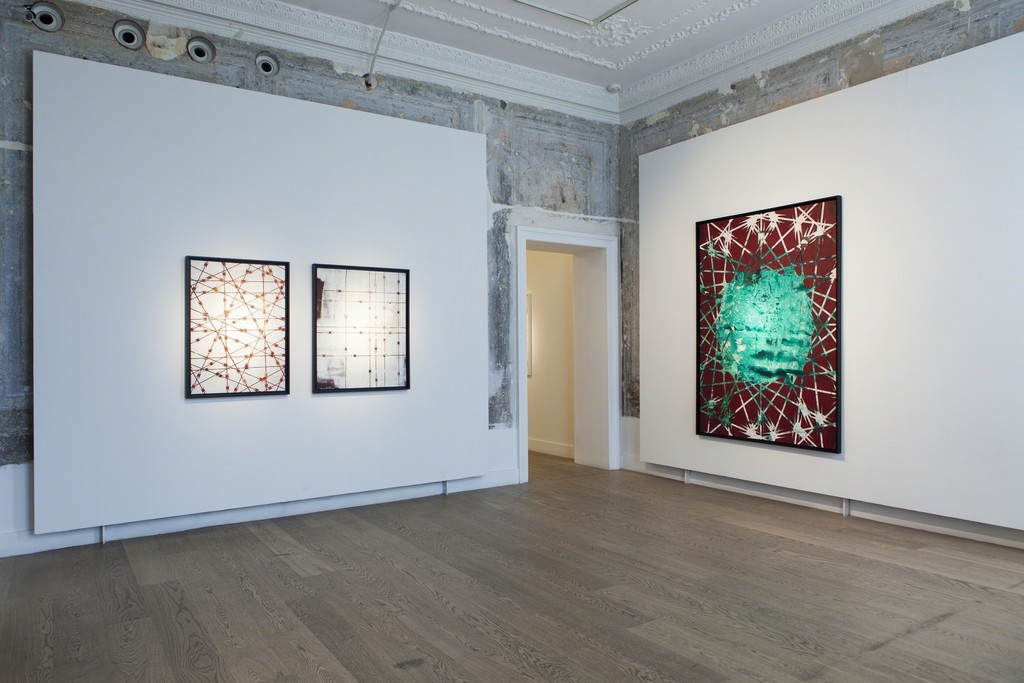 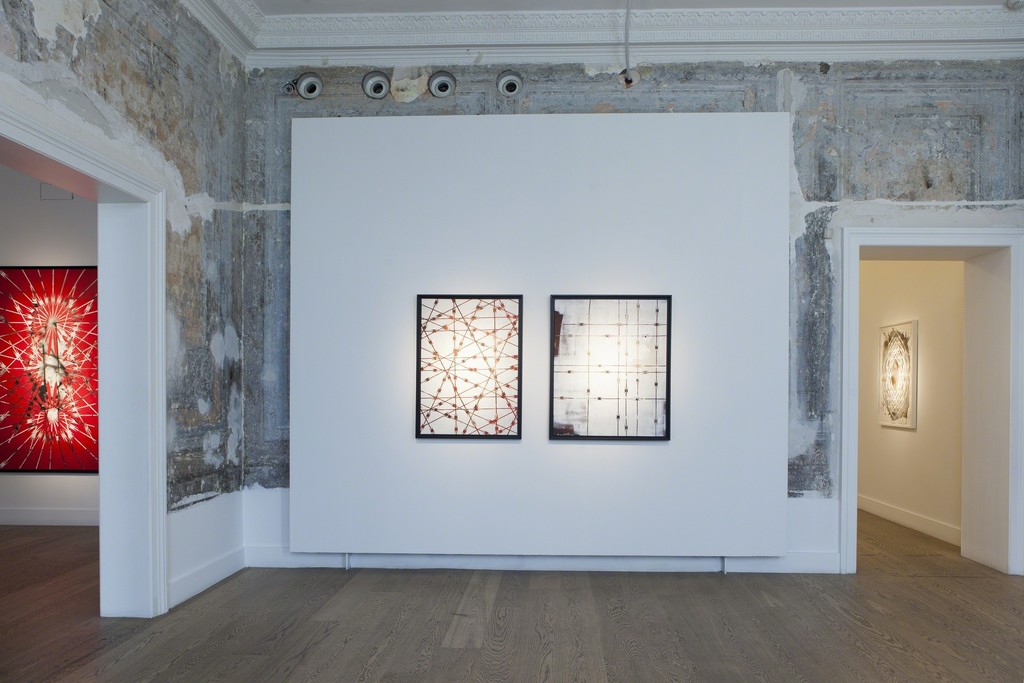 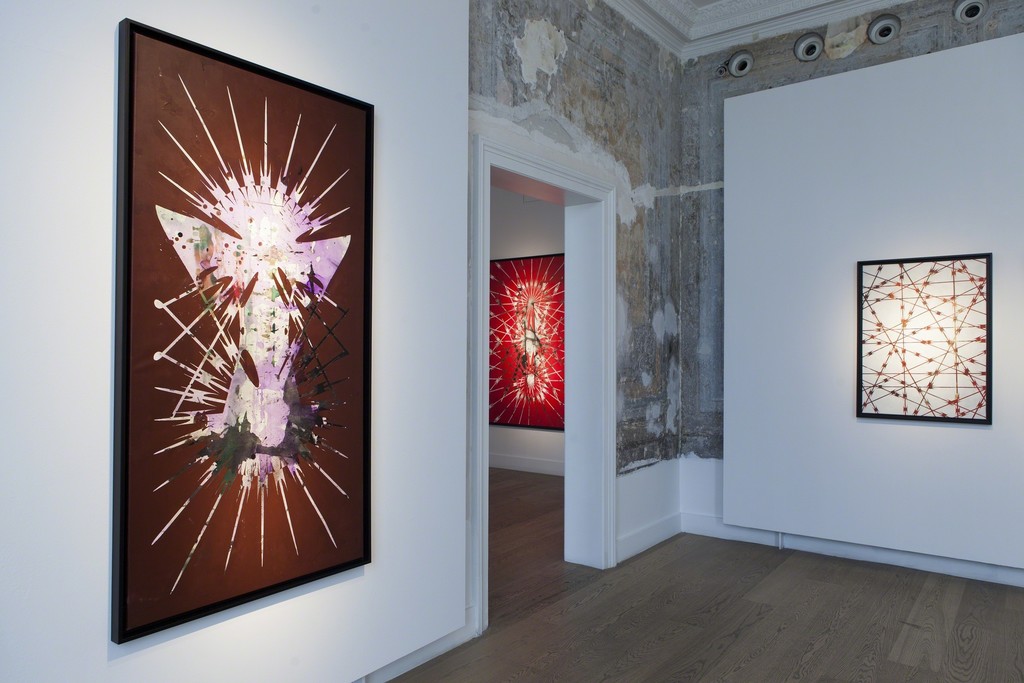 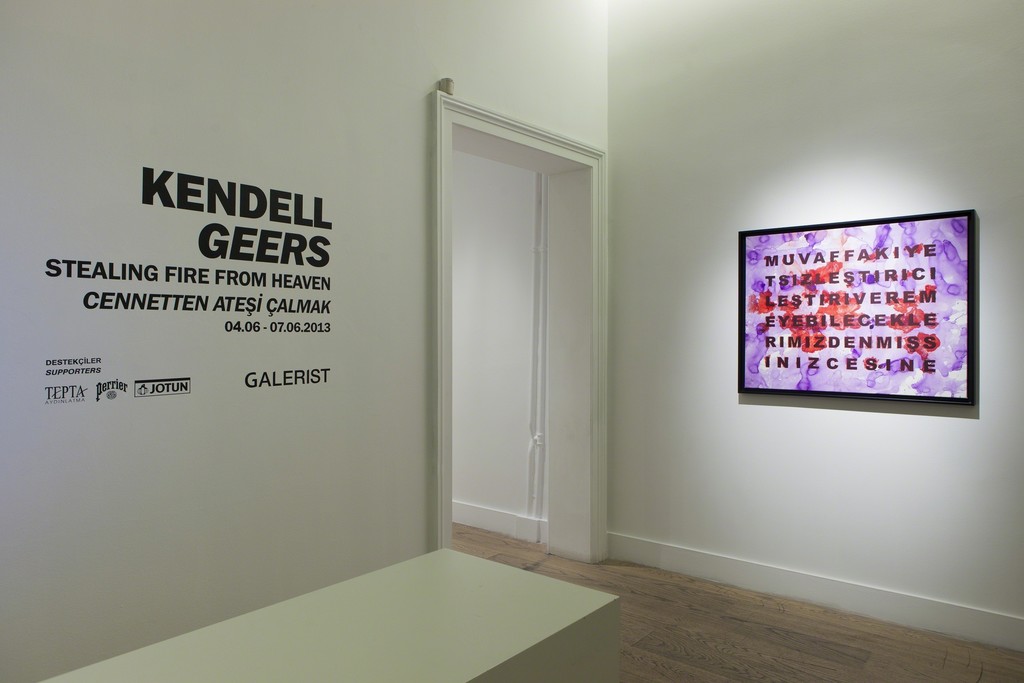 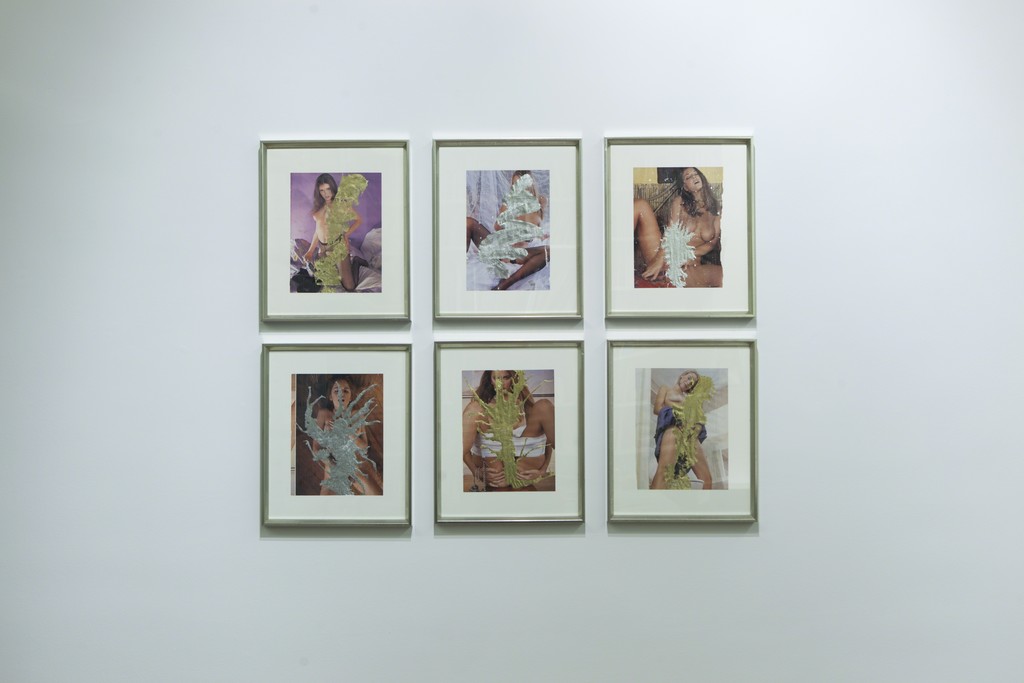 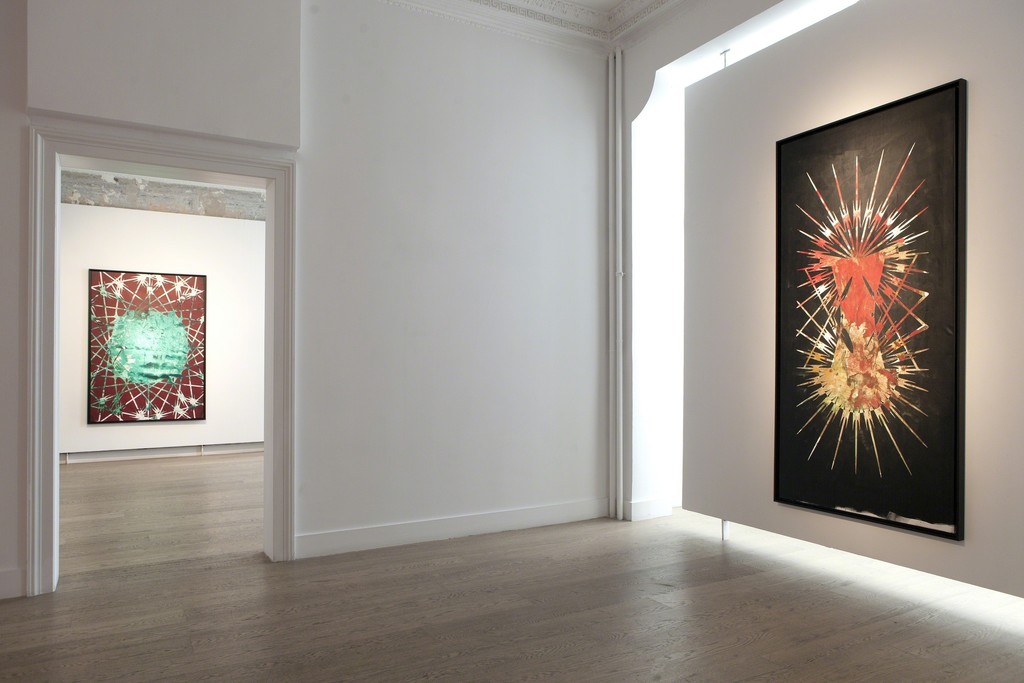 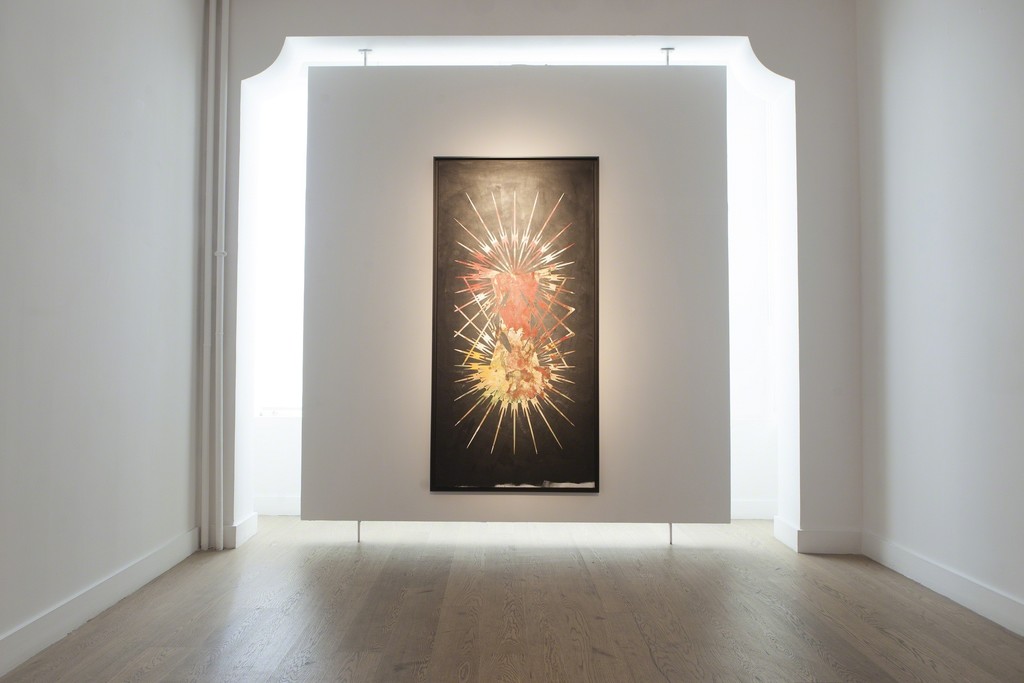 “Nothing is worse than what we can imagine”
“Where civilization entailed the corruption of barbarian virtues and the creation of dependent people, I decided, I was opposed to civilization.”
(J. M. COETZEE, Waiting for the Barbarians)
Galerist is pleased to present new works by Kendell Geers with his first solo exhibition in Istanbul “Stealing Fire From Heaven” between June 4th and July 6th. The exhibition show cases the South African-born, Belgium-based artist’s most recent paintings, along with works on paper and examples of his historical sculptures. Created specifically for this city, the exhibition “Stealing Fire from Heaven” is the artist’s personal spiritual call to arms, a political-erotical-mystical meditation in paint upon Bruce Nauman’s declaration that “The True Artist Helps the World by Revealing Mystic Truths.”
The artist states;
I have always been drawn to the thriving spiritual traditions of Istanbul, the spiritual layers of ancient archaeologies. From the secret messages of coffee grinds to the overlap of tarot cards, from the abstract shapes of lead cast into water to the Bible and Koran, the socially binding force of superstitions and folklore, from Gobekli Tepe to Hagia Sophia, the world of spirit, faith, mysticism and alchemy are all living traditions in the city once called Constantinople.
Demanding more of myself and more from art than cynicism, parody and pastiche, I decided to take a leap of faith and steal fire from heaven. I resolved to interrogate my own practice in search of that mystical element that for Lewitt was the first condition of conceptual art.
Influenced by the first clause of Sol Lewitt’s manifesto, “Conceptual artists are mystics rather than rationalists. They leap to conclusion that logic cannot reach,” Geers uses a Sol LeWitt wall drawing as the starting point for this series of paintings and drawings composed of outlines of Razormesh fence on canvas. The works transform the violence of a world divided by boarders and marked by fear into the symbolic world of spirit. The violence of cold steel gives way to a totemic emblem, charged with consciousness that holds creation and destruction, order and chaos, in a fragile contradictory balance. The paintings and drawings are portals through which spirit has been materialised and matter spiritualised.
The Razormesh or Razorwire fence, originally developed and patented in Apartheid South Africa has, since the artist’s childhood years, developed into an international presence, a silent sentinel marking every border and limits of the socio-political space. From the Eurostar platform at Gare du Nord in Paris to the gated communities of wealthy suburban mansions, from international political flashpoints and borders to airports, schools, prisons and hospitals, from Abu Ghraib to Guantanamo Bay, the razorwire fence has become an archetypal symbol of the present global condition.