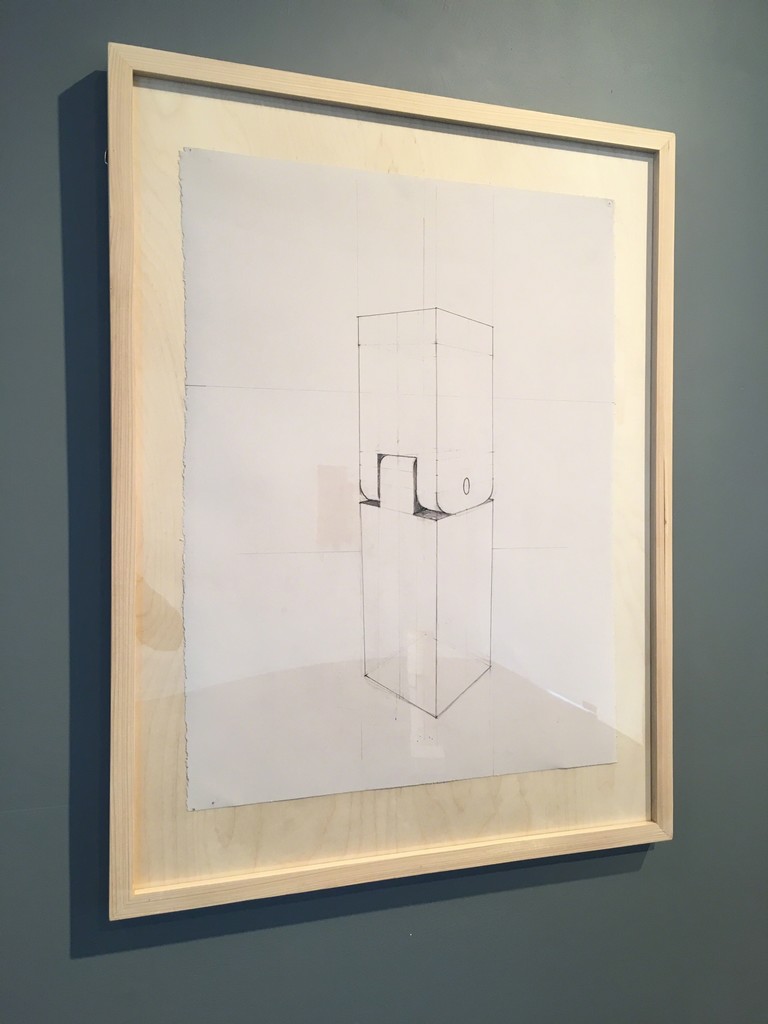 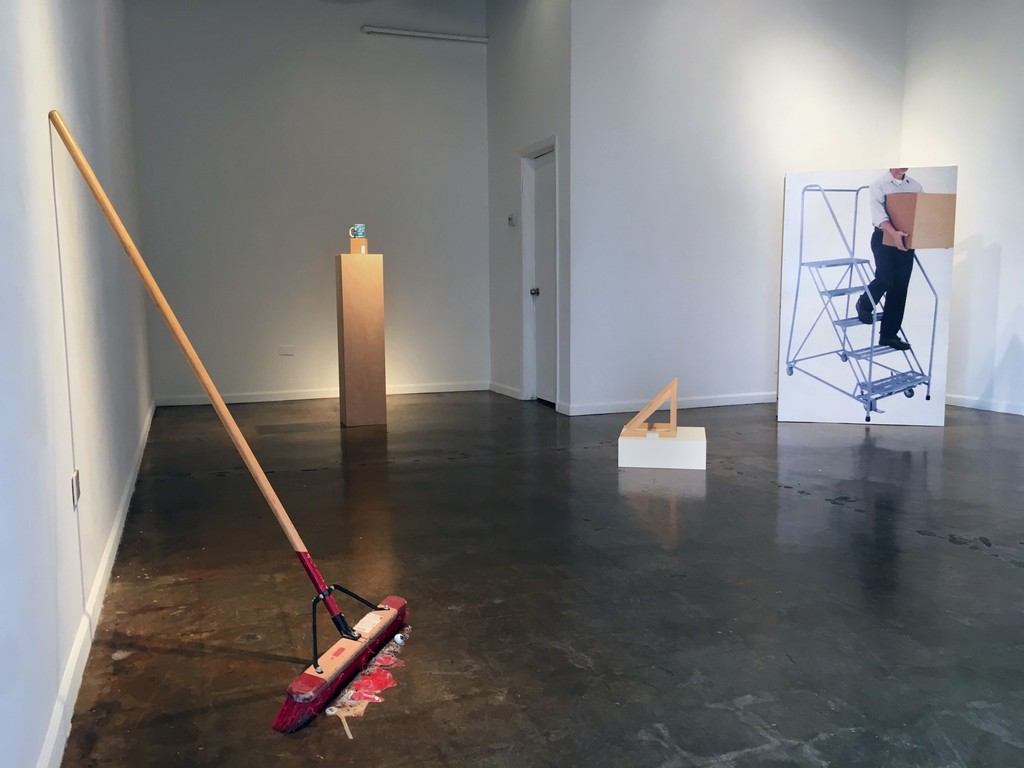 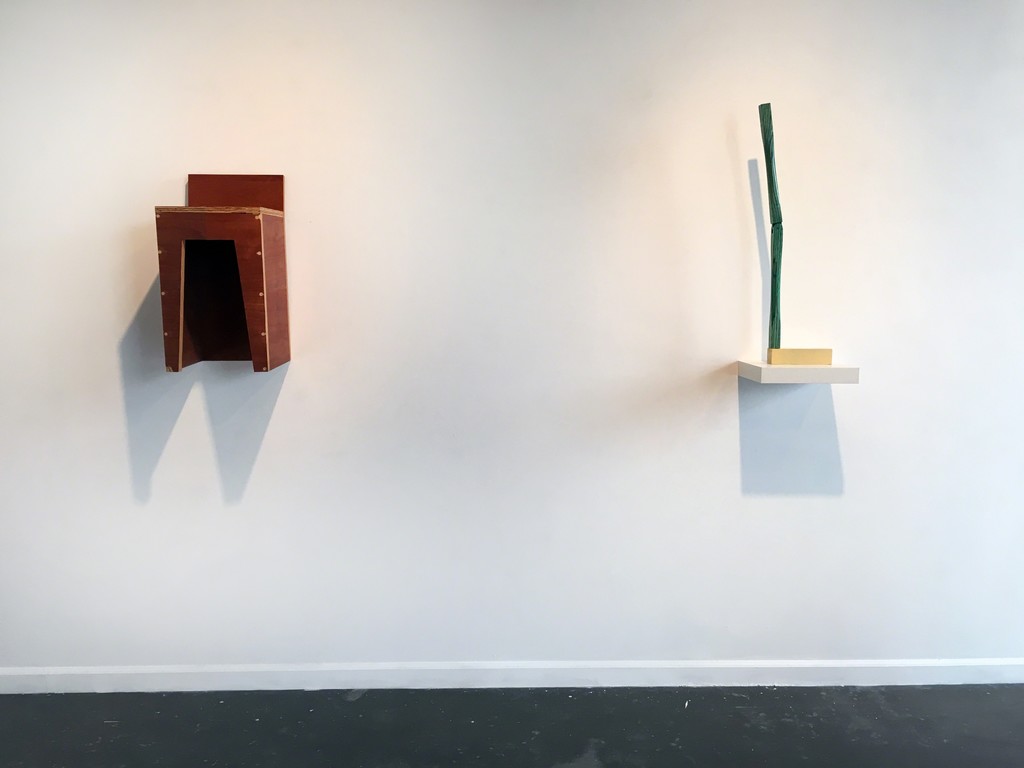 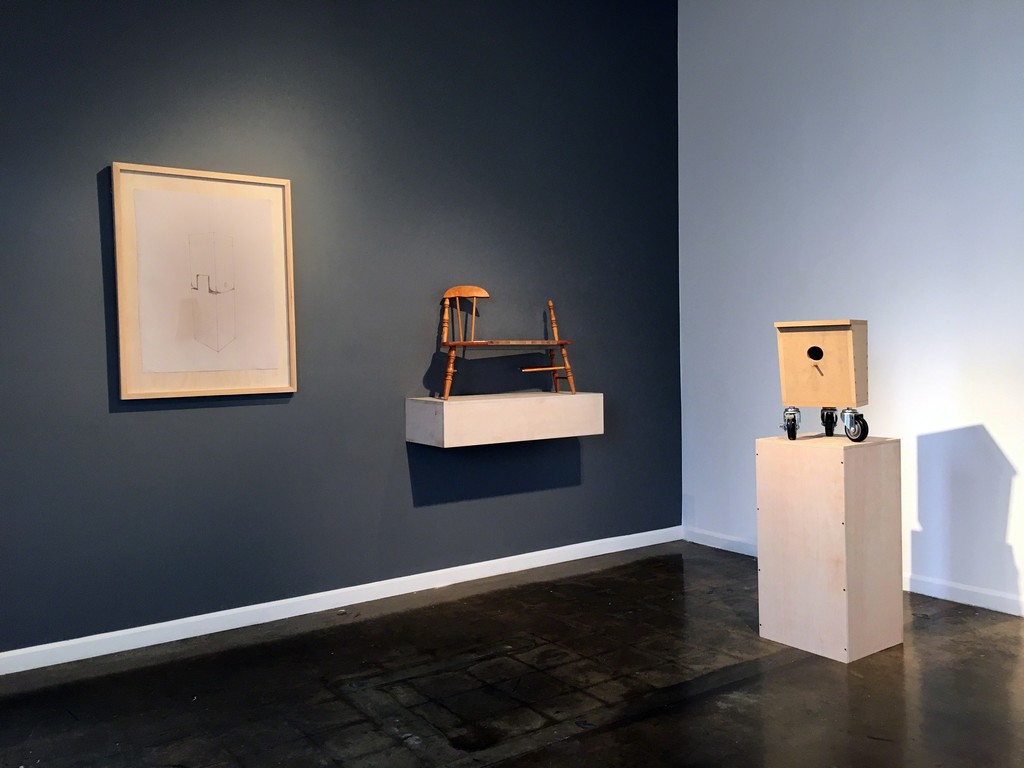 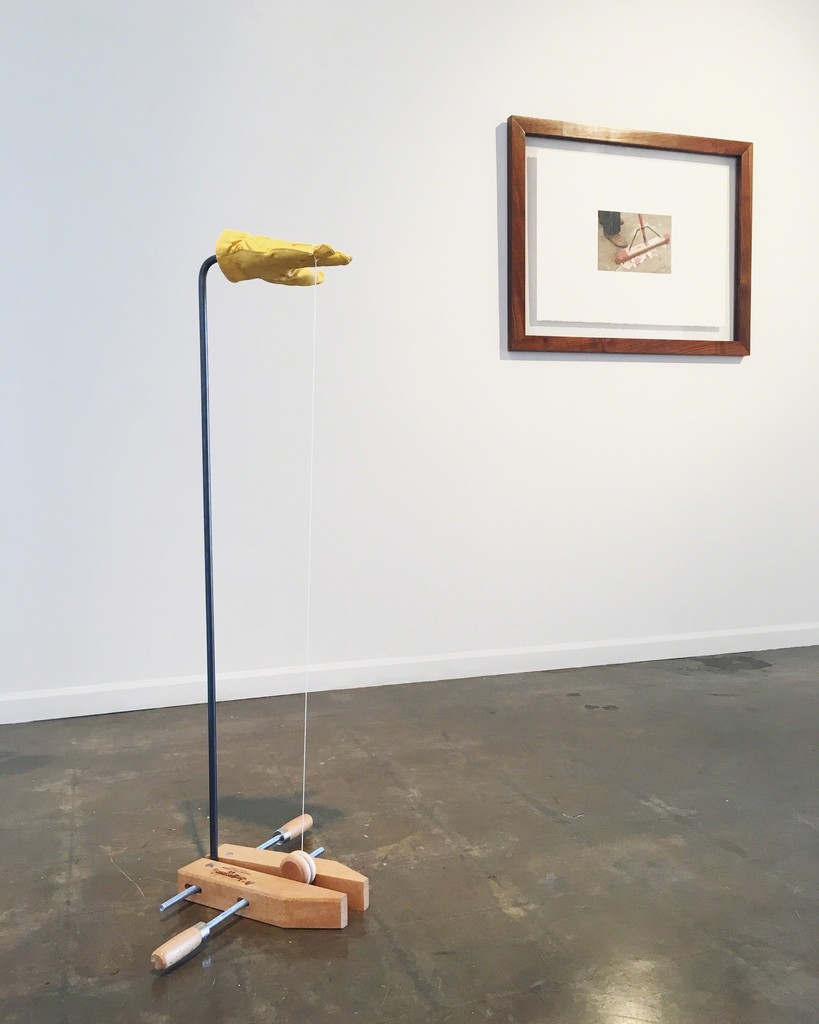 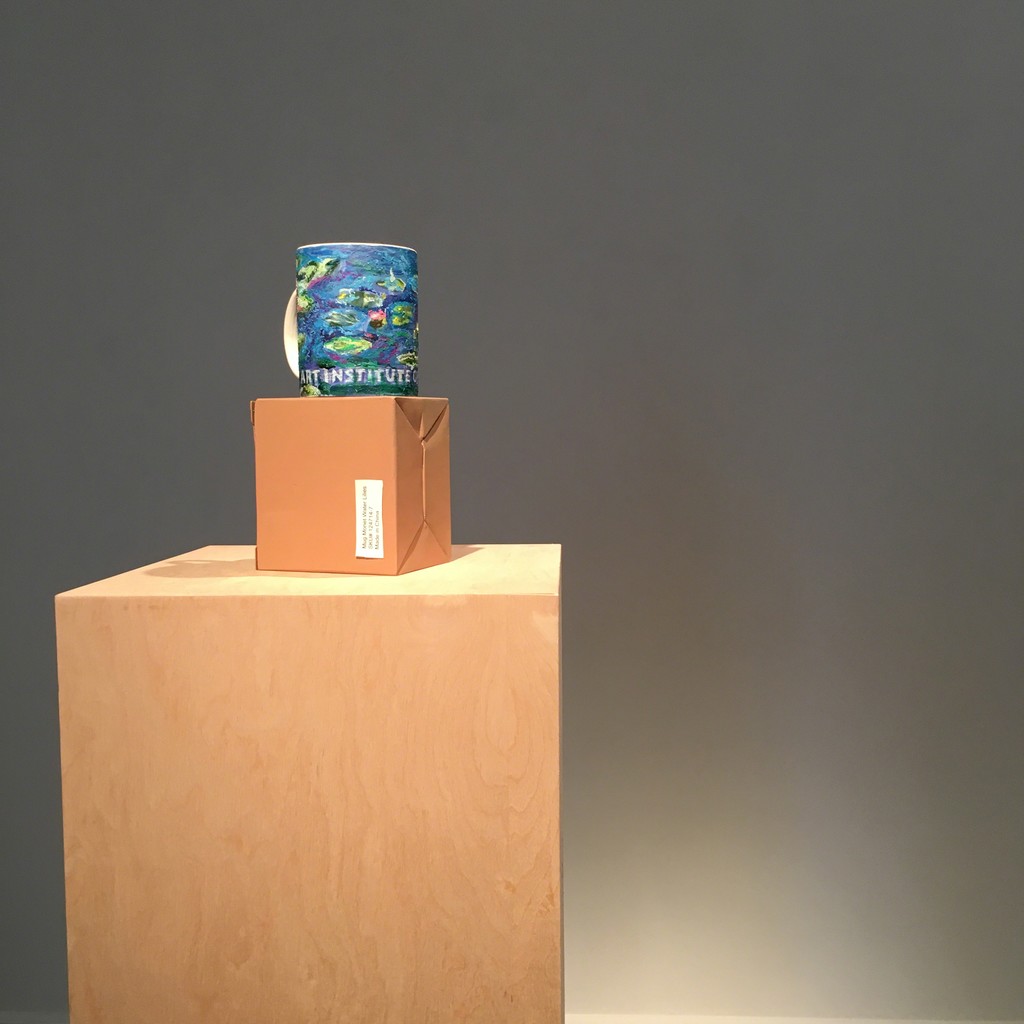 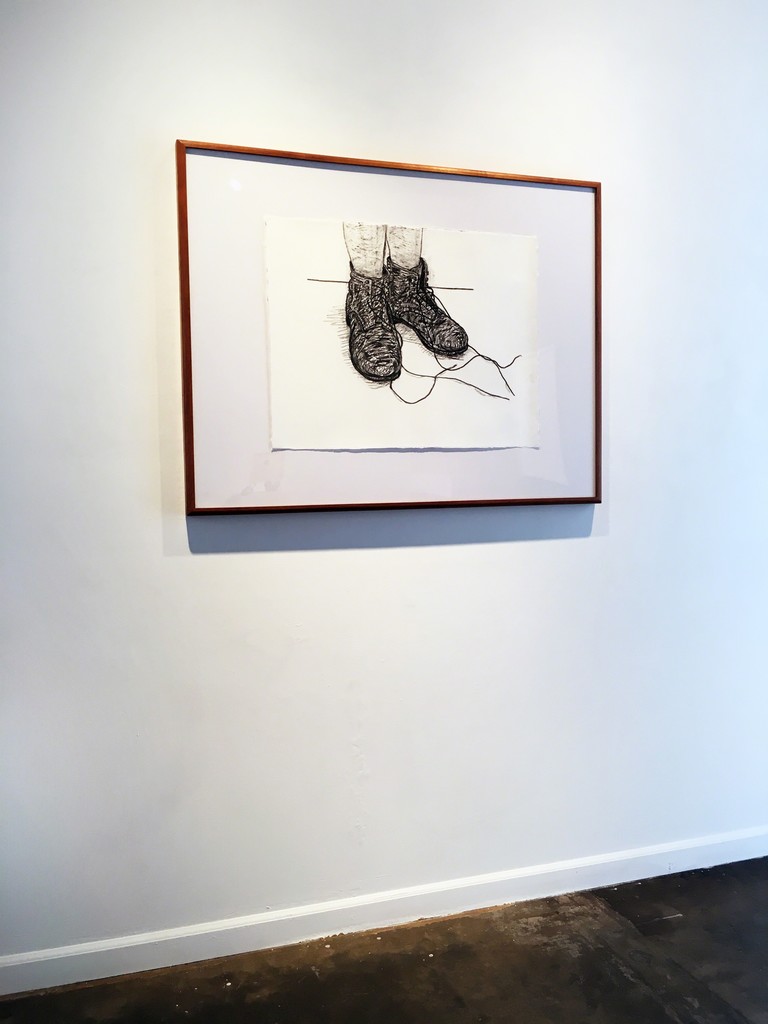 Galleri Urbane is pleased to announce Dylan Cale Jones’ solo exhibition, Good Work, opening on February 20th
and running through March 25th, 2016. Building upon his reflection on objects and their usage, Jones explores
his own questions and attitude about work and what constitutes “good work.” How do objects and tools, when
pristinely presented in glossy supply catalogues, affect one’s own fantasies of a job well done? How does an
observer perceive a worker and what effect do the qualities of good work have on the performer as well as the
audience? Jones recalls the story of Pinocchio, where the protagonist is initially an object who has to perform
legitimate work in order to become a legitimate “real boy.” Jones wonders what Pinocchio gained (or lost) by
sacrificing his replaceable body for a real, ephemeral one. One considers how, in real life, the value of an
inanimate object may fluctuate based on its use and aid in producing work.

“This process [of making a work] deliberately deals in things that I haven’t quite figured out yet and so its value
isn’t readily apparent, and it isn’t always about making something that is readily understood as “good.” Usually,
if I am excited by something, “good” is not the first word I jump to. Goodness is a value which can be vague
and a little weak. It sets a thing apart and celebrates it, but perhaps consummates its completion and empties it
out. I can appreciate when the goodness of a thing is allowed to remain undetermined.”

In his own words, Jones’ show is “an effort in better understanding my perception of the work I do, the way it
ought to be done, how those have been shaped by my class background and continue to shape my character.”
Through his work, Jones aspires to understand the relationship between one’s work ethic and one’s character
and how the two influence one another. Similar to Duchamp, Jones utilizes objects to invoke philosophical
challenges within the viewer’s mind. While considering the conceptual significance, the viewer is also invited to
experience an intimacy with each object. As in supply catalogues and craft magazines, each object is portrayed
in a “strange,” yet “reverent” way. Like the fictional story of Pinocchio (which is repeatedly referenced through
drawings and wood sculptures), there are mysteries in the portrayal of the objects in these catalogues, where
“they seem to omit the reality of consequences to the physical body performing the act of work.” In that way,
reverence increases for the object by itself, but simultaneously the relationship between living body and
inanimate object, or the process of work, is emphasized. Through various media, Jones provides pieces
including sculptural questions, two-dimensional drawings, and contemplative installations, each bringing their
own angle to the discussion of good work.

Dylan Cale Jones is a multimedia visual artist currently based in Chicago. He received his Bachelors of Fine Arts
from the School of the Art Institute of Chicago and his Masters of Fine Arts from Southern Methodist University.
Jones has been featured by Humans in Studios and has exhibited previously at Beefhaus in Dallas as well as at
various art spaces in Chicago. Jones was the winner of Galleri Urbane’s first annual open-call juried exhibition
and presents Good Work as a result.

The public is invited to an opening reception on February 20th from 6-8:30 PM at Galleri Urbane Dallas. The
artist will be present.