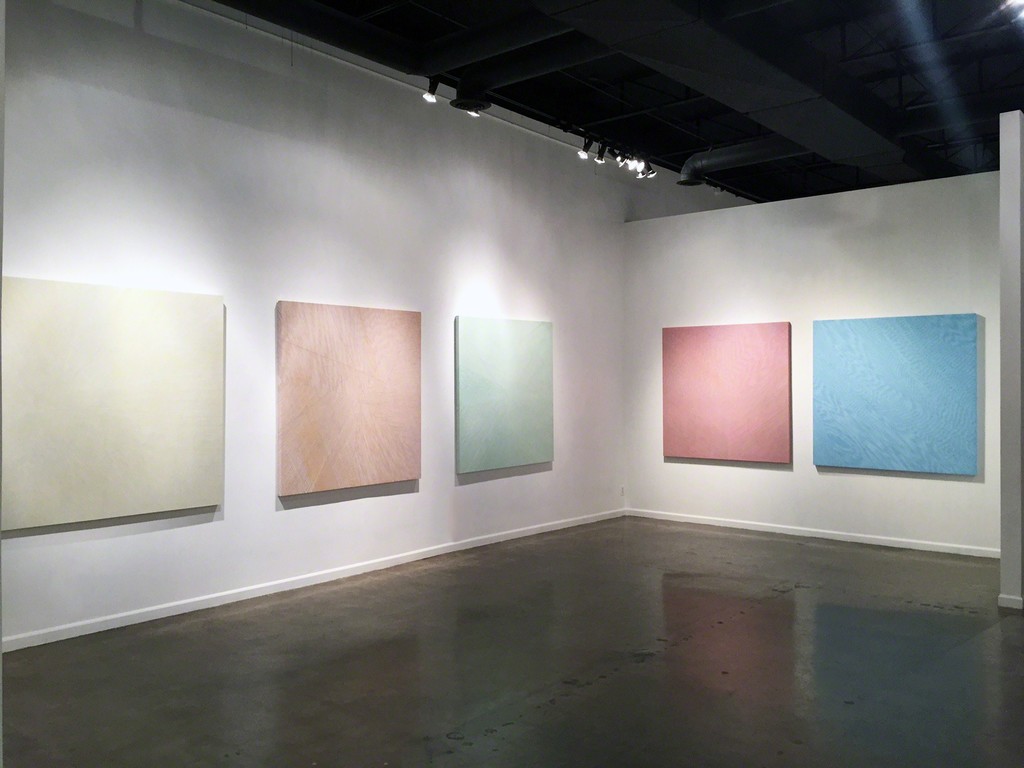 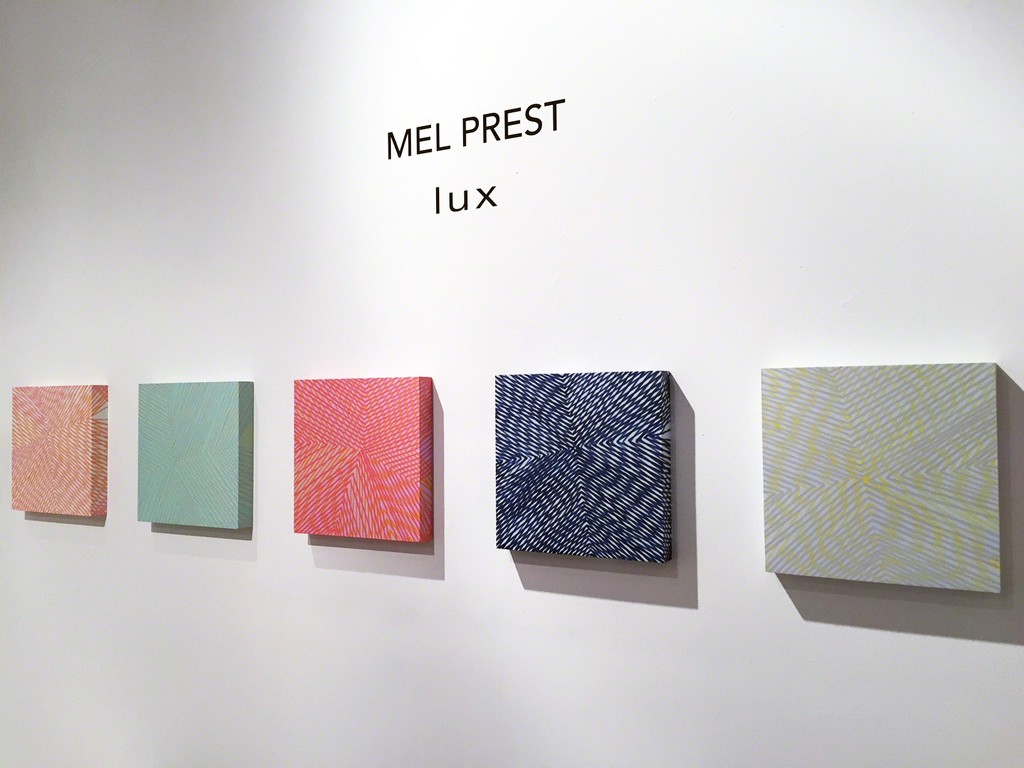 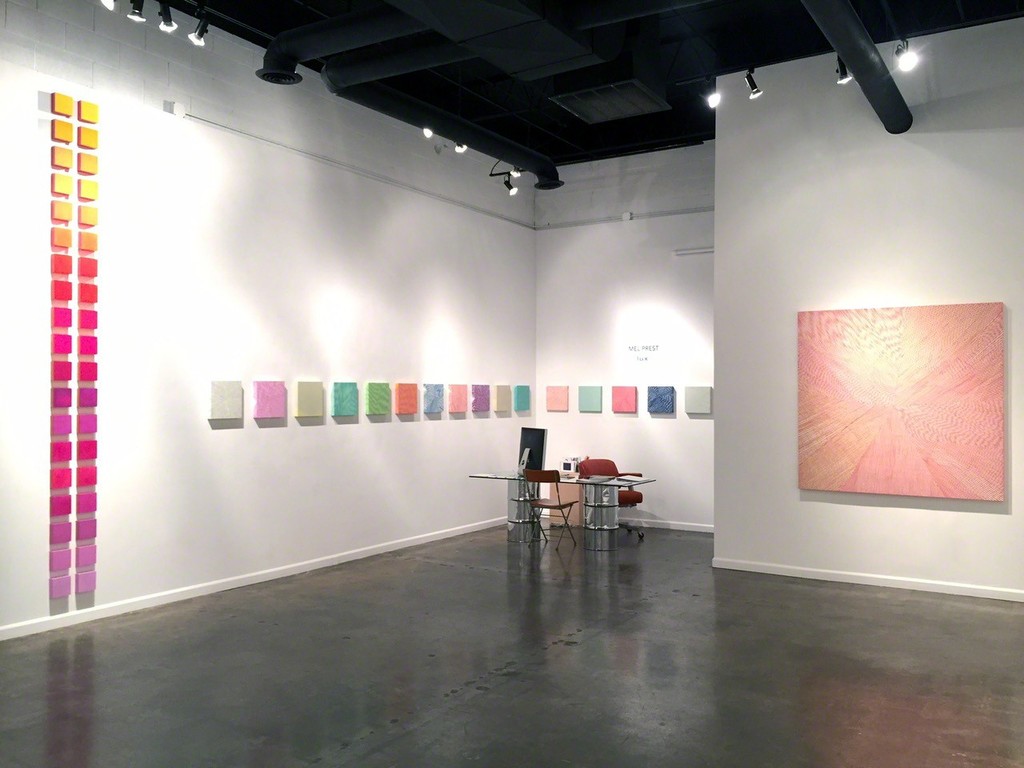 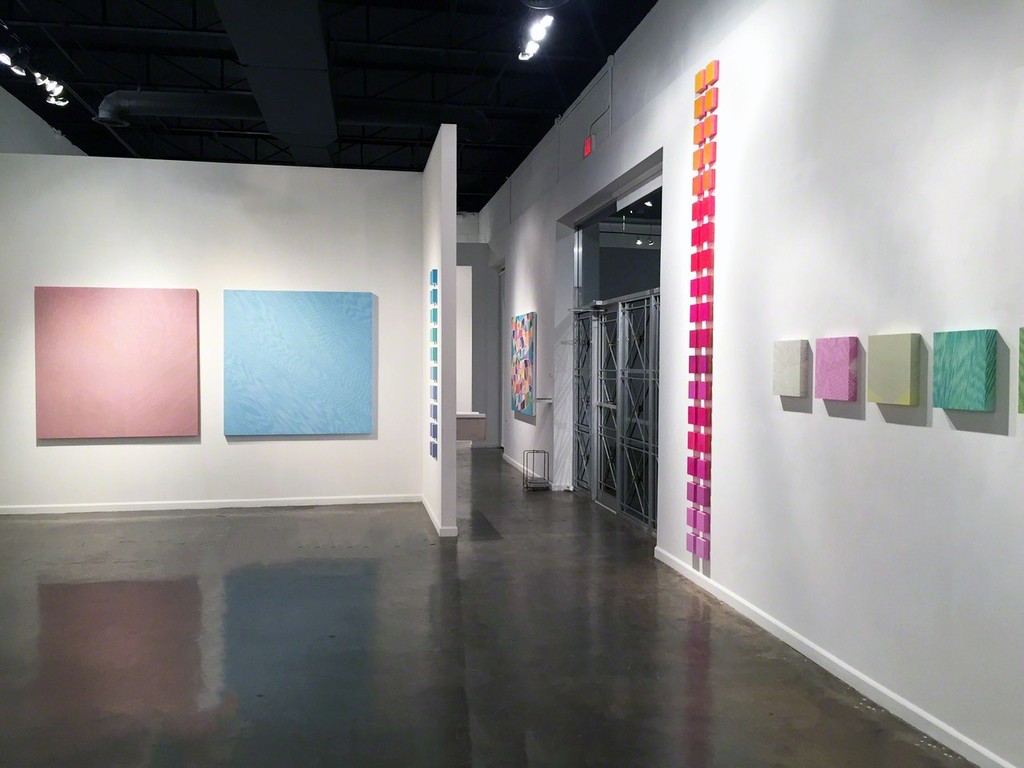 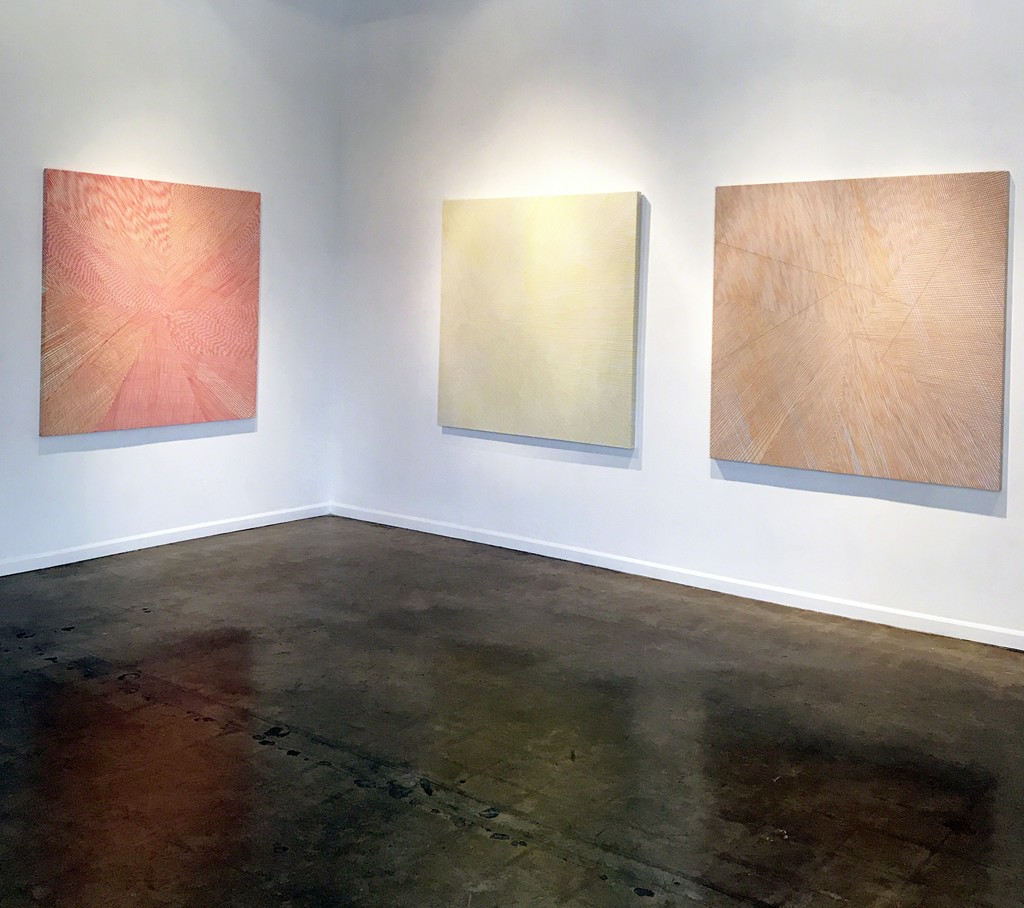 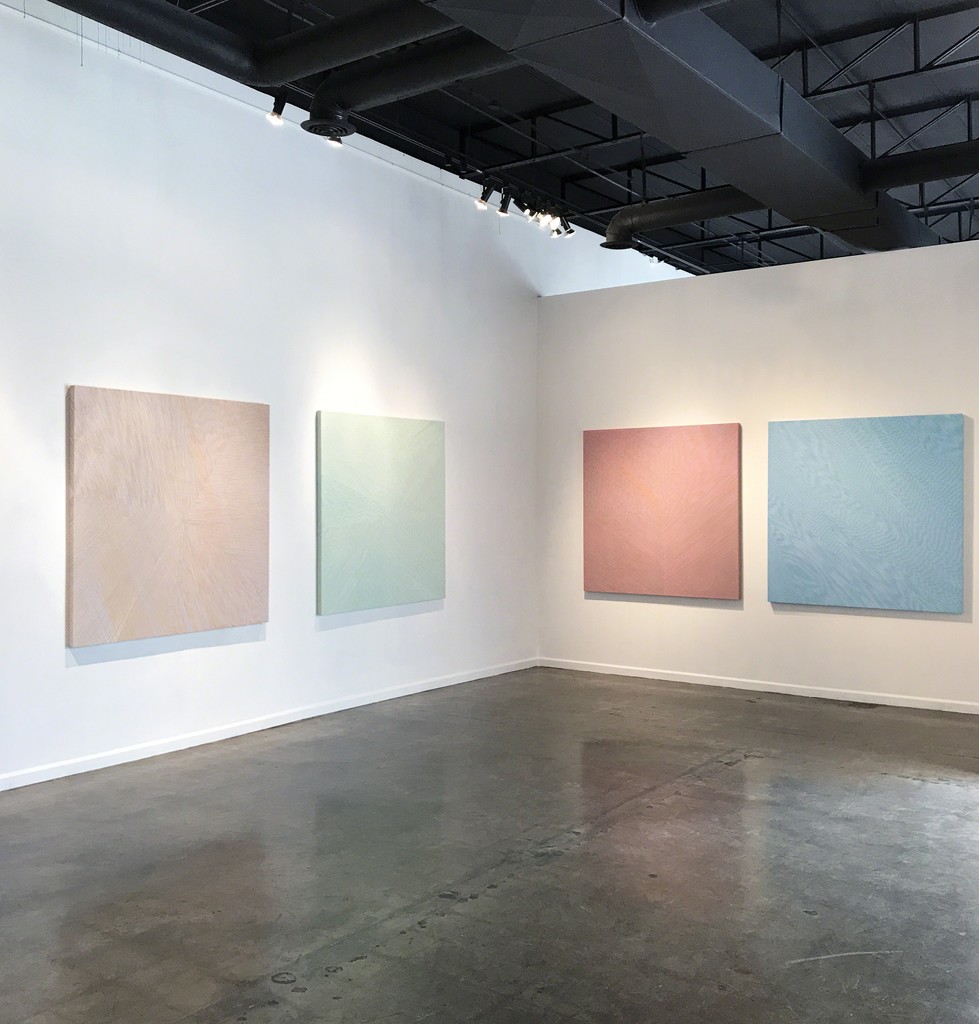 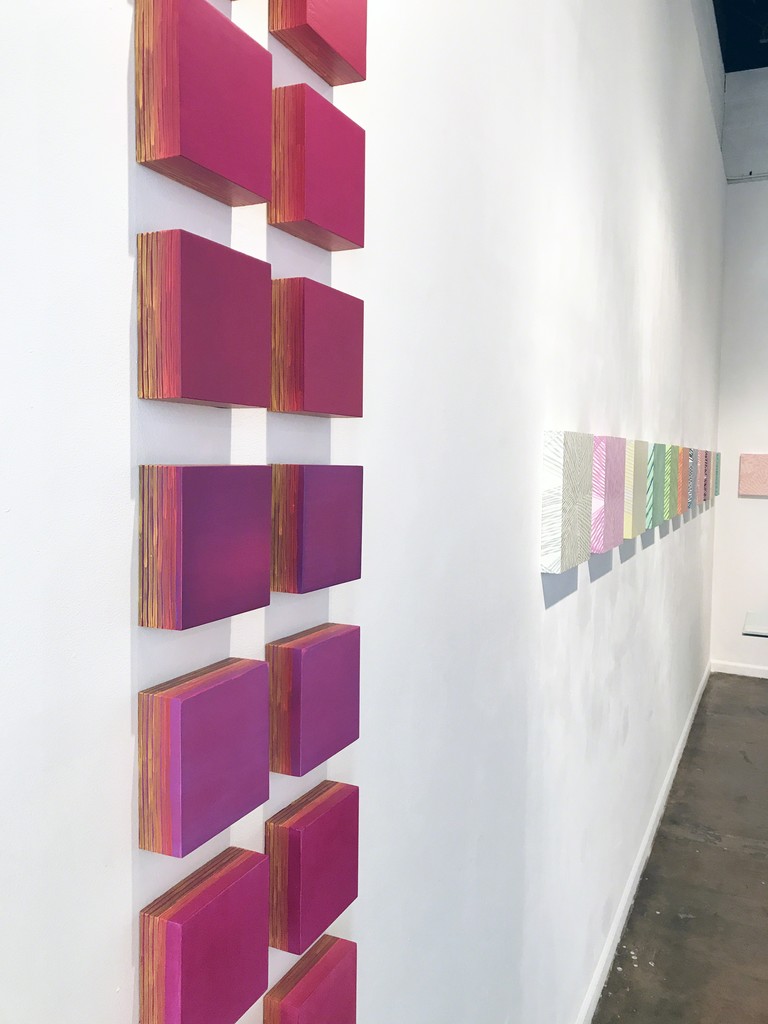 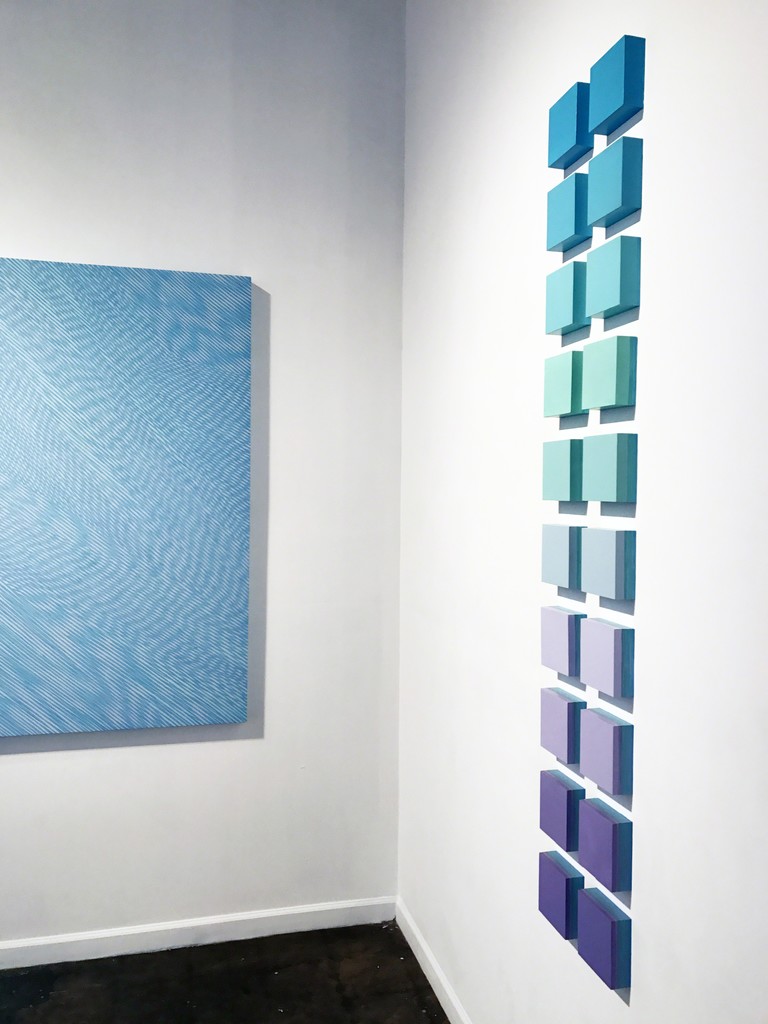 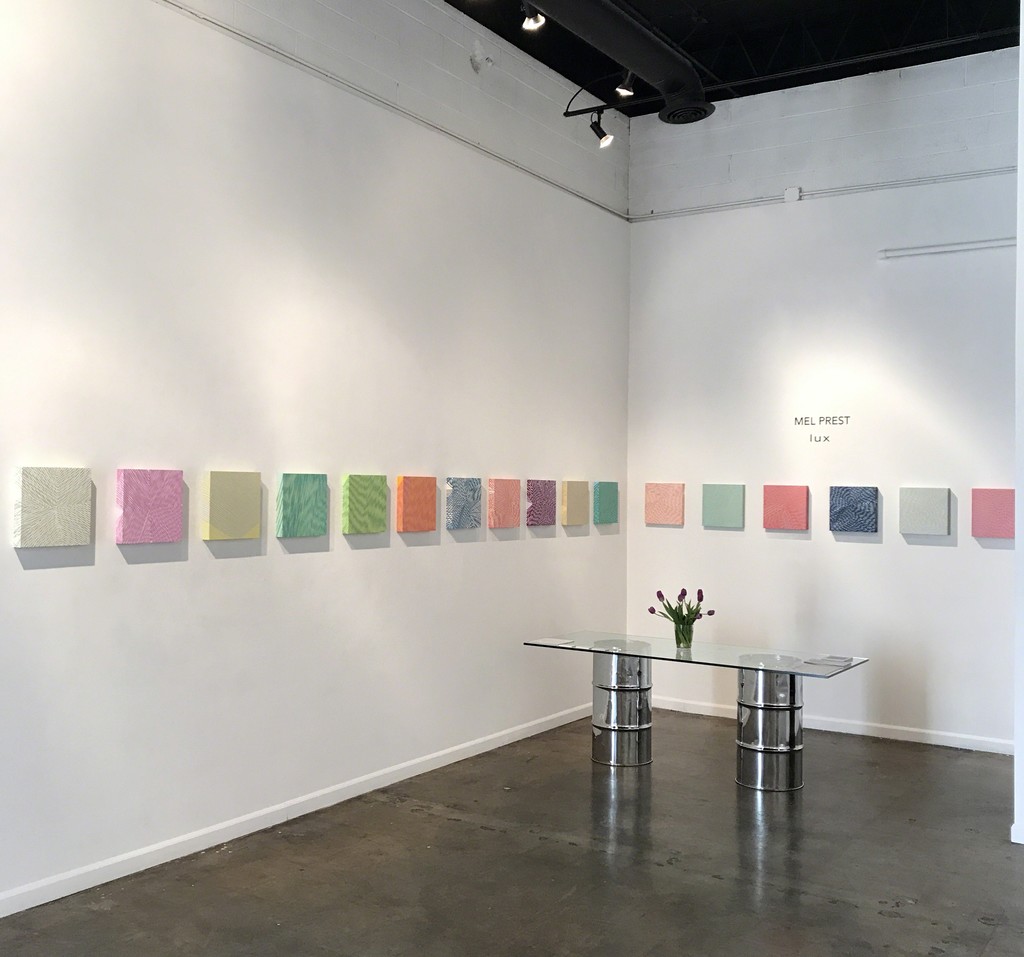 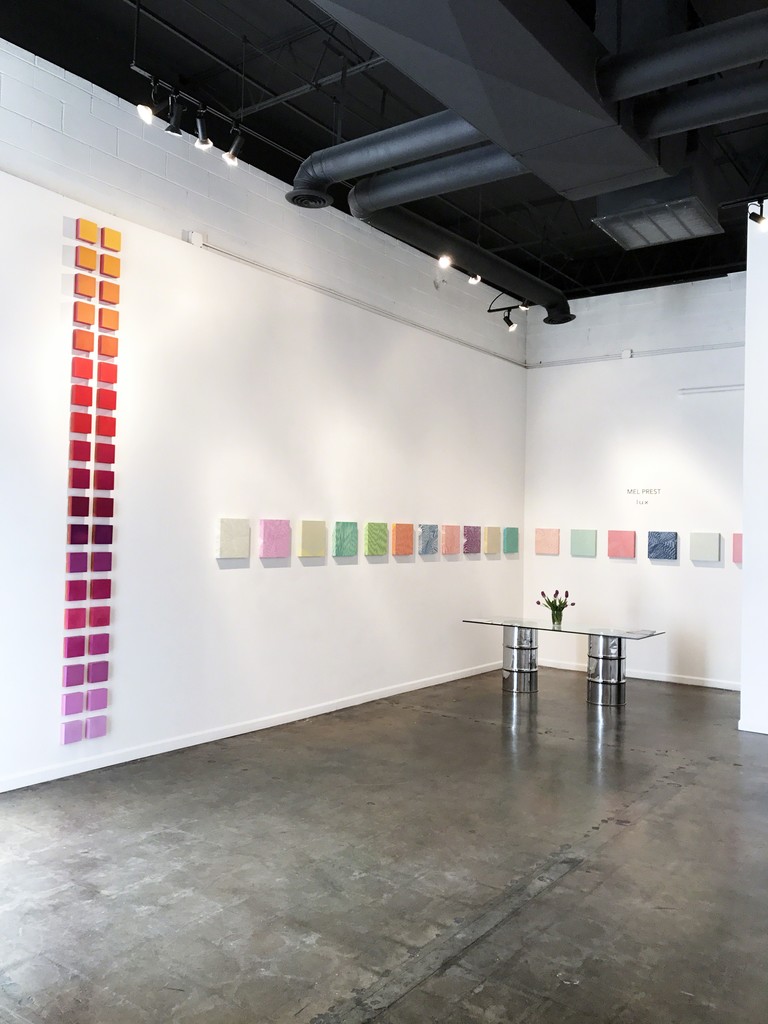 lux
Mel Prest
May 12 – June 16, 2018
Living and working in San Francisco for many years, artist and curator Mel Prest has become acutely attentive to the optical phenomena offered by the region’s geography. The San Francisco Bay’s persistent fog, for instance, provides shifts in light and color that transform one’s sensorial experience of the city. An awareness for unique visual occurrences like these has greatly informed Prest’s artistic practice and serves as the
basis for her solo exhibition, lux, opening in May at Galleri Urbane.
Featuring all new work made in the last year, lux pays homage to two cities whose atmospheric, geographic, and architectural qualities offer vastly different sensational impressions. The blankets of fog and floral scents of coastal San Francisco are reflected in paintings like Buttercup Aurora (2017), where the artist’s characteristic, hand-painted lines, applied in yellow and white, overlap in loose geometries to create a soft haze of
subtle yellow. In contrast, the artist’s travels to Mexico City, with its brightly colored markets and buildings, come to mind in works like Barragán 3 (2018) in which lines of green and grey intersect to activate a viewer’s eyes with an oscillating energy. Composed of 38 solid-colored panels arranged to shift from pale pink to deep magenta to yellow amber, Bougainvillea (2017) references the vibrant hues found at the studio and home of
Mexican architect Luis Barragán. While many of the works reference these specific locales, Prest’s paintings always explore visual phenomena that occur as a result of one’s direct encounter with these objects. In some cases, Prest achieves this by enlisting the use of specifically engineered paint, like
phosphorescent acrylics that glow in the dark or interference acrylics that shift hues when viewed at different angles, to provide the works with their own optical circumstances.
Other works, like Fuchsia Film (2018), investigate an ocular event called “film color” in which a non-corporeal color appears like a mirage after extended viewing of the painting. Taking inspiration from chance instances that transpire in the natural world, Prest’s paintings ultimately offer a unique ability to experience these rare moments time and time again.
A public opening reception for lux will take place at Galleri Urbane Dallas on Saturday,
May 12th, 2018, from 6:30-8:30pm, and a conversation with the artist will take place beforehand at 6:00pm.