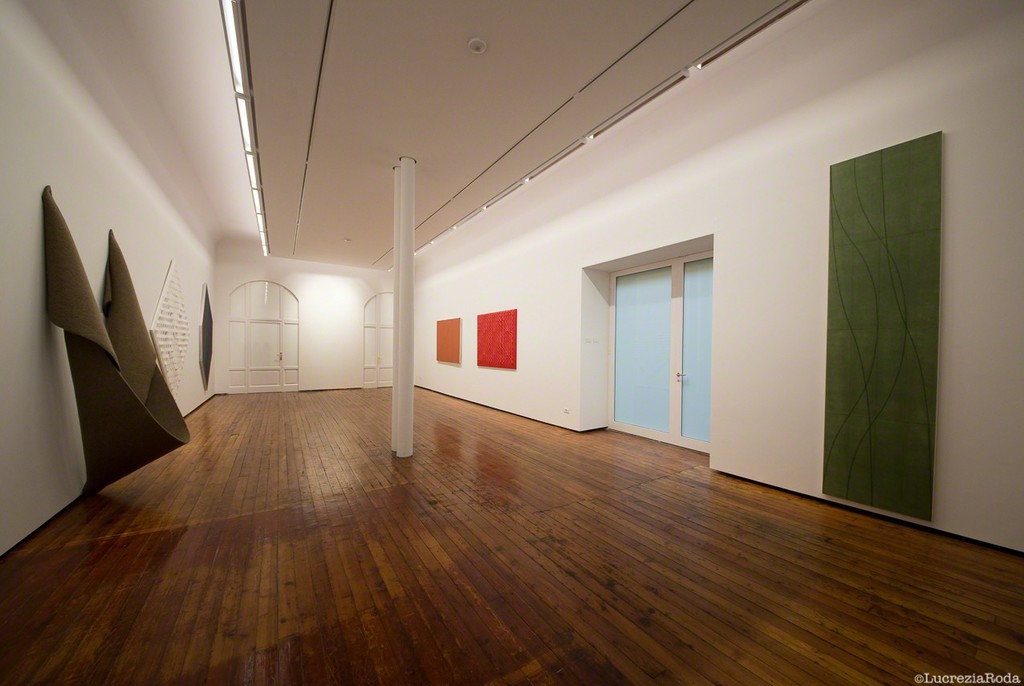 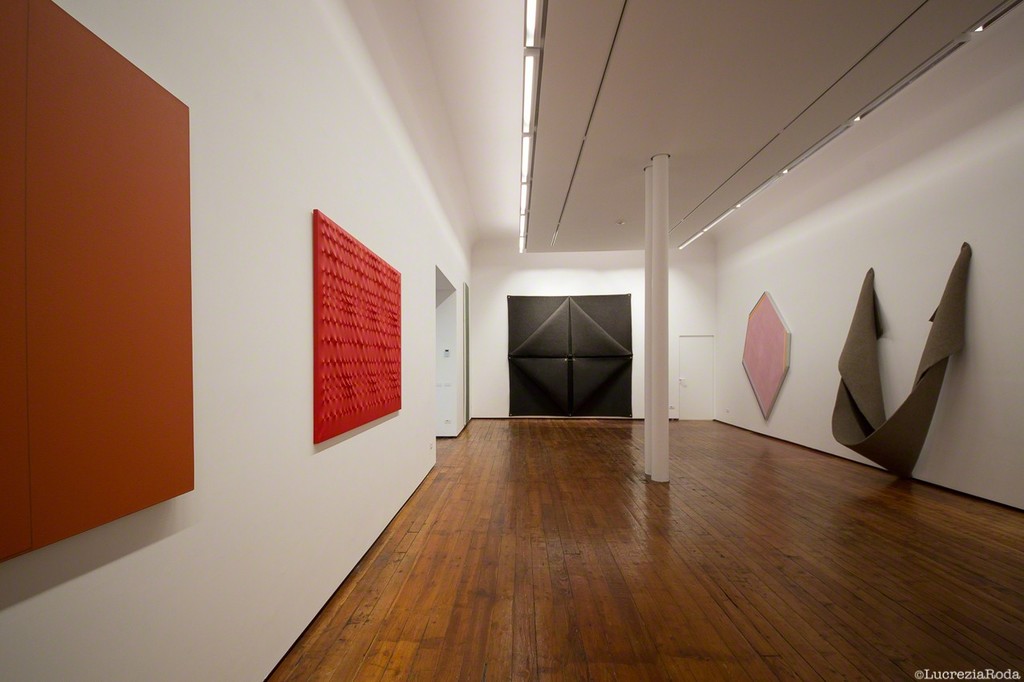 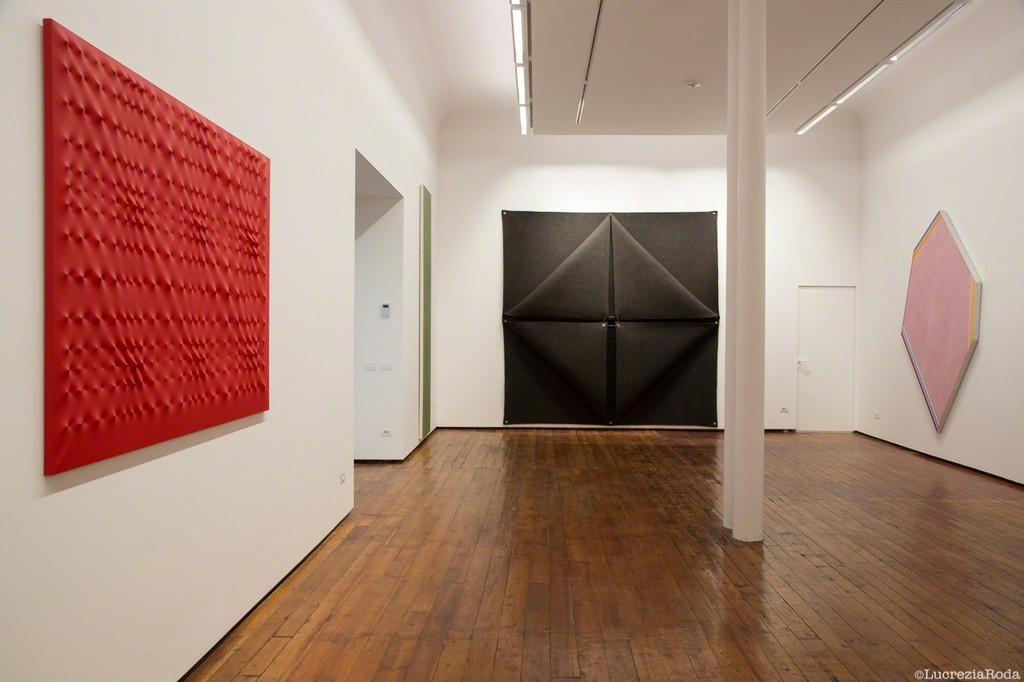 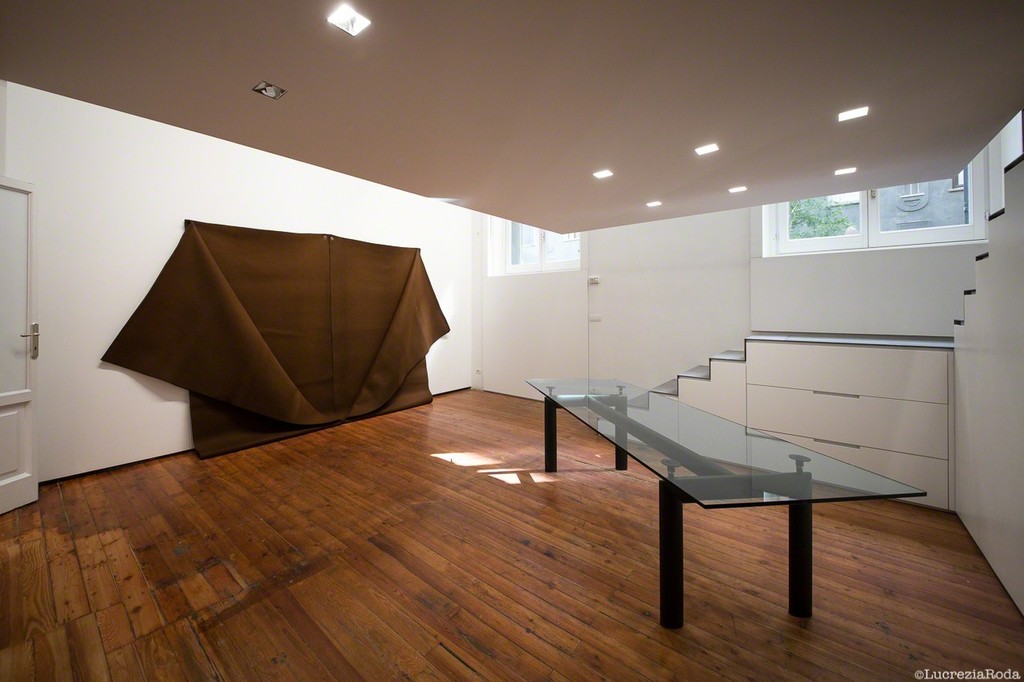 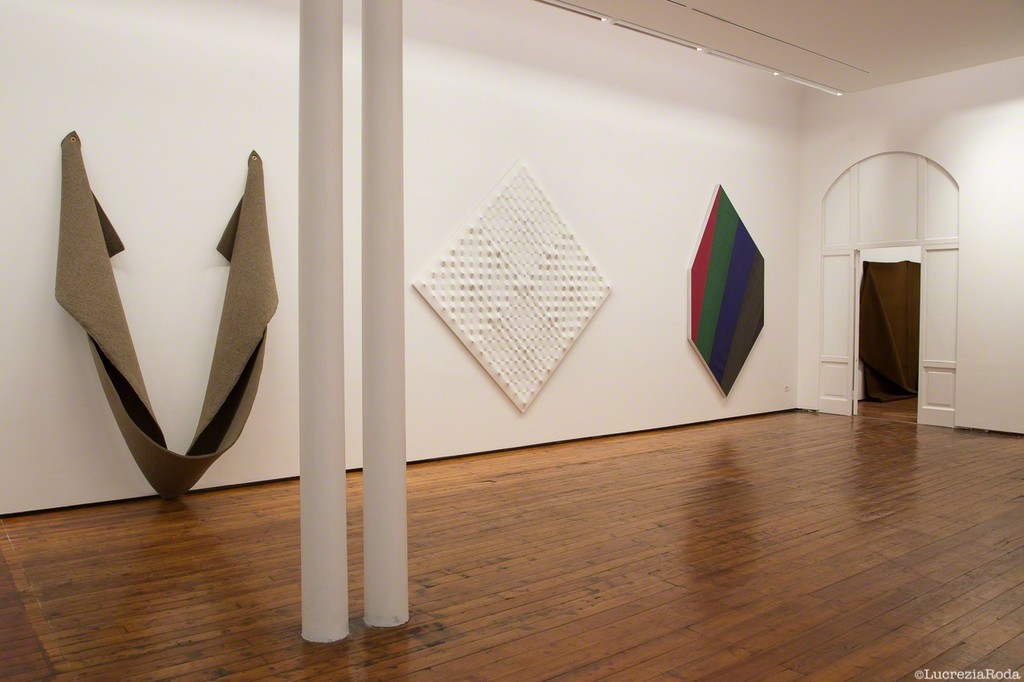 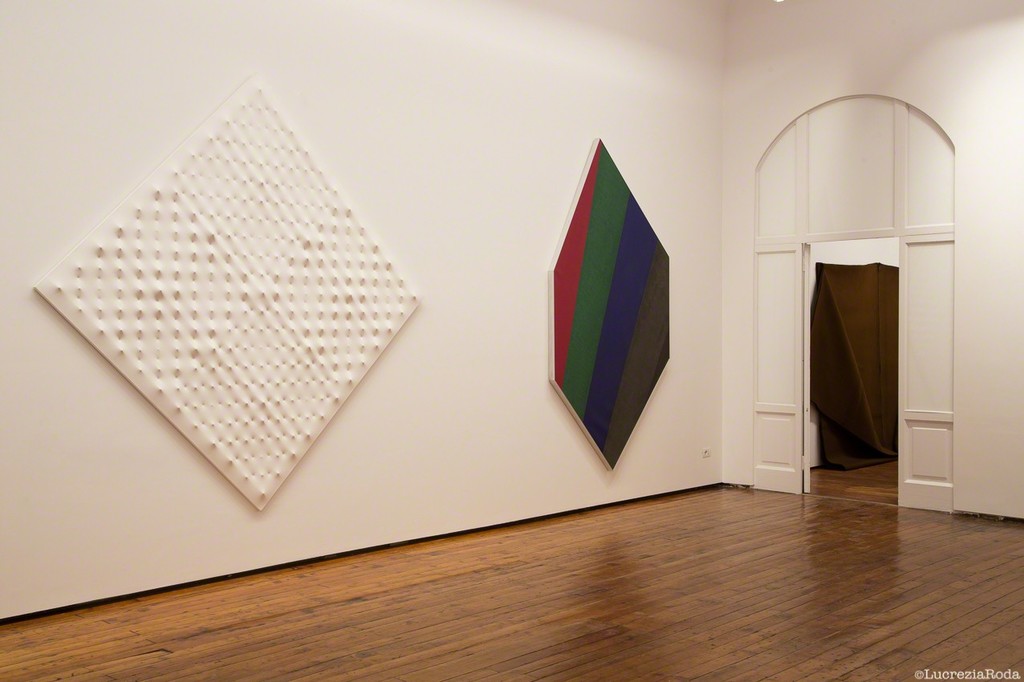 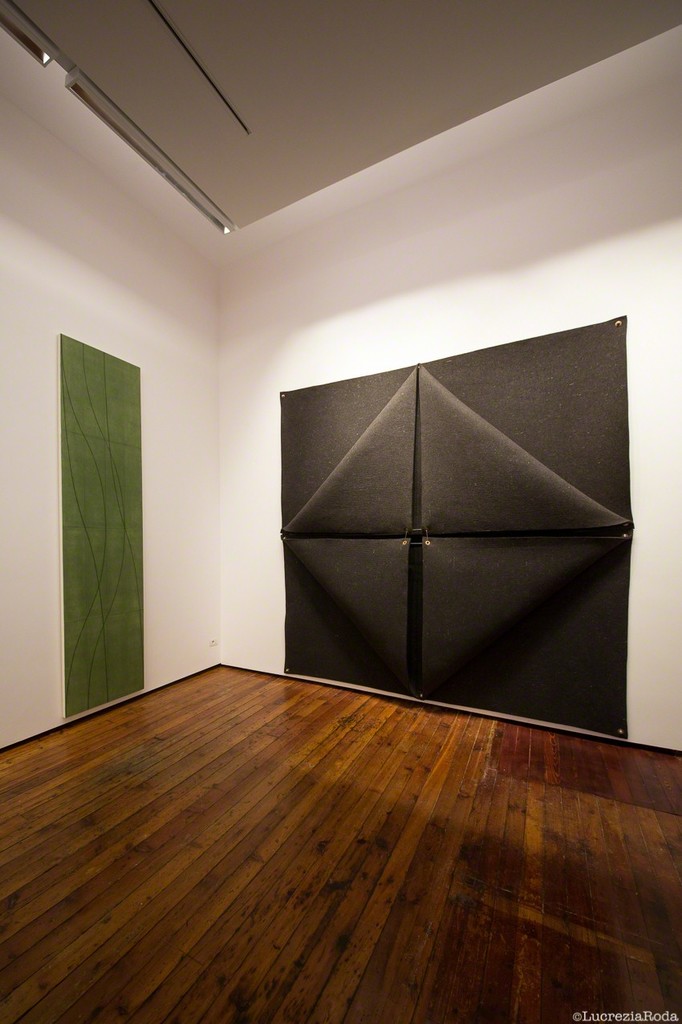 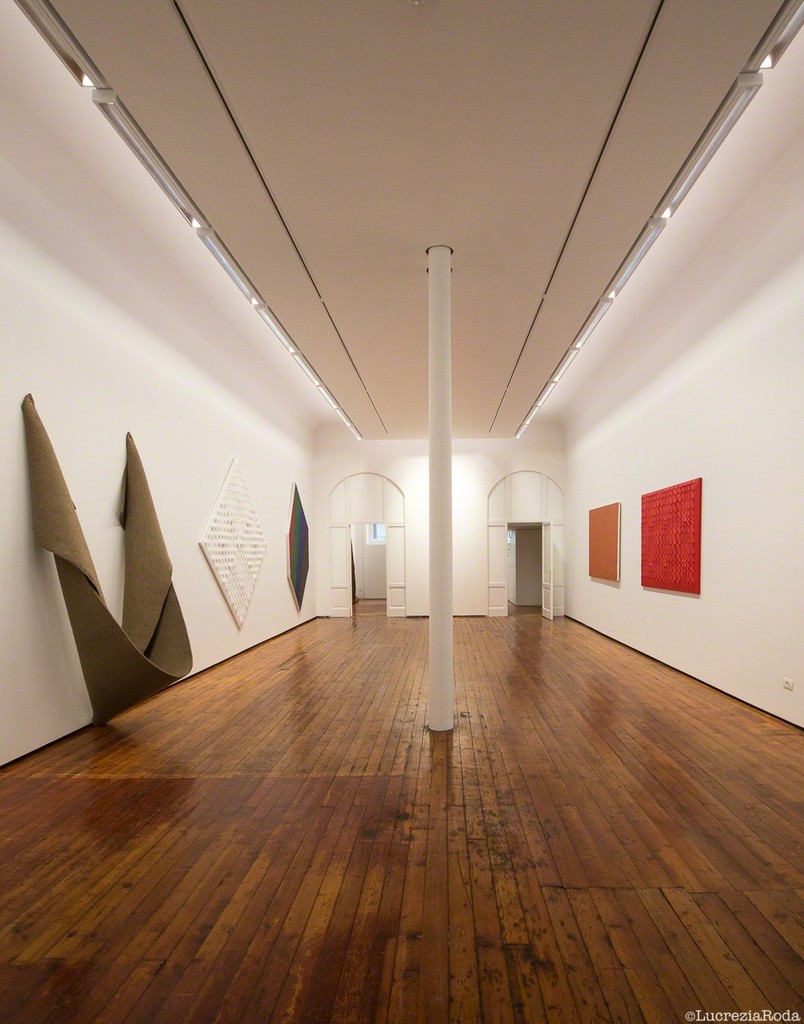 Although their researches are different, there are many points of contact in the poetics of the exhibited artists. An example is the use of geometric forms, sometimes irregular. Castellani uses them with the Baldacchini in the '60s and later with the eversion of the geometrical scheme and by rotating more works in sequence; Noland does it with the Shaped Canvas or Irregular Shaped in which the same shape of the frame assumes a geometric form in accordance with its inner geometry; Robert Morris declines irregular geometric shapes in the Felt of the 70s/80s, in which large portions of material are composed or cut; Robert Mangold uses geometric patterns deconstructed, asymmetric, innervated by graphite lines and unusual shapes.

It is also possible to find similarities in the use of the colours: Castellani, Mangold, Noland and Morris frequently resort to monochrome surfaces and abandon the primary ones. Castellani prefers the white; Noland uses all colours except the primaries; Mangold adopts the secondaries and tertiaries colours, in pastel shades; Morris prefers the mirroring steel in the sculptures, the black, white and grey in the felts of first production and later the secondaries colours.

Other similarities are found in the way the four artists radically rethink the relationship with the surrounding environment. Both in Castellani, Mangold and Noland the painting, dried up to its structural components, brings the viewer's attention outward, beyond the limits of the canvas: the work is not in itself, but part of a whole. A concept even more clear in Robert Morris, who in 1965 placed reflecting cubes on the floor of the Green Gallery in New York: reflecting the space and the public on their surface, the sculptures blend with the perception of the environment.

The path of all four converges towards minimalism. The Topologemi by Castellani in the early 70s are paintings without eversions, in which are visible only thin graphite lines placed in geometric pattern. In the 70s, Noland comes to such a subtraction of geometric elements and colours to touch the pictorial minimalism. Mangold reduces painting to its essential components, through the frequent use of monochrome surfaces and Robert Morris, with his sculptures with primary forms becomes one of the major tenets of Minimalism.

Enrico Castellani, Robert Mangold, Robert Morris, Kenneth Noland: four unique styles for a reinterpretation of one of the most exciting moments of the history of the World War II.