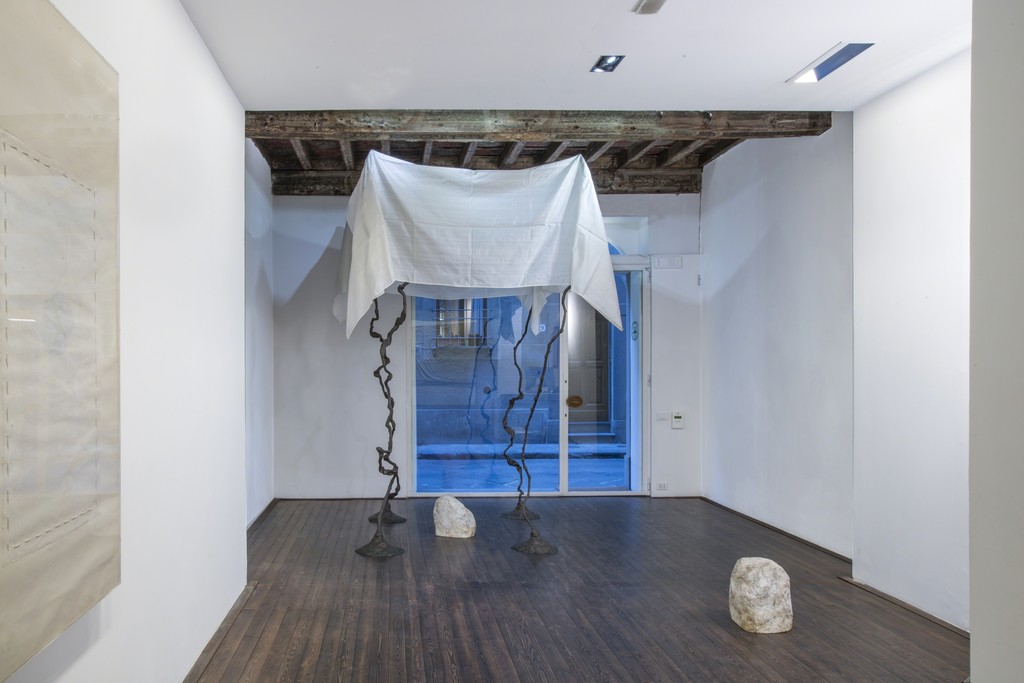 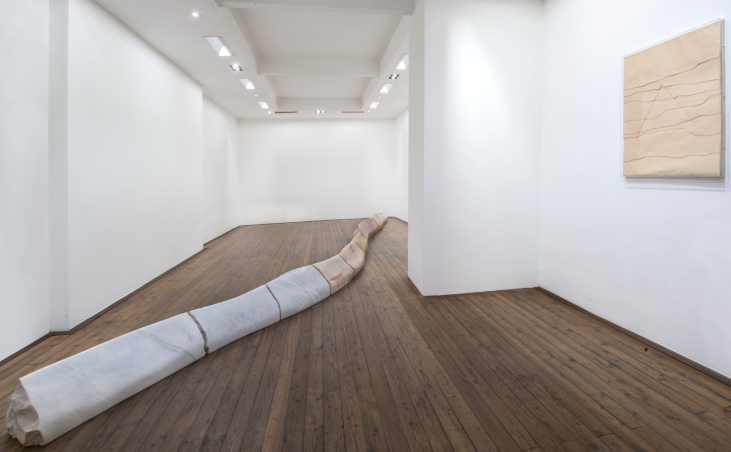 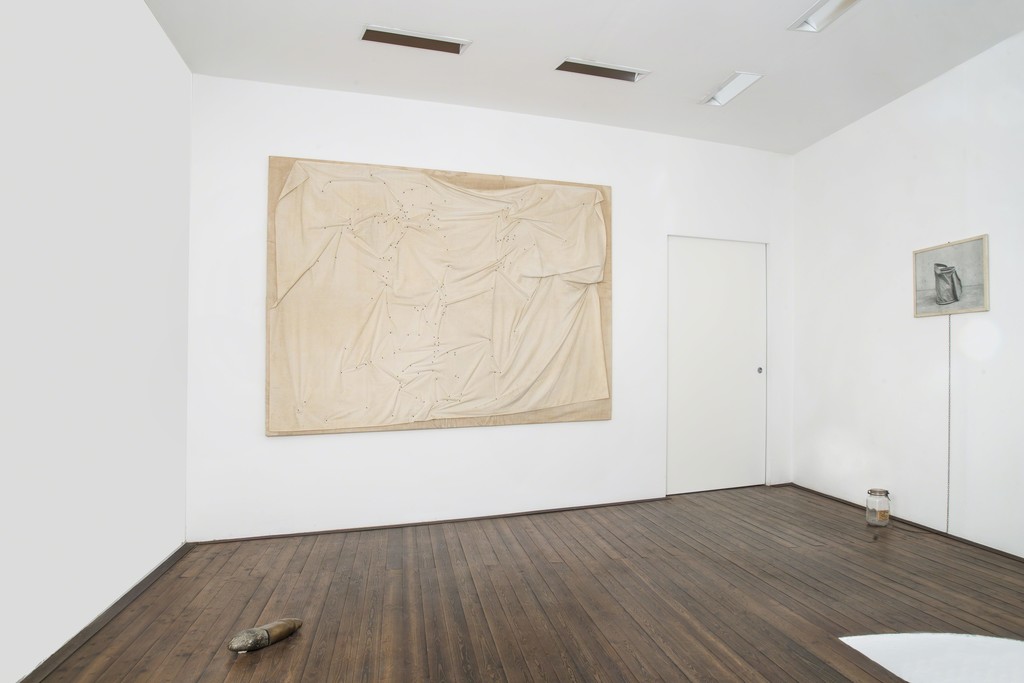 After the recent death, gallery Il Ponte dedicates to Hidetoshi Nagasawa, artist with whom it collaborated several times starting from the exhibition Interferenza, held in the gallery in October-December 2005, a retrospective focused on the 70s.

Specifically from 1969 to 1979. Just in these years Nagasawa, arrived in Italy in 1967, defines his way of being an artist. Finding in the sculpture, often played even on minimal reliefs of the surface, his own expressive modality, developed then throughout his life. The exhibition and the catalog are focused on an important and rare nucleus of works of the 70s. In the exhibition a close selection will be presented among them Colonna (1972), Viti di Bagdad (1975).
Instead, in the catalog will be published a large repertoire of images of the works always of those years.

Hidetoshi Nagasawa was born in Manchuria on 30 October 1940 (his parents were Japanese and had moved there because of his father’s work; he was an army doctor). During World War Two, the Soviet Union’s attack meant that they had to flee to Japan, to near Tokyo. In these difficult years, tainted by the war, Nagasawa went to secondary school where he learned about contemporary art, opening up to contemporary groups (Neo-Dada) and discovered the activities of the Gutai group: he admired their creativity, their freedom of expression through their Actions and their new language – by which one could express an idea with any means – totally opposed to the academic cultural tradition of the Japanese artistic milieu. He visited their many Independent Exhibitions organized at the Tokyo Museum by the Yomiuri Newspaper until 1964.
In 1963 he obtained a degree in Architecture and Interior Design and straight away began working in the design studio of a department store and later in an architect’s studio.
In 1966 he began his bicycle trip – fundamental for his life and for his art – across Asia, passing through Bangkok, Malaysia, Singapore, India, Pakistan, Afghanistan, Persia, Iraq, Jordan, the Lebanon, Syria, and Turkey. From East to West, from Greece to Italy, from Brindisi to Naples, Rome, Florence and Milan, where in 1967 his unrepeatable adventure came to an end. It had been typically Zen: don’t think about the arrival, but treasure every experience you live through in order to reach your most profound being; for the artist this would be exalted by the practise of Art.
During the Sixties in Milan there was an atmosphere of stimulating artistic fervour (the work of Manzoni, of Fontana and later of Arte Povera), which Nagasawa was keen to join in. He moved to the working-class neighbourhood of Sesto San Giovanni, and came into contact with artists such as Castellani, Fabro, Nigro, Trotta, and Ongaro. He formed a particularly strong friendship with Fabro.
From 1968 Nagasawa’s work went forward strongly; he created Perspex Solids, manipulated Objects, and created Actions in the countryside in Lombardy. In the same year he took part in the Anfo Art Festival (near Brescia) with the Turin Group (Marisa Merz, Getulio Alviani, Nanda Vigo).
The early Seventies saw his first personal shows, in Milan (Lambert, Toselli Galleries), Rome (L’Attico, Arco d’Alibert Galleries) and Turin (Galleria Christian Stein), in which the artist revealed a personal journey which can be inserted into the sphere of Conceptual Art passing from video to words, conceived as visual elements, engraved onto metal sheets. During those years Nagasawa undertook the production of many works of sculpture, using gold, marble and bronze.
In 1972 he took part in the 26th Venice Bienniale and developed an important working relationship with Ardemagni from the Milanese gallery; he curated the catalogue for the show that Nagasawa had that year in Basel: Internationale Kunstmesse Art 3 ’72, with text by Pierre Restany and Gianni Schubert. This and the following decade saw the artist consolidate his work with a vast production touching on various themes (the imprint of the body, space, time), means of expression, materials (wood, iron, wax, paper, bamboo). He rediscovered the value of handicrafts, and his sculptures expanded in space, becoming true creations of “places” (among recurring themes are those of dwellings, rooms, doors, walls, enclosed spaces, boats and screens).
The references to Oriental culture became accentuated; Nagasawa’s artistic language hinges on various themes: that of travel as a passage between different realities, the balance between visible and invisible, and the materiality of sculpture which becomes light and transparent. Nagasawa has taken part in many Italian and international exhibitions, both personal and collective, in public spaces: 1978, Florence, Palazzo Strozzi; 1982 and ’88, the Venice Biennale; Galleria Comunale d’Arte Moderna, Bologna and private shows: 1981, Galleria Sperone, Turin; 1988, Galleria Valeria Belvedere, Milan (with which he interweaves a constant artistic relationship with exhibitions in 1990, 1992, 1993, 1996) . These were followed by the Documenta show in Kassel (1992), the Venice Biennale (1993) – with a monographic room in the Italian pavilion – the Tokyo International Exhibition Center (1995, The Garden of the Seven Fountains, the first garden project of the artist), the Fattoria di Celle in Pistoia (Hyperuranium) and the Mirò Foundation in Palma di Mallorca (1996, Garden), Palazzo della Triennale in Milan and the Palazzo Pretorio in Certaldo (2001, The Garden of the Tea House), Milan’s Palazzo delle Stelline (2002), Modena’s Caffè Letterario (2003), Rome’s Galleria Arco d’Alibert (2004) and Nuova Pesa (2005) and Il Ponte gallery in Florence (Interferenza). In 2006 he took part in the 12th Biennale Internazionale di Scultura di Carrara and he exhibited at the Torre di Guevara on Ischia . In 2008 he made the work Giardino rovesciato for the museum park at the Medici villa La Magia in Quarrata (Pistoia).
Among the exhibitions in recent years, Nagasawa. Dove tende Aurora, organized between 2009 and 2010 in Japan, in Saitama (Kawangoe City Museum / The Museum of Modern Art), Osaka (The National Museum of Art), Kanagawa (The Museum of Modern Art) and Nagasaki (Prefectural Art Museum); Nel segno della Croce, Galleria San Fedele (Milan, 2010); Hidetoshi Nagasawa, MACRO (Rome, 2013); Hidetoshi Nagasawa, CAMUSAC (Cassino, 2014, curated by Bruno Corà); Sette Anelli, Renata Fabbri arte contemporanea (Milan, 2015); Vortici, Palazzo Ducale (Mantova, 2016); and Galleggiamento, Galleria Adalberto Catanzaro (Bagheria 2017, curated by Bruno Corà); Hidetoshi Nagasawa. The scuplture of the 70s, Galleria Il Ponte (Florence, 2019, curated by Bruno Corà). His works feature in the collections of the Solomon R. Guggenheim Museum in New York, the Middelheim Museum in Antwerp, and in Japan (the National Museum of Modern Art, Osaka, the Museum of Contemporary Art, Hiroshima, the Adachi-ku municipal hall, Tokyo and the Contemporary Art Center, Mito). He died in Milan in March 2018.