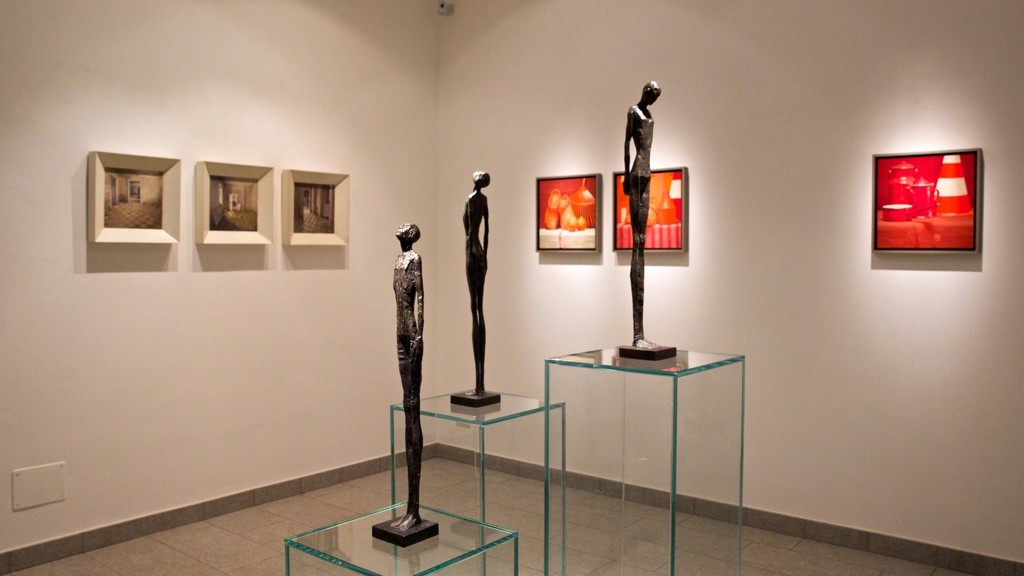 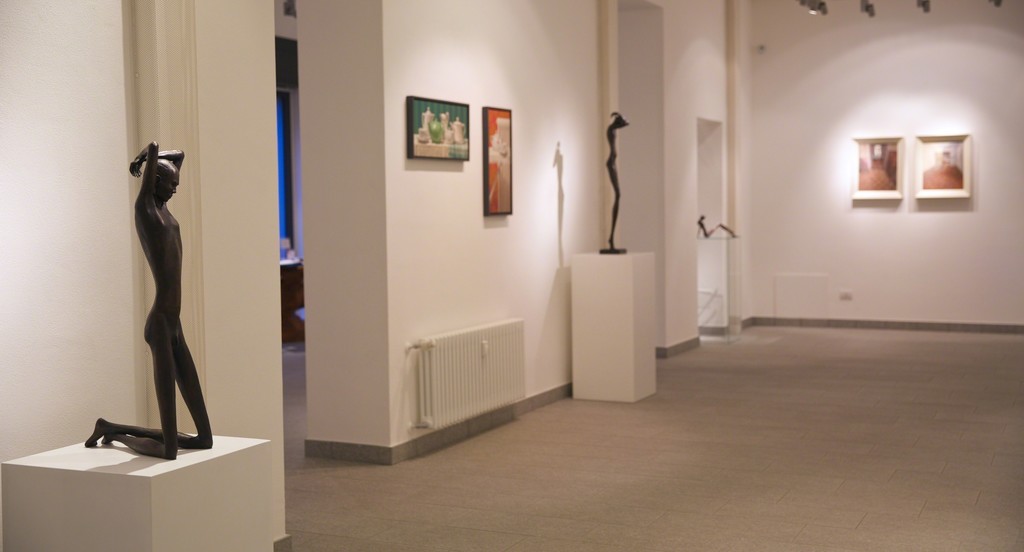 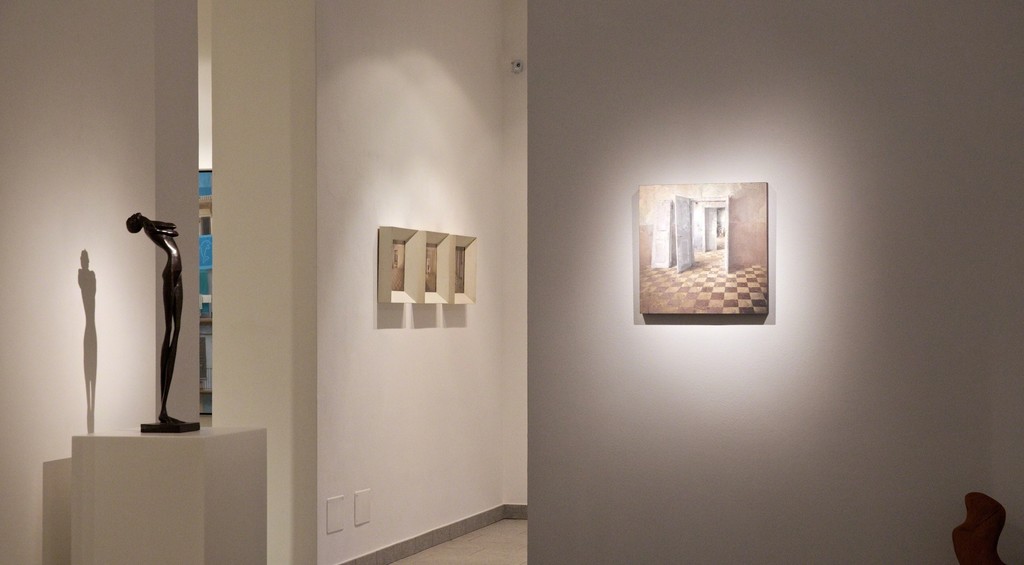 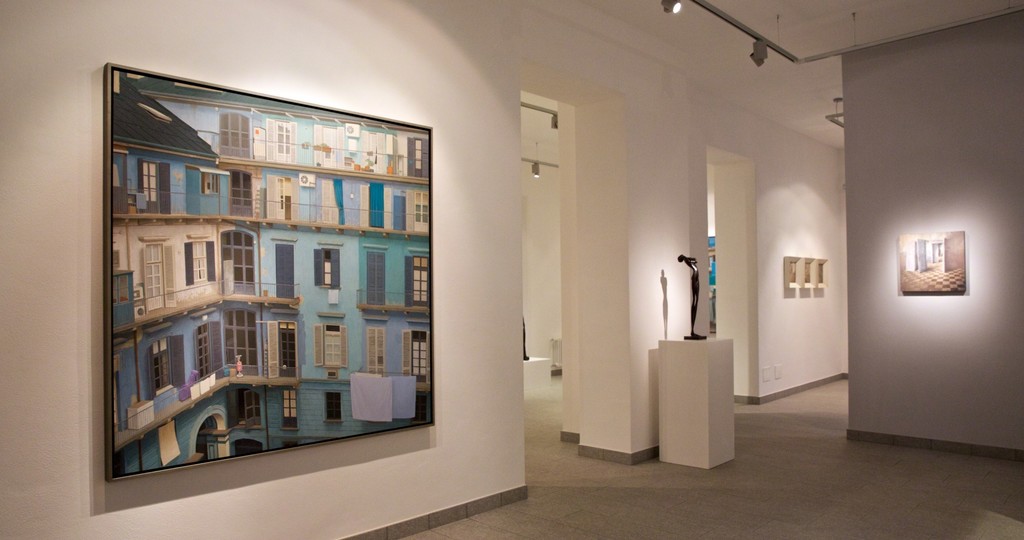 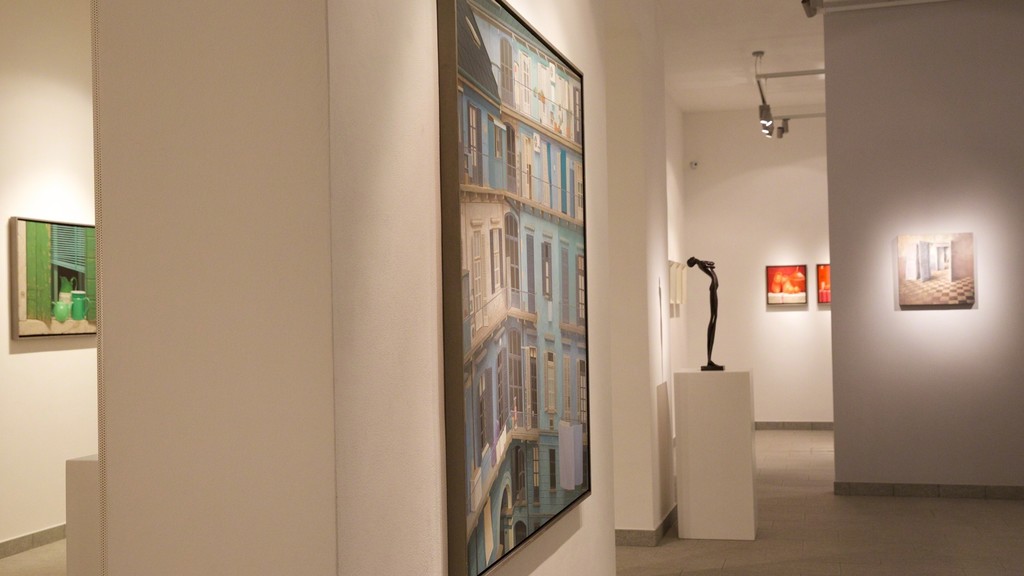 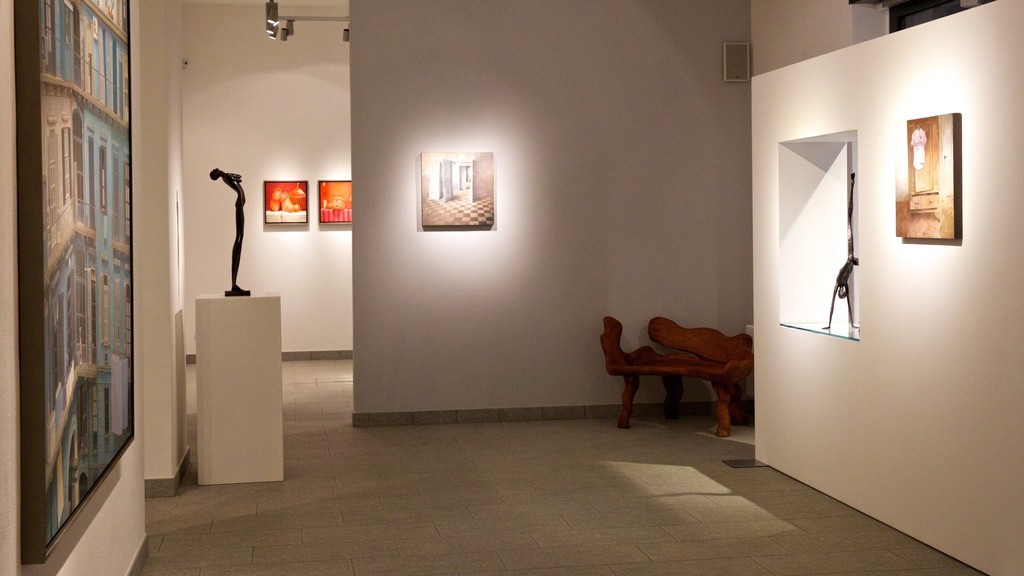 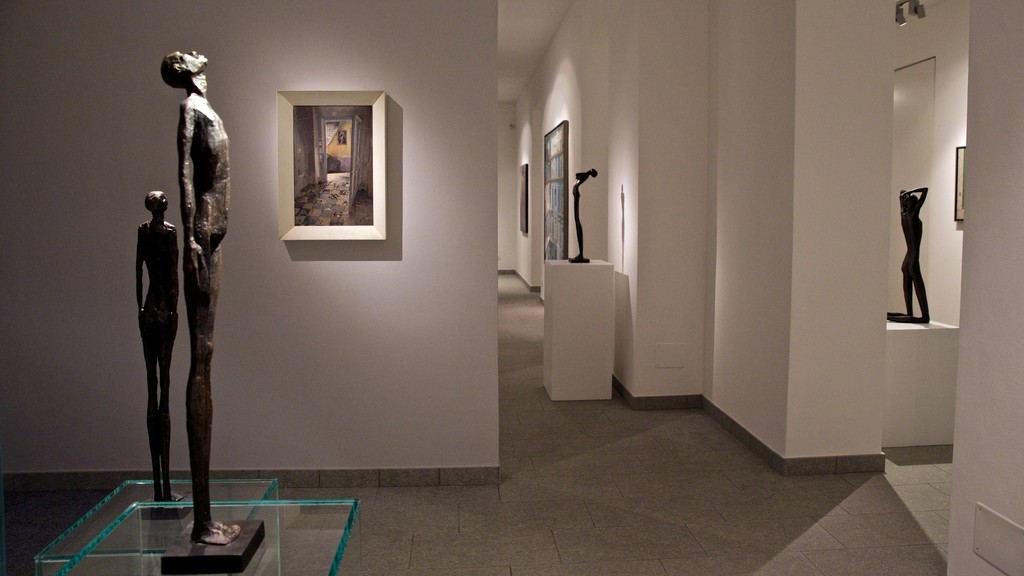 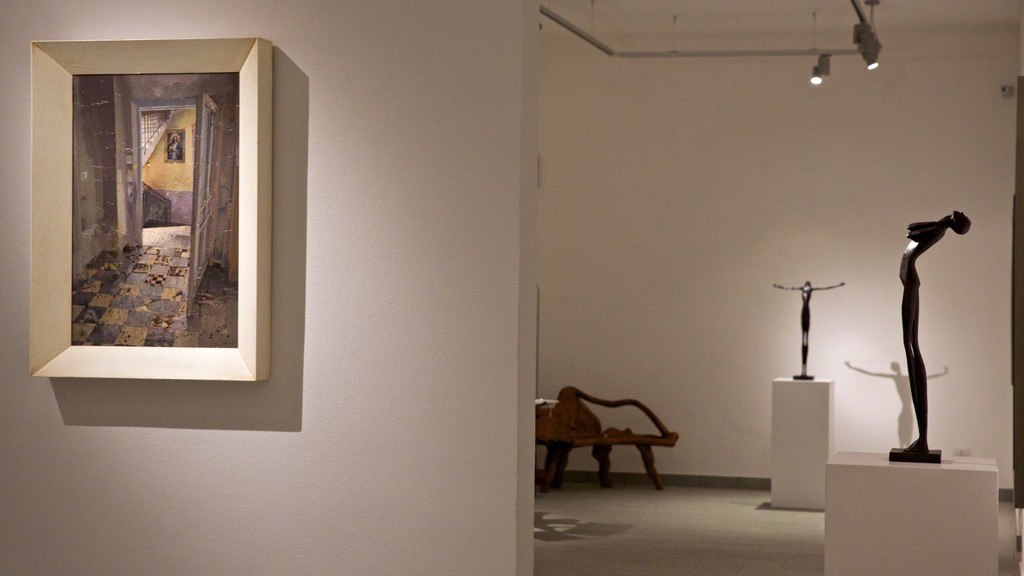 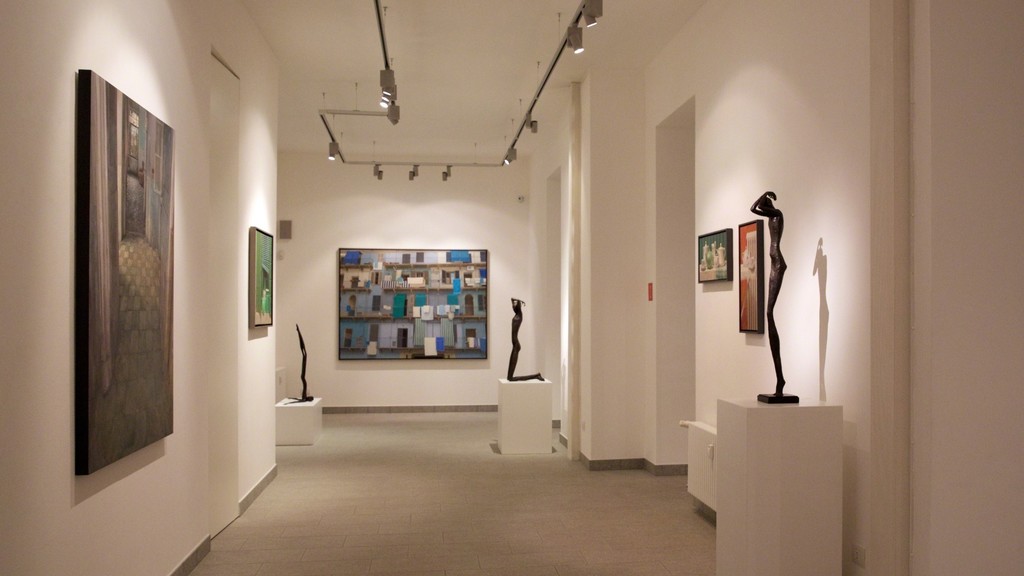 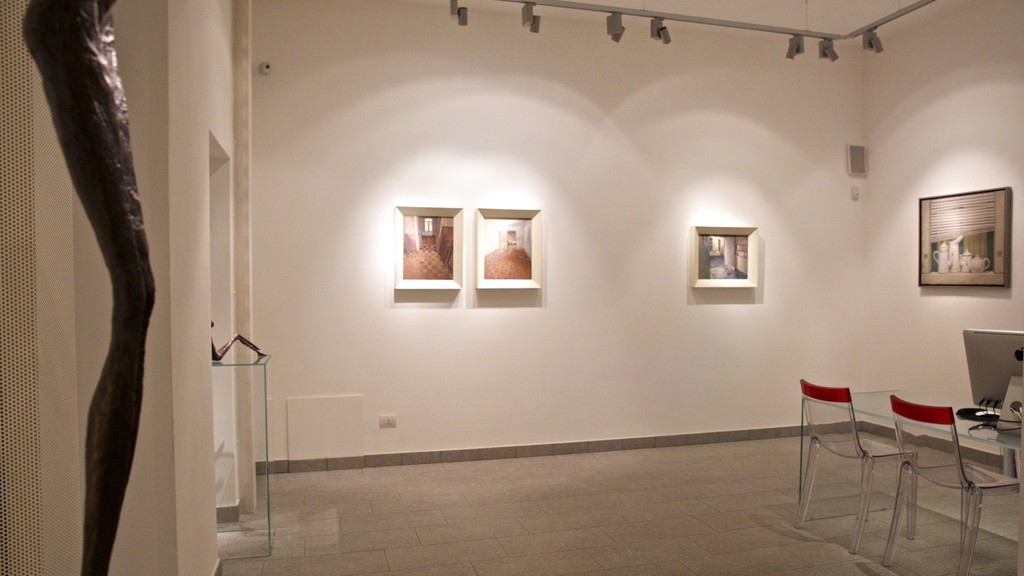 During the last part of this millennium, Art has deeply demonstrated his ability of deploying itself into different voices: form neopop to neosurrealism, passing through the last edges of a rediscovered figurativism, up to cultured quotations and the first wailings of abstract art. Among these voices, there is a cross group of artists who have chosen to express by subtracting. We are not dealing with a minimalism based upon void or fruitless geometries. We are approaching a more subtle and profound technique; the ability of carrying the audience through unexpected paths in order to answer some contemporary dilemmas.
These artists were able, through absence, to seize the essence, the roots and heart of reality.
Three artists of this kind were chosen for this exhibition. Two Italian painters, characterized by an intense existence, and a Swedish sculptor, whose works evoke a mystic poetry.
The rooms by Matteo Massagrande are enchanted spaces which urge to get lost. Empty chambers, deprived of any human presence and furniture. Nonetheless, their physical void is barely perceived, since it is filled by the deep echoes ringing among scraped walls and old tiles, by the soft and dusty light, by the invisible but powerful lives which crossed them.
Instilling a mystic meditation as the one which can be found into Gothic cathedrals -where light changes every hour, conveyed by the stained-glass windows and reflected upon the ancient floors- Massagrande leads us through his rooms, using his brush as a camera, thus offering long-lasting sequences which let us enter events whose plot can’t be fully seized.
As in Alejandro Amenábar’s masterpiece, The others, wherein walls and rooms own the same expressive strength of the protagonists (and light is the main character - deeply dreaded at any spreading of the curtains-) or as in some Hicthcock’s sequences, even if within Massagrande’s works the painful wait is replaced by a placid curiosity. This is why, Massagrande can be also seen as a story teller. His stories are ruled by slow rhythms, he donates us the moment, captivating us, yet letting the audience imagine what happened and what is next. He depicts an eternal present, which is clearly perceived during the fruition.

Paolo Quaresima’s world is less whispered, rather conceived as a powerful musical score. A symphony lead by brasses. Massagrande’s void disappears, replaced by the beating vitality which fills the painted objects.
As a matter of fact, the shining carafes, the bottles, the shirt left on a chair, or the tablecloth and the box marked by a famous liquor brand, are alive and breathing, deeply staring at us.
Quaresima’s works recall that Italian painting rooted into Renaissance which survived the most irriverent avantagardes; he provides exquisite portions of reality, yet dismantling our perceptive certainties, starting from the use of colours.
One of the deepest visual satisfactions of his works is provided by the chromatic harmony. The blue dishes upon a lilac tablecloth, the green hues placed upon a green shutter, the windows and balconies which match the clothes hanging outside, move our intimate feelings, awakening our need for order and our hope in a perfect world.
The contrast between this chromatic artificiality and the tangible images produces a binding short circuit, which is accentuated by the artist’s decision of gifting each object with the same pictorial relevance.
Whether it be the vase hit by the light or the almost indiscernible fold upon the tablecloth.
This technique forces the glance to get lost, focusing upon each detail and voice. Man is replaced by objects, which become alive presence, autonomous and assertive life forms.

On the contrary, man is the protagonist of Johannes Nielsen’s works. Deprived of any cloth or decoration: plain body. A body which resembles a skeleton, an archetype, an idea. Inspired by the hieratic figures by Alberto Giacometti and the flexible bronzes by Degas, it seems to leap ahead, like Marino Marini’s horses, thus representing the aiming towards a superior order.
Whether it be knelt praying, staring at the ground, or almost at attention staring at the sky, or spreading his arms, it always seems absorbed into a secret dialogue with an above entity.
Through the undressing of the figure, the artist reveals its soul, its spiritual essence. Even when the subject is accomplishing a laborious exercise, as if it was caught at the end of a dive, with the legs thrown backwards and the arms spread as wings, it expresses the desire of overcoming a limit.
The artist imagines his subjects as if they were trees, visualizing buds and branches growing from their limbs to the sky.
One of his figures perfectly represents this kind of poetic. It is a body which, like the others, is not characterized by specific sexual connotation, but it seems to be a woman, due to the softer profile of the leg and that cosmic embrace, which seems to hold the whole world.
A votive statuette which comes from a distant future, wherein genders mingle within a unique harmony, thus embodying an intimate and solemn prayer. While the arms surround her breast in a protective gesture, the back stretches backwards, whereas the head points upwards; the face aims at the sky, almost seizing it completely, while the throat unfolds into a silent chant which is pure soul translated into voice, something so absolute to astonish the audience.