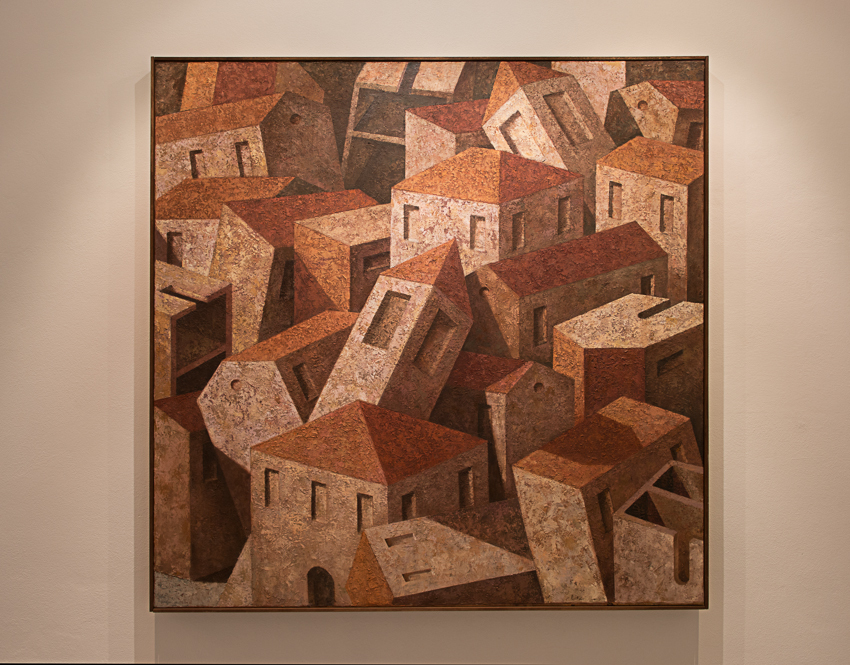 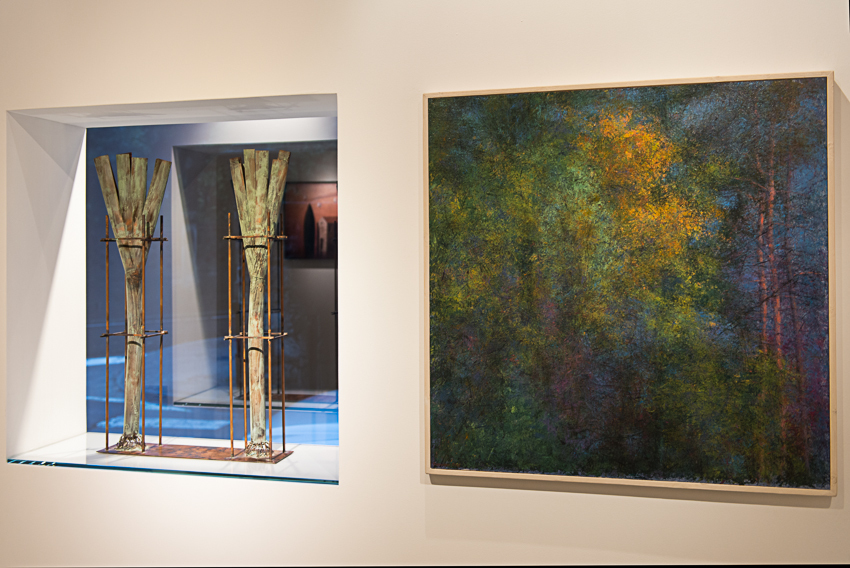 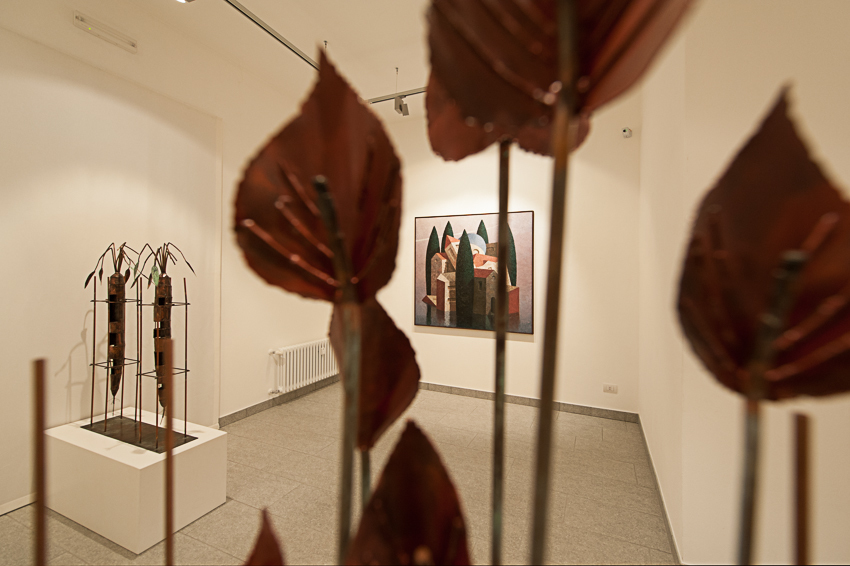 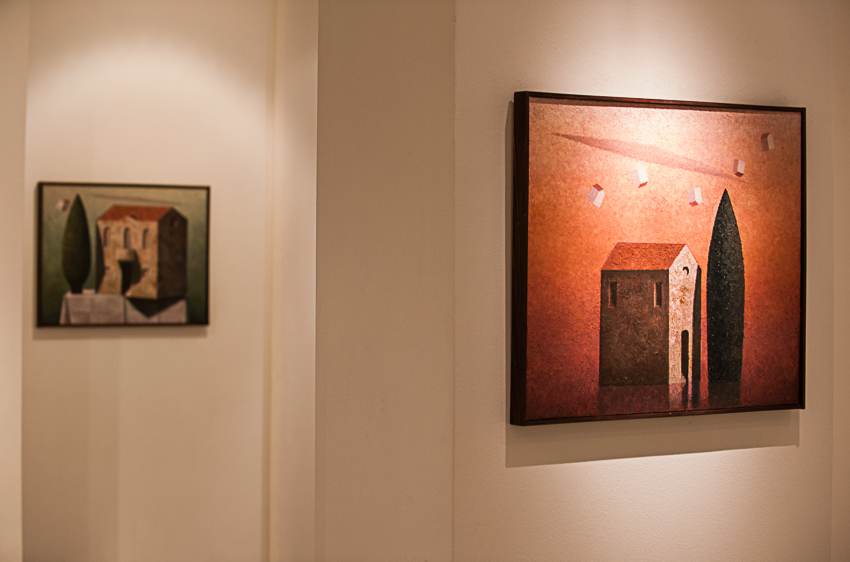 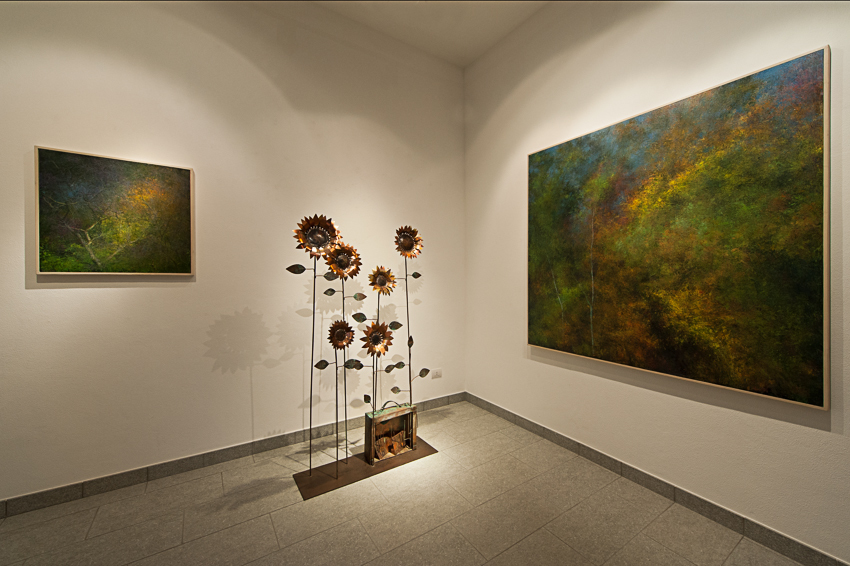 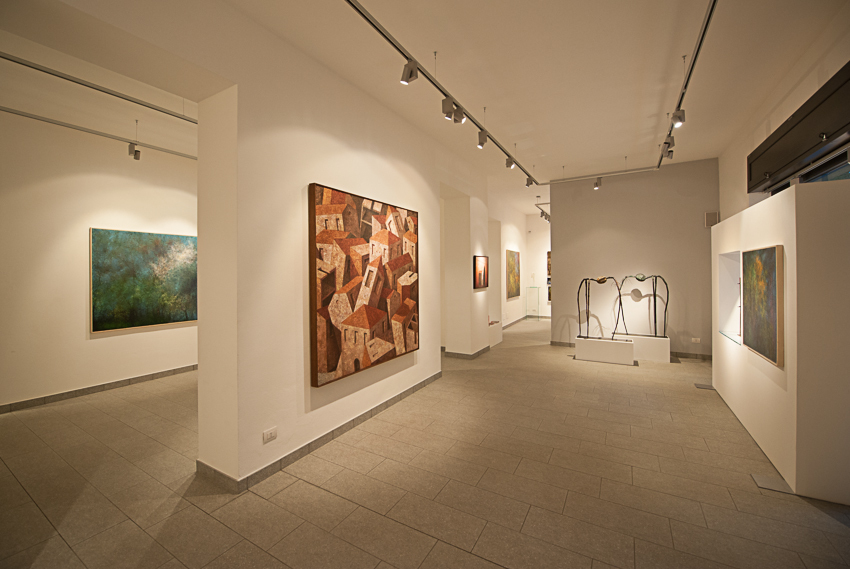 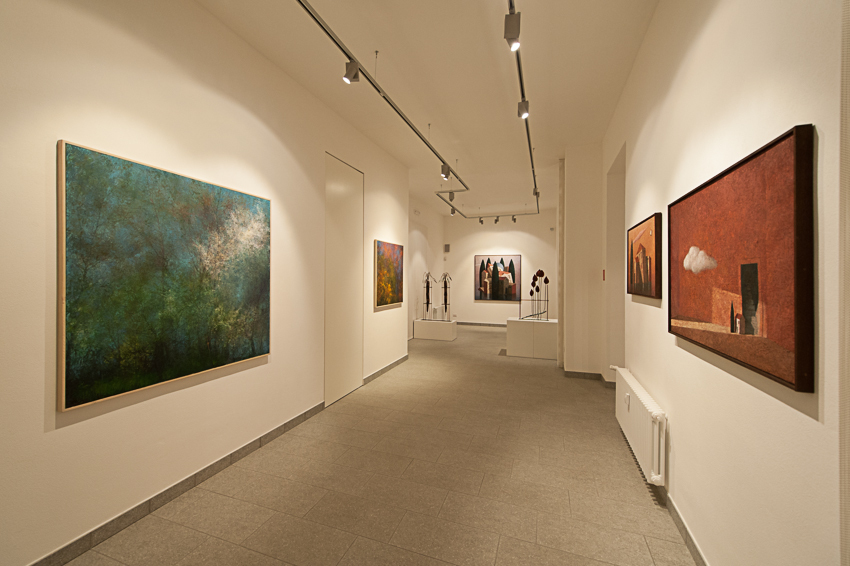 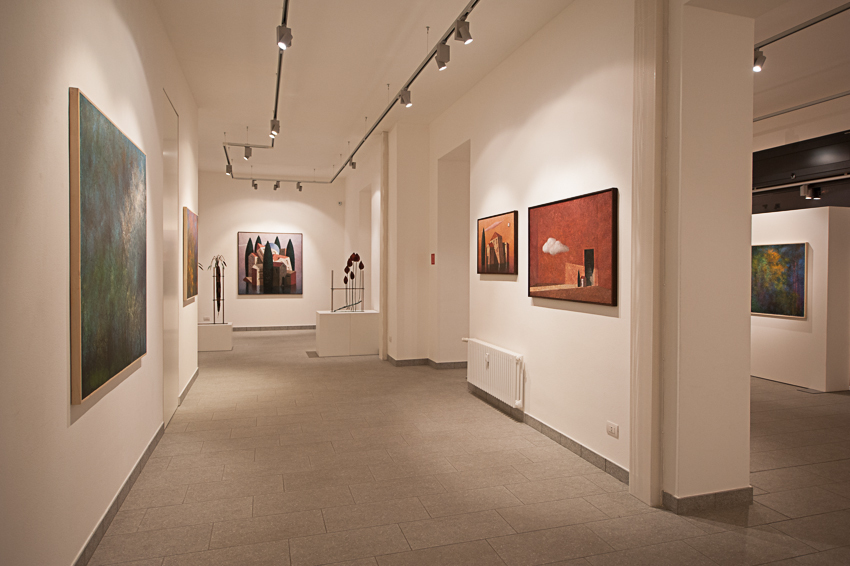 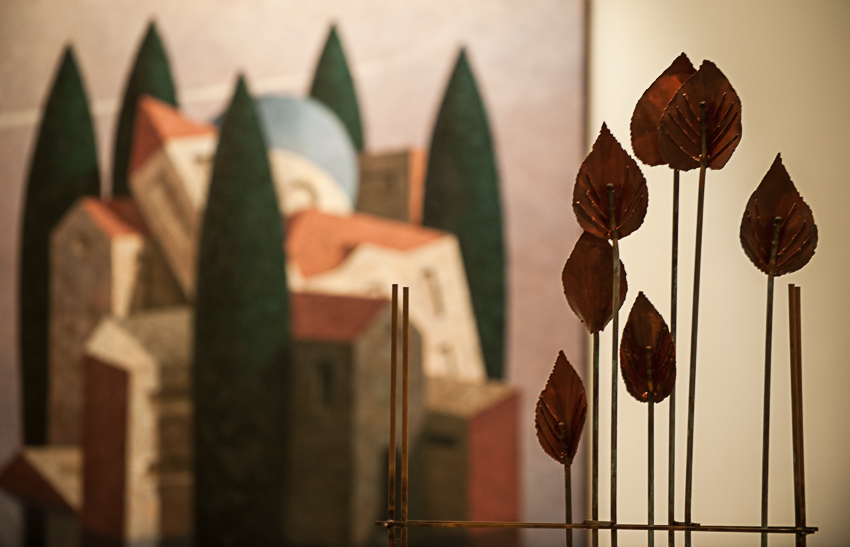 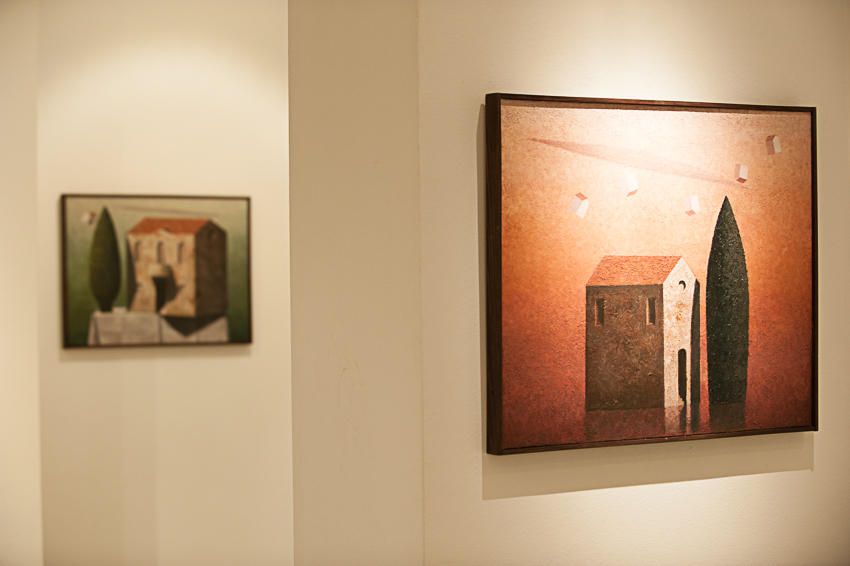 According to Greek mythology, Chaos was a primordial entity, a huge and undefined nothing, an abyss. A void from which all divinities were born to give life to the world. Only through Plato, Chaos began to be intended as a messy mixture, the “refuge of original unformed matter” from which - thanks to a ruling principle – the world (cosmos) was created as an ordered reality. The conflict between order and chaos is a fundamental part of human nature and it guides his analysis of reality. As a matter of fact, most mythologies consider this dichotomy as the original reason. Whereas, beauty within chaos belongs specifically to art. It is the discipline chosen to destroy certainties and underline the charm hidden into what should scare us.
Arcangelo Ciaurro's works are based upon the research of this kind of beauty. His trees acclaim both the magnificence and perfection of creation and the unpredictable and wild beauty of Nature. His painting is made through passionate and feverish gestures, which fill the canvas as a germination. Even if the starting point is a real image, the painting procedure leads to a crawling confusion, which seems to contain the whole energy of the universe. As if Ciaurro had chosen an opposite role in respect to the Creator: instead of turning chaos into a rational and understandable context, he aims at freeing the wild, primitive, insane, unclassifiable and unpredictable side of Nature. He narrates the meaning of life, through a vortex of colours, vibrant spots, hypnotic and moving lights and representing the infinite sap's flowing, the succession of seasons, the slow breathing of leaves and the storm which shakes the crowns through lightning and reinvigorating rain. The importance given to the field lines within the painting is so deep that the artist chooses only squared canvas, thus avoiding any distraction during the fruition. Ciaurro's works can be intended, upon an aesthetic level, as a constant march towards abstract, and according to a symbolic interpretation as the glorification of a primordial and perfect Nature, completely autonomous from mankind. A chaotic harmony which can be disturbed only by human presence.
On the opposite side, the tamed Nature by Mario Branca. Human glance and his spasmodic need for order rule his metallic vegetation, fixed into geometries and symmetries. The sunflowers face the audience as a platoon, the huge carrots rise, even if almost caged into a mirror game. The pumpkin itself, apparently more free thanks to the sinuous movement of the shoots, is represented through a choreographic perfection, as if its curved lines were the result of a complex calculation.
Mario Branca is a naturalist, his atelier is filled with botanic essays and books upon plants; his love for Nature also guided his life choices. Born in Milan, he actually lives immersed in Nature. 'I love Nature and its illusory order, however sculpture must originate from a praise within silence, it is a balanced and calibrated construction'.
A balance between order and chaos. Between real and artificial too, as metal turns into a smug, shining, rigid and sharp vegetation. Moreover, each sculpture arises several and different suggestions. Like the pumpkin, real yet perfect, even if a little enchanted, balancing between Cinderella's story and Halloween's tales. Wizardry seems to be used also when Branca enlarges or reduces the objects, or when the sculpture is represented as a vertical panel, from which the foliage irrupts as a benign invasion, as to say that even if created by a superior order, the lack of discipline within Nature is unbeatable.
While Ciaurro focuses upon a primordial and uncontaminated Nature, and Branca suggests human presence within his geometries, Matthias Brandes lets man enter his works. Man's presence is clear, strongly declared by the human architecture. Within his stony landscapes, where everything seems to be built through mineral and solid matter, chaos originates from the choice of narrating reality as a fable, filling it with magic realism and poetry. Nature lies in the background. The trees, the leaves, the fresh vibration of the wood are denied, transformed into simulacrums of a tree, whose trunk is represented as a perfect cylinder and the foliage seems an impenetrable sphere, or into stiff cypresses, as sharp as scalpels. However, this world which seems carved rather than painted, thanks to the tempera mixed with oil which adds extraordinary tactile effects, isn't at all cold and hostile. Even if crossed by narrow roads, those timeless villages, whose buildings are so close one to the other to resemble scared sheeps during a storm, invite to discovery, to visit them through imagination and fantasy. As those blind houses and those poky entrances draw the audience towards them, instead of rejecting it; they challenge bravery and need for research, as inviting as Alice's mirror and probably as deliciously dangerous as it was. Also the trees invite to plunge our hands within their crown, to open a way through their compact leaves, in order to discover whether also the birds and squirrels are made of solid geometries, as if they were escaped from a 15th century fresco. This chaos, as pacified as the calm after the storm, is filled with houses overturned by a earthquake which left no traces (it turned and clumped the houses, yet leaving them intact) and should be defined as a calm chaos, as reassuring as a redemption or the healing after a illness. It is like opening a window within a Morandi's painting, letting the storm crash his bottles, jugs and teapots, knocking them over the white tablecloth, without replacing them. Nonetheless they preserve their iconic regality and their perfect and absolute calm.