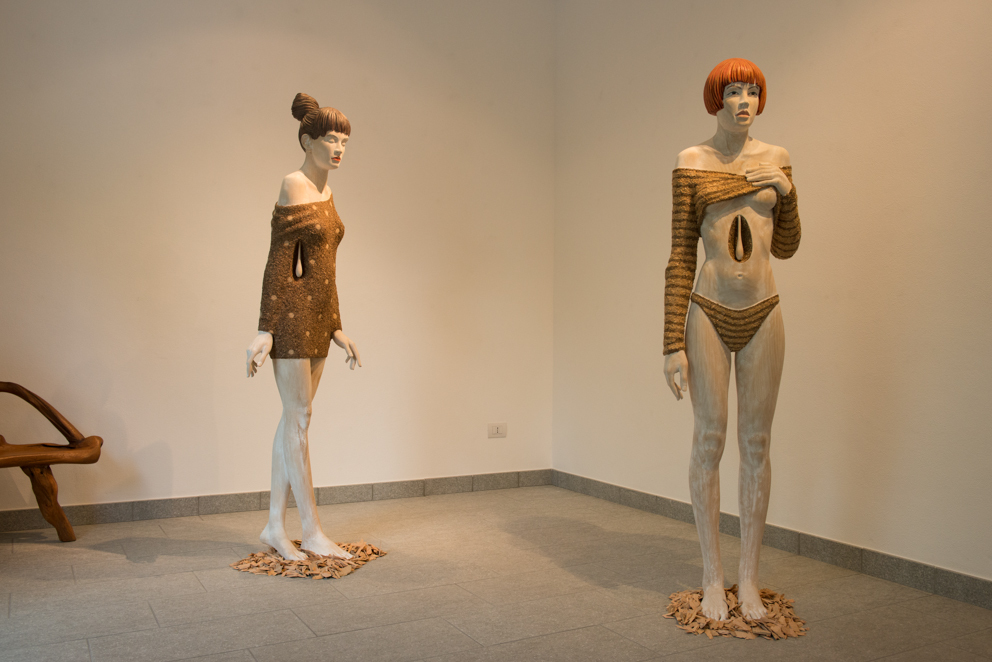 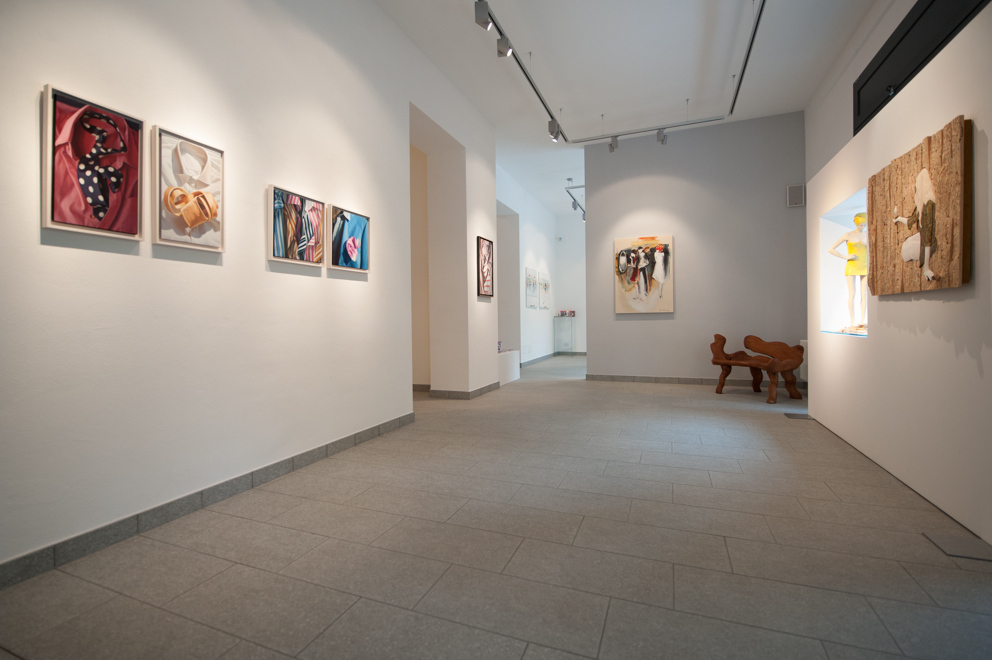 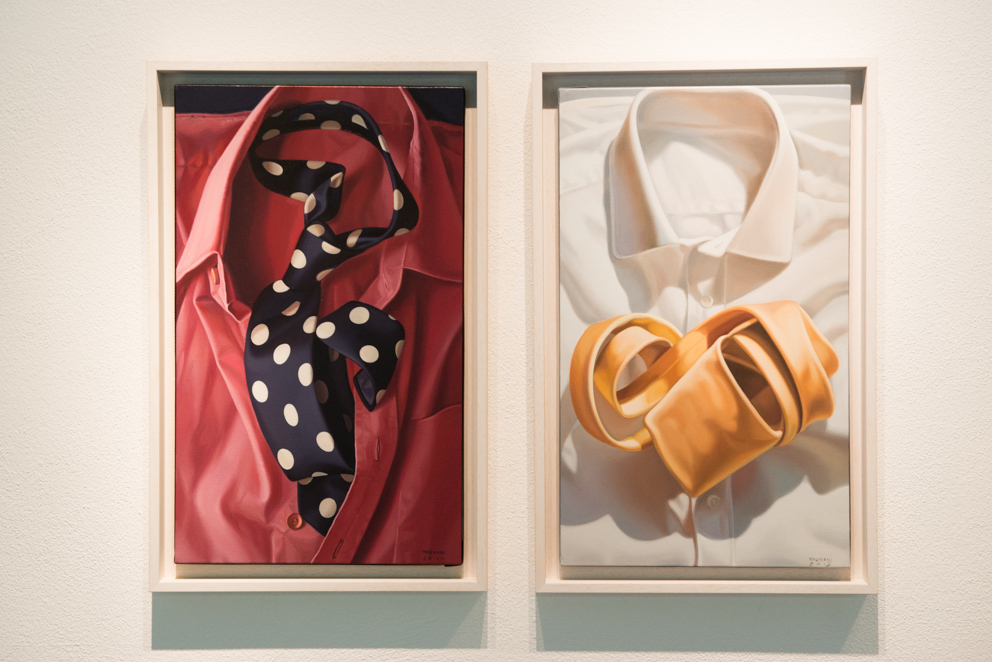 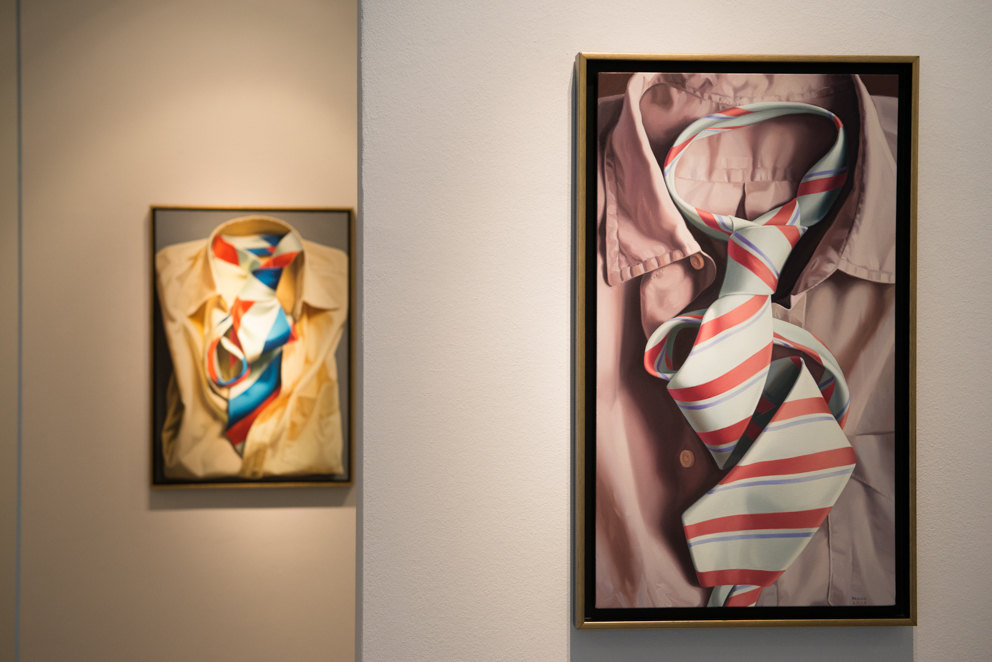 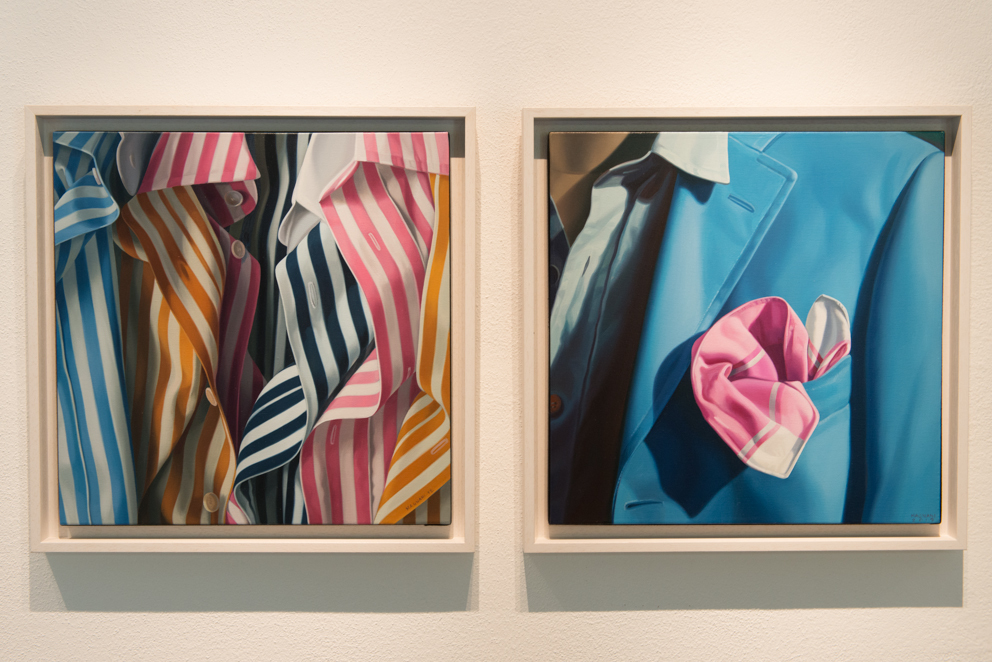 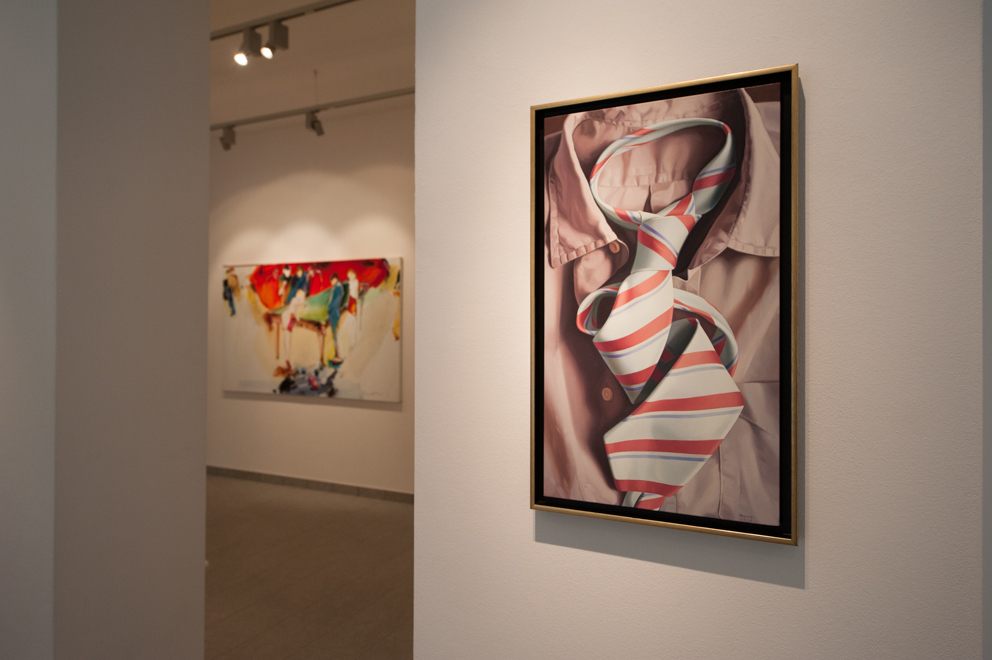 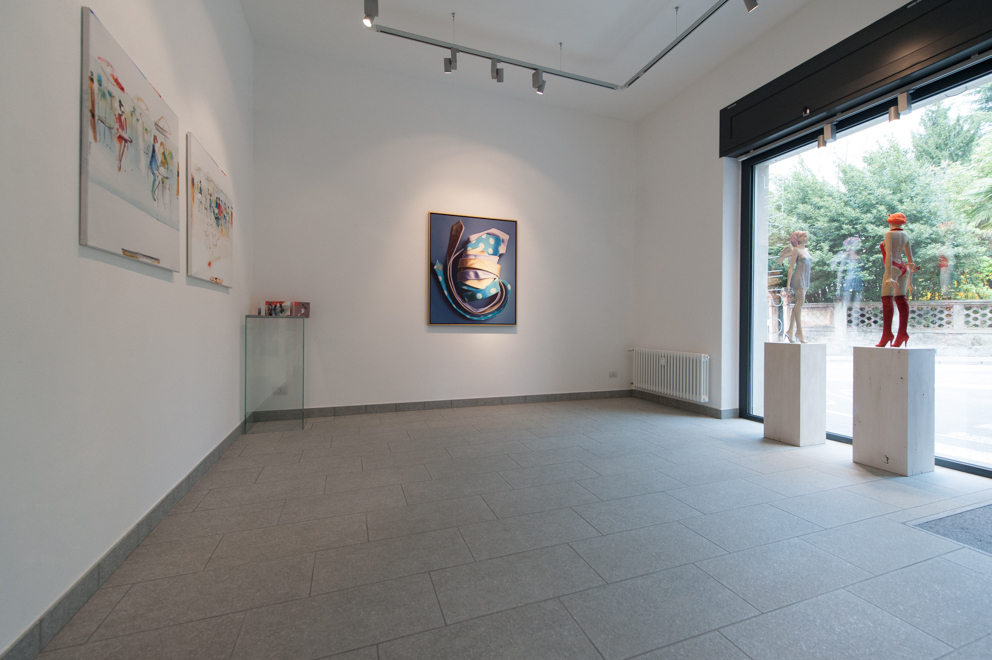 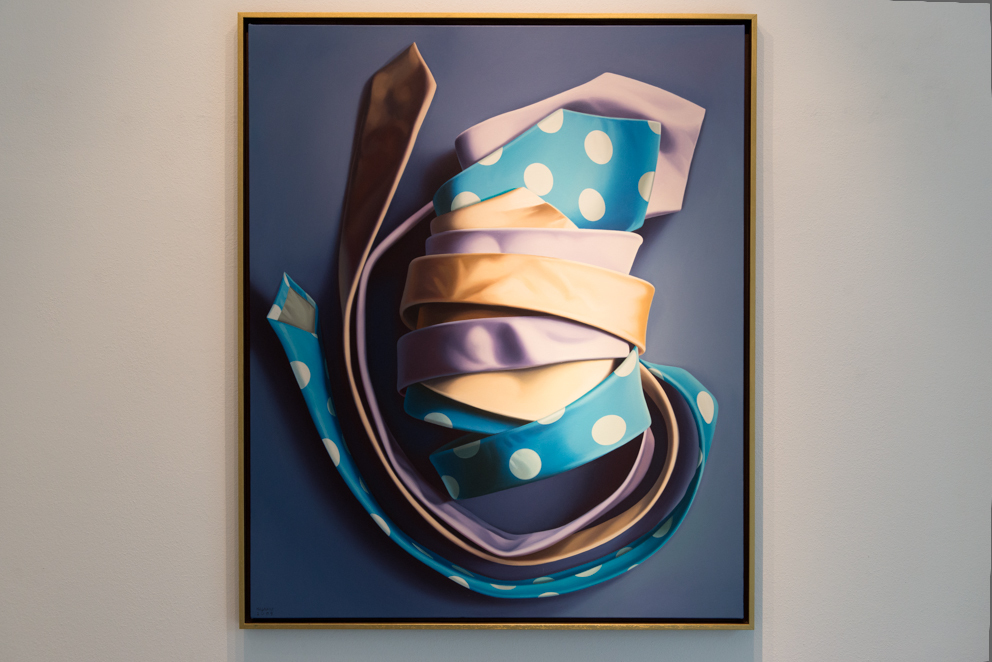 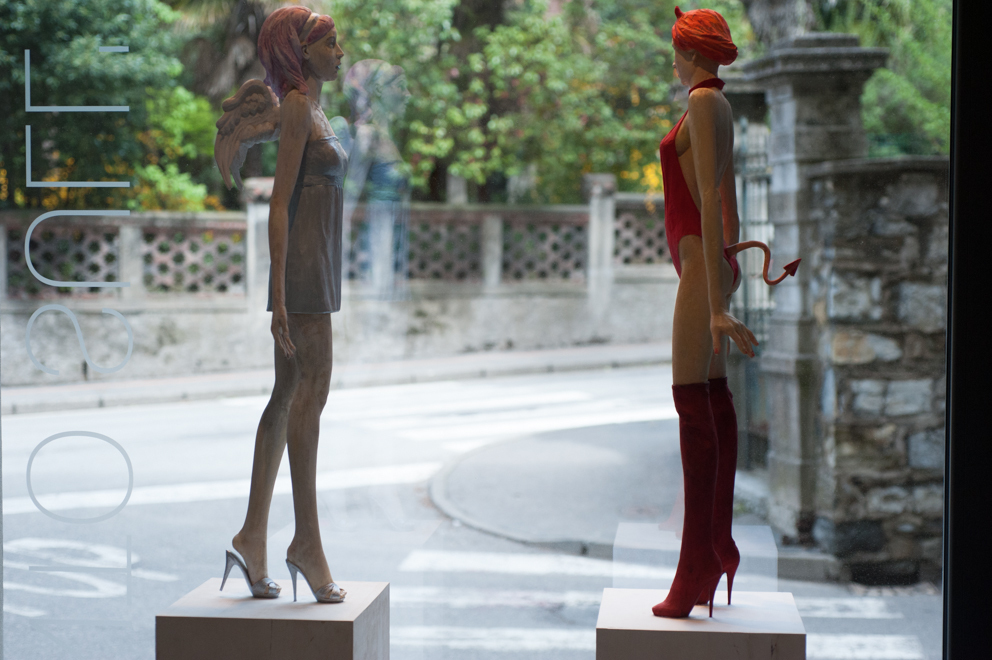 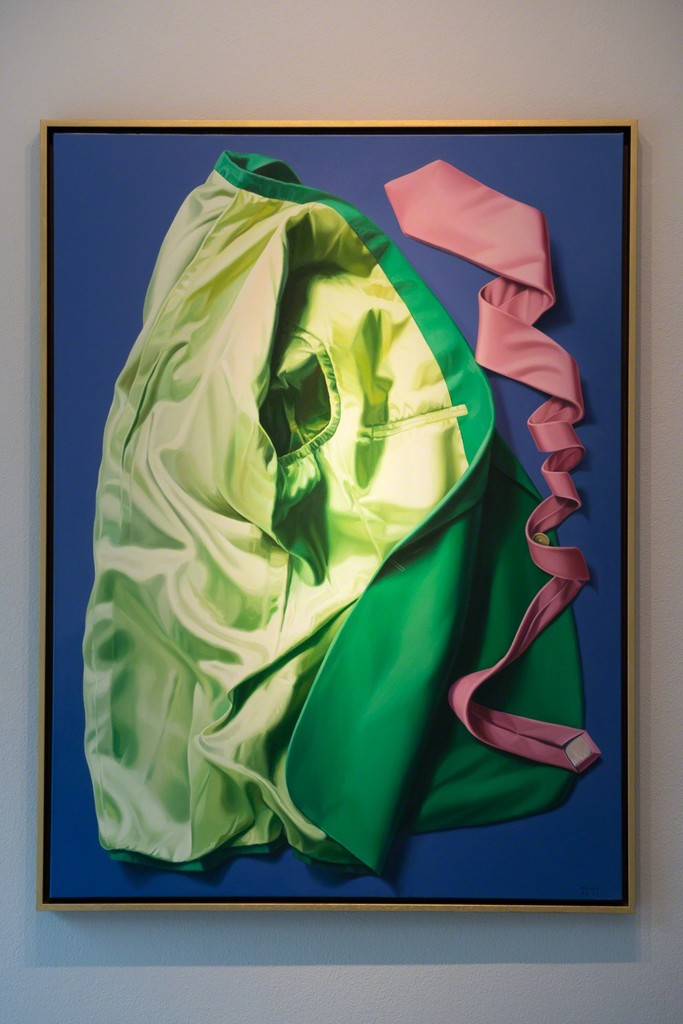 A triple solo exhibition which can be read as a long trip around mankind. Three different artists with distinct languages and personalities –apparently antithetical- become the three telling voices of the same fascinating story. Since man is definitely a tridimensional figure, it is flesh and bones. However, there is more. He is also formed by the volatile and fleeting products of his mind, made up of his own associations of ideas, personal yet codified within a language of symbols and references which, from Freud on, has become universal and globally accepted. Man is also constituted by what he touches, by what he modifies through his touch, which identifies and defines his nature. He is what he gives shape to through his body, like the clothes he wears.

Like the sculptured bodies by Davide Balossi, life-sized statues, solid and assertive in their way of claiming our attention, gazing at us. Evasive eyes which suddenly avoid our glance, taking us into a maze of secrets. Wood is the material chosen by Balossi, mainly because he likes and knows perfectly how to handle it. Secondly, because wood is a living and beating, breathing and scented matter. His curvy girls dialogue with our look and olfaction. And our touch too. It is hard to resist the temptation of caressing their sinuous bodies, following with the edge of our fingers the grains of the wood, touching the rough matter of their clothes, often made up of wood shavings, glued together with maniacal precision. Balossi’s girls are mainly bodies. But they have a soul too. A spirit, whose sufferance and anguish ooze big drops. Bursting coagulum of emotions burst from their bodies. The perfect beauty adored by Balossi (as the enchanting clavicles of the feminine figure E’ meglio non vedere demonstrate) seems wounded, interrupted by a sudden formal shake which deprives the audience of any point of reference. Even more wrong-footing and moving are the figures of Lacrime profonde I and Lacrime profonde II. In these works the perception of reality suggested by the actual height, is strongly contradicted by the choice of attenuating the body, turning it into a column of matter until even the arms are left out. The hieratic gaze and the big feet rooted to the ground characterize the subjects as two pagan idols filled with primitive force, stalagmites of spirit, solid formations of pure soul.

Soul, spirit and psyche also fill the paintings by Paul Kaminiski. Not only for their instinctive and immediate roots, their dancing strokes which reveal lyrical-abstract temptations, but also for their oneiric subjects and their assonance with the themes of Surrealism. From an elegant scripture, imagined as a scenography and translated into strong –often pure- colours, a central figure with closed eyes arises, surrounded by a frantic yet decipherable whirl, which explodes into a dynamic perspective game, filled with symbolical objects, like spheres, game cards, multicoloured birds, mirrors or huge chessmen. It is like entering a hidden room, being invited to a dream and challenged to reveal its inner meanings. Another reality is shown when the artist choses comprehensive views, groups of people at the restaurant or gathered within amusement places. In this case, the brush is faster, more vibrating, impressionistic. The group is the main character, intended as the owner of a unique choral spirit. More frivolous, apparently, more mutable, even melancholic at times, but still created through merry and joyful counterpoints.

Like the cheerful, yummy, sugary and psychedelic colours chosen by Alberto Magnani, to show us his personal and enjoyable interpretation of man. Timbric and crystalline hues: purple, crimson, yellow, light blue, green. Compact and enamelled, never even stained by the idea of soil. Years of experience in the United States and a profitable proximity to Pop Art allowed him to gift this movement with something it didn’t own: a soul. Into his empty objects at first and then inside the amazing series of garments (shirts, ties and jackets, mainly) man is always there, like a print, a remembrance or an evocation. He is the icon hidden within the folded shirt gently placed on a shelf, the thinking soul into that string of hanged shirts (so alive that they almost jostle or chatter in the wardrobe). Even when the artist seems to abandon himself to the abstract temptation and looking for his subject, he throws the clothes upon a plane, almost disdainfully, to seize the secret folds originated by casualty, man is still present, unavoidable, ambushed, concealed within the fresh texture of those refined fabrics.