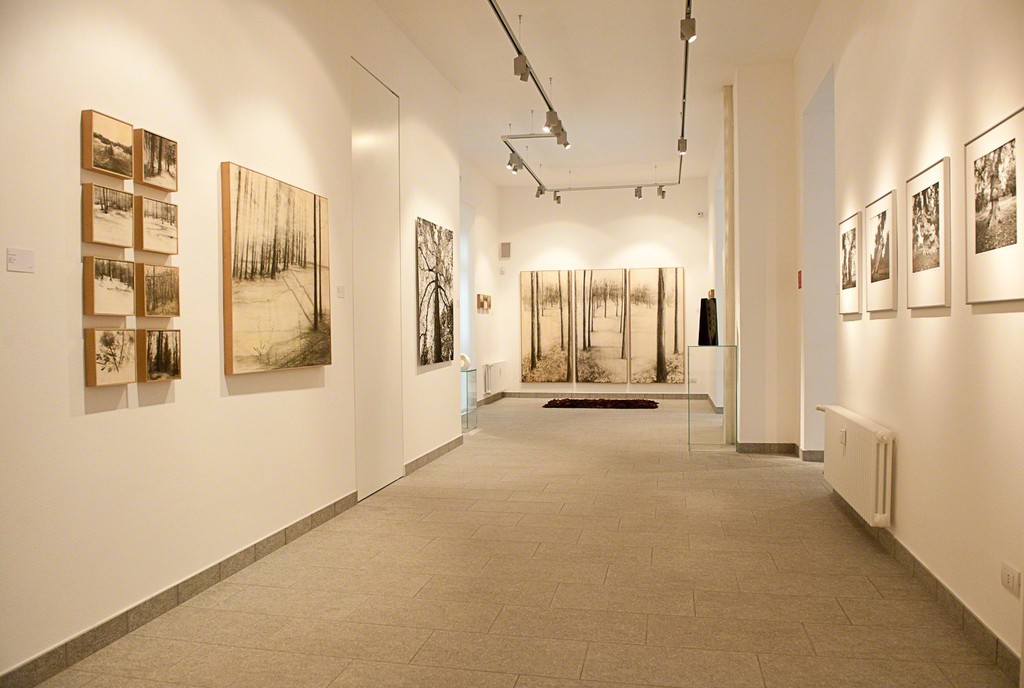 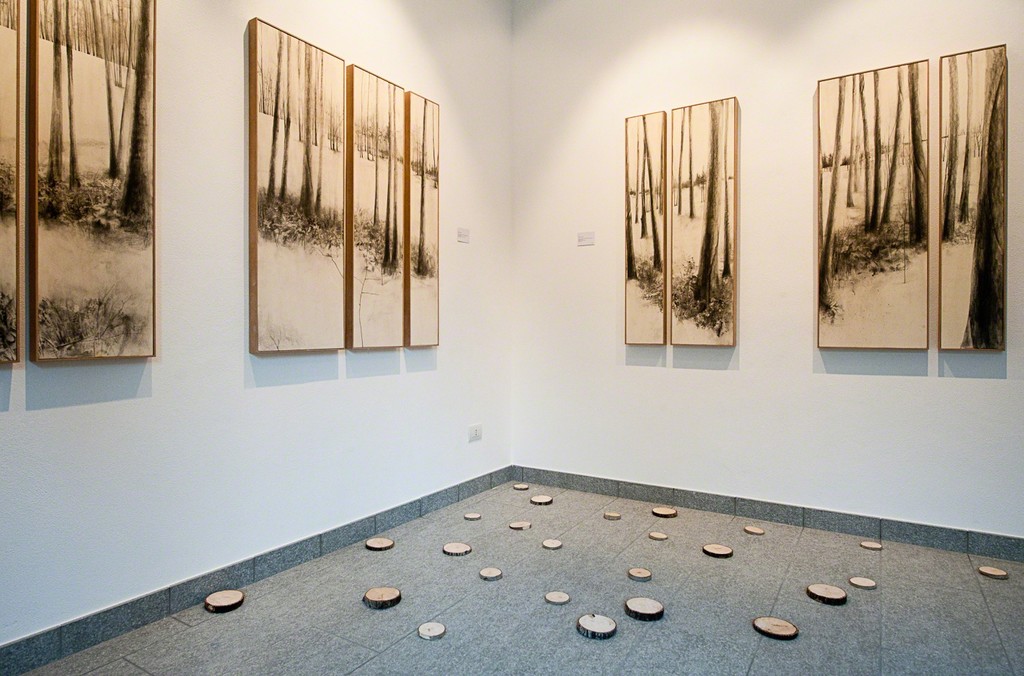 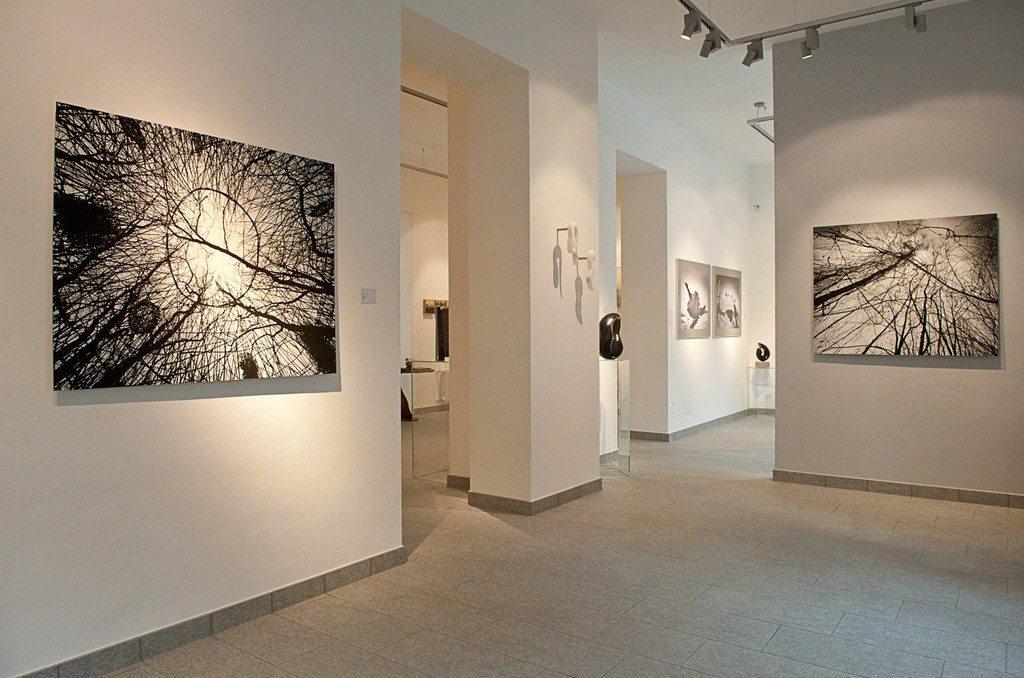 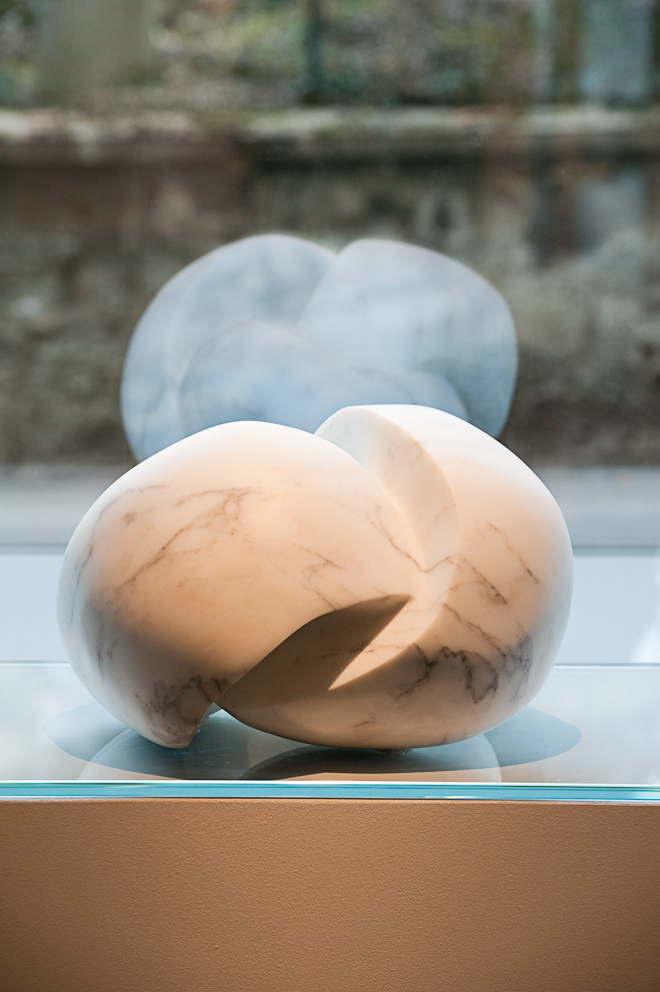 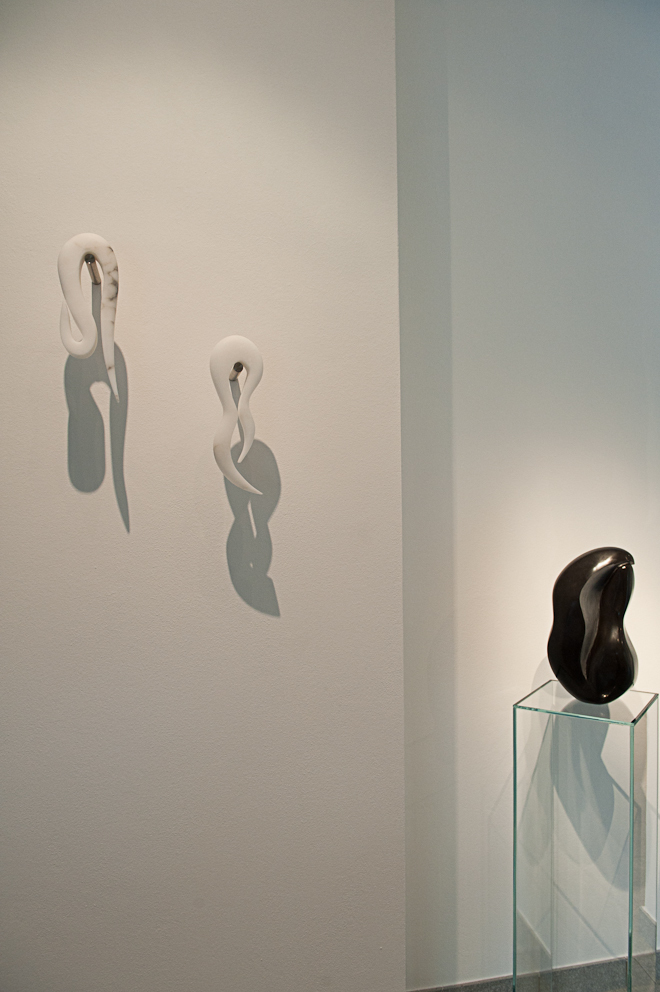 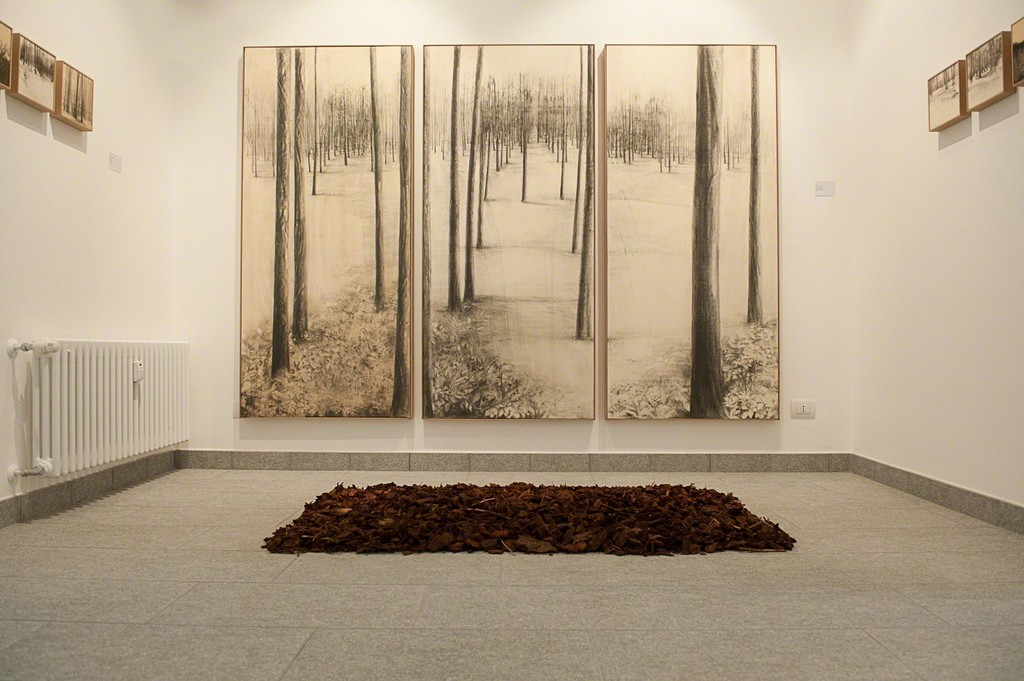 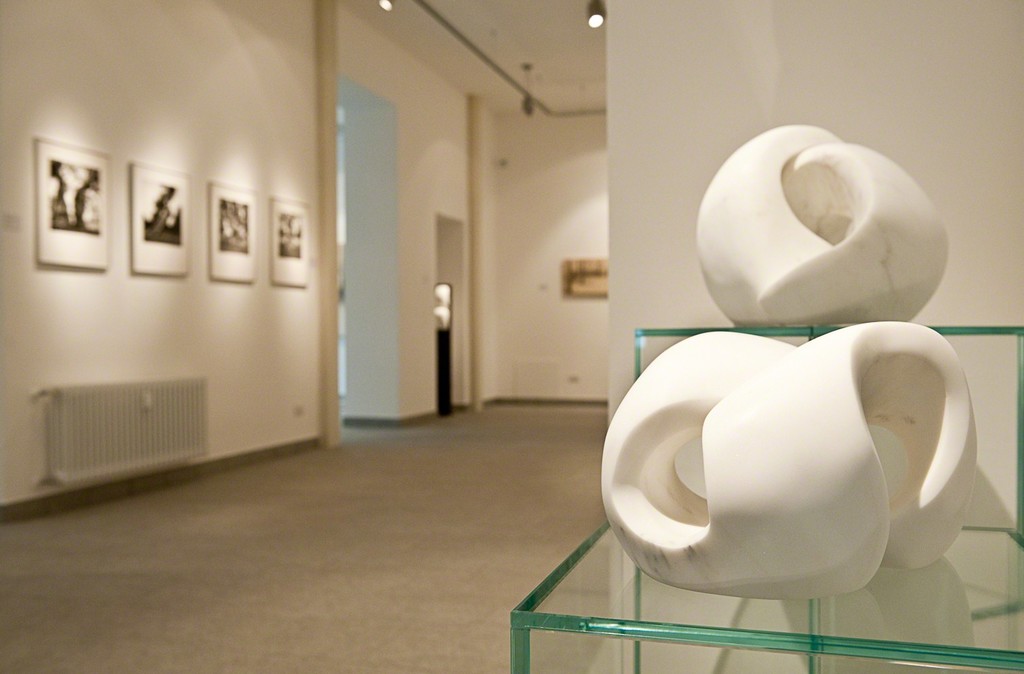 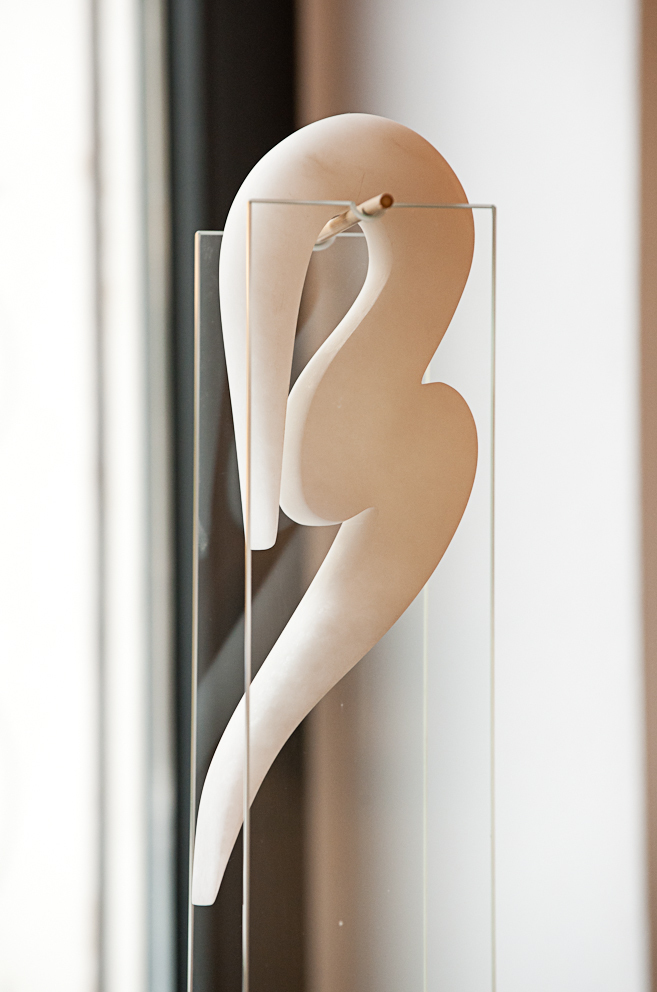 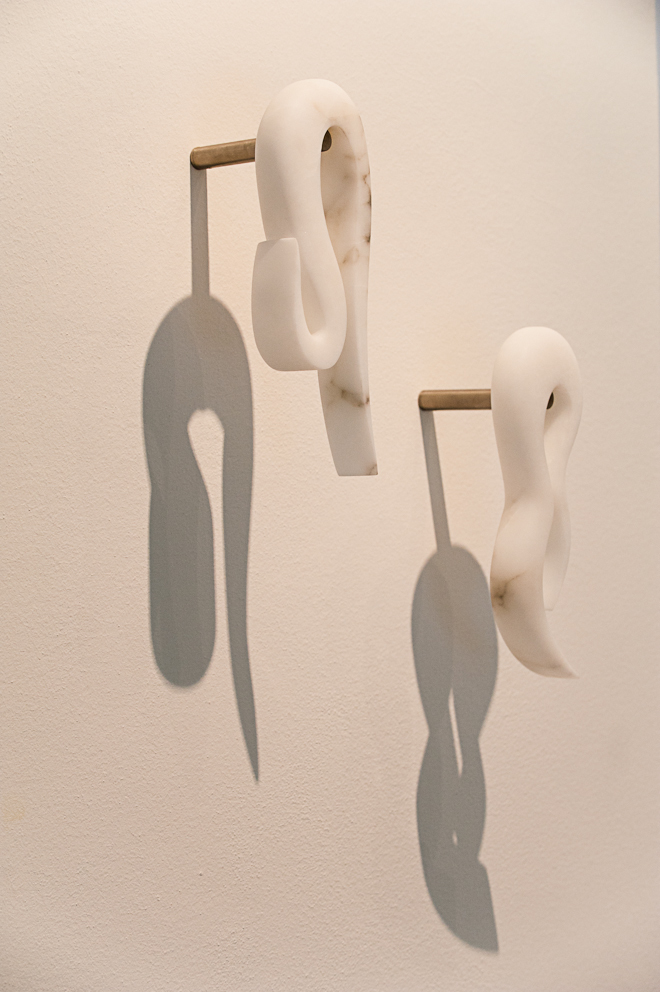 Paintings, photos and sculptures: black and white impressions marking the steps of a path which discovers the multiple choices through which Nature can reveal. Silent woods inhabited by an effluvium of whisperings; forests, cliffs and rocks altered by time and atmospheric agents which assume human forms; marbles apparently inanimate which come to life through the moulding.

Penetrating through M/ARBRES, the audience is invited to walk, look around, get lost in the forests which Marika Vicari has drawn with graphite upon poplar boards, a photosensitive material, whose particular venations determine the composition of the subjects. Works which seem to speak an universal language, able to reach the inner truth of things, the one discovered by the wayfarers who start a journey within Nature. Landscapes which aim at being a road towards something, like a sort of experience, forests ruled by silence where there is no place for man who, through his role of spectator, becomes in the end the director of the action. A tour studded with little clues to understand better what is set aside this voyage: the releases by Alberto Bortoluzzi linger to seize the various forms through which natural elements show to human eyes. Works which are defined abstract by the artist himself because, despite their simple outlines, they hide something different, collecting primordial signs – like the geometrical forms inscribed in the structure of the portrayed subjects – inner speeches which led the lens to pause over precise details that the author manages to capture where only scrub or endless landscapes can be seen. An allegory of life underlined by the photos of rocks and cliffs transformed by the atmospheric agents, whose forms can be interpreted in numerous ways, elements apparently lifeless which acquire almost human features, full of beating life. The marble sculptures by the American artist Jill Höjeberg are light, almost impalpable, and create smooth and suspended forms which, even if abstract, remind the softness and grace of female bodies. The artist shapes in the hard rock all her joys and dreams. Through her thoughts she sculpts the rock into sinuous and nimble forms, almost elastic bearers of secrets, which create a simultaneous bond between human feelings and physical shape. Nearly an oxymoron between the delicacy of the lines and the physicalness of the matter employed. M/ARBRES cast us through a walk sprinkled with works which, like pebbles, map out the way to the thought of difference as temporal deferment. Pieces of art forcing the audience to abandon distraction and approximation, caused by the superabundant communicative stimulus which characterize our everyday life, and lead to a – though brief – moment of interior reconciliation.