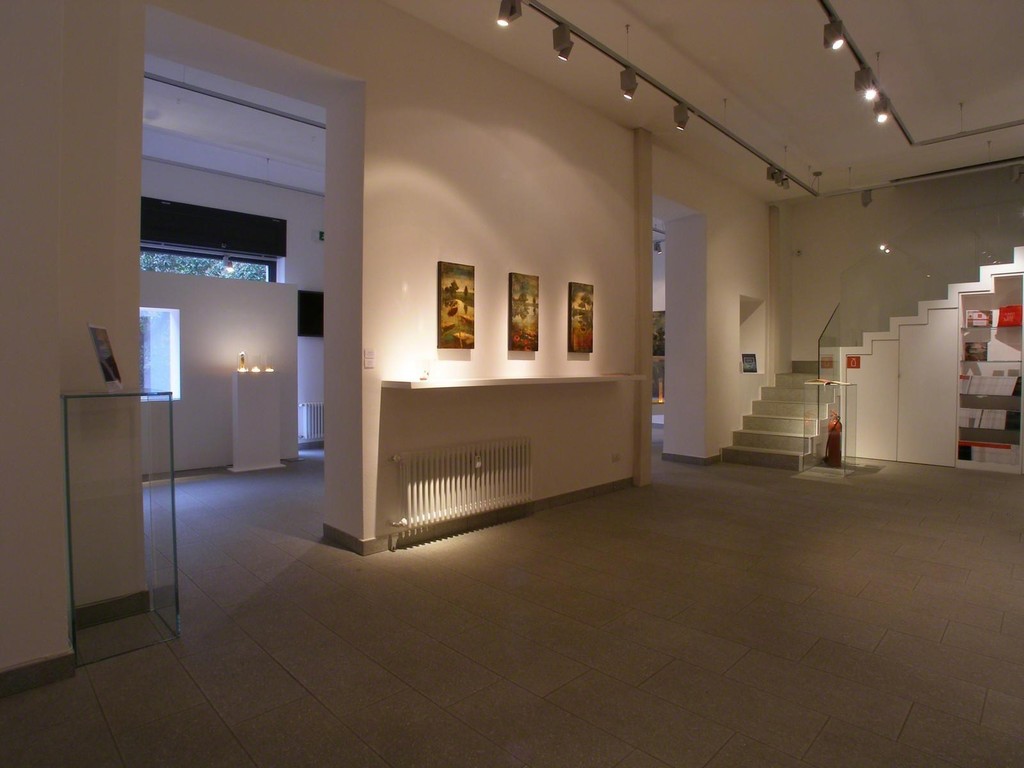 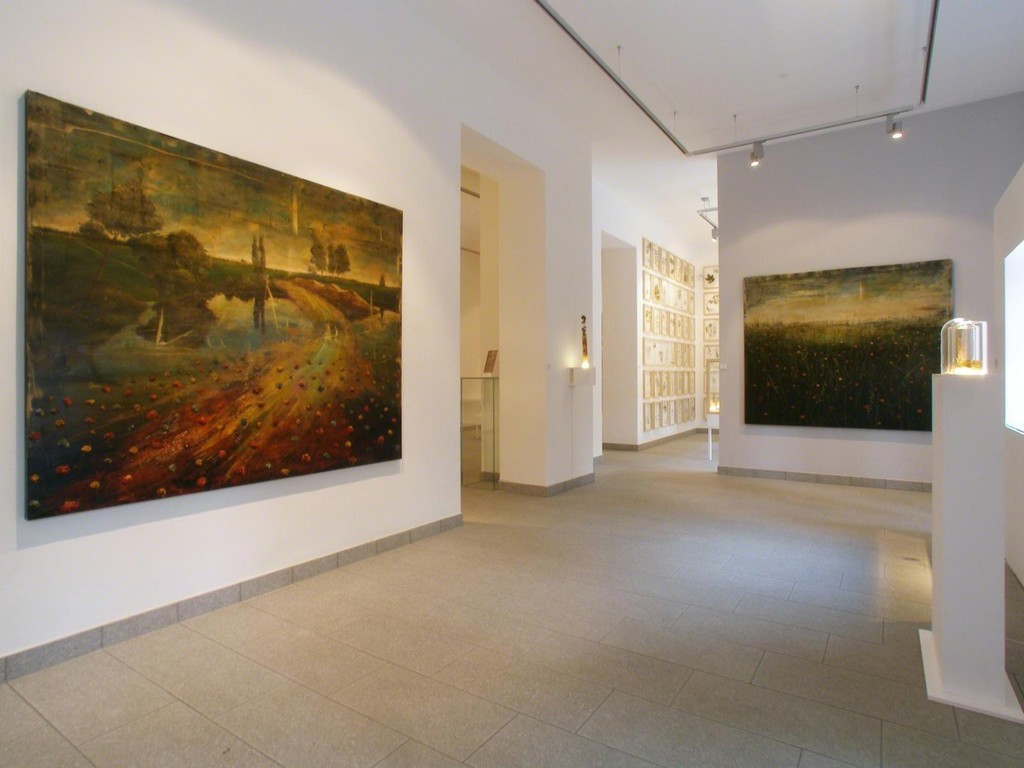 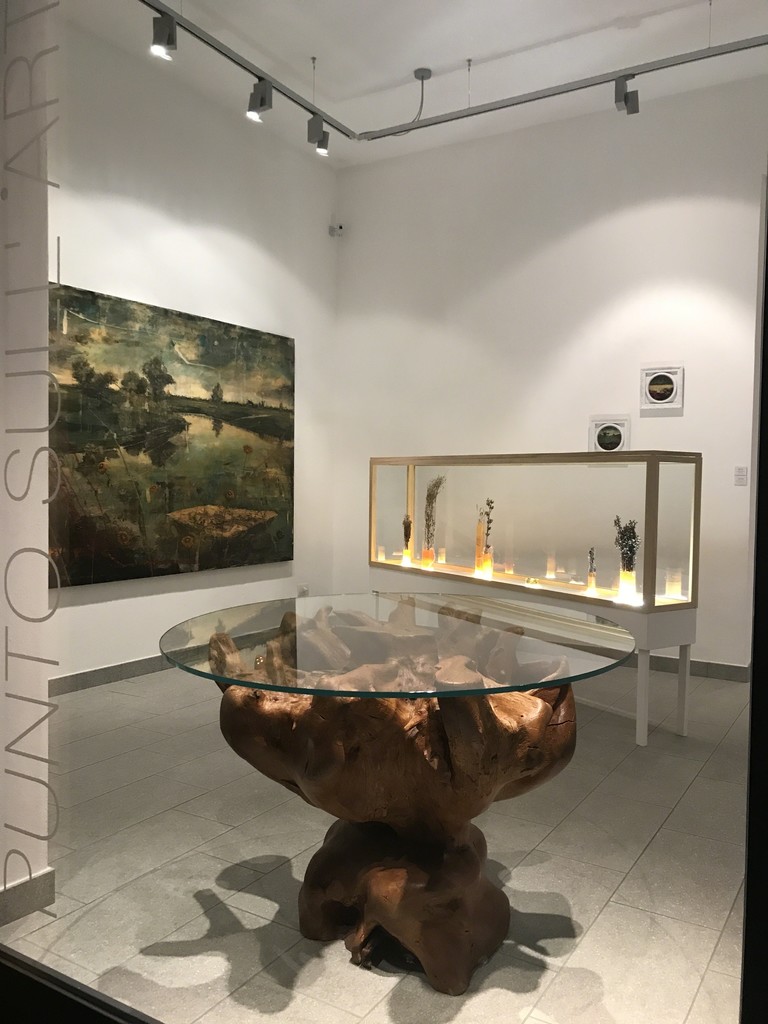 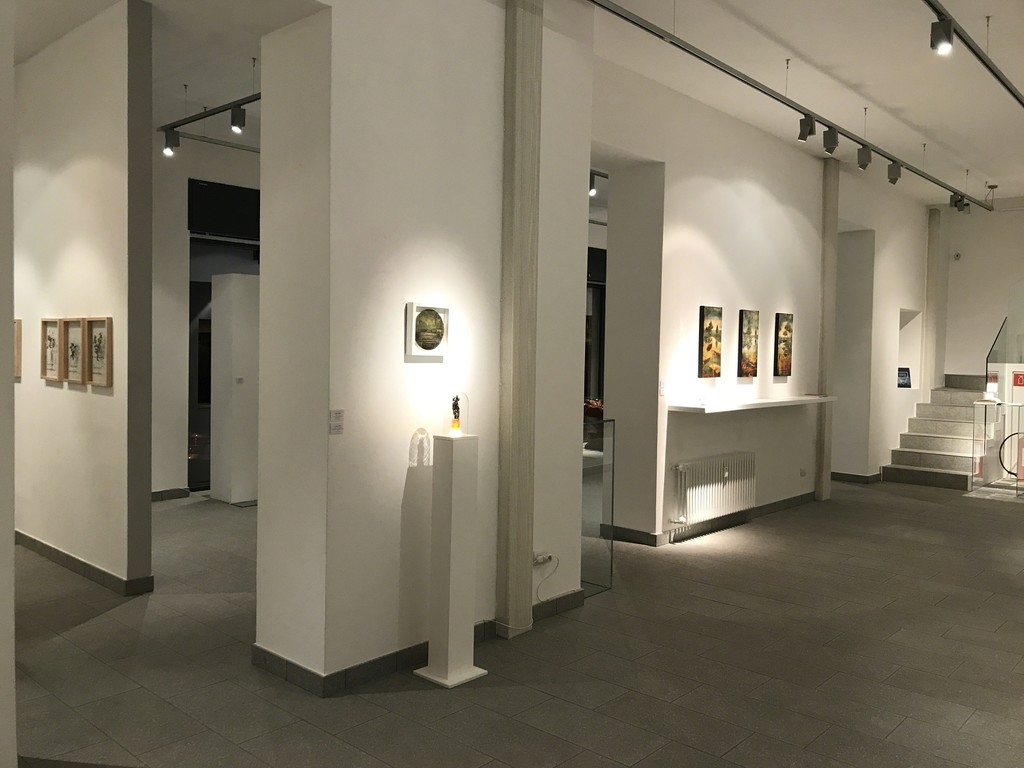 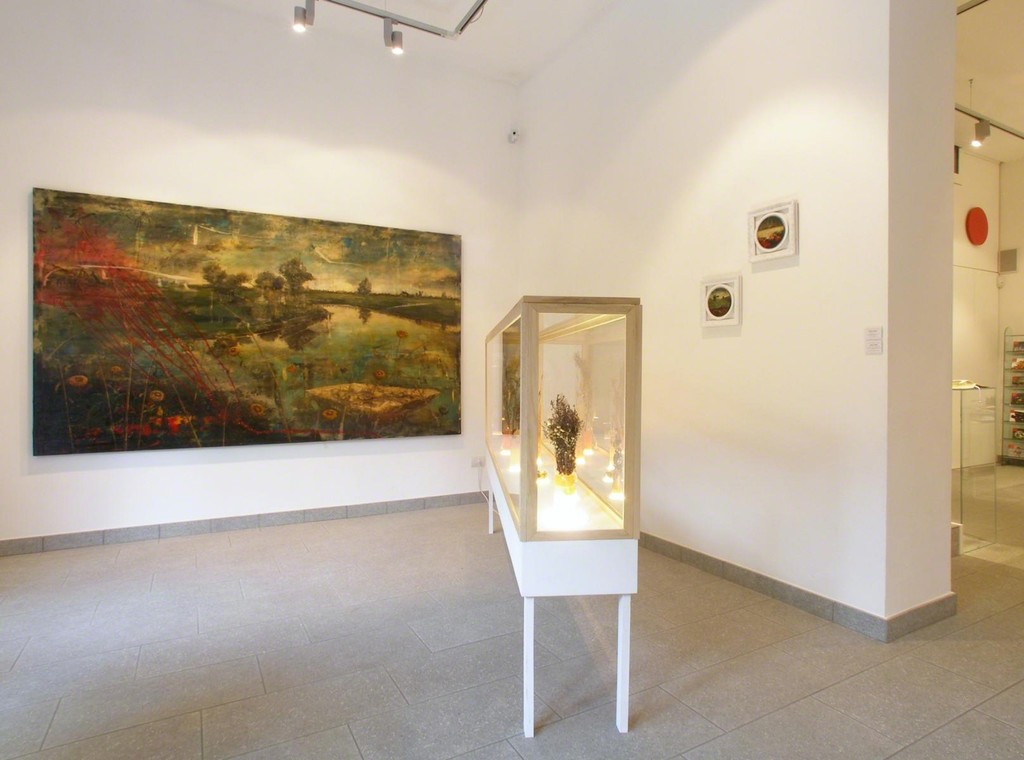 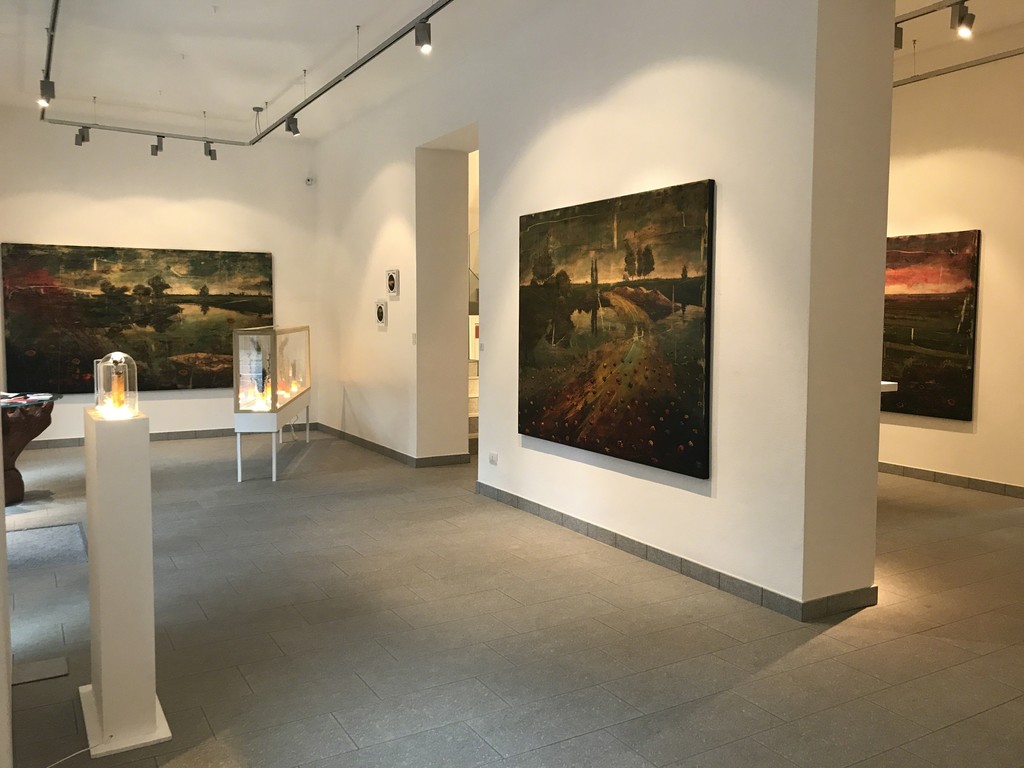 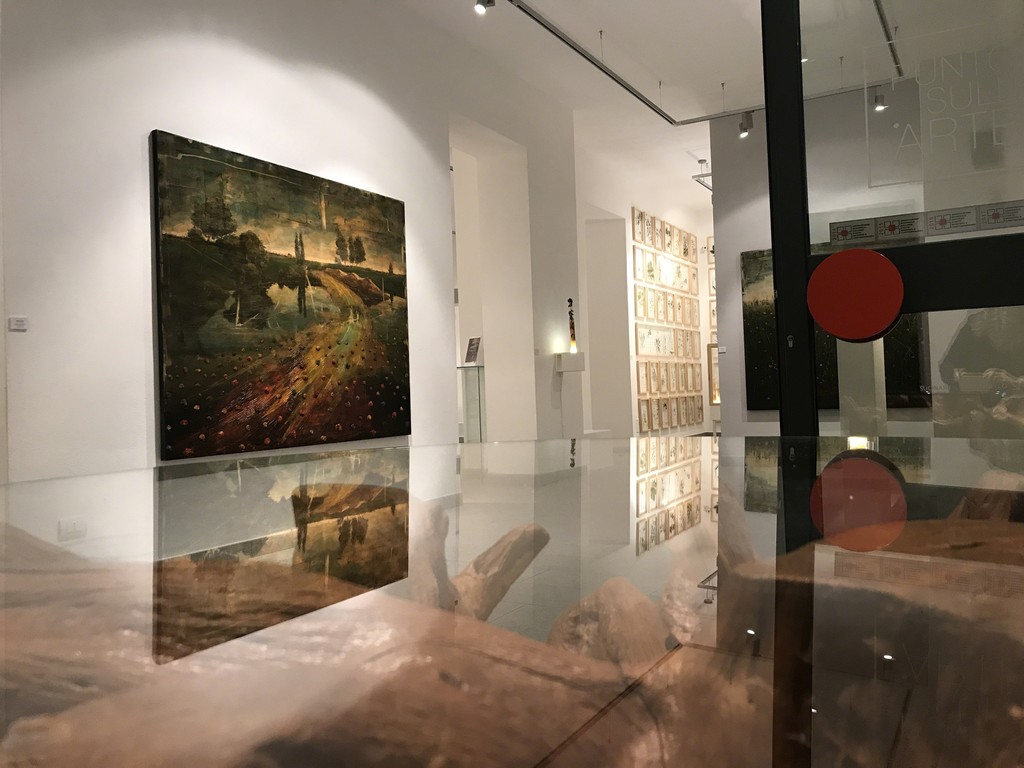 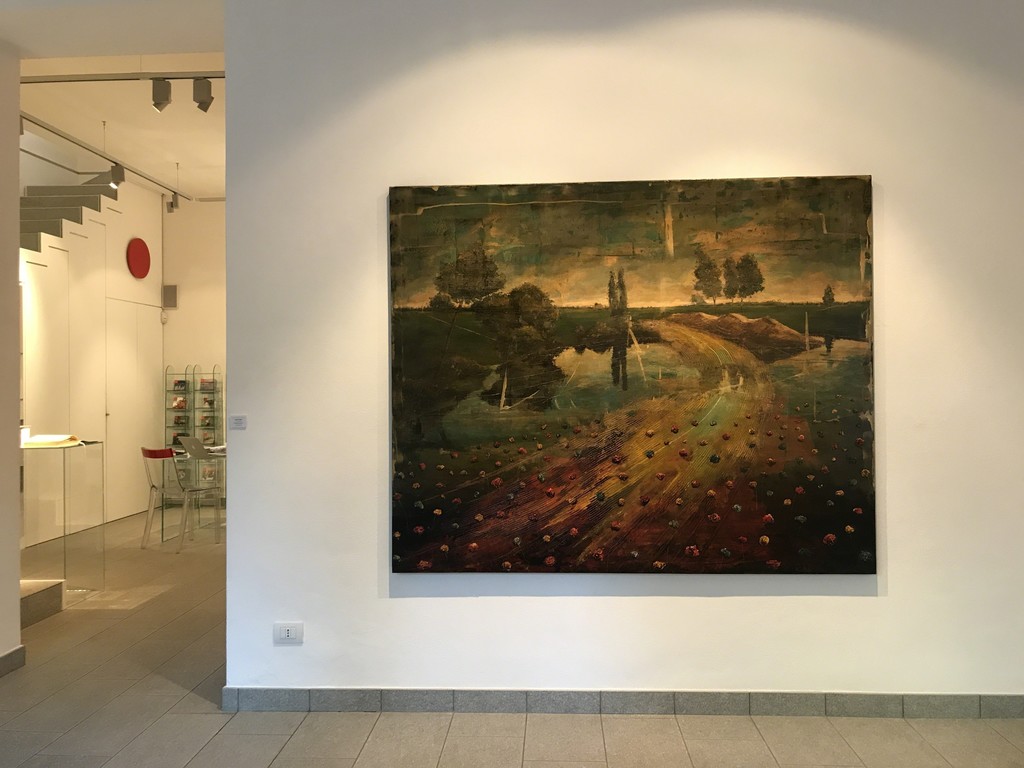 Being born in a contaminated land either makes you give up or take responsibility. JERNEJ FORBICI chose the second path. Born in 1980 in Slovenia near Kidričevo, a small industrial city which produces aluminum and today is surrounded by toxic waste dumps, Forbici decided to use painting as a form of denunciation, recounting on canvas the battle of resistance which nature carries out in order to regenerate itself and maintain its vitality. The unpublished works selected for the solo exhibition at the PUNTO SULL'ARTE gallery in Varese – VERNISSAGE SATURDAY 13th JANUARY 2018 6PM TO 9PM – are divided between two different exposition spaces, because they narrate, also chronologically, a before and an after. The landscape in its current form, compromised by human behaviour and a future in which fauna and flora are only memories visible 'under glass'. Study at the Academy of Fine Arts in Venice led the artist to assimilate the expressive codes and aesthetics of 19th century Italian landscape painting, mutating a certain melancholy. However his personal sensitivity drives him to portray landscapes only in the most wondrous visions from which, on a second reading, something more profound emerges: the lands, the waters, the skies, are in fact protagonists of an eco-denunciation. The same elements – sand, earth, sawdust – are imprisoned in the brush strokes, giving the work substance and making the message more incisive. The solo exhibition at PUNTO SULL'ARTE, which runs until February 17th, is positioned in an expository excursus of great merit: Jernej Forbici, who lives and works between Italy and Slovenia, has taken part in artistic events and exhibitions all over the world (the United States, Canada, Argentina, China, various countries in Europe and has been invited many times to the Venice Biennale). Beyond the artistic profession, Forbici feels the moral obligation to raise awareness of ecological themes and of environmental protection. For this reason his works are to be considered activism against the irreversible damage that human beings are capable of inflicting on the earth.

JERNEJ FORBICI: Born in Maribor (Slovenia) in 1980. He studied at the College for Visual Arts in Lubiana. He completed a degree in painting (with honours) under Professor Carlo Di Raco, at the Academy of Fine Arts in Venice, and then a Master's degree in visual and performing arts disciplines. From 1999 his work has been presented in numerous solo and group exhibitions in various European countries, in the United States, Canada, Argentina, and China. He has been invited to participate in the following Biennales: Hicetnunc, Pordenone (2003), IBCA, International Biennale of Contemporary Art in Prague, German pavilion (2005), Accade, 52nd Venice Biennale (2007), 54th Venice Biennale, Arsenale pavilion (2011). In 2009 the aforementioned Academy of Fine Arts in Venice dedicated a retrospective to Jernej Forbici at the Magazzini del Sale, curated by Carlo Di Raco. In 2011, after having published his first monograph and presented five retrospectives in Italy and Slovenia, he was invited to participate in the exhibition Il fuoco della natura in Trieste. In 2012 he was given a scholarship by the Slovenian Minister of Culture and was invited to take up a residency in London, where he dedicated himself to the study of the English masters. From 2013 to 2017 he presented various projects in private galleries and public institutions in Italy and abroad (Venice, Varese, Milan, Latina, Piacenza, Montesarchio, Vienna, Maribor, and Luxembourg) where Forbici showed the development of his pictorial work and of his personal artistic research, which places him as a frontline protagonist and director of the mutations of the landscape interpreted as the evolution of modern life, of manipulated earth, destroyed and violated as a result of our culture, civilization, and history. In 2017 he made, among others, the project Auri sacra fames exhibited at the Romberg Gallery in Latina where he portrayed the foundation of his message for today's world: the unconsciousness of human responsibility towards the place (planet Earth) that houses and feeds us. His works play a central role in the art world at an international level, so much so that today they are present in many exhibitions, fairs, institutions and collections. Currently he lives and works between between Strnišče (SI) and Vicenza.