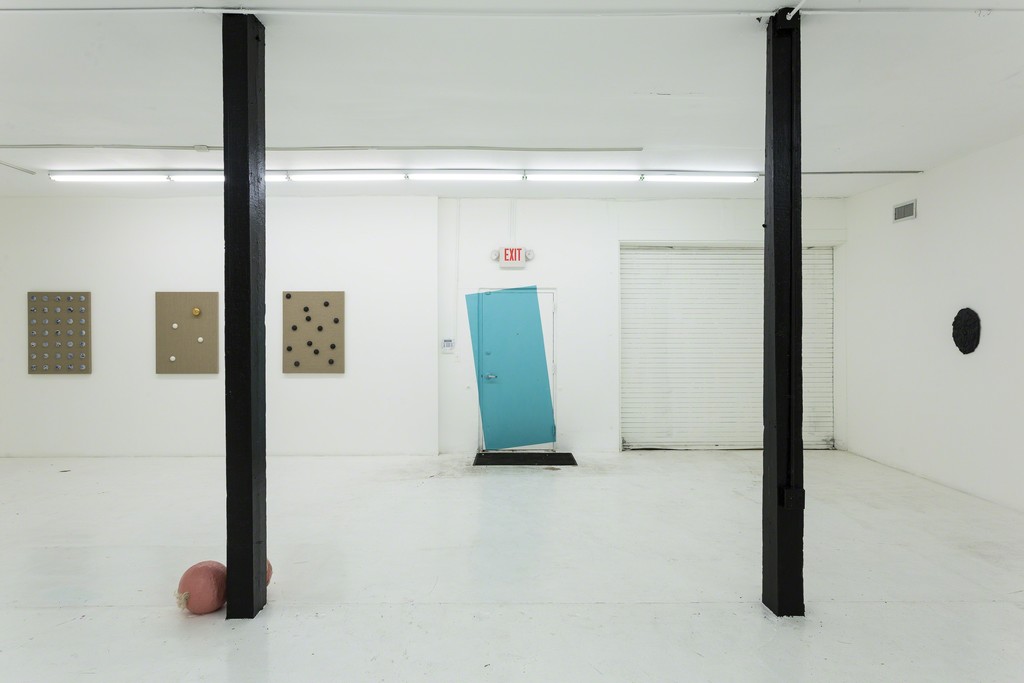 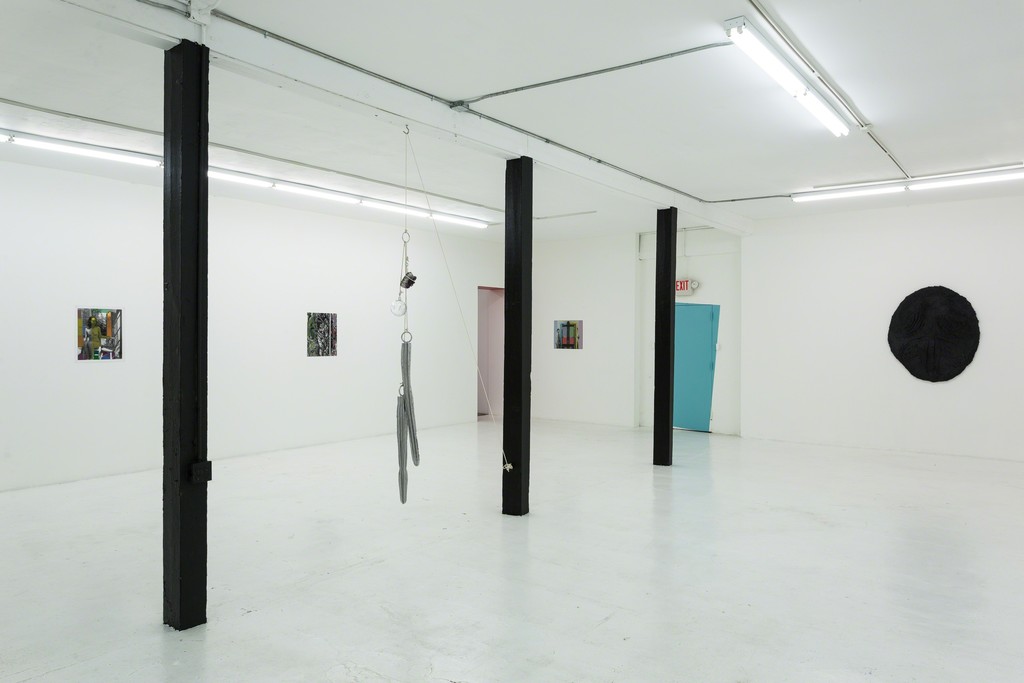 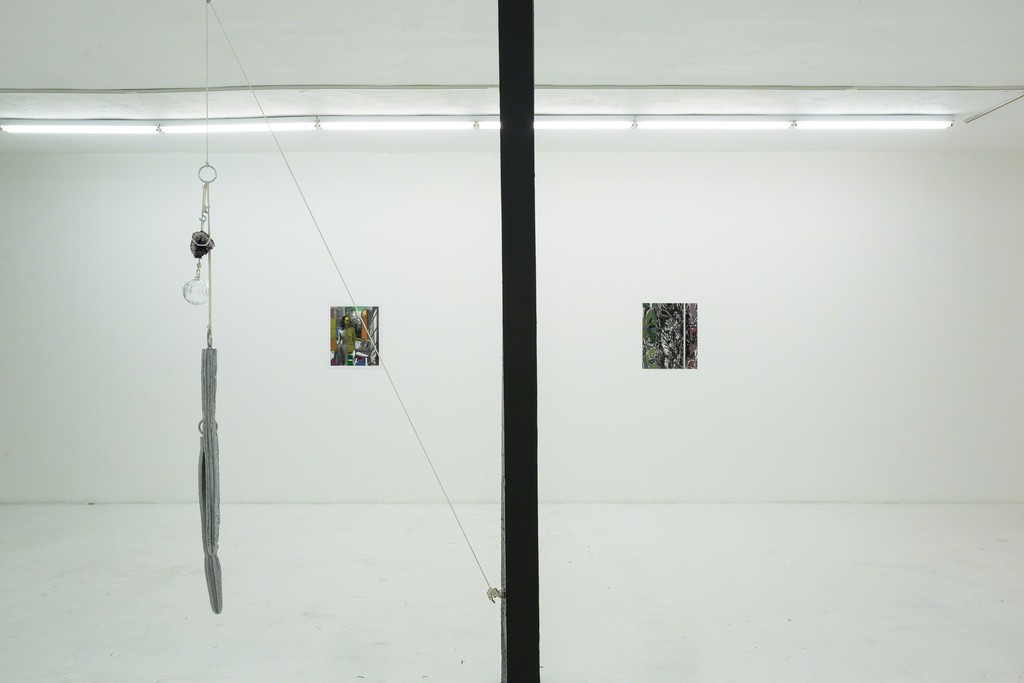 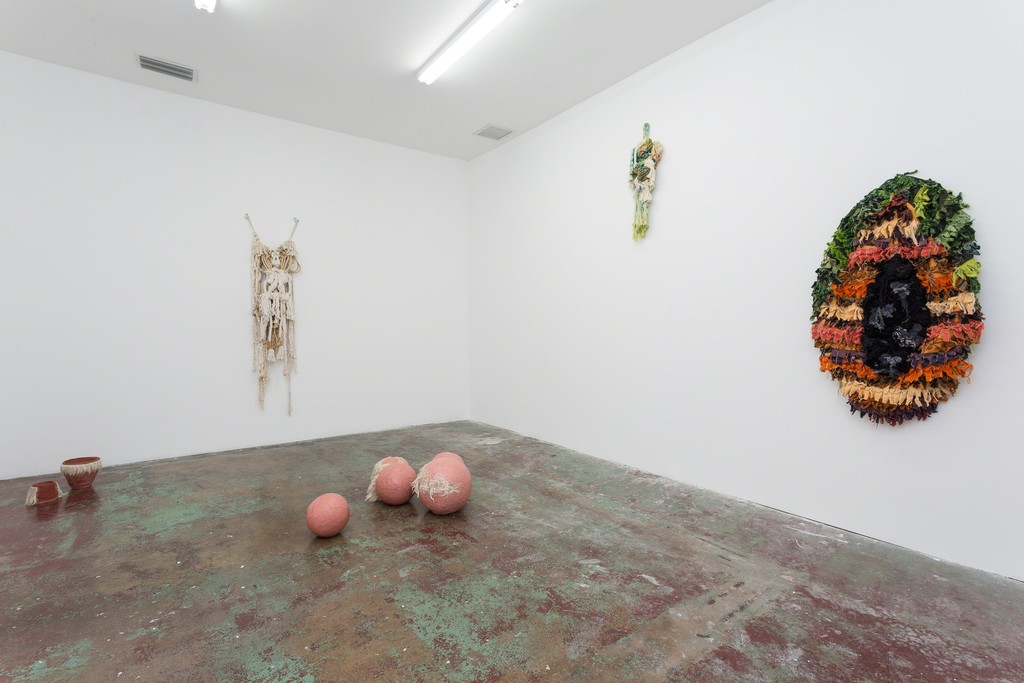 Bananas brings together the work of Tanya Aguiniga, Fay Ray, Chloe Seibert, Emmett Moore and George Woodman. These distinctly different practices each with their own intentionality come together to delight in a perverse tropical utopia. The works in the show speak a language particular to the heat of the mid-summer months. For decades, George Woodman has been exploring dimensionality, color and negative space via photography and painting. His works, though photographic, are unique, each a silver gelatin print that has been painted on. Figures appear and recede into space and abstraction, landscapes become interiors, interiors become objects and bodies become line. Based in Los Angeles, Fay Ray incorporates palm fronds, the body, photography and sculpture to explore ritual, fetish and femininity. Her wide ranging practice explores the jagged line between strength and sensuality, how objects and language shift that line and where all of these things intersect inside an object. Chloe Seibert’s work focuses on psychological impulses and responses to architectural, physical and social structures. She will be showing a new large black wall sculpture. Emmett Moore explores space and functionality through design. Tanya Aguiniga is a native of two cities, both Tijuana and Los Angeles, in her practice that straddles the worlds of art and design, she uses traditional and ancient crafts and materials such as terracotta and gold leaf to explore how our bodies engage with scale, history and the politics of function.

Tanya Aguiñiga (b. 1978) is a Los Angeles based designer and artist who was raised in Tijuana, Mexico. She holds an MFA in furniture design from Rhode Island School of Design. She created various collaborative installations with the Border Arts Workshop, an artists’ group that engages the languages of activism and community-based public art. She founded the group, Artists Helping Artisans, through which she helps spread knowledge of craft by collaborating with traditional artisans. Her work has been exhibited from Mexico City to Milan. She is a United States Artists Target Fellow in the field of Crafts and Traditional Arts, a GOOD 100 2013 Recipient and has been the subject of a cover article for American Craft Magazine and included in PBS’s Craft in America Series.

Emmett Moore is a Miami based sculptor and designer with a BFA in Furniture Design from Rhode Island School of Design, Providence, RI. His work has been exhibited at the RISD Museum, The Frost Art Museum, The Miami Art Museum, and The Bass Museum of Art, Gallery Diet, Design Miami, Architecture at Large, Primary Projects, Locust Projects, OHWOW, Patrick Parrish, and The Standard Miami.

George Woodman is a photographer and painter whose career has spanned over 60 years. His work has been exhibited in the United States, Mexico, Europe and India. Woodman received a fellowship from the National Endowment for the Arts and the National Artist Award from the Anderson Ranch Arts Center in Aspen, Colorado. His work is in the permanent collections of The Museum of Modern Art, The Guggenheim Museum, The Whitney Museum of American Art, and the Brooklyn Museum, among others. He is Professor Emeritus at the University of Colorado in Boulder where he taught painting and the philosophy of art. Woodman lives half of each year in New York and the other half in Antella, Italy.