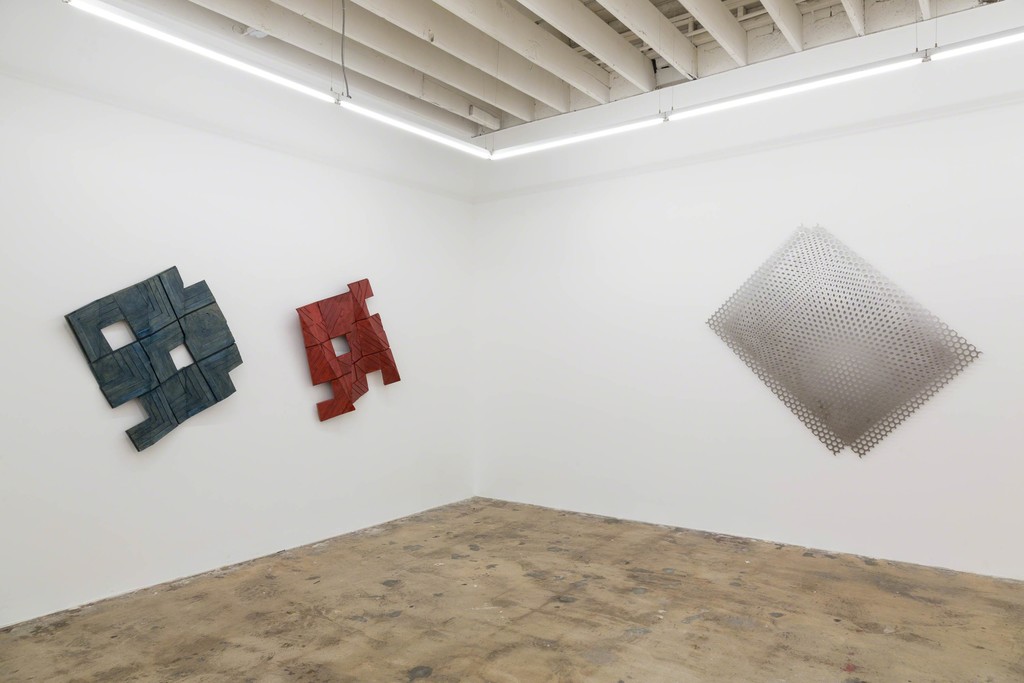 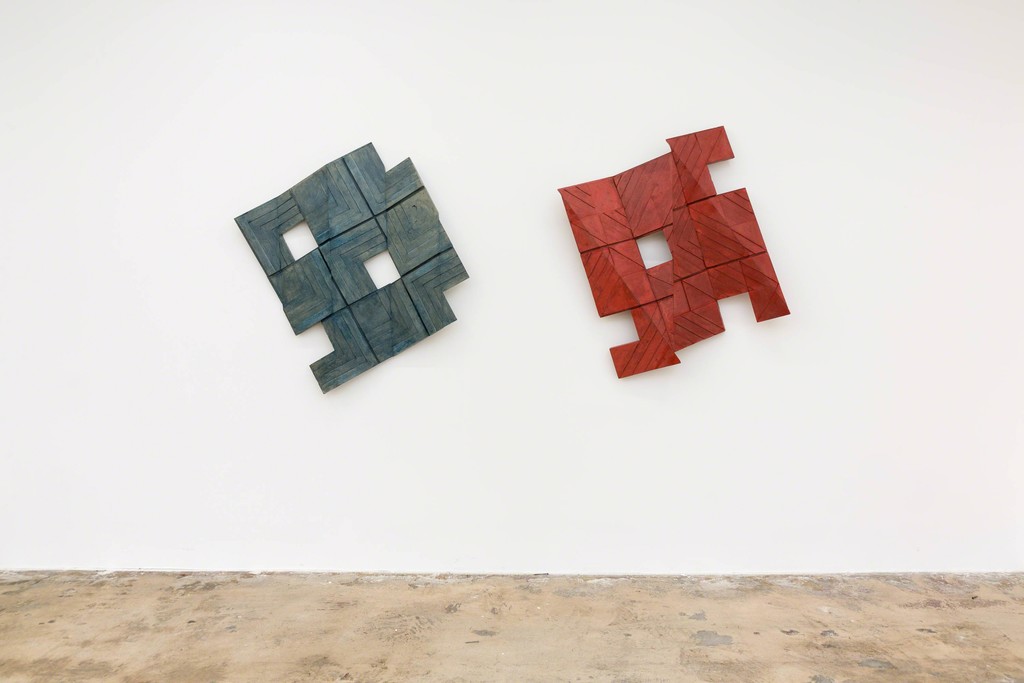 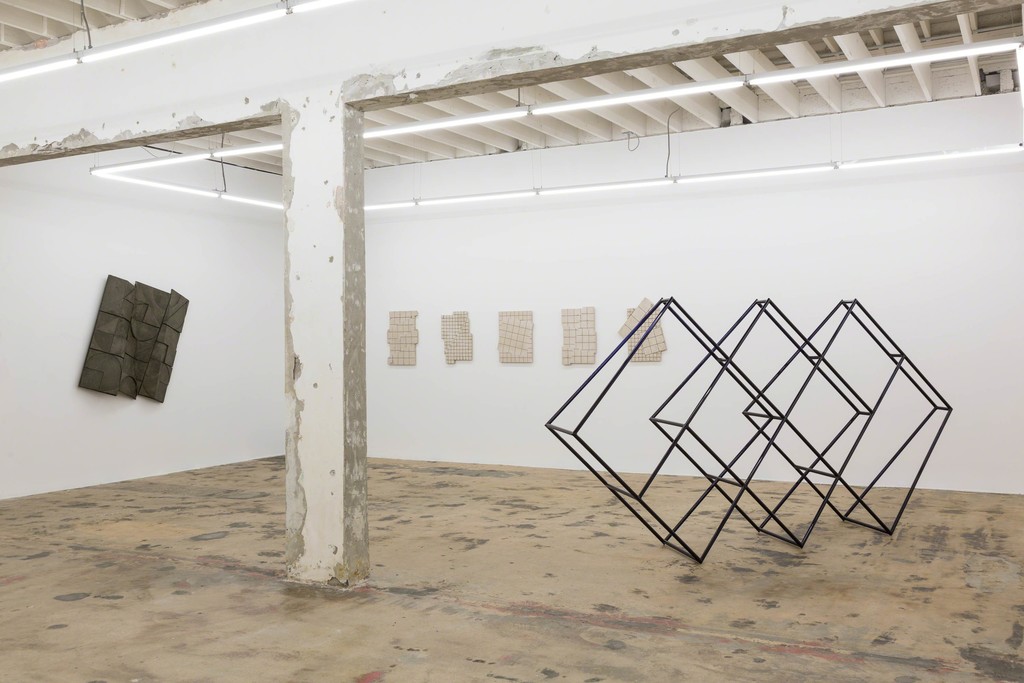 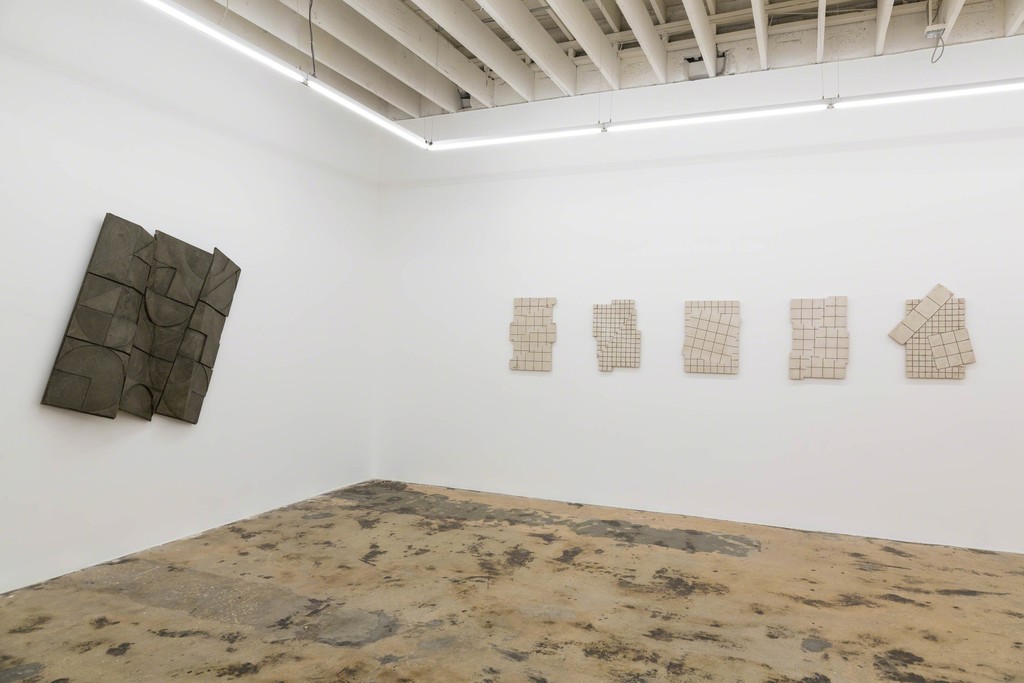 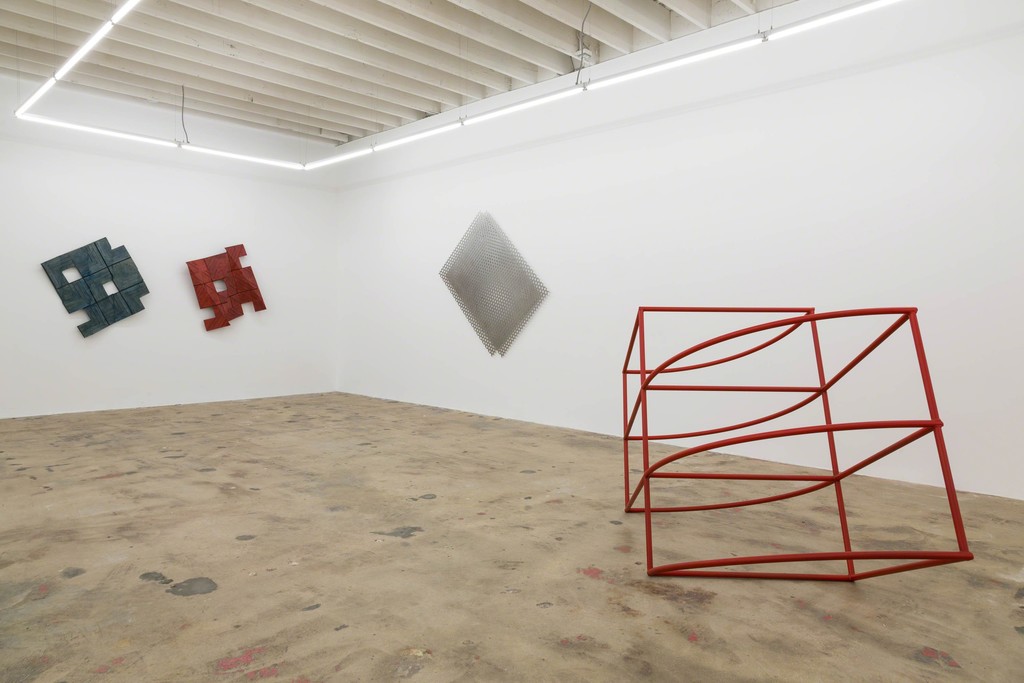 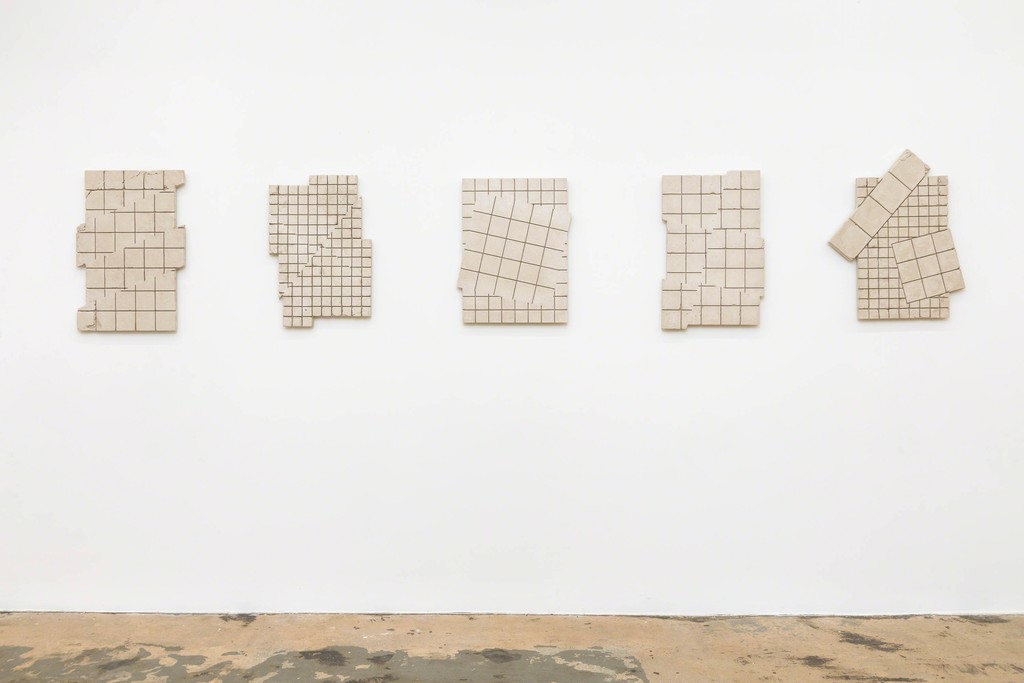 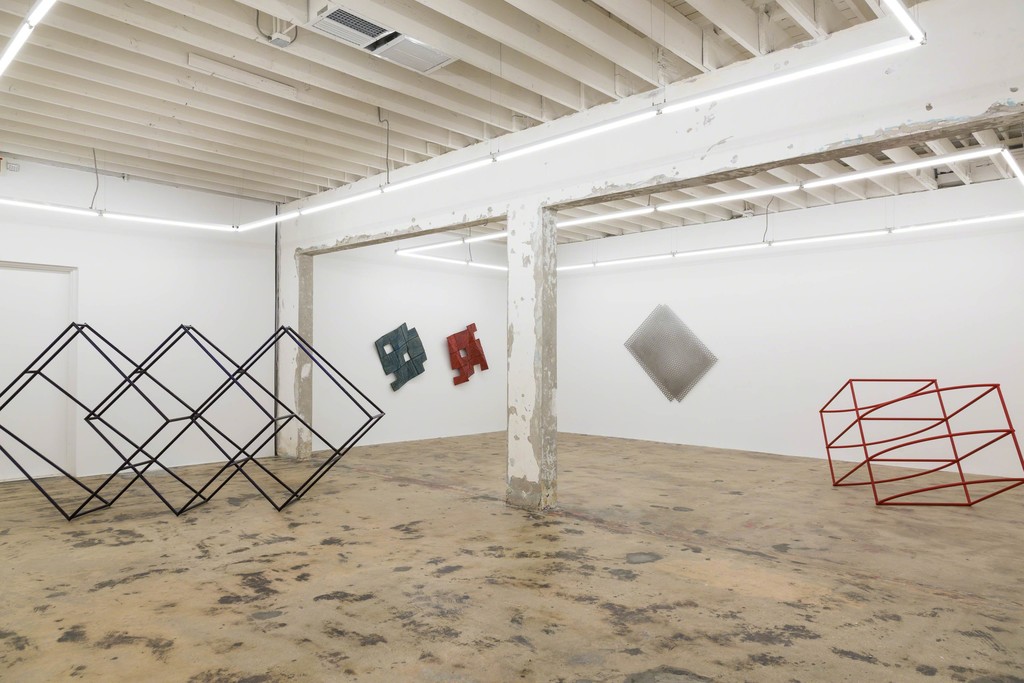 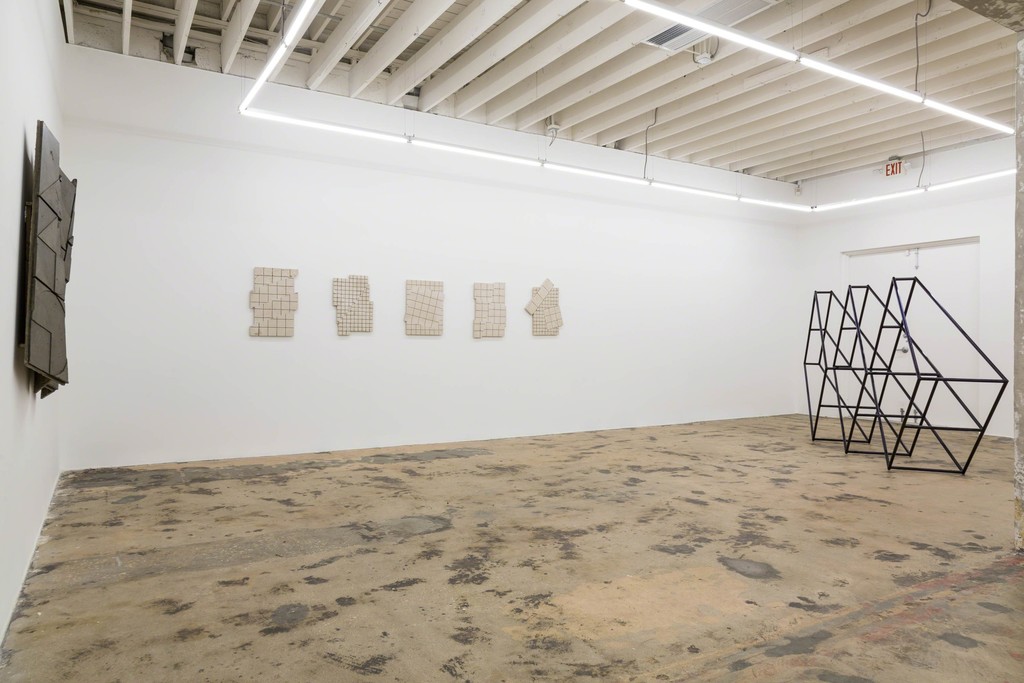 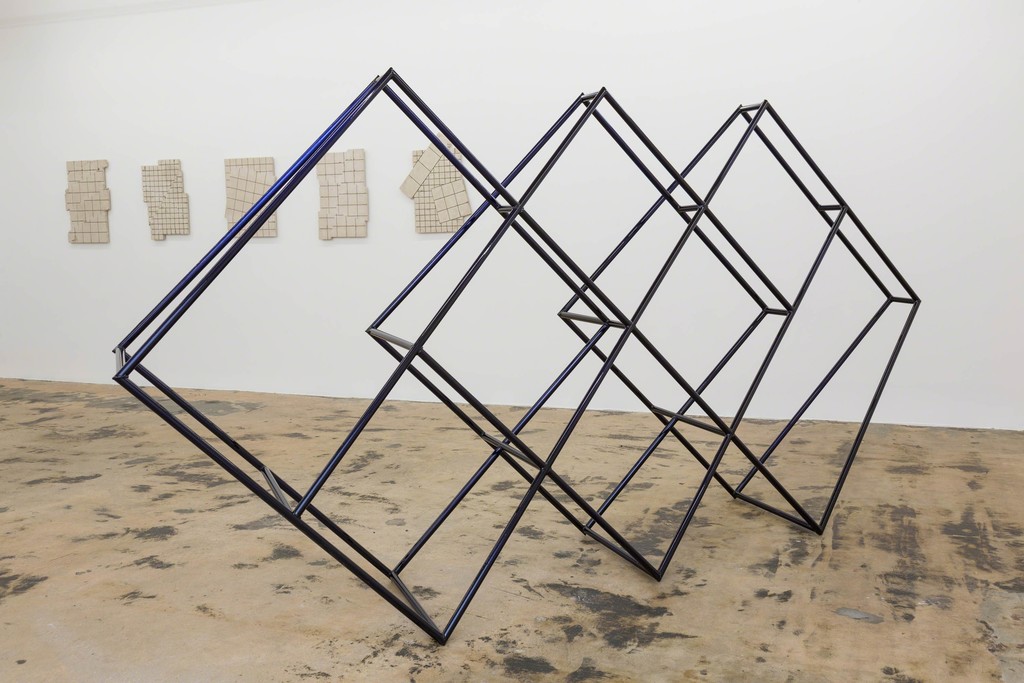 Gallery Diet is proud to announce Fracture, Emmett Moore’s second solo exhibition at the gallery. On display are sculptures and panels that reference Moore’s design practice and the formal qualities of modernist and Minimalist sculpture, while taking visual cues from Miami’s environs. The title of the exhibition refers to the surfaces of the forms, but also hints phonetically at the combination of fractal and architecture.At the center of the show is a series of wall-mounted concrete panels that are folded to mimic architectural elements. Using the one-foot square concrete block as a starting point (such as those seen in Florida's iconic breeze-block designs), Moore makes simple variations—crease lines, bevel cuts, 45-degree rotations—to create a wall sculpture. In a second series, grids of white mortar tiles are carefully interrupted at certain angles, to appear fractured but to fit seamlessly together in a system of junctures and unions. Both of these series are made with a unique material cocktail that includes cement, water-based resin, fiberglass, and colored dye. Also on view is a panel made from overlapping layers of perforated stainless steel, offset at an angle to create disorienting visual effects. The most direct reference to architecture is the pair of sculptures that mimic steel awnings, featuring just the metal armature without any fabric covering, set freestanding in the middle of the gallery.Fracture displays Moore’s flexibility as a producer of objects. Hesitant to differentiate between art and design, he recalibrates these familiar structures in a way that is not immediately recognizable. This show expands his scope as it finds him focusing on architecture, in addition to the design objects for which he is best known. Looking at architects such as Carlo Scarpa and Minimalist artists such as Frank Stella, Moore takes puts economy of materials through novel production techniques to generate these works. Fracture explores how systems—industrial, geometric, utilitarian—are formed, break down, and can be transformed into something new.Emmett Moore is a Miami-based sculptor and designer represented by Gallery Diet. His work has been shown locally at the Frost Art Museum, the Miami Art Museum, and the Bass Museum of Art, as well as the RISD Museum, Providence. His first solo museum exhibition, Human Factory, is currently on view at bassX. In 2014, he was the first Miami-based designer to exhibit a solo project at DesignMiami/ and he was commissioned to design the marketplace of the fair in 2015. Recent gallery shows include those at Locust Projects, Miami; Patrick Parrish Gallery, New York; and OHWOW, Los Angeles. He received his BFA in Furniture Design from the Rhode Island School of Design.