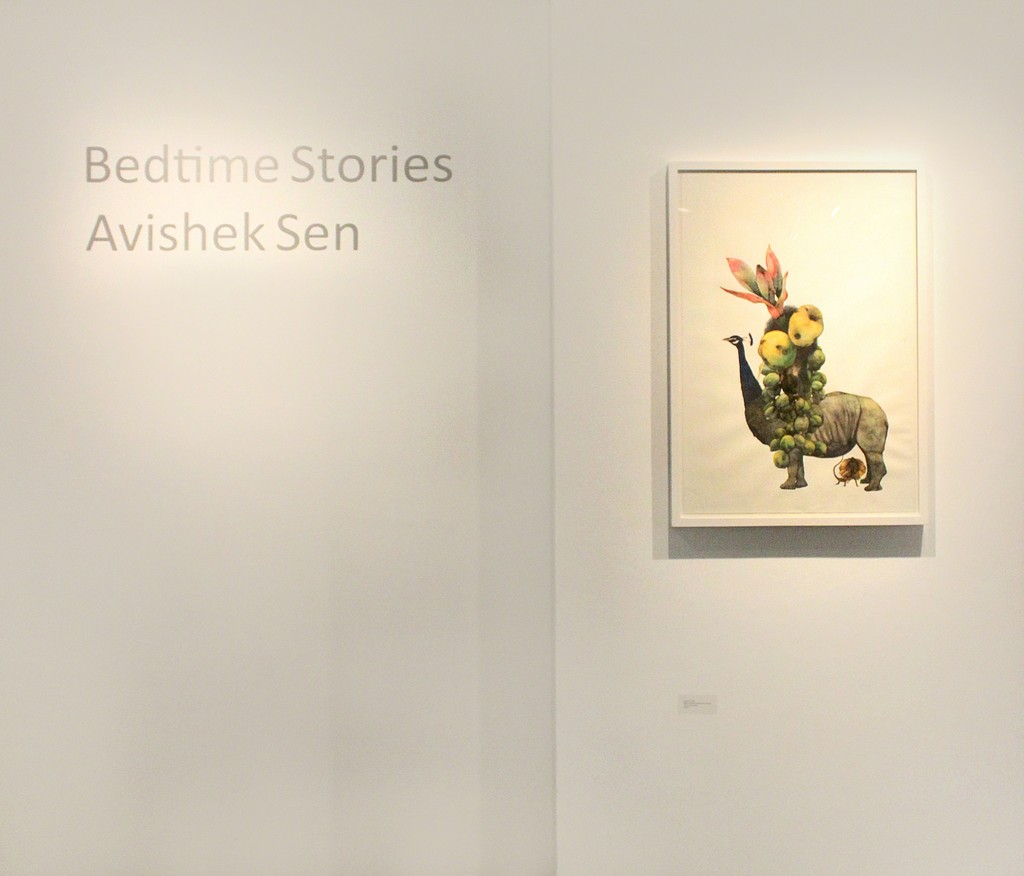 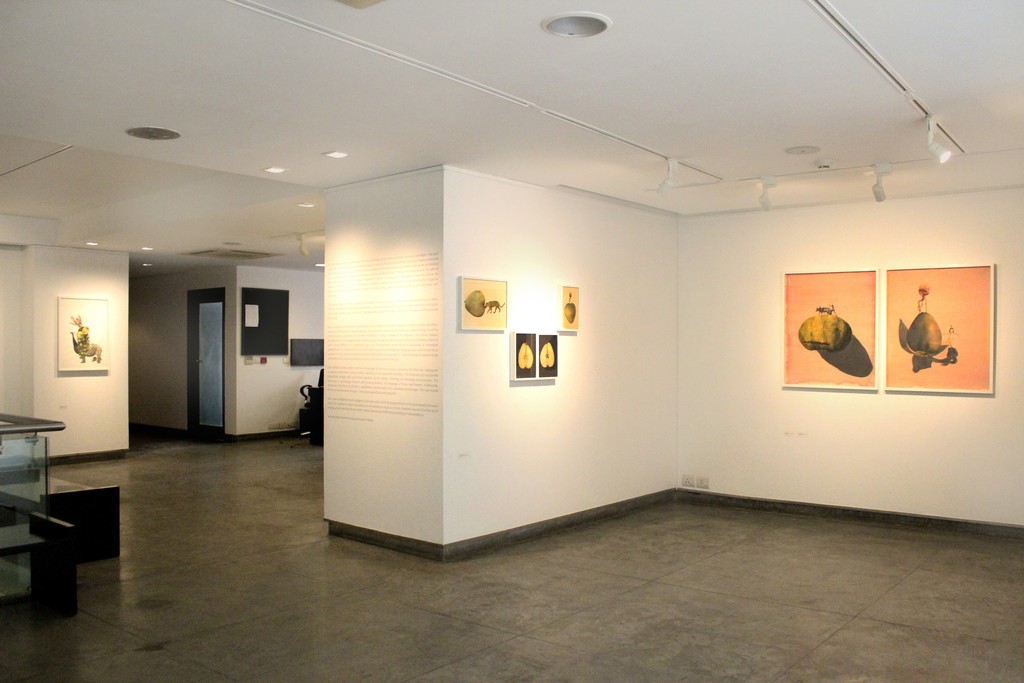 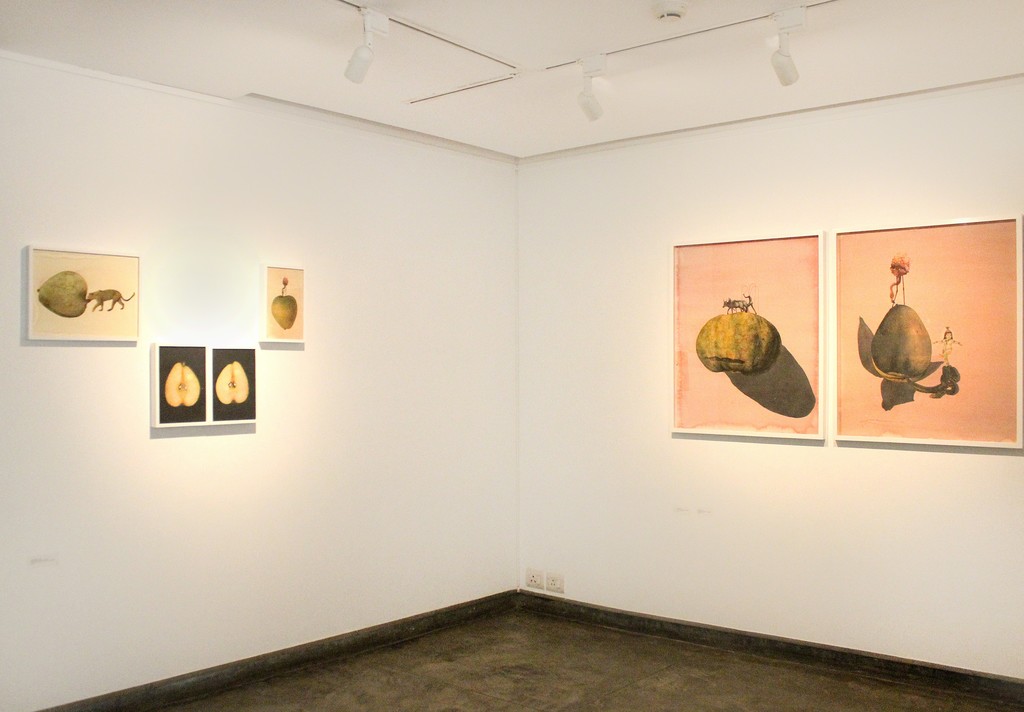 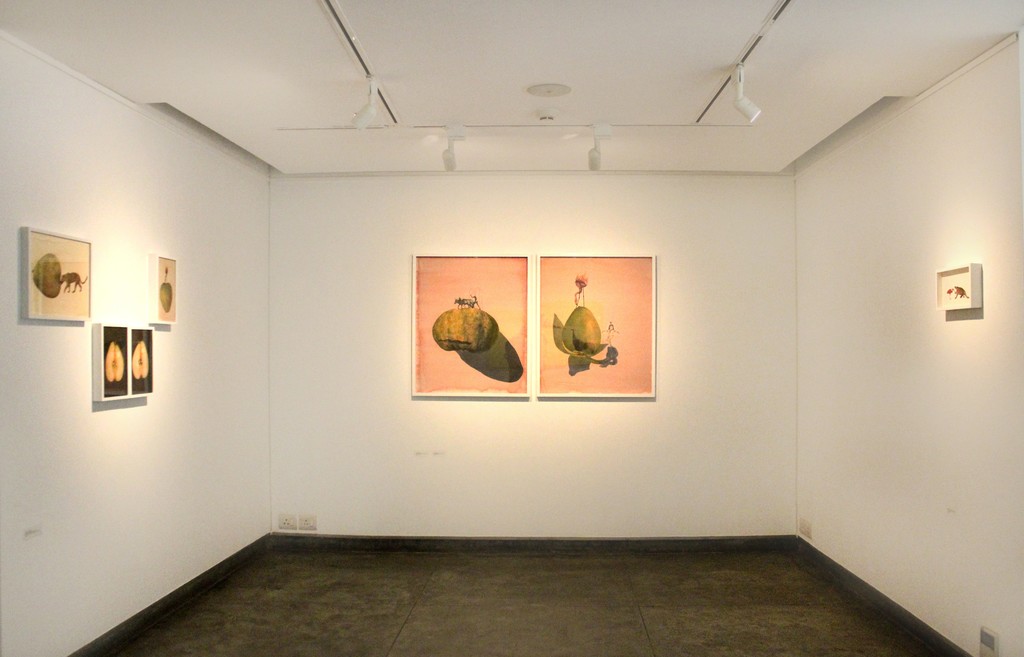 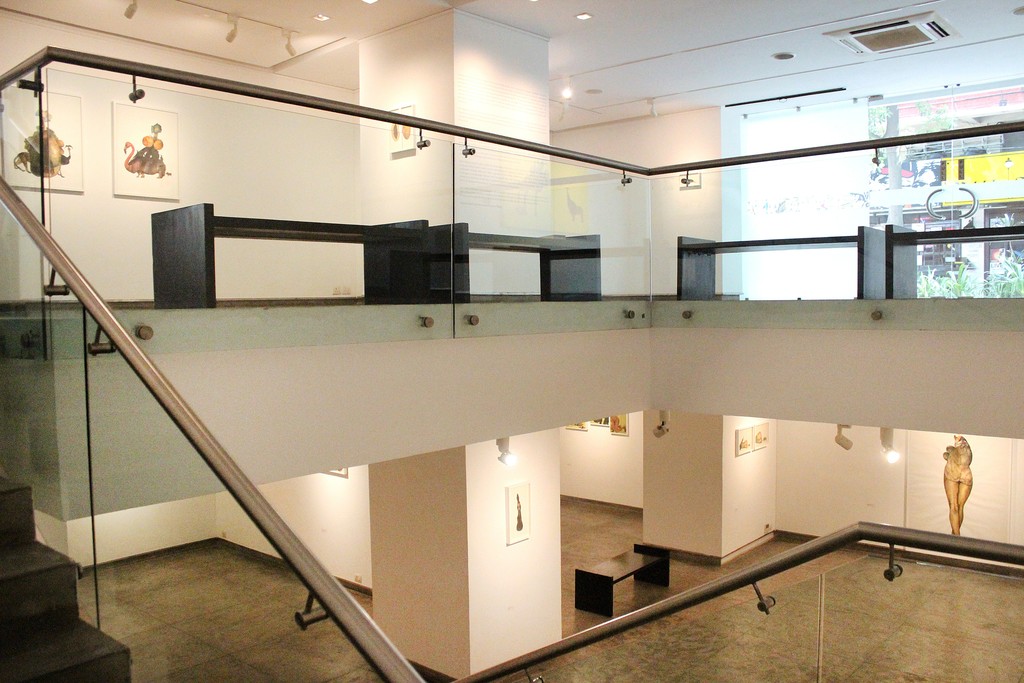 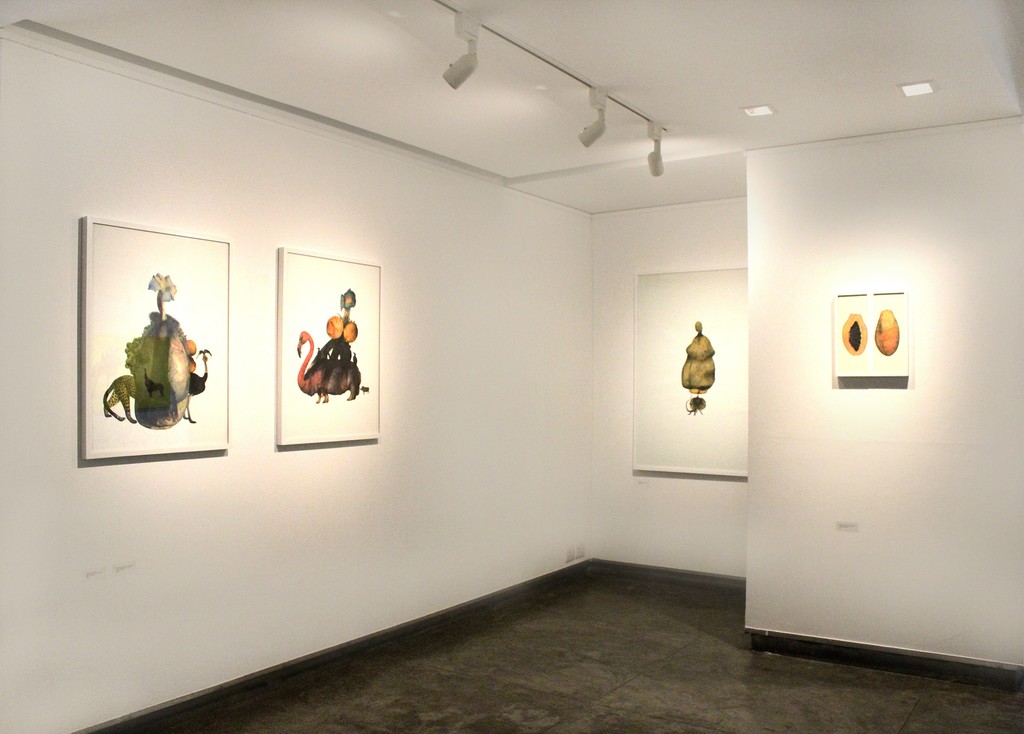 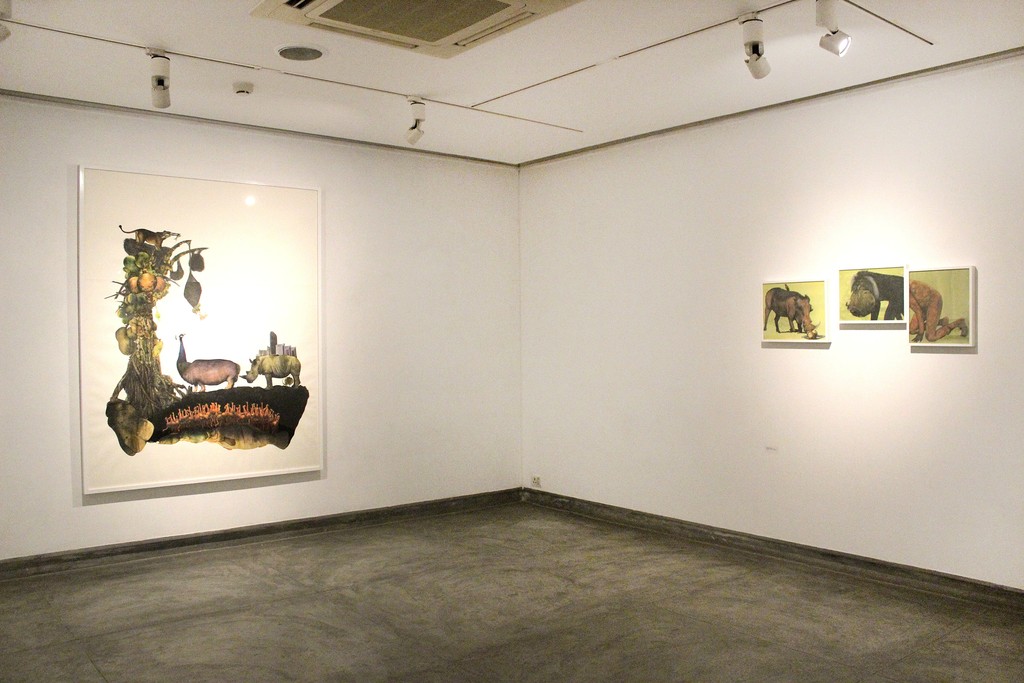 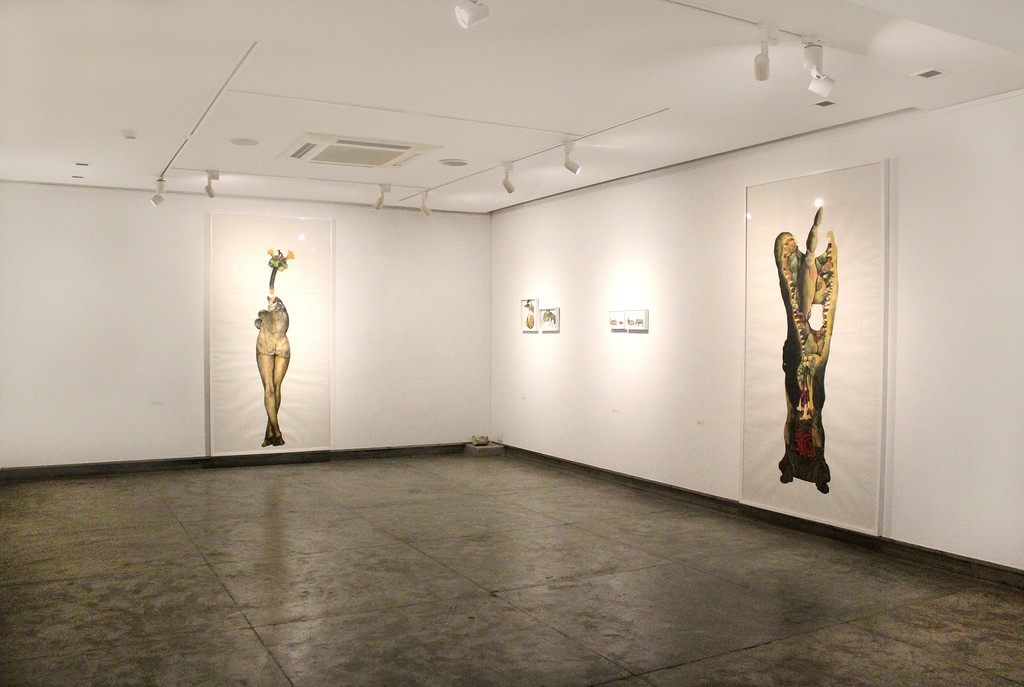 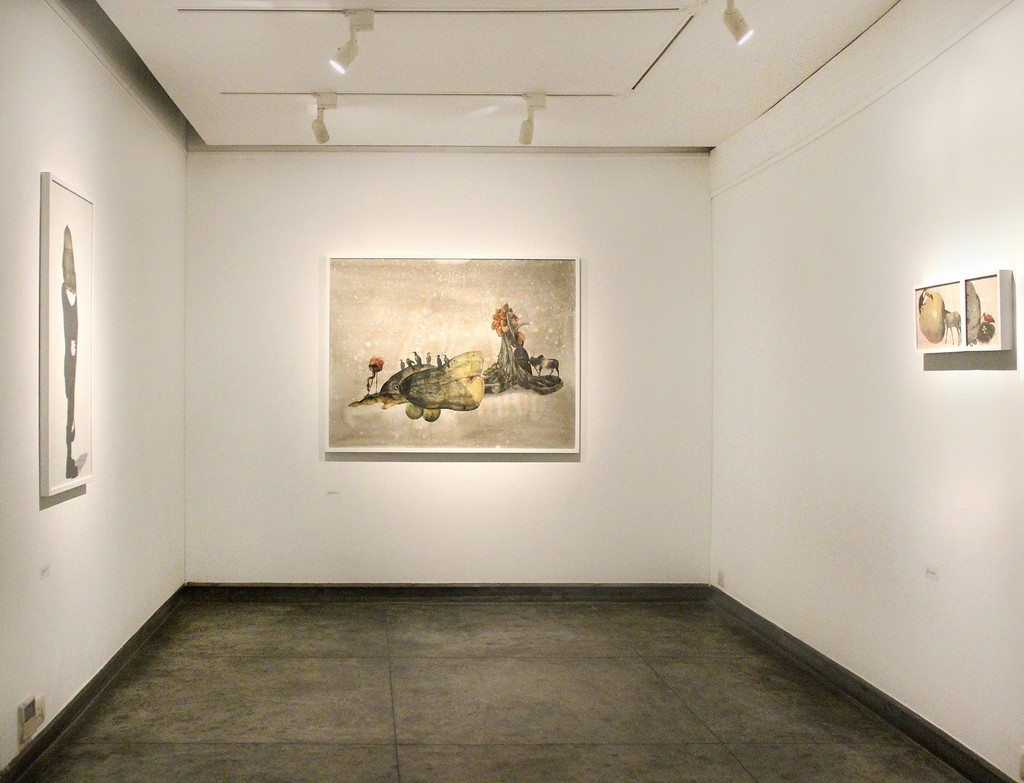 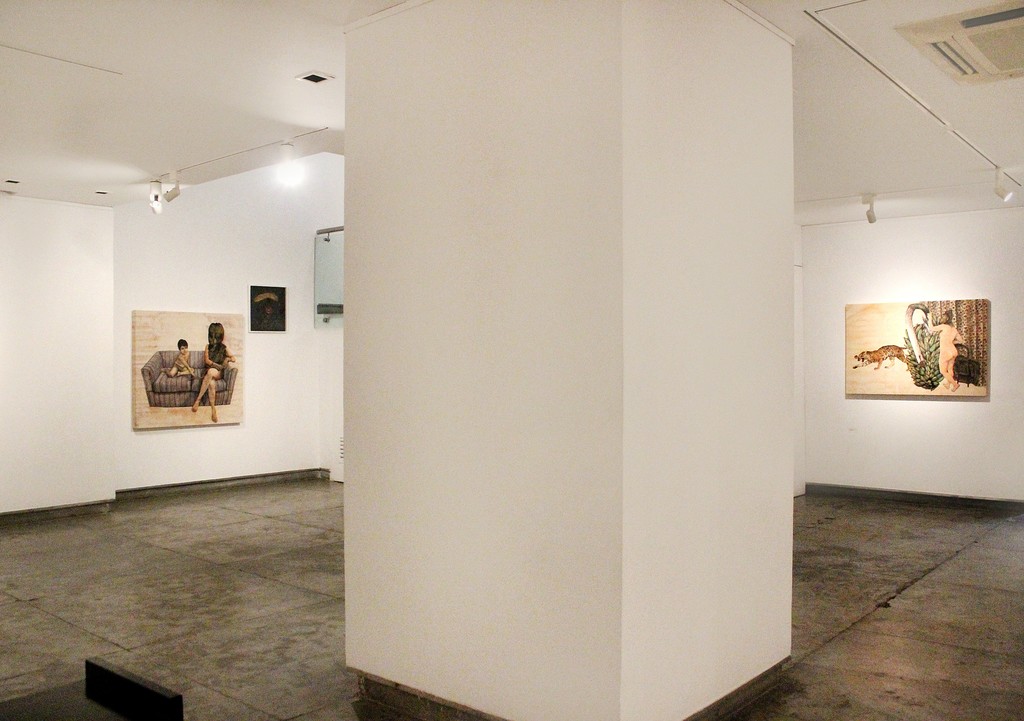 Gallery Espace being one of Delhi’s premier art galleries is delighted to announce, a solo show of works by Avishek Sen titled ‘Bedtime Stories’ . With its preview on Thursday, October 01, 2015, 6.30 pm onwards. The exhibition will be on view till Tuesday, October 27, 2015.

‘Like the quaint fruit-merchant goblins in Christina Rossetti’s 1859 poem, “Goblin Market”, Sen tempts us to suckle on “fruits which that unknown orchard bore.” He tantalizes our hunger for the scorchingly erotic that comprises his visual paradigm—the pert contours of ripening bananas, the sticky sappy entrails of a voluptuous jackfruit, cavernous flowers, oversized pumpkins, and hyperbolic, seed-filled halves of papayas that alternatively recur within or alongside carnivorous jaws, probing beaks, disappearing tongues and fish-swallowing fish. Through the liquid lure of his suite of watercolors into which he mingles fragments of glitter, he envisages landscapes of over-abundance. He exposes the naked interior of a sliced pear or hints at a deftly made incision that would allow the tongue to burrow through to the deep core to mine it for the unholy sake of pleasure-seeking. A cast of animals and birds stand in for human appetite. On occasion male or female limbs appear but only to serve a metonymic function, referencing the human body. All these corporeal parts are absorbed into the figurative whole to create a carnal metaphor. The ensuing hybrid compositions are either suspended singularly against delicately washed paper or are structured such that they must dialogue with an accompanying other. By encompassing each individual narrative into the potentially subversive scaffolding of the bedtime story, Sen entices us to plunge into the profane universe of the wet dream.’
(Excerpt taken from the essay by Rosalyn D’Mello)
About the Artist
Avishek Sen holds a Master’s degree in Painting from Kalabhavan, Vishwa Bharati University, Santiniketan, West Bengal. Sen has been of a National Scholarship awarded by the Human Resource Development, Government of India in the year 2000. The artist has had a couple of solo and group shows both in India and overseas in the recent past. Along with these, he has participated in residencies both on national and international level.
The artist lives and works in New Delhi.

Gallery Espace was established in New Delhi (India), in 1989 by Renu Modi with an exhibition of autobiographical works of MF Husain, Modern India’s most celebrated artist and one of the founder members of the path-breaking Progressive Artists Group. Soon success followed success, and the Gallery’s name became synonymous with representing artists, whose works defined the 1980s-Jagdish Swaminathan; Manjit Bawa, Krishen Khanna, Bhupen Khakhar & Vishwanadhan). Espace also represents artists like Zarina Hashmi who has had retrospective exhibitions at The Hammer Museum, LA, USA and Guggenheim, NY, USA. Nilima Sheikh is another important artist along with the others currently on Espace’s roster who has shown at The Art Institute of Chicago, USA recently.

From its early inception when the circulation of art was limited to informal efforts, Espace has constantly traversed borders and boundaries, showcasing the art of primarily Indian artists from multiple generations in diverse mediums. Efforts through the early and mid 1990s were concentrated on anticipating trends, spotting latent talent and giving a much-needed platform to many previously unknown talents Chintan Upadhyay, Manjunath Kamath and G R Iranna some artists who today rank amongst the most prolific of the younger generation.

Primarily built around the vision of its Director, Renu Modi, the endeavour has been on representing artists who concern themselves in the realization of work dealing with issues reflecting contemporary society's concerns; documenting today's reality. Renu Modi’s foray into art began with M.F.Husain designing her home in 1986; a sculptural-installation that stands as the only one of its kind. Married into one of the most influential families of India, she started her long entrepreneurial career from a one board-room space, combining business acumen with a flair for showmanship and leading the Gallery into its present form- a three-tier area, made particularly conducive to greater interaction, experimentation and understanding of the arts, supported by dynamic design and modern technology. Her artistic vision was based upon an inter-disciplinary approach to fine art, uninhibited by preconceived notions and theories of the art movements of the past. Espace, under her vision, can be credited for organizing curated exhibitions, probably some of the first in the Indian art scene, providing a platform for leading art commentators and journalists to translate their ideas into an artist-shared pictorial vision (Drawing ’94, Sculpture ’95, Mini-Print ’96, Kitsch Kitsch Hota Hai ‘01, Bronze ’06, Drawing 2014). In its journey of 25 years as a vast entrepreneurial enterprise, Espace has also had the pleasure of collaborating with leading institutions in India.