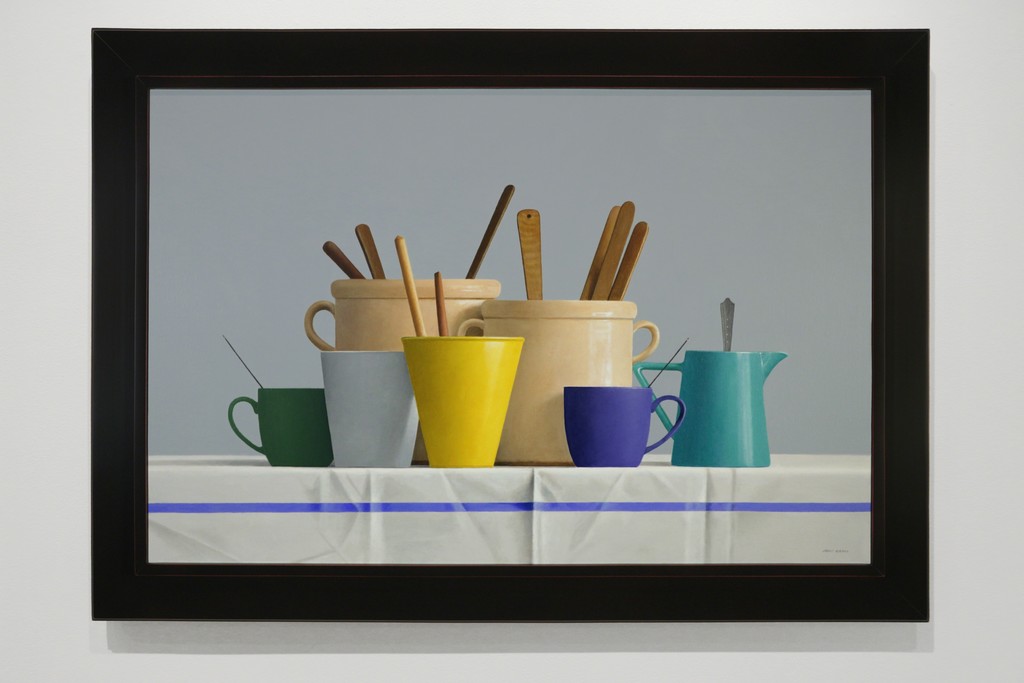 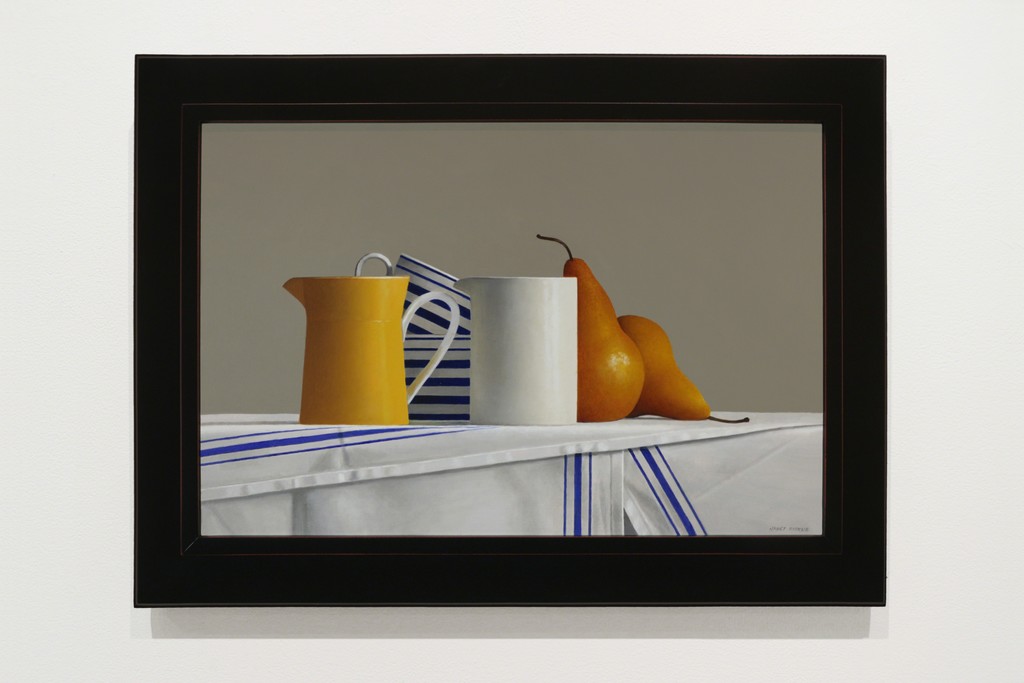 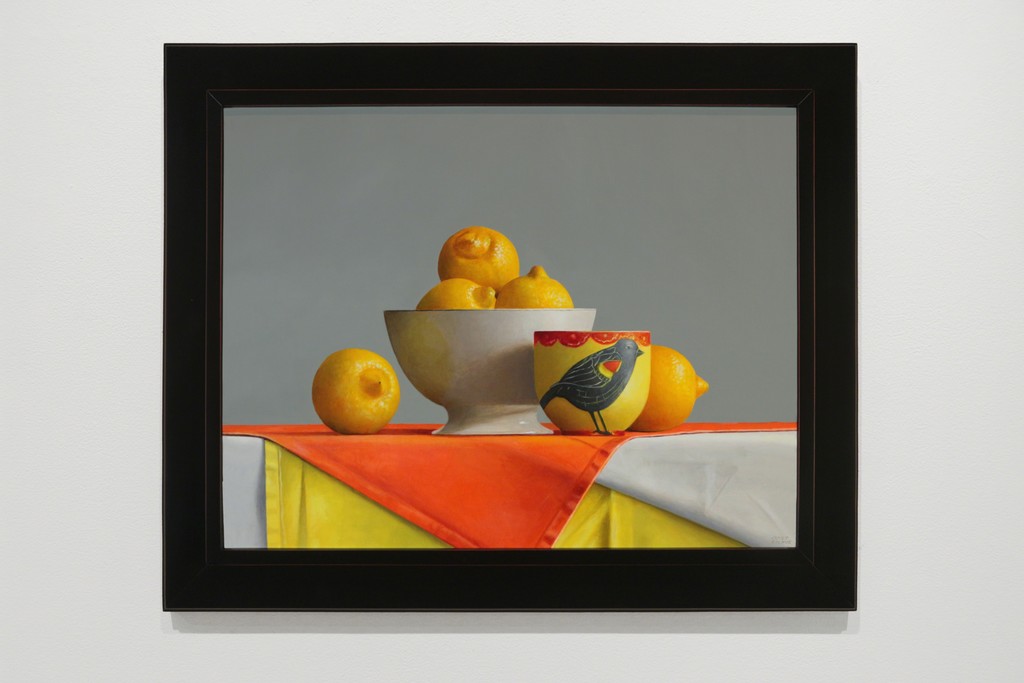 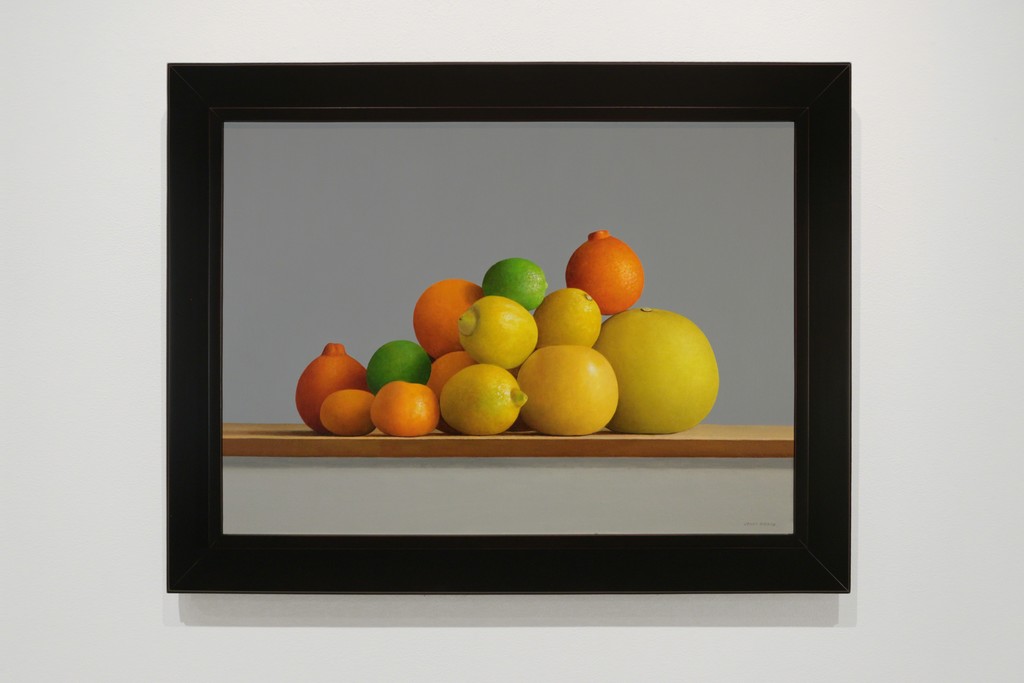 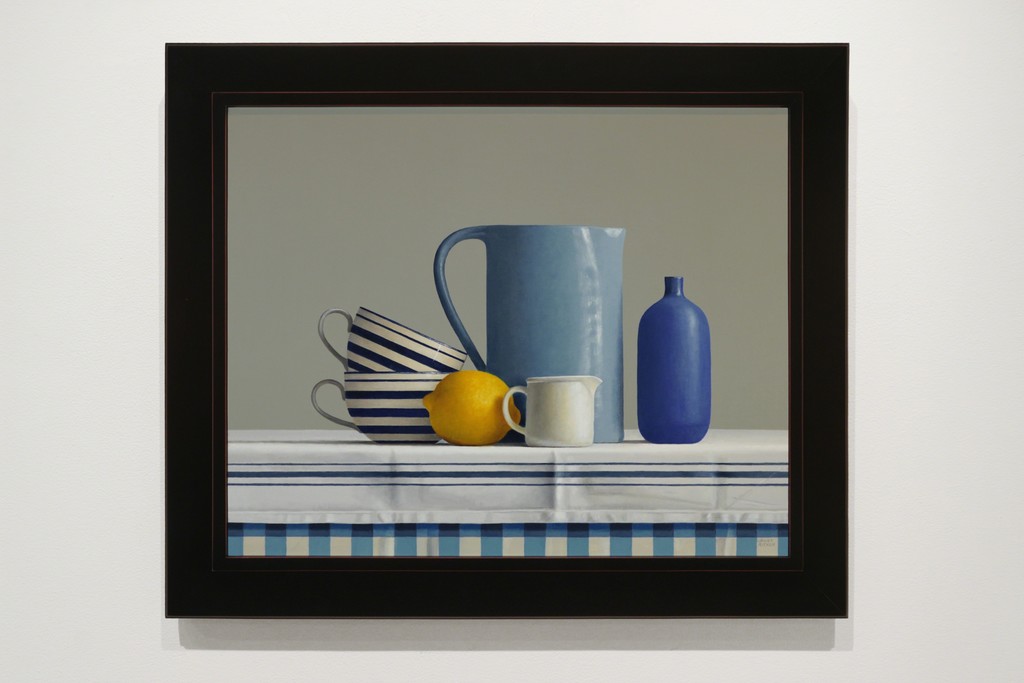 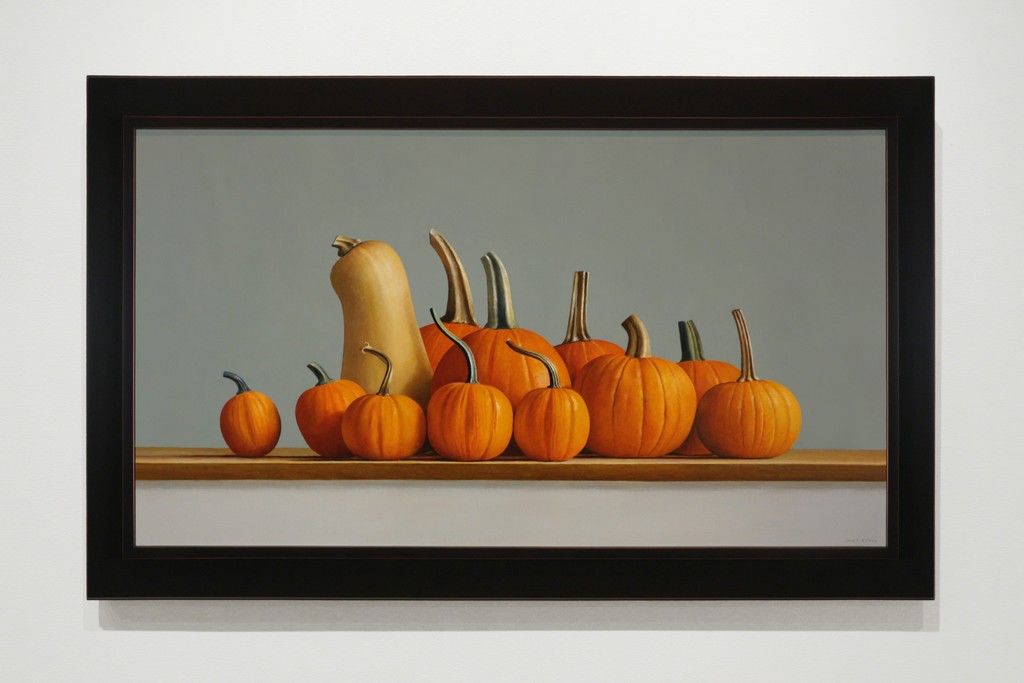 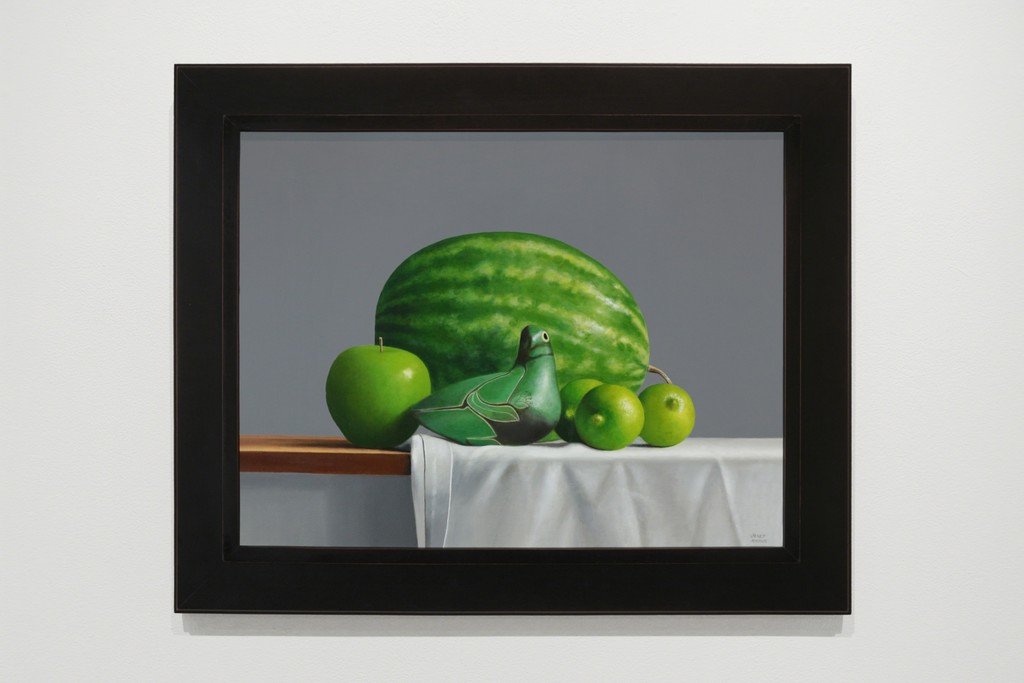 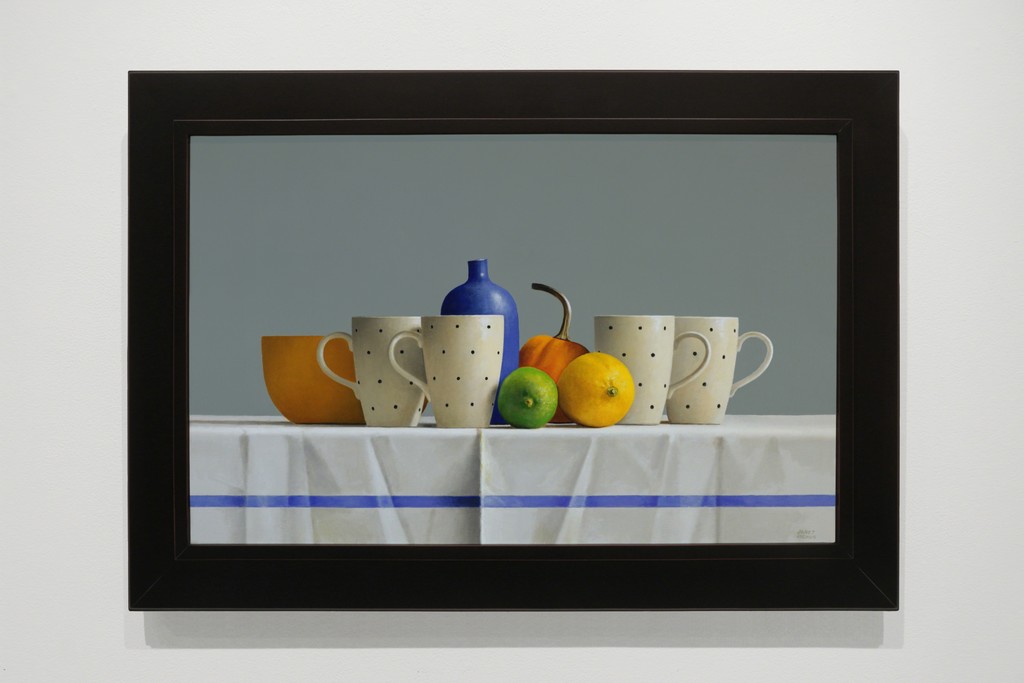 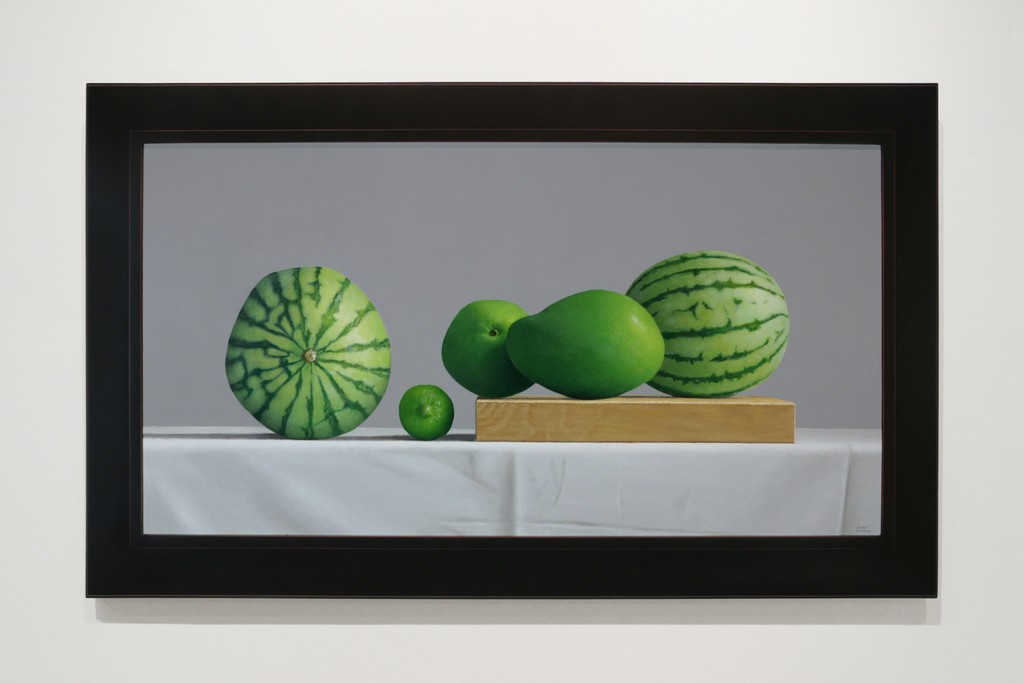 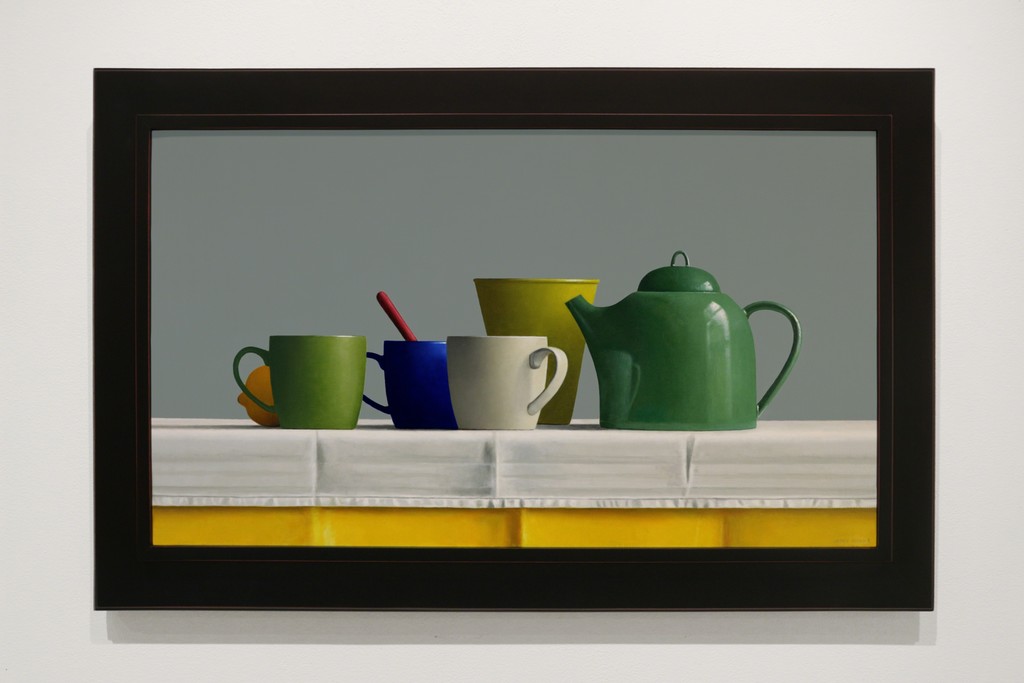 Gallery Henoch is pleased to announce the exhibition of works by Janet Rickus. Fourteen engaging paintings will be on view from September 7 – 30, 2017. The opening reception is Thursday, September 7th, from 6 to 8pm. The event is free and open to the public.

In her second solo show at Gallery Henoch, Janet Rickus posits that color is form. Rickus commands the viewer’s attention in still-lifes that set vibrant arrangements of objects against muted gray backgrounds. She delivers a clarified world filled with carefully placed ceramic bowls, cups, pitchers and a variety of fruits & vegetables that are absent of excess ornaments. Instead she emphasizes each color as a unique conduit for expression and form—be it a kelly green kettle, a cadmium hued lemon, or a royal blue coffee cup. The richness of her color helps isolate the forms, which are painted with crisp edges; consequently apples and vases reveal themselves as geometric shapes.

Her vivid compositions evoke sensations of love, wit, and other entanglements through careful selection and positioning of items. In Flattery round fruits are paired by color beside a piece of cylindrically shaped pottery – a rotund lemon just touches a stout yellow bowl for example. Rickus excites the imagination by fashioning a simple juxtaposition and repeating the pattern throughout the painting. This allows narratives to cultivate: I am soft, you are hard; I am wide, you are round; I am dark, you are light; aren’t we an odd couple? Simultaneously, each object also appears to stand alone, as if asking the viewer to consider it on its own terms within the larger composition. This is by design—Rickus’s still-life arrangements are often inspired by human relationships. “The way I have things touch and overlap and lean in my paintings is something I get from the way people relate,” Rickus says in John A. Park’s profile of the painter for The Artist’s Magazine January 2016.

Rickus, a native of Massachusetts, has been painting for more than 30 years. In 2006, Rickus was one of 11 state artists awarded a grant from the Massachusetts Cultural Council, which recognizes excellence in the arts and supports further development of their talents. Her paintings are represented in major public and private collections internationally.

An exhibition brochure is available.