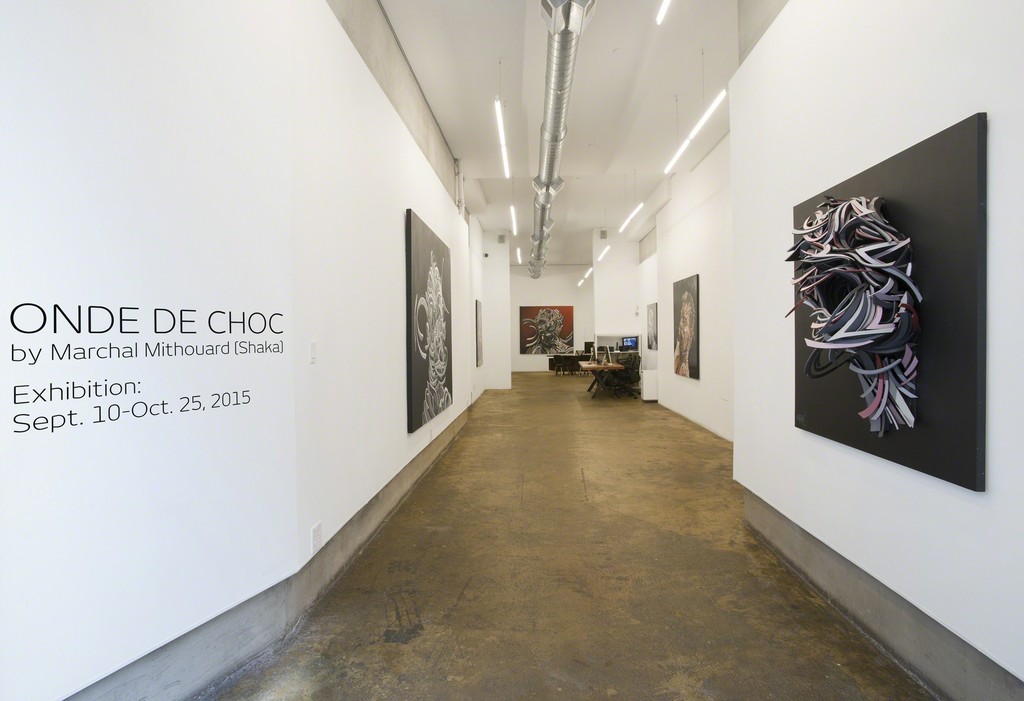 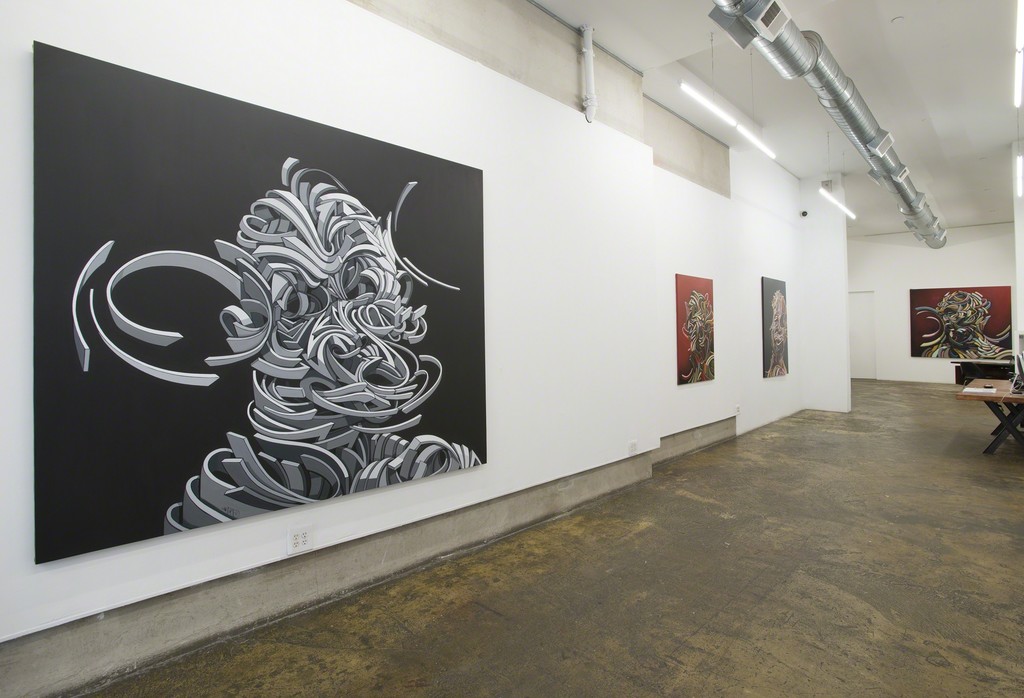 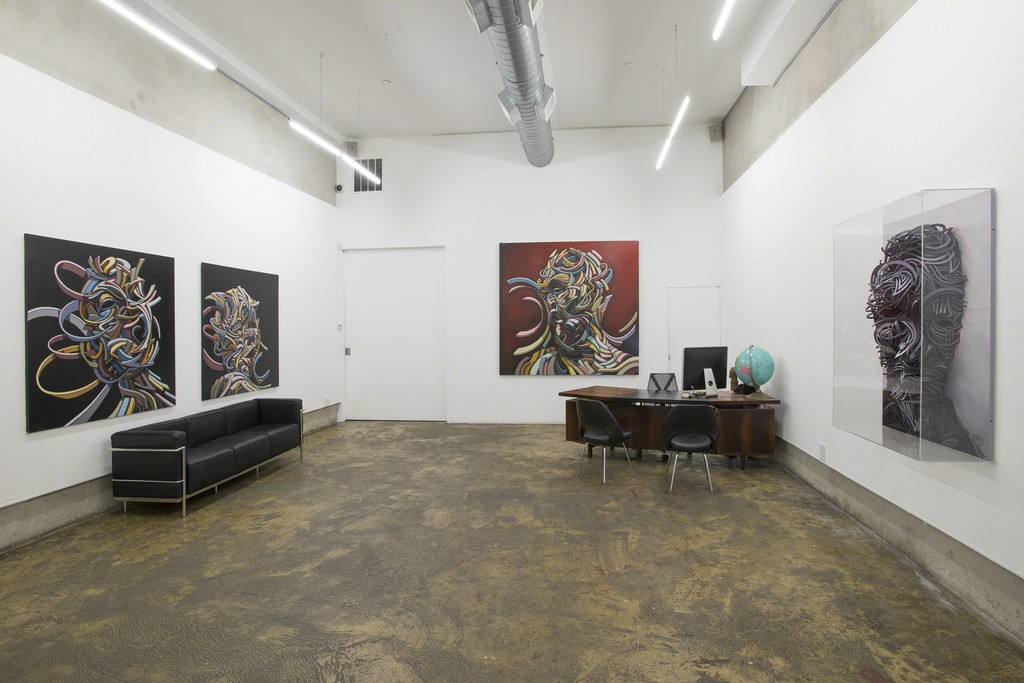 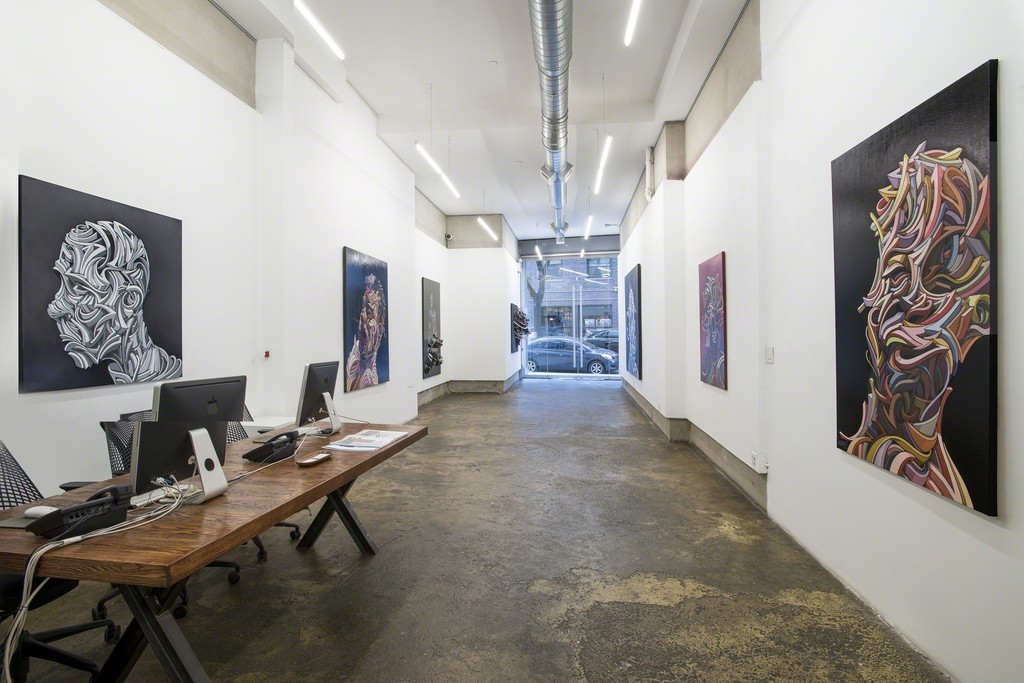 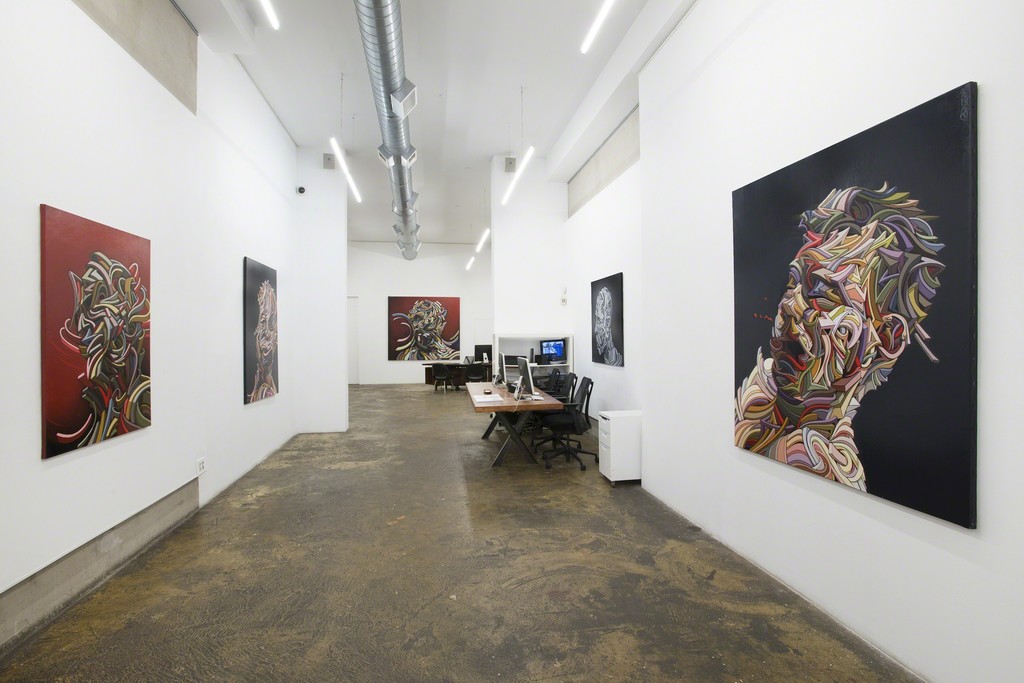 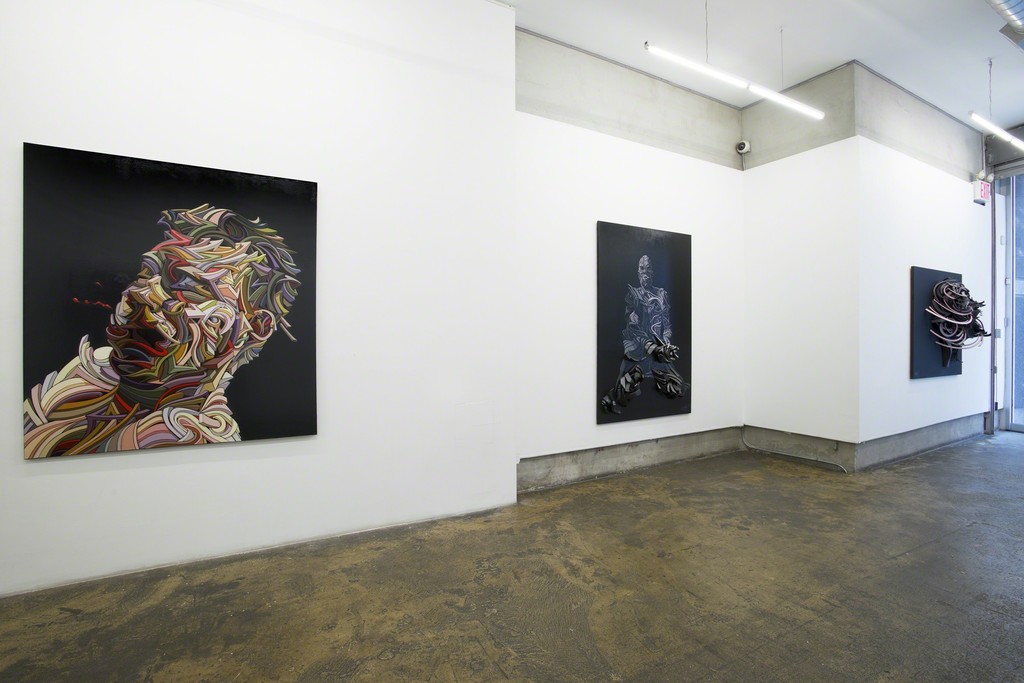 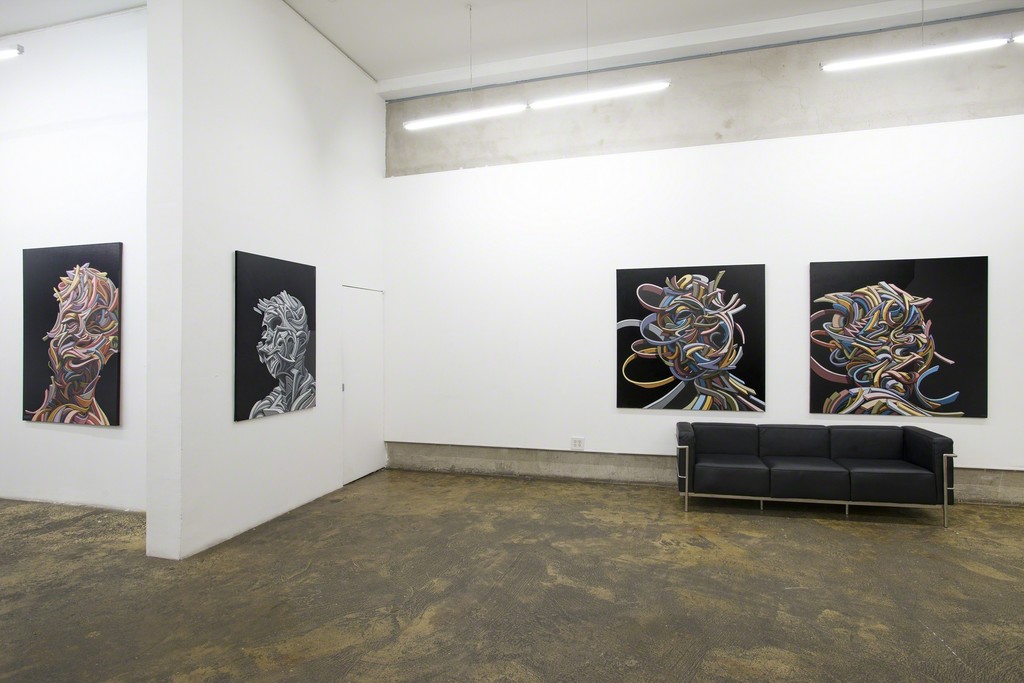 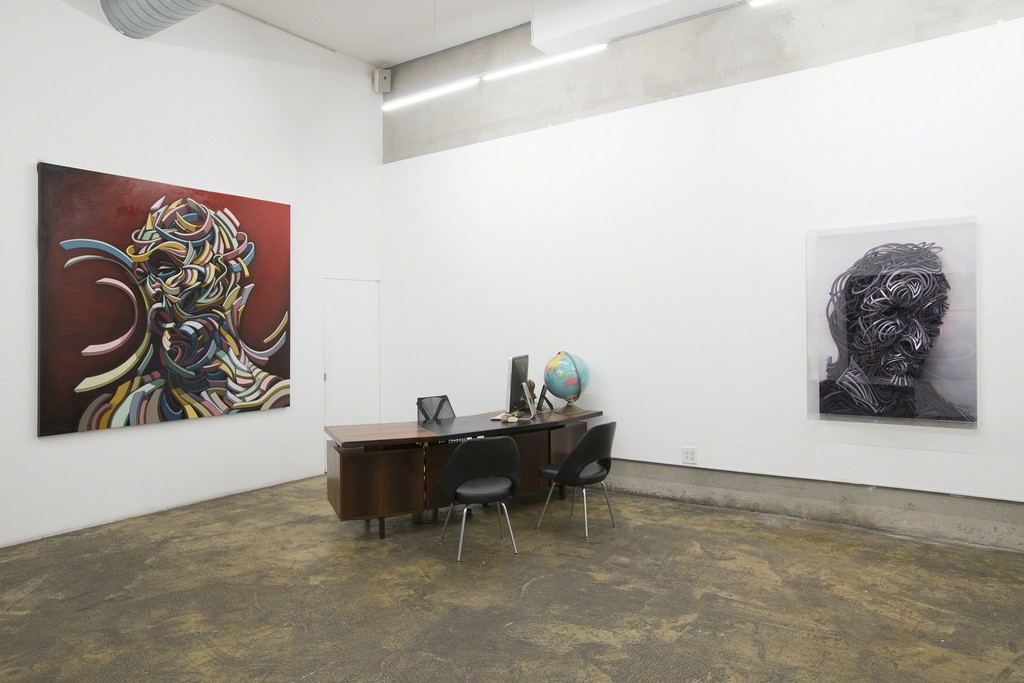 In his second solo exhibition in North America, Shaka further develops his exploration of the urban individual. The show’s title, Onde de Choc, which translates in English to shock wave, demonstrates Shaka’s continuing examination of the movement of the city as manifest in its inhabitants. The physical act of a shock wave throughout an urban sprawl is absorbed literally and figuratively in Shaka’s movement-filled, angular, darkly colored portraits.

Shaka’s Onde de Choc series shows varied moments of people in action, immersed in the impact of internal and external motion. The geometric faces possess a dark humanity, initiated by the shock of movement. Heads turning, reeling, and shaking come to life through sweeping lines and extended silhouettes. In Shaka’s signature bas-relief style, portions of the portraits extend outside of the canvas, furthering their dynamic energy.

His Onde de Choc series additionally showcases Shaka’s ability with deep-toned colors. Observing Onde de Choc 8, one is struck by the varied uses of red that serve as the background and accent tones of the work. The gradient that frames the portrait enhances the movement of the featured individual, as the face moves away from the visual plane evoking the sensations of a slow-motion whiplash. Even more muted palettes, like that present in Onde de Choc 4, composed entirely of greys, whites, and blacks, utilize the monochromatic color scheme to generate subtle energy.

The exhibition showcases Shaka’s continued engagement with form with pieces like Seppuku, Untitled 4, and Untitled 6, as well as a range of lithograph and etched prints. Seppuku demonstrates Shaka’s prowess with the full human form with limbs extending off the canvas and into the typically undisturbed viewing space. His ominous character is inspired by a ritualistic Japanese suicide: overcome with shame, the individual empties their contents through an almost surgical slicing of their abdomen. Seppuku serves as the catalyst piece of the show, most clearly demonstrating Shaka’s underlying fear of the effects of urban life: that the constant pressure of absorbing impacts of shock will turn upon itself in a necessitated type of purgatory.

His Untitled series explores the softer side of human alienation. Subtle lines create gentle faces, inquisitive in expression and form, despite their imposing stature. It is no coincidence that Shaka’s characters are all isolated in their embodiments; the urban landscape mandates a certain independence that Shaka, and the rest of society, is clearly still grappling with. How should one absorb the impact of their environment? What consequences will emerge from doing so?

Onde de Choc symbolizes Shaka’s continuing investigation of the urban world through an urban process. His use of industrial materials such as metal and spray paint serve as an expression of medium – his work is literally composed of the same materials that make up the architecture of a city. Simultaneously, Shaka’s work hones in on the individual experience: the singular person that comprises the social fabric, and all their innate doubts, beliefs, hopes, and fears. The shock wave that trickles through an individual eventually manifests in the world in which they live: as much as the shifting of tectonic plates could send a shock wave through a geographic location, so can one emanating from just one person.