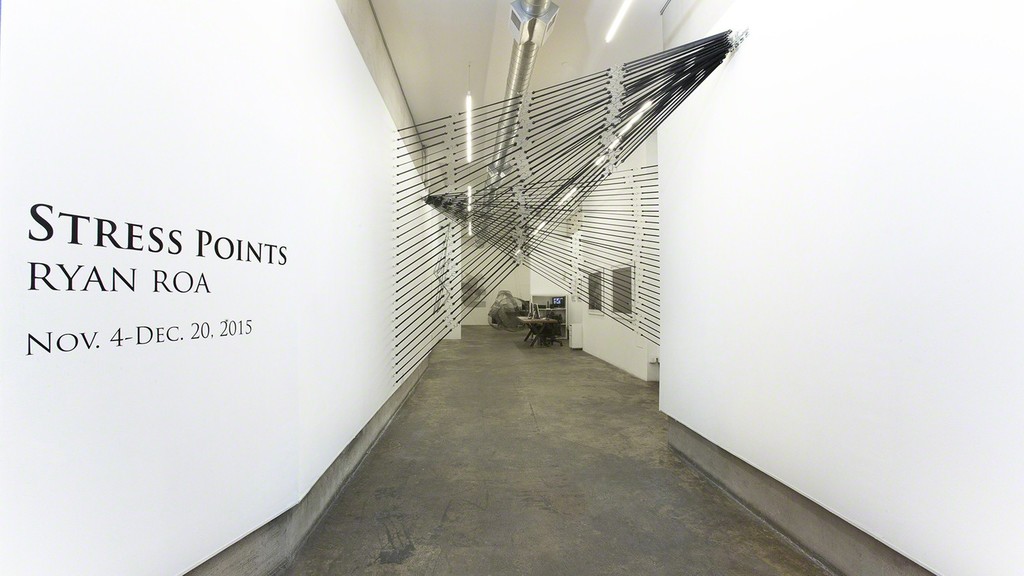 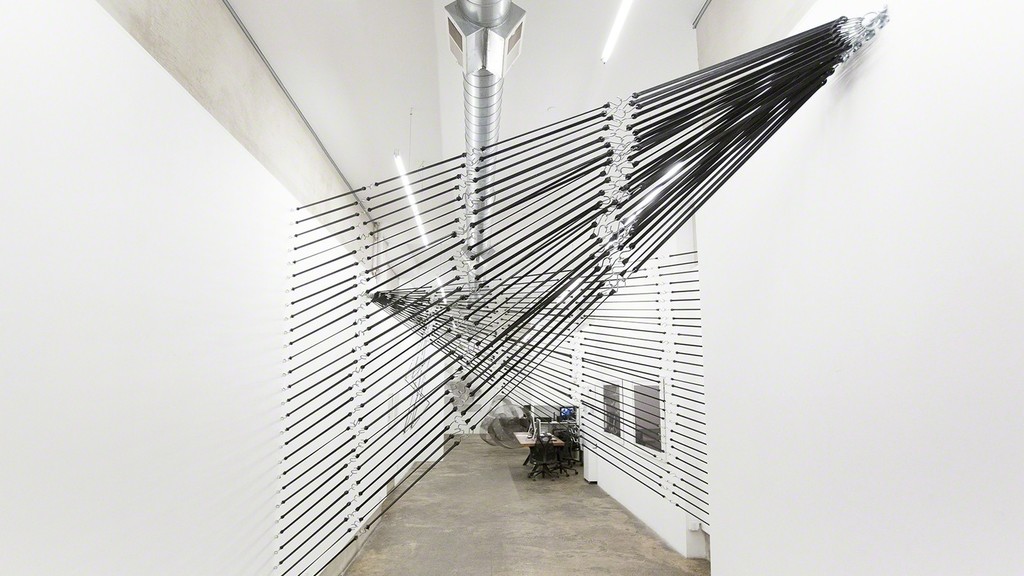 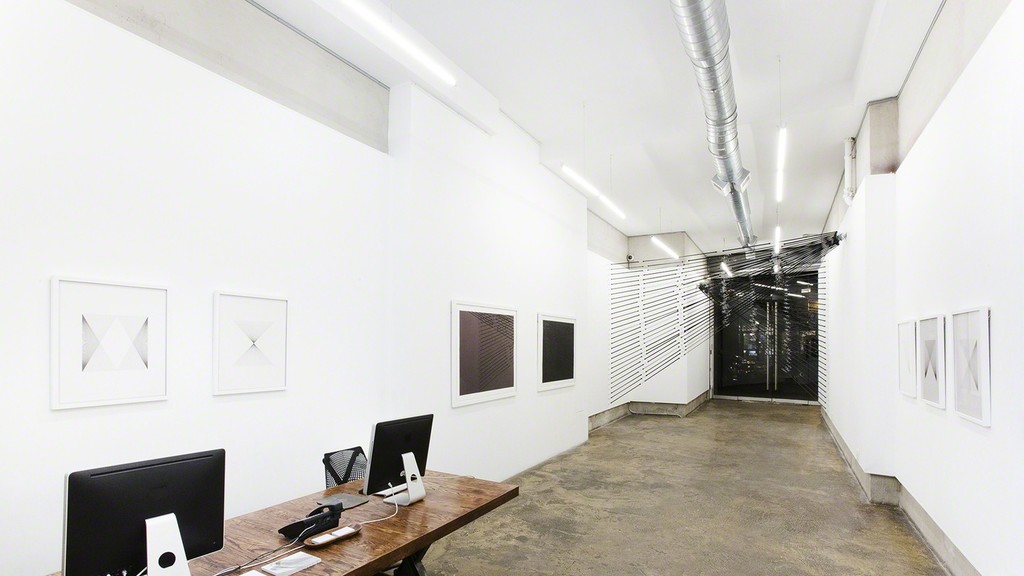 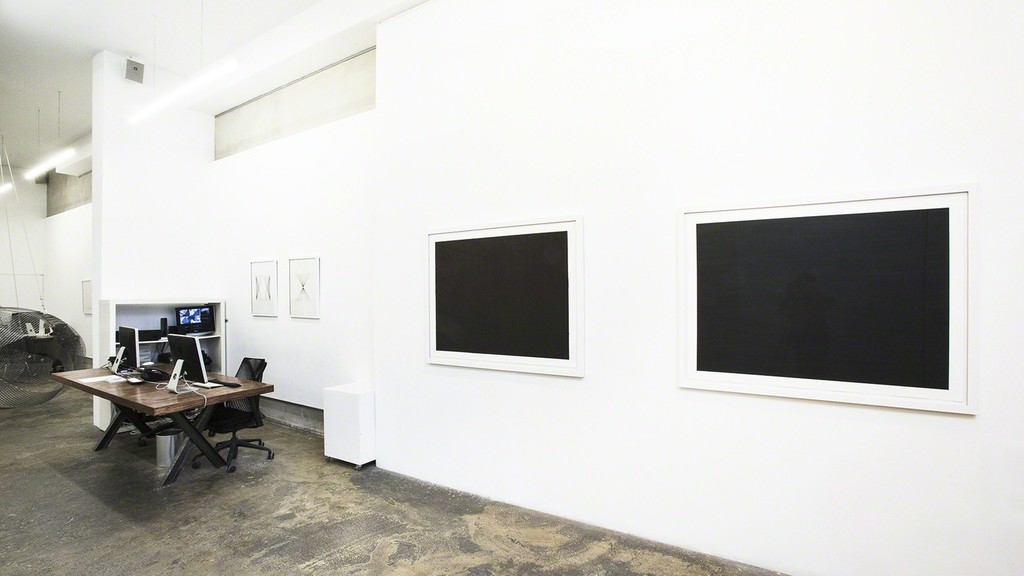 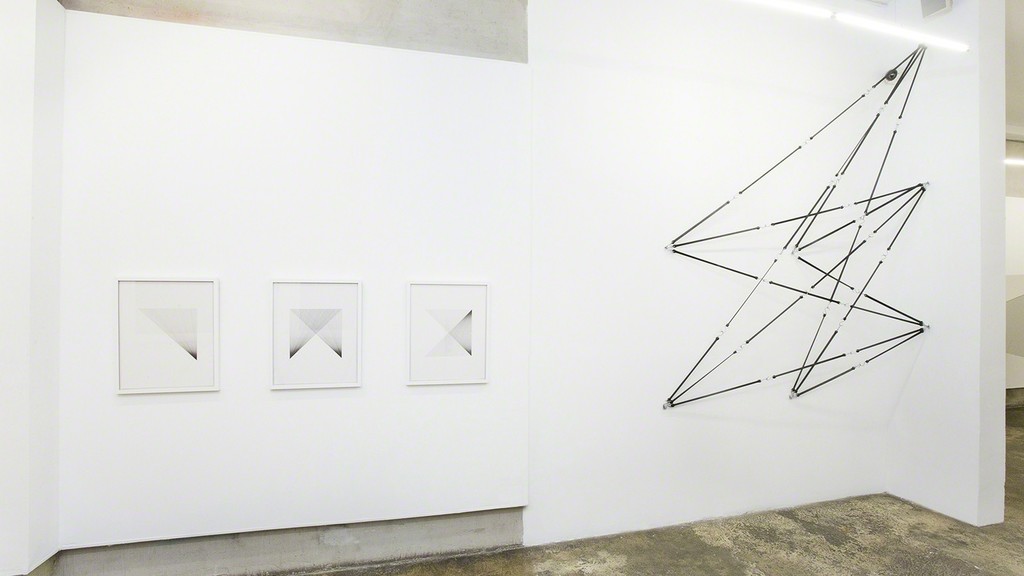 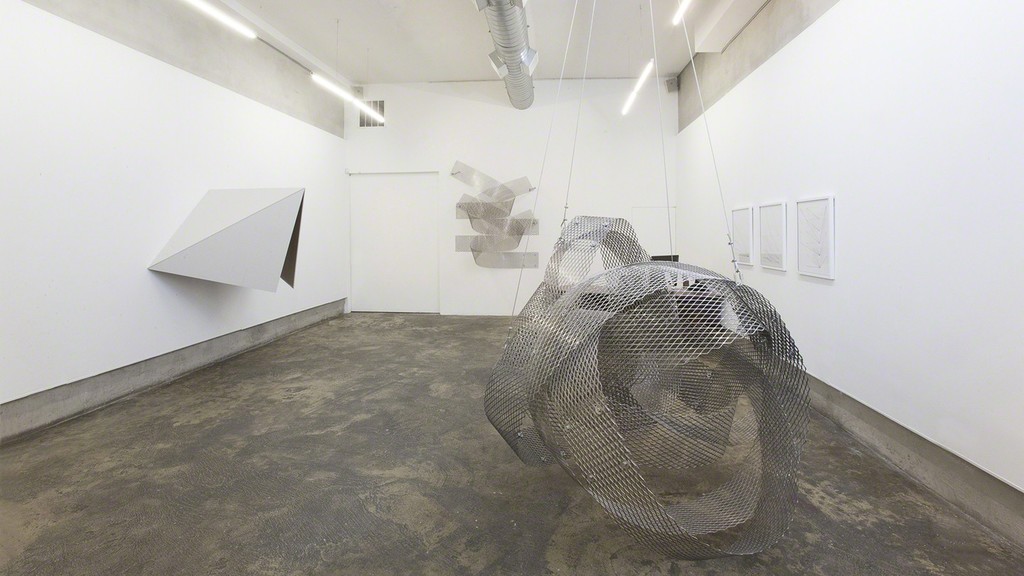 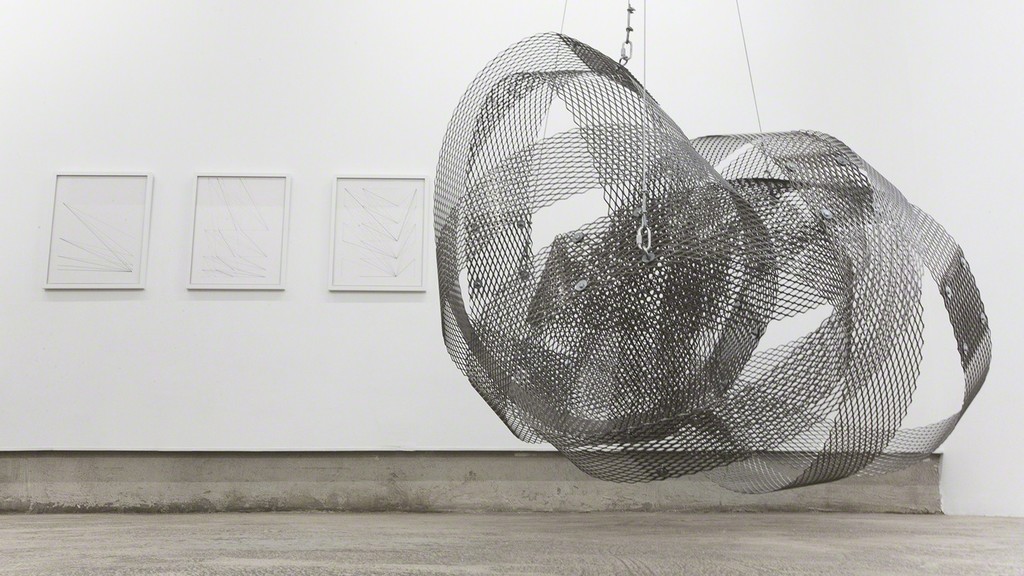 gallery nine 5 is pleased to announce the opening of Stress Points, a solo exhibition of new sculptures and works on paper by Ryan Roa. Continuing his investigation of testing the limits of industrial material against the artists’ own hand; straining the abilities of each. This friction is first aligned through a set of algorithms, which serve as the framework to the creation of his art, challenging mathematical concepts versus tangible execution.

Entering the gallery, the work immediately confronts the viewer demanding them to realize the physical space created by the artist, while cementing them to recognize their own physical dimension. Plane Drawing#2 is a three-dimensional manifestation of a geometrical algorithm; a set number of end points that extend to a line, causing two planes to intersect across the space of the gallery, creating one immediate visual effect by using interlocking bungee cords.

Matter, energy and their transformation are the basic principles of Physics and dictate Roa’s expression. His 12 x12 Line Drawing Series functions within a set of rules, connecting them to create precise lines and vectors that eventually compose a full portrait. Both his paper and sculptural works are precise and methodical. Playing on the notion of drawings, Roa purposely begins each Space Drawing at the horizontal site line of 60 inches to center extending the eye outwards and forcing our gaze away from the second dimension. Both Plane Drawing #2 and Space Drawing #40 are physical manifestations of the varying principles of physics.

The pulling of force is further visualized by Roa’s Charcoal Drawings Series. Here the void of light shrouds the viewer, engulfing them into the artists’ Event Horizon. Charcoal Drawings are the raw and aggressive push and pull of the material; the artist forcefully marks the paper by running his knuckles along the surface; viscerally recording his energy and physical strain.

Entering the back room of the gallery, the viewer is challenged with Roa’s expanded steel sculptures. Each sculpture is stretched taut with metal rods, cables and bolts, all representative of potential energy. Hanging from the ceiling, Expanded Steel Sculpture #5 works in congruence with the adjacent Drywall Sculptures. Gravity pressures each material and pushes it towards its limits.

The form of Expanded Steel Sculpture #5 reflects a new method of exploration for Roa as he visually defies the mass of the material leaving the feeling of a weightless, fluid-like sensation. Each its own physics experiment; Expanded Steel Sculpture Series enter into various stages of Roa’s process. Roa’s constant working and reworking of industrial materials displays the depth of knowledge and care that he applies to each of his works, whether large or small.

The multiple Drywall Sculptures expand Roa’s ability to play with gravity and industrial materials to further the conception of space. Each sculpture exhibited is composed of a single sheet segmented into various planes, precariously hanging off the wall. The sculptures teeter constantly on the edge of destruction and Roa utilizes the natural weight of the material to create a precipitous balance.

Roa’s Stress Points is an introduction into the artist’s world of constantly pushing his own physical boundaries against the laws of material and mathematics. Every element possesses its own characteristics, replete with parameters in which to work and barriers to push forward. Building off the foundation of each material’s unique nature, Stress Points conceptualizes and executes flat planes in a real-time environment, allowing the rules of the world to further dictate the actions of his outcomes.

Roa received his MFA at Hunter College, NY. His works have been exhibited in institutional and private spaces throughout the United States. After completing such prestigious residencies as The Fountainhead Residency in Miami Florida, and AIM 29 at the Bronx Museum, Roa has gone on to exhibit in major institutions like the Moscow Museum of Modern Art, Queens Museum of Art, Jersey City Museum, and Socrates Sculpture Park. He was selected by a jury to present at ArtPrize in Grand Rapids, Michigan, as well as in the El Museo del Barrio’s 2011 Biennale.