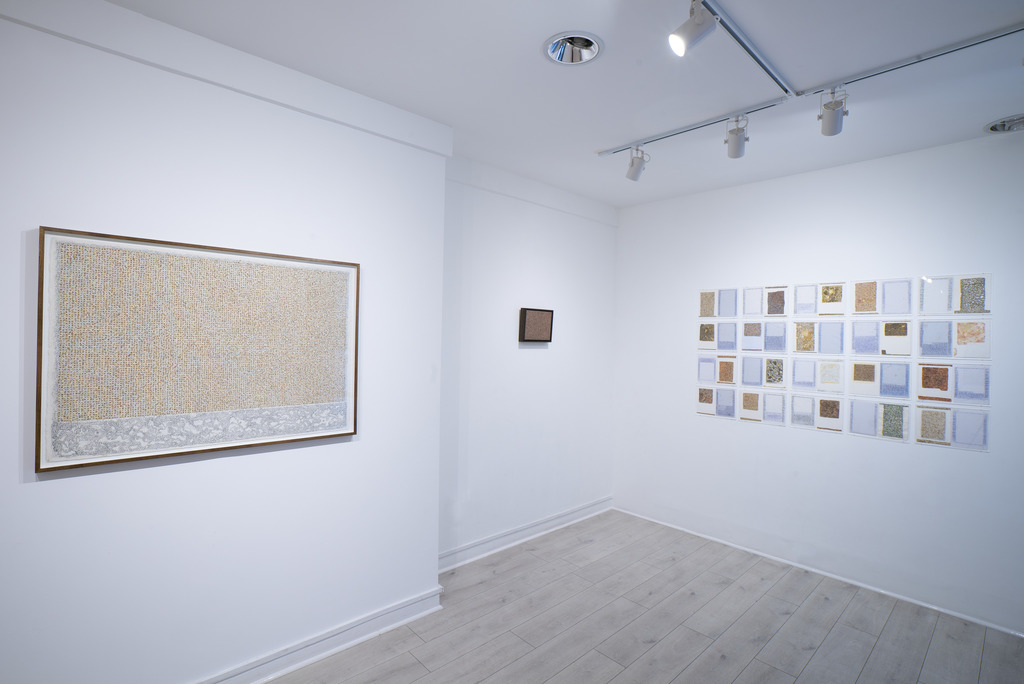 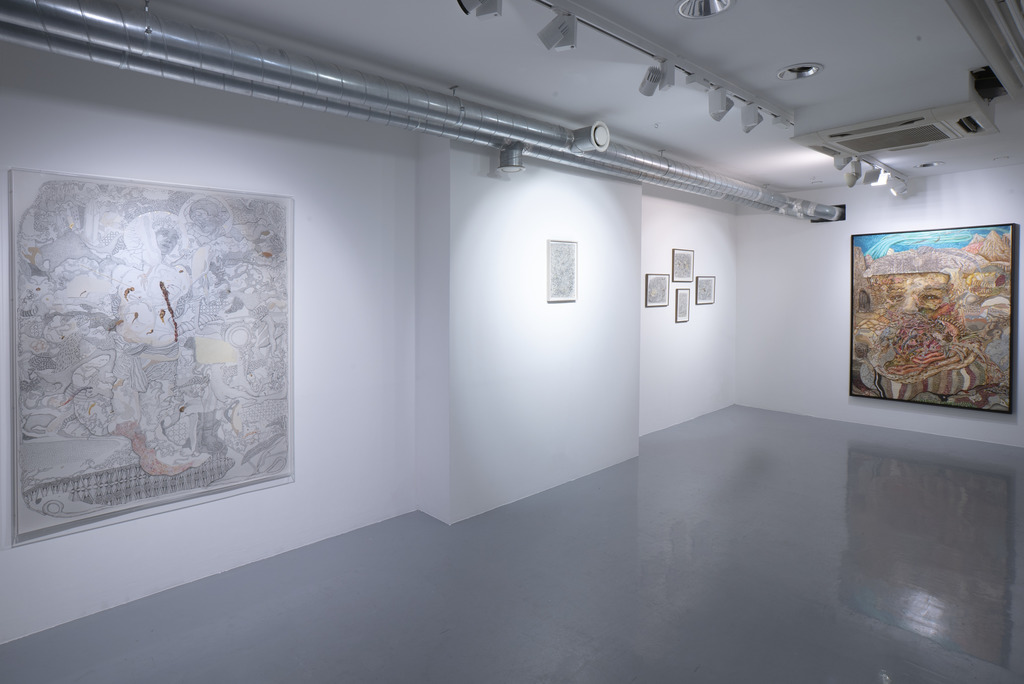 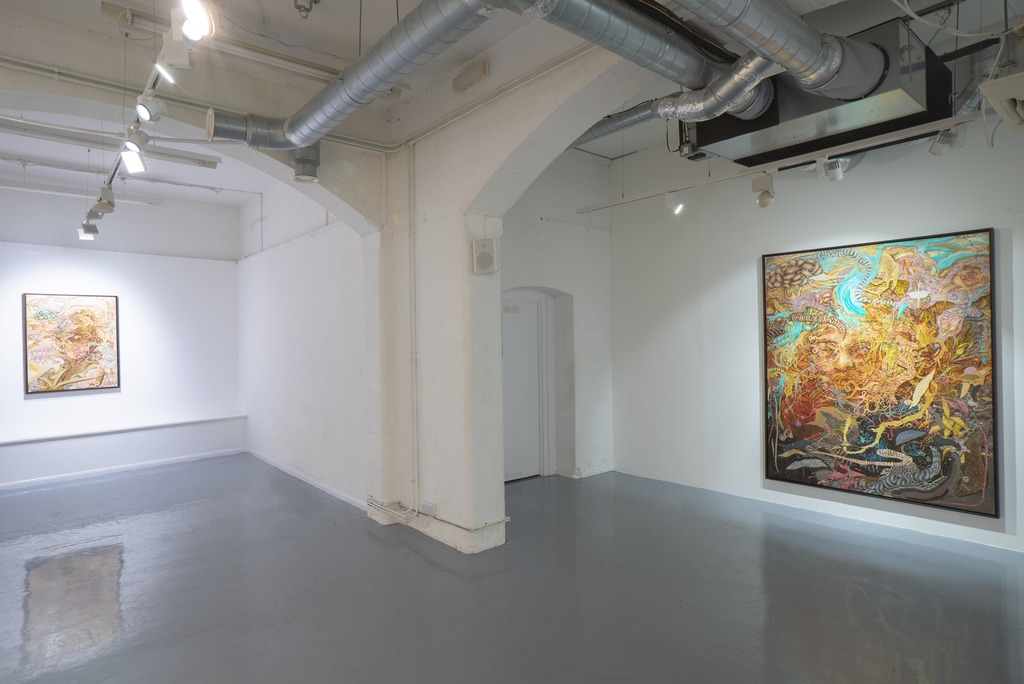 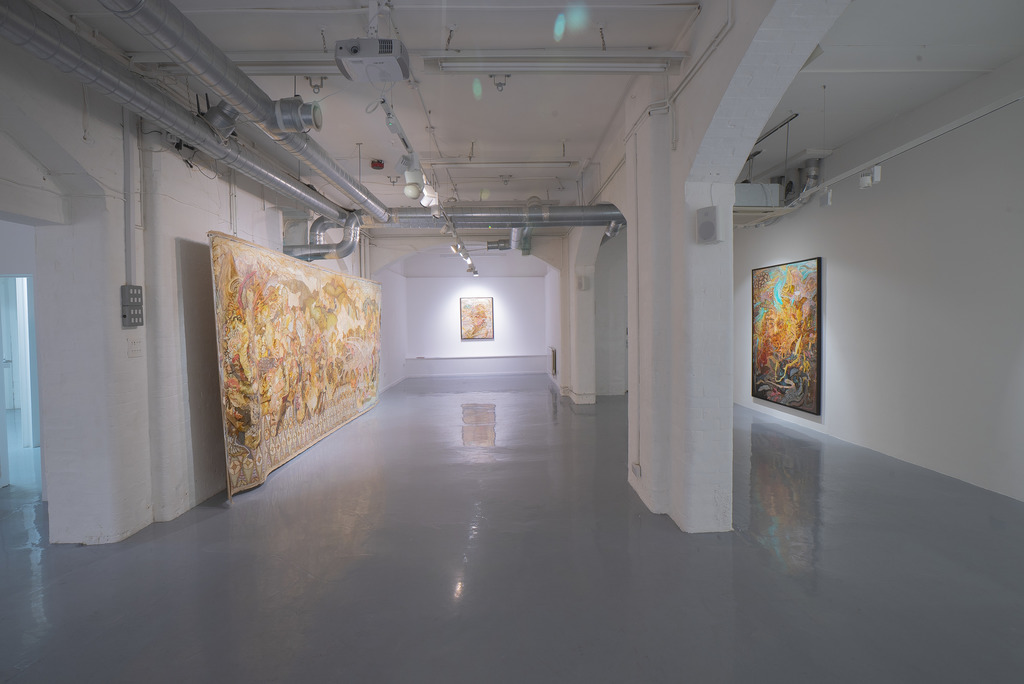 For his first solo exhibition in London, Radu Oreian has created a series of works on paper and paintings that continue his preoccupation with the myths and stories that shape our society and our understanding of humanity. Being human though, is as much about our fleshly, visceral experiences as it is about finding meaning, and so Oreian delights in the physical properties of the materials he uses: in the flexibility afforded by the humble pencil that can summon up gods or delineate wormy intestines, and in the chewy plasticity of paint that so readily evokes the corporeal.

The title of the exhibition: Microscripts and Melted Matters, clearly conveys Oreian’s twin concerns. The former is derived from the description of the diminutive text which the early 20th Century writer, Robert Walser created to record his novel, ‘The Robber’. So small and pared down is Walser’s script (each stroke is only one to two millimetres high and certain letters, such as ‘e’ and ‘s’ are represented simply by vertical or horizontal ticks), that until 1972, the text remained indecipherable and was believed to be uncrackable. Walser justified his eccentric shorthand by saying it was intended as a means of evading writer’s block, but as he suffered from schizophrenia and was in and out of mental institutions in the last years of his life, the script may also have originated in his illness.

For Oreian, the coded content reminded him of beautiful miniatures and old runes. He has already purloined from sources as diverse as Persian and Indian miniatures, Chinese mythology, the Rosetta Stone and Magna Carta. On this occasion though, he was moved to create twenty paired works entitled ‘Archives from the Other Side’ - partly inspired as a response to Walser’s script, but also as a direct engagement with the compulsive sketches of a Romanian artist called Emil, who was suffering from mental illness. Emil’s condition gave birth to entire copybooks where he would endlessly repeat the same shape, right throughout his life time. The beautiful, geometrical shapes that fill Emil’s books, very much resemble Walser’s Microscripts. Oreian took the original forms created by Emil and inverted their shapes, filling the resulting negatives with an organic, vectorial texture, thereby creating a ghost layer and continuing in a kindred compulsion.

In addition to this series, Oreian’s exhibition includes a number of highly detailed drawn miniatures. At first glance these intricate works resemble Persian manuscripts, but closer inspection reveals their content to be a melange from diverse contexts and mythologies interspersed with anatomical forms and geometric patterns.

Oreian has also produced a larger format drawing which he describes as: the 'Melting Archives'. It depicts an oneiric world which fuses myths and various imagery from different cultures. Most of these sources were photographed by Oreian himself during his travels. He collated them and squeezed them together to forge a collective history - a new narrative in which matter and its symbolic content appear to melt onto the surface of the paper.

The melting of matter is a physical process that intrigues Oreian. It’s not simply the transition of a substance from a solid to a liquid that captures the artist’s imagination, but the nature of transformation itself. Like a doctor observing a patient, Oreian uses his practice to bear witness to how heat dramatically alters the state and appearance of matter. This interest in science and chemical process has run like a thread throughout Oreian’s work. At times it is the chemistry of the human body that enthrals him, but overall Oreian is drawn to the sumptuous splendour of flesh, to glistening organ-like masses and minced pulp that resembles vermiculated meat. Despite the abject nature of a close inspection of the interior workings of the human body, Oreian’s painted visions hover at the borders of beauty. They tease us with glimpses of the grotesque, owe a debt to the Baroque in terms of their high drama and evocation of vanitas and are riven with a rich sensuality.

Again though, Oreian wrong-foots us. Just as we start to revel in the writhing mass of fleshy forms, he creates a calmly meditative room; a minimalist antechamber of vectorial paintings where instead of viscous organic matter, Oreian has dissected and shrunk the subject to microscopic proportions. The tiny paintings reflect the colours associated with flesh and blood, but their chromatic scale and pulsating intensity derives from the meditative journey that Oreian undertook in their execution. One of these works is inspired by the Upanishads - a collection of ancient Sanskrit religious and philosophical texts that became the foundation for Hinduism. Oreian attempted to search for the infinity in each of the thousands of little dots depicted in this painting, thus exploring the notion that if you divide a point as fine as a hair into a hundred, and then into a hundred again, you will still witness the infinity of creation.

Oreian has a love and respect for antiquity. Travels to Greece and Italy saw him wandering through preserved and ruined temples, caves, churches and tombs filled with intricate mosaics, Roman frescoes and Renaissance paintings. The three large format portraits he created are based on these experiences; a wonderful confusion of fragmented memories and thoughts of other travellers who had gone before him: the English Romantics, Goethe and Brueghel the Elder - who used his experiences to create fantastical hybrid landscapes which married the Low Countries with the snowy Alps.

The largest space of Oreian’s exhibition is appropriately reserved for the biggest and most physically impactful work: ‘The Last Agora’. The debates between philosophers in Ancient Greece have shaped human thought, artistic, social and political systems right into the present day. For Oreian, paintings serve as a rich ground where historical events, myths and ancient images can meld with contemporary surroundings. The artist used his 5.5m wide canvas to imagine how the last Agora would look today. He transposed eleven ancient figures into the present. To combat boredom, Oreian has depicted them playing the games he used to play in childhood in Romania - leapfrogging and climbing over each other until the figures become melded into one amorphous mass. As the bodies tumble over each other it becomes impossible to distinguish whose body is whose. Oreian likens the effect to a Beckett play where everything feels familiar yet it’s almost impossible to pinpoint exactly why: melted matter indeed.