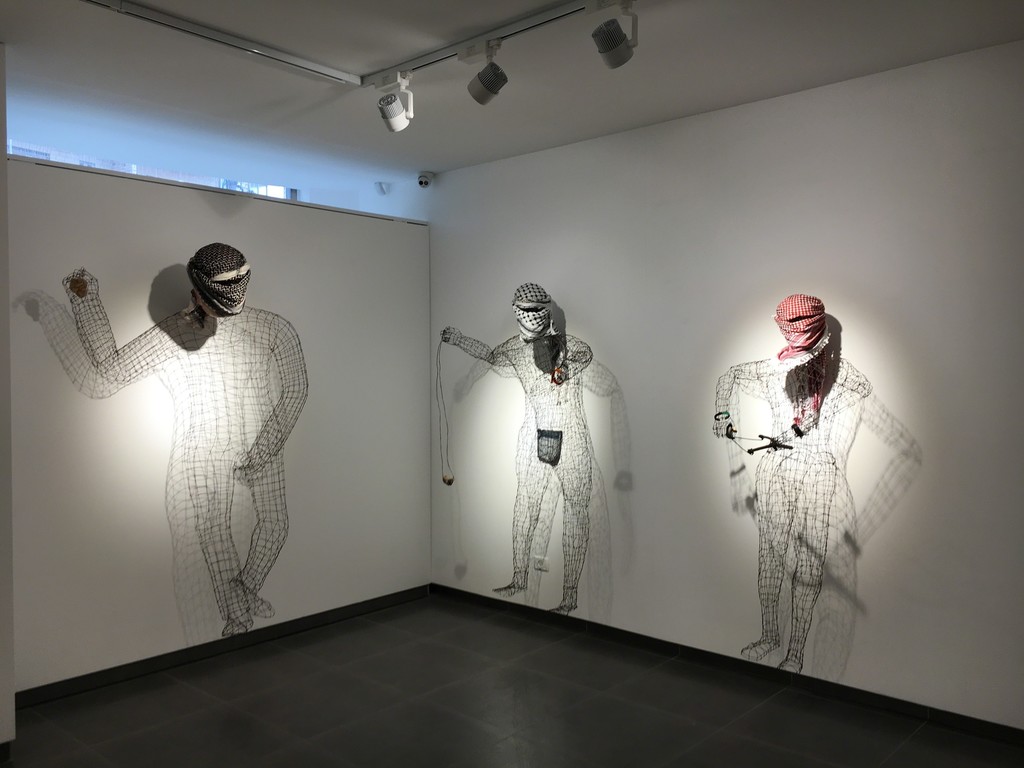 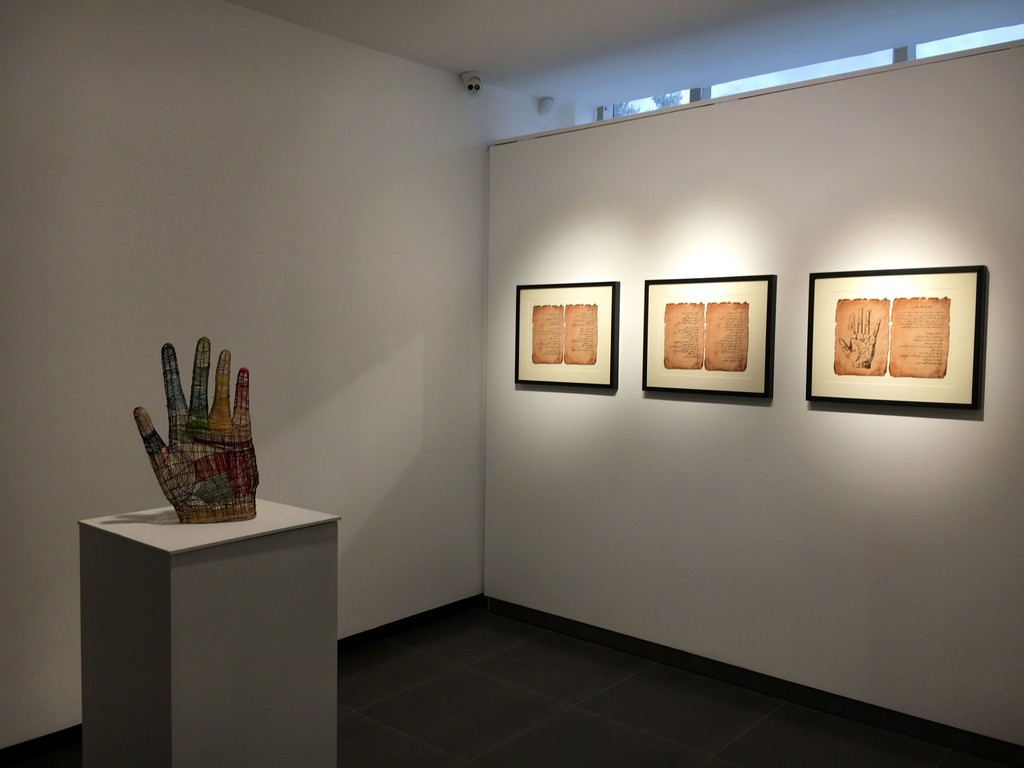 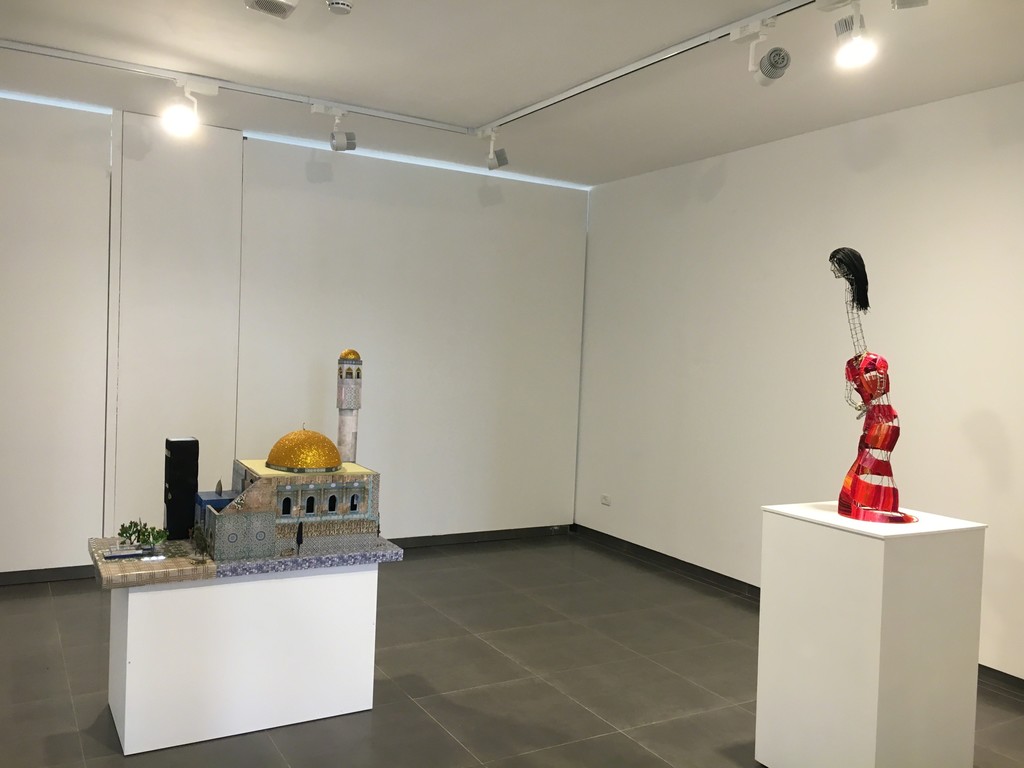 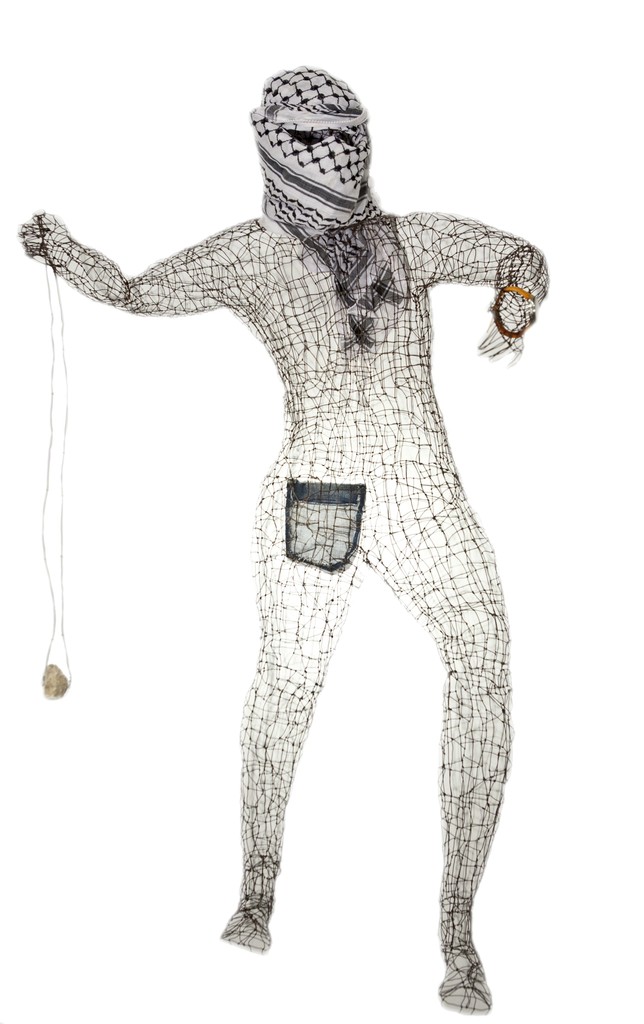 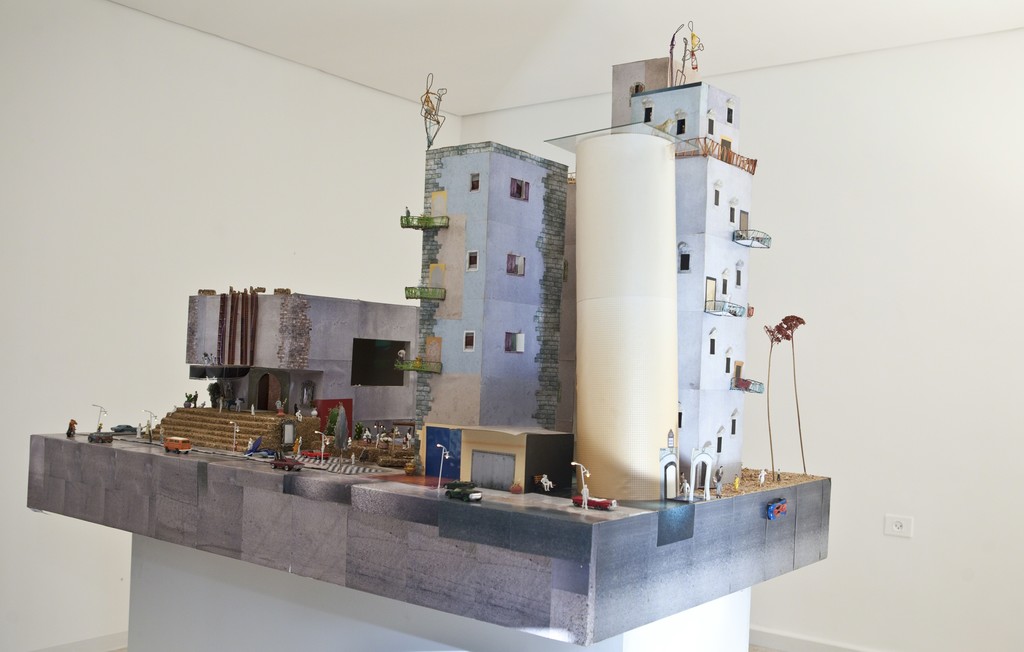 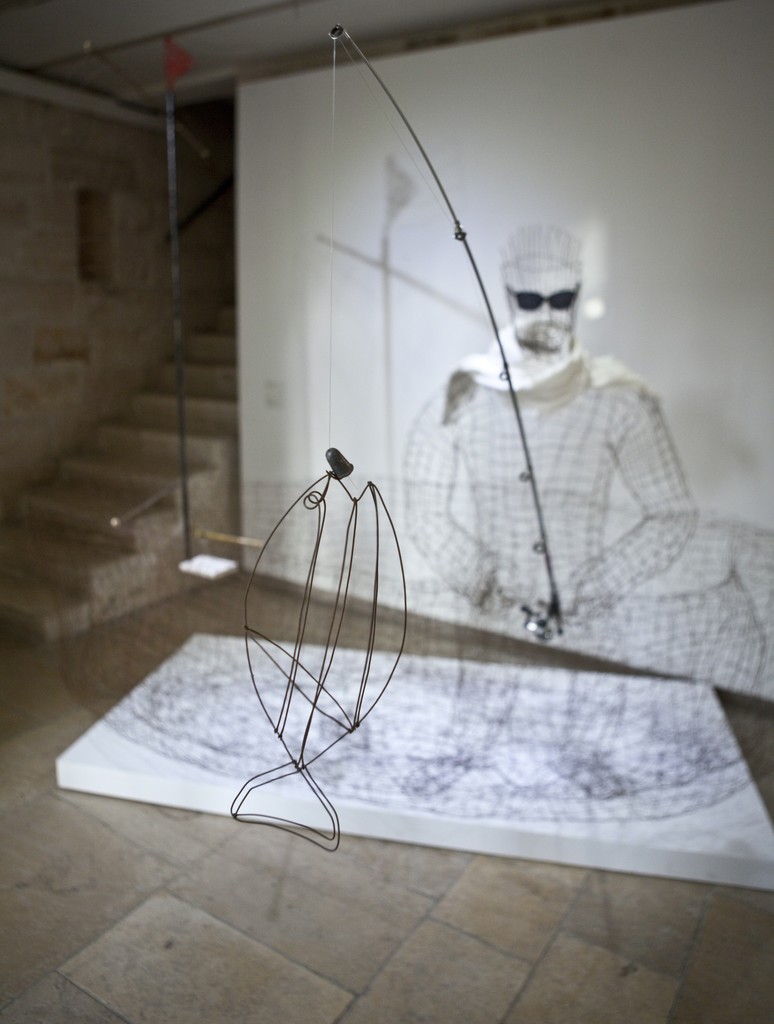 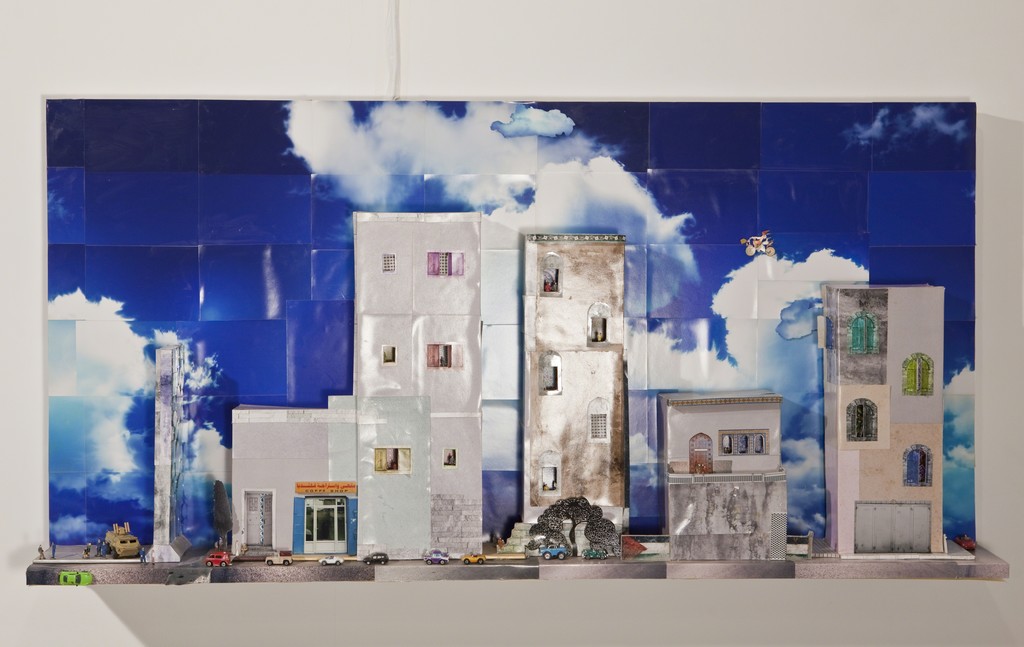 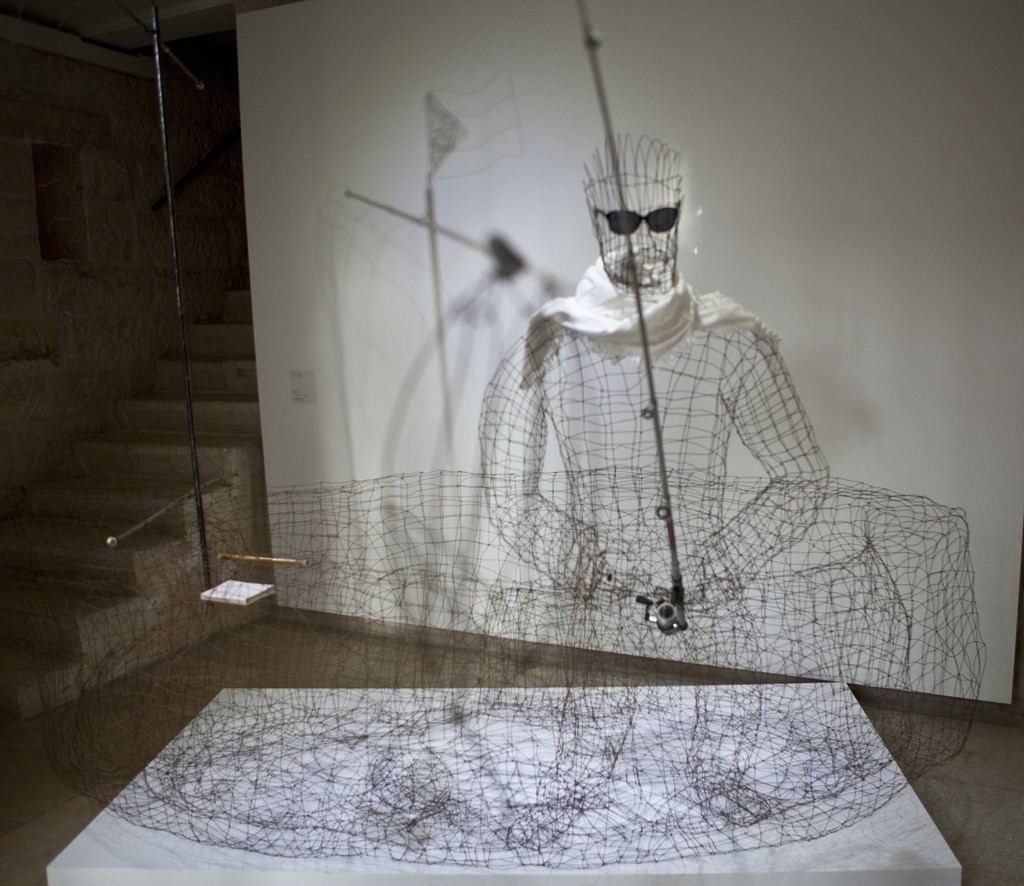 Wafa Hourani, who lives and works in Ramallah, attempts to reshape the world through magic and illusions. This exhibition encompasses a selection of works that offer a glimpse at Wafa’s Hourani artistic journey over the last fifteen years. His practice has embodied elements of film-making, photography, architecture and graphic design. His large sculptural series Future Cities comprises three future scenarios of Qalandia refugee camp. His depictions of 2047, 2067, and 2087 – all monumental anniversaries in the history of the Palestinian struggle for freedom – are portrayals of the refugee camp in its present state.
In his Future City series, Wafa revisits the utopian genre to produce architectural models of major cities as he envisions them 50 years from now, including sociological, environmental and behavioral parameters in subjective and emotional forecasting models.

Similarly, The Only and Lonely Mosque is an architectural model accompanied by sculpture and photography to form an imaginary mosque. Hundreds of photographs of mosques from all over the world were gathered, cut, and pasted to create a work that symbolizes unity among Moslems from many cultures and includes architecture and art – in one mosque named The Only and Lonely Mosque. The void spaces this work contains symbolize a spiritual emptiness within Political Islam and show the stark loneliness from which Moslems are suffering these days.

Cinema Dunia is a scale model that contains a real movie screening and small figures watching a video collage edited from the Palestinian Cinema Archive. Imaginary film posters hang as witnesses of a History of Palestinian Cinema that never happened. There are small human figures in the streets, lights and sounds, even film screenings. The installation offers a miniature futuristic projection of the now destroyed cinema building.

While Wafa Hourani depicts Palestinian cities and refugee camps in miniature, inversely the characters living in those cities are large both in scale. For instance, the characters made from wire and thread have very tall necks because according to a fictive Darwinian theory, Palestinians would grow tall necks in order to adapt to living behind the apartheid wall and to be able to look beyond it.
There are other works that show large fantastical sculptural characters made from wire, such as the London 2068 (2009), a monument in the form of a pregnant woman standing for Big Ben. Hourani claims that in 2068, the speed of the earth’s rotation will ascend and cause time to shrink so that the days will last only eleven hours. This will causes Big Ben to become inaccurate and obsolete – to the utter anger of the British who take pride in their monument of precision. Thus, Big Ben is replaced by the wire sculpture of a woman whose pregnancy is to show proof of the movement of time.

In Palestine Martial Arts, the artist has produced thirteen sculptures made of rusty metal wires depicting men and women of life-sized proportion. They are shown standing while in the process of throwing stones, a posture familiar since the First Intifada of 1987 in a form of self-defence that has become known as typical Palestinian: Palestinian martial art, comparable to Karate for the Japanese, Kung Fu for the Chinese, and Capoeira for the Brazilians.

Wafa Hourani currently lives and works in Ramallah. His art and work has been shown in the Istanbul Biennial (2009), Disorientation II, Abu Dhabi (2009), Saatchi Gallery, London (2008), and the Thessaloniki Biennial (2007) and is exhibited in major international collections that include The Archaeological Museum, Thessaloniki, Greece; Saatchi Gallery, London, UK; ADACH, Abu Dhabi, UAE; and the Nadour Collection.