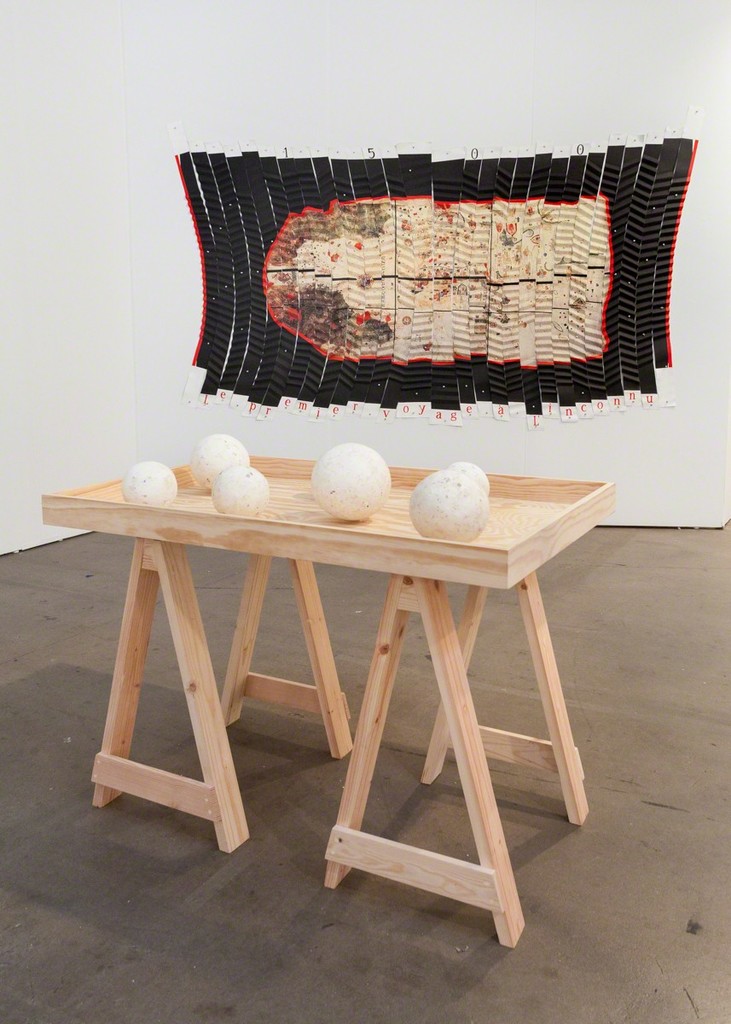 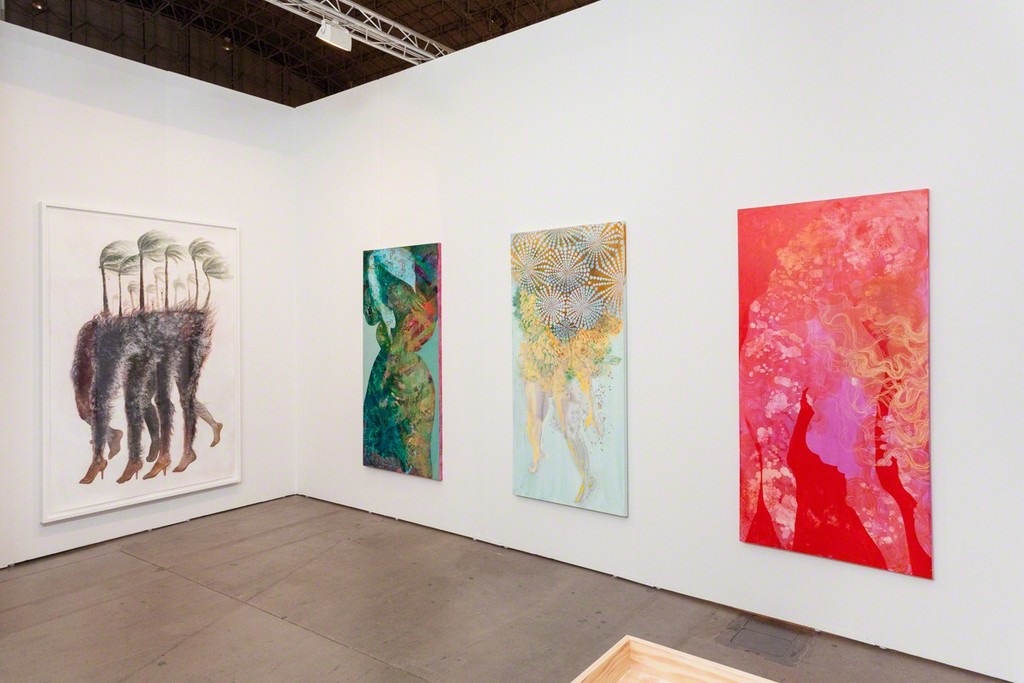 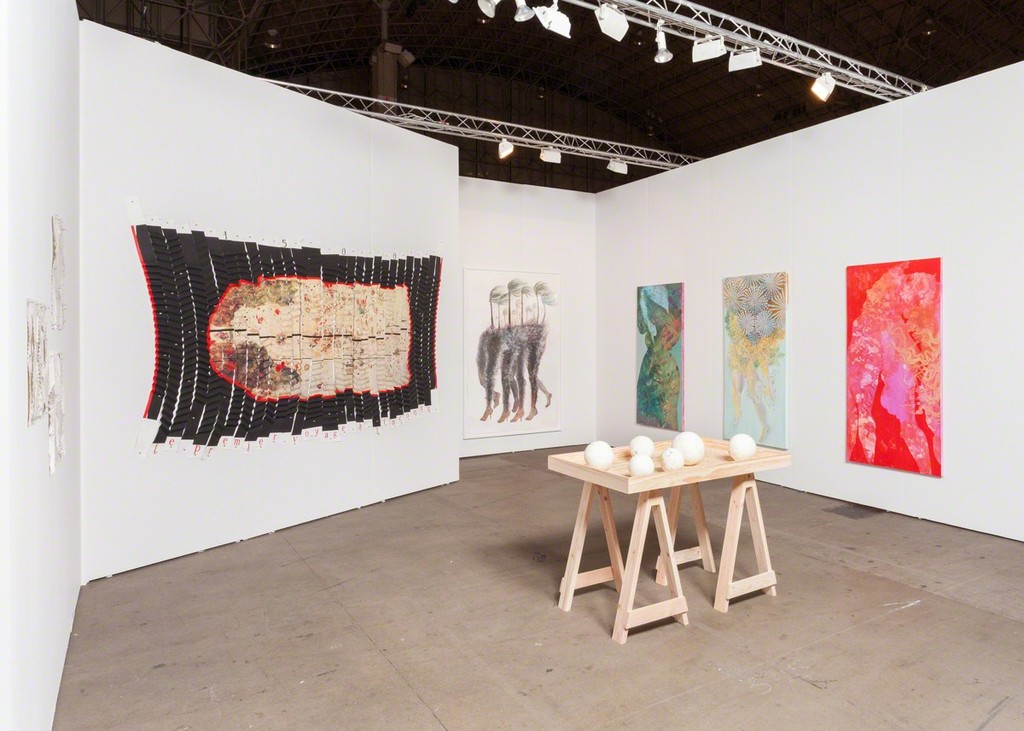 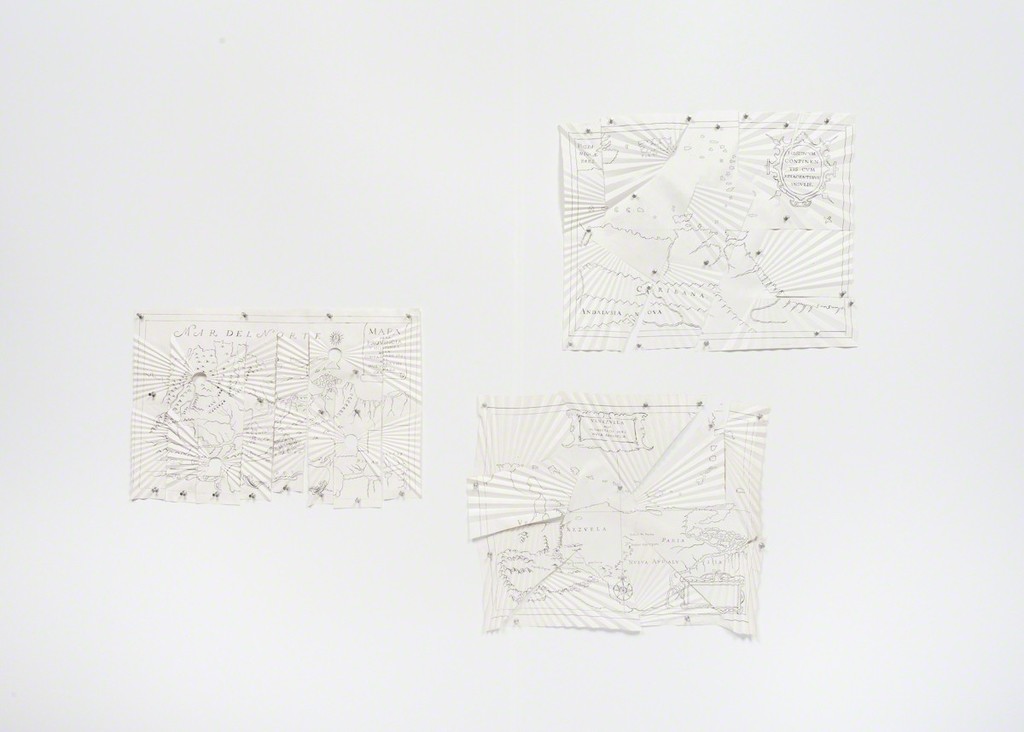 June 10, 2016 – San Francisco – For EXPO Chicago 2016, Gallery Wendi Norris is pleased to present a two-person booth with gallery artists: Firelei Báez and Miguel Angel Ríos. In addition, a selection of public artworks by Ríos, curated by Daria de Beauvais, Curator, Palais de Tokyo, and by Julio César Morales, curated by Diana Nawi, Associate Curator, Pérez Art Museum Miami, are included as part of IN/SITU, Expo Chicago’s program of public artworks. Báez’s new and vivid large scale paintings on canvas and paper pair with Ríos’s rarely exhibited folded maps from his signature series from the late 1990’s. For IN/SITU, Ríos presents new video work while Morales exhibits six site-specific, text-based banners and vinyl artworks throughout the fair and in the Expo’s lounge sponsored by Wansas Tequila. Each artist re-writes historical narratives from Latin American and/or the Caribbean as a means to examine how the body is subjugated today under various conditions—be it colonialism and identity politics in the case of Báez, forced and dangerous migratory conditions in the case of Ríos, or underground economies in the case of Morales.

ABOUT FIRELEI BÁEZ
Firelei Báez was born in Santiago de los Caballeros and lives and works in New York. She makes intricate works on paper and canvas that are intrinsically indebted to a rigorous studio practice as well as large scale sculpture. Through a convergence of interest in anthropology, science fiction, black female subjectivity and women’s work; her art explores the humor and fantasy involved in self-making within diasporic societies, which have an ability to live with cultural ambiguities and use them to build psychological and even metaphysical defenses against cultural invasions.

Báez received an M.F.A. from Hunter College and a B.F.A. from The Cooper Union’s School of Art and studied at The Skowhegan School of Painting and Sculpture. She has had solo exhibitions at the Utah Museum of Contemporary Art and at Pérez Art Museum Miami. In 2016 and 2017 she will participate in group and solo museum exhibitions including Vessel of Genealogies, Tarble Arts Center, Eastern Illinois University, Chareston, Illinois, Africa Forecast: Fashioning Contemporary Life, Spelman College Museum of Fine Art, Atlanta, Georgia, and Firelei Báez: Bloodlines at The Warhol Museum, Pittsburg.

She has held residencies at The Headlands, The Joan Mitchell Center, The Fine Arts Work Center, The Lower East Side Print Shop, and The Lower Manhattan Cultural Council Workspace. Baez’s work has been written about in The New York Times, The Los Angeles Times, Art in America, New American Paintings, The Huffington Post, Studio Museum Magazine and is featured in the Phaidon contemporary drawing anthology Vitamin D2. Her work has been exhibited by the New Museum, the Pérez Art Museum Miami, the New Orleans Biennial Prospect.3, Taller Puertorriqueño, Ruth and Elmer Wellin Museum of Art, The Drawing Center, the Bronx Museum and The Studio Museum. Her work was featured in the United States Biennial Prospect.3 in New Orleans, curated by Franklin Sirmans.

She has been the recipient of the prestigious Joan Mitchell Painters and Sculptors Award, the Jacques and Natasha Gelman Award in Painting, the Catherine Doctorow Prize for Contemporary Painting, and the Chiaro Award from the Headlands. In 2015 The Pérez Art Miami Museum published Firelei Báez: Bloodlines, with an introduction by the museum’s Director, Franklin Sirmans, an essay by Assistant Curator María Elena Ortiz, an interview with Naima Keith and a contribution by writer Roxane Gay.

ABOUT MIGUEL ANGEL RÍOS
Miguel Angel Ríos studied at the Academy of Fine Arts in Buenos Aires before moving to New York in the 1970s to escape the military dictatorship in Argentina. He subsequently relocated to Mexico and now divides his time between the United States and Mexico.
In his work, Ríos pairs a rigorous conceptual approach with a meticulously constructed, handmade aesthetic. Since the 1970s, he has made work about the concept of the "Latin American," using this idea as both an artistic strategy and a political problem. In the 1990s, he began creating a series of maps which he carefully folded and pleated by hand. Marking the 500th anniversary of the "discovery" of the Americas, the maps indicate long histories of power and colonial experience, and they reference traditional indigenous arts in the Americas, including the Andean quipu.

Since the early-2000s, Ríos has also delved into the medium of video to create symbolic narratives about human experience, violence, and mortality. His videos of spinning tops--trompos--use the childhood game of tops as a backdrop for a meditation on the transience of life, and the mechanics of power. In his 2012 Untitled video from The Ghost of Modernity, Ríos references high Modernism--with direct nods to John Cage, Marcel Duchamp, and Donald Judd--in the midst of the Mexican desert. "Is this ghostly geometric figure a lens through which the world can be reinterpreted?" the artist asks. "Or is it the paradigmatic principle of modernist thought that organizes the world around it? Are we inside or outside the cube?" "...I make visible the violent moment in which we live, where we feel that life has no value. It is competition, power, violence, and chaos. The viewer may choose to identify with the powerful or with the vulnerable..."

ABOUT JULIO CÉSAR MORALES
By deploying a range of media and visual strategies, Julio César Morales investigates issues of migration, underground economies, and labor on the personal and global scales. Morales works with whatever medium lends itself to a particular project. He has painted watercolor illustrations that diagram human trafficking methods, employed the DJ turntable, produced neon signs, reenacted a famous meal, all to elucidate social interactions and political perspectives.

His work has been featured in publications, including Flash Art, The New York Times, Artforum, Frieze, Art Nexus, and Art in America. His work is in private and public collections including The Los Angeles County Art Museum, The Kadist Foundation, The San Diego Museum of Contemporary Art, and Deutsche Bank, among others.
Morales was adjunct professor at The San Francisco Art Institute and associate professor in Curatorial Studies at The California College for the Arts. Morales is an advisor and writer for The San Francisco Quarterly Art Magazine; from 2008 to 2012 he was adjunct curator for visual arts at Yerba Buena Center for The Arts in San Francisco. Morales was a contributing curator for the Japanese pavilion at the 2013 Venice Biennale and is currently curator of visual arts at Arizona State University Art Museum.

ABOUT GALLERY WENDI NORRIS
Gallery Wendi Norris presents a contemporary and modern program that showcases artists working over many geographic locations and in a wide array of media. The gallery, located in downtown San Francisco, often shows two exhibitions simultaneously in order to encourage dialogue across practices, often connecting a modern with a contemporary artist. Gallery Wendi Norris is active locally as well as internationally, working with collectors and museums alike in both primary and secondary markets. Founded with an emphasis on scholarship and education, the gallery produces researched exhibition catalogues, sponsors artist talks, hosts visiting academics, and engages in local public art projects, among other initiatives. Learn more at gallerywendinorris.com.