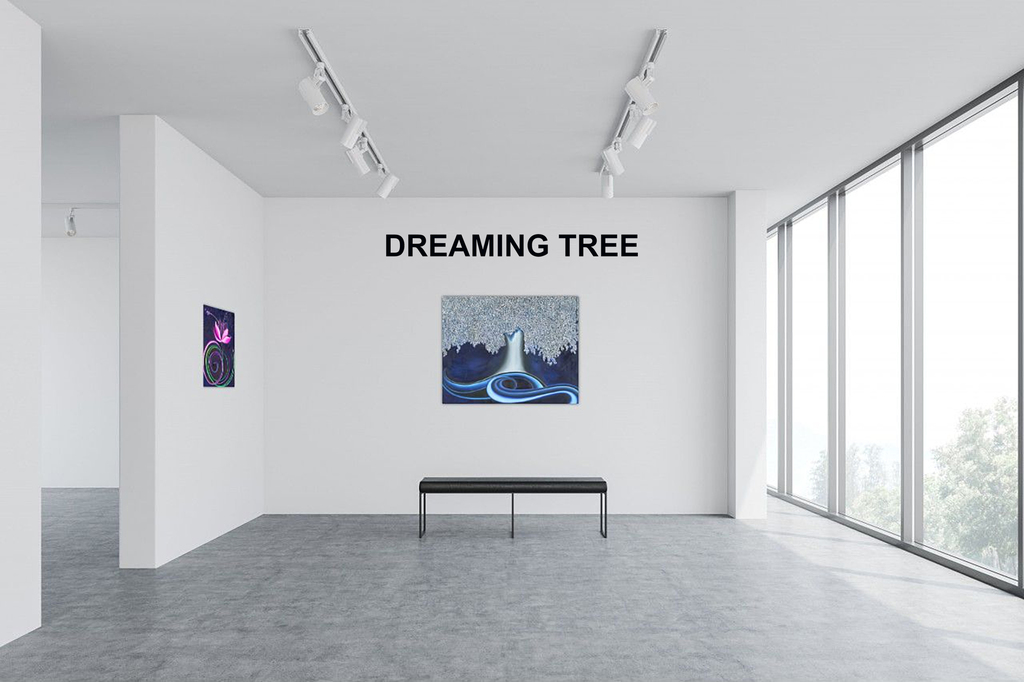 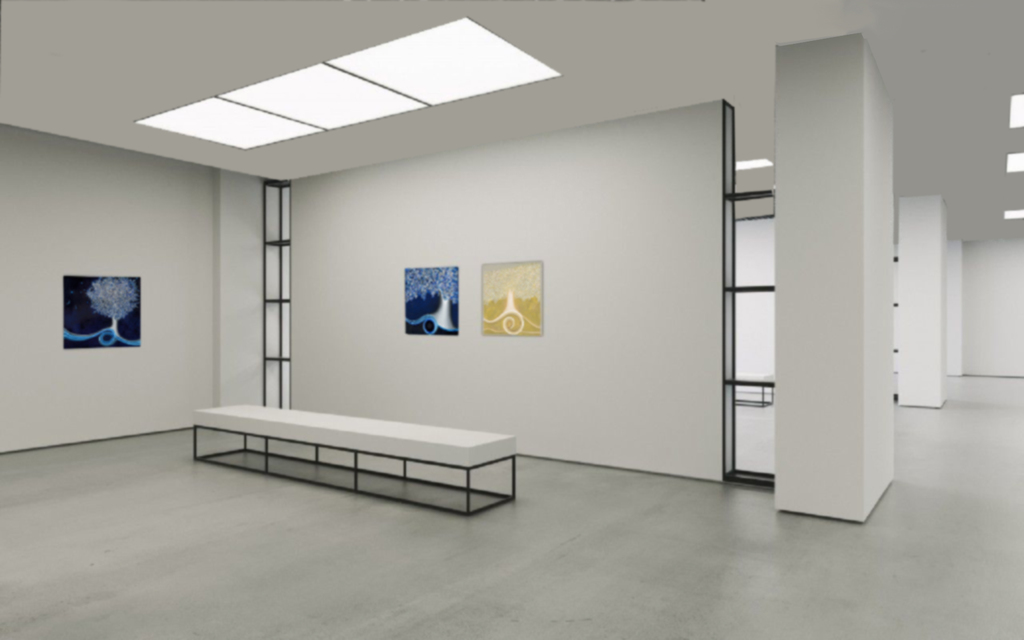 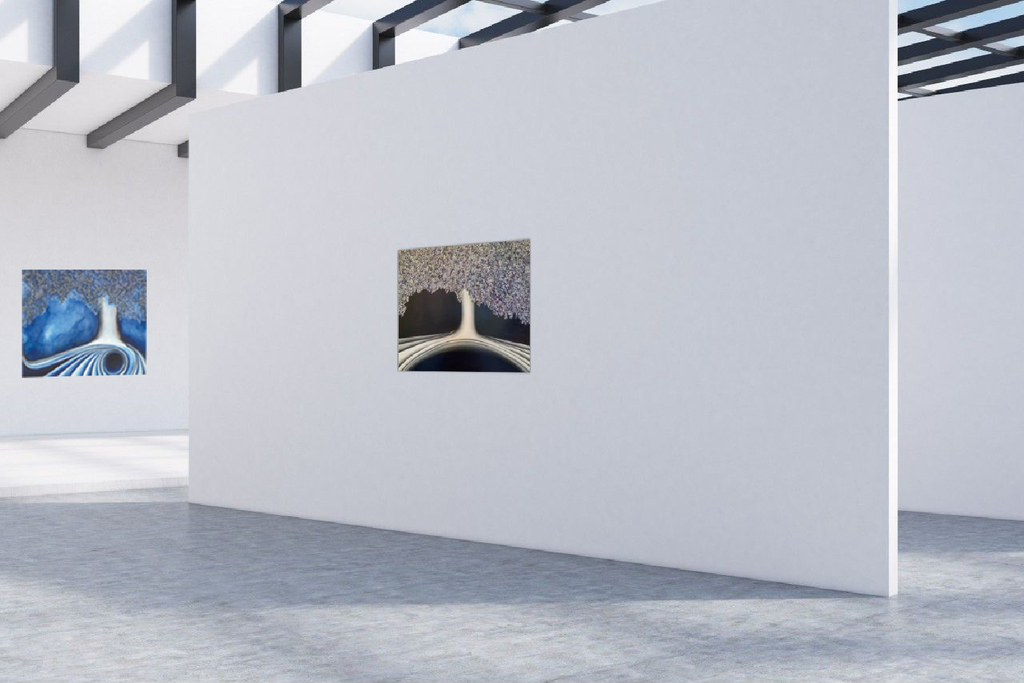 Gallery13 invites you to view ‘Dreaming Tree’ featuring new works by American artist Rachel Tribble. Rachels Tree Series comes from a desire to “find a place of calm and peace and understanding of how we experience the relationship between a connection we have with the Earth and our connection to our inner and outer worlds: "a meditative space where one can enter and come to a full realization that human beings and the earth are all one."

Tapping into the unconscious using meditation to gain spiritual insight is a basis for this artists' creative practice. The Surrealists were proponents of using automatism as a means to unleash the ultimate creative, meditative, source, through the unconscious. Tribble uses this technique as part of her meditative practice, painting in the dark, following a tonal quality in music in order to subvert the cultural, intellectual and historical constraints and unlock spiritual creativity. The artists' works are about tapping into that ‘dreamscape’, that other dimension where energy, fluidity, and peace merge with the landscape.

Rachel Tribble's painting style is in the pursuit of detail using a deep, sensual, color palette depicting an abstract tree over a wave of water: a beautiful age-old reference to the natural world. In evidence, is the immensity of the artist's tree, filling the canvas, the trunk, thick and smooth topped off with an intricately, detailed, spread, of leaves. Below the tree, there is water painted as a long, smooth, blue chroma, curve-o-linear progression. The tree appears to be floating or drawn along this flowing stream which defies gravity as it loops and curls in a continuing stream of color. Rachels Trees are dreamscapes and a product of her meditative practice. There is a distinct understanding that what you see is a tree and water but the space in which her trees exist is not found in the real world. Rachel often crushes metals, like gold and silver, into her paint because it heightens the colors. “It’s the only way she can convey the colors she sees in her dreams, those colors are always glittery and unlike the color spectrum of the waking state.” Each of her pieces has a sense of circular, spiraling, unfurling. There are quite rhythms and colors that are a reflection of artists who had directly influenced her work, artists like Pollock, Rothko, and 'Ladders' by O’Keeffe.

Rachel Tribble's portfolio is entirely elemental: Trees, Water, and Sky. The artist’s clear adoration for her subject is evidenced by her desire to exhibit these elements as empirical symbols that elevate the importance of the environment. The representation of trees and water by the artist is an act of quiet activism designed to encourage the viewer to contemplate her compositions and embrace the content of her work. Consider the state of our world environment and the amount of clear-cutting and billions of tons of carbon our stratosphere: a hard reality. Trees and water are the basis of our very existence and without, humanity is either severely diminished or extinct. Artists like Rachel tribble create environmentally conscious works in the hope that there is a mass transference of the clear and present danger of global warming and the urgency for human intervention to preserve the planet.

Rachel began her art education at Syracuse University and The National Academy of Design in New York. Her education was instrumental in her development as an inter-media artist starting as a designer and moving to performance-based art in the Minneapolis club scene of the 1990s. During her education, Rachel felt “boxed in” by her classes and her school. She found her freedom in the New York club scene of the late 1980s. And in the early 1990s where she found the emerging Minnesota music scene. Rachels’ social activism became more grounded after living on and working with the Anishinaabe (Ojibwe) tribe on their Reservation in Northern Wisconsin working to bring economic change to tribal people. The practice of meditation has been a lifelong pursuit that began with her participation in the ceremonies of the Native American people where she found her ‘path to meditative practice. Rachels passion for the environment led her to be invited into an Anishinaabe (Ojibwe) Reservation where she witnessed poverty, “that shook me to my core.” She gave up the full-time life of an artist and began working in economic development and finance for tribal communities and went on to co-found a non-profit organization called The Association for Tribal Heritage to help bring educational programs and other needs to the reservations. After years of working with the Anishinabe and taking what she learned about our environmental responsibility to the planet and her meditative practice, Rachel used what she learned about meditation and our need to be environmental responsibility and poured her experiences and understandings of native peoples into her paintings.

Rachel's work has been featured in galleries, shown at the Miami Art Week, her work has been featured in books, has been published in Huffington Post and many mother publications in the U.S. Her work has been gifted to nominees of the Academy Awards, the Emmy Awards, and the MTV Movie Awards. Her work for the Epcot International Flower and Garden Festival Poster at Walt Disney World won the IFEA Gold PInnacle Award for the Walt Disney Company and she has also been awarded the Atlanta Design Center's Visual Display Award and through Rachel's long relationship with Disney, she has become a Disney Master Artist.