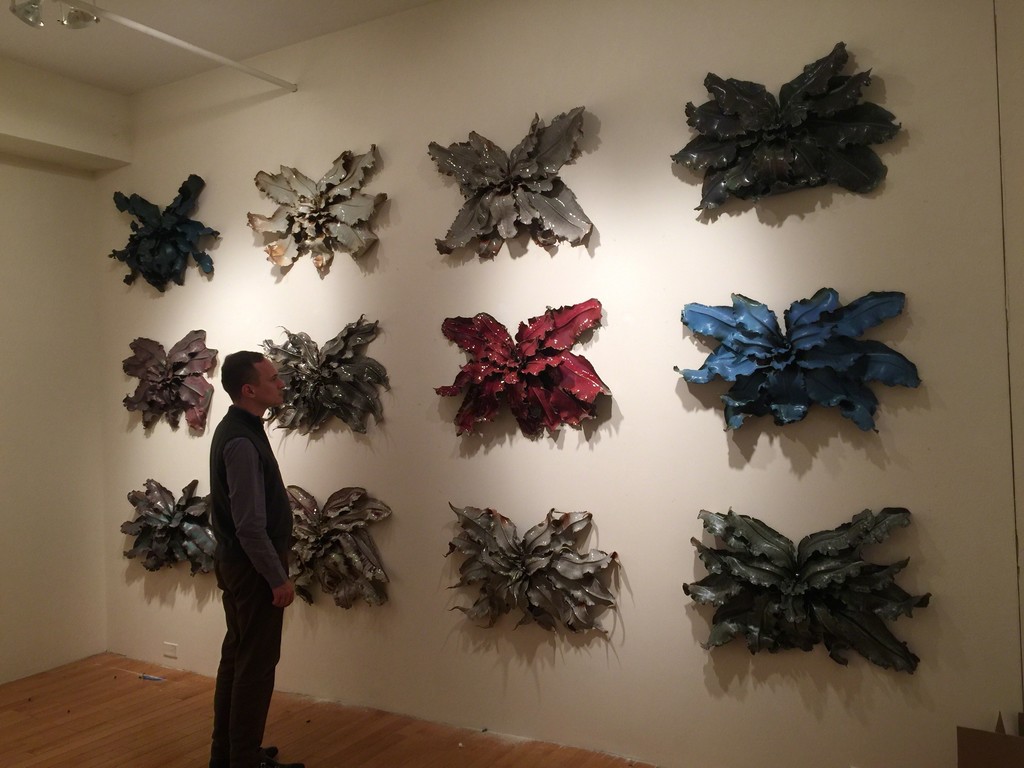 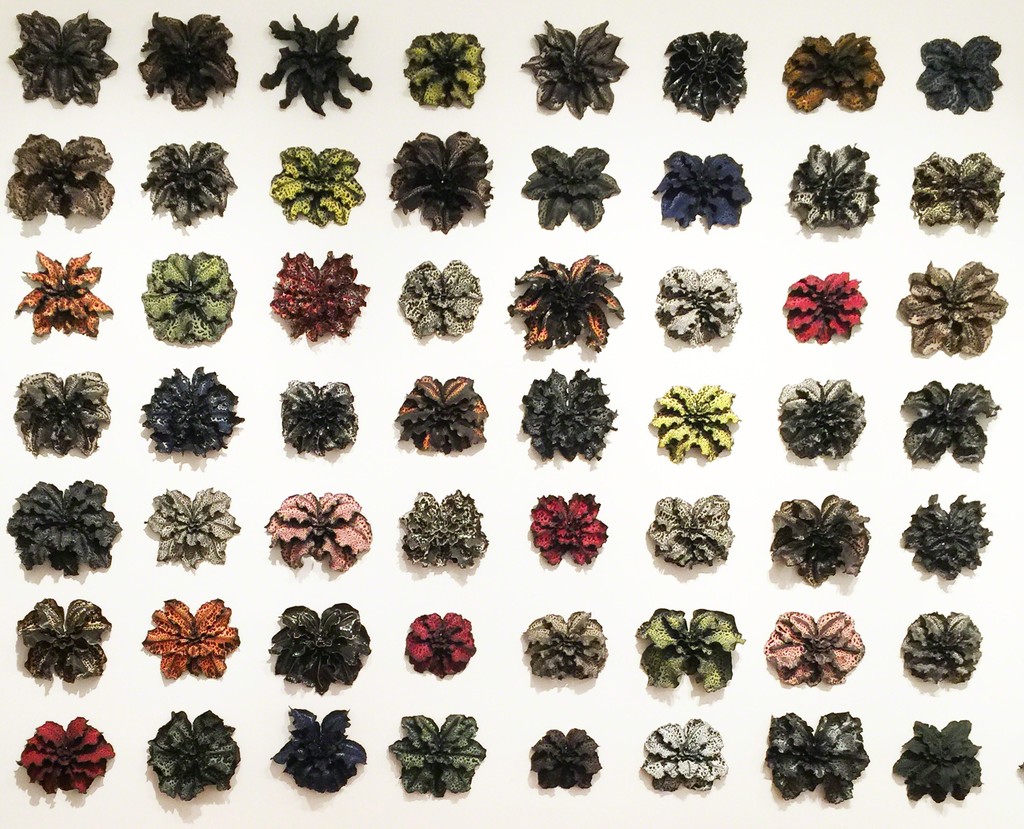 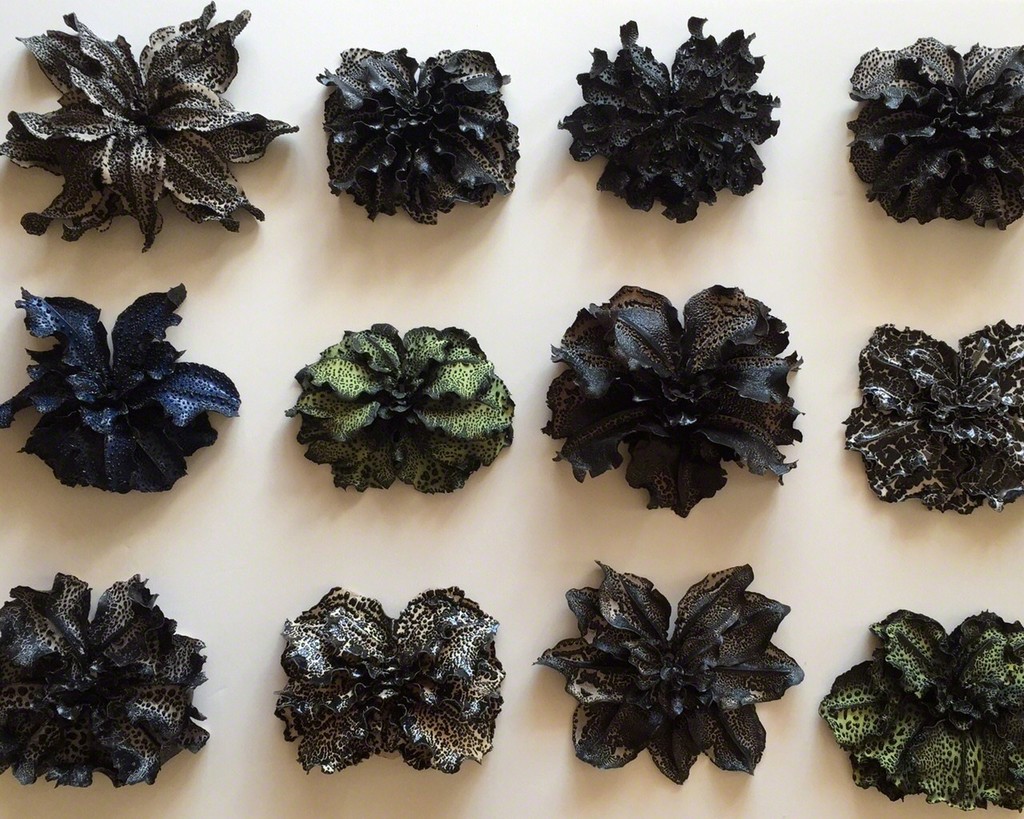 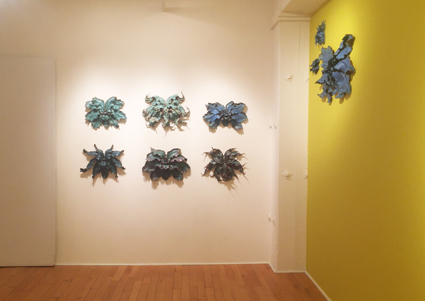 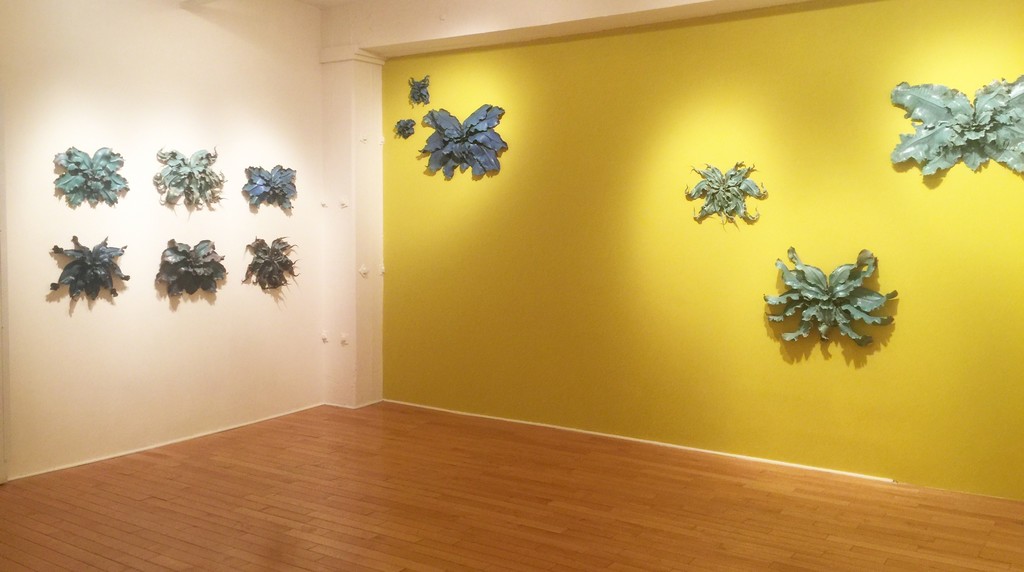 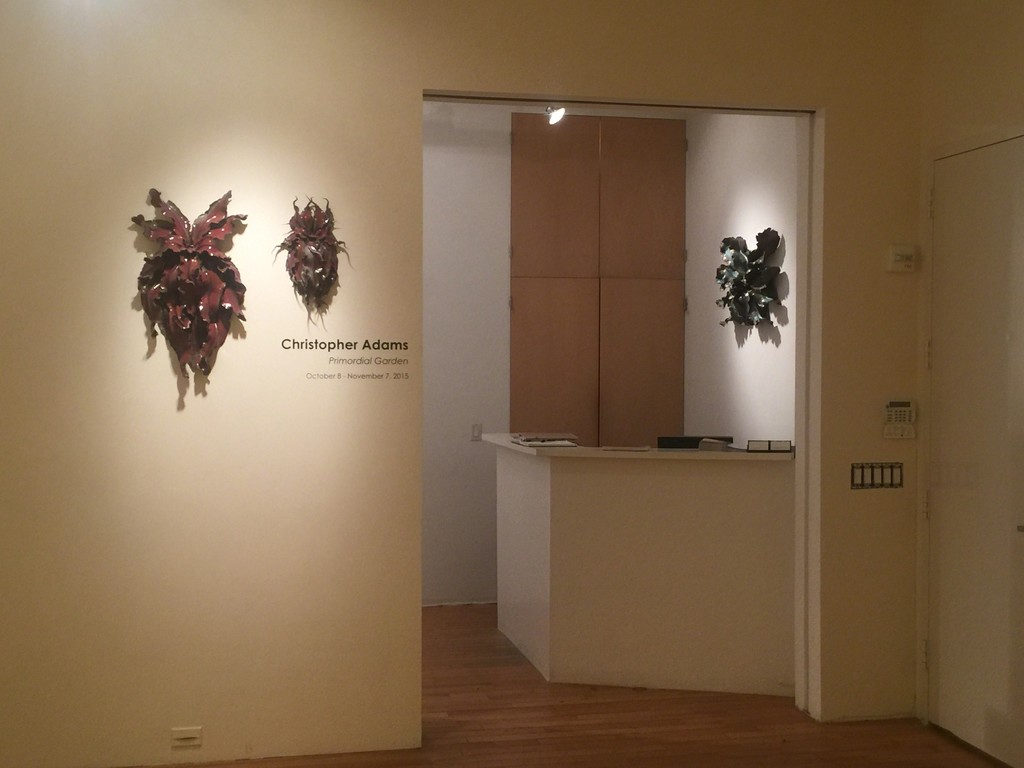 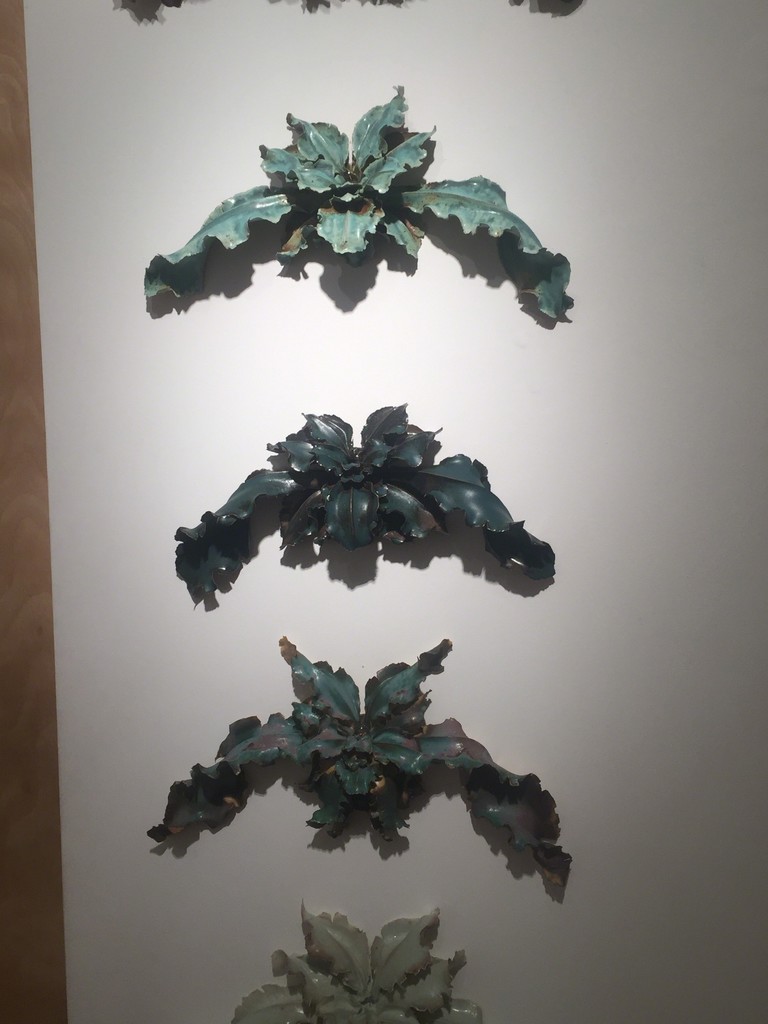 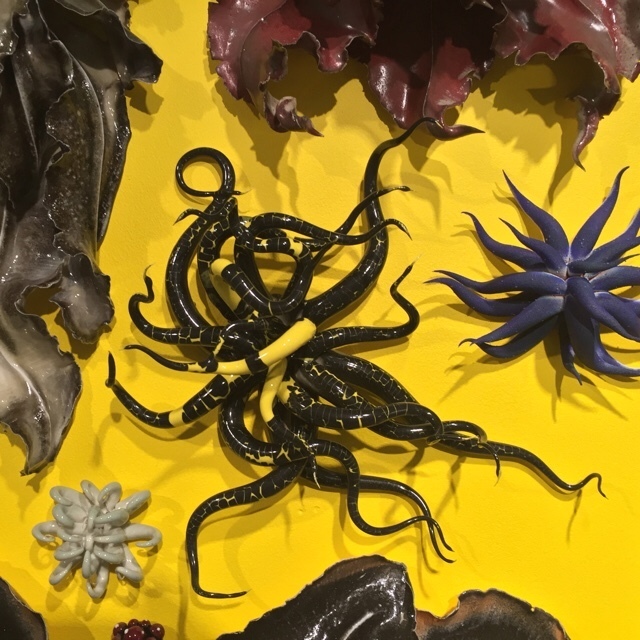 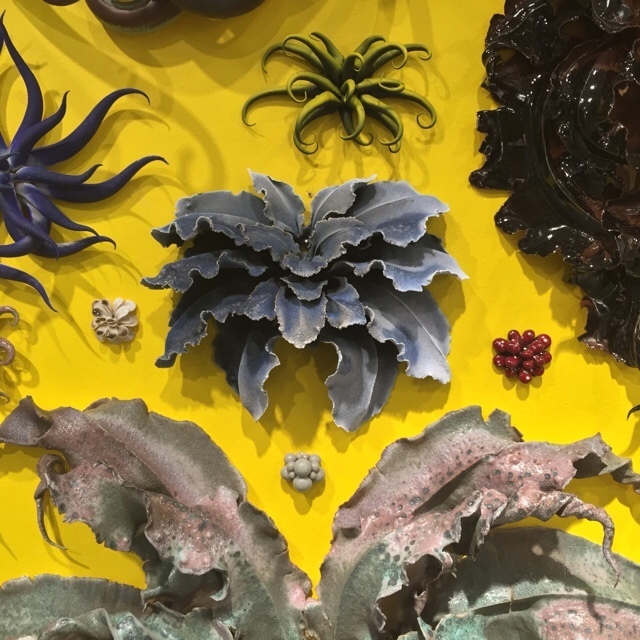 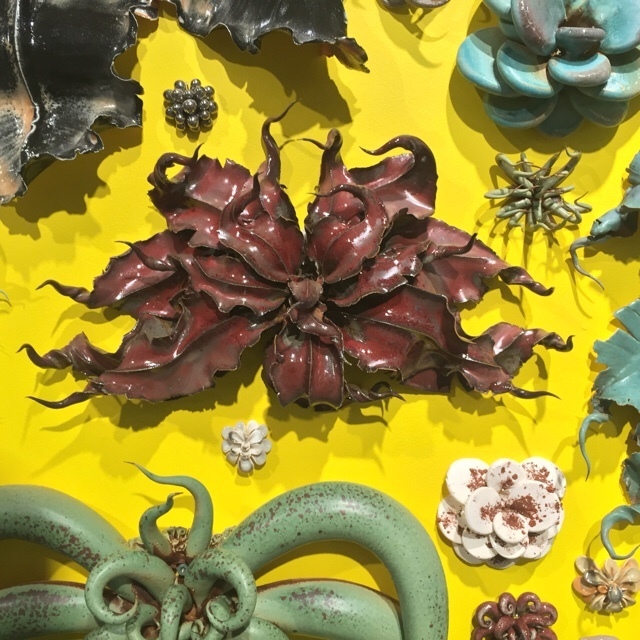 The Opening Reception will take place on October 8, 6-8pm. The artist will be present. RSVP to [email protected]. (Members of the Press welcome early at 5:00 without reservation.) The exhibition will run through Saturday, November 7, 2015.

Christopher Adams creates sculptures that play on biological concepts, specifically adaptive radiation, whereby a pioneering organism enters an untapped environment and then differentiates rapidly without departing too much from its original form. His sculptures suggest varieties of creatures, but not necessarily a specific organism. Many works in the exhibition, Primordial Garden, are suggestive of plant life with leafy tendrils and frayed edges. The installation implies a Darwinian evolution, with the creatures fewer in number and larger in form than in his previous shows, the largest approaching 3 feet in length.

Christopher Adams merges his deep understanding of biology and ceramic surface to create a variety of ever-evolving finishes on his sculptures. A sense of play is ever apparent in the work (what the artist calls “promiscuous glazing”) as he manipulates the colors and textures of his ceramic organisms.

Christopher Wade Adams began experimenting with ceramics in high school. He has developed a richly varied series of abstracted biomorphic forms. Each series grows out of an evolutionary process parallel to the science that informs his work. By continually recombining forms and experimenting with glazing beyond traditional ceramics practices, Adams has created a remarkable body of work that breathes new life into an ancient medium. Creeping tendrils, twisted leaves, cartilaginous growths, and knotted rock shapes inhabit the walls with a beautifully primordial presence.

Adams made his public debut at the Scope New York art fair in March 2006 to rave reviews and a sold-out booth. In reviewing the fair, Ken Johnson of The New York Times described Christopher’s sculptures as “wonderfully delicate, spiky objects that look like specimens of underwater flora and fauna from another planet.” The artist’s recent exhibition at Harvard University, Life or Something Like It, included 1,000 works. The artist’s Summer 2013 exhibition at Greenwich House Pottery (where he did a 10 month residency) also included a vast amount of work, installed floor to ceiling along a 25’ wall.

ABOUT GARVEY | SIMON ART ACCESS
Garvey | Simon is a contemporary art gallery with a special focus on drawing, works-on-paper, unusual materials and design. Our art advisory service, founded in 1999 by Elizabeth K. Garvey, specializes in American, Modern, and Contemporary Art.

For more information about each artist or high-resolution images, please contact Elizabeth Garvey at 917-796-2146 or [email protected]