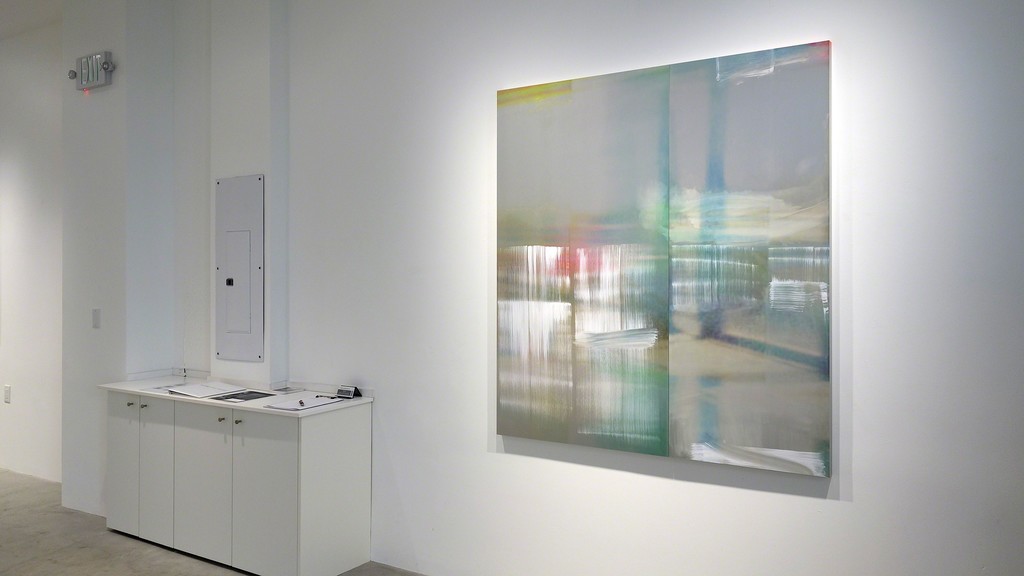 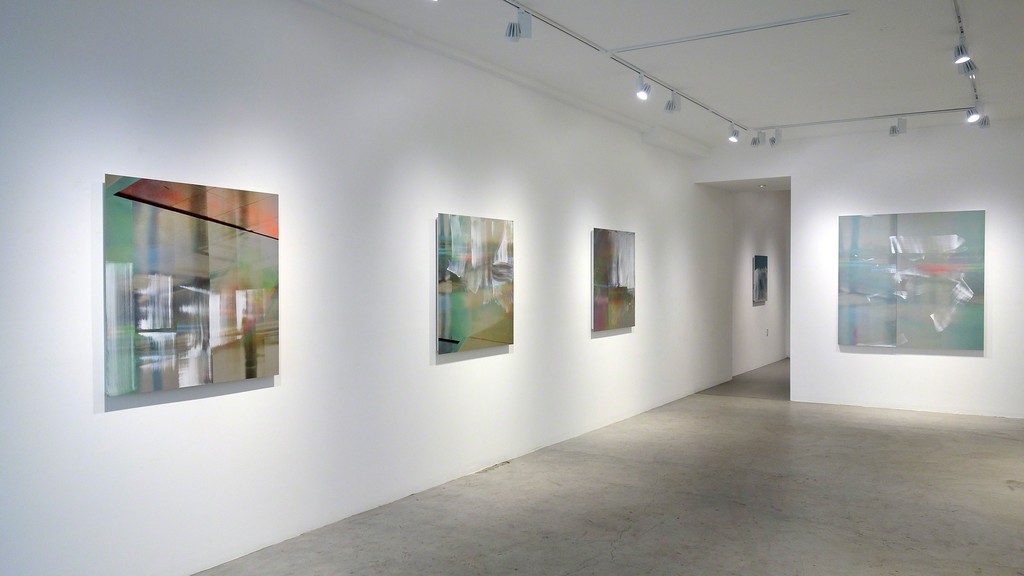 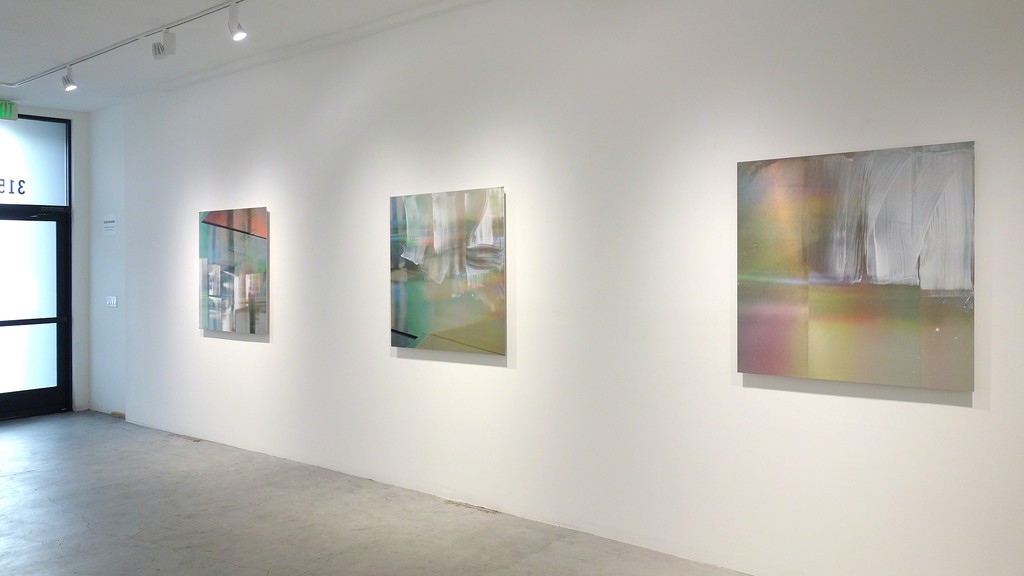 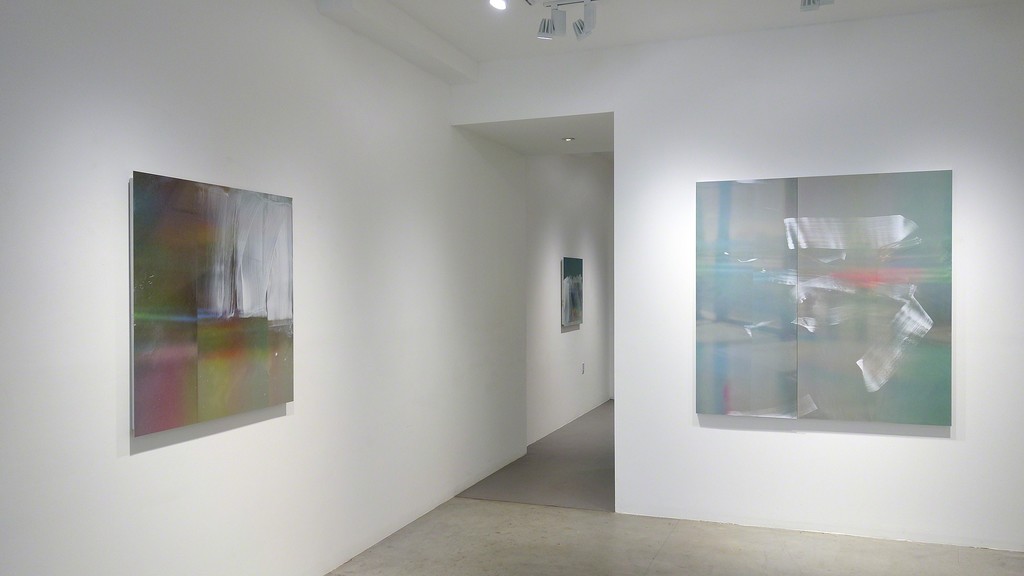 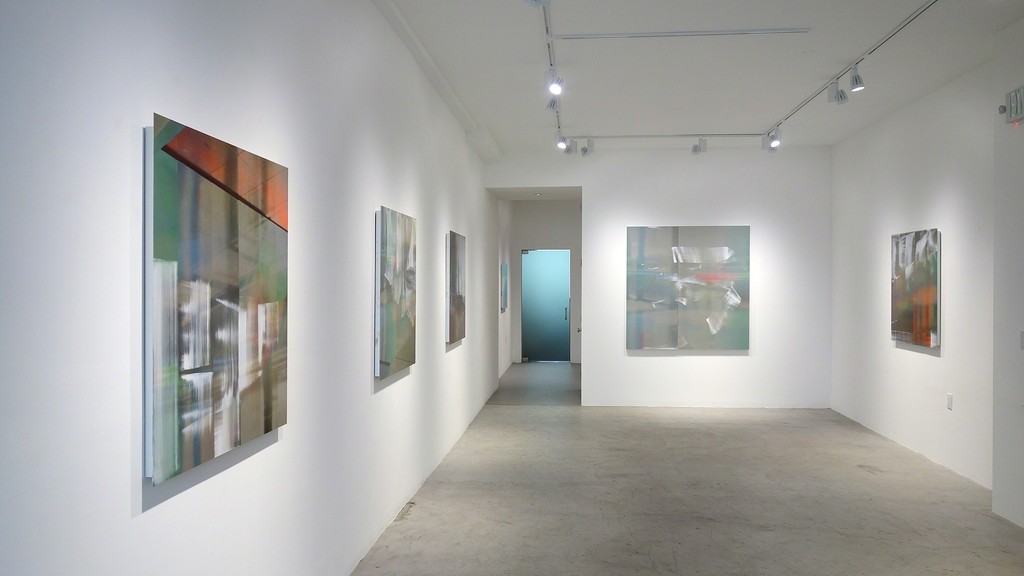 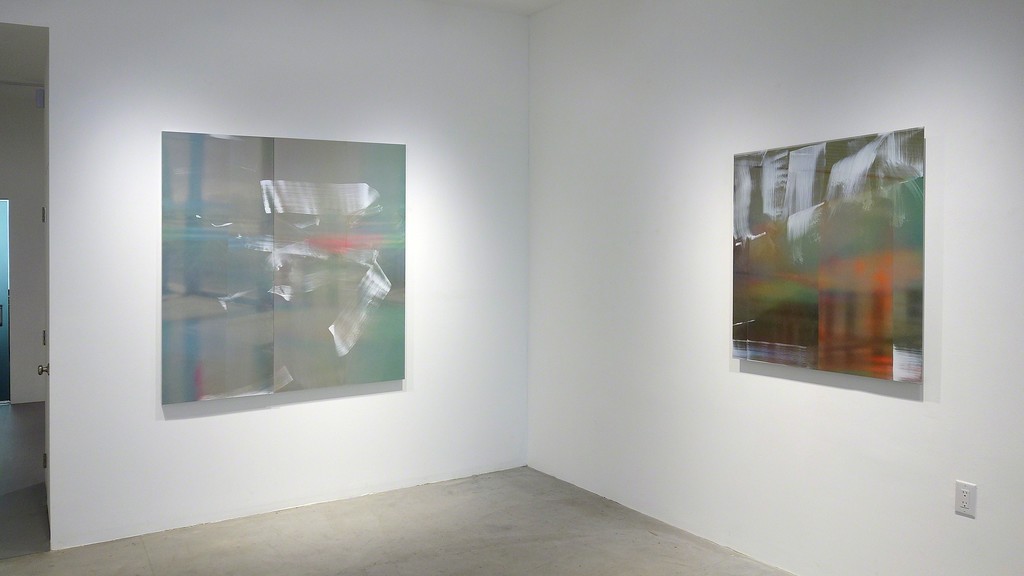 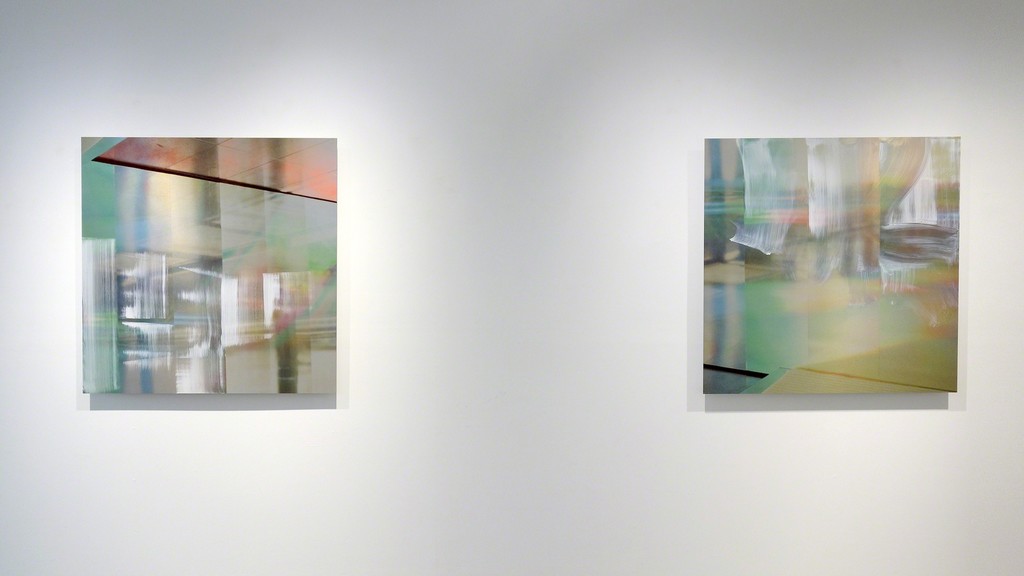 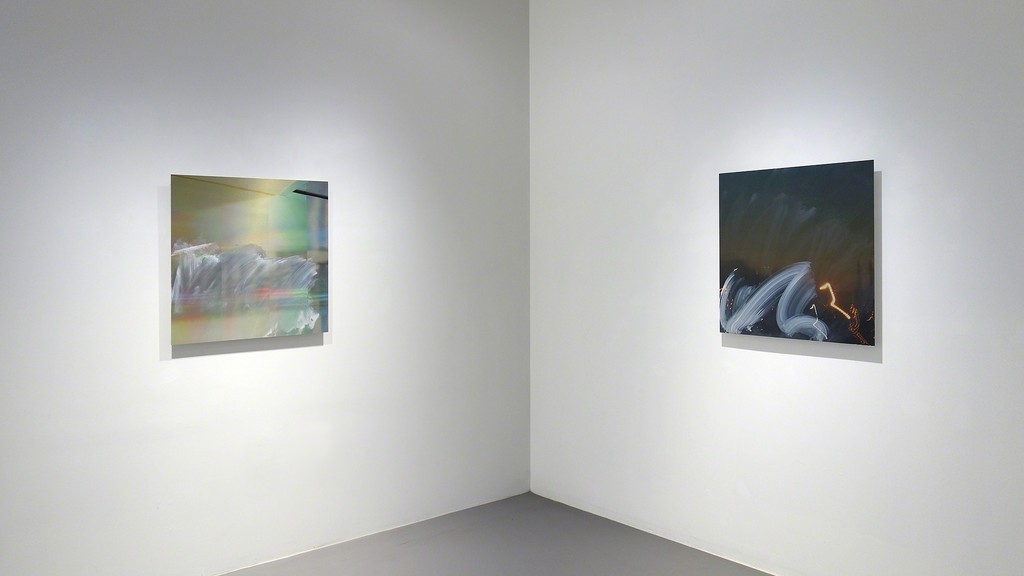 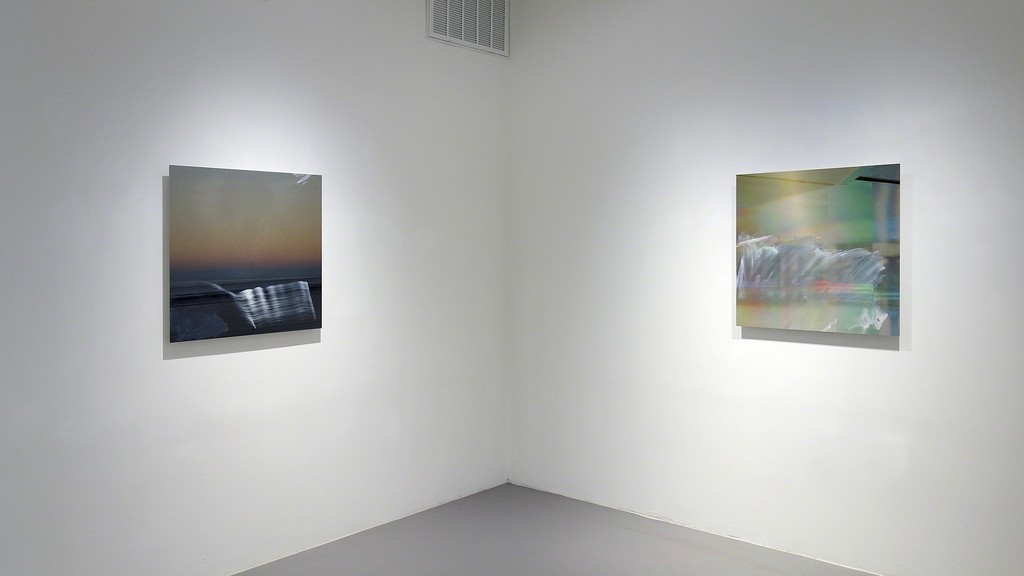 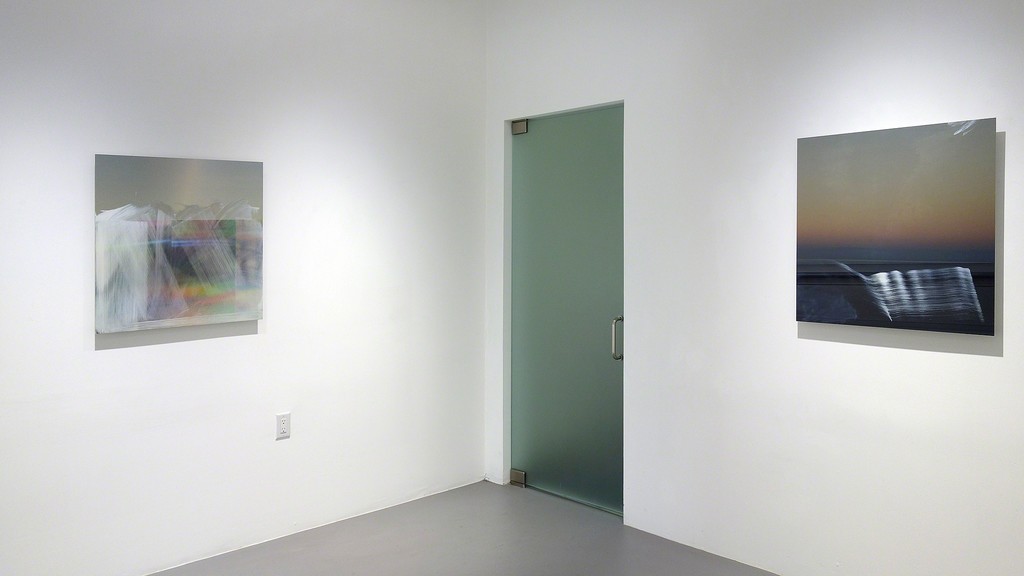 New paintings from Justine Frischmann’s “Lambent” series will be on view at George Lawson Gallery from April 13–May 28, 2016. An opening reception will be held at the gallery, located at 315 Protrero Avenue, on Saturday, April 16 from 4–6 pm.

Coming fresh on the heels of Frischmann’s solo presentation at the VOLTA NY art fair, the gallery exhibition will reprise some of the work shown in New York along with more recently completed paintings utilizing a diptych format and increasing the scale of her panels. Frischmann exploits the juxtaposition of media—spray paint and photography—along with the mirrored surfaces of her aluminum supports, to extend the formal reach of gesturally applied oil paint. The result is a voluminous space that seems to source the light rather than reflect it. With minimal interference, she triggers complex interactions that traverse worlds not often associated together: urban architecture, coastal fog, celebrity glare and meditative quietude. She does so with a mindfulness towards painting's deep history and its place in relation to popular culture, as technological and readily distributed as it has become. Frischmann's imagery plays with time. Something in the light coming off her surfaces preserves what is perennial in the human response while resonating in an immediate way to the pace of contemporary focus. Lambent means marked by lightness or brilliance, especially of expression. Frischmann's paintings are aptly named.

About Justine Frischmann
Justine Frischmann was born in London, England in 1969 and now lives in the San Francisco Bay Area. In 1989, she received a BSc from the Bartlett School of Architecture at University College London. In 1992, she founded Elastica, a well-known British rock band and performed for 10 years. In 2005, she attended Naropa University in Boulder, Colorado. Frischmann has been included in numerous exhibitions including: Justine Frischmann, George Lawson Gallery, San Francisco, CA, Summer Invitational, Life on Mars Gallery, NY, NutureArt, Bernaducci Meisel Gallery, NY, The Battle of Faith and Doubt, Unspeakable Projects, San Francisco, CA, What I Like About You, Parallel Art Space, Brooklyn, NY, and Emerging Artists of the Bay, Marin MOCA, CA. In 2013, she was shortlisted for the Marmite Prize for Painting.